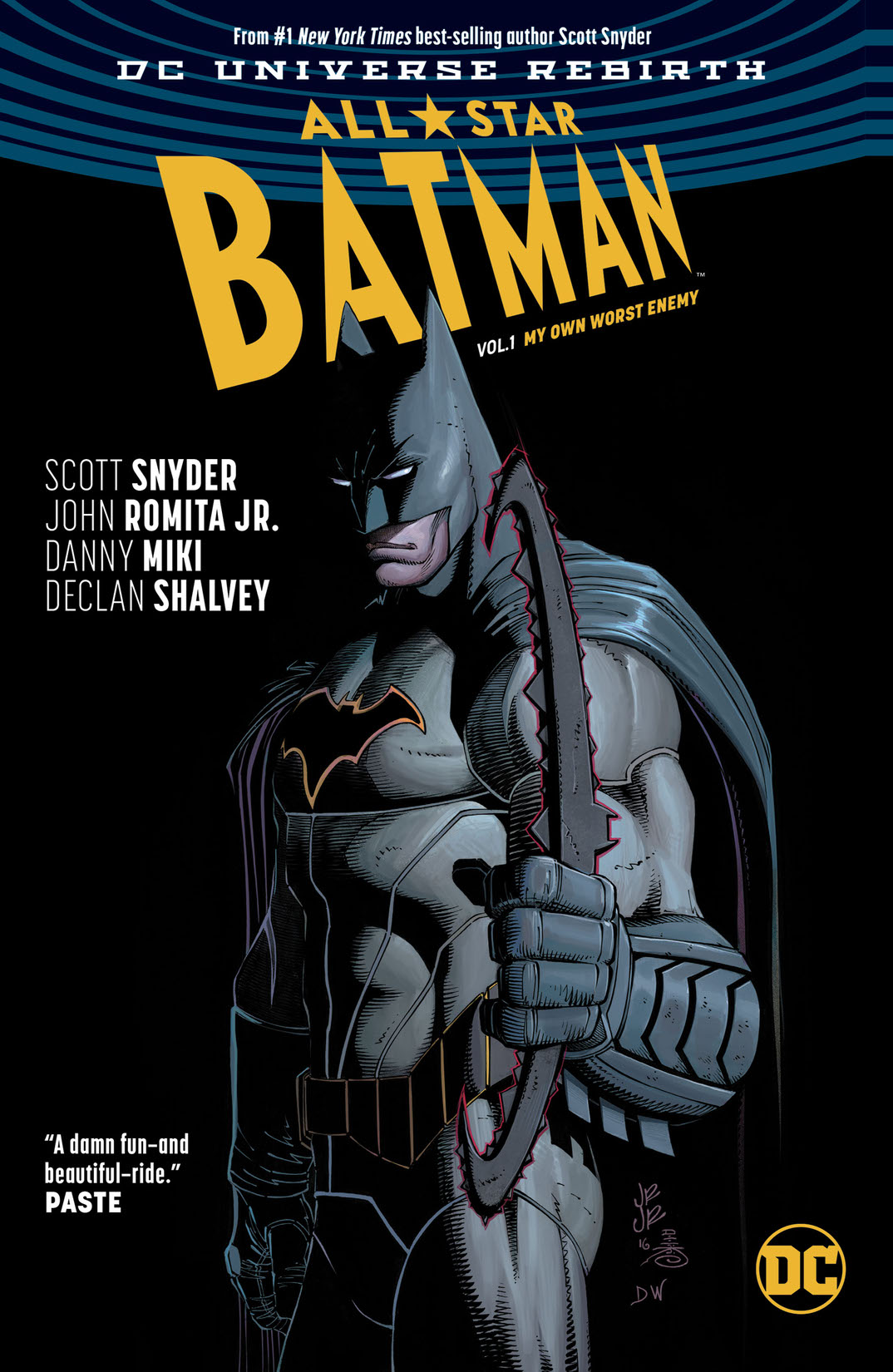 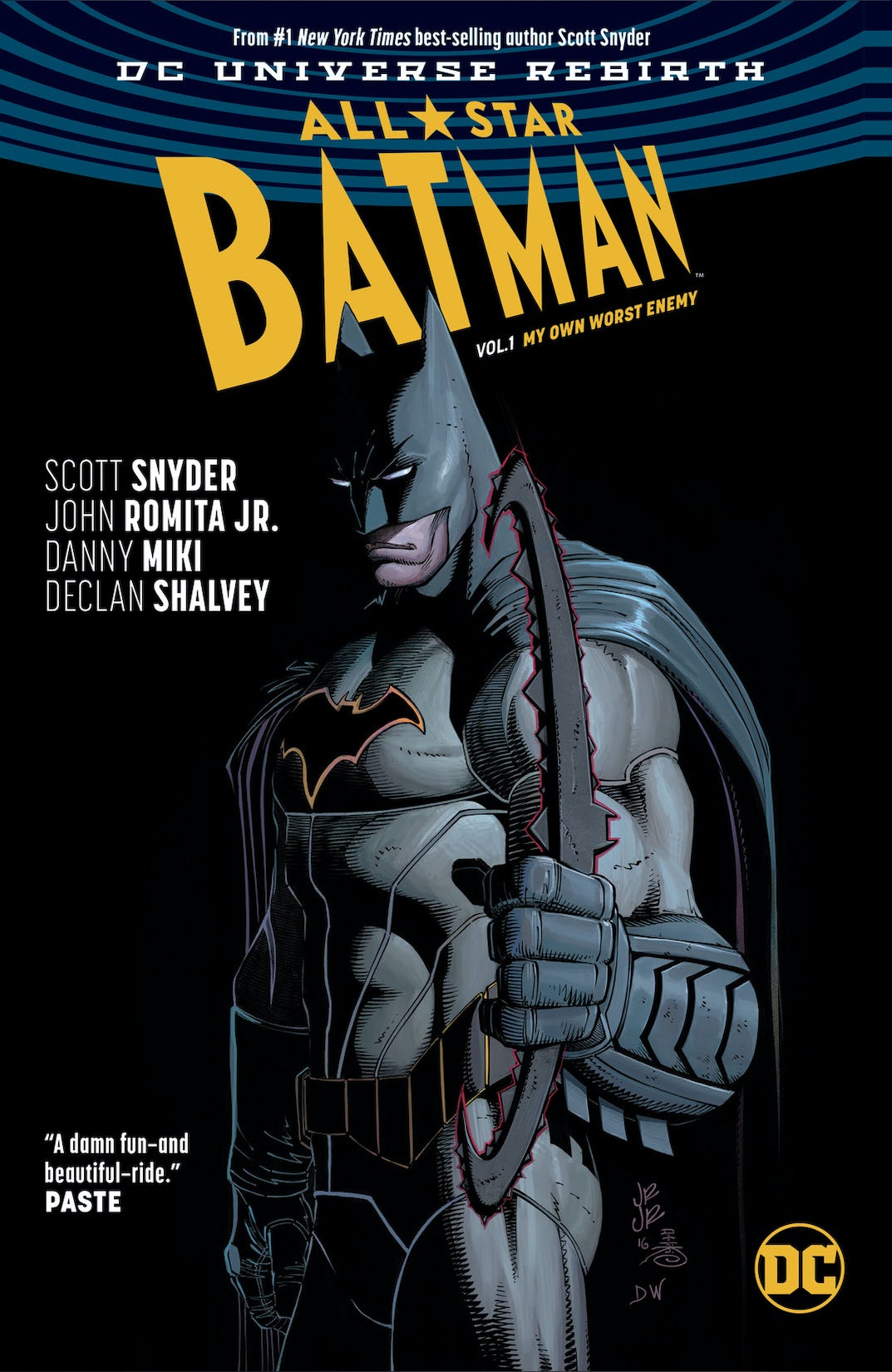 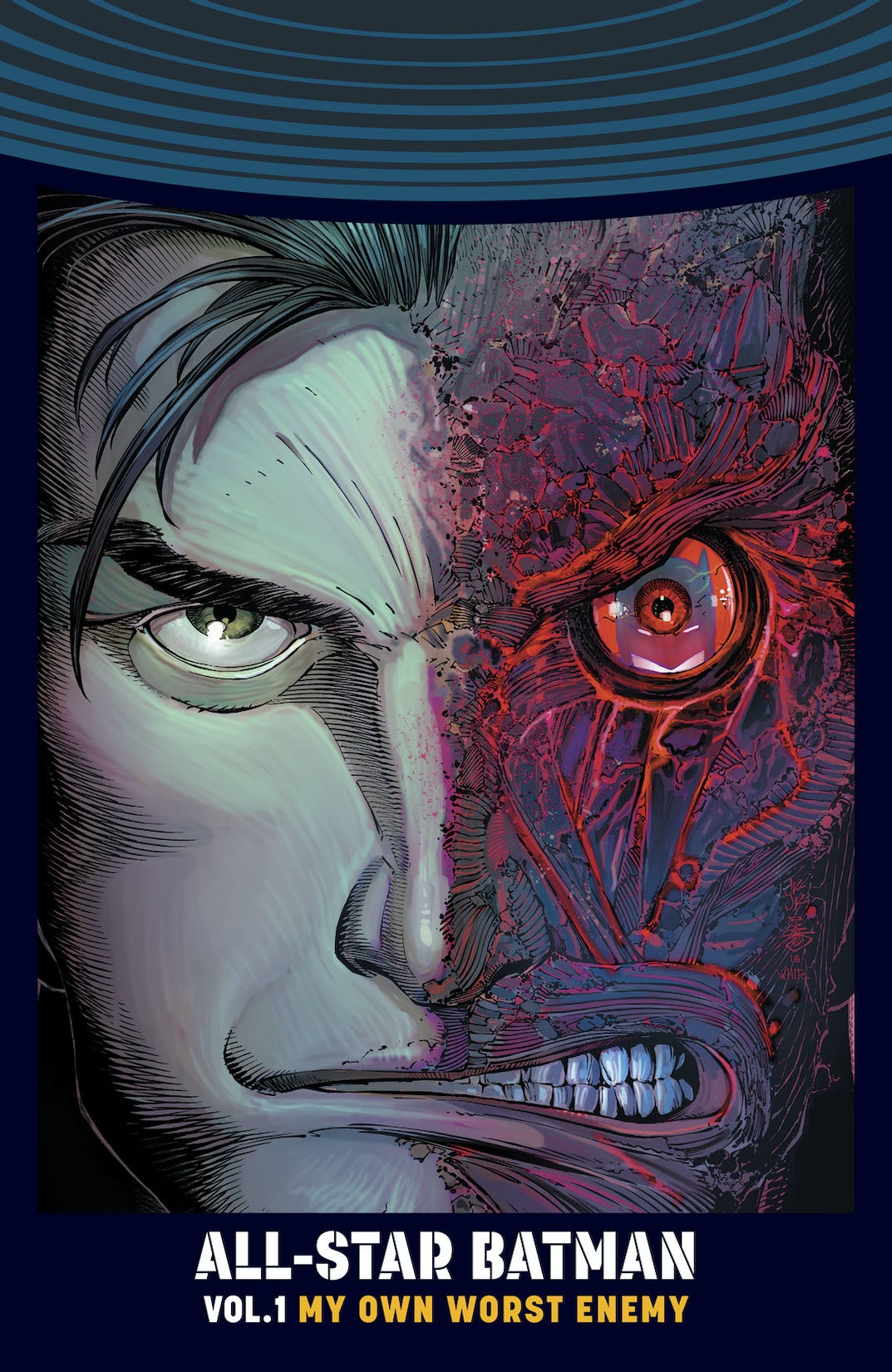 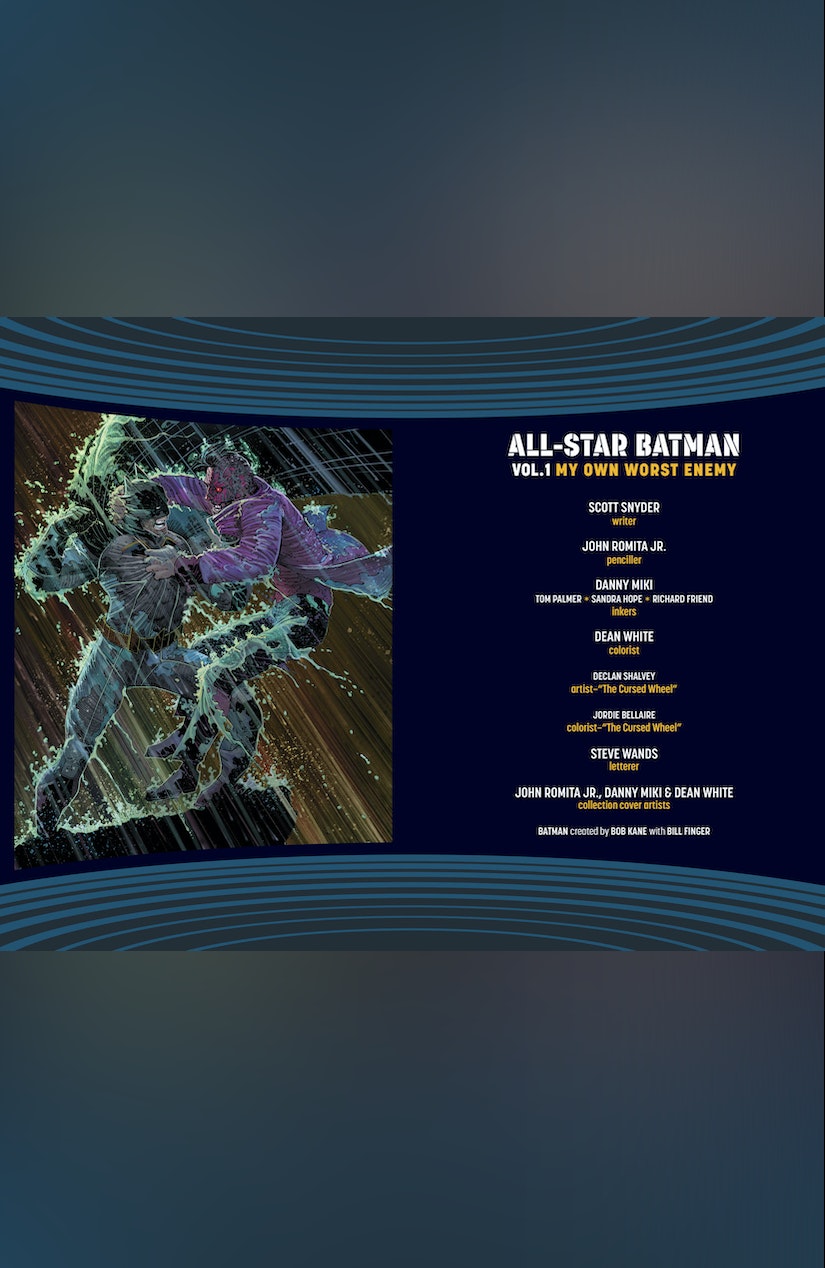 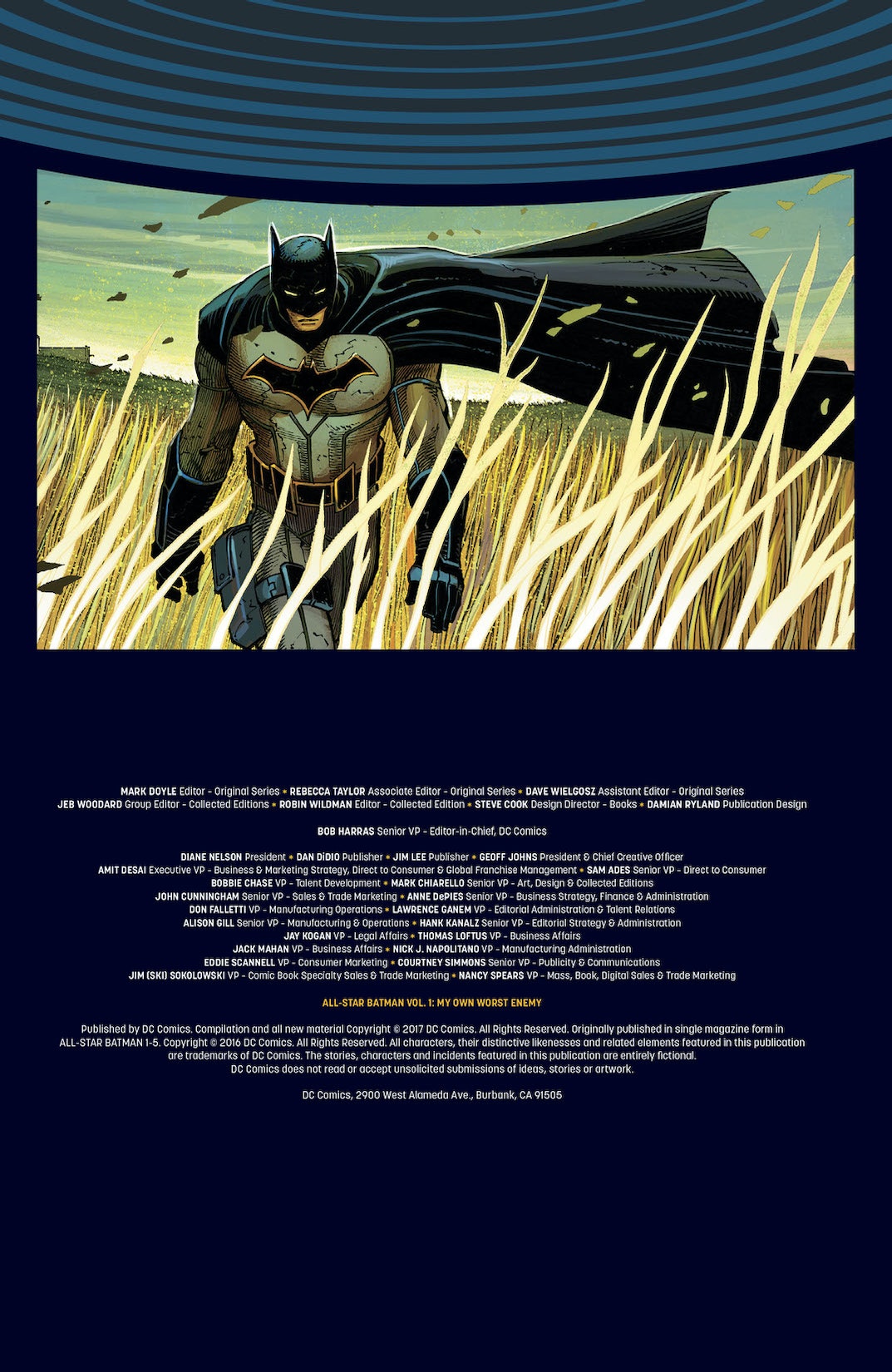 All Star Batman Vol. 1: My Own Worst Enemy

All Star Batman Vol. 1: My Own Worst Enemy

From the #1 NEW YORK TIMES bestselling author of BATMAN, Scott Snyder, comes his newest Dark Knight project as a part of DC Universe Rebirth, ALL-STAR BATMAN VOL. 1: MY OWN WORST ENEMY! Snyder is one of the most critically acclaimed authors in the comics world, with titles that include the genre-defining BATMAN VOL. 1: THE COURT OF OWLS, as well as BATMAN: BLACK MIRROR and AMERICAN VAMPIRE. But this time, he teams with Eisner Award-winning illustrator and comics legend John Romita Jr. (AVENGERS, THE DARK KNIGHT RETURNS: THE LAST CRUSADE) and critically acclaimed artist Declan Shalvey (MOON KNIGHT)! In this new graphic novel, Batman finds himself trying to help old friend Harvey Dent…now known as the villainous Two-Face! The Dark Knight accompanies his foe on a cross-country trip to fix his scarred face and hopefully end the Two-Face identity forever. But when the former Gotham City D.A. sets a plan into motion to free himself, the road gets bumpy and every assassin, bounty hunter and ordinary citizen with something to hide comes out in force with one goal: kill Batman! Handcuffed together on the road to Bat-hell, this is Batman and Two-Face as you’ve never seen them before! Following the success of COURT OF OWLS, DEATH OF THE FAMILY and ENDGAME, ALL-STAR BATMAN VOL. 1: MY OWN WORST ENEMY is the industry-shaking graphic novel for the Dark Knight, with one of the biggest creative pairings in DC Comics history sharing their take on one of the greatest heroes ever in ALL-STAR BATMAN VOL. 1! Collects issues #1-5.