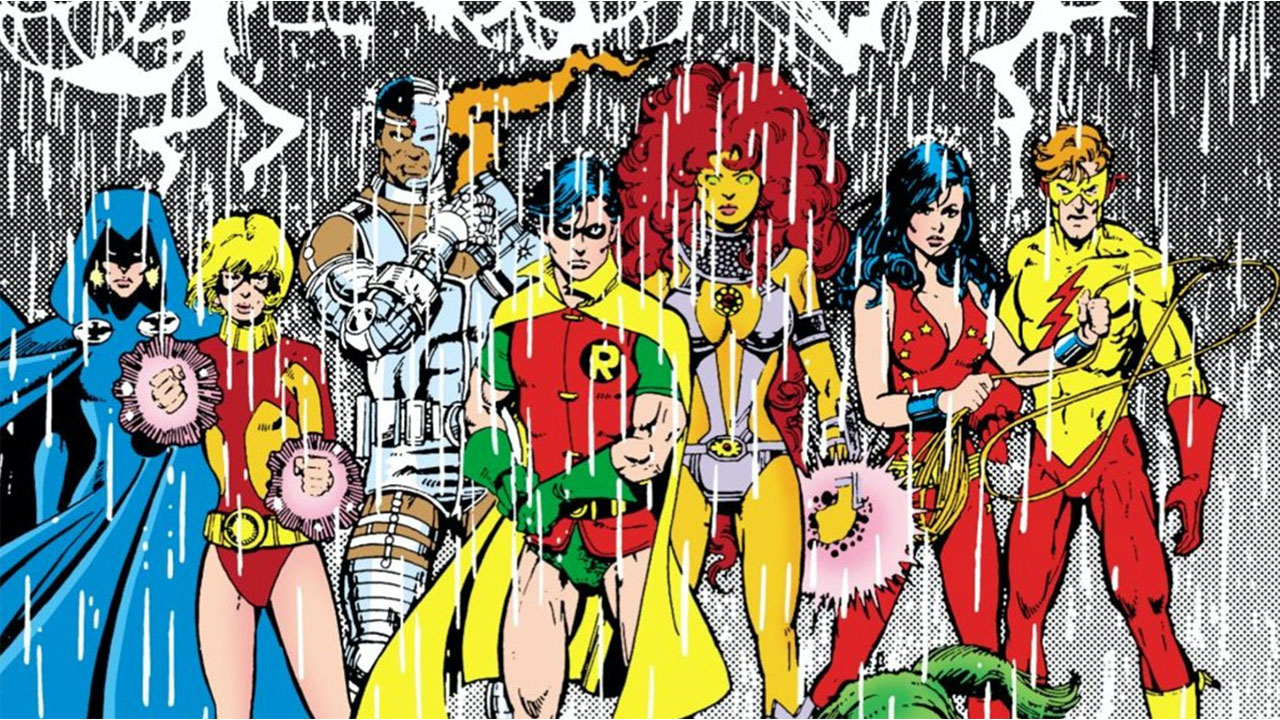 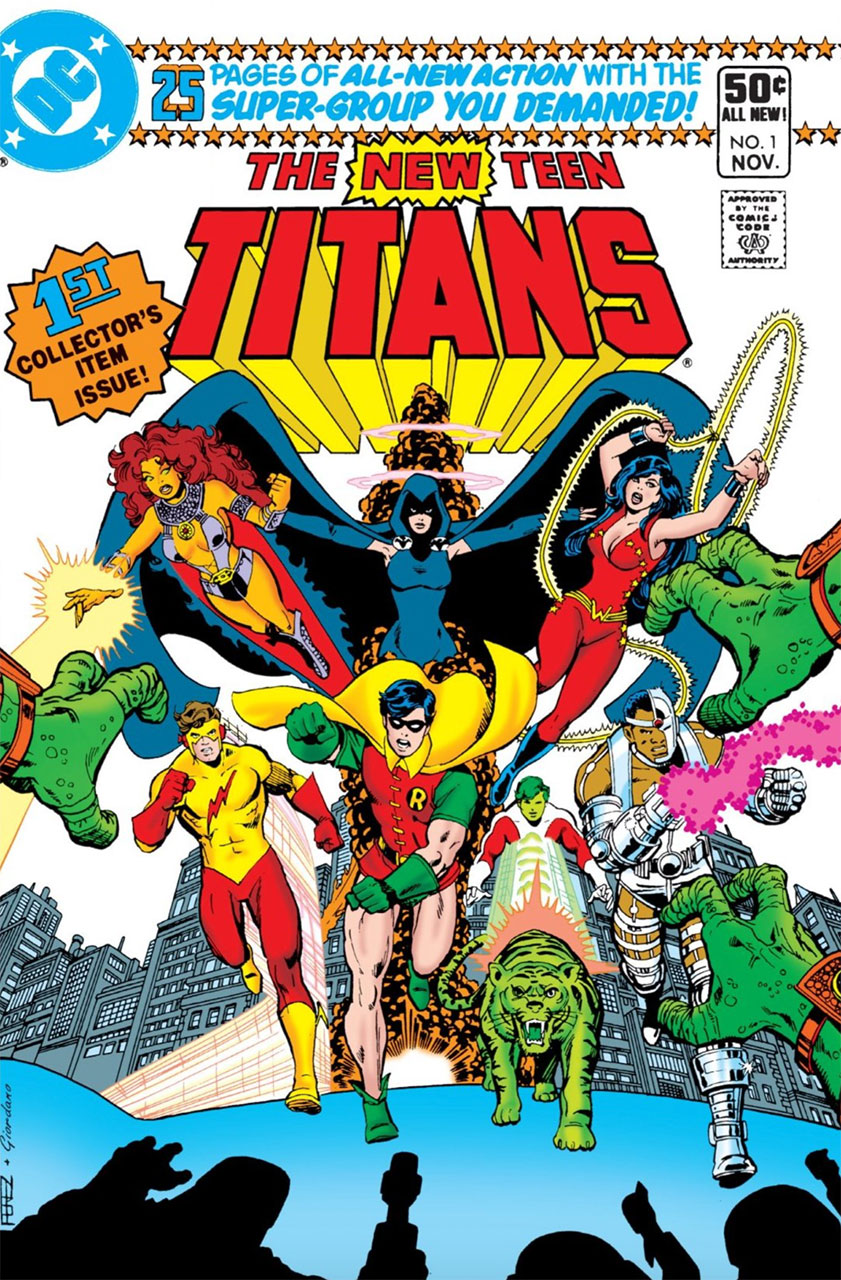 And what a saga it was! With The New Teen Titans, Wolfman and Perez took a handful of tried and true young heroes -- Robin, Wonder Girl, and Kid Flash (all of whom were founding members of the original Teen Titans) – and combined them with three all-new characters -- Cyborg, Starfire, and Raven – each of which brought something unique to the table. Cyborg added the elements of cutting-edge technology and robotics to the stories while Starfire contributed a world of space opera, alien empires, and galactic wars. Raven was a gateway to stories involving magic and the supernatural. Then there was Beast Boy, now calling himself Changeling, who became the heart of the group, as well as its comic relief. Combined, they became one of comics' most perfectly balanced team line-ups of all time.

The New Teen Titans did stories the likes of which superhero comics had never seen at the time. Instead of fighting off generic villains, the team's worst enemies hit much closer to home, as they tended to be actual family members. The heroes were first brought together by the mysterious Raven, to fight off her demonic father Trigon (whom they met in The New Teen Titans #5). Starfire's renegade sister Blackfire (introduced in The New Teen Titans #23) also posed an ever-present threat, and Changeling's stepfather Mento grew into a perpetual thorn in their side as well (in The New Teen Titans #14). This all created an element of family drama that added rich layers to the storylines, some of which would play out for years. 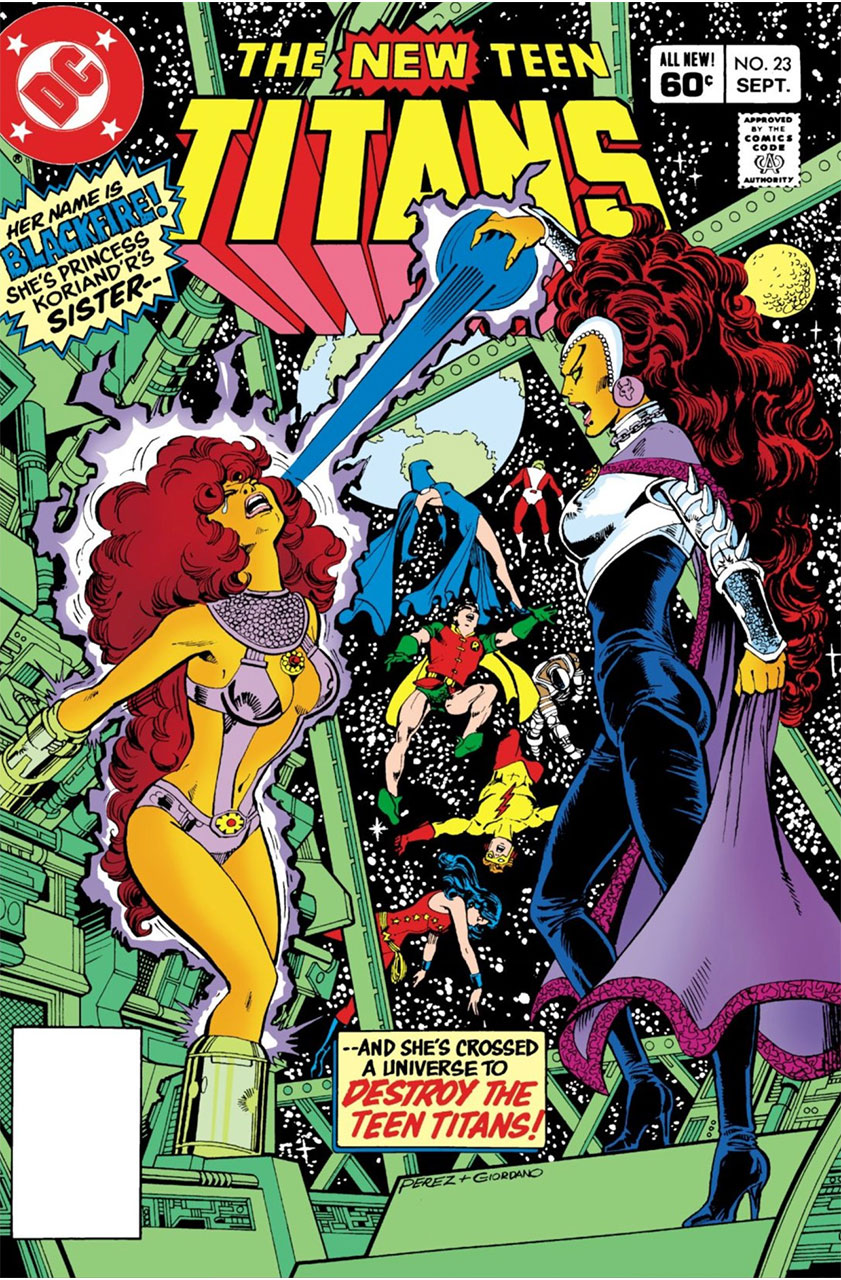 In the 1980s, The New Teen Titans pushed the boundaries of social issues too. Cyborg was shown to have an interracial romance at a time when that was still considered somewhat controversial, and Robin and Starfire were shown to be in a physical relationship, something seen as racy back in the day for a mainstream comic book, particularly one featuring Batman's world-famous junior partner. As for Wonder Woman's adopted sister, Wonder Girl began dating an older man, whom she eventually married, in a wedding (in Tales of the Teen Titans #50) which was a rarity for comic book stories of the time, as it went off without so much as a single villain crashing the proceedings. Titans tackled issues like teenage runaways (in The New Teen Titans #26) and drug addiction with a level of emotional complexity that was extremely rare for mainstream superhero books of the early '80s.

But The New Teen Titans REALLY pushed the envelope with their most beloved storyline, which happened over the course of two years. The team welcomed into their ranks a young girl named Terra (in The New Teen Titans #30), who had the power to control the earth. The sarcastic, witty sixteen-year-old won fans over right away. Though a year after she joined the team, it was revealed Terra was a spy planted in the group by the Titans' archenemy, the mercenary Deathstroke (who'd first appeared in The New Teen Titans #2). The saga came to its culmination in the now classic storyline "The Judas Contract" (starting in Tales of the Teen Titans #42). With no internet or social media to spoil things, its tragic ending was a total shock to readers. Yet it showed that Wolfman and Perez refused to pull any punches. 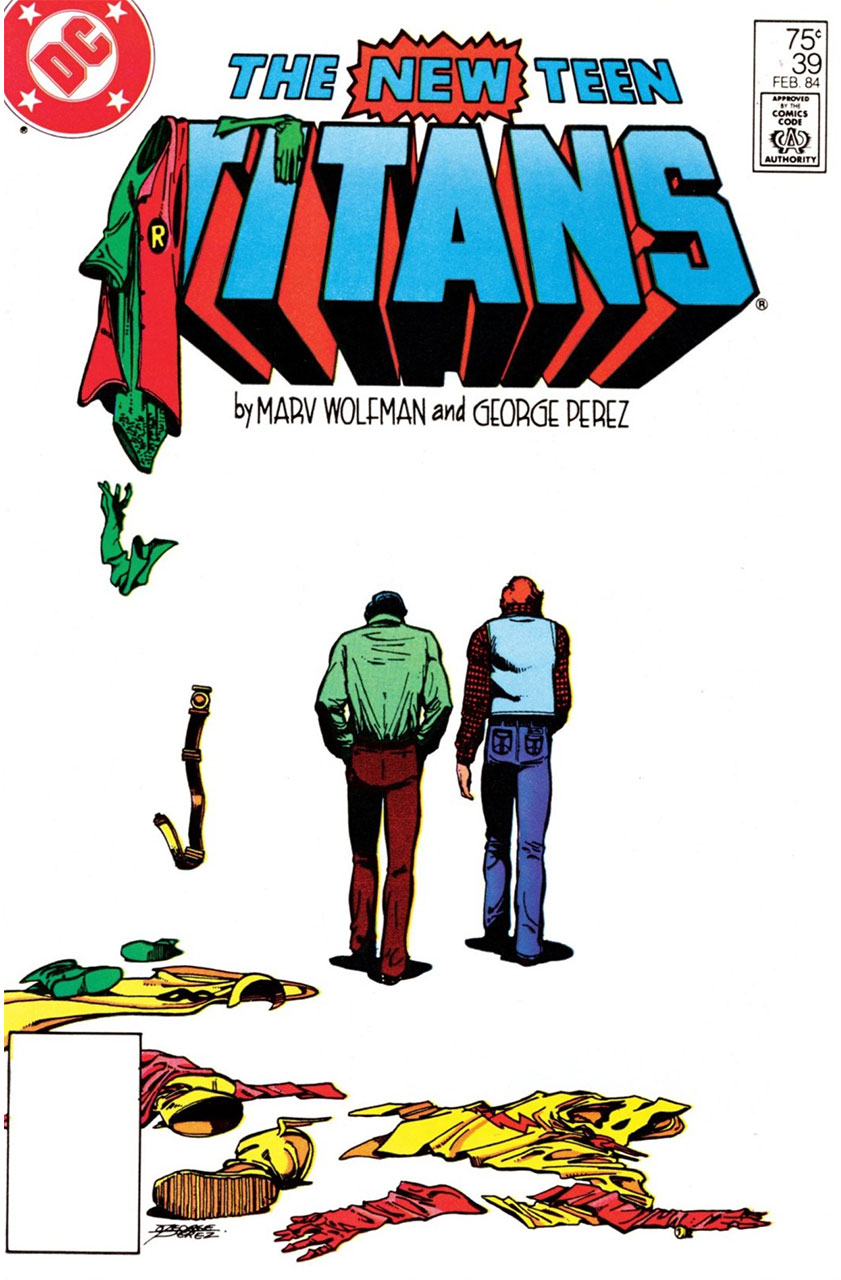 It was in the pages of Titans that the Dick Grayson we know and love today was really born. Wolfman and Perez gave him a character arc he hadn't had in the forty plus years he served as the Dark Knight's sidekick. When Dick transitioned from Robin into Nightwing (in Tales of the Teen Titans #44), it was, to say the least, monumental. This was easily the most famous "kid" superhero in history, an icon to millions; and Titans decided after four decades to make him an adult hero in his own right. It was unprecedented in a medium where characters rarely aged. Suffice it to say, without Titans, it's unlikely Nightwing would be the superstar he is today.

But it wasn't just Dick Grayson who got a boost. Kid Flash was also transformed from a younger version The Flash into his own, fully realized character. Wolfman and Perez took Wally West and made him into a complicated young man who struggled with whether the heroic life was something he wanted, and who often had his own beliefs challenged. Because of the changes Wally went through, fans accepted him when he finally took up the mantle of the Flash -- the first kid sidekick to succeed his mentor when he came of age. 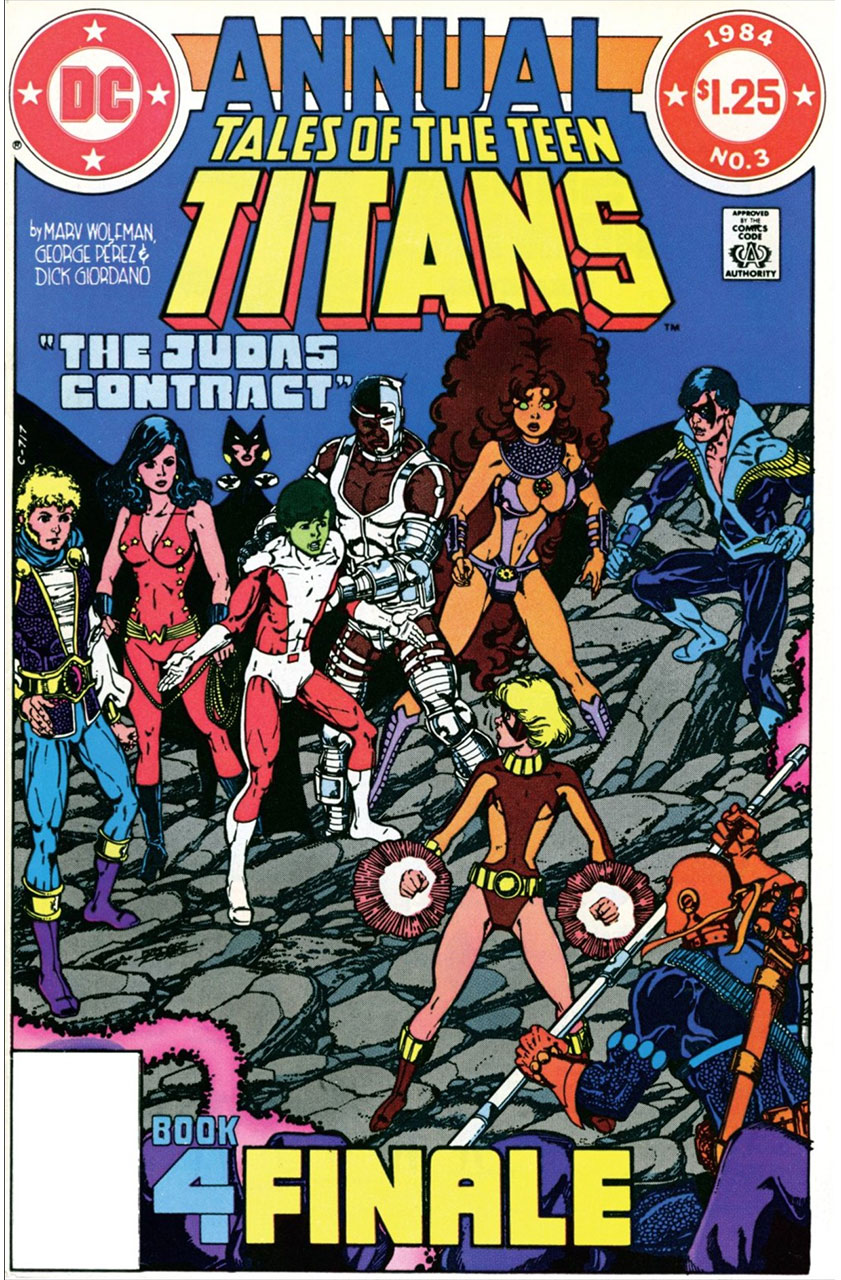 It's even fair to say the entire modern era of DC Comics wouldn't have happened without The New Teen Titans. After their success with the title, DC handed Wolfman and Perez the reins on Crisis on Infinite Earths, which fundamentally changed the DC Universe for all time. Without Crisis, it's possible we would not have the reinvigorated modern versions of Batman, Superman, and Wonder Woman (whom George Perez himself introduced in 1987's Wonder Woman comic) that we have today. In a sense, all roads lead back to The New Teen Titans.

Of course, the impact of The New Teen Titans can be felt far beyond the comic-book pages. The Teen Titans animated series which ran from 2003-2006 became a cultural icon, and it was very much based on the Wolfman/Perez line-up. The team's main antagonist Deathstroke became a primary adversary on Arrow, and of course, Cyborg became a founding member of the Justice League in their big screen adventure.  Today, we have screen versions of the team for young children with Teen Titans Go!, and for adult audiences with DC Universe's live-action Titans. But none of that would be possible without the magic of that original comic book series by Wolfman and Perez, which began nearly forty years ago.

Are a fan of The New Teen Titans? Let us know in our Community!