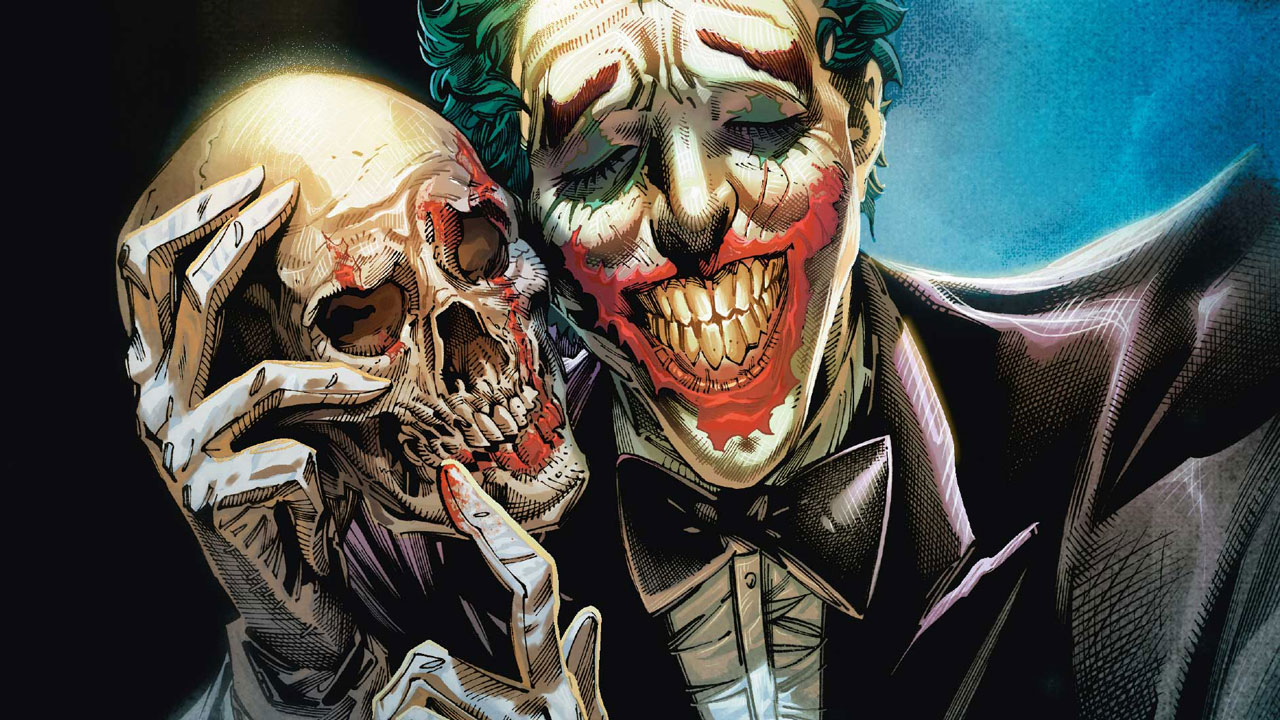 Why THE JOKER: YEAR OF THE VILLAIN Is the Decade's Best Joker Story

This month, we’re collecting a bounty of tie-in comics from the villainy-focused “Year of the Villain” mega-crossover event of 2019. In each of these comics, a powered-up Lex Luthor offers the greatest villains of the DC Universe their dreams come true in exchange for their allegiance in a war for all reality -- or, he doesn’t, when it comes to the wildcards and miscreants who don’t fall into the parameters of his plans. As any Batman fan knows, one villain you can never plan for is The Joker… so Joker’s own “Year of the Villain” special had to be something truly  special. What DC produced was a single, standalone story that had nothing (and everything) to do with the ongoing event, and what by rights should stand the test of time as one of the greatest Joker stories ever told.

Look: don’t let us spoil it for you. Even if you’re not following this event, take a chance and read it for yourself. But just in case you need further convincing, here are some good reasons why you should pick a good and spooky night this month to read JOKER: YEAR OF THE VILLAIN.

There are few people today who can truly be called “masters of horror” without exaggeration or embellishment. But one of those undisputed masters is John Carpenter, creator of Halloween movie classics like They Live, 1982’s The Thing, and well… Halloween. An expert of cinematic pacing creating a mood of sheer terror, getting John Carpenter to write a Joker story is an idea straight out of a comic book fan magazine’s bucket list. And yet, in 2019, this unlikeliest of collaborations between the worlds of horror movies and DC Comics came to be. Many expected a novelty; a nominal Joker story which might, at best, acknowledge the ‘60s Cesar Romero version, or maybe even draw on the character’s Man Who Laughs origins. What we got was something entirely unexpected: a thoughtful, considered take on The Joker which gets right to the character’s core, without abandoning the principles of mystery and obfuscation which have made him such a compelling entity of evil. After all, The Joker is, when all’s said and done, a monster, and Carpenter treats him with the same depth as any of his own. 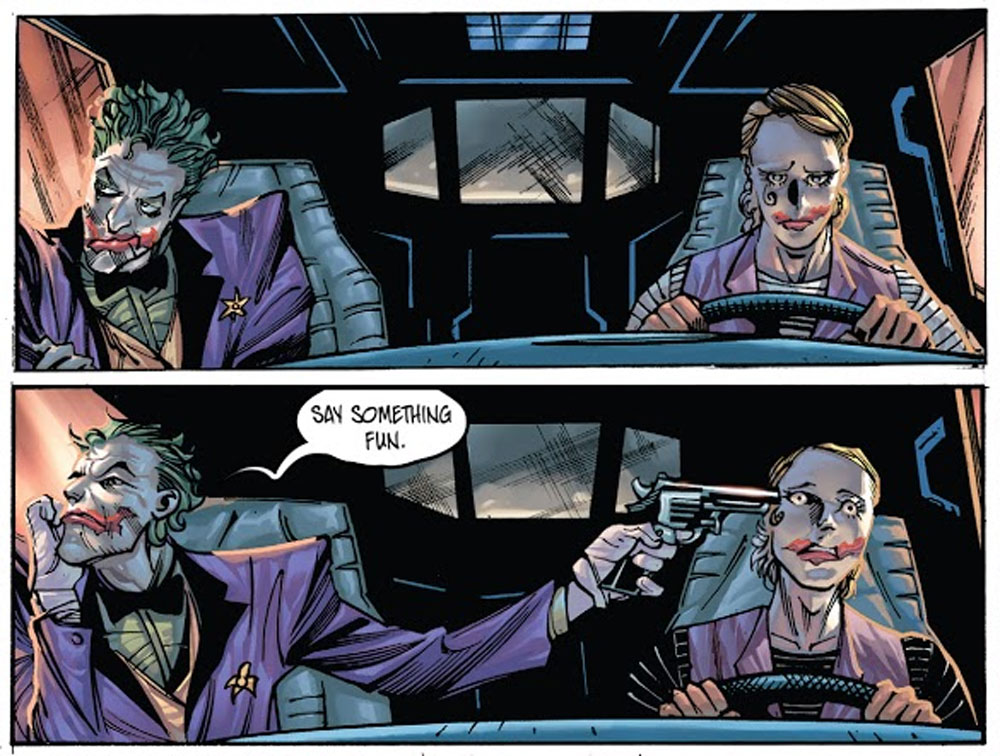 How do you make a Joker story work, if The Joker himself has to remain a mystery? By centering the perspective on the people around him. It’s an effect previously achieved by Brian Azzarello and Lee Bermejo’s JOKER graphic novel, and the trick works here once more. The crucial perspective here isn’t that of The Joker himself, but one of his henchmen. The story begins with a simple premise: what kind of person would someone have to be to willingly work for the world’s most chaotic super-villain? Certainly not for safety, or stability, so for what? Enter “Six of Hearts,” a henchman who calls back Joker’s playing card origins that go back to BATMAN #1. Caught up in The Joker’s cult of personality, Six finds himself by Joker’s side through one of the wildest nights in the history of Gotham City, knowing any moment could be his last -- if it’s funny enough for The Joker to kill him. 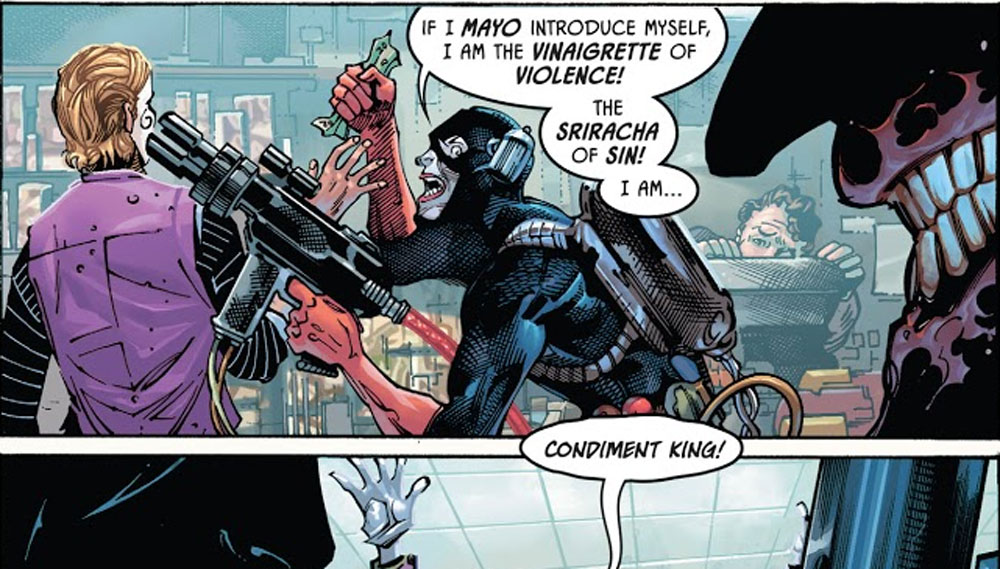 And a wild night it is, indeed. With the star power coming onto this special one-shot comic book, it wouldn’t be unreasonable to expect that JOKER: YEAR OF THE VILLAIN wouldn’t have anything to do with the rest of the DC line. But, if you’re looking for it, all of the markers of continuity are present. Year of the Villain, City of Bane, and even the Rebirth-era incarnation of the Suicide Squad all inform the background of the story. It’s done in a tasteful way which doesn’t really require you to know everything going on in those stories, but their presence lends a depth to the worldbuilding quite uncommon for guest writers. It, shockingly, feels in place just alongside every other title DC was publishing at the time. Which is important for the book’s surprise finale: this isn’t a dream, or an imaginary story, or one writer’s unique take. This is the actual, factual Joker. And what Six of Hearts realizes about him by the end of the night is a horror that’s all too real. 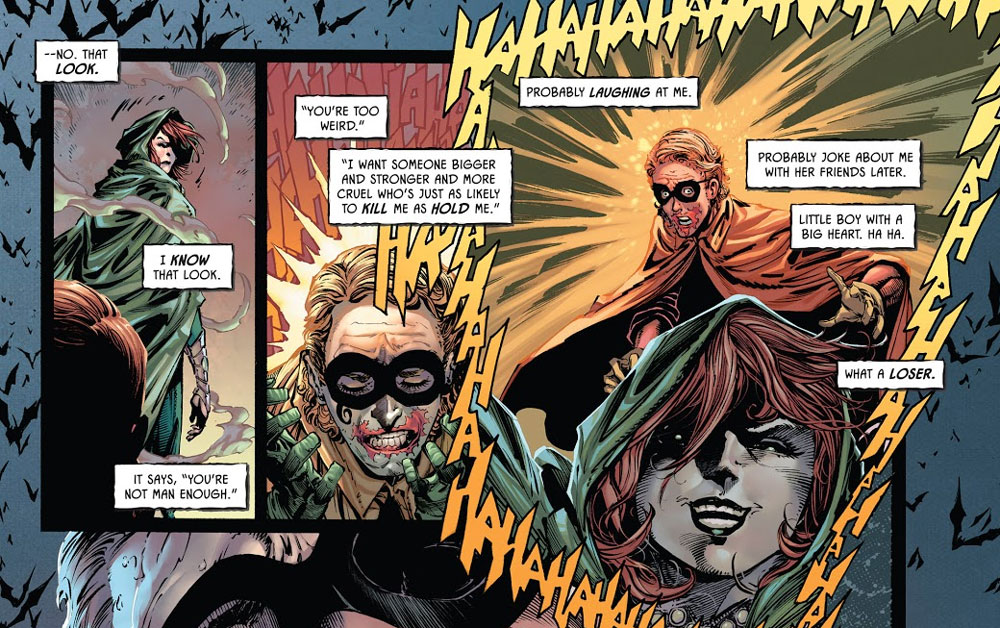 It’s difficult to talk about this aspect of the story without spoiling the best part, but what sets JOKER: YEAR OF THE VILLAIN above other, similar stories is its fearlessness. Namely, the bold approach it takes to addressing one of the harshest critiques of the Batman mythology: the demonization of mental illness. JOKER: YEAR OF THE VILLAIN isn’t just a comic book story, but a story about mental health: how it’s presented in comics, versus how it manifests in real life. Six of Hearts is never diagnosed in the course of the series, but his own internal demons are all too recognizable. And when contrasted to the comic book grandeur of The Joker’s insanity, it’s clear that there’s something more going on than it seems at first on the surface… and for answers, you’ll have to read on.

THE JOKER IS… ACTUALLY FUNNY! 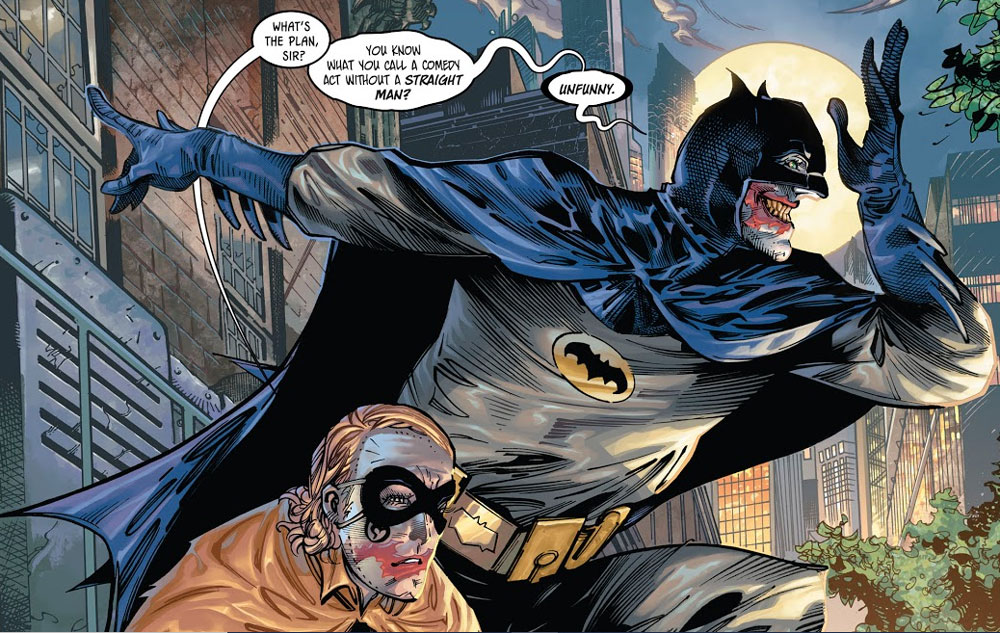 There are some very important rules when it comes to doing Batman villains right. If you're writing The Riddler, you gotta write riddles. If you're writing Catwoman, you gotta have a heist. And if you're writing Joker... he has to be funny. Not joke book funny, or stand up comedy funny, but funny in the pitch-black way that makes you feel guilty after the fact for laughing with him. The Joker is at his best when you feel like you're in on the joke. By kicking the walls of the Batman setting, from the nature of Batman himself to the every-night lunacy of Gotham, The Joker gets genuine laughs all the way through the book. Not because he's looking for them, but just by being who he is. True comedy always has a target, and the real joke here is on us, for our enthrallment with the cycle of violence which has always been part of the Batman story. But when comedy is this good, even as the target, all you can do is humble yourself and laugh. That's The Joker's message, really. If you can't laugh, then what's the point?

Are you a fan of JOKER: YEAR OF THE VILLAIN? Let us know in our Community!