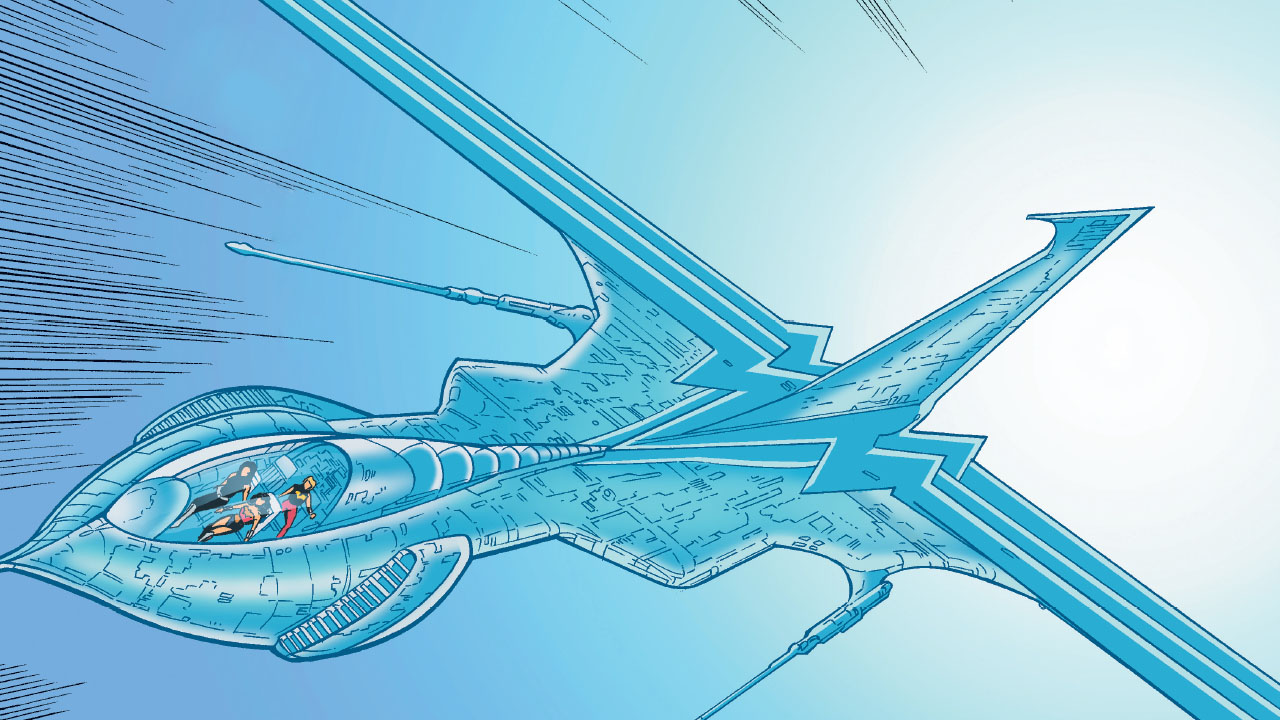 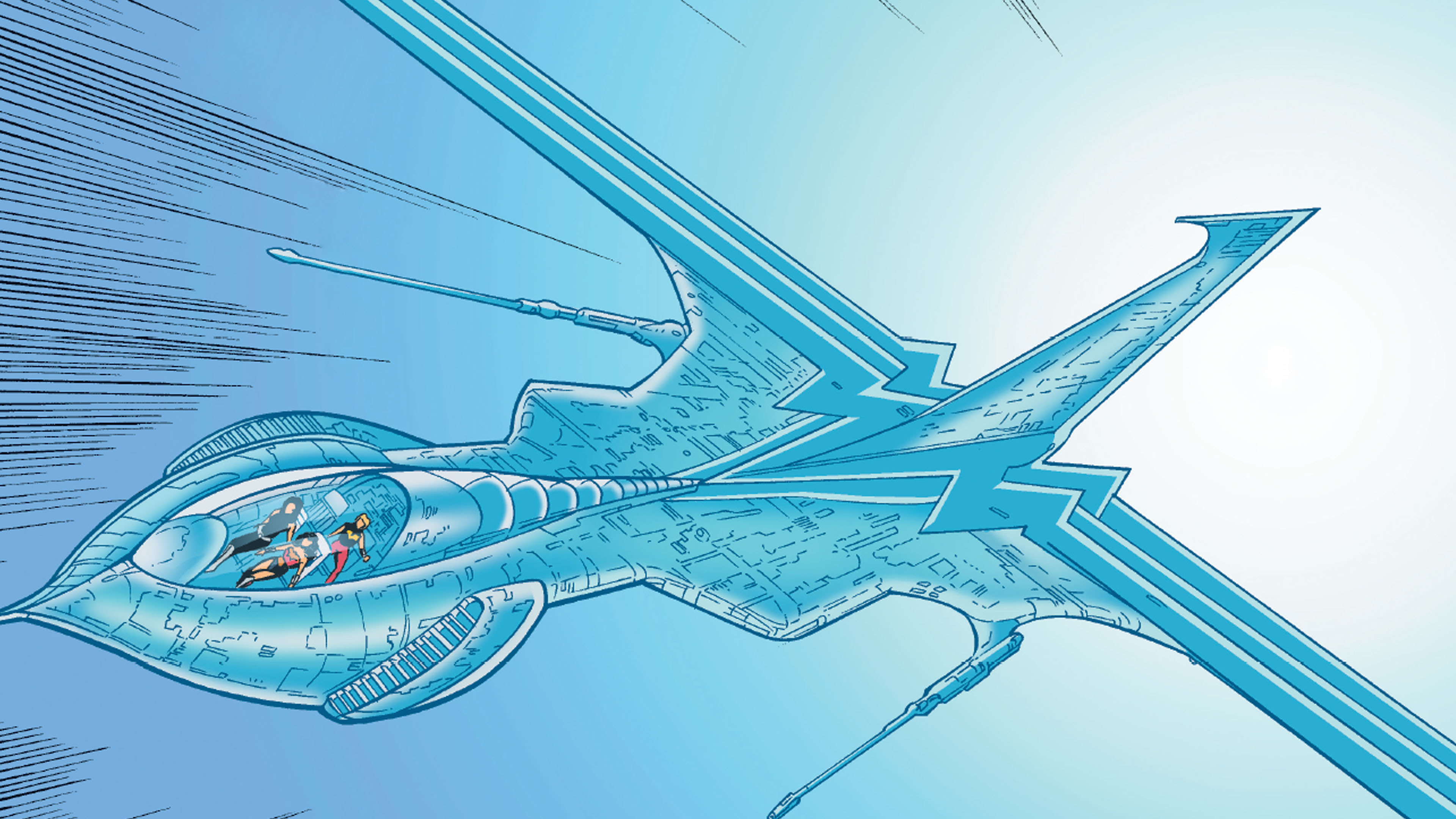 Why Does Wonder Woman Have an Invisible Jet? A DC Universe Investigation

For Wonder Woman fans who grew up on a balanced diet of Lynda Carter and Super Friends, it’s an image you can’t help but conjure: the Amazon Princess seated in flight, hurtling through skies of repeating clouds as she manipulates the wheel and levers of an invisible console to keep the barest outline of a plane afloat. But hey, isn’t Wonder Woman able to fly on her own? What does she even need a plane for? And where in the world did she get such a thing? Let’s find the answers together in this special DC Universe investigation. 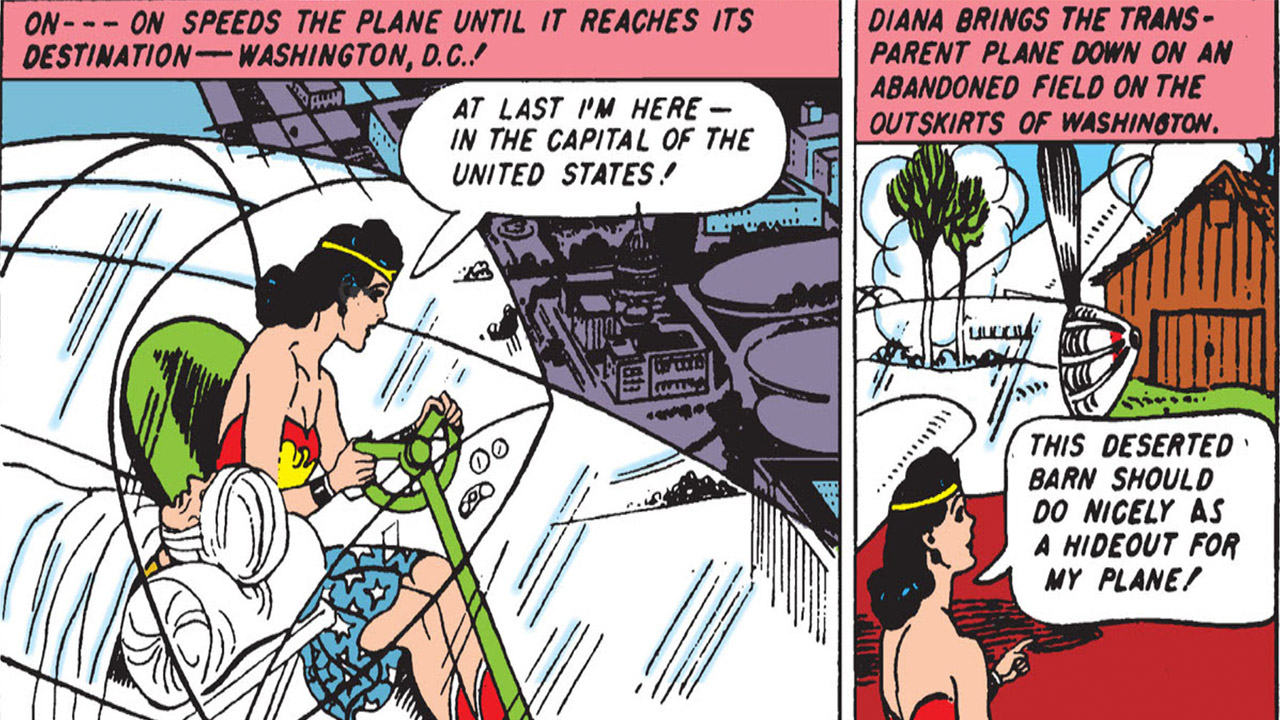 First of all, it’s worth noting that for most of her history, Wonder Woman WASN’T able to fly. In fact, most airborne heroes today only had flight added to their de rigueur list of superpowers over time. (Hence why heroes like Hawkman could make a whole career out of  simply being able to fly on their own. These days, you need more of an angle than jumping without coming down.) When Diana made her debut in 1941’s All-Star Comics #8, the Invisible Jet was already right there with her, ready to take her away from her home island of Themyscira and into man’s world. In addition to allowing silent, supersonic flight, the jet also allowed Diana to comfortably seat passengers with her for long journeys (such as Steve Trevor, on its maiden voyage). But most importantly, and yet often overlooked today, was the jet’s ability to emit a rainbow beam which could penetrate the mists around Themyscira — otherwise making it virtually impossible to access. Much later, 1981’s DC Comics Presents #41 explains the odd depiction of Wonder Woman seated in the silhouette of a plane: by illustrating that these visual aids are only present for the reader’s convenience, and that in-fiction the plane and occupants alike are rendered completely transparent.

Early appearances of the jet provide two explanations of its origin: one as a gift from her patron Aphrodite, and the other claiming that Diana built the craft herself, with Golden Age appearances under the tenure of her creator, real world inventor William Moulton Marston, often established her as a skilled inventor and engineer in her own right. These two alternate accounts found reconciliation in 1955’s Wonder Woman #80, where Diana tells a story set during her preparation to leave Paradise Island. To prepare proper transportation, Diana undergoes three labors to collect the pieces of the Invisible Jet, so that she could assemble them herself for the journey to come. 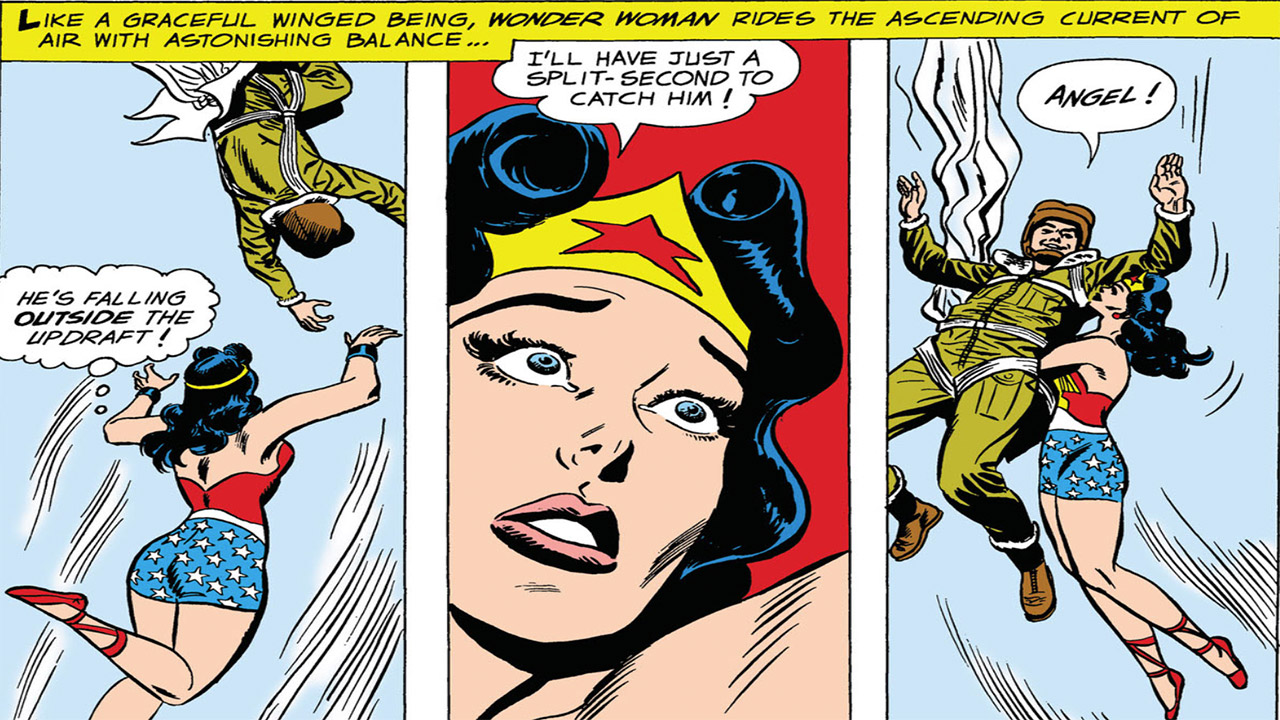 It was three years later, in 1958’s Wonder Woman #98, that Diana began to soar on her own — but these powers were limited, only allowing her to ride undependable air currents like a bird in mid-flight. To reliably get around, Diana still relied on her Invisible Jet, which she could call to her from anywhere using a telepathic link though her tiara. 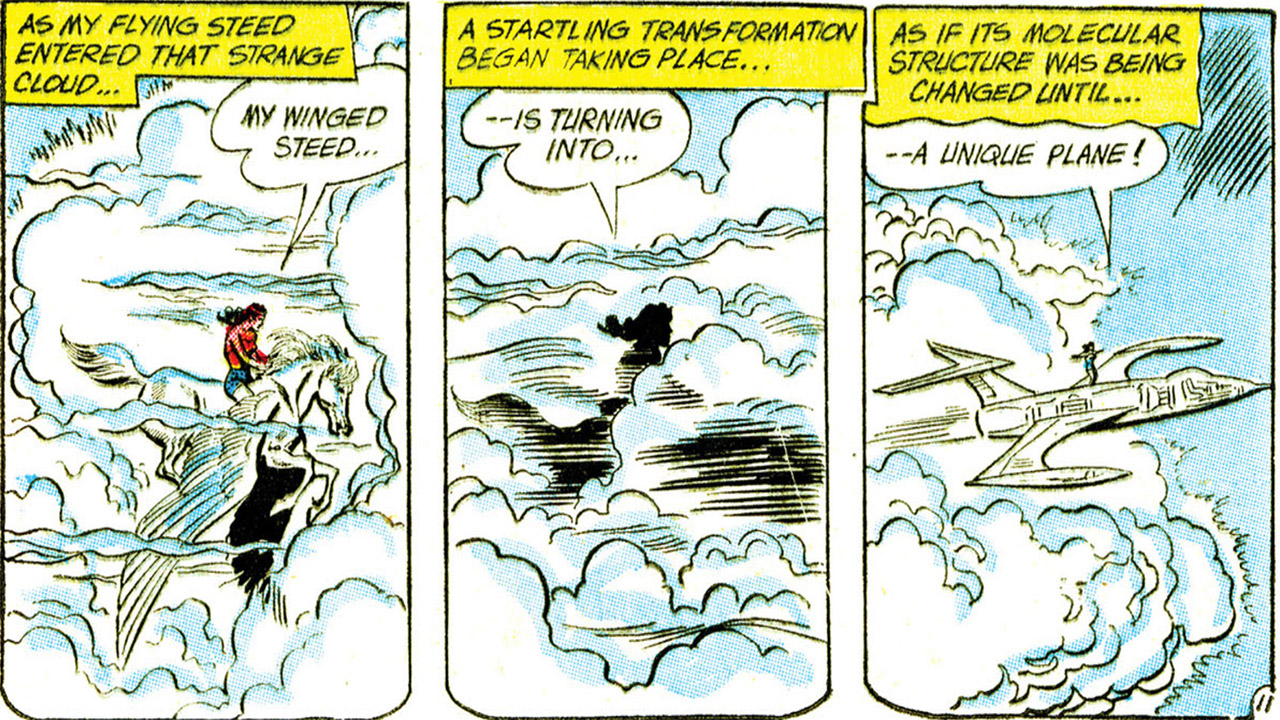 In 1961’s Wonder Woman #128, the Invisible Jet was given a new origin for the Silver Age: in this tale, we learn that the jet is none other than Pegasus, the winged horse of Greek myth, who Wonder Woman rescued from a terrible plight while still on Paradise Island. In gratitude, Pegasus swore an oath of fealty to Wonder Woman’s service forevermore. In adaptation to the changing world of man, Pegasus magically transformed into a jet while outside of Themyscira, and could cloak himself from sight whenever needed. But considering this story is told during the “Impossible Tales” era of Wonder Woman continuity where three different versions of Diana -- Woman, Girl, and Tot -- co-existed at the same time, its veracitude can be reasonably met with a dose of skepticism.

Then came 1985’s Crisis on Infinite Earths, and the last we’d see of the Invisible Jet for quite some time. In the George Pérez-helmed 1987 reboot of Wonder Woman’s origin, Diana was finally, completely able to fly under her own power, no strings attached. 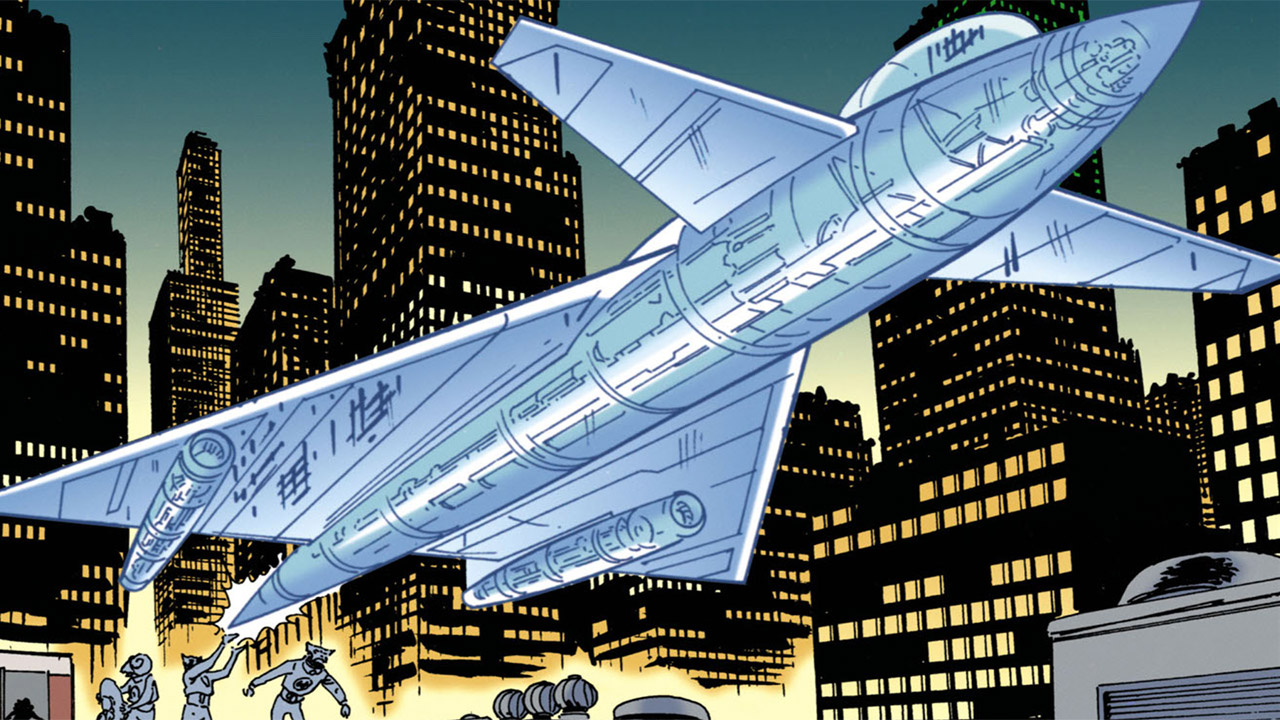 It was John Byrne who brought the Invisible Jet back into Wonder Woman’s life in 1996’s Wonder Woman #115, the strangest origin story yet. By Byrne’s accounting, the Invisible Jet was actually a semi-sentient, extraterrestrial artifact known as a Morphing Crystal, which naturally takes the form of a translucent egg. Separated from its family of crystals, one such artifact fell to Earth, to be discovered by a sub-Antarctic race of the Lansinarians. The Lansinarians refined this crystal into what they called a Morphing Disk. As a token of gratitude for saving their people, the Lansinarians gifted this Disk to Wonder Woman, who could use it to take the form of any mode of transportation, from horse-drawn carriages to rocketships. In 1998’s Wonder Woman #140, the Disk reaches its ultimate form as the WonderDome, Diana’s own invisible, completely mobile floating equivalent to the Batcave or Fortress of Solitude. This WonderDome takes its last flight in 2004’s Wonder Woman #201, where it nobly sacrifices itself to save Themyscira itself from a massive, crashing wave which would have otherwise cast it into oblivion. 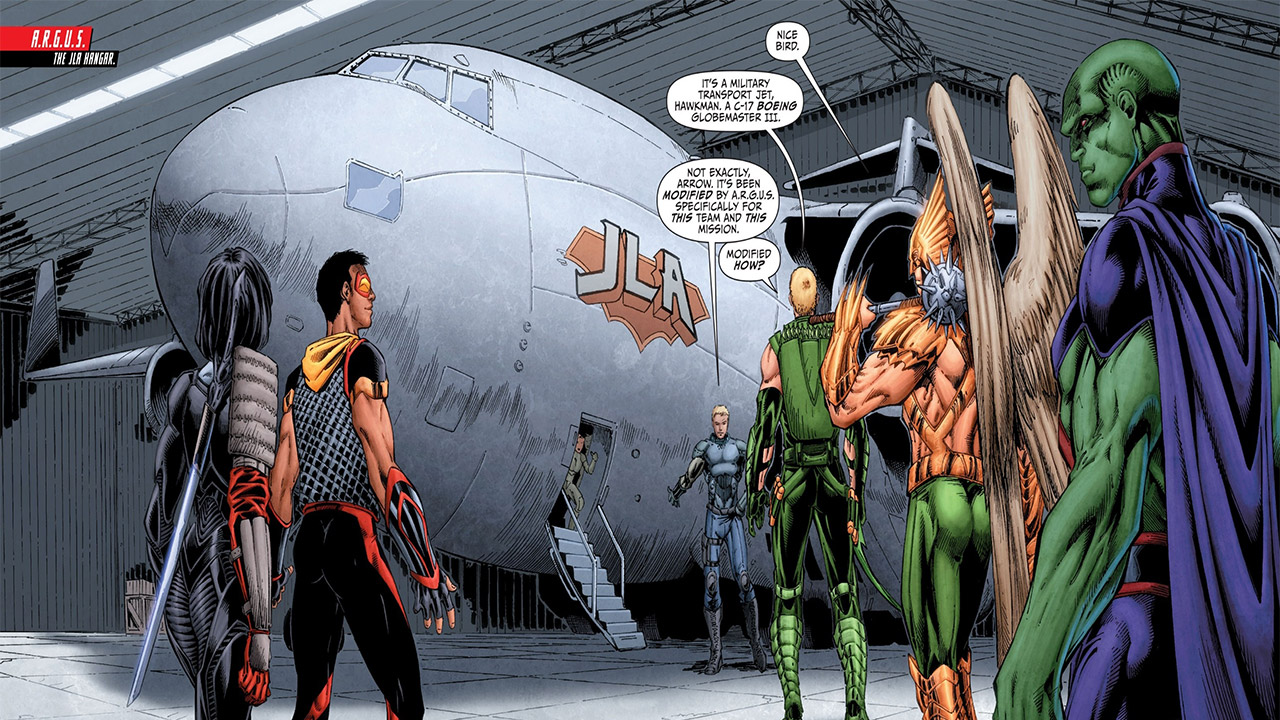 The Invisible Jet wouldn’t appear (or not appear) again until 2011's New 52 era, when it was reintroduced as an experimental A.R.G.U.S. stealth craft. This version is mainly used by A.R.G.U.S. agent Steve Trevor, who deploys it to transport his own Justice League of America. This origin translates to the upcoming animated film Wonder Woman: Bloodlines. 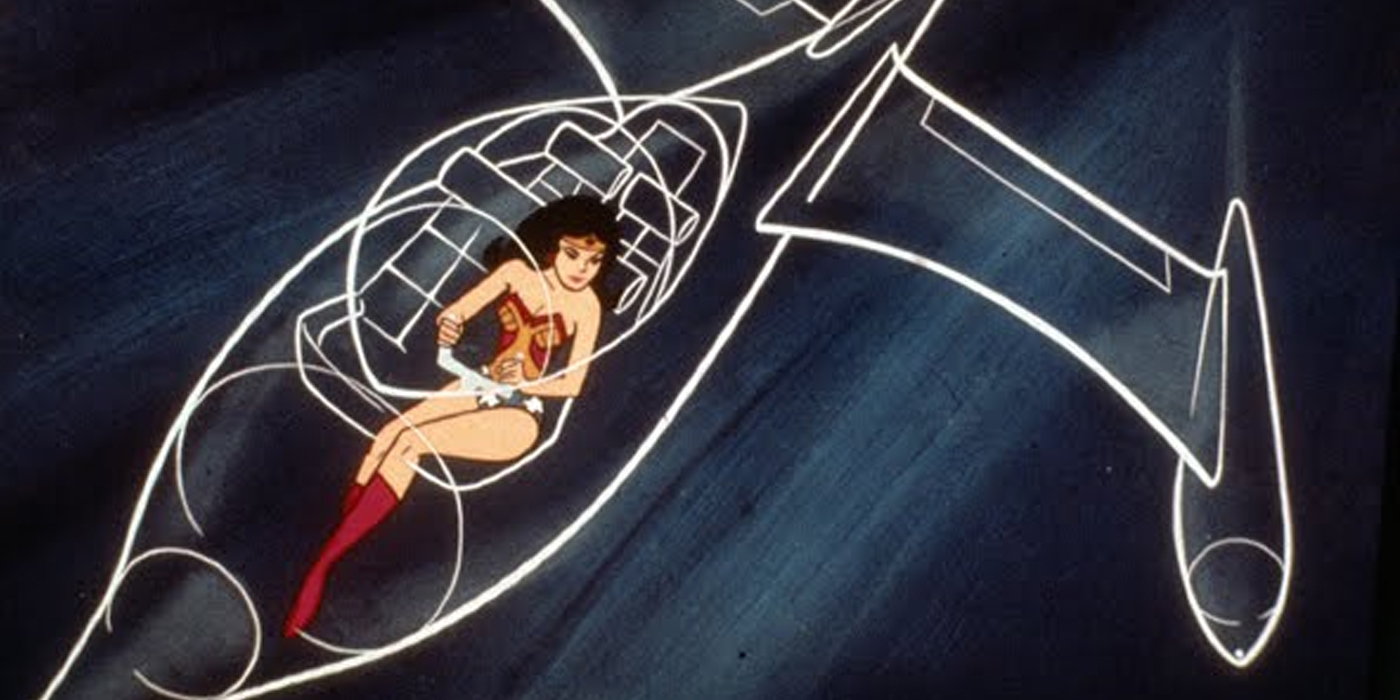 Speaking of movies, 2010’s Justice League: Crisis on Two Earths provides its own origin story for the Invisible Jet — revealing it to actually belong to the Crime Syndicate of America’s Owlman of the evil doppelganger Earth, which can slip in and out of invisibility as well. That is, until Wonder Woman downs the craft, damaging its “Chameleon Circuit” so that it’s stuck in Stealth Mode (a cheeky little reference for the Doctor Who fans among us to similar technology found in that series). Upon the Crime Syndicate’s defeat, Diana claims the jet for herself as a “spoil of war.” (Fun fact: before later redrafts, Crisis on Two Earths was first written as a film to bridge the time gap between the Justice League and Justice League Unlimited animated series. This was therefore originally meant to be the origin for the Invisible Jet in Bruce Timm and Paul Dini’s DC Animated Universe.) 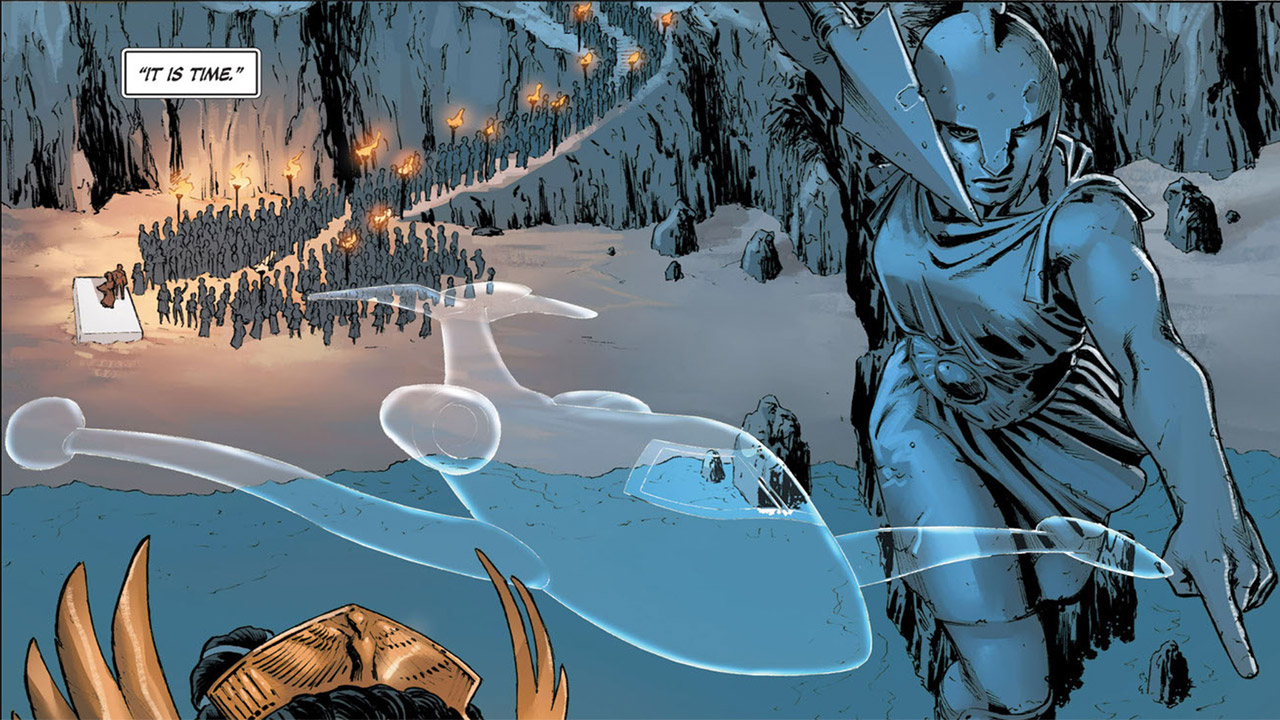 But to our minds, the most elegant explanation for the Invisible Jet comes from the recent “Wonder Woman: Year One.” Providing a new Wonder Woman origin for the Rebirth era, this 2016 story posits the origin of the jet as Steve Trevor’s own, crash-landed on Themyscira. As Steve recuperates amongst the Amazons, the Themyscirans repair his downed jet for passage back to man’s world — and enchant it with invisibility for good measure, allowing him to leave without giving away their closely guarded position. Given the alternatives of alien crystals, transformed pegasi, and boons from the goddess of love, sometimes the simplest origins are the best.