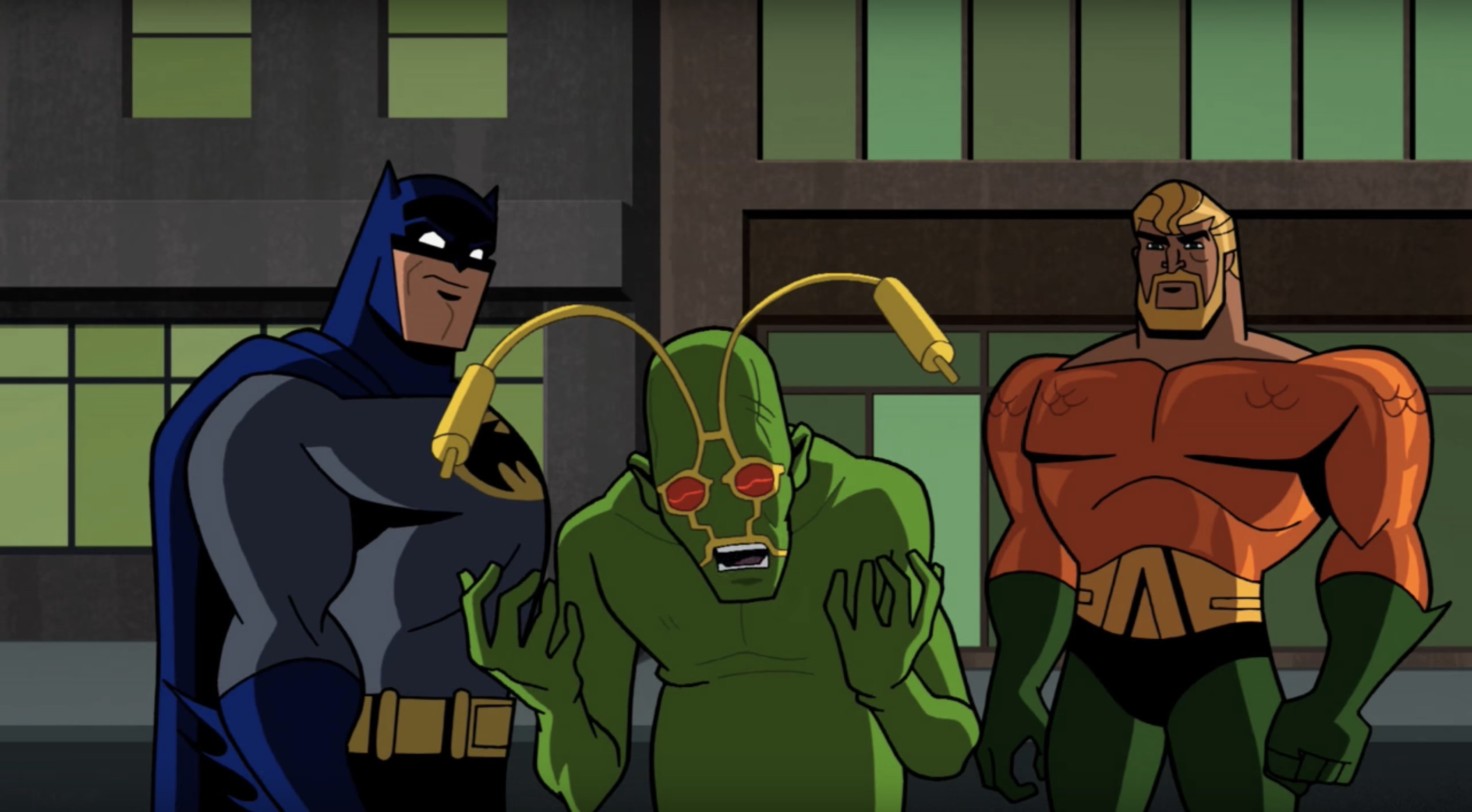 Chances are, when you think about Batman cartoons, one show comes to mind. From the swelling musical score to the iconic dark deco look, Batman: The Animated Series has owned most Batfans' hearts and minds as the sterling example of what an on-screen Dark Knight should be. And you know what? That's okay. No one is going to argue that TAS isn't totally deserving of its reputation... But. There's another animated Batman show. One that may be a little less familiar to some fans. And while Batman: The Brave and The Bold may not enjoy the legendary status of its predecessor, it certainly holds the title for the most underrated on-screen Batman ever created.

Don't believe me? Let's break it down... 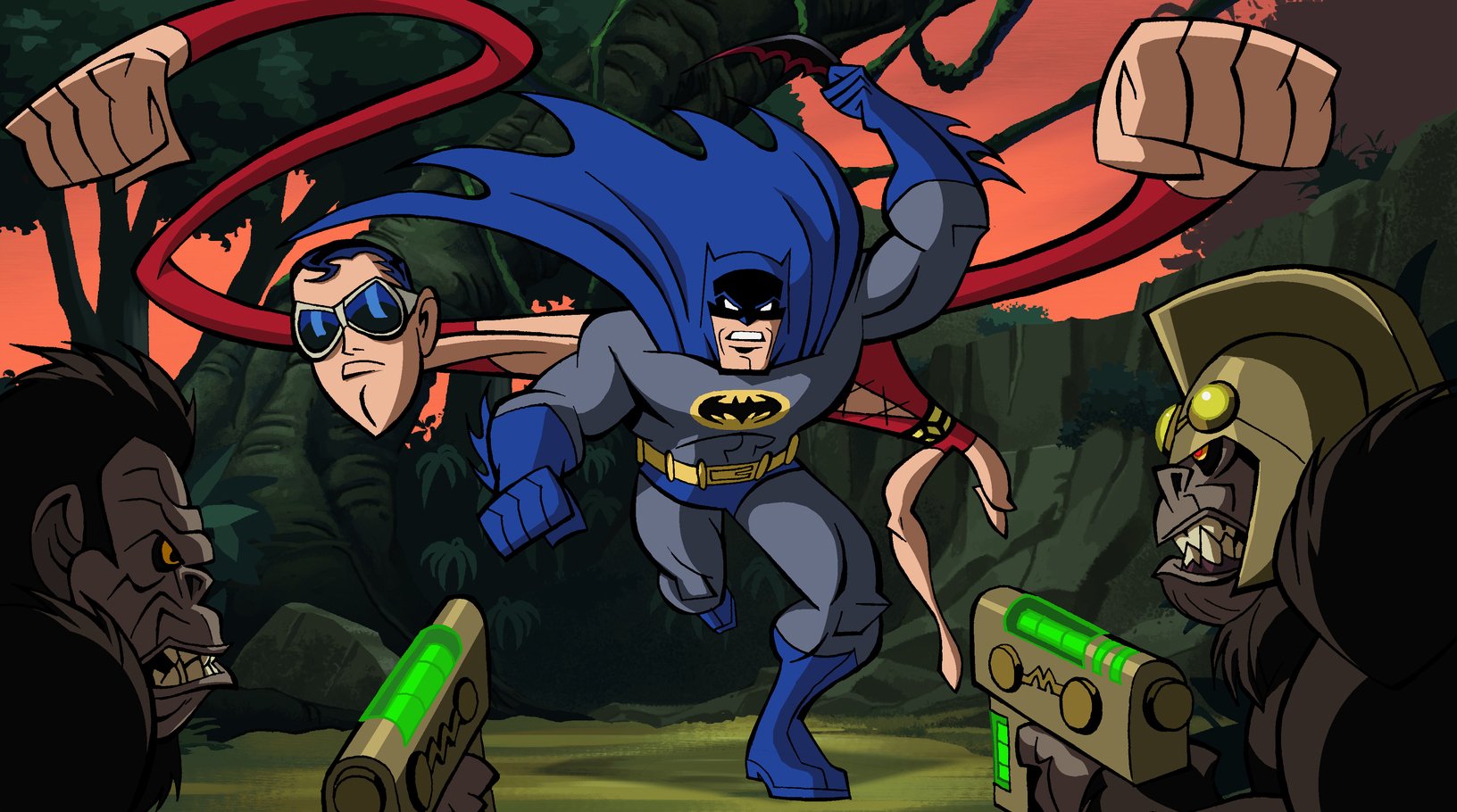 Let's be honest: Batman can be kind of a dreary guy sometimes. It's the look he goes for, and it works, especially in the environment where which most of his stories are set. But when it comes to places that aren't gloomy or rain-slicked, or moods that aren't heavy and brooding, well, that's where The Brave and The Bold comes in.

The tone of the show is light. It's less hard-hitting crime thriller and more fun team-up. But it never quite crosses the line into self-mockery. Instead, it offers entertainment for all ages as it takes the Caped Crusader across the DC universe, matching him up with a spectacular assortment of off-the-wall partners, many of whom test his unflappability. Remember Buzz Lightyear and Woody in the Toy Story movies? That's Batman and most every hero he's paired with in The Brave and the Bold.

The show's co-creator and executive producer James Tucker once said that while most post-Tim Burton screen versions of Batman took their cue from the character's earliest adventures in the '30s, or his post-'70s persona of a nocturnal vigilante, The Brave and the Bold claimed as its own the Dark Knight's bright '50s and early '60s adventures. It mines these Silver Age stories expertly. 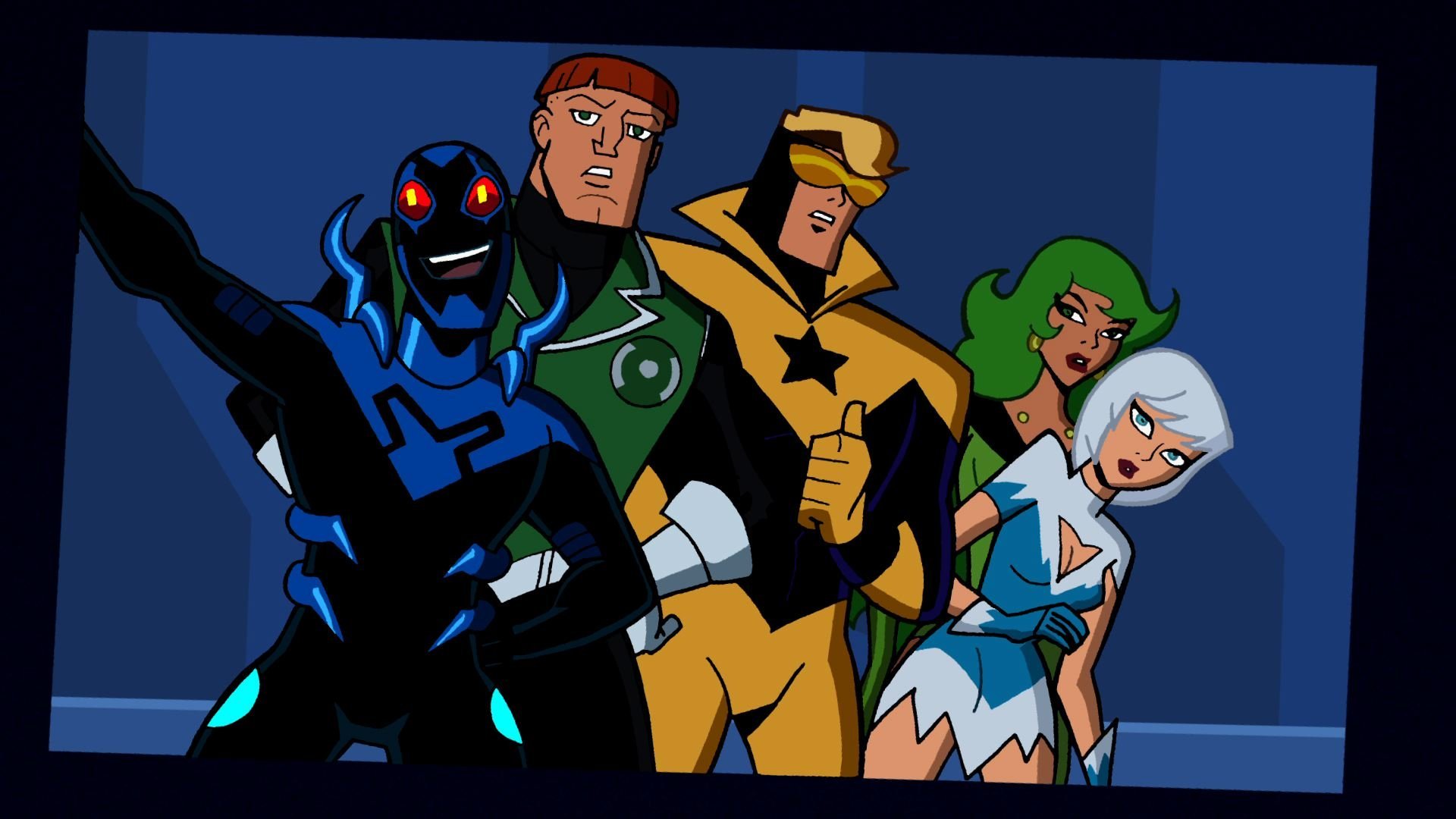 The original The Brave and the Bold comic book is one of the most fondly remembered DC titles from the Silver and Bronze Ages of comics. By the late '60s, each issue (most of which were written by Bob Haney and penciled by Jim Aparo), saw Batman team up with a different hero. Similarly,  each episode of its namesake show is themed around Batman partnering with a different DC hero from across the multiverse. And when we say "across the multiverse" we mean it! From old favorites like The Flash and Green Lantern to more obscure pulls like Kamandi the Last Boy on Earth, The Brave and The Bold delighted in placing Batman opposite as many different characters as possible.

It'd be tough to list all the cameos and team-ups here, but to name a few? We've got Deadman, the Outsiders, the Doom Patrol, the Metal Men, Justice League International...the list goes on and on and on. The weirder and more obsure the better. What other show has offered the likes of Detective Chimp, the Creature Commandos, the Haunted Tank, Ambush Bug, and B'wana Beast -- let alone made you care about B'wana Beast? 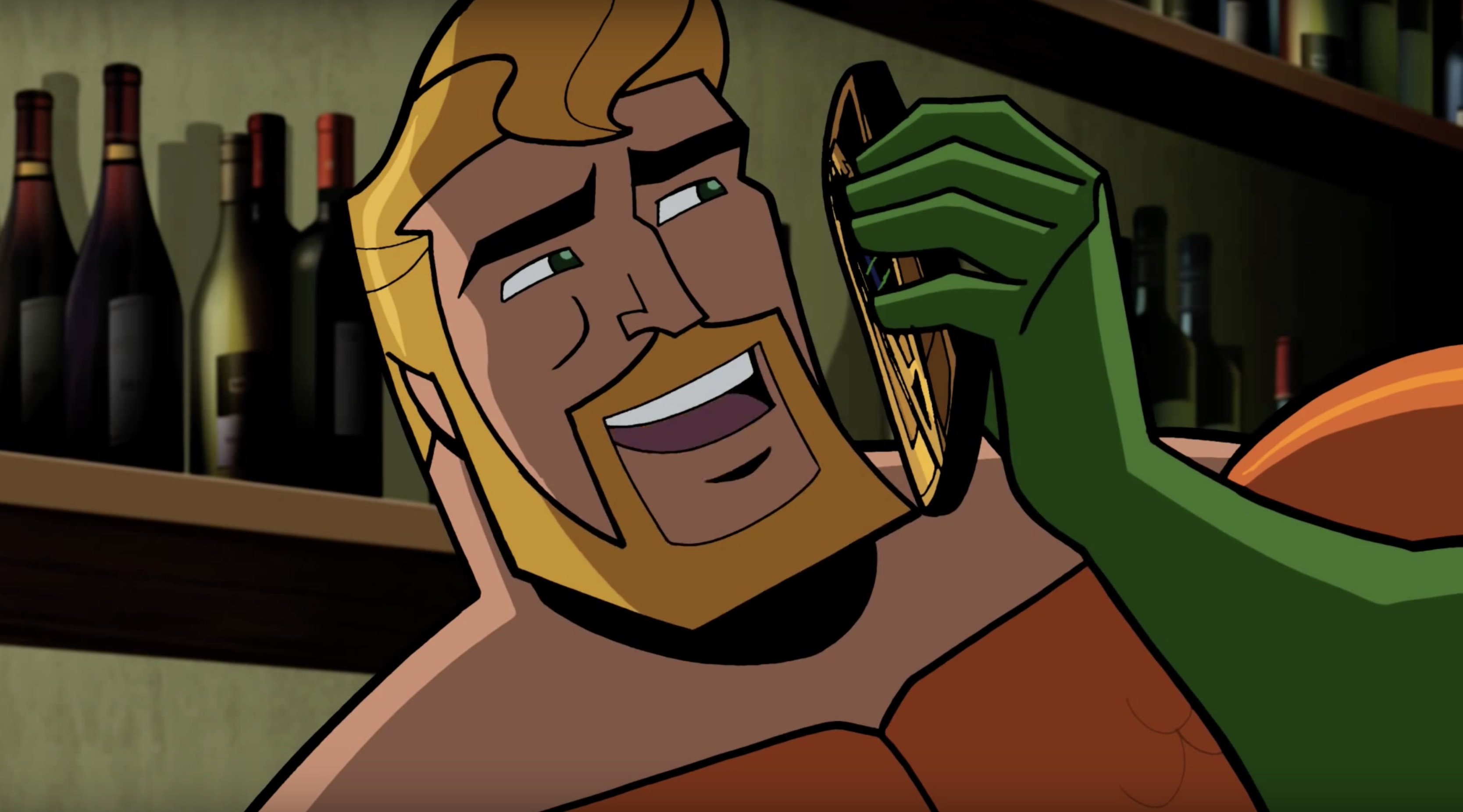 Okay, so playing favorites isn't fair, and all of the show's team-ups are amazing. But we have to be honest. One character stands above the rest in The Brave and The Bold's star-studded pantheon -- Aquaman. A totally new take on Arthur Curry, certainly the best screen version ever, here the seafaring Super Hero is a boisterous, barrel-chested, boastful (though never pompous) do-gooder with an unforgettable catchphrase -- a thundering "Outrageous!" he bellows every chance he gets. John DiMaggio (Bender of Futurama fame) supplies the voice. No wonder he appeared in so many episodes. He also gets some of the best songs.

The Tunes (No, really) 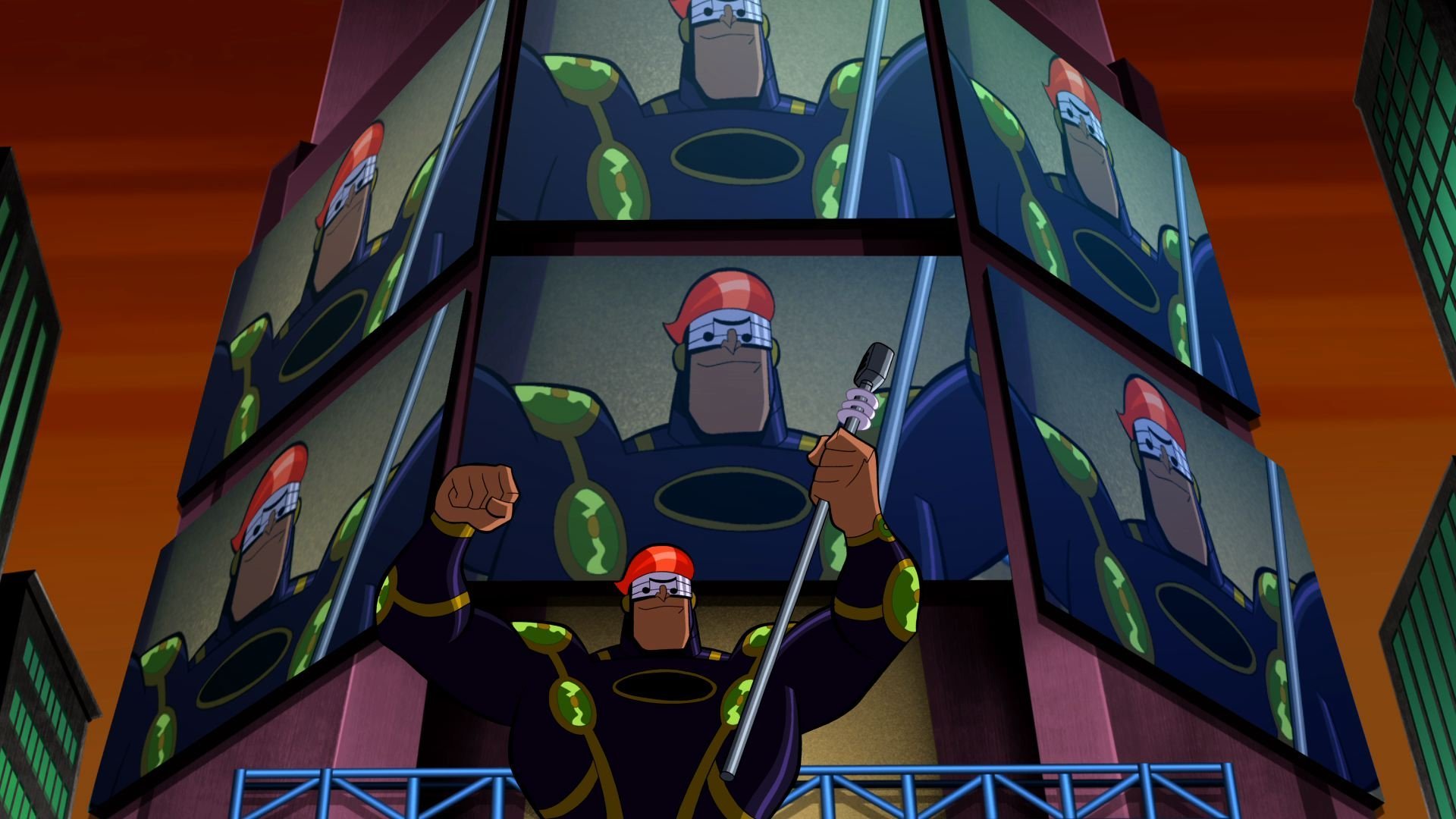 Oh, you didn't know about the songs? Yep, The Brave and the Bold is the most tuneful of all DC animated series; with a handful of gems sprinkled throughout the show's run. Like "Aquaman's Rousing Song of Heroism" ("Who are you? Are you a man or a Superman..."), "Gray and Blue" (the Vigilante's serenade to Batman whilst the Caped Crusader marches towards an Old West showdown), and "Birds of Prey" (a cabaret number sung by the famed trio of heroines).

But if you only watch one Brave and The Bold episode, make sure you pick the one that's wall-to-wall music -- "Mayhem of the Music Meister!" (Like all of the show's episodes, and like many a Silver Age comic tale, its title is punctuated by an exclamation point.) This was the Music Meister's debut performance, but his reputation has grown in the years since. He even made the leap to live-action in an episode of The Flash ("Duet", guest-starring Supergirl).

The Meister has the ability to force anyone (hero and villain alike) into performing spontaneous musical numbers. Everyone under his sway is forced to sing and dance as if they're in a Broadway musical, while he executes his latest scheme. That means we're treated to a string of original song-and-dance numbers performed by DC Super Heroes. From Aquaman to Black Canary, everyone gets a chance to belt their hearts out as they fight to put a stop to the Meister's musical machinations. It's the most fun you can have watching a Batman TV show. 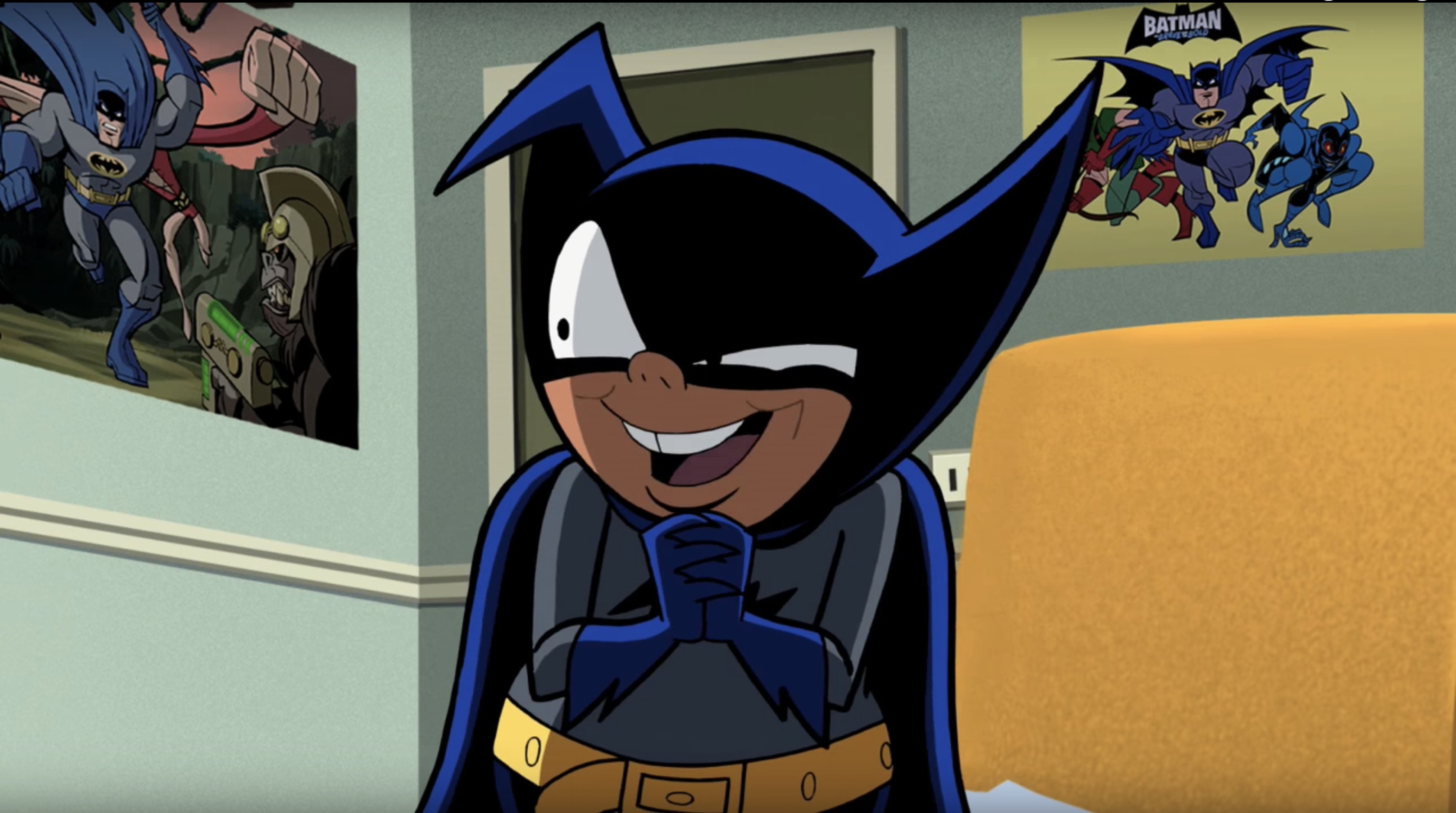 Bat-Mite, that extra-dimensional imp from the Dark Knight's Silver Age, stars in no fewer than three Batman: The Brave and the Bold episodes: "Legends of the Dark Mite!", "Emperor Joker!", and "Mitefall!" All three (in which he's voiced by Pee-wee Herman himself, Paul Reubens) are terrific. But the best is the third, the series finale. Written by legendary Bat scribe Paul Dini (who also wrote the show's take on Batman's origin "Chill of the Night!"), "Mitefall!" finds the god-like troublemaker using his power to cancel the series -- by forcing it to jump the shark. The episode's meta, fourth-wall-breaking humor is matched only by the sincerity of Batman's heartfelt farewell to the children who've watched the show (in a speech penned by executive producer Tucker). It's not just a great Batman series finale, not just a great animated series finale, it's one of the greatest TV series finales of all time. Worthy of enshrinement alongside the swan songs of Newhart and Star Trek: The Next Generation.

So there you have it. If you haven't given Batman: The Brave and the Bold a try yet, well, whaddaya waitin' for?!