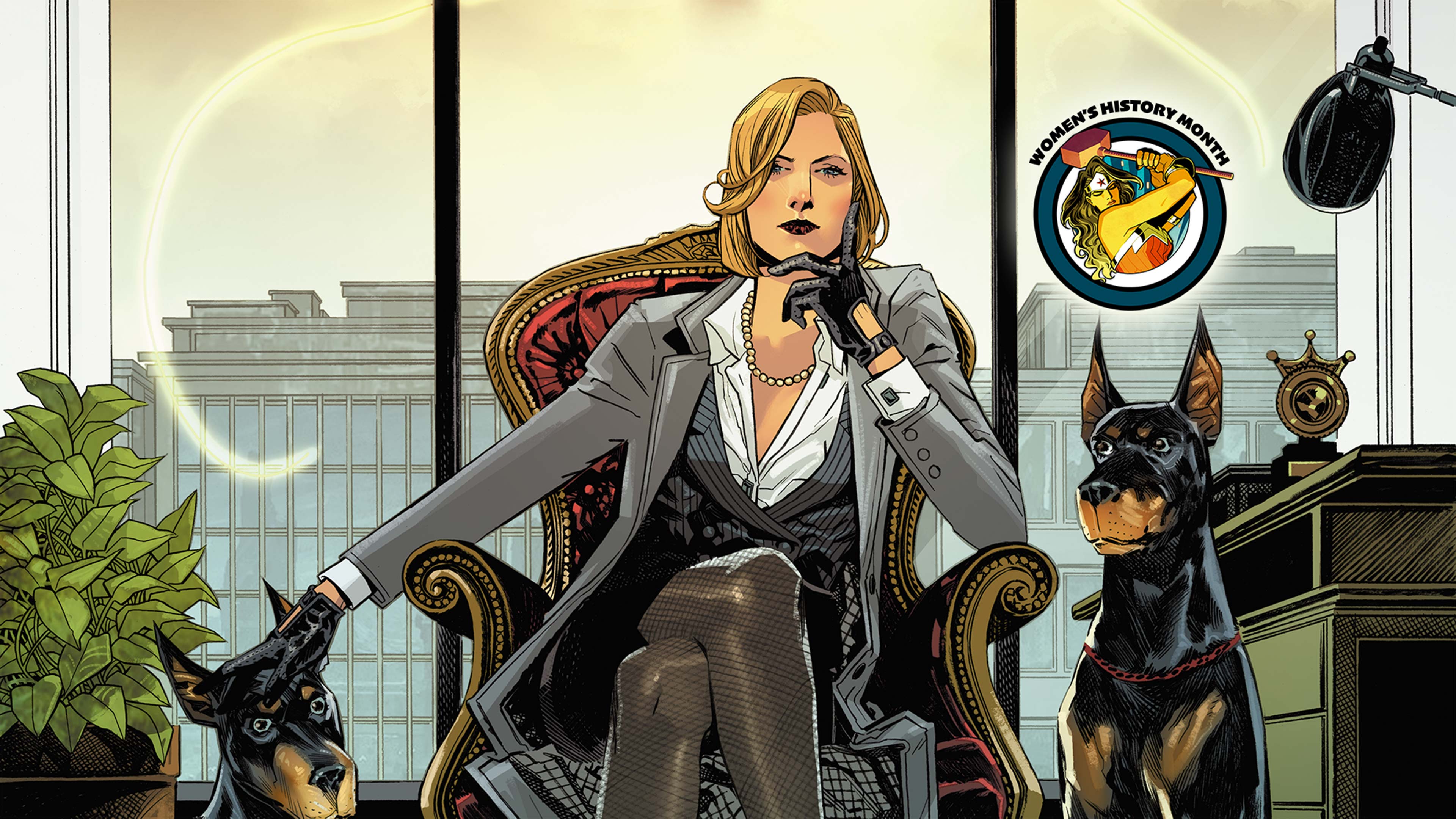 Who Run the World: 8 of the DC Universe’s Most Powerful Women

Who run the world? A group of kickass women! The DC Universe is full of many power-packed ladies, like the Amazon Wonder Woman or the sorceress Zatanna, but today we’re going to be spotlighting a different type of power. Some women have a power that comes solely from their accomplishments. In their own way, they control the world: through leadership, entrepreneurship, and other hidden talents. Strength comes from more than muscles, so -- as part of our Women's History Month celebration -- we’re spotlighting 8 of the DC Universe’s most powerful women... 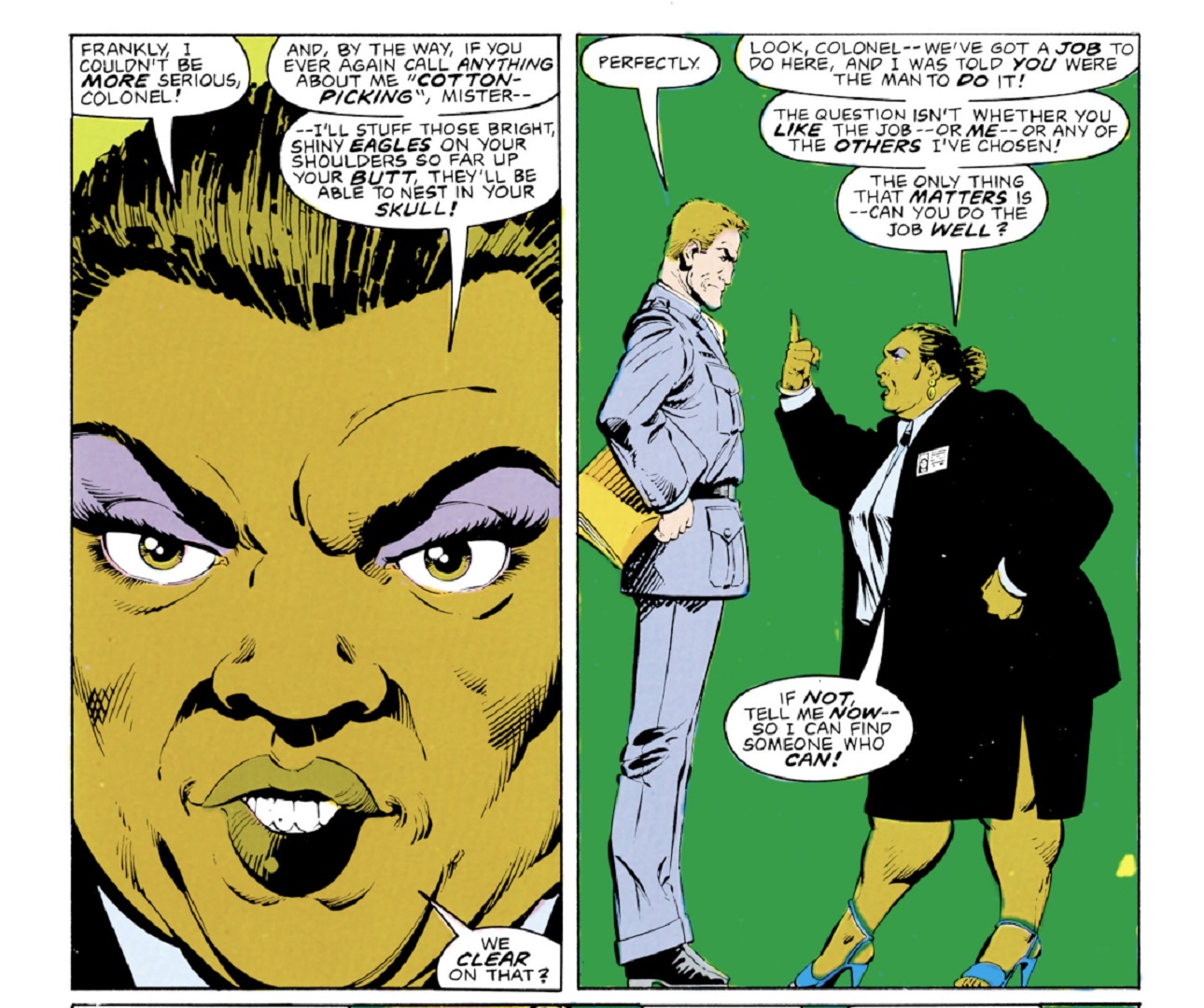 Notable Appearance: Waller kicks butt in every book she appears in, but her most memorable moments come from the 1987 Suicide Squad series.

Why She’s Powerful: Amanda Waller is so powerful that she controls numerous government agencies and politicians who don’t even know she exists! She’s the type of person to stare down someone like Batman or Superman without blinking, or tell a group of homicidal maniacs that she’s in charge. Waller restarted the Task Force X program, which has put her in control of some of the DC Universe’s most dangerous villains. Many people would lose their minds under such pressure, but Waller perseveres. When villains go to sleep, she’s the one they have nightmares about!

Fun Fact: According to 1987’s Secret Origins #14, Amanda Waller has a political science degree. This came in handy when she was chosen to serve in Lex Luthor’s presidential cabinet. 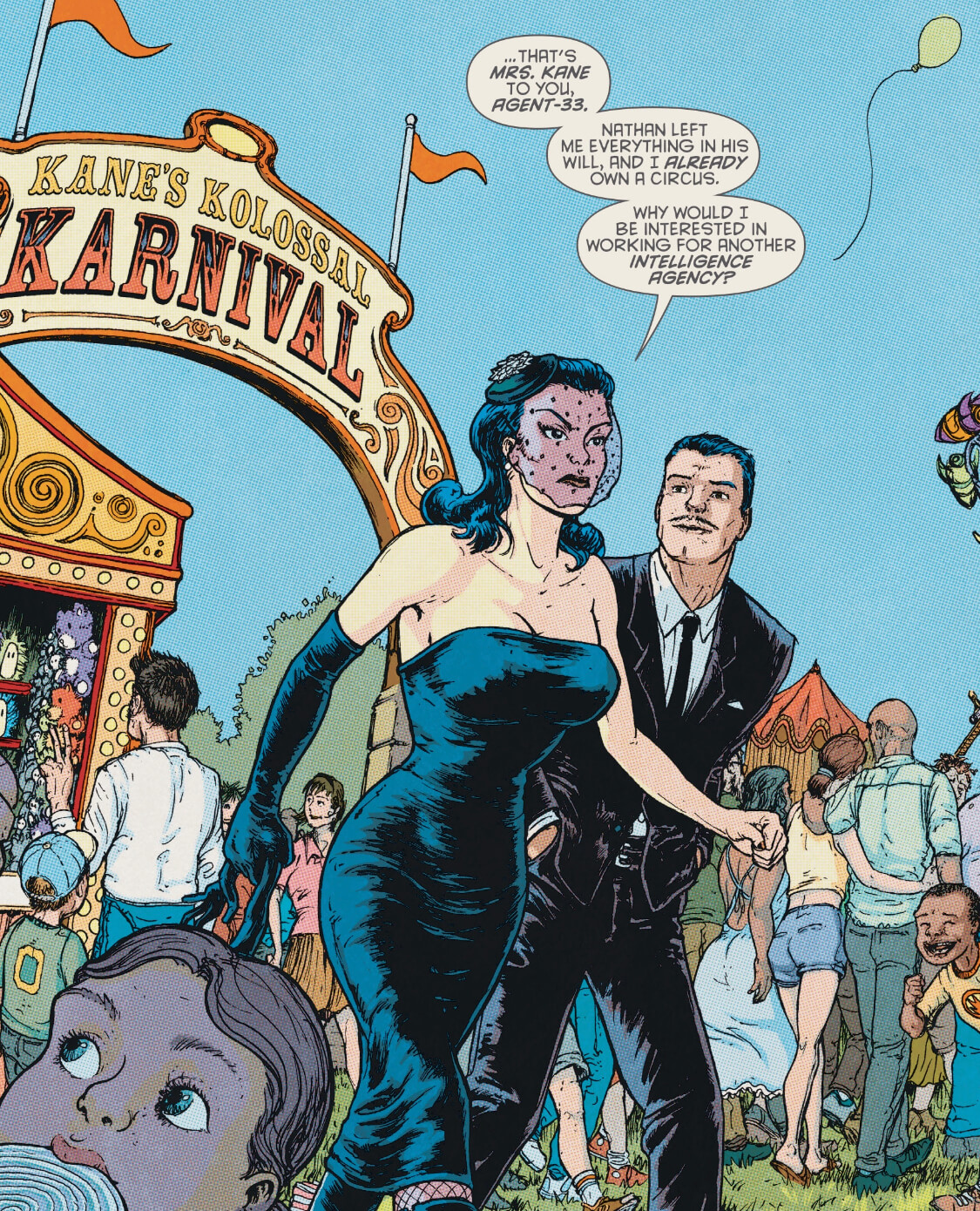 Notable Appearance: For years readers were tricked into thinking Kathy was nothing more than a goofy Silver Age character, but all that changed when Grant Morrison reinvented her in 2011’s Batman Incorporated #4.

Why She’s Powerful: Forget about her often silly tenure as the Silver Age Batwoman, because this Kathy is no joke. She rose through the ranks of the secret organization Spyral, until she controlled the entire agency. As leader of Spyral, Kathy was able to control events from behind the scenes, and pit Batman and Talia Al Ghul against each other without the Dark Knight’s knowledge. Now that’s power! 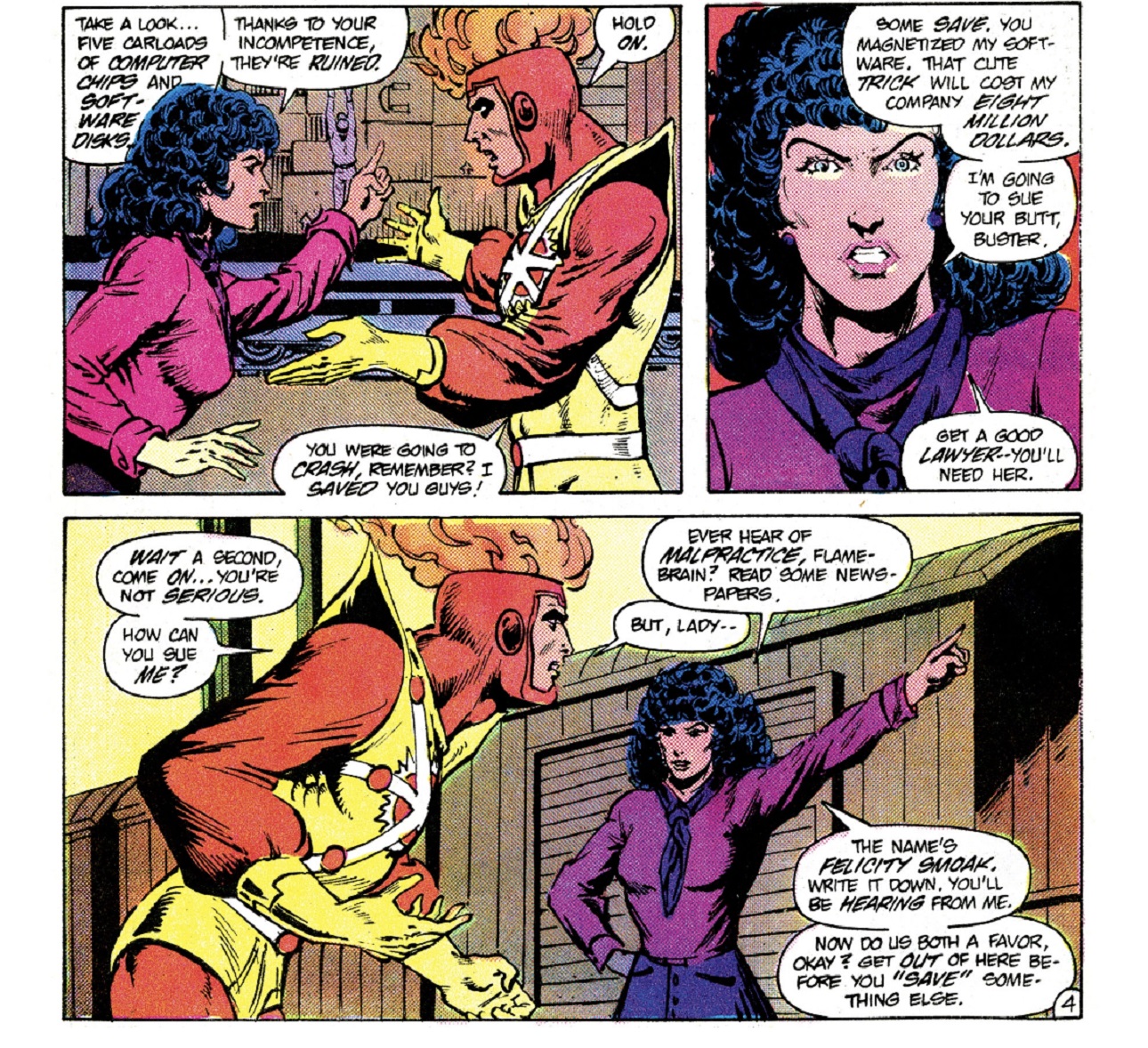 Notable Appearance: Felicity is a regular supporting character in the Fury of Firestorm series, starting with issue #23.

Why She’s Powerful: Felicity is one of the brightest developers in the computer software industry, and she’s used her talents to manage a successful tech business empire. Felicity’s business decisions have led to multimillion-dollar profits, and she isn’t afraid to dress down the superhero community when they cause collateral damage. Just ask Firestorm, who she filed a lawsuit against after he accidentally destroyed some of her computer storage units.

Fun Fact: Although many modern DC fans know Felicity as Oliver Queen’s television wife, in the comics she was married to Ed Raymond, which made her Firestorm’s stepmother. 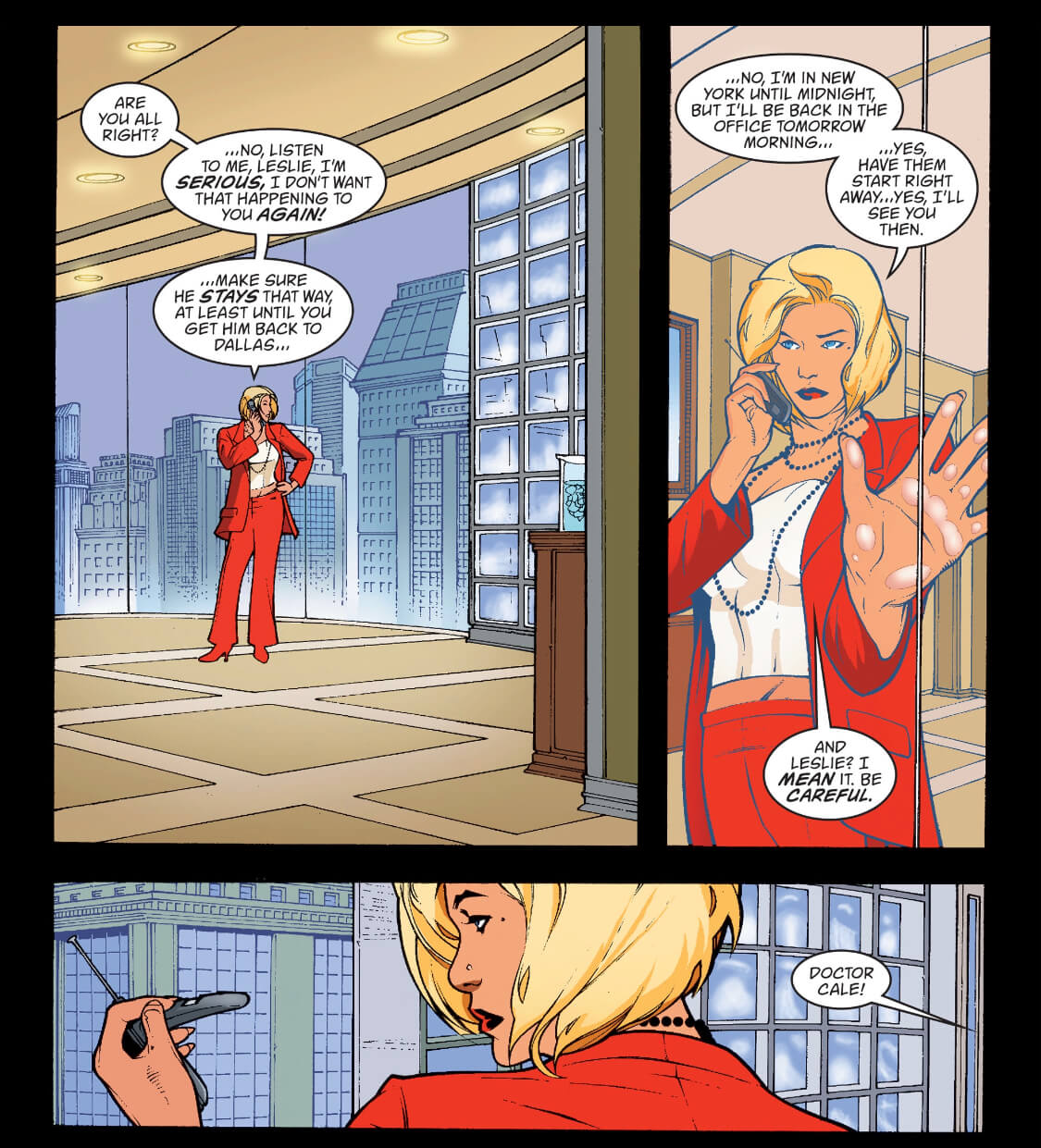 Notable Appearance: If you want to get a sense of who Veronica Cale is, we’d recommend her appearances in writer Greg Rucka’s Wonder Woman run (starting with issue #196), and watching the animated movie Wonder Woman: Bloodlines. Make sure you don’t turn it off during the credits!

Why She’s Powerful: Veronica Cale is one of the shrewdest businesspeople in the world. Cale came from a poor background, and worked her way through Harvard University. By the time she was 21 she had had earned 3 PhDs. She used her business acumen to start a pharmaceutical company, which grew into an empire over the years. And she’s contributed much to the world of medicine. It’s a shame she wastes so much time trying to battle Wonder Woman. (Spoiler alert: she’s actually evil.)

Fun Fact: In addition to her business successes, Veronica Cale is also the President of Oolong Island, a small island nation near North Korea. When does she have time to sleep? 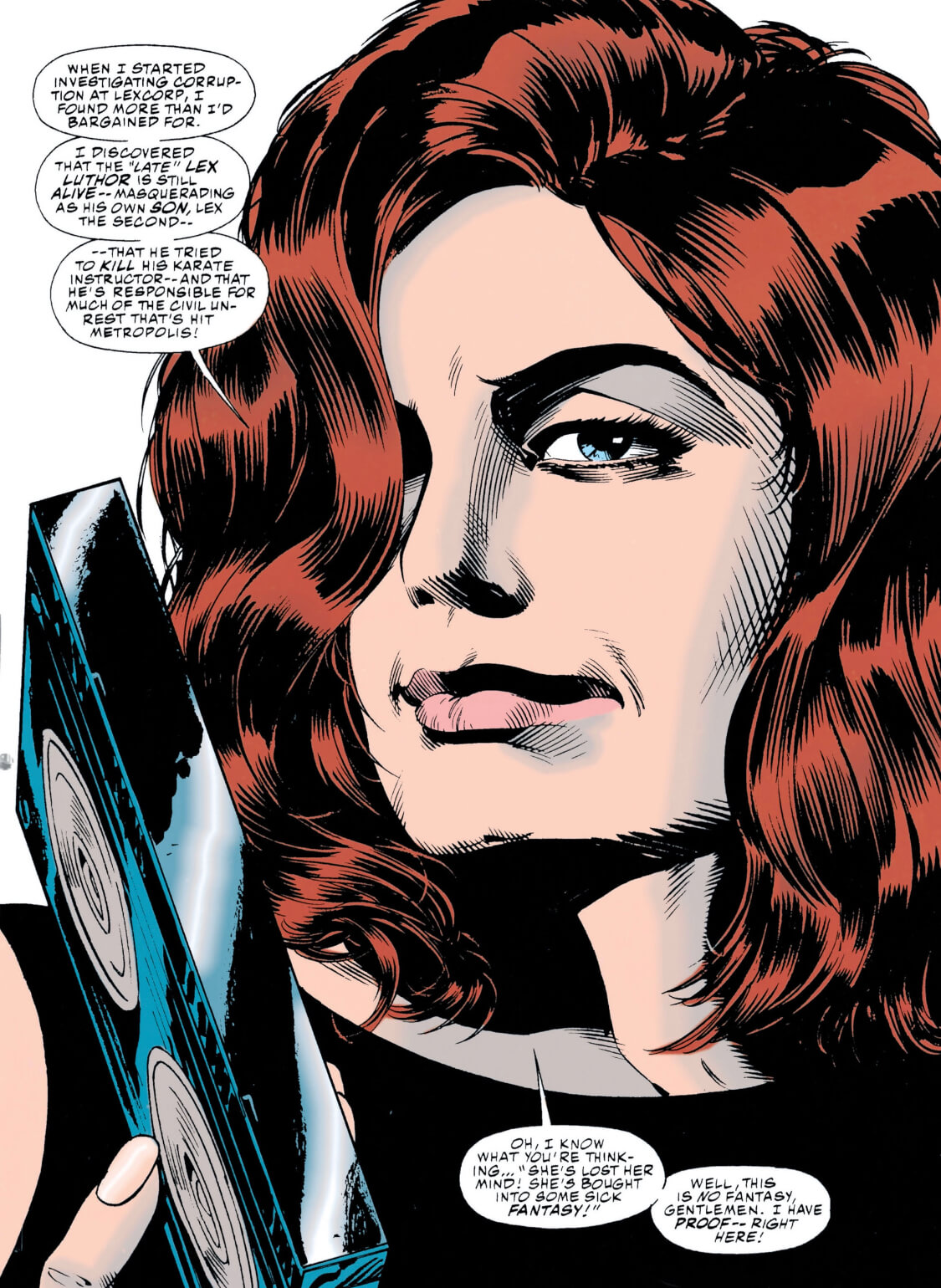 Why She’s Powerful: They say the pen is mightier than the sword, and in Lois’s case that’s never been more accurate. Lois Lane’s Pulitizer-winning reporting has taken down business moguls, exposed corrupt world leaders, and even had a hand in ending the Luthor presidency. Lois is a reporter who always gets her story, and, because she has her finger on the "Publish" button of the most powerful newspaper on Earth, her stories have changed the world.

Fun Fact: In Adventures of Superman #585 Lois learned a Kryptonian Martial Arts technique called Torquasm Rao, which allows her to tune her body to alternate dimensions. 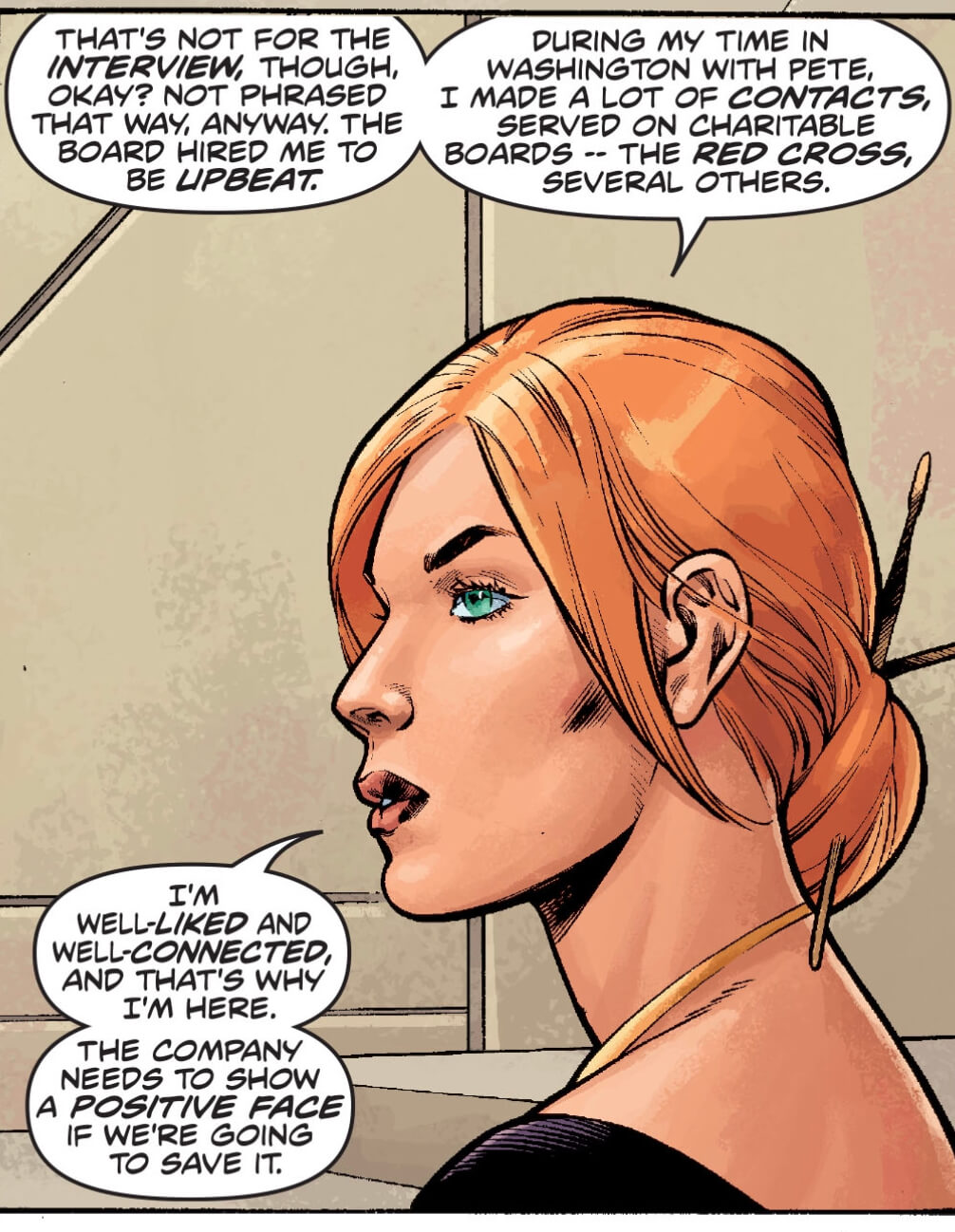 Notable Appearance: Lana Lang starred in 2016's Superwoman title, where she learned what it was like to be a fulltime superhero.

Why She’s Powerful: Some may question why Lana is on this list in addition to Lois Lane, but Superman’s childhood sweetheart has an impressive resume of her own. During the Bronze Age of comic books, Lana was an award-winning journalist, who even helped organize a Middle East peace conference. Her Post-Crisis incarnation held the title of First Lady of the United States, even though her husband Pete Ross's presidency was brief. After her time in Washington D.C. came to an end, Lana was appointed CEO of Lexcorp in Superman #654. Imagine having a career like that!

Fun Fact: In addition to all the above facts, the Silver Age version of Lana was a member of the Legion of Super-Heroes, fighting evil as the Insect Queen. 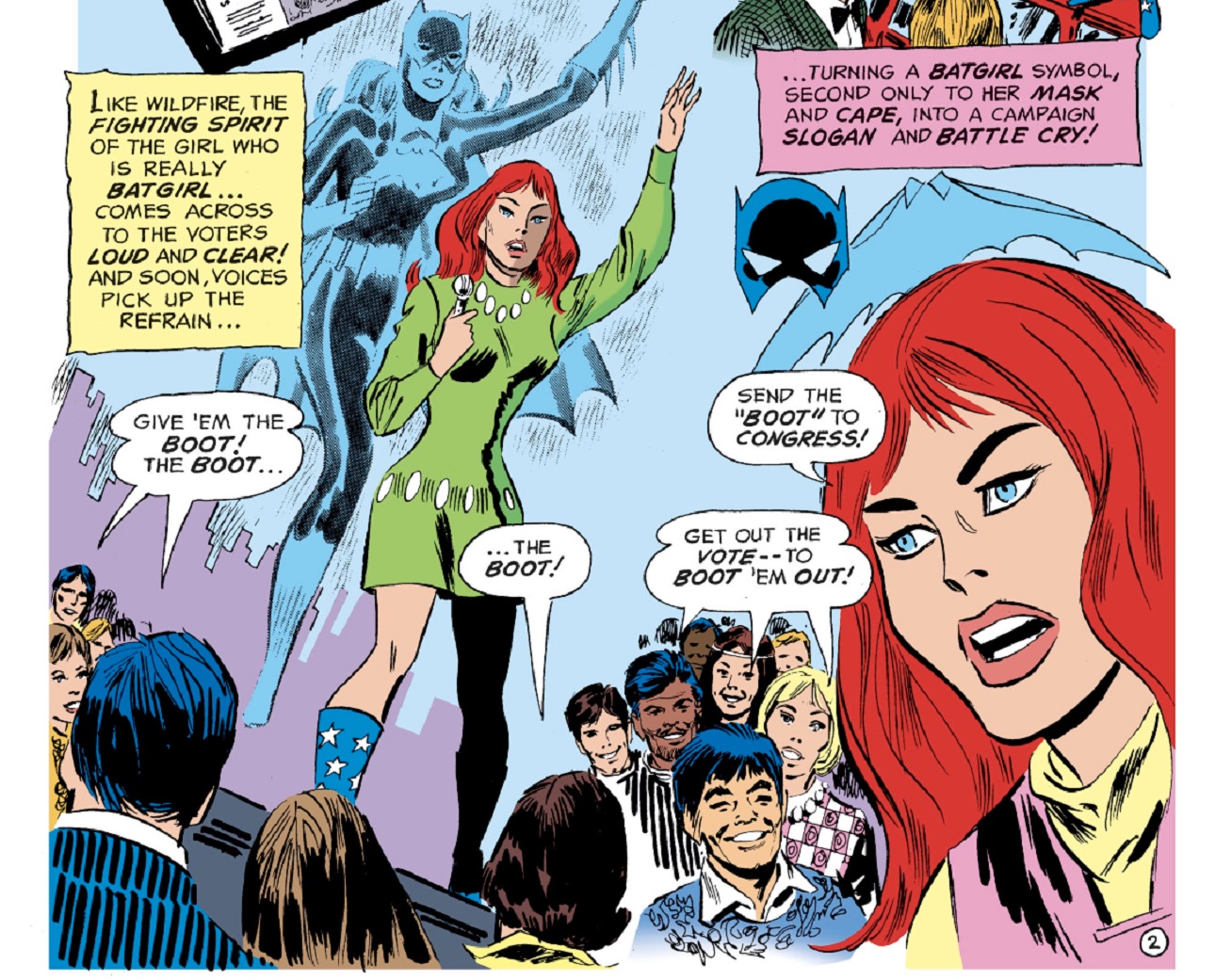 Notable Appearance: If you want to see why Barbara is one of the strongest women in the DC Universe, then check out the story “Oracle: Year One” from Batman Chronicles #5.

Why She’s Powerful: Even if we ignored everything she’s done as Batgirl, Barbara has proven to be one of the most influential women in the DC Universe. She won a difficult congressional election in Detective Comics #424, and served a full term as a member of the United States House of Representatives. How many other superheroes can claim the same? As the superhacker Oracle, Barbara was an indispensable member of the superhero community, and her quick thinking saw her save the world many times over without leaving her chair.

Fun Fact: Barbara Gordon is also a licensed attorney. In Batman: Gotham Knights #25 she revealed she took the bar exam for fun. Would you believe she passed? 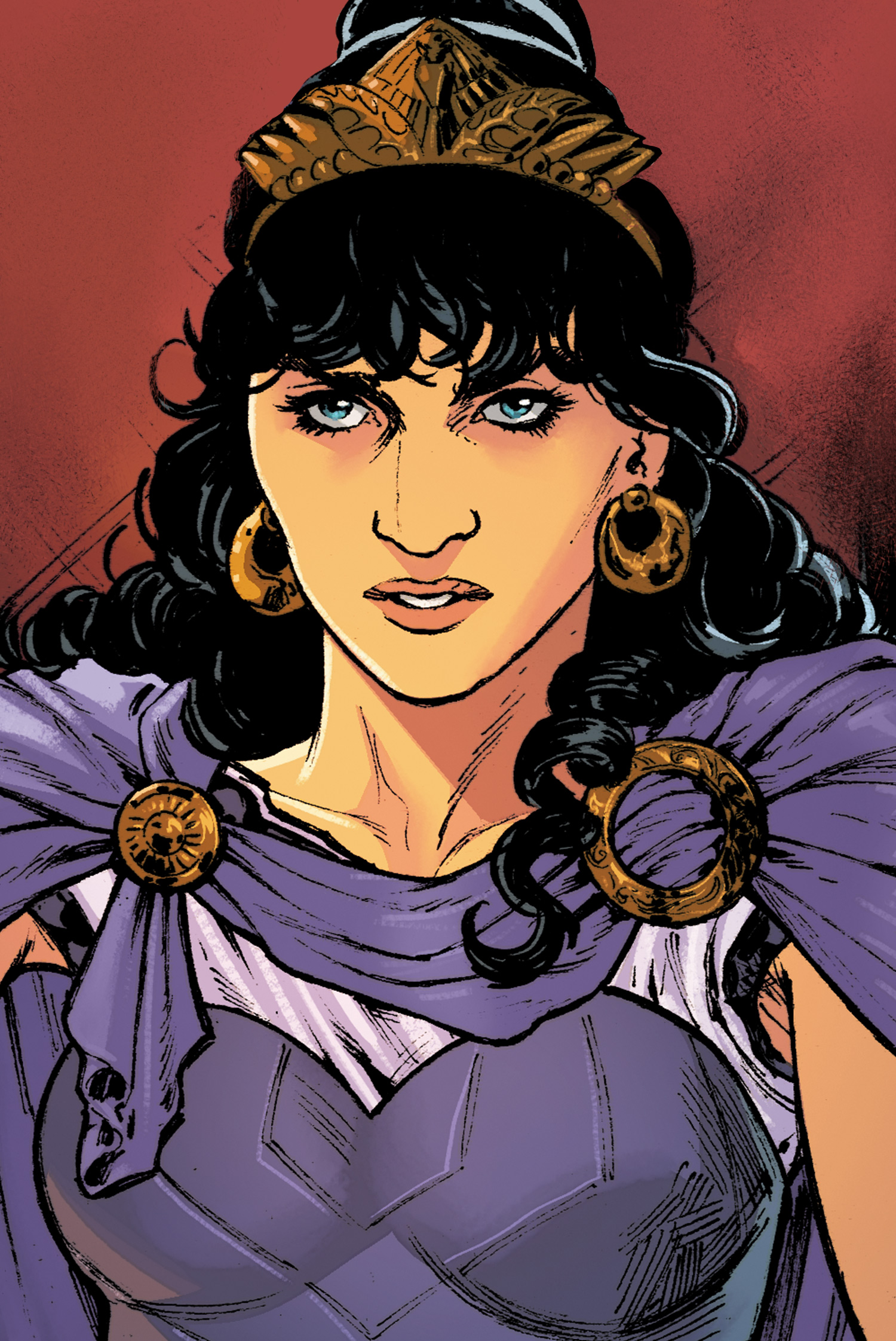 Notable Appearance: In 1998’s Wonder Woman #131, Hippolyta traveled back to World War II and became the first Wonder Woman. She even fought alongside the Justice Society.

Why She’s Powerful: Forget about her super-strength, Hippolyta is powerful because of her inspiring leadership. She leads an entire island of Amazons who are willing to lay down their lives to protect their queen and home. Although Themyscira has had some brief political upheavals over the years, Hippolyta’s tenure as queen of the Amazons has been a resounding success. Themyscira doesn’t have to deal with many of the crimes and controversies the outside world faces. There’s a reason they call it Paradise Island, and without Hippolyta that might not be the case.

Fun Fact: According to 1987’s Wonder Woman #1, Hippolyta’s body draws it’s strength from Themyscira, which means as long as she stays on the island, she doesn’t need to eat or drink to survive.

Which powerful woman would you include in our list? Head on over to our Community and let us know!