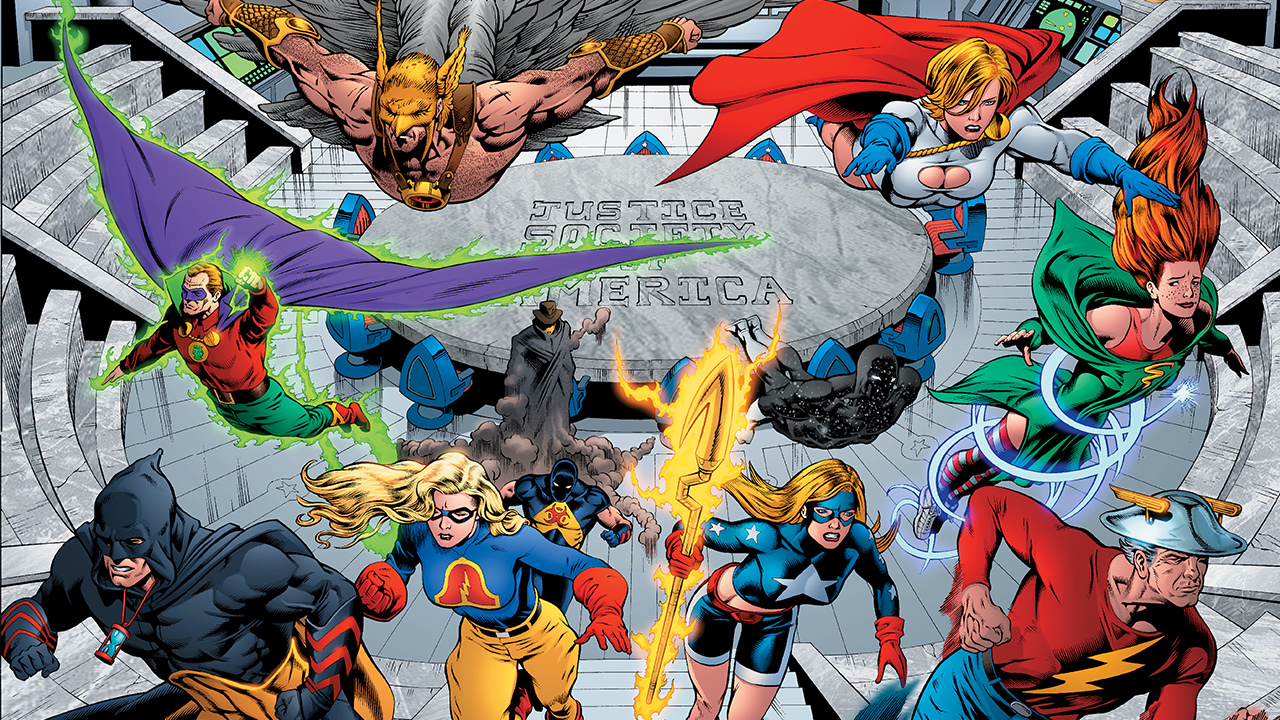 Some things never go out of style – like liberty, justice, and wholesome superheroic action. Before the Justice League hit the scene, comic book readers thrilled to the adventures of the Justice Society of America, DC’s first superhero team. This mighty group of heroes set the stage for every team that followed them and inspired generations of future champions, including those featured in DC Universe's Stargirl. And some of their exploits are among the greatest stories in DC history. If you’re curious, then check out our handy guide for where to start reading Justice Society comics. From the frontlines of World War II to modern-day intergalactic adventures, there’s a treasure trove of JSA classics awaiting you! Let’s dive in...

“The Injustice Society of the World”

THE STORY: Before the Legion of Doom, and before the Injustice Gang – the world trembled in fear at the might of the Injustice Society of the World. The Justice Society of America’s greatest enemies combine their resources to form their own villainous supergroup and carry out a divide-and-conquer strategy against the heroes. During a time when most Golden Age stories were less than 13 pages long, this book-length tale took comic readers by storm as the JSA was put through the ringer by their villainous counterparts across 39 epic pages!

WHAT’S NEXT: If you enjoyed reading the old school adventures of DC’s first super team, check out the rest of their Golden Age stories in ‘All-Star Comics’ #3-57.

BONUS: A group called the Injustice Guild of America, based off of the Injustice Society, appear as the antagonists in the 2002 ‘Justice League’ episode “Legends.”

THE STORY: The criminals of Earth-One and Earth-Two have swapped places, leading Earth-Two's Justice Society to join forces with their Earth-One counterparts, the Justice League, for the first time in order to stop this new threat. With their greatest enemies uniting, even the combined strength of both teams has trouble countering the threat, leading the Society and the League to become trapped between two worlds. This exciting tale is considered one of the turning points of the Silver Age, and it was so well received that it led to a tradition of annual team-ups between the Justice League and their predecessors. In an age before reality spanning team-ups were common place, writer Gardner Fox turned the DC Universe on its head with this story, the resonance of which on the medium is felt to this day.

WHAT’S NEXT: The Justice Society and the Justice League joined forces next in ‘Justice League of America’ #29-30, where the two groups head to Earth-Three to take on a world of villains!

THE STORY: Decades before another comic book company had its premiere super-team divided by in-fighting, DC's Justice Society had its own civil war. When Bruce Wayne, who is now Earth-Two’s Gotham City Police Commissioner, orders the arrest of the Justice Society, the heroes find themselves on the other side of the law. As if that wasn’t bad enough, the JSA must face their own teammates, when five members of their roster choose Commissioner Wayne’s side and attempt to bring them in. What did the Justice Society do, and why has Bruce Wayne turned against his former friends? Can the heroes pull themselves together before their civil war tears them apart? Writer Paul Levitz and artist Joe Staton’s 1970s take on the Justice Society is fondly remembered by fans, and thanks to high-stakes stories like this, it’s easy to see why.

WHAT’S NEXT: To learn about the origin of the Huntress (the daughter of Earth-Two's Batman and Catwoman), check out ‘DC Super-Stars’ #17.

BONUS: This story features the first appearance of the Huntress, a character who has been adapted in various forms of media, including a starring role in the 2002 ‘Birds of Prey’ TV series.

“The World on Fire”

THE STORY: From the ashes of the Justice Society comes a new group of freedom fighters known as the All-Star Squadron. After their former teammates go missing, Dr. Mid-Nite, Hawkman, and the Atom form a team  to help defend America from the invading Axis forces. The new group must save the Justice Society, keep the timestream from collapsing, and help America win World War II—a pretty hefty set of objectives for their first time out! Comics veteran and Justice Society's number one fan Roy Thomas brings his old-school sensibilities to the modern era by writing a title where the adventures feel both timeless and vintage.

WHAT’S NEXT: Check out the rest of ‘All-Star Squadron’ for more generation-spanning battles between good and evil.

BONUS: The Justice Society were presented as former mentors of the Caped Crusader in the ‘Batman: The Brave and the Bold’ episode “The Golden Age of Justice.”

“America vs. the Justice Society”

THE STORY: After the death of Earth-Two’s Bruce Wayne, the discovery of his diaries led to a shocking accusation – the Justice Society of America had aided the Nazis during World War II! The aftermath of the diaries' revelations leads to the arrest of the Justice Society, and an investigation into their activities. Over the course of the investigation, the JSA’s history is thoroughly explored as their greatest comic-book cases are examined in flashbacks. In addition to being a thrilling story, this limited series is also a great primer for any Justice Society fan. Roy Thomas and his wife Dann team up to tell a story that’s part retrospective and part mystery. Are Batman’s diaries forgeries, and if not, what could cause Bruce Wayne to accuse America’s greatest heroes of treason?

FOR FANS OF: Political intrigue, mysteries, post-mortem revelations, Nazi hunters, and the Batman.

WHAT’S NEXT: Check out the series ‘Infinity Inc.’ to discover a new team of heroes inspired by their Justice Society mentors.

BONUS: If you’ve been watching DC Universe's ‘Young Justice: Outsiders’ you may have noticed former Justice Society member Jay Garrick refer to his bad memories of government oversight in the episode “Elder Wisdom.”

“The Return of the Justice Society”

THE STORY: After the events of 1984-1985's ‘Crisis on Infinite Earths’ folded the Justice Society’s history onto a new condensed timeline, the group spent a few years in limbo before stepping into the spotlight again for their next series. Set in the 1950s, this 1991 limited series finds the Justice Society reuniting to take on living constellations that have begun attacking the heroes under mysterious circumstances. What role does Vandal Savage play in all of this, and how can the Society take on the stars themselves? The story takes a humorous turn when the heavenly stars become Hollywood stars as they take on the forms of some notable 1950s television personalities. If you want a fun JSA romp, look no further than this tale. Writer Len Strazewski fires on all cylinders, capturing the spirit of the Society’s Earth-Two adventures and bringing them into the Post-Crisis landscape.

FOR FANS OF: Astronomy, 1950s television, and mythology.

WHAT’S NEXT: See Ted Knight pass the Starman mantle on to his son Jack in the 1994 ‘Starman’ series.

WHERE TO FIND IT: ‘Justice Society of America’ #1-8

BONUS: If this series leaves you hungry for more of the JSA's Black Canary, then check out her appearance in the ‘Justice League Unlimited’ episode “The Cat and the Canary.”

THE STORY: What does a soldier do after the war has ended? Set in the 1950s, this limited series finds the Justice Society's members struggling to adjust to their new lives in a post-war era, and deal with McCarthyism, the Red Scare, and post-traumatic stress disorder. James Robinson’s stunning script for this tale earned him an Eisner Award nomination, as well as critical praise from peers and fans alike. Although this is an "Elseworlds" tale, many elements from this story have been brought into mainstream DC continuity, forever cementing its legacy. For a deeper look at this celebrated series, check out our examination of it here.

FOR FANS OF: Watchmen, Elseworlds, lawmakers vs lawbreakers, and historical fiction.

WHAT’S NEXT: For another Justice Society "Elseworlds" story, check out ‘JSA: The Liberty Files.'

THE STORY: Inspired by the success of the late 1990s ‘JLA’ series, the Justice Society was revived in a sister title. This series features a generational mismatch as a group of younger heroes, including Stargirl, join the elder statesman to make up one of the greatest Justice Society rosters yet. The evil Dark Lord has targeted the next Doctor Fate, and it's up to the recently reunited Justice Society to hold the line and repel the villain. Celebrated comics writer James Robinson is joined by famed screenwriter David S. Goyer, and together they produce one of the most entertaining runs in JSA history.

WHAT’S NEXT: The heroes take on a mysterious army of shadows in a storyline called “Darkness Falls” that ran in ‘JSA’ (1999) #7-9.

THE STORY: The ‘Kingdom Come’ version of Superman finds himself transported to the main DC Universe continuity, and seeks to stop that Earth from going down the same destructive path his world faced. An omnipresent being known as Gog claims to be a benevolent force that wants to help Earth, but some members of the Justice Society are suspicious of his intentions. Is Superman just being paranoid, or will Gog do to this Earth what Magog did to the Man of Steel’s world? During this trying time, the Justice Society holds a recruitment drive and inducts a new set of iconic heroes to their roster. Geoff Johns pens this multi-part epic, while Alex Ross teams up with Dale Eaglesham on illustrations, giving the art an extra dose of prestige.

WHAT’S NEXT: Dive deeper into the world of the Justice Society by checking out ‘JSA: Classified’ featuring rotating solo stories starring the team’s greatest members.

BONUS: This storyline introduced Lightning, the daughter of the superhero Black Lightning. To see Lightning and her sister Thunder in action, check them out in the fun animated DC Nation Shorts: Thunder and Lightning.

EXTRA BONUS: Be sure to check out our interview with veteran Justice Society writer Roy Thomas!

What are your favorite Justice Society stories? Let us know in our Community!