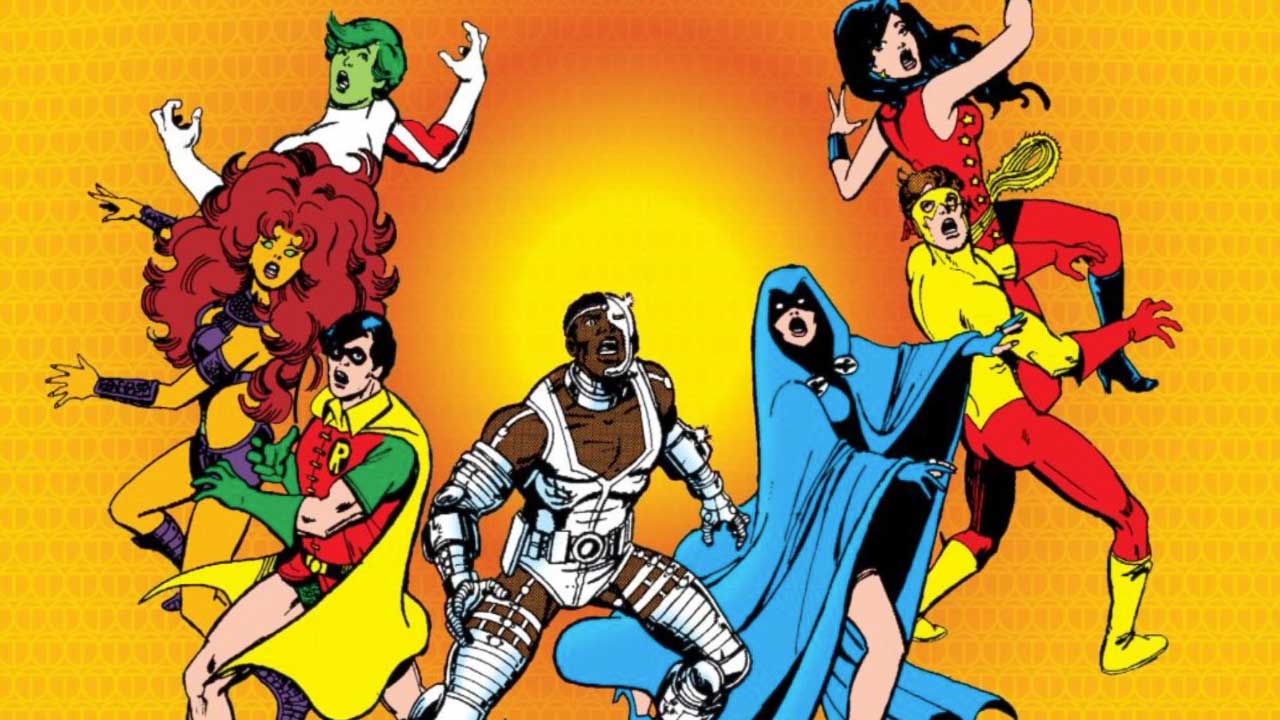 Titans Together! Whether you grew up watching the Teen Titans cartoon, or were addicted to the first season of the live-action Titans show, we have a Teen Titans comic for you. With over 20,000 comics in our digital library, diving into the Titans history can be more intimidating than a battle with Deathstroke, but we've got you covered! If you’re not sure where to start, check out our handy list straight from the meeting room at Titans Tower... 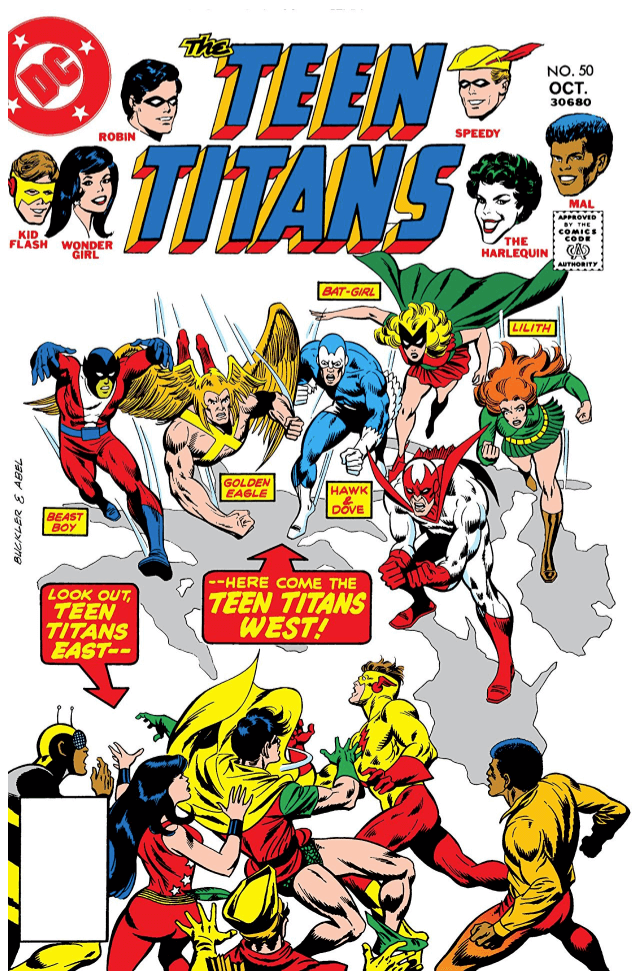 THE STORY: When a mysterious villain called Captain Calamity strikes, a group of California-based super heroes come together to form a west coast branch of the Teen Titans. Before long, east meets west as the teams find themselves face to face with one another thanks to the manipulative Captain Calamity. The story arc concludes by revealing the previously untold tale of how the Teen Titans formed, before the current group breaks up to pursue solo careers. Writer Bob Rozakis and artist Don Heck craft a fun tale bringing fan-favorite heroes into the fold as they close the chapter on the first incarnation of the Teen Titans.

FOR FANS OF: If you loved Hawk and Dove from season 1 of Titans, you’ll dig how they’re utilized in this story. This comic is also a fun read for fans of Bronze Age comics, superhero team-ups, and light-hearted action.

WHAT’S NEXT: Check out Hawk and Dove Annual #1 for a special Titans West reunion story.

BONUS: For a fun take on the Titans West concept, check out the animated Teen Titans episode “Calling All Titans.” 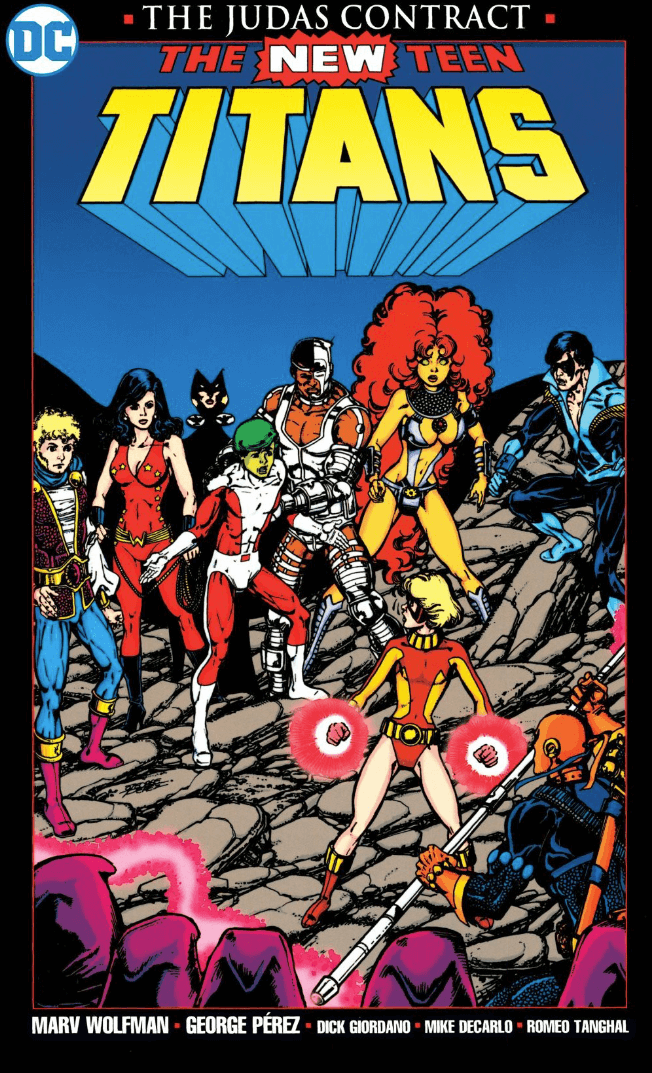 THE STORY: The Teen Titans have been so busy focusing on repelling attacks form their enemies, that they haven’t noticed the threat that lies within their own ranks. The Titans foe Deathstroke has secretly placed his double-agent Terra into their group, and she’s been feeding all of their secrets back to the enemy. When Terra and Deathstroke finally strike, the team is caught off guard. Can the group recover from this emotionally shattering blow, or will Deathstroke and Terra have the last laugh? This story is seen as the gold standard from the legendary run of writer Marv Wolfman and artist George Perez. The events of this story left many permanent changes to the larger DC Universe, including Dick Grayson becoming Nightwing and the introduction of Deathstroke's son, Jericho.

FOR FANS OF: Readers who love spy thrillers will be on the edge of their seats as Terra takes down the Titans from within, in addition to the espionage intrigue from Adeline Wilson. Lovers of the character Dick Grayson will also enjoy witnessing his first outing as Nightwing.

WHAT’S NEXT: The conclusion of this story left some emotional scars for Changeling. Read Tales of the Teen Titans #55 to see him confront Deathstroke as the two find some sense of closure in the days following her death.

BONUS: Unfortunately, Terra seems to be just as duplicitous across various adaptations, such as the animated Teen Titans episode “Aftershock,” the 2017 animated film Teen Titans: The Judas Contract, and the cliffhanger ending for the Young Justice: Outsiders episode “True Heroes.”

“The Terror of Trigon” 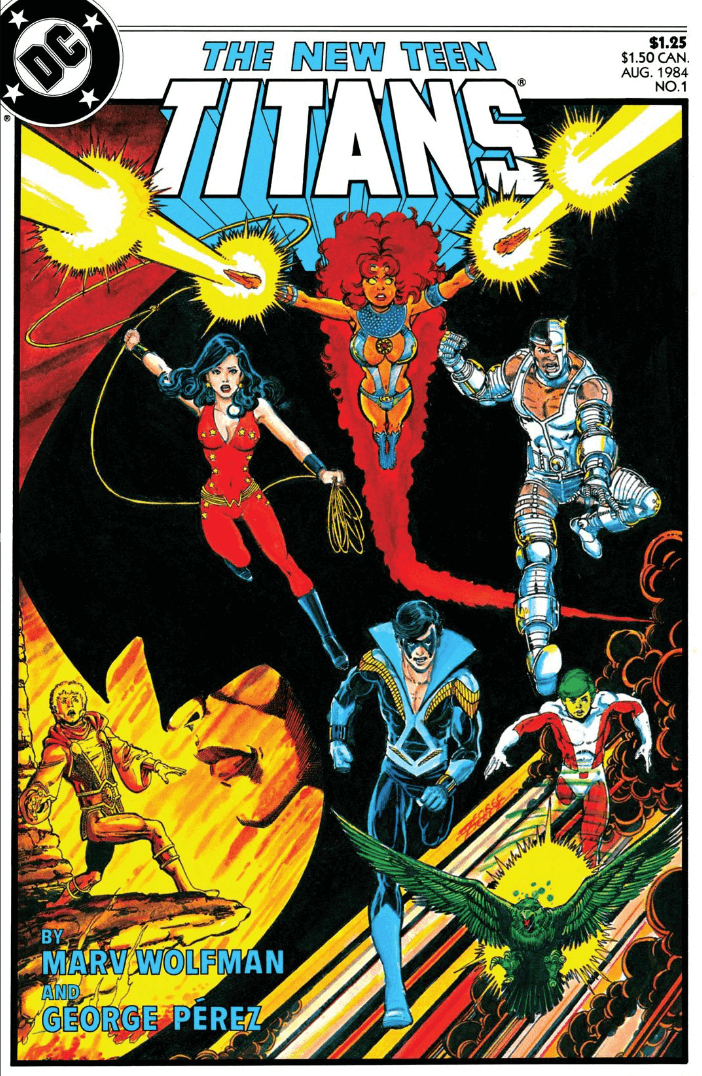 THE STORY: For years, Raven has struggled to keep her demonic father Trigon at bay and suppress her own inner darkness. Now Raven’s worse fears have come to pass, as Trigon breaks free and corrupts his daughter for his evil purposes. Evil has won, and the stakes have never been higher as the Teen Titans are the last ones standing in a world ruled by the demonic father and daughter. Marv Wolfman and George Perez are back in one of their greatest collaborations as they push the Teen Titans to the limit in this magnus opus.

FOR FANS OF: Lovers of horror and the supernatural won’t be able to put this story down! If you watched Titans and enjoyed Raven’s arc there, this comic is a foreboding look at her dark potential.

WHAT’S NEXT: If you love the team of Marv Wolfman and George Perez, check out “Who is Donna Troy?,” one of their most celebrated stories.

BONUS: Check out how the animated Teen Titans series adapted this storyline in the 3-part episode “The End.” 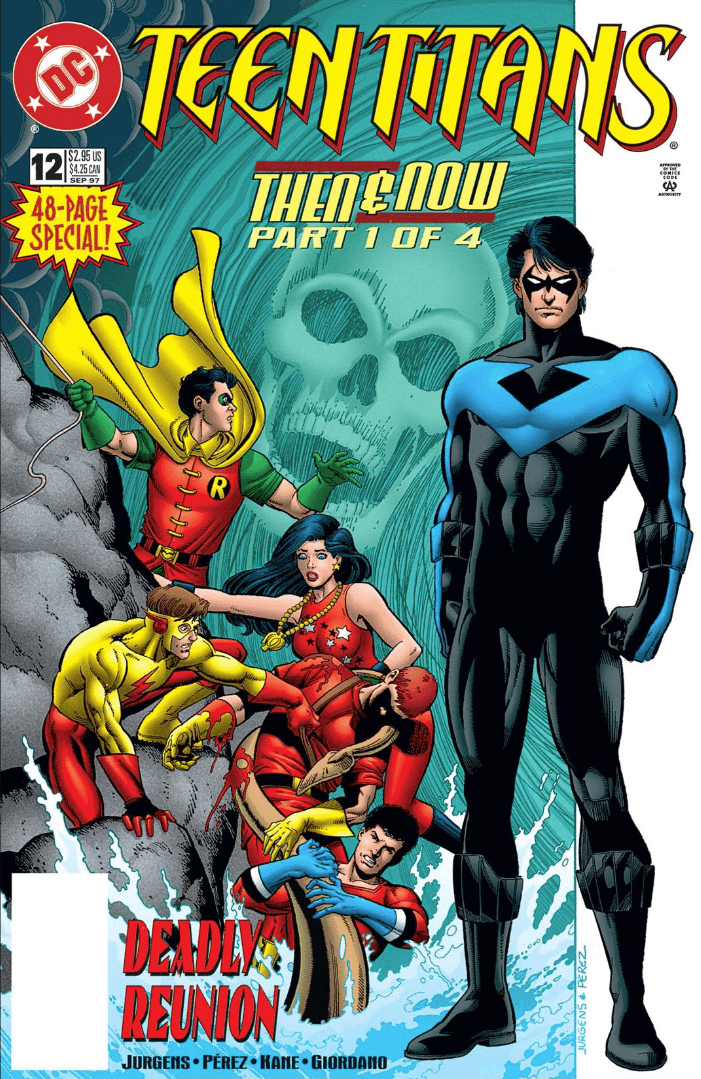 THE STORY: The original Teen Titans (now all grown up) reunite to investigate the mysterious disapearence of their former mentor Loren Jupiter. Along the way, they team up with the Atom’s new group of Titans to take on the mental powers of the villainous Haze. This storyline shakes up both teams as Omen’s secret identity is finally revealed, and one Teen Titan doesn’t make it out alive. Dan Jurgens collaborates with Titans legend George Perez for this generational team-up that rocked 1990's comic shops.

FOR FANS OF: This story arc is a must for fans of the original Teen Titans and has some great callbacks to the Silver Age. If you enjoyed Dan Jurgens' art on the legendary “Death of Superman” story, check out how he handles the Teen Titans here. 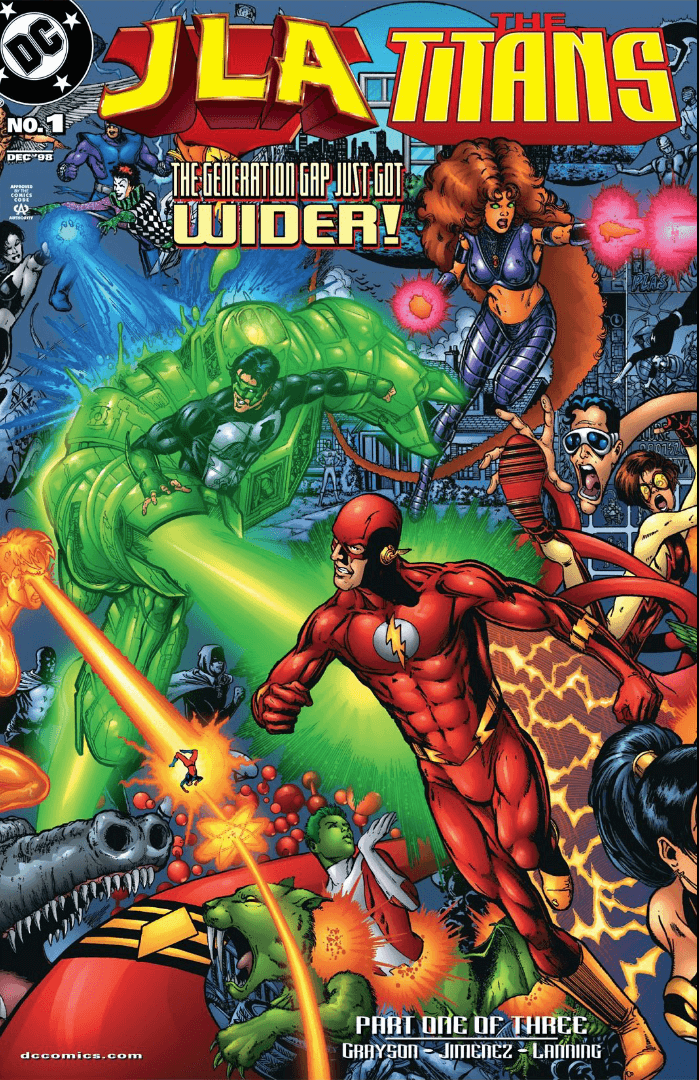 THE STORY: A technological entity begins kidnapping everyone who has ever been a Teen Titan, attracting the attention of the Justice League. When the Teen Titans discover that the entity is their old ally Cyborg, they hope to free him from the virus and return him to his human form. Unfortunately, the Justice League wants to neutralize the threat, putting the Teen Titans against their mentors in one of the biggest super hero battles the world has ever seen. Writer Devin Grayson crafts a tale that shows the heart and soul of the Teen Titans against the backdrop of a heavy science-fiction battle, while artist Phil Jimenez produces some of the finest work of his career as he illustrates every single Teen Titan…ever!

FOR FANS OF: If you love any part of the DC Universe, chances are there is something in this limited series for you. Almost every character from the late 1990s is represented and gets their time to shine. Fans of Grant Morrison’s legendary JLA run will love seeing the team go up against the Titans in one of the heaviest superhero brawls ever drawn.

WHAT’S NEXT: This limited series served as the launching pad for Devin Grayson’s ongoing Titans series. 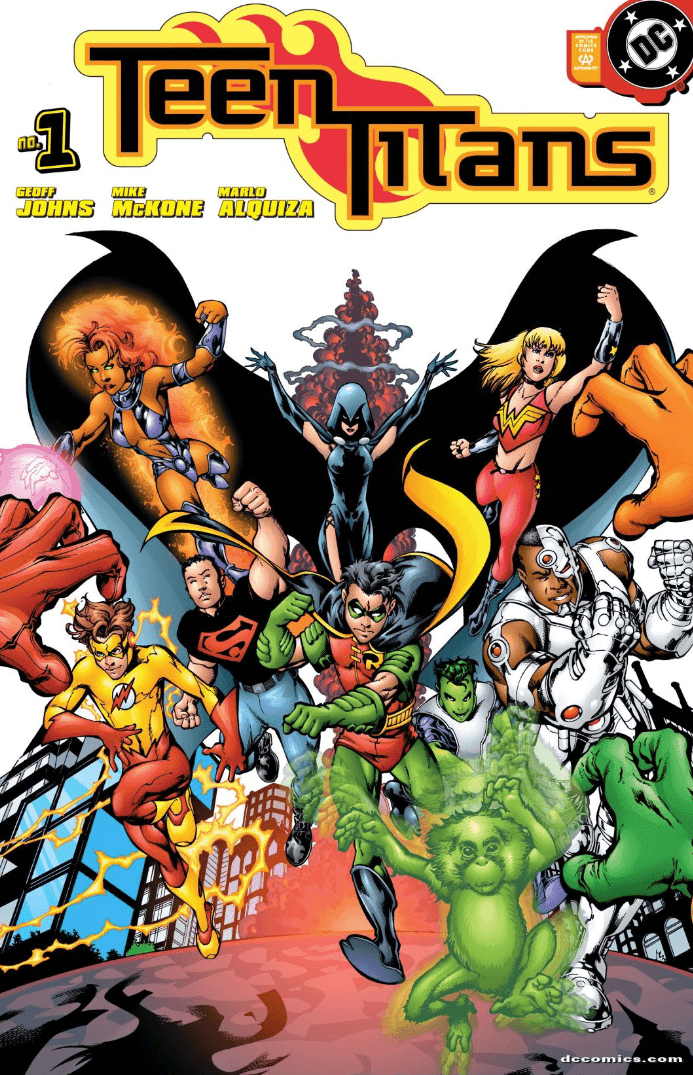 THE STORY: When the death of Donna Troy leaves the super hero community shattered, Cyborg, Starfire and Beast Boy decide to reform the Teen Titans as a school for young heroes. Their first students are Robin, Superboy, Impulse, and Wonder Girl, who are still reeling from the recent tragedy. The new team is soon put to the test when an injury changes Bart Allen’s life forever, and Superboy gets some surprising news about his origins. Writer Geoff Johns and artist Mick McKone begin the next generation of Teen Titans in this classic tale that brought the team back from obscurity.

FOR FANS OF: If you’ve ever binge-watched Young Justice, this is the comic for you. The hit animated series adapted some of the best elements from this run, including Superboy’s storyline featuring Lex Luthor.

WHAT’S NEXT: The team’s next adventure puts them up against Deathstroke and Brother Blood in Teen Titans #7-12.

BONUS: If this storyline gave you a hunger for more Deathstroke, watch him take on the Dark Knight in the 2014 animated movie Son of Batman.

HONORABLE MENTION: If you love the Teen Titans, then check out the Young Justice comic book. This 55-issue series by writer Peter David and artist Todd Nauck features many young heroes who would later join the Titans, in a series of heartwarming and humorous adventures. The comic also helped inspire the fan-favorite Young Justice animated series.

Are you a Teen Titans fan? Let us know in our Community!