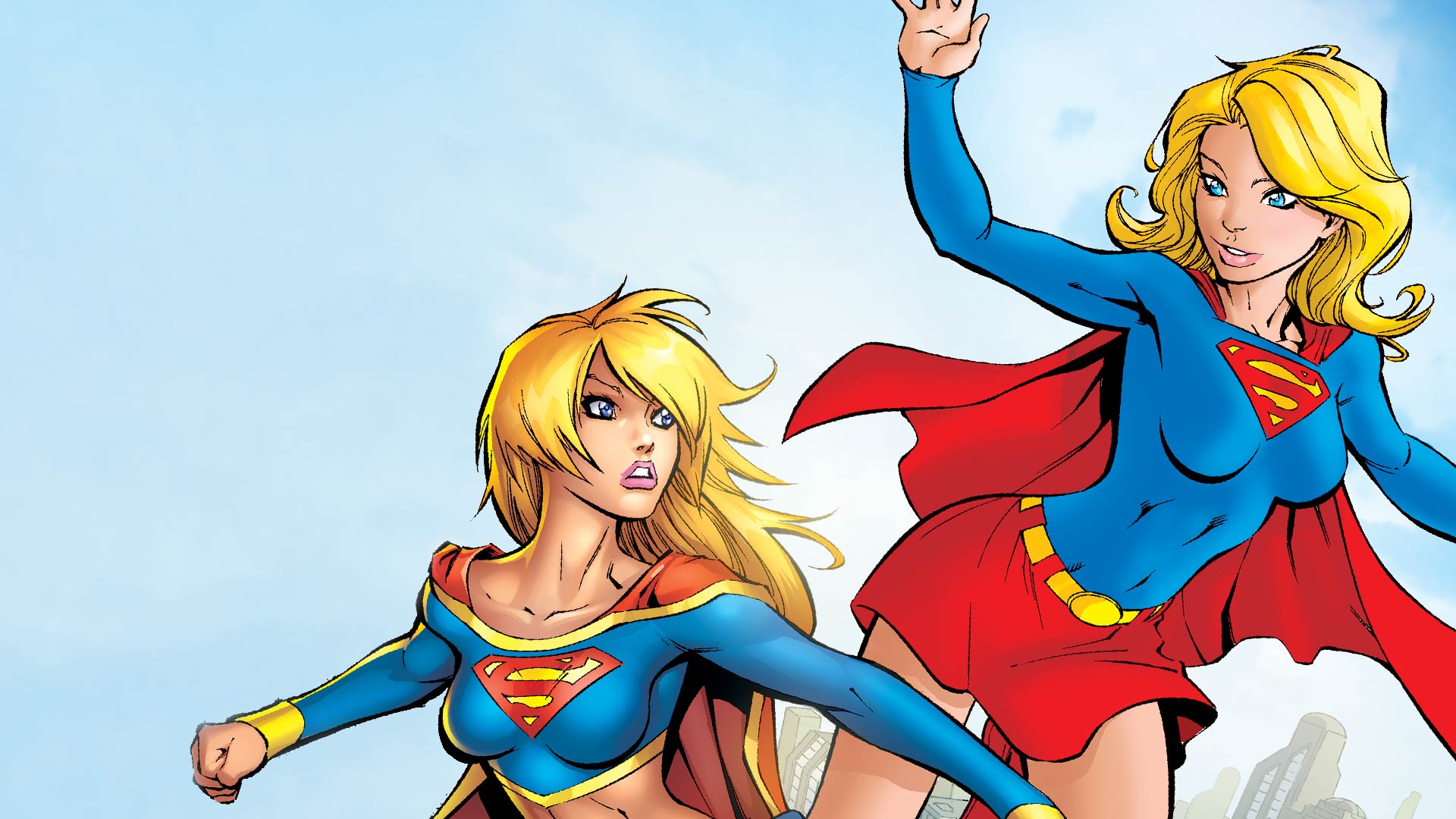 Where to Start Reading Supergirl Comics

The Fortress of Solitude can be a lonely place, but that just means you have more time to read from our epic library of over 20,000 comics. If you’re not sure what to read, why not take some inspiration from the Fortress itself -- by sampling some Supergirl stories! There have been many iterations of the Girl of Steel over the years -- actress Helen Slater may have stolen your heart when she brought the character to the big screen in 1984, or perhaps you’re a fan of Melissa Benoist’s sunny portrayal of Kara Zor-El in her current TV series. No matter how you were introduced to the Maid of Might, there’s a whole world of Supergirl comics waiting to bring you joy. Not sure where to start? Here’s our recommendations…

“The Supergirl from Krypton” 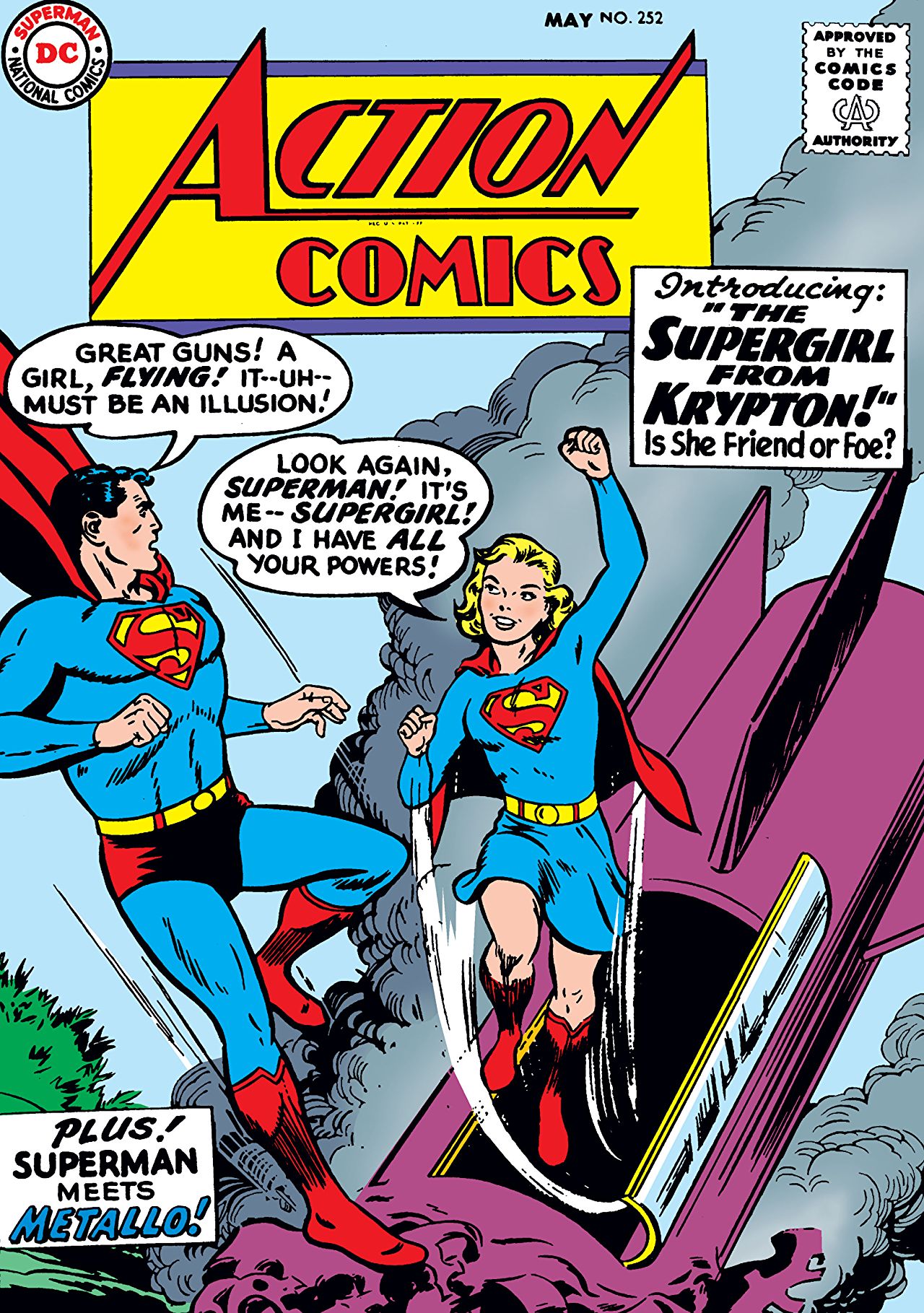 THE STORY: For years, Superman thought he was the last survivor of his doomed race, until one day a teenage girl flew out of a crashed rocket. Superman was then introduced to Supergirl! She told the perplexed Man of Steel how a group of wayward Kryptonians were able to temporarily survive the destruction of their home world. Kal-El soon realizes the young girl is his cousin Kara Zor-El, and he sets her up with a secret identity at the local orphanage. At the time this story came out, it was revolutionary. Most Superman tales would’ve revealed Supergirl to be a hoax, who would disappear after a twist ending was revealed. But Supergirl was here to stay, and this classic Silver Age story became the springboard for a series of successful backup tales.

FOR FANS OF: Silver Age fun and Mid-century modern science-fiction

WHAT’S NEXT: Kara’s early adventures continue in a long series of Action Comics Silver Age back-up tales, in which she gets adopted, reveals her presence to the world, joins the Legion of Super-Heroes, gets a super-cat named Streaky and a super-horse named Comet, and transitions from high school to college.

BONUS: The premise of this story was used for the Superman: The Animated Series two-part episode “Little Girl Lost.”

“The Untold Story of Argo City” 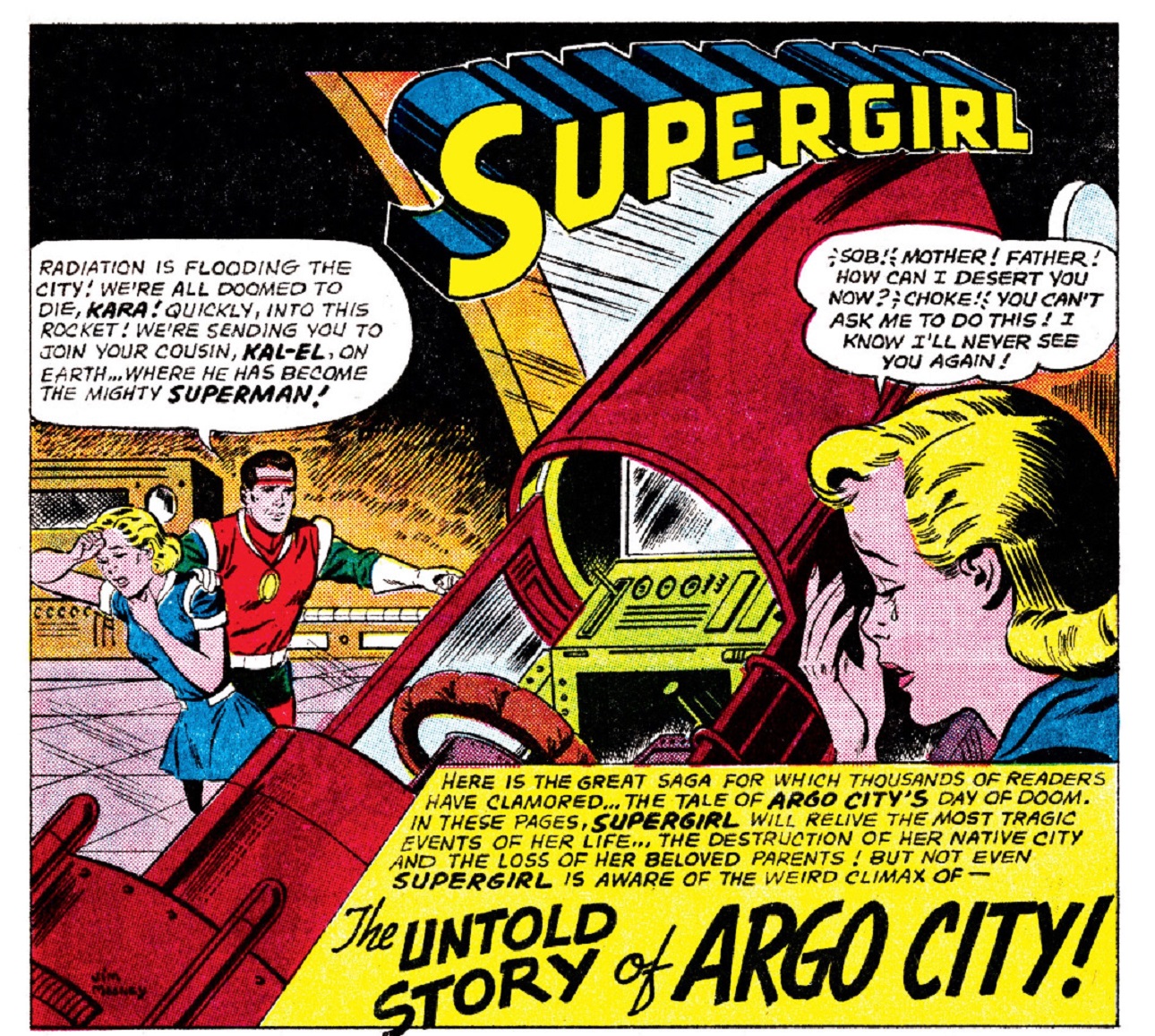 THE STORY: Kara thought that her parents had perished when Argo City was destroyed, but one night she starts having mysterious dreams about them, in which they call to her for help. Supergirl does some digging and learns her parents are indeed alive in a dimension called the Survival Zone. With the help of her foster parents, the Danvers, Kara is able to rescue her biological folks. This leads to a dilemma, as Supergirl now has two sets of parents -- and isn’t sure where she belongs. The Maid of Might’s dreams come true in a story that fuses tragedy and triumph with family.

FOR FANS OF: Fans of the 1984 Supergirl film will love learning about the mythology of Argo City, and fans of TV's Krypton will enjoy seeing more of the planet’s culture.

WHAT’S NEXT: This story gets a sequel in Action Comics #314, when Supergirl’s foster parents visit Kandor and gain superpowers of their own.

“Echoes of Times Gone By” 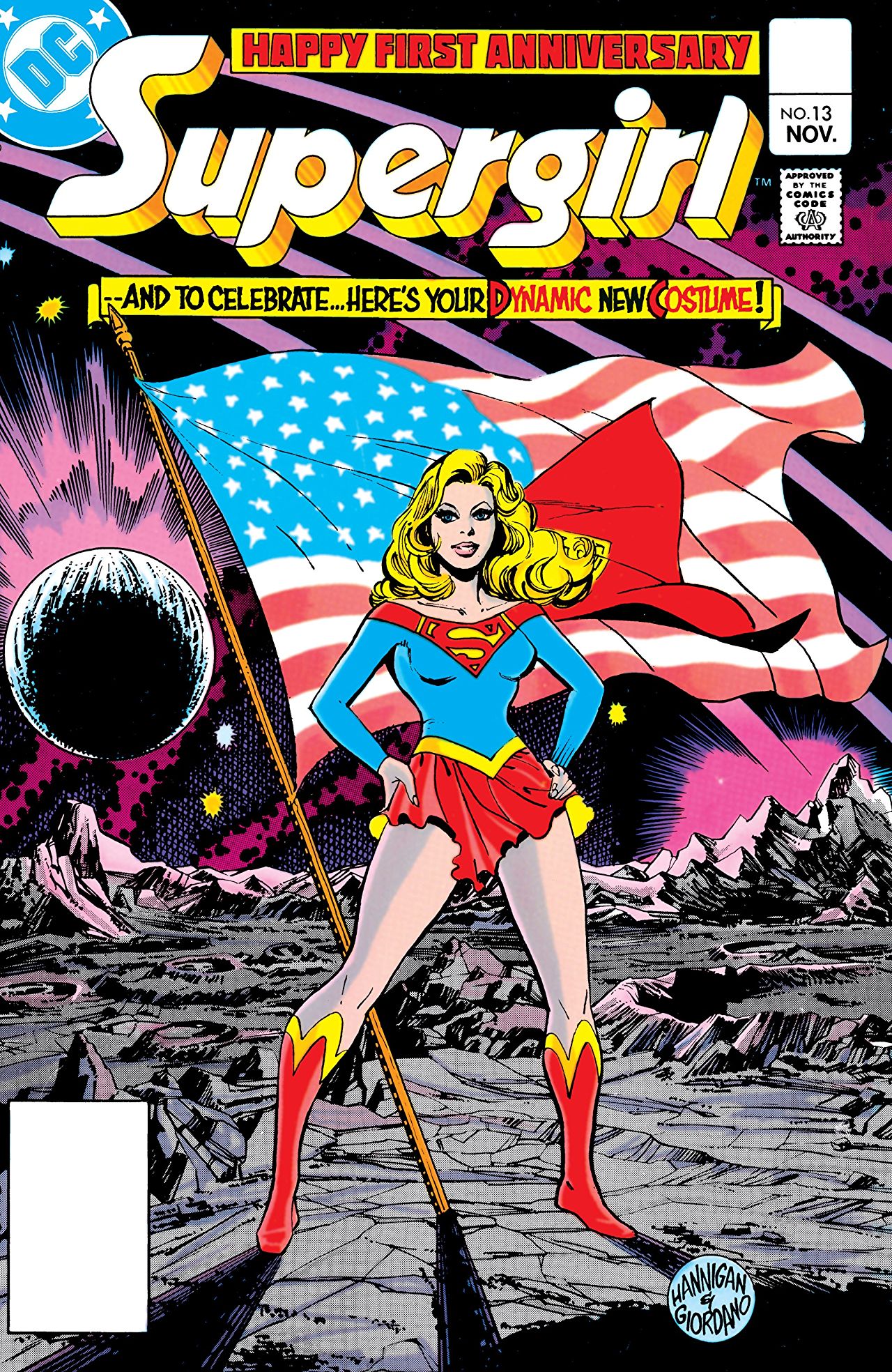 THE STORY: By the 1980s, the sweet, innocent teenager whom Superman once found years had long since grown to adulthood. Supergirl enters a new era with this issue, as Kara dons a new costume and takes on a group of Neo-Nazi’s. Writer Paul Kupperberg brought a sense of realism and relevancy to Supergirl’s adventures, as Kara struggles to fight an enemy whose hatred even she doesn’t know how to extinguish.

FOR FANS OF: 1980s fashion! Those who love 1984 Supergirl film will also enjoy seeing Kara’s comic adventures from the time of the film’s production.

WHAT’S NEXT: Sadly, not long after this story, the original Kara Zor-El fought her final battle in Crisis on Infinite Earths #7.

WHERE TO FIND IT: The Daring New Adventures of Supergirl #13

BONUS: For more of the lighthearted early Supergirl, watch her team-ups with Batgirl and Wonder Girl in a series of fun DC Nation Shorts -- Super Best Friends Forever. 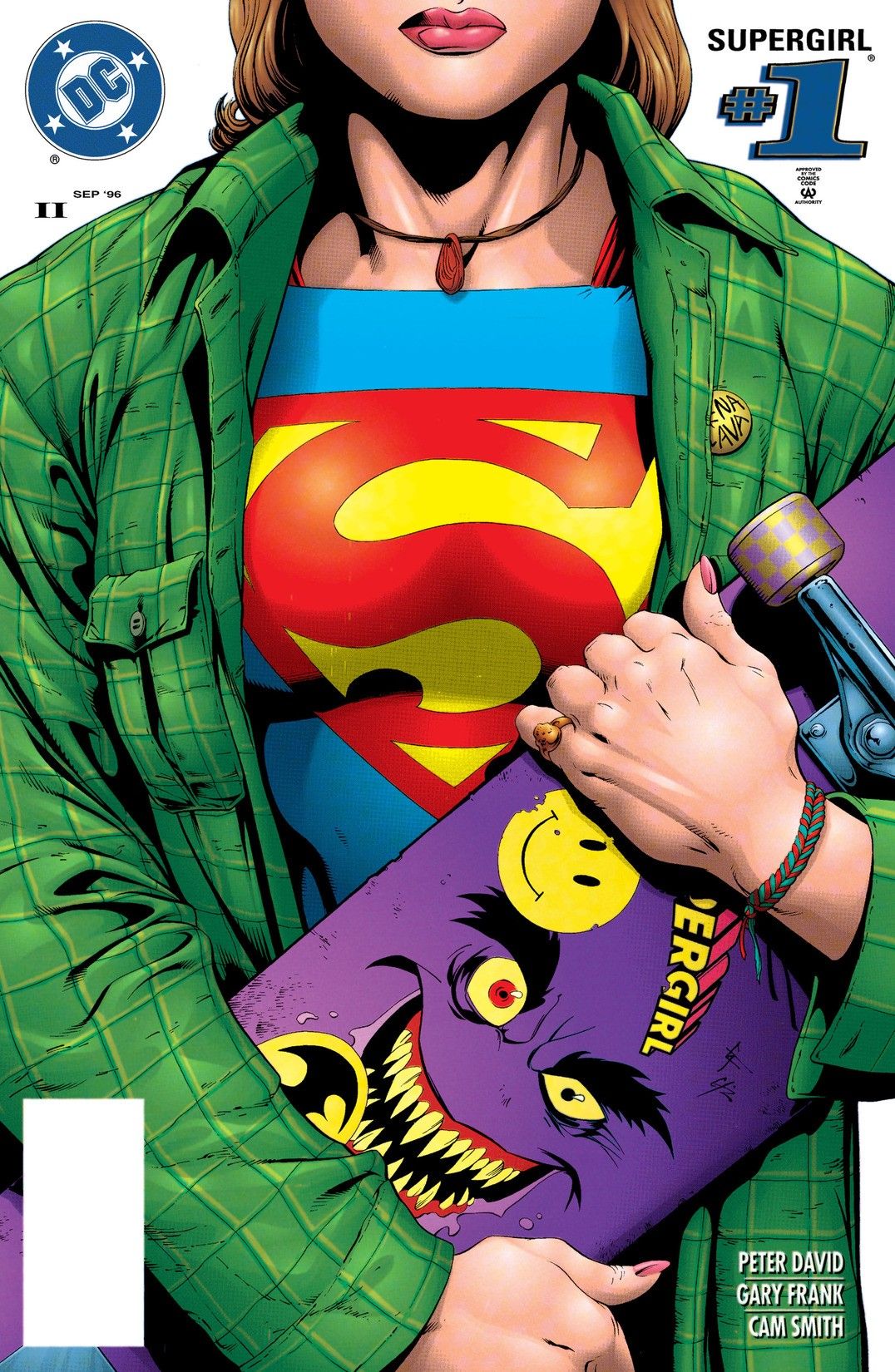 THE STORY: By the 1990s, Superman was again the sole survivor of Krypton's destruction, though an artificial lifeform known as Matrix had begun operating as Supergirl. She struggled, however, to find her own identity. That changed after she rescued a girl named Linda Danvers, who was about to be sacrificed by her boyfriend’s satanic cult. During the rescue, Matrix and Linda’s bodies merged, and became a new Girl of Steel. But where does Linda end and Supergirl begin? What kind of life has Matrix entered? Acclaimed writer Peter David takes Supergirl on a new journey, exploring themes of theology, identity and heroism.

WHAT’S NEXT: This entire Supergirl series continues Linda’s story in a very binge-worthy saga, as the truth about her destiny slowly unfolds. 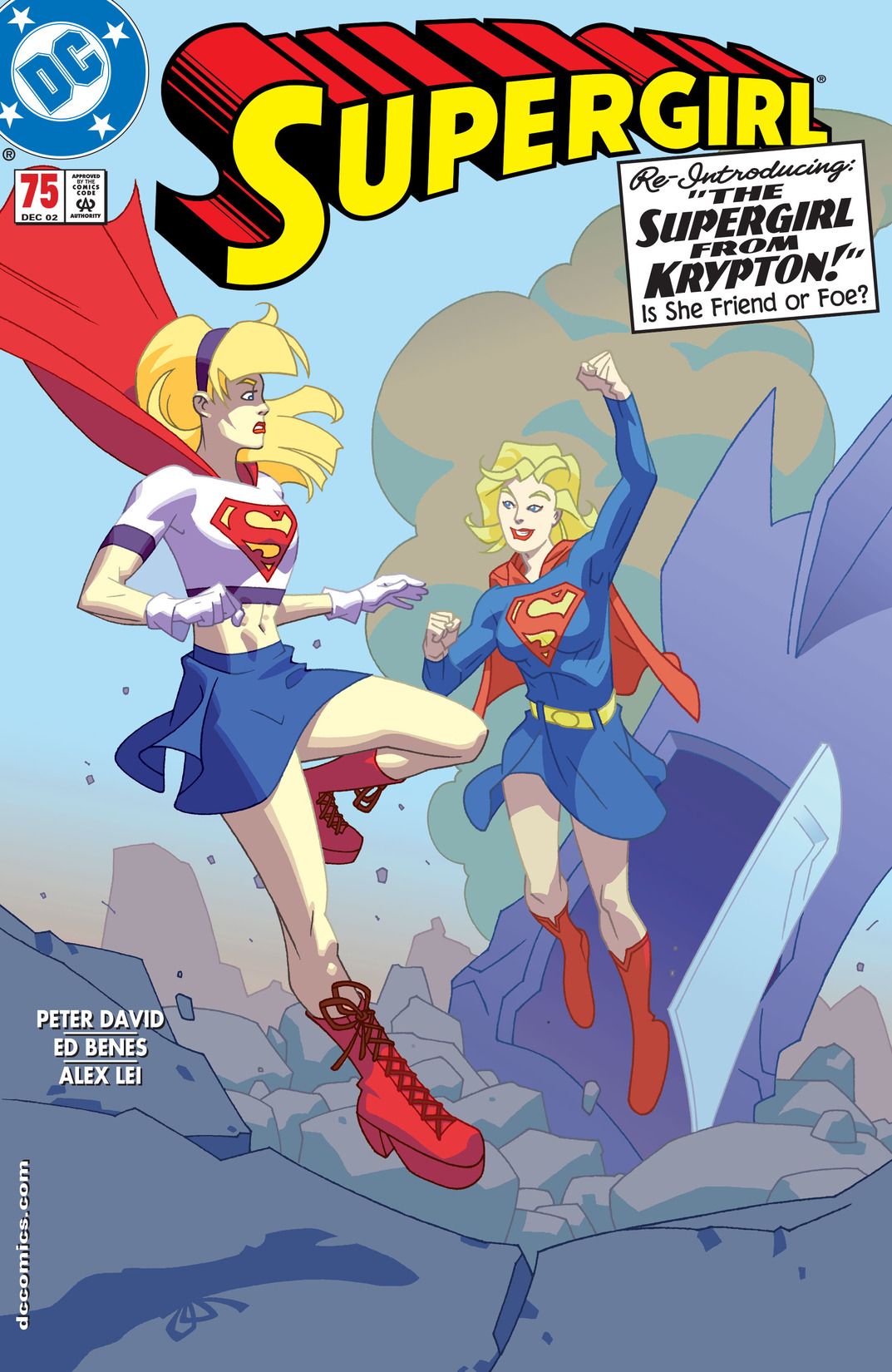 THE STORY: Linda Danvers is shocked when a rocket lands in Leesburg, carrying Kara Zor-El – exactly as she first appeared in 1959! There’s something screwy with the timeline, and now Linda has to help Kara adjust to a modern world she isn’t ready for. Can a girl with 1950s sensibilities adapt to the 21st century, and how will she react once she learns her inevitable fate? Peter David brings his Supergirl saga to a tragic close as Linda learns what it truly means to be a hero.

WHAT’S NEXT: Linda’s skateboarding daughter is featured in Supergirl #1000000, which ties into DC’s One Million event.

“Superman/Batman: The Supergirl From Krypton” 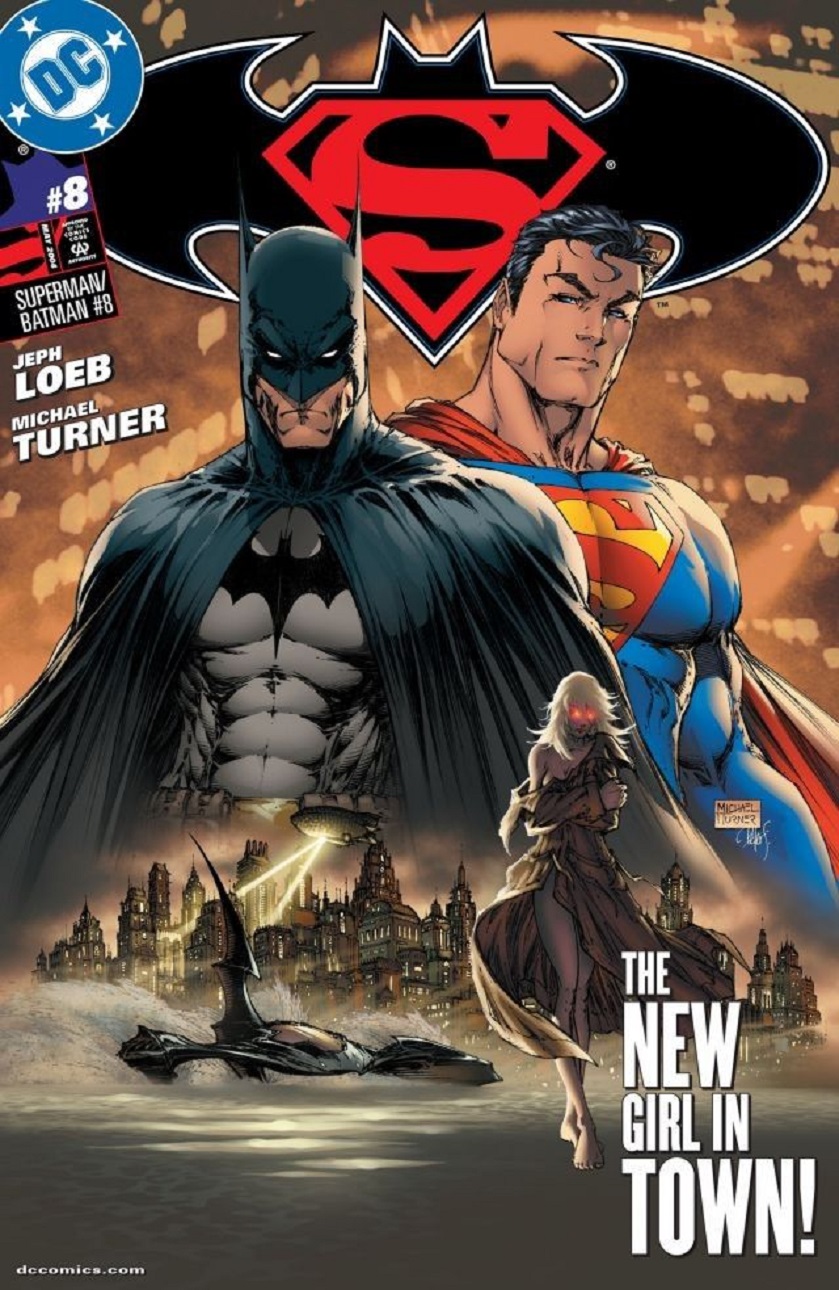 THE STORY: Superman is elated when a mysterious stranger claiming to be his cousin Kara arrives from Krypton. But Batman isn’t convinced. The youngster soon adopts the identity of Supergirl, but Darkseid seeks to exploit her. With Wonder Woman, Batman, and Darkseid all wanting something from her, can Kara ever find her own way? Writer Jeph Loeb and artist Michael Turner update the original Supergirl story, adding a bit of intrigue and attitude for the 21st century. The emotional stakes are high as Superman’s hopeful optimism is contrasted with Batman’s skepticism. Is this Kara too good to be true?

WHAT’S NEXT: Kara learns how to be hero and adjusts to life on Earth in the 2005 Supergirl series.

BONUS: This story was adapted in the 2010 animated film Superman/Batman: Apocalypse .

“Why the World Doesn’t Need a Supergirl” 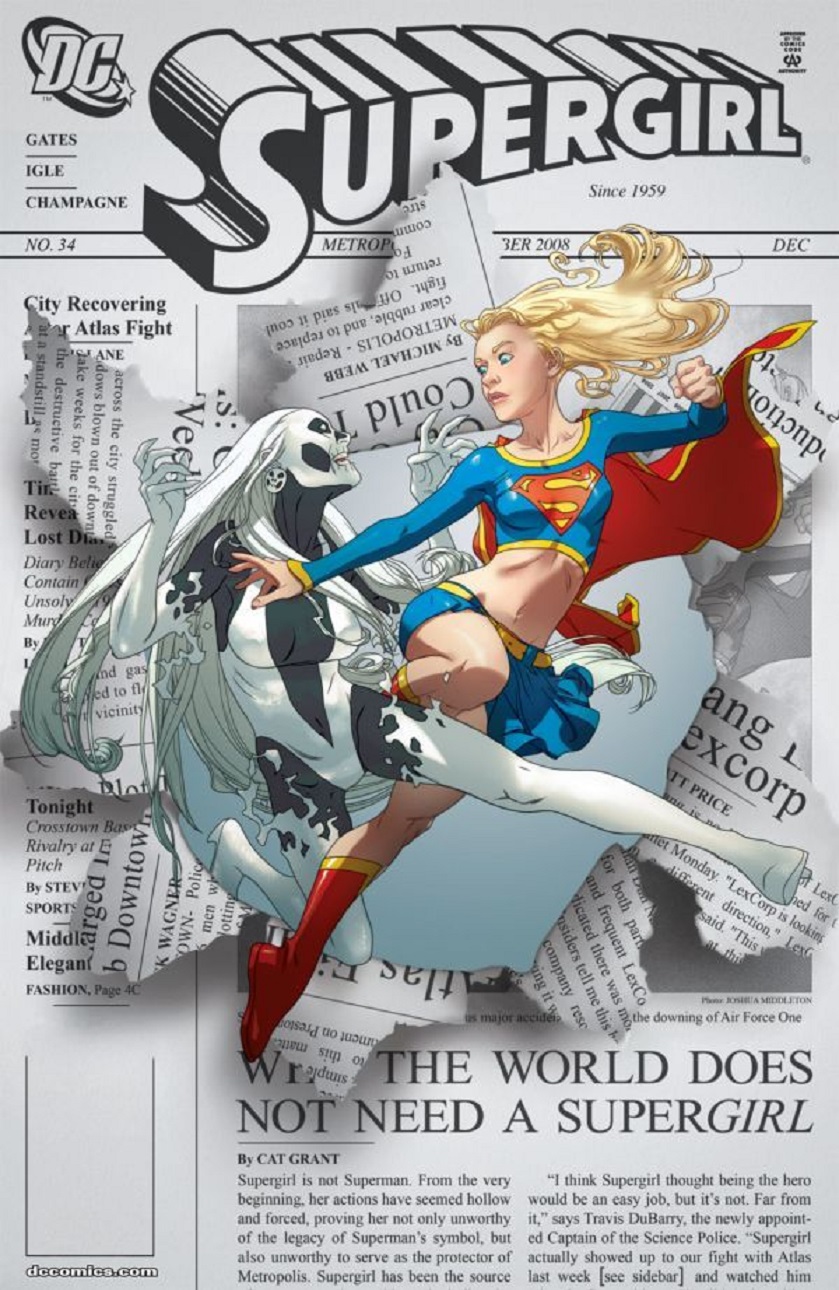 THE STORY: Cat Grant writes a scathing anti-Supergirl editorial, causing the people of Metropolis to turn on Kara. Feeling unworthy of the S symbol, Supergirl seeks advice from various people about how she can live up to her cousin’s legacy of heroism. With the help of Clark Kent's od friend Lana Lang, Kara decides to get a better understanding of humanity by adopting a secret identity as Linda Lang. Writer Sterling Gates begins his celebrated run here as he reexamines Kara’s life and takes her heroic journey in a new direction. Gates was able to smooth out some of this Kara’s angrier, rougher edges by giving her the sense of humanity readers didn’t realize was missing.

FOR FANS OF: This story will be loved by journalism fans, readers who enjoy tales of hope, and fans of family drama.

BONUS: A contemporaneous Supergirl fights alongside the Legion of Super-Heroes in the Justice League Unlimited episode “Far From Home.”

“Reign of the Cyborg Superman” 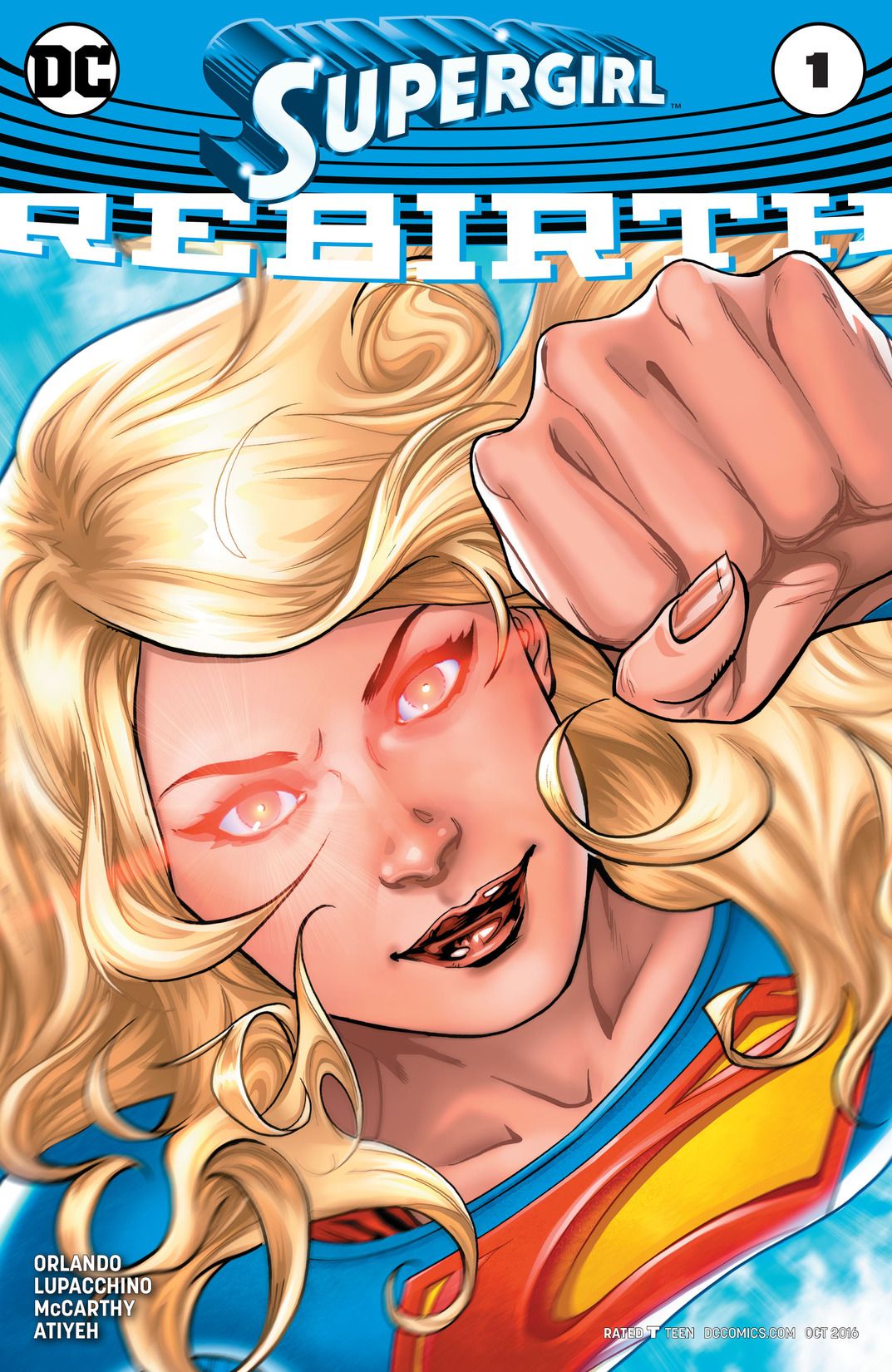 THE STORY: A new "Rebirth Era" Supergirl begins a life in National City, where she's placed with foster parents, enrolls in high school, and starts a job at the DEO. Her busy life is further complicated when she’s offered a job working for media mogul Cat Grant. But everything changes when she’s confronted by the Cyborg Superman, who claims to be her late father Zor-El. Is this the family reunion Kara has dreamed of, or is there something sinister in the works? Writer Steve Orlando builds a new world for Supergirl.

FOR FANS OF: Those who adore the current Supergirl TV series will recognize many of the show's elements in this comic.

WHAT’S NEXT: Check out The Adventures of Supergirl for tales of Kara set in the continuity of the TV show.

What's your favorite Supergirl comic? Let us know in our Community!