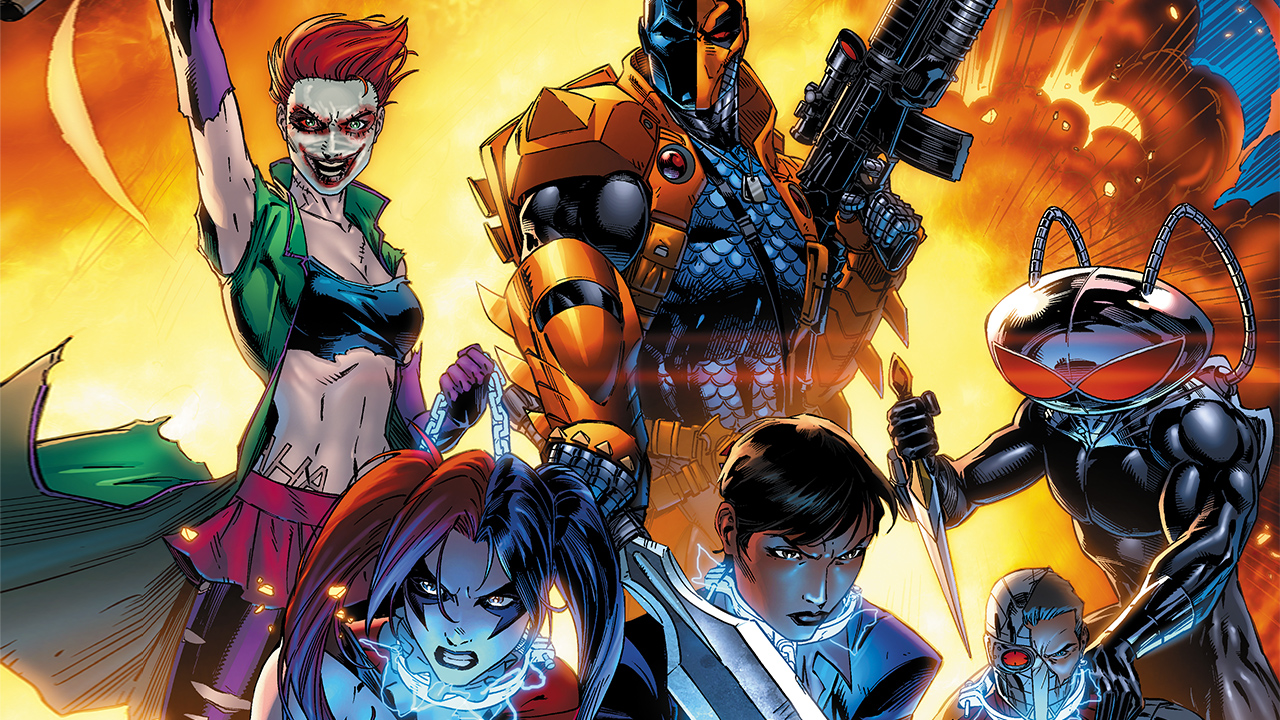 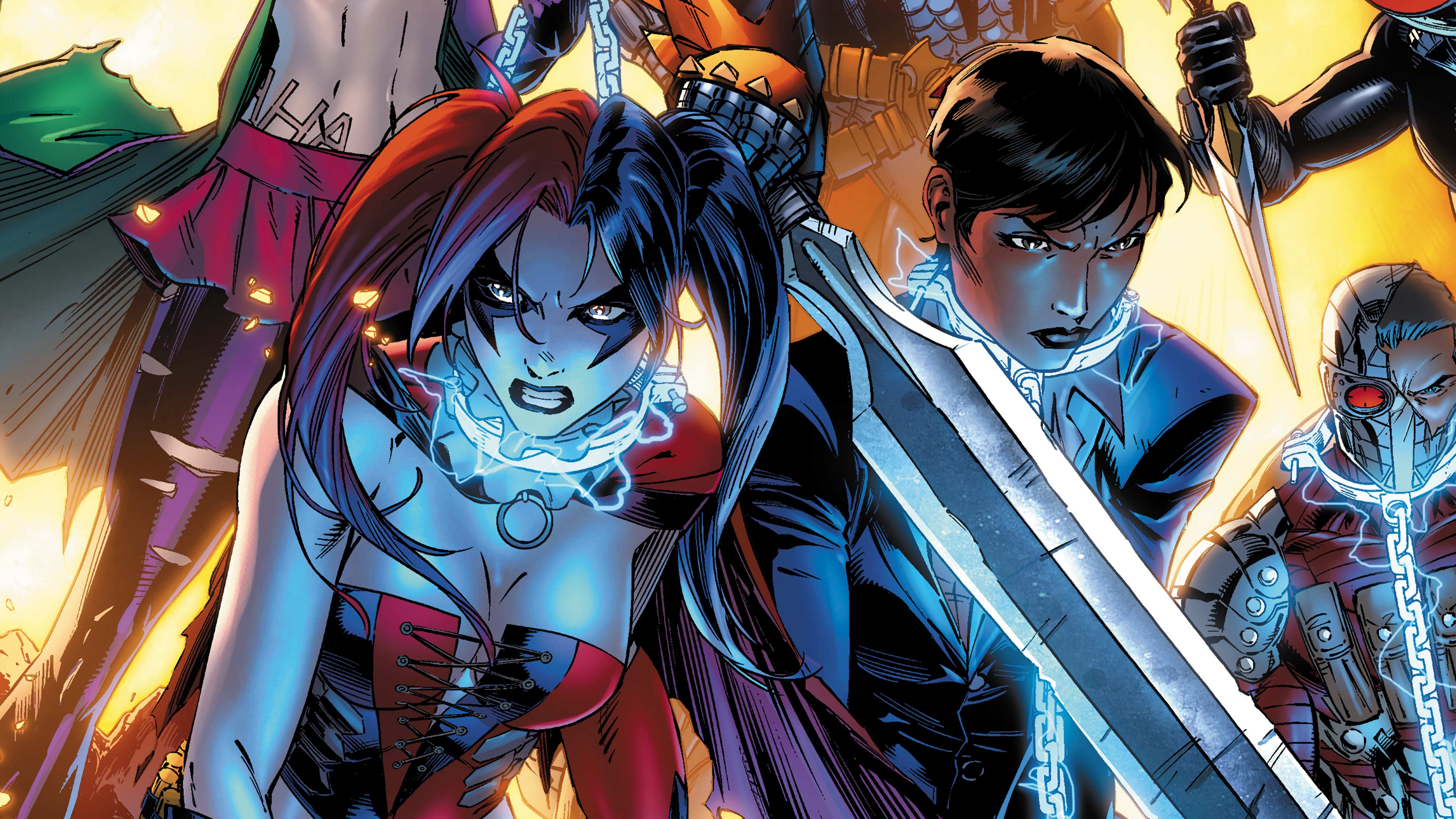 DC Comics has some of the noblest heroes in all of comicdom, but sometimes it’s more fun to be bad! The Suicide Squad fuses villainy with espionage in one of the most unusual teams in the DC Universe. If you’ve never read a Suicide Squad comic before, don’t fret – our handy guide will give you all the intel you need on Task Force X. Wanna start your reading mission in the present day with Harley Quinn?Maybe in the 1980s with founder Amanda Waller’s first team of antiheroes? Or do you want to go as far back as the team's original 1950s incarnation? No matter where you choose to start your binge-reading, our Suicide Squad dossier has the right comic for you... 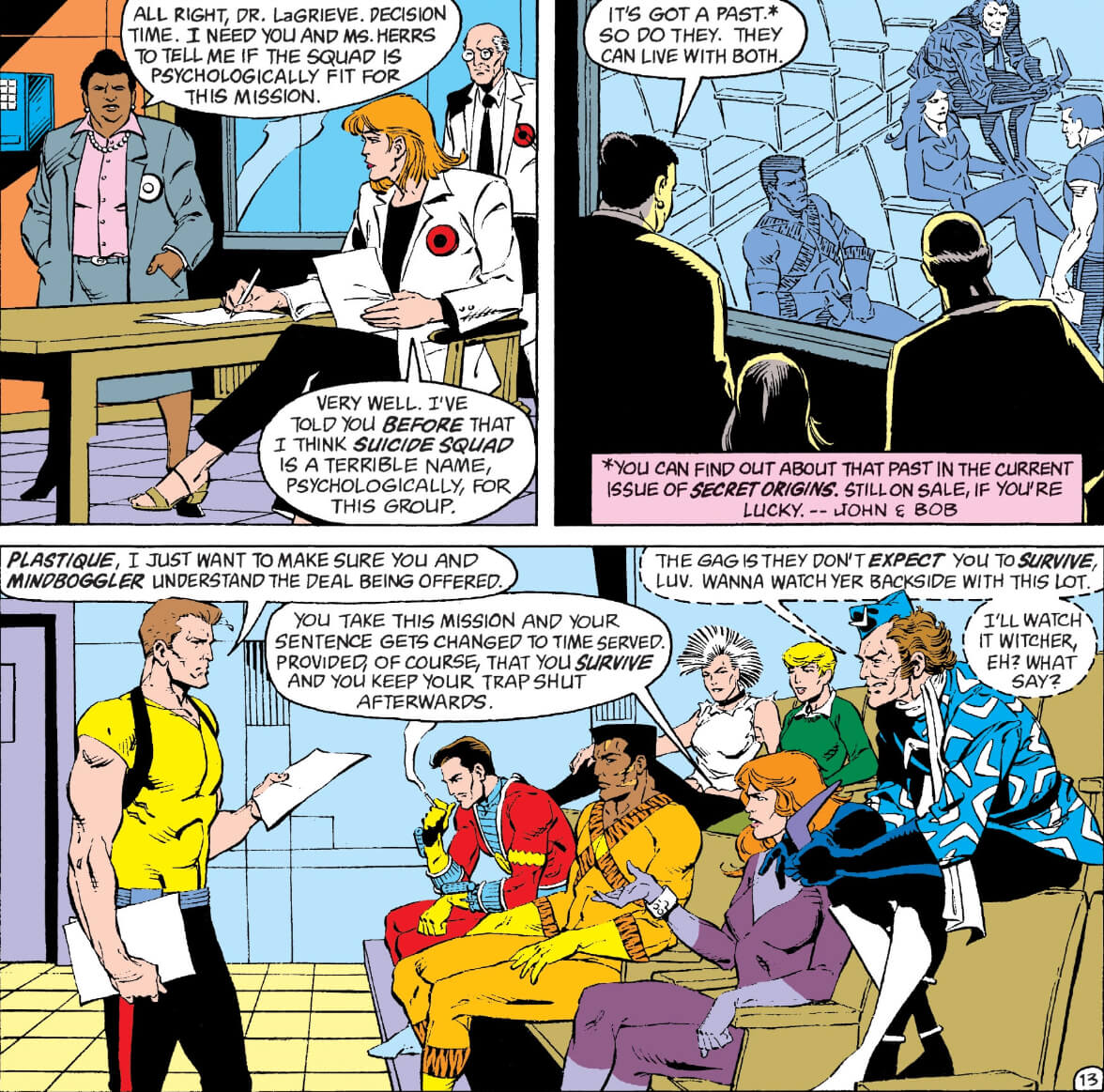 THE STORY: In the wake of DC's 1986 event series ‘Legends,’ Amanda Waller has resurrected the long-dormant Task Force X program, and is now using incarcerated villains as operatives in carring our government missions. The series kicks off with the Suicide Squad being sent to Qurac to quash a terrorist group. Unlike most commanders, Amanda Waller doesn’t care if they all make it back or not as long as they succeed. Although Rick Flag and Karin Grace are involved, it’s clear this is a far cry from the Silver Age Task Force X -- a team of heroic G-men (see their entry at the bottom of this list) -- as writer John Ostrander redefines the Suicide Squad with new concepts and story elements that still define them today.

WHAT’S NEXT: If you enjoyed this incarnation of the Suicide Squad, then check out the limited series ‘Legends’ to see how Amanda Waller brought them together. 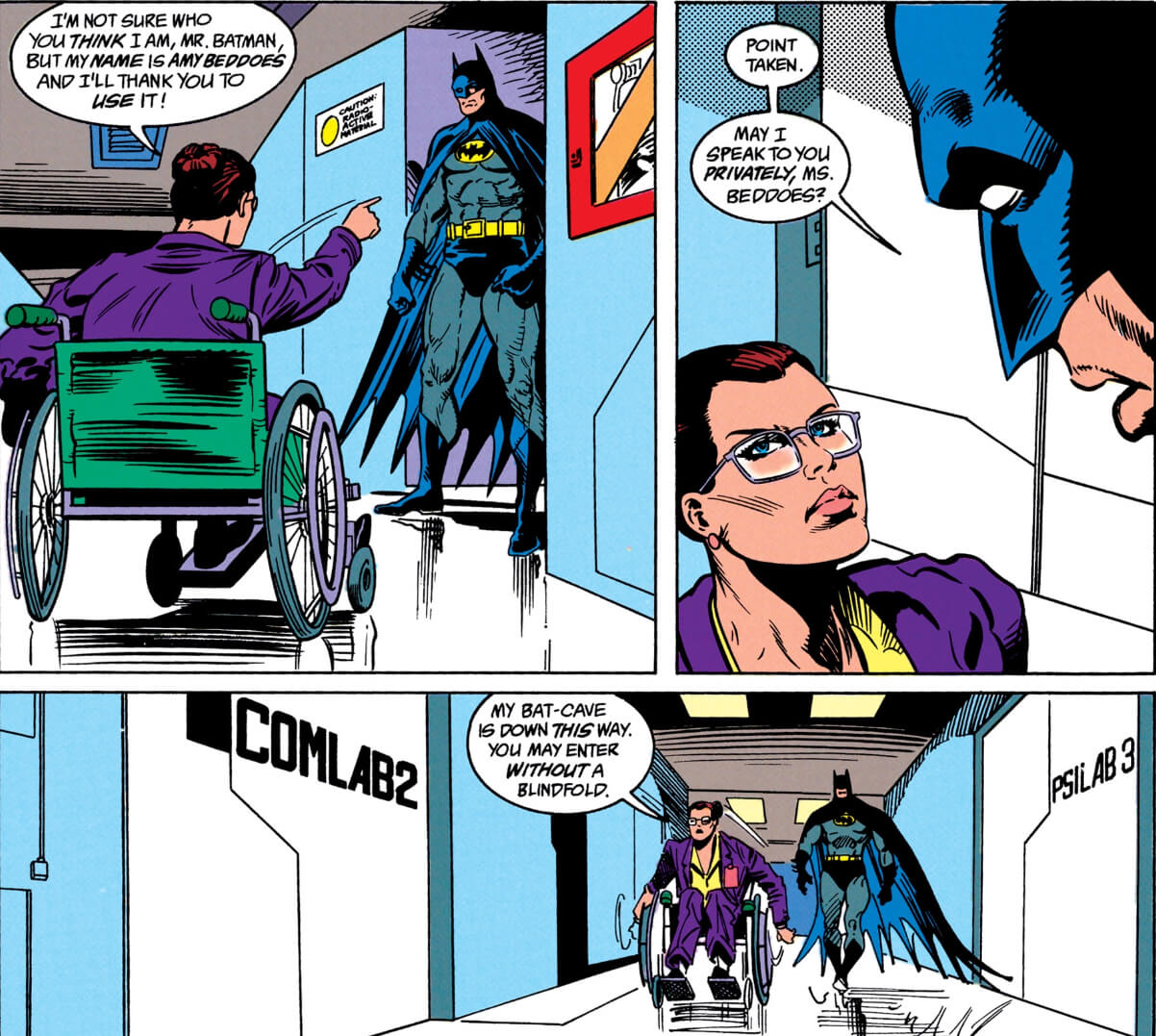 THE STORY: The Atom is presumed dead, causing the Justice League to investigate the Suicide Squad’s possible involvement. If anyone can stand up to Superman, Batman, and Aquaman, it’s Amanda Waller. But can she hide the truth? What is the truth behind Atom’s death – if he’s REALLY dead? Can Task Force X prevent an international incident after President Marlo is replaced with an imposter? All this, plus Batman reunites with Barbara Gordon for the first time since she became Oracle. John Ostrander and his wife Kim Yale juggle multiple plot threads, while still managing to produce an engaging story that keeps readers guessing until the final panels.

FOR FANS OF: Barbara Gordon, mysteries, government deception, and the Justice League.

BONUS: Batman discovers Barbara Gordon is operating as the information broker Oracle in this storyline. To see more of Barbara as Oracle, check out the live-action cult classic TV series ‘Birds of Prey.’ 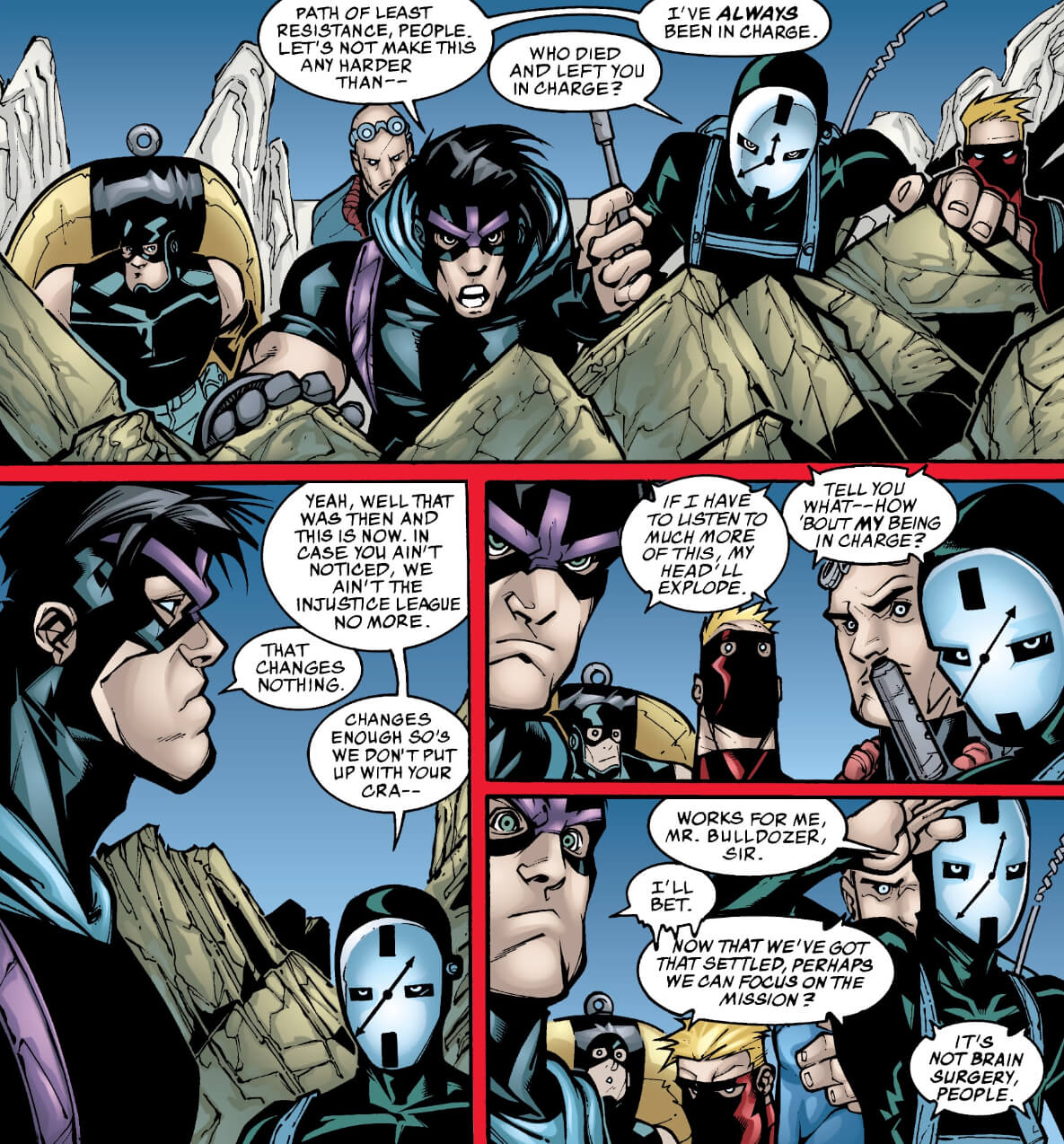 THE STORY: Lex Luthor is now President of the United States, and he’s authorized Secretary of Metahuman Affairs Amanda Waller to revive the Suicide Squad program, with a new group called Task Force Omega. The Squad’s new field leader is Sgt. Rock, and the series gradually explores the mystery of how the World War I veteran is still alive in the modern age. The Suicide Squad continues to live up to its name, as the first issue proves that not everyone makes it back alive. Writer Keith Giffen, known for his humorous tone in his 1980s ‘Justice League’ run, applies a similar sensibility here while adding some more modern and dark touches, creating an underrated ‘Suicide Squad’ run. 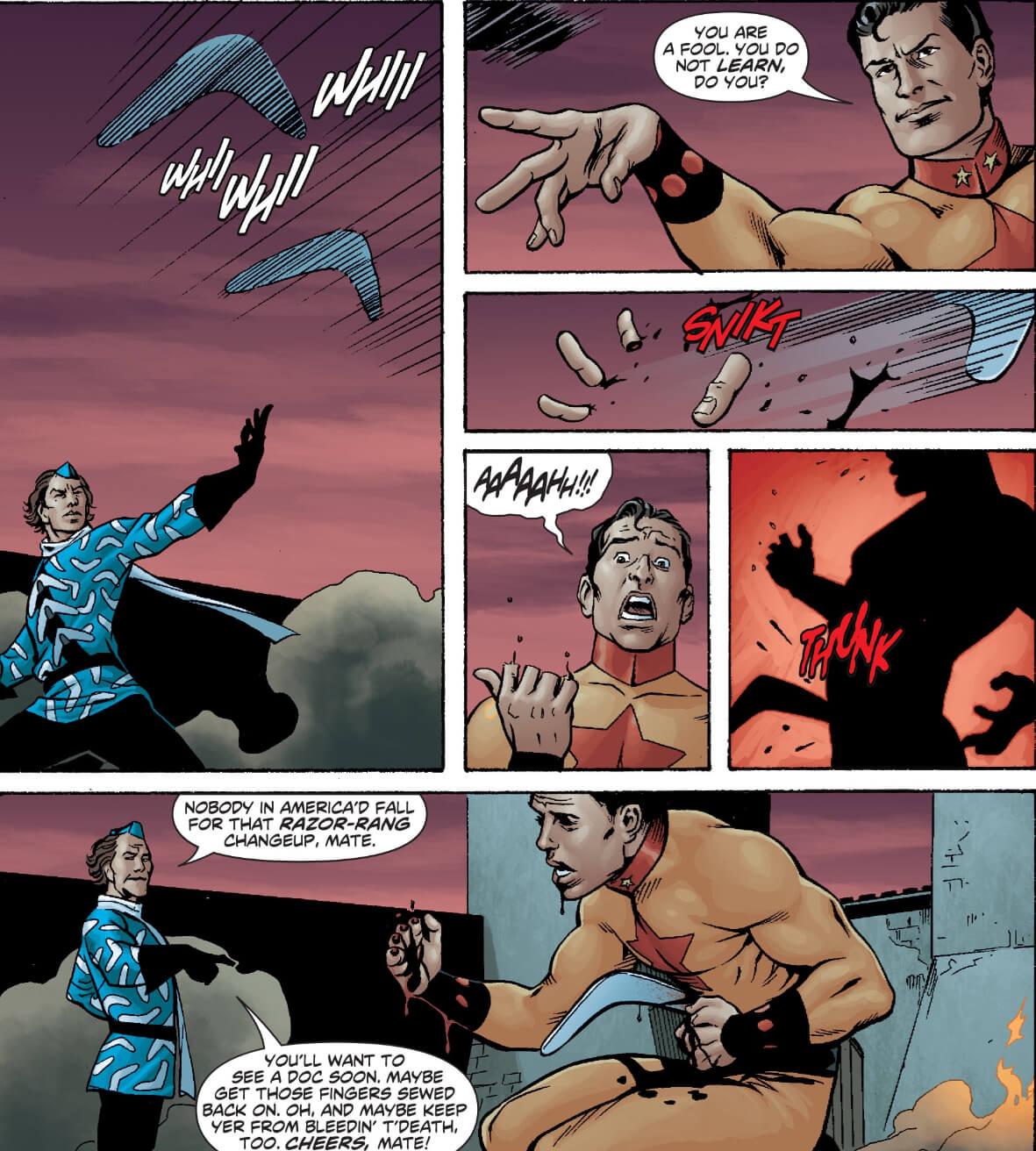 THE STORY: Rick Flag fights his way through an island of dinosaurs, and survives a torturous imprisonment in Qurac before rejoining a new version of Task Force X. This limited series pushes Flag to the limit, as he learns there’s more to his survival than meets the eye, while the rest of the Squad barely make it out of a series of dangerous missions alive. Writer John Ostrander returns to the team he made famous, and proves that he hasn’t lost his talent for writing page-turning thrillers.

FOR FANS OF: Dinosaurs, survival stories, assassination missions, and tales of identity crisis.

“Kicked in the Teeth” 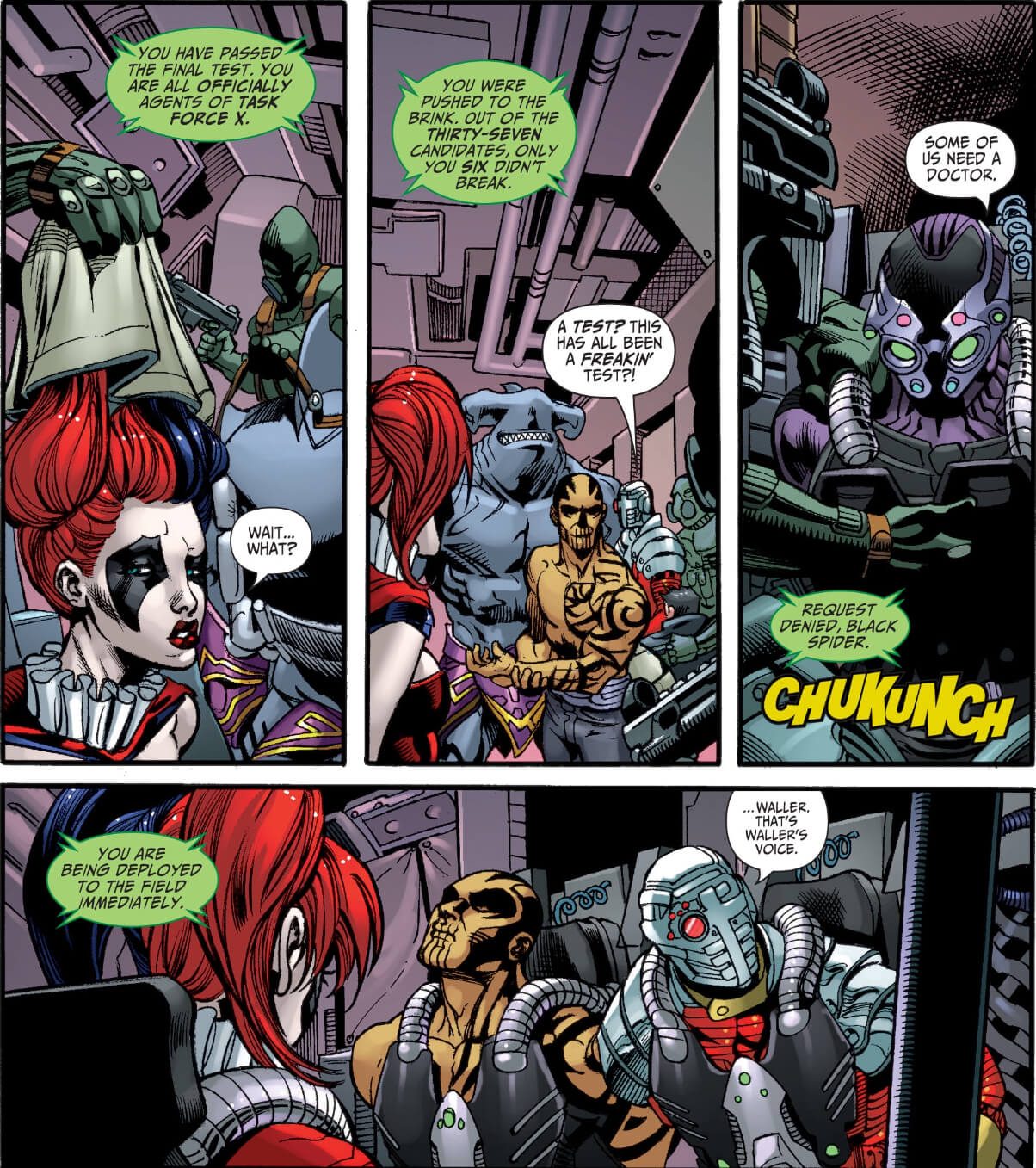 THE STORY: After an unconventional audition process, Amanda Waller recruits a new roster of villains for Task Force X, and immediately sends them into the field for a series of high-risk assignments. This incarnation of the team added Harley Quinn, changing the dynamics of the group forever. Many of the elements from this run, including the edition of El Diablo, helped inspire the 2016 ‘Suicide Squad’ film. More crass, more dangerous, and more insane than ever before, writer Adam Glass took covert ops to a new level as he brought Task Force X into DC’s New 52 era.

WHAT’S NEXT: Check out ‘Suicide Squad’ #24-30 to see how the Squad deals with the events of ‘Forever Evil,’ and meet…Task Force Y?!

BONUS: A version of Task Force X inspired by this lineup stars in the 2014 animated movie ‘Batman: Assault on Arkham.’ 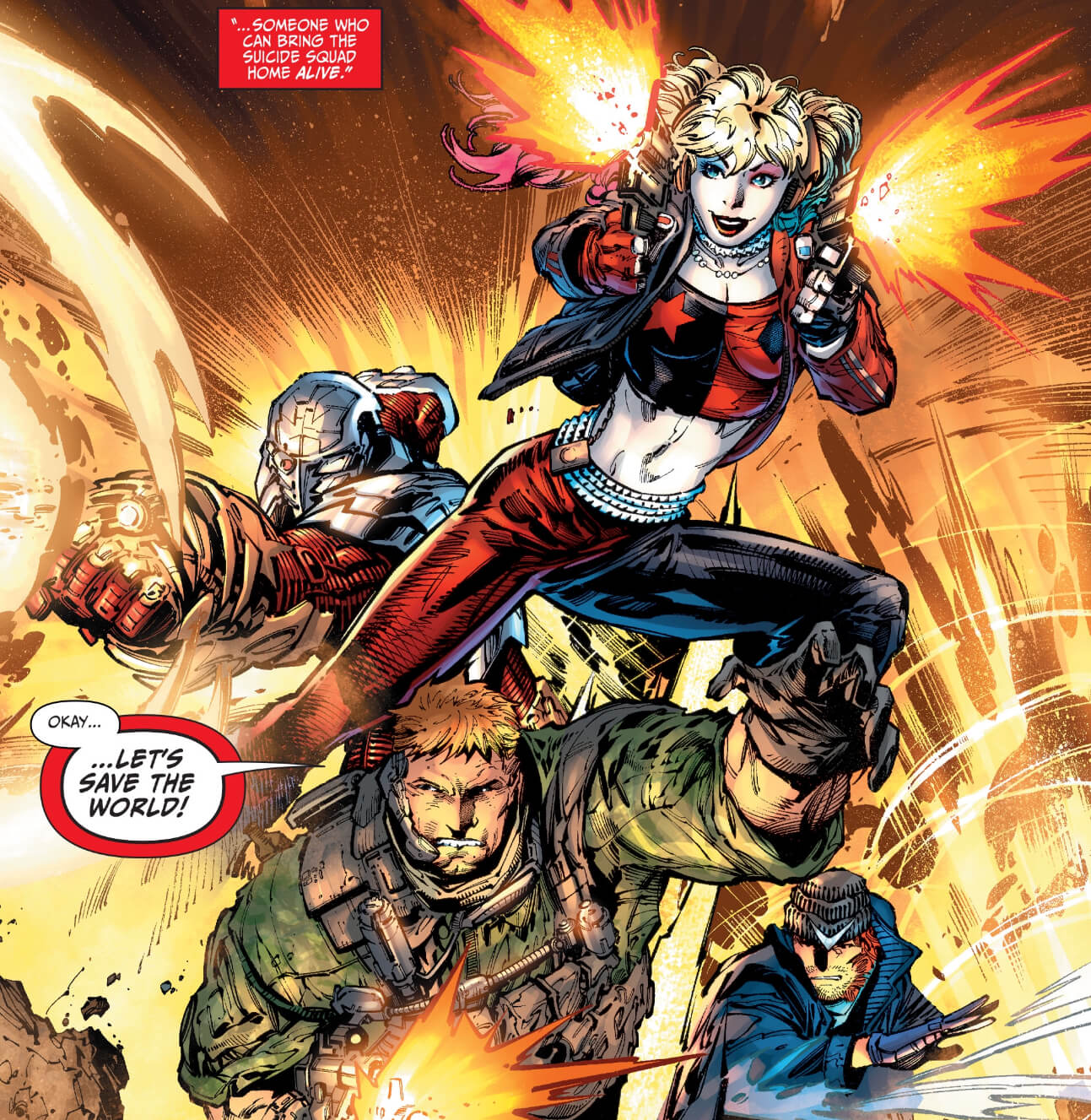 THE STORY: Amanda Waller is out, and Vic Sage is now in charge of the Task Force X program. Sage’s first order of business is to add a few dangerous rogues like Deathstroke and Black Manta to the roster. What could possibly go wrong? Did we mention that the explosive implants are gone? Sean Ryan turns the volume up to 11 for his run on ‘New Suicide Squad.’ The only rule is, there are no rules! 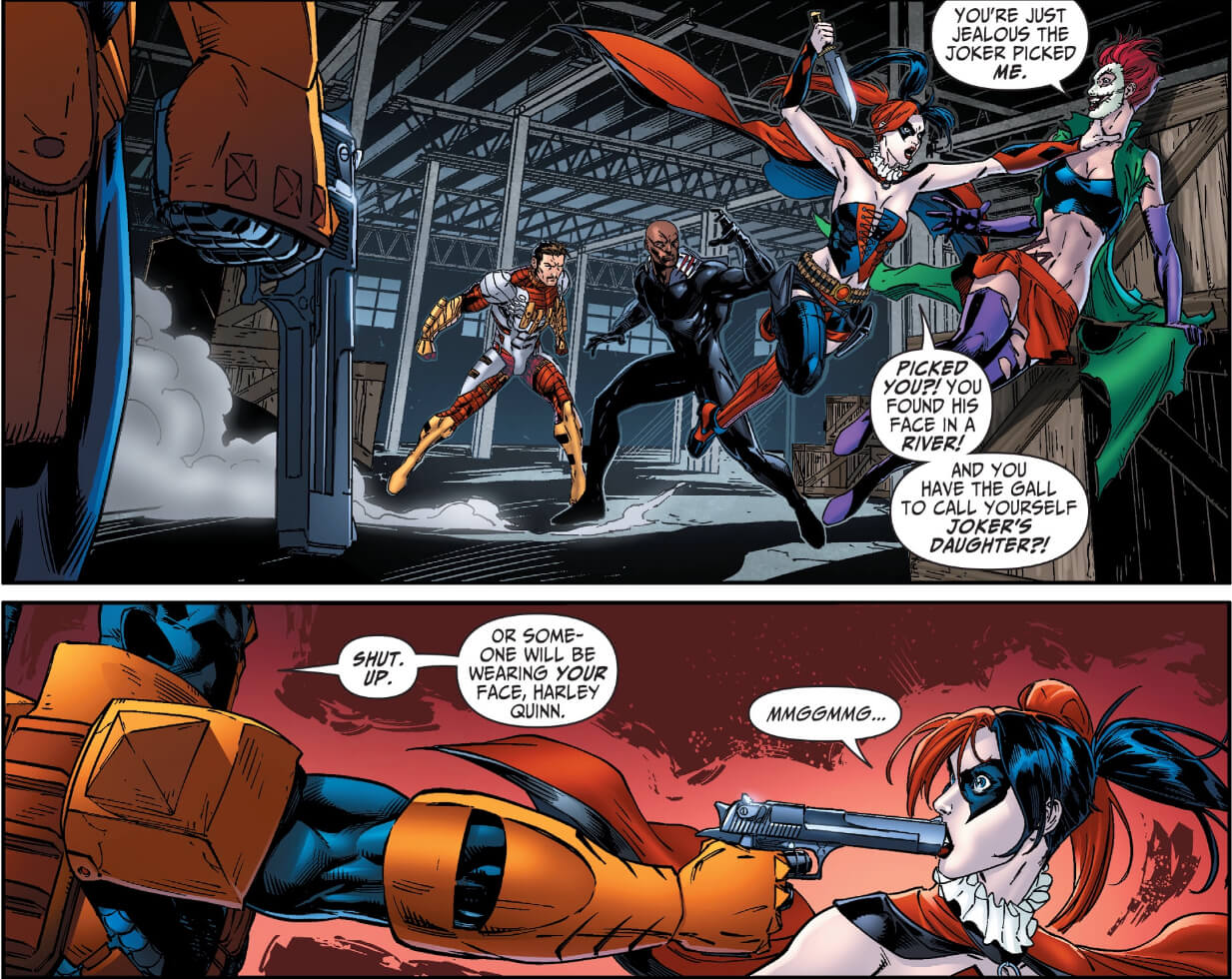 THE STORY: Amanda Waller has taken back control of Task Force X, and she’s sending her reformed team on a high-stakes heist mission. The Suicide Squad must recover a mysterious item known only as the Black Vault, and the secrets found within the item are dangerous enough to tear the entire world apart. Writer Rob Williams is joined by DC superstar penciler Jim Lee, and a host of other famed illustrators, to produce a back-to-basics story for Task Force X with an iconic roster inspired by the 2016 motion picture.

WHAT’S NEXT: Witness a free-for-all battle as the Justice League takes on Task Force X in the ‘Justice League vs. Suicide Squad’ limited series. 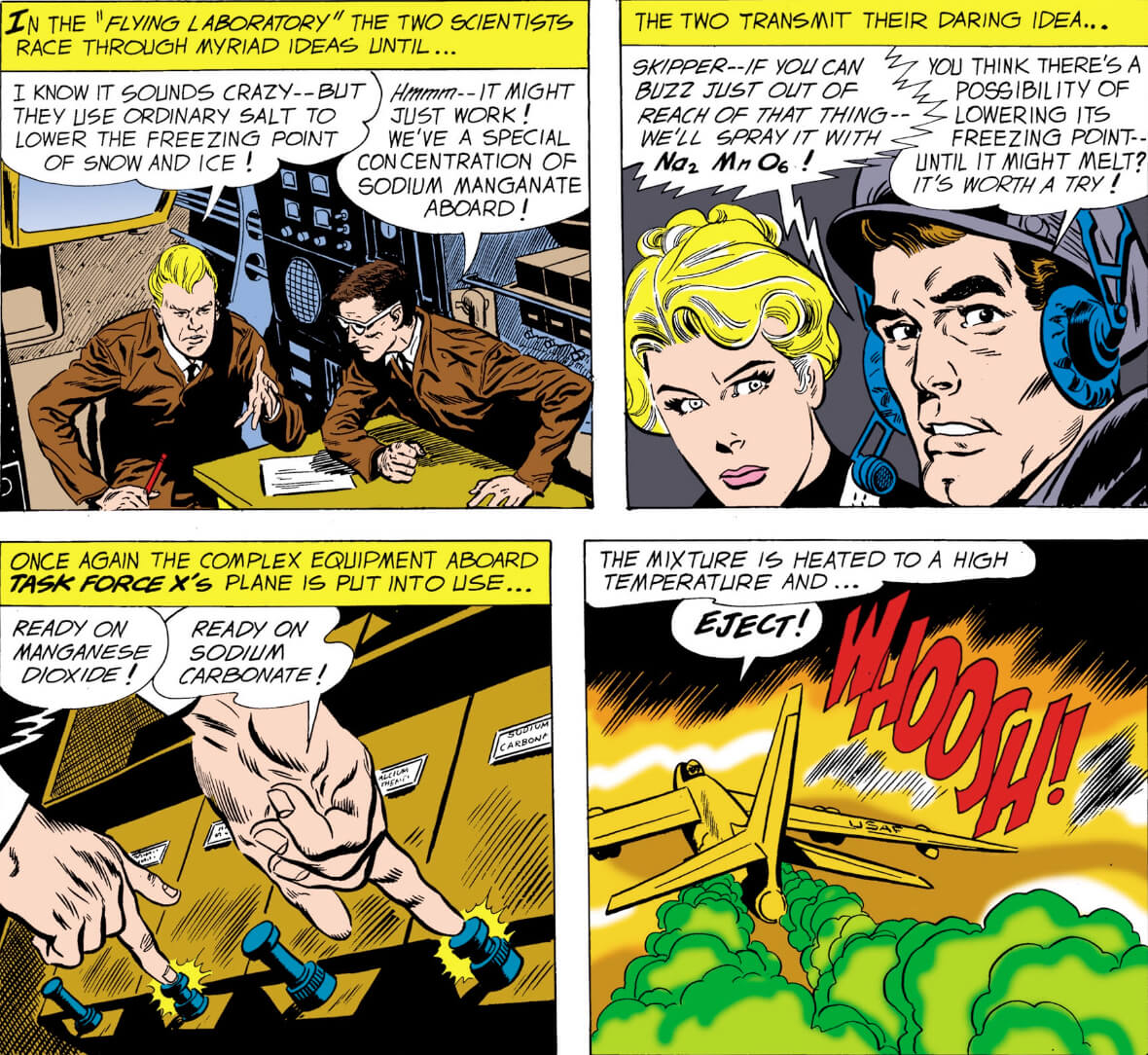 THE STORY: Before the villains joined their ranks, meet the original Task Force X. Led by Rick Flag, the first version of the Suicide Squad is a team of adventurers and scientists who are called in by the government to deal with threats too big for their normal operatives. Their first mission involves stopping a giant behemoth using their scientific ingenuity and state-of-the-art (for the 1950s) equipment. This incarnation of Task Force X includes Karin Grace as the combat medic. At the time it was considered revolutionary to have a female on the frontlines, and although she did have some scenes where she was lovesick for Rick, Karin proved herself to be a worthy edition to Task Force X. This story also features some early illustrations from Ross Andru, the famed comic book penciler who went to co-create the Metal Men and become one of the most notable artists of the 1970s' Bronze Age.

BONUS: Rick Flag and his father appear in the 2008 animated classic ‘Justice League: The New Frontier.’

What’s your favorite Task Force X lineup? Let us know in our Community!