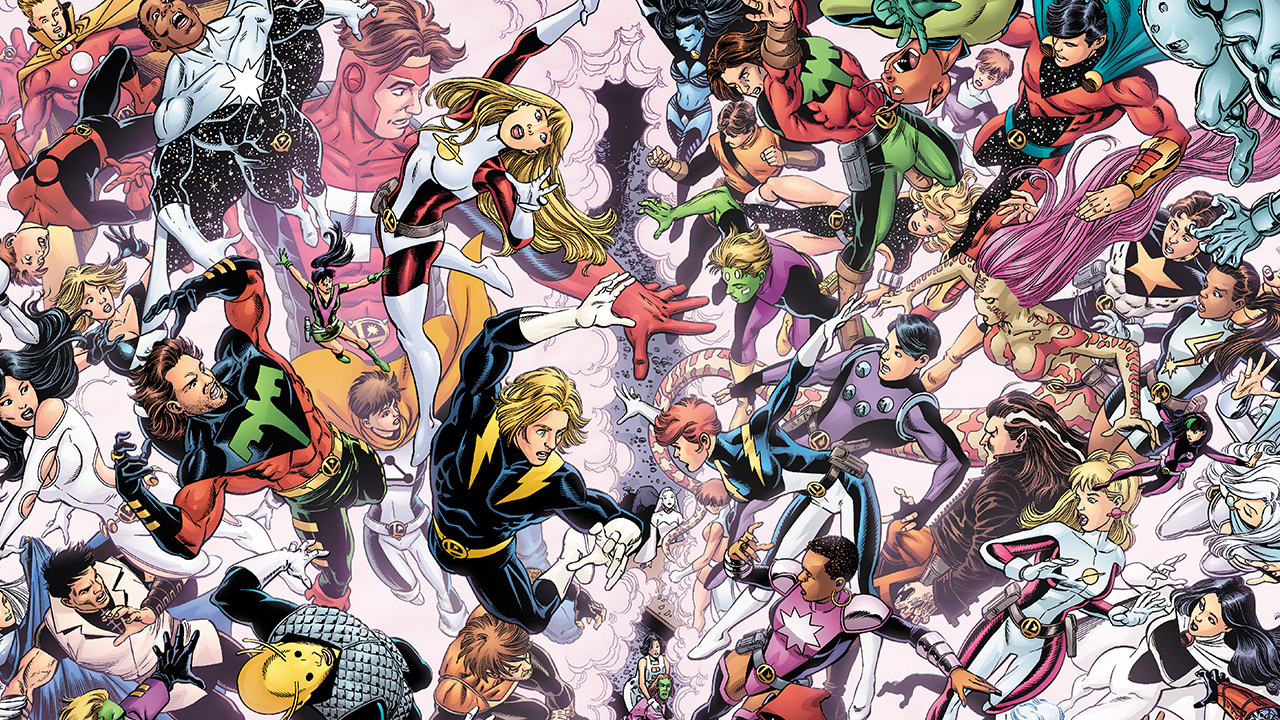 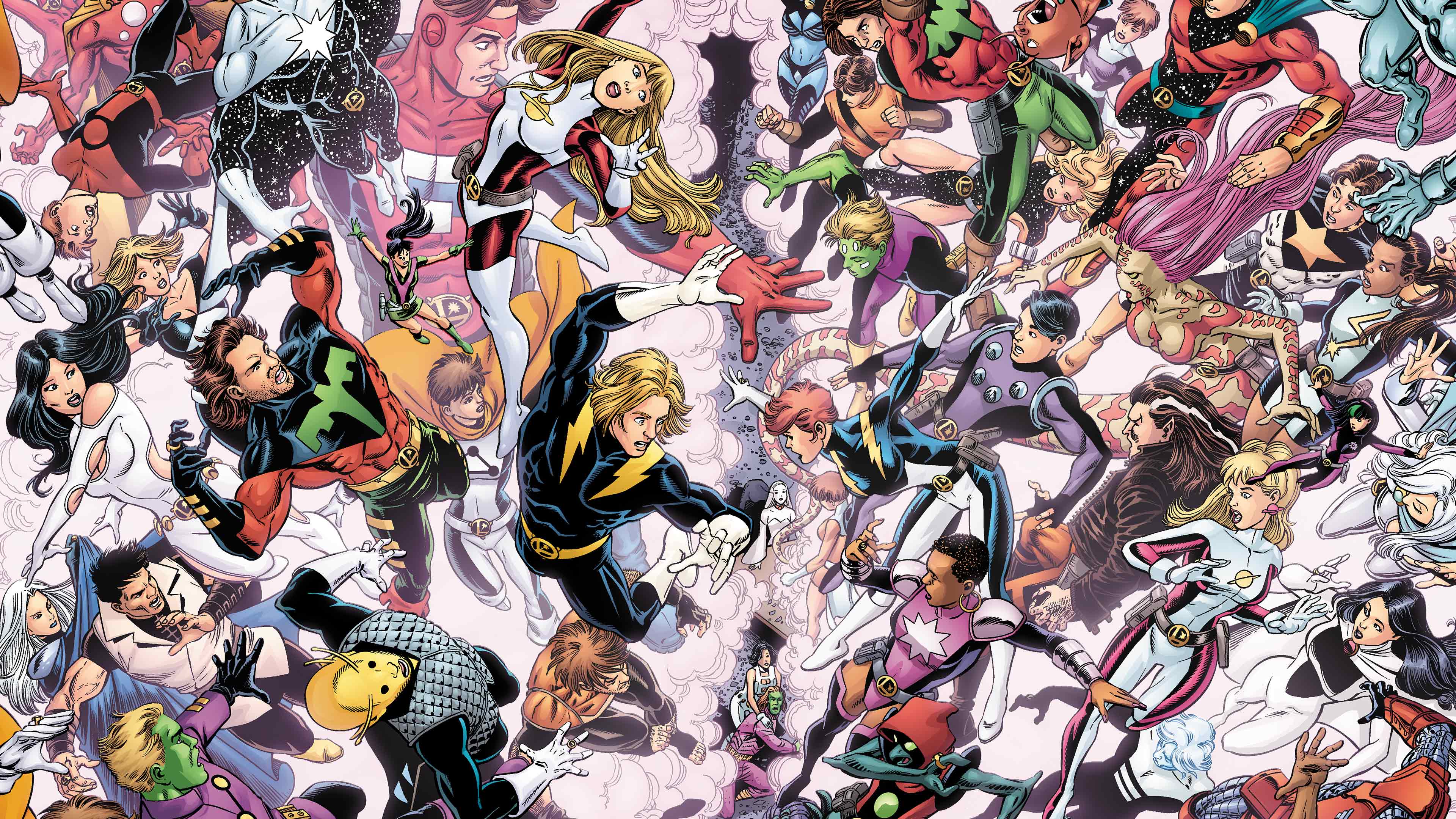 Where to Start Reading Legion of Super-Heroes Comics

Did you know that if you started reading every comic in DC Universe’s massive digital library, you wouldn’t finish until the 30th century? Okay, we haven’t actually checked the math on that, but there are plenty of cool comics about this particular century, and its resident heroes – the Legion of Super-Heroes. Operating out of their fabled clubhouse and exploring the galaxy with the help of their Legion flight rings, the mighty Legionnaires take crime-fighting to the future as they keep peace within the United Planets. With Saturn Girl, Brainiac 5, Mon-El, and dozens more – the Legion has plenty of awesome members showcased in decades of thrilling stories. Here’s our handy guide to the best places to start your Legion journey.

“The Legion of Super-Heroes” 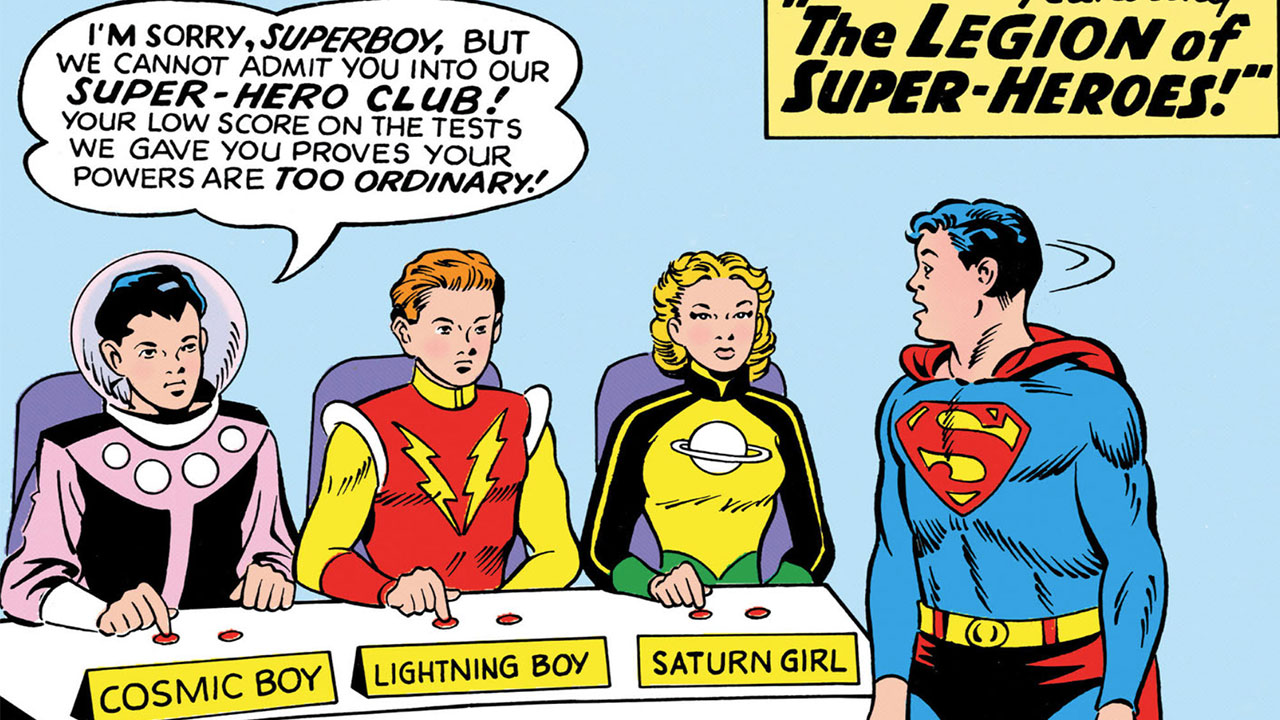 THE STORY: While patrolling Smallville, Superboy is approached by a group of time-traveling super-teens, who invite him to their home in the 30th century. Their group, introduced here as the Legion of Super-Heroes, was inspired by the legends of Superboy’s exploits, and give Clark a chance to audition for their team. Since he’s their inspiration, the audition shouldn’t be a problem, right? Wrong! Superboy underperforms at the audition, making it appear that he’s not cut out for the Legion of Super-Heroes. However, things in the Silver Age weren’t always as they appeared, and naturally there’s a twist. Writer Otto Binder introduced the world of the Legion with this fun offbeat tale. Originally, this was meant to be a one-off story, but readers reaction to the Legion was strong, leading to more return trips to the 30th century.

WHAT’S NEXT: The Legion of Super-Heroes return to 20th century Smallville in ‘Adventure Comics’ #267.

BONUS: For a different take on the Legion’s first meeting with a teenage Clark Kent, check out the ‘Superman: The Animated Series’ episode “New Kids in Town.” 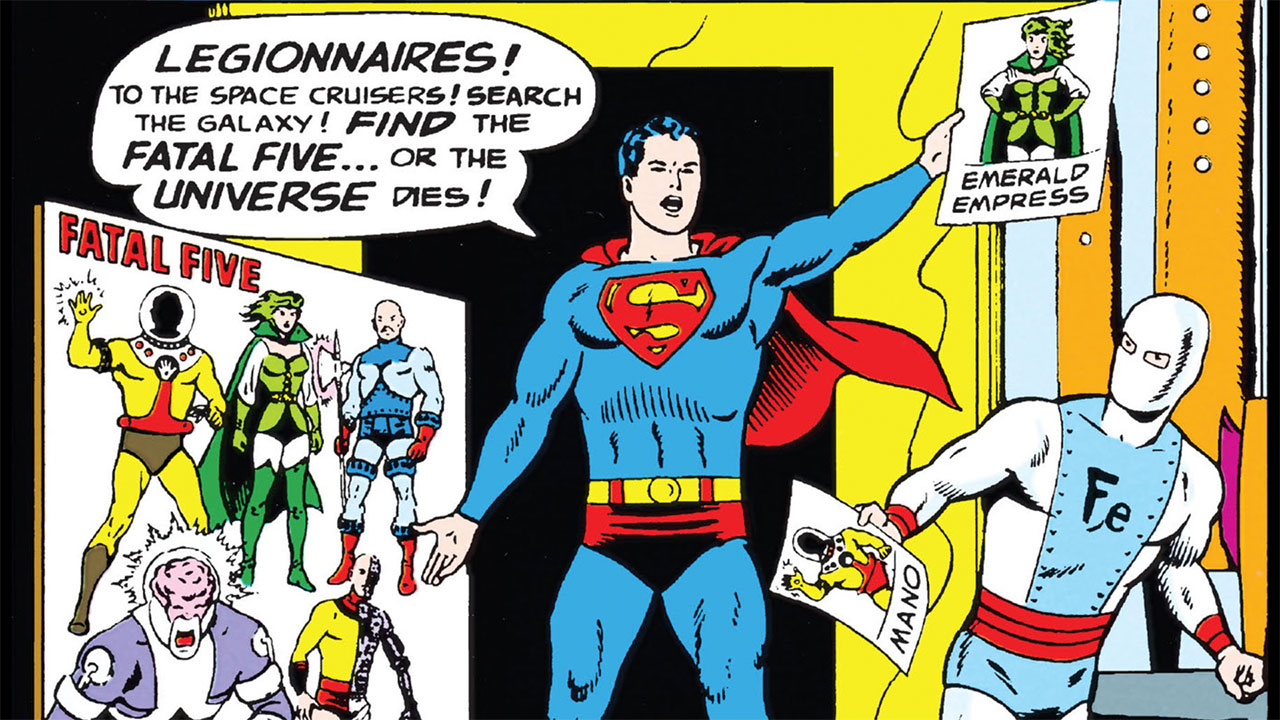 THE STORY: When a being of immense power called the Sun-Eater threatens to destroy the galaxy, the Legion of Super-Heroes are forced to worked with a criminal group known as the Fatal Five for their survival. Even with the fate of the entire galaxy at stake, the heroes and the villains struggle to find common ground as in-fighting threatens to destroy their uneasy alliance. Although most Silver Age comics avoided shaking up the status quo, this one had consequences. The cover to part 2 of the story boasts that one of the Legionnaires will die, and the story tragically delivers on that promise. If you feel like writer Jim Shooter has a great voice for young people, that’s because he was a teenager at the time! Despite his young age, Jim Shooter helped create many of the Legion’s greatest concepts and characters. All this plus classic Curt Swan art – where can you go wrong?

FOR FANS OF: End of the world scenarios, hero and villain team-ups, heroic sacrifices and Curt Swan artwork.

WHAT’S NEXT: Check out ‘Adventure Comics’ #356 for a fun tale where the Legionnaires are de-aged to toddlers.

BONUS: Check out the new animated film ‘Justice League vs. The Fatal Five’ which features the original cast of the 2001 ‘Justice League’ animated series reprising their roles. 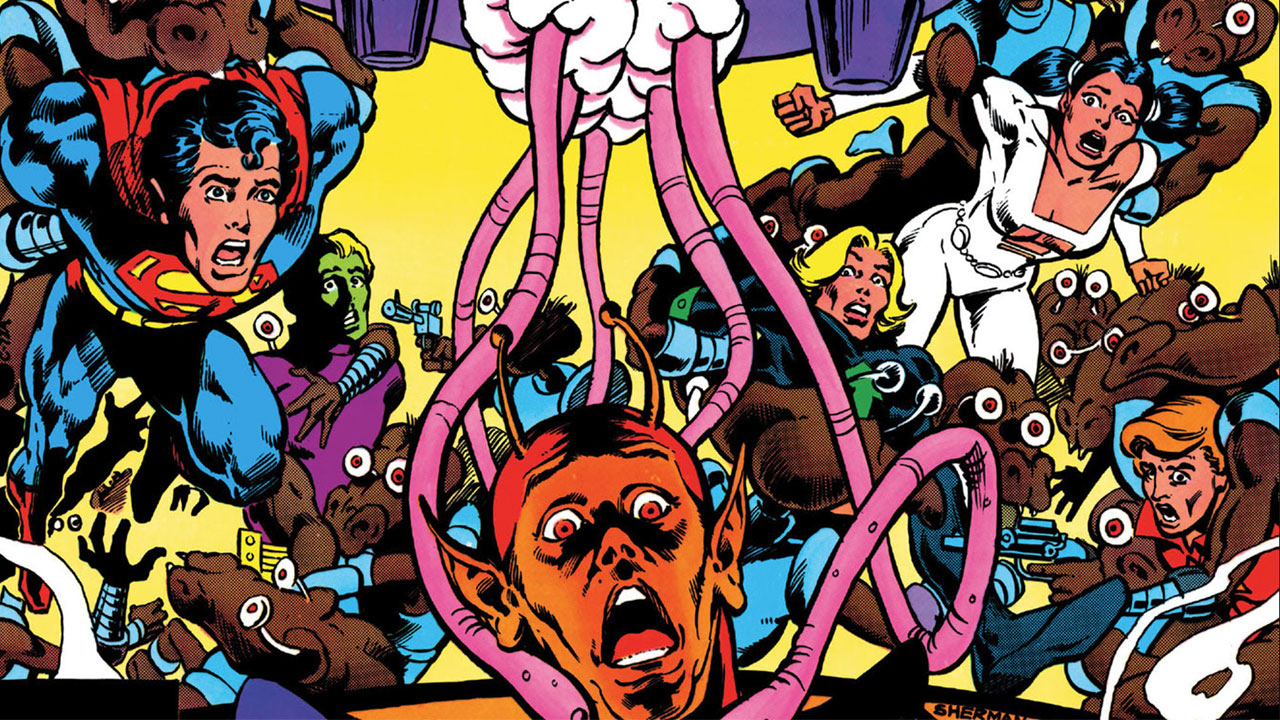 THE STORY: The Legion of Super-Heroes try to defuse an intergalactic conflict in one of their biggest sagas yet. An alien group known as the Khund are planning an invasion of the United Planets, and have set their sights on Earth. The conflict is so big, that the Legion is forced to call upon their former members, including Saturn Girl and Lightning Lad. The Legionnaires are determined to protect their galaxy, and take the fight to the Khunds, but will it be enough? This game-changing saga was written by Paul Levitz, who would later go on to become publisher of DC Comics.

WHAT’S NEXT: Find out what happens when the Legion heads to Krypton during its final days in 1979’s ‘Superboy and the Legion of Super-Heroes’ #255.

BONUS: A group of Legionnaires recruit Supergirl for a deadly mission in the ‘Justice League Unlimited’ episode “Far From Home.” 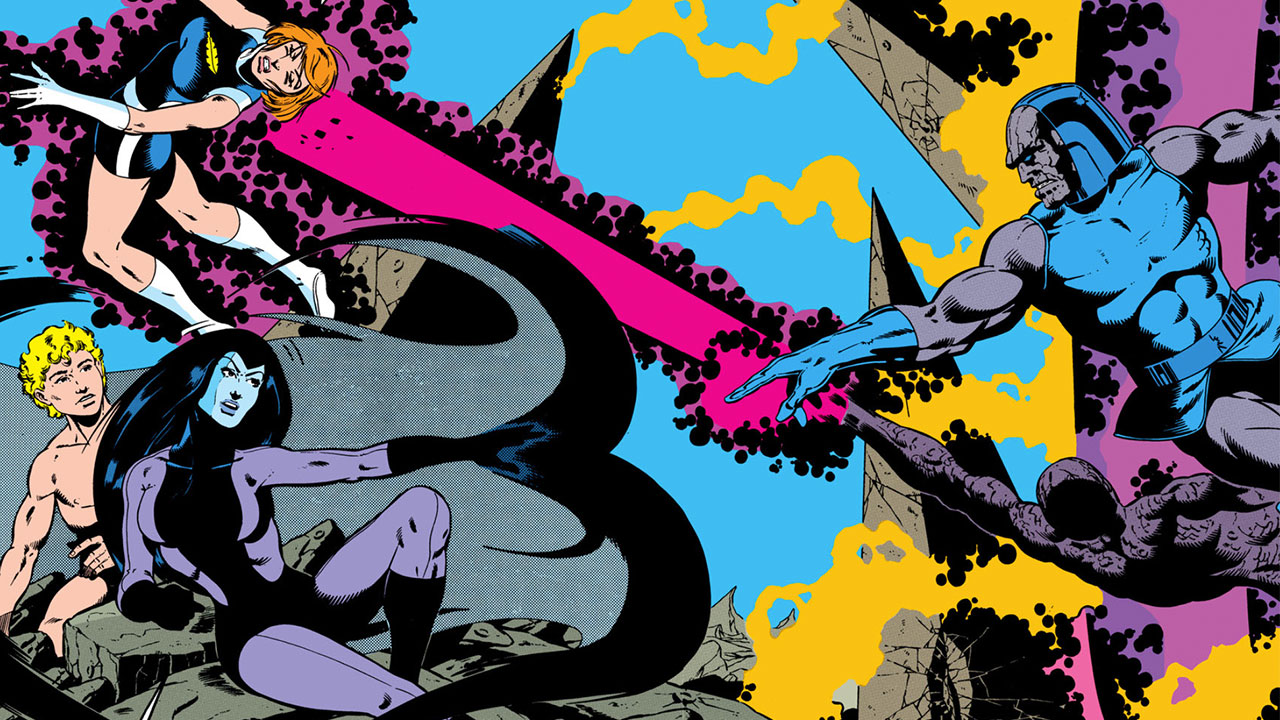 THE STORY: The warlord Darkseid is seeking to take over the 30th century, and even with their full roster, the Legion is hopelessly outmatched against the New God. It’s going to take the help of every former Legionnaire (That’s right, all of them) to stop Darkseid before he destroys everything from the United Planets and beyond. Along the way, old friendships are renewed, and Saturn Girl and Lightning Lad become parents – with a twist. Paul Levitz’s script is beautifully complimented by Keith Giffen’s art, whose space battle illustrations have made him a DC legend.

FOR FANS OF: The New Gods, giant fight scenes, space battles and prophecies.

WHAT’S NEXT: The Legionnaires rich mythology is celebrated in 1983’s milestone ‘The Legion of Super-Heroes’ #300.

BONUS: For a fun alternate take on how the team began, check out the ‘Legion of Super-Heroes’ episode “In The Beginning.” 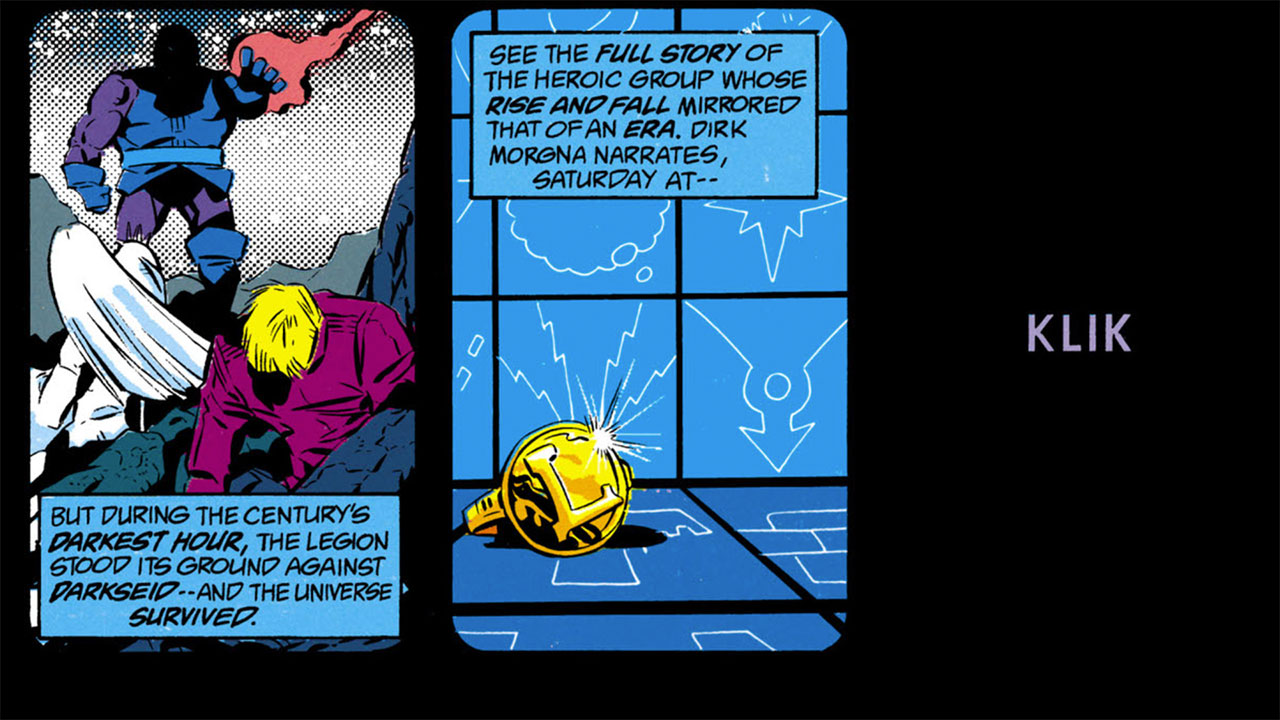 THE STORY: The Legion saga skips ahead 5 years, as the group has disbanded after the Magic Wars. Their clubhouse has been abandoned, and their flight rings have been discarded, and the United Planets is a shadow of what it once was. Earth is now ruled by the alien Dominators, and the galaxy needs the Legion now more than ever. Cosmic Boy is approached about reforming the Legionnaires, but is there a place for the idealistic group in this dark version of the future? The Legion’s Silver Age stories presented an optimistic version of the future, while this run shows how quickly things can go in the opposite direction. Writers Mary and Todd Bierbaum are joined by penciler Keith Giffen for a story that matures the Legion and the world around them, for a new series of adult-oriented adventures.

WHAT’S NEXT: The reformed Legionnaires take on Glorith in 1990’s ‘Legion of Super-Heroes’ Annual 1. 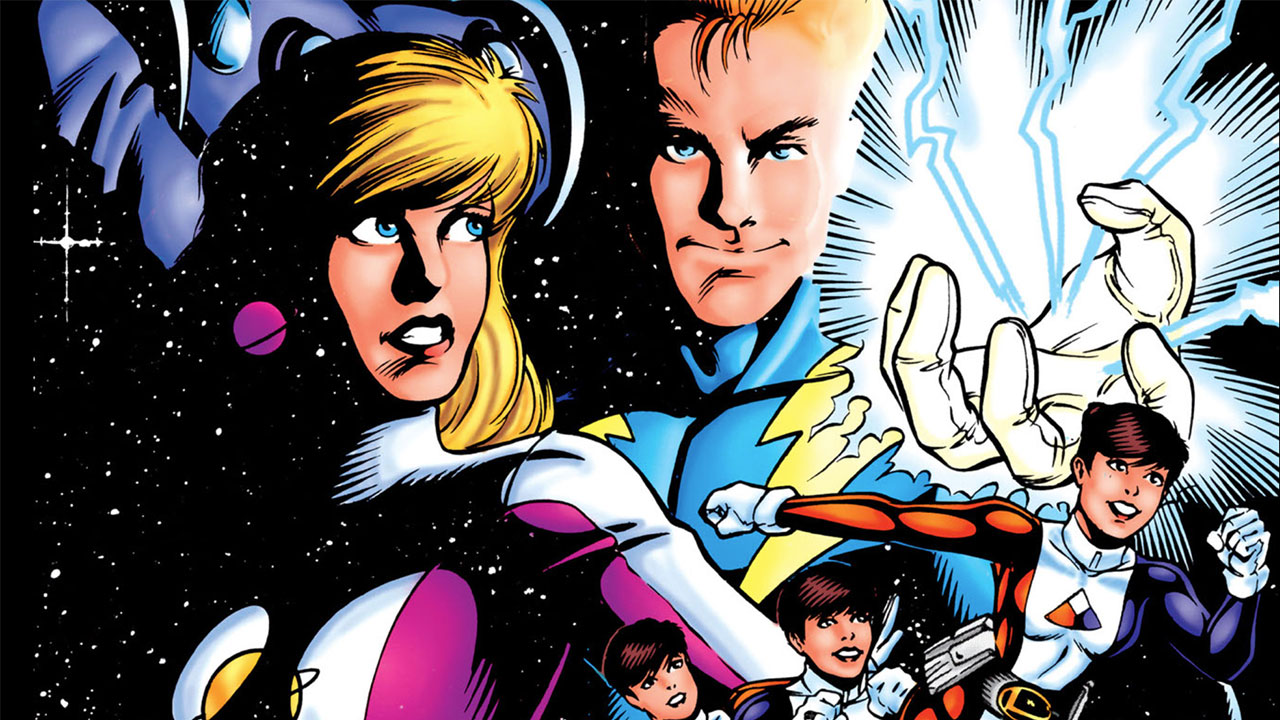 THE STORY: After the reality altering events of ‘Zero Hour,’ the Legion’s history was changed, paving the way for a new beginning for the team. Cosmic Boy, Saturn Girl and Lightning Lad (now renamed Live Wire) impress the United Planets Council after preventing an attack on the governing body’s headquarters. This inspires U.P. President Jeanne Chu (an homage to DC Comics President Jenette Kahn) to do a massive recruiting drive for the new Legion, which brings out new members like XS, granddaughter of the Flash. Mark Waid and Tom McCraw team up to usher in a new era for the Legion that brings the team back to their hopeful roots.

FOR FANS OF: Diplomatic missions, new teams forming, the Flash and planetary alliances.

WHAT’S NEXT: The new group of Legionnaires have their first outing in 1994’s ‘Legion of Super-Heroes’ #62.

BONUS: See what happens when Lightning Lad leaves the Legion for another team in the ‘Legion of Super-Heroes’ episode “Lightning Storm.” 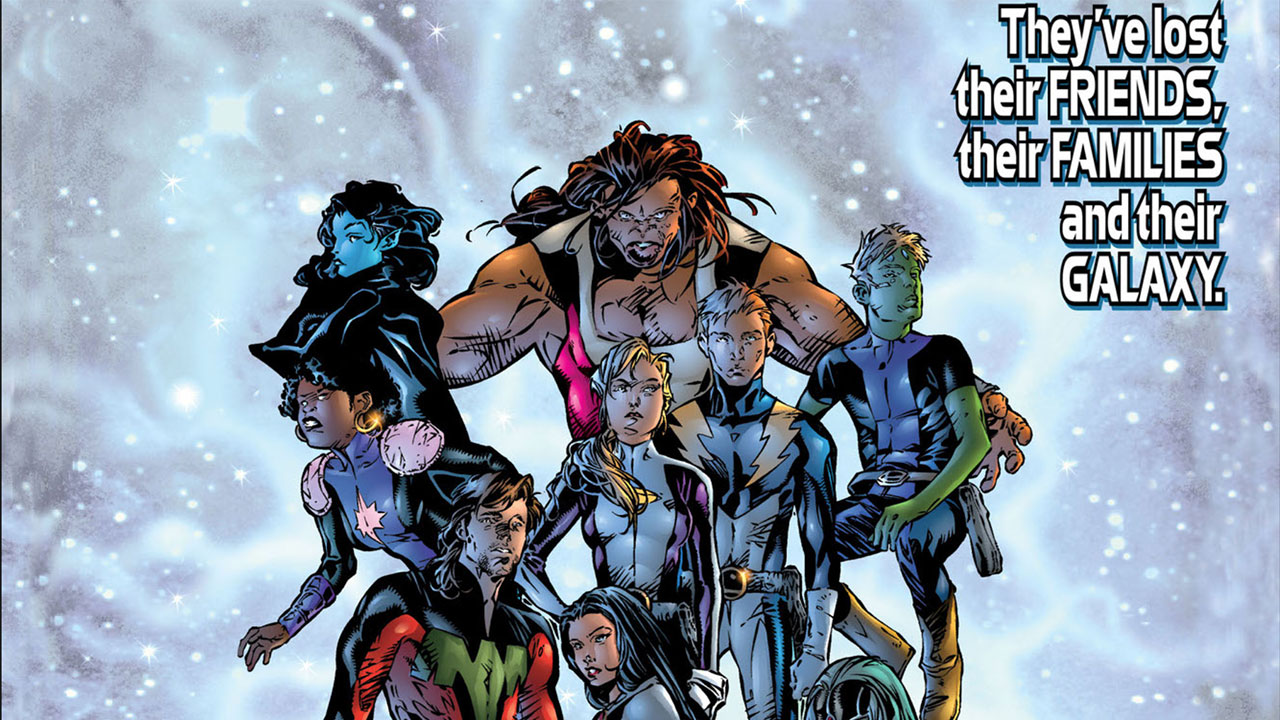 THE STORY: A group of Legionnaires have become stranded in a galaxy far from their own, and embark on a long journey back to the United Planets. As they make their way back home, the Legion take on an alien group called the Progeny, a species seeking to commit galactic genocide. Each issue of this limited series was narrated by a different Legionnaire, which helped make this a perfect jumping on point for readers seeking to learn more about the team. Dan Abnett and Andy Lanning take the Legion on a journey far from home, for an intergalactic odyssey that’s become a much beloved classic.

WHAT’S NEXT: Find out what happens when the wayward Legionnaires return in the 2001 series ‘The Legion.’

“Superman and the Legion of Super-Heroes” 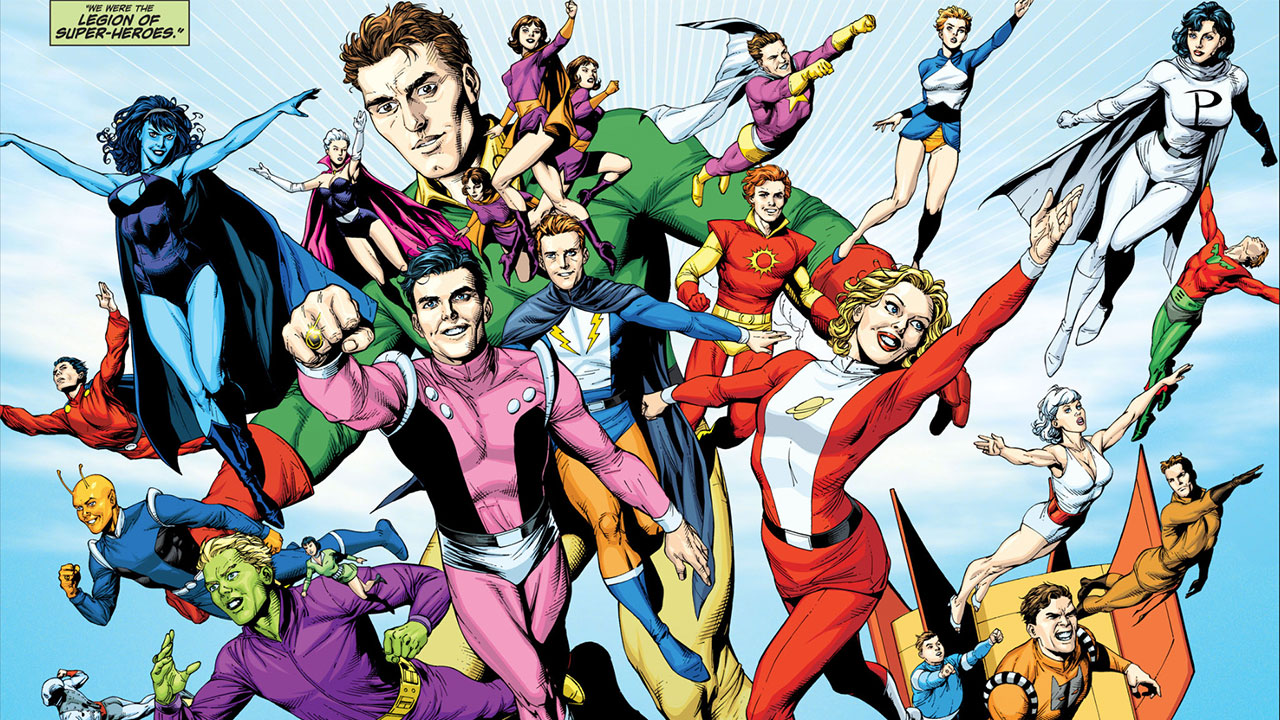 THE STORY: In the year 3008, Earth has left the United Planets and banned all alien life. Earth’s sun is now red, and the world is ruled with an iron fist by the Justice League of Earth. The Legion of Super-Heroes  travel back to the 21st century to recruit their friend Superman to set things right. Along the way, a series of flashbacks shed some light on Clark’s teenage history with the team, with a sequence of events pulled straight form the Silver Age. DC legend Geoff Johns teams up with artist extraordinaire Gary Frank for a story that not only reestablishes the Legion’s ties to Superman, but also restores the team to their original Pre-Crisis continuity. It was a new beginning for the team from the future!

WHAT’S NEXT: This reworked version of the Legion eventually got their own feature in the 2009 ‘Adventure Comics’ title.

BONUS: Check out the pilot episode of ‘Legion of Super-Heroes’ to see another version of their first meeting with Superman. 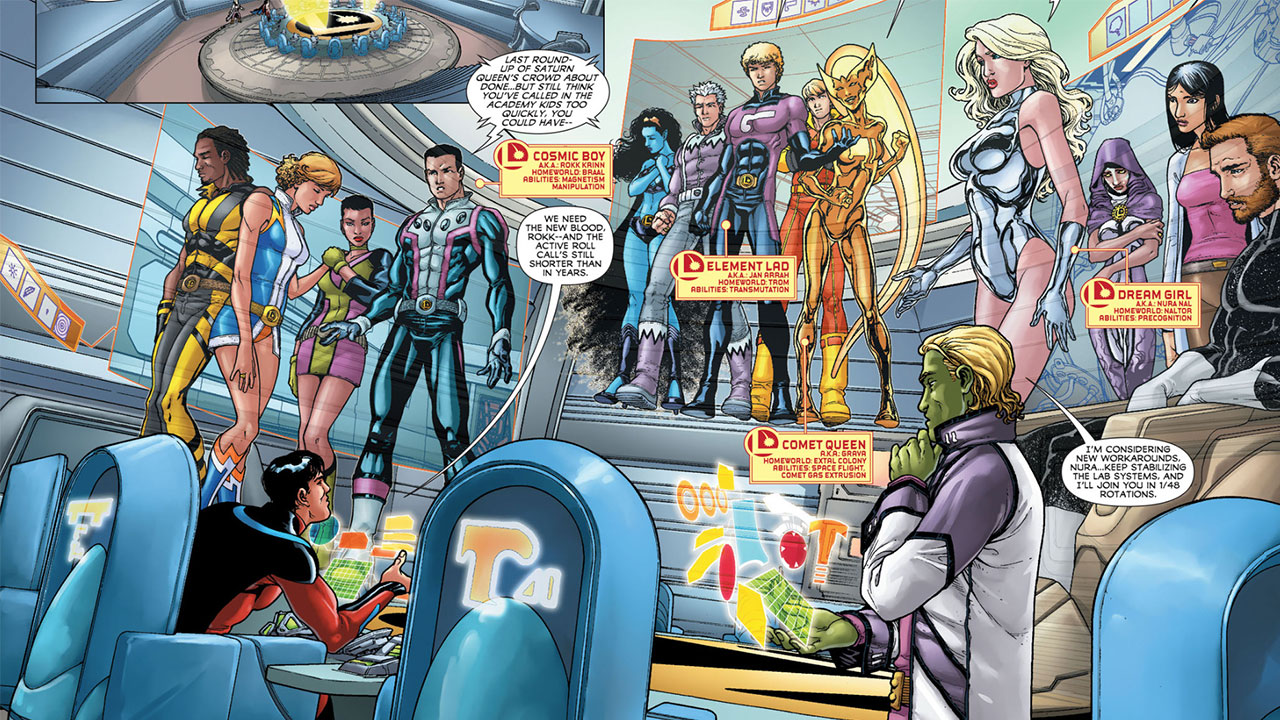 THE STORY: The next generation of heroes are honing their craft at the Legion Academy, but they’ll have to graduate fast when new threats emerge from Dominator space. Led by Mon-El, a new Legion of Super-Heroes must repel the invading Dominators before their power overtakes the galaxy. Paul Levitz, who crafted some of the Legion’s best stories in the Bronze Age, returns to take the next generation of the team to greatness.

FOR FANS OF: Redemption stories, schools of the future, alien invasions and espionage.

WHAT’S NEXT: A few Legionnaires wind up stranded in the 21st century in the 2011 ‘Legion Lost’ series. 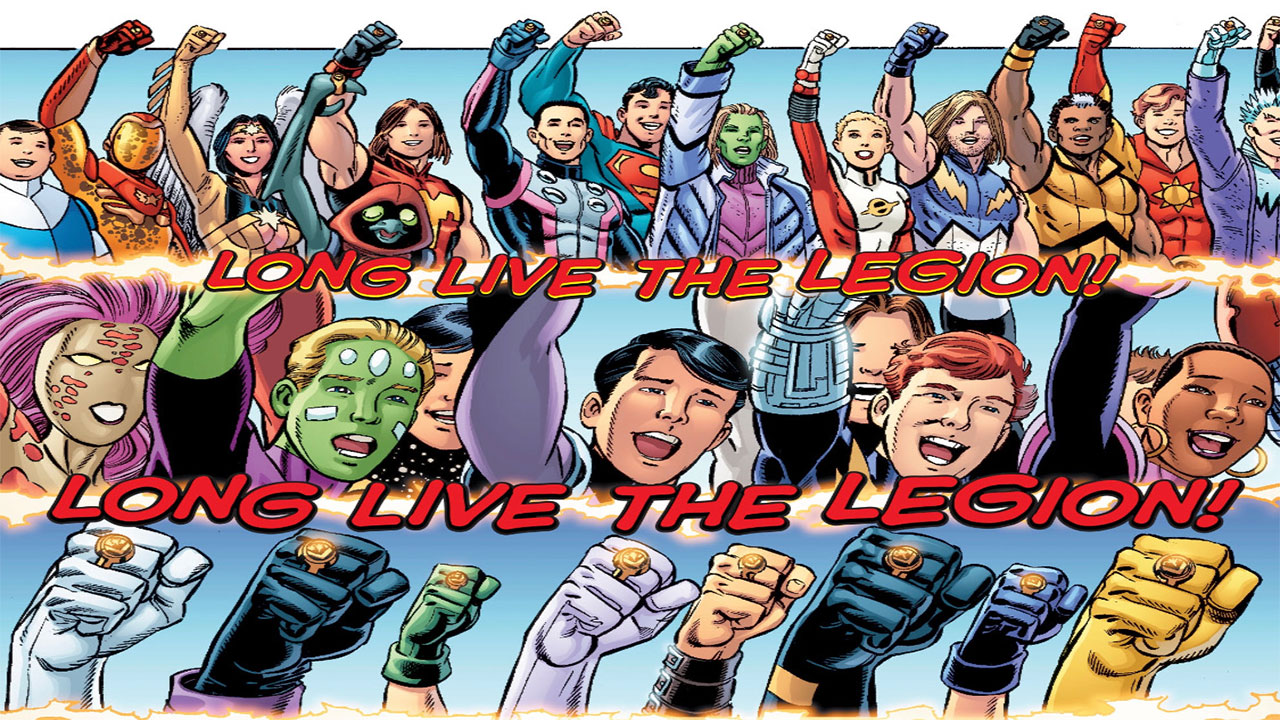 THE STORY: The Time Trapper has weaponized Superboy-Prime, and is using the young lad against the Legion of Super-Heroes. Fortunately for the Legionnaires, their other-world counterparts are here to repel the assault – if they can figure out how they’re co-existing first. All three versions of the Legion come together for an Easter egg filled team-up that will make longtime (and beginner) Legion fans stand up and cheer. Geoff Johns manages to put something in this limited series for every Legion fan, as each version of the team get their day in the sun, and their historical contradictions are resolved. DC superstar George Perez has always been great at illustrating large heroic gatherings, and that talent is put to good use here.

WHAT’S NEXT: The 2010 ‘Legion of Super-Heroes’ ongoing series chronicles the team’s newest adventures now that their history has been cleaned up.

WHERE TO FIND IT: ‘Final Crisis: Legion of Three Worlds’ #1-5

Who’s your favorite Legionnaire? Let us know in our Community!