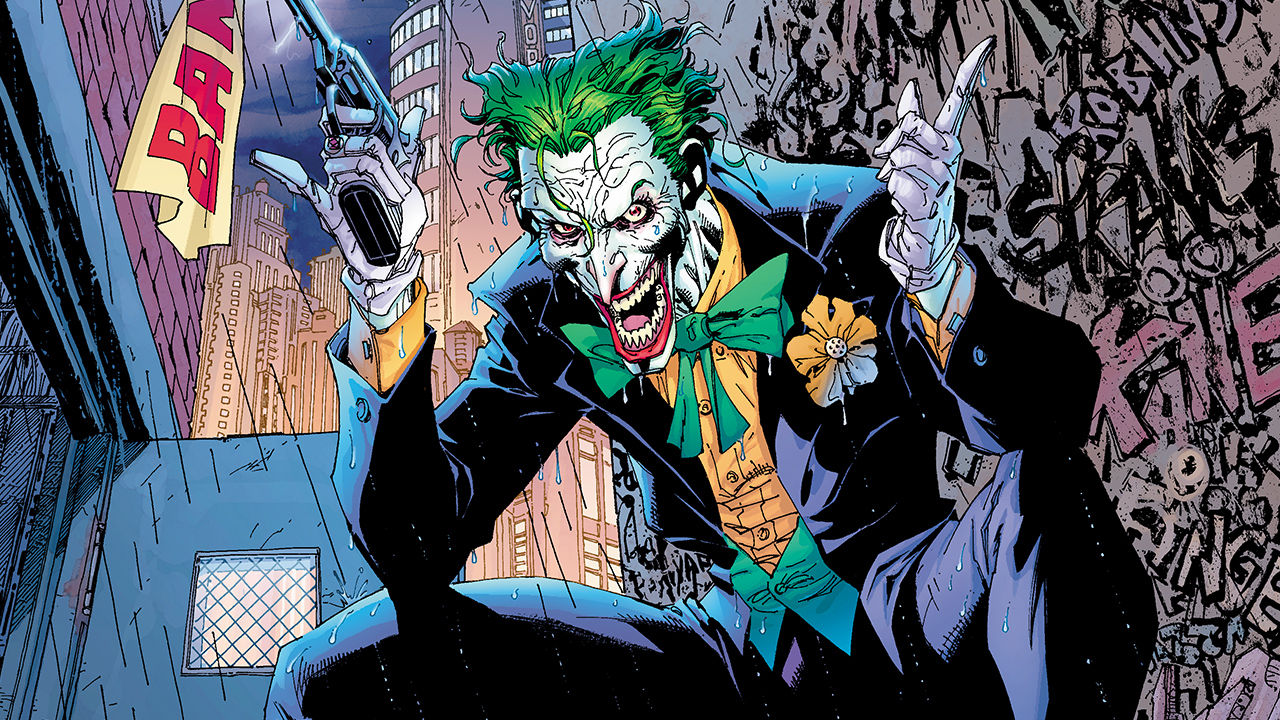 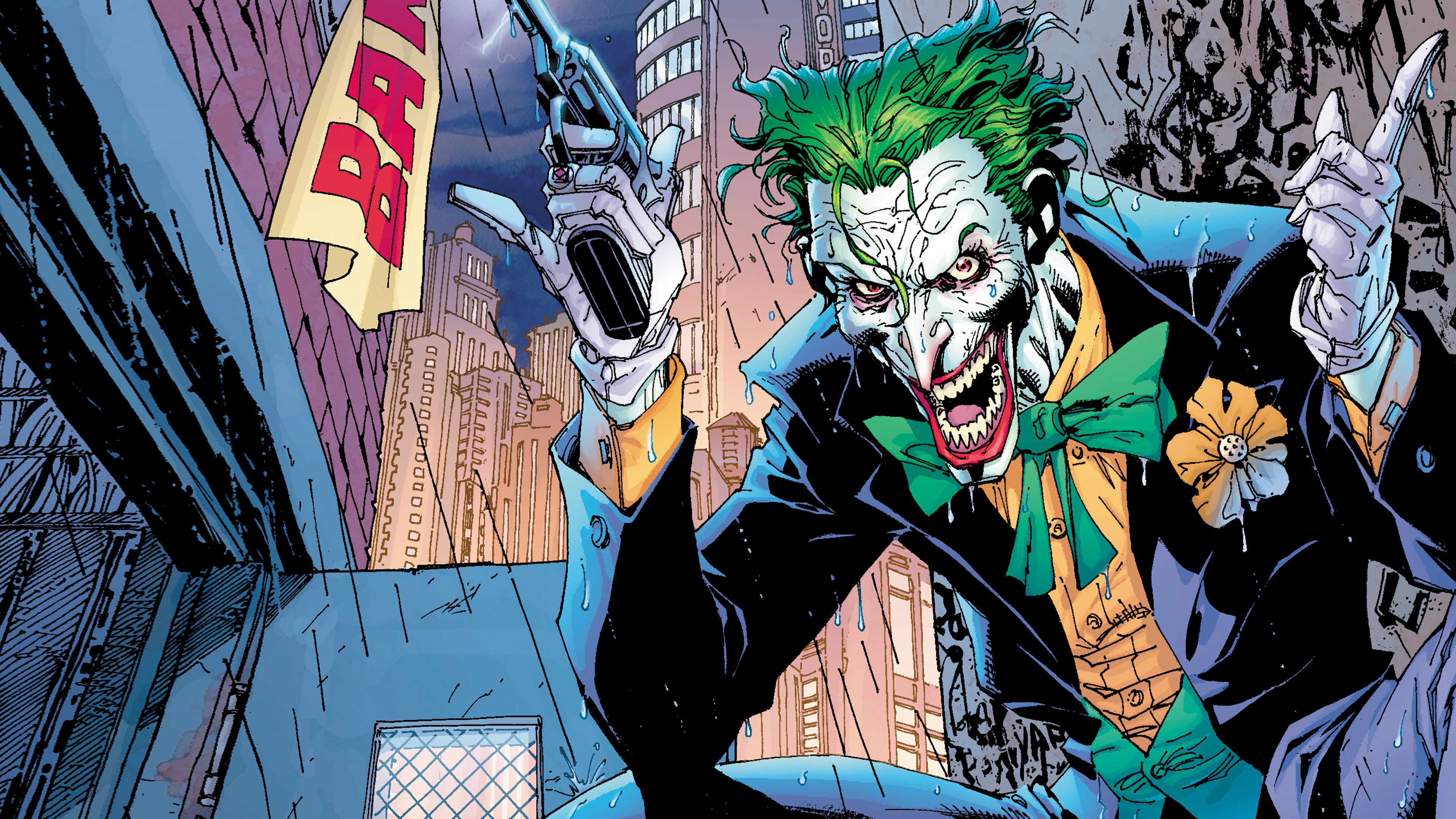 Where to Start Reading Joker Comics

Knock, knock. Who’s there? It's DC Universe’s digital library of over 80 years of comics! And it’s no joke – but it does contain a LOT of Joker. Batman’s greatest enemy has been known by many monikers, from the Harlequin of Hate to the Clown Prince of Crime, and his brand of deadly comedy has kept Gotham in terror since he first hit the scene in 1940. If you’re brave enough to experience the insanity of the greatest Joker stories, we have an epically loony list for you. Whether you like to dance to Prince at a parade, are fond of asking your friends “Why so serious,” or giggle with glee every time you hear Mark Hamill’s vocal performance as the Clown Prince in ‘Batman: The Animated Series’, there's a comic here that will hit your funny bone... 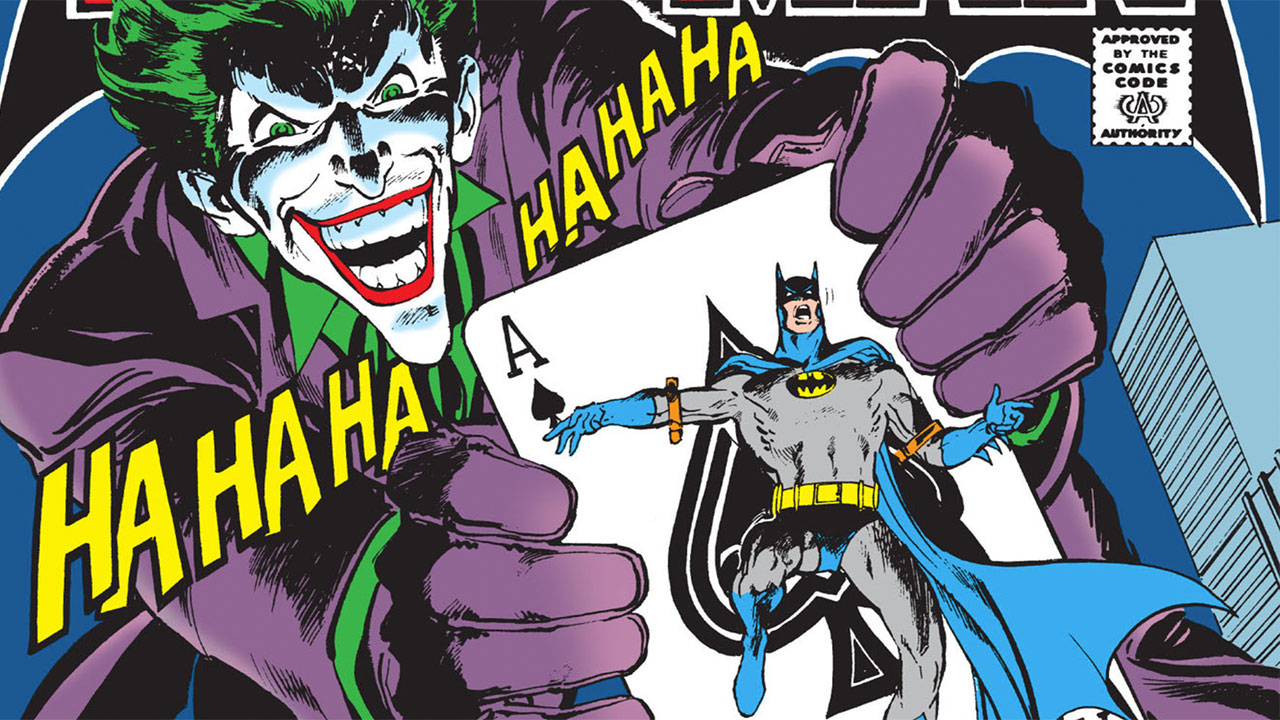 THE STORY: The Joker has escaped and is plotting revenge against his former associates who wronged him. Batman tries to outrace the Clown Prince before he kills his targets in theatrical yet sadistic ways, but constantly finds himself one step behind. The Dark Knight eventually catches up with the Joker, and it leads to one of the most memorable scenes in the Bronze Age as the Joker traps his foe in a tank with a hungry shark, and this time there’s no shark repellent spray! Not only was this story the Joker’s first appearance in 4 years (appearing last in 1969’s ‘Justice League of America’ #77), this was his first time committing murder since the Golden Age of Comics. The Joker quickly made up for lost time, racking up a respectable kill count in this story and re-establishing himself as Batman’s greatest enemy.

FOR FANS OF: ‘Batman: The Animated Series,’ death-traps, Shark Week, and revenge plots.

WHAT’S NEXT: “The Laughing Fish” (found in ‘Detective Comics’ #475-476) is often considered the spiritual successor to this story, and another great pillar in Joker Bronze Age comics.

BONUS: Many elements from this story were used in ‘Batman: The Animated Series’ adaptation of “The Laughing Fish.”

“The Joker: The Clown Prince of Crime” 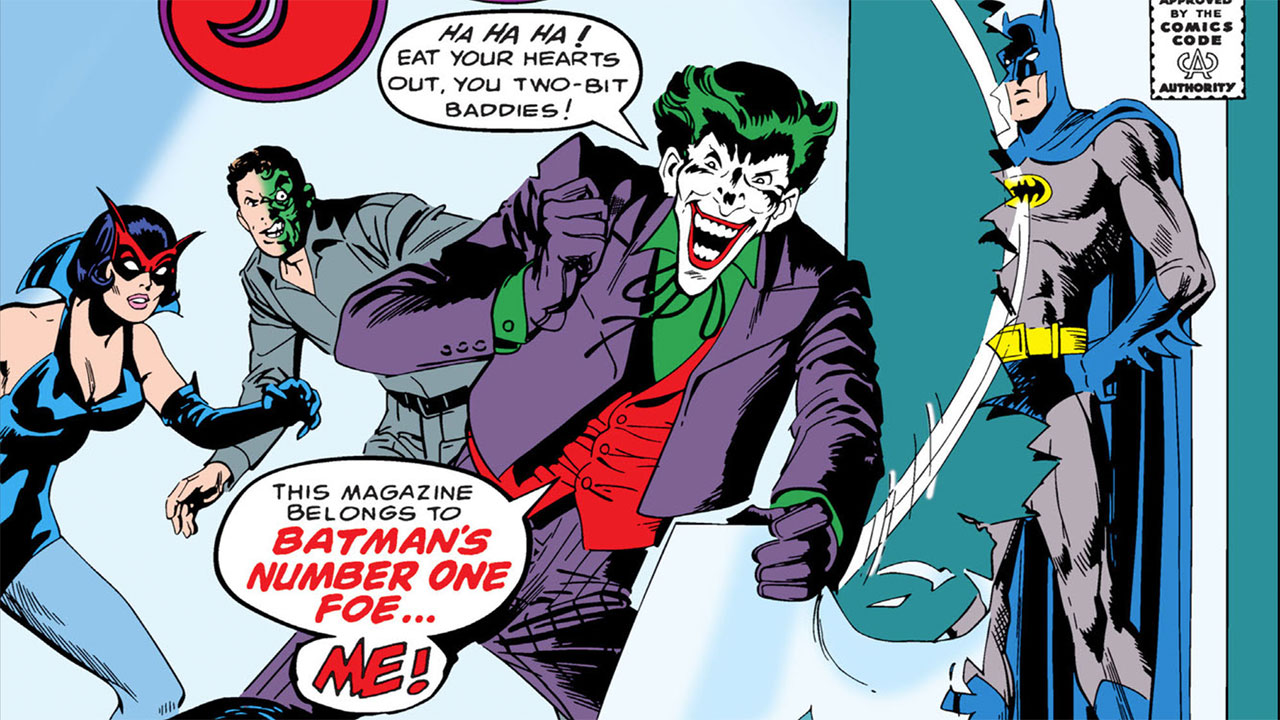 THE STORY: Did you know that the Joker had his own ongoing comic? In fact, he was the first member of Batman’s Rogues Gallery to receive his own title, and boy was it a fun one. Although the Comics Code of Authority had some stipulations (the Joker must end every issue in jail and his murderous tendencies must be toned down), that didn’t stop this series from producing some of the craziest Joker capers this side of Arkham. In order to truly let the Clown Prince shine, the Joker never fought Batman in this title, but he did face Sherlock Holmes, Black Canary, the Royal Flush Gang and more. There’s also a memorable story where Joker gets Lex Luthor’s genius while Luthor receives Joker’s insanity. If plots like that don’t make you curious, then wait until you see some of the talent on this title, including legendary DC artist Joe Luis Garcia-Lopez and Dick Giordano.

WHAT’S NEXT: Check out ‘The Brave and the Bold’ #111 for a story you never thought you’d see, as Batman teams up with the Joker!

BONUS: If you ever wanted to see what would happen if the Joker worked with Darkseid, then check out the ‘Super Friends’ episode “The Wild Cards.”

“Death in the Family” 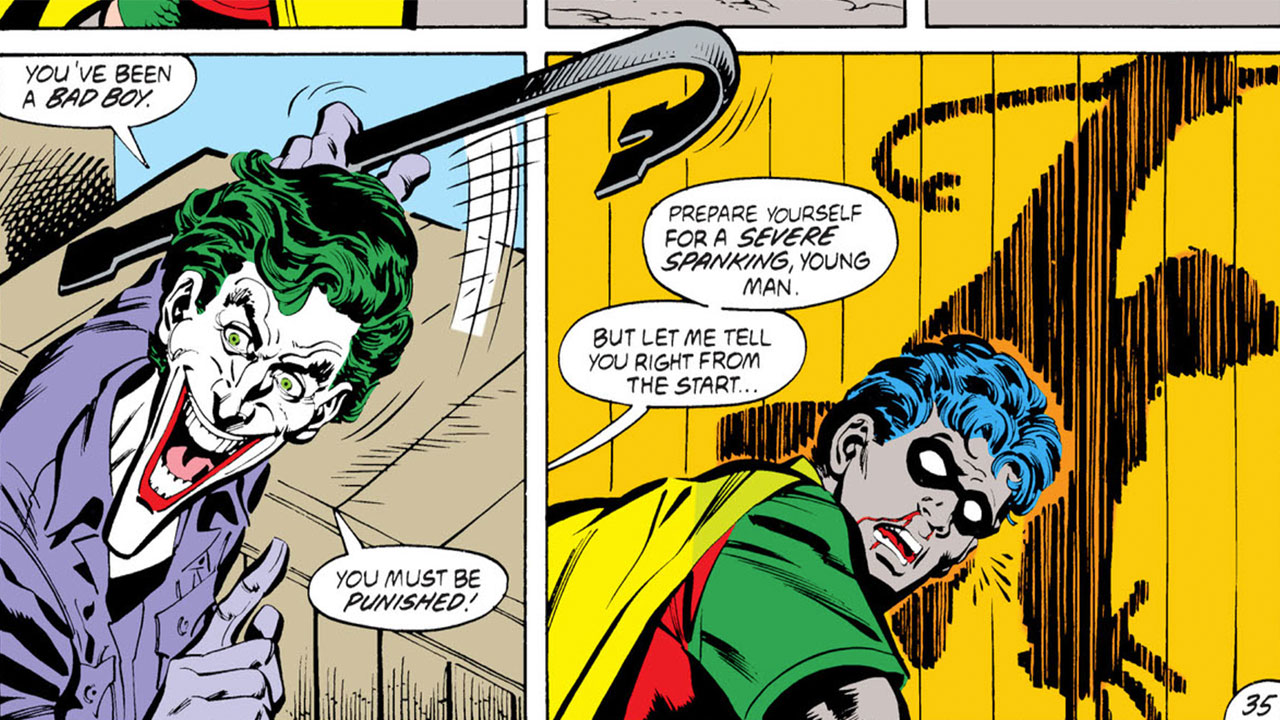 THE STORY: The Joker has stolen a nuclear weapon, and he’s traveled to the Middle East to sell it to the highest bidder. While he’s in Ethiopia, he catches up with Robin, who had just reunited with his long lost mother – a long lost mother who is being blackmailed by the Joker. The reputation for this story precedes itself, with the Clown Prince brutalizing Jason Todd with a crowbar, before finishing off the Boy Wonder with a bomb. While that’s what the story is famous for, most people tend to forget the crazy stuff that happens to the Joker afterwards, like him gaining diplomatic immunity and becoming the Ambassador of Iran! The story is brilliantly written by Jim Starlin, who elevates the Joker by having him do the unthinkable – killing Robin! The storyline also contains some of the most iconic penciling from Jim Aparo, who’s distinctive “long-faced” version of the Joker remains one of the most memorable depictions of the Clown Prince from this era.

WHAT’S NEXT: The Joker next confronts the Dark Knight in ‘Batman’ #450-451, forcing the Caped Crusader to come to grips with his intense desire to avenge Jason.

BONUS: The Joker’s brutal assault on Jason Todd was adapted in the 2010 animated film ‘Batman: Under the Red Hood,’ where the Joker is voiced brilliantly by cartoon voice legend John DiMaggio. 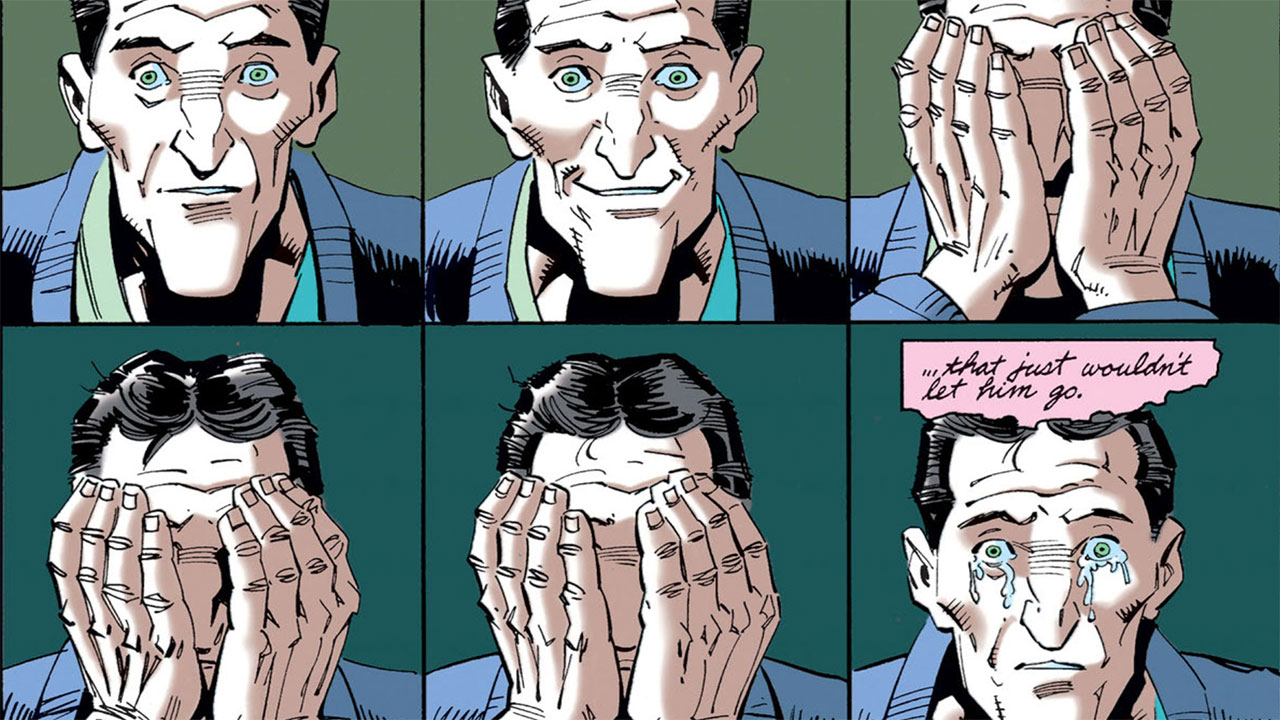 THE STORY: What’s scarier than a murderous Joker? How about a Joker play-acting as a normal everyday accountant? After a climatic battle between the Dark Knight and the Clown Prince ends in an explosion, the Joker believes Batman to be dead and starts to rethink his whole life. What is Joker without a Batman to spar with? The Joker slowly loses memory of his criminal career, and believes himself to be a normal boring everyday accountant. He calls himself Joseph Kerr (get it?) begins to romance his neighbor Rebecca, and lives a life free of violence, but his nightmares remain. Can the Joker truly leave his old life behind, and what will happen when he finds out Batman isn’t dead after all? For decades fans have been speculating on the Batman and Joker’s relationship and if one could truly exist without another, and writer J.M. DeMatteis explores how it would all play out. By the way, check out how Joe Staton draws the sane version of Joseph Kerr. Chilling, isn’t it?

FOR FANS OF: Horror films, twisted romance, psychological thrillers, and tales of amnesia.

WHAT’S NEXT: Find out what happens when the Joker gets his own protégé in the 1999 one-shot ‘Batman: Joker’s Apprentice.’

BONUS: To see another version of Joker reacting to the Dark Knight’s death, check out the ‘Batman: The Animated Series’ episode “The Man Who Killed Batman,” which features one of Mark Hamill’s most memorable monologues as the Clown Prince of Crime when he eulogizes his former nemesis. 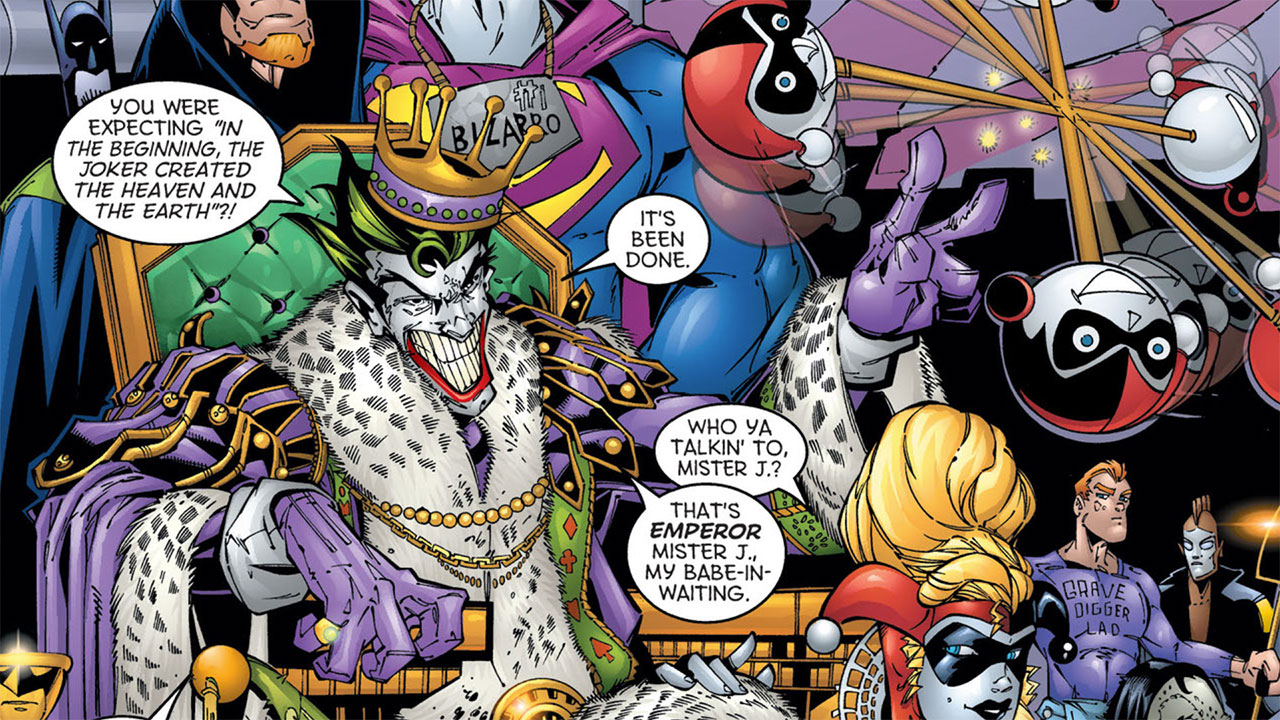 THE STORY: If the thought of Joker having unlimited reality altering powers doesn’t frighten you, then it should. The Joker is able to outsmart Mxyzptlk and tricks the Fifth Dimensional Imp into transferring his powers over to the Clown Prince. Now the Joker has remade the world in his own image, and is using his vast powers to kill and resurrect Batman over and over again. Unfortunately, the Joker’s grasp on the fabric of reality is delicate, and his reckless magic threatens to the tear the universe apart – something that the Joker doesn’t seem to care about. Can Superman stop a Joker with infinite powers?

WHAT’S NEXT: Travel deeper inside the Joker’s twisted mind (if you dare) in ‘Joker’s Asylum: Joker’ #1.

BONUS: ‘Batman: The Brave and the Bold’ had their own fun homage to this storyline with the episode “Emperor Joker,” which featured dozens of fun comic book Easter eggs. 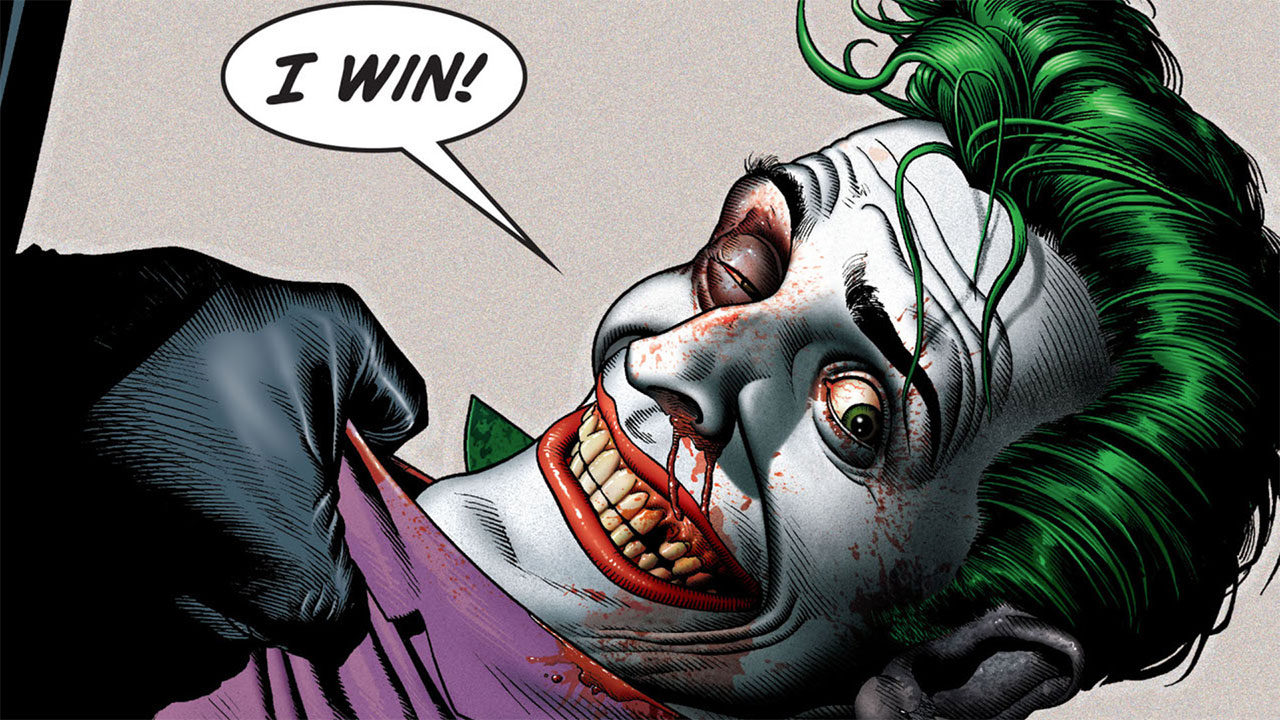 THE STORY: The Joker has been informed by prison doctors that he’s dying, and he decides he’s going to go out with a bang! The Joker infects the other inmates at the Slab prison with his venom, and creates his own army of criminal Jokers. He intends to take things even further by creating a Joker Venom version of rain to turn the world into versions of him. He also kidnaps Harley, hoping that she’ll continue his lineage by bearing his child. Yikes! How brutal can the Joker get, and will Nightwing be able to hold back when he’s tricked into thinking the Joker has murdered Tim Drake? Legendary Bat-writers Chuck Dixon and Scott Beatty (the iconic team behind ‘Batgirl: Year One’ and ‘Robin: Year One’) unleash the Joker in a way that will leave Bat-readers shaken to their core.

WHAT’S NEXT: Nightwing isn’t the only one who nearly killed the Joker! Batman almost crosses that line in ‘Batman’ #614, a chapter of the epic “Batman: Hush” saga that examines the Dark Knight’s relationship with the Joker.

BONUS: The Joker is marked for death by a mysterious assassin in the 1993 animated film ‘Batman: Mask of the Phantasm,’ featuring one of the most brutal fights between Mark Hamill’s Joker and Kevin Conroy’s Batman.

“The Man Who Laughs” 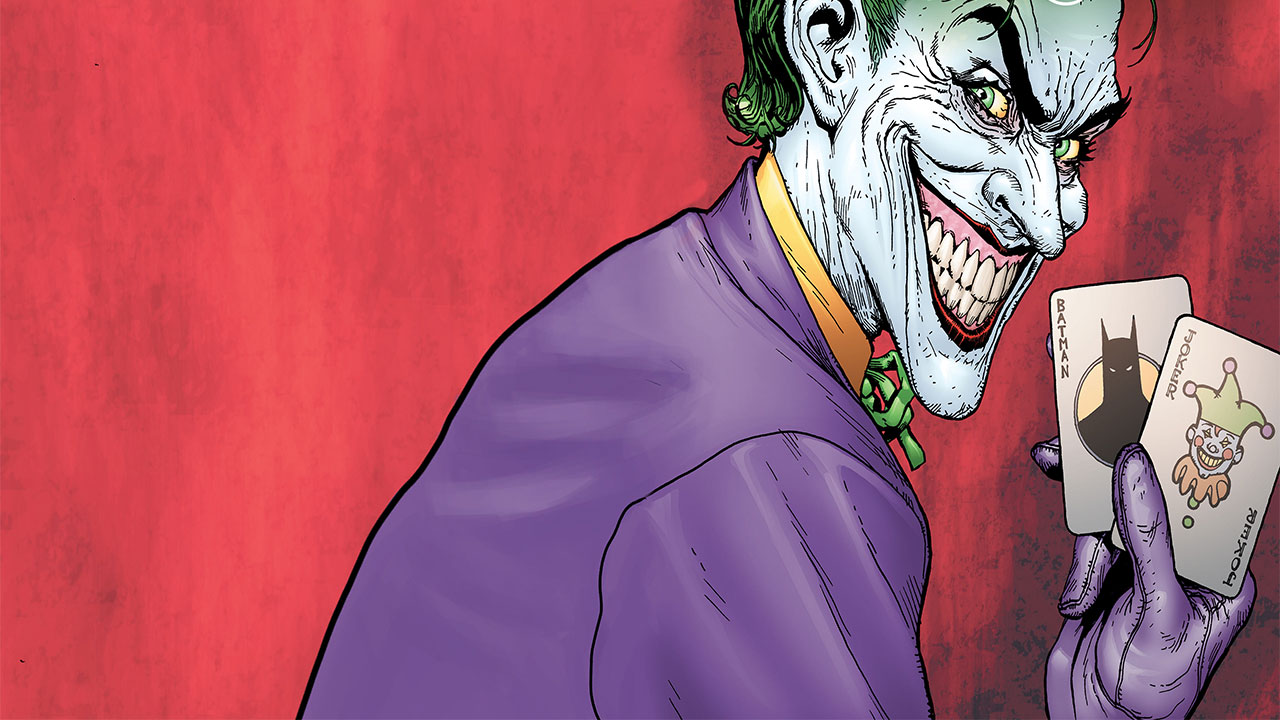 THE STORY: Batman and Joker’s first meeting is retold as a gritty detective thriller in this prestige one-shot. This story adapts the Joker’s first appearance from the Golden Age (more on that later) and expands on it, adding deeper pathos while exploring Batman’s reaction to this new sadistic killer. Who is this clown-faced murderer, and how is he continuing to evade Batman as he brazenly announces each murder before he commits it? This retelling is written by comic book legend Ed Brubaker, whose crime noir script is perfectly complimented by the moody illustrations of Doug Mahnke. The Joker’s gritty characterization in this story also helped inspire Heath Ledger’s iconic performance in the 2008 film ‘The Dark Knight.’

WHAT’S NEXT: For an alternate take on Batman’s first encounter with the Clown Prince of Crime, check out ‘Batman: Legends of the Dark Knight’ #50.

WHERE TO FIND IT: ‘Batman: The Man Who Laughs’

BONUS: The Joker makes a startling first impression when he meets Batman in the first episode of the 2005 ‘The Batman’ series “The Bat in the Belfry.” 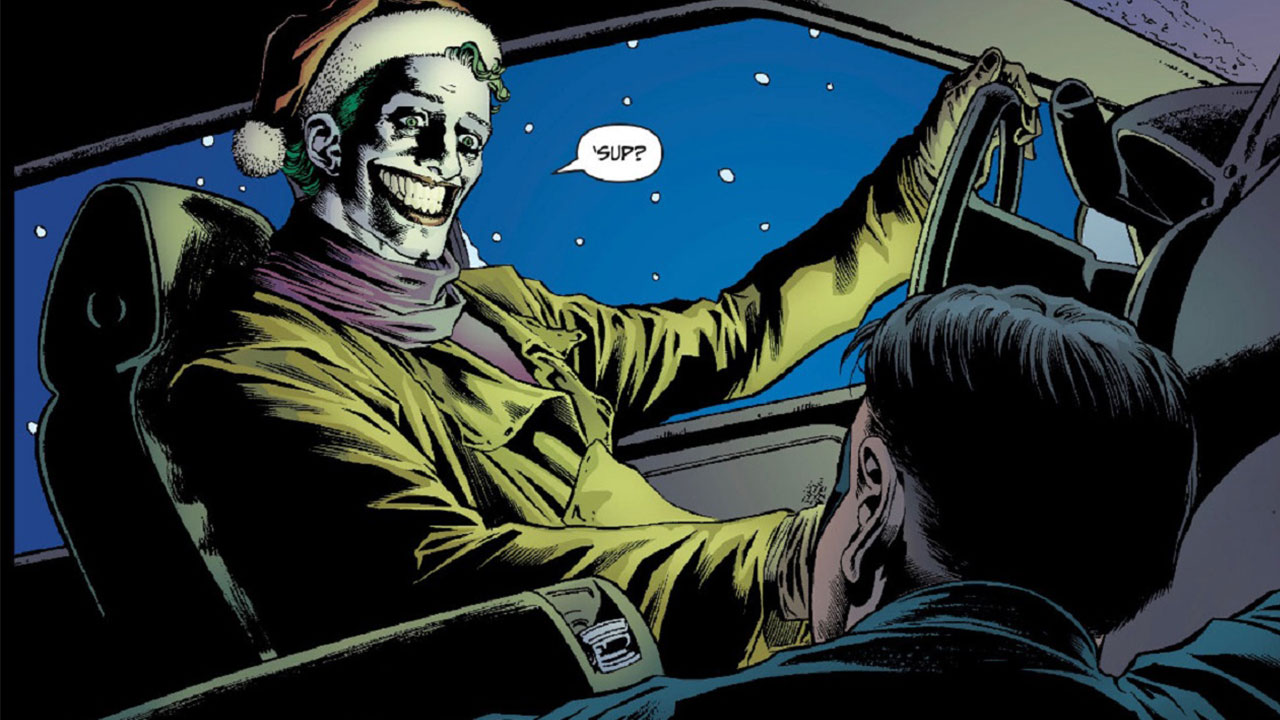 THE STORY: During a night on patrol, Robin slips up and finds himself captured by Joker. The Clown Prince has longed for a chance to kill another Boy Wonder, so he decides to savor the moment by driving the captive Robin through the city gagged and bound – helpless to do anything but watch as the Joker creates mayhem wherever the car goes. Tim Drake has always been known for his keen mind, but can he be resourceful enough to escape this deathtrap on wheels? The story is a simple one-shot, that can almost be considered a “bottle episode” after the high stakes crossover stories of the era. If the Joker’s characterization in this story reminds you of ‘Batman: The Animated Series,’ that’s because this comic was written by Paul Dini – the co-creator of Harley Quinn and the brain behind some of the series best episodes.

WHAT’S NEXT: The Joker steps up his game, proving to Gotham that he has new levels of horror untold, in ‘Batman’ #663.

BONUS: If you enjoy seeing the Joker take on young heroes, then you’ll love his appearance in the ‘Young Justice’ episode “Revelation,” where he’s superbly voiced by 'Star Trek: The Next Generation' star Brent Spiner. 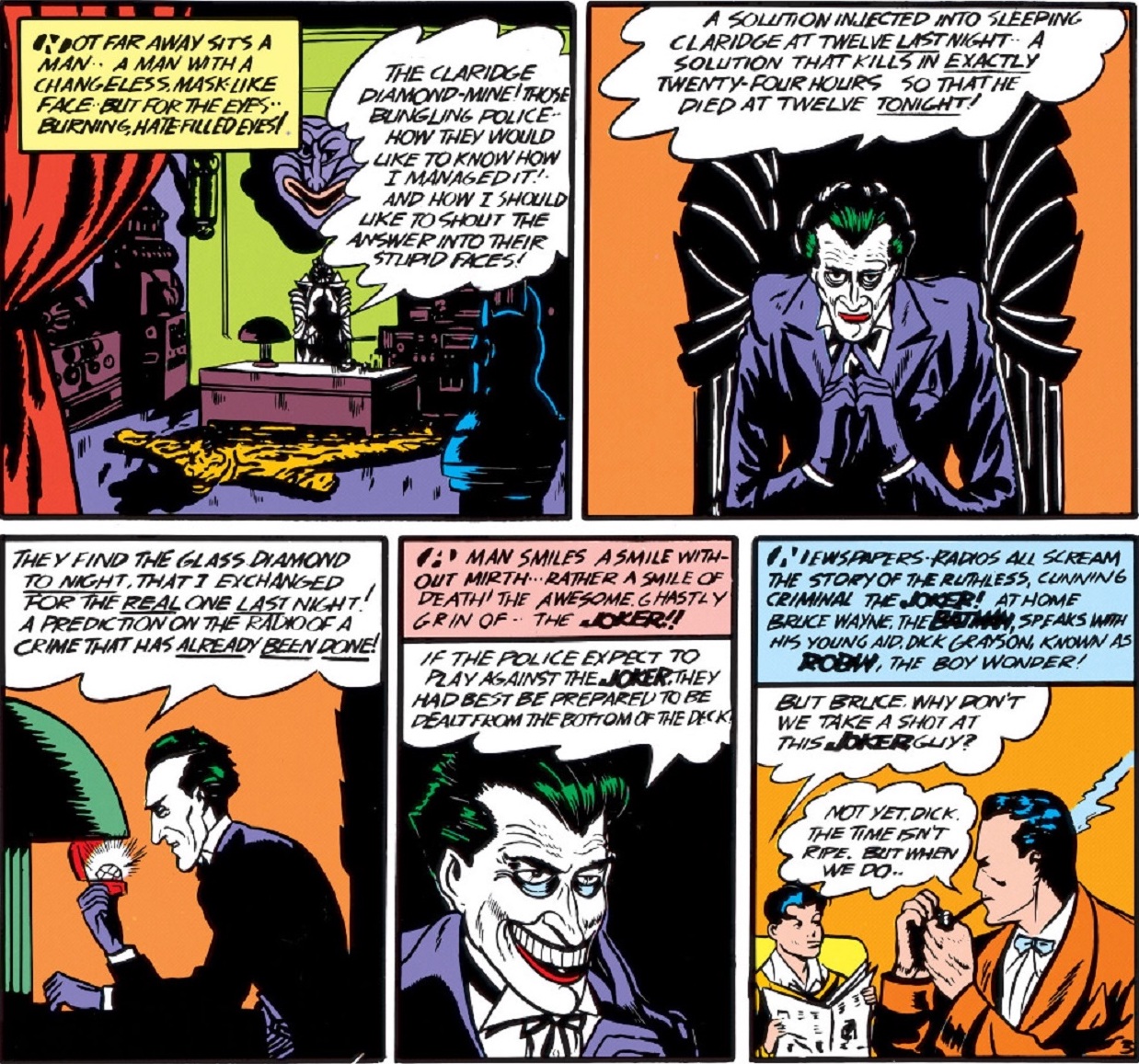 THE STORY: If you want to start from the beginning, or you're curious fan who wants to see how the Joker evolved, his first appearance written by Bill Finger and illustrated by Bob Kane and Jerry Robinson is a must read! If you think the Joker's tamer because this was published in 1940, think again! Not only does Joker go on a killing spree in this story, he taunts his future victims by announcing their murders over the radio 24 hours in advance. Now that’s twisted -- and surprisingly close in spirit to Heath Ledger's Joker in 'The Dark Knight.'

WHAT’S NEXT: 1946’s ‘Batman’ #37 is one of the most amusing Golden Age Joker stories, as the Clown Prince blatantly rips off Batman by making his own Jokermobile, Joker signal, and more!

BONUS: The script is flipped in the ‘Batman: The Brave and the Bold’ episode “Joker: The Vile and the Villainous,” as the story is told from the Clown Prince’s point of view.

What’s your favorite Joker story? Let us know in our Community!