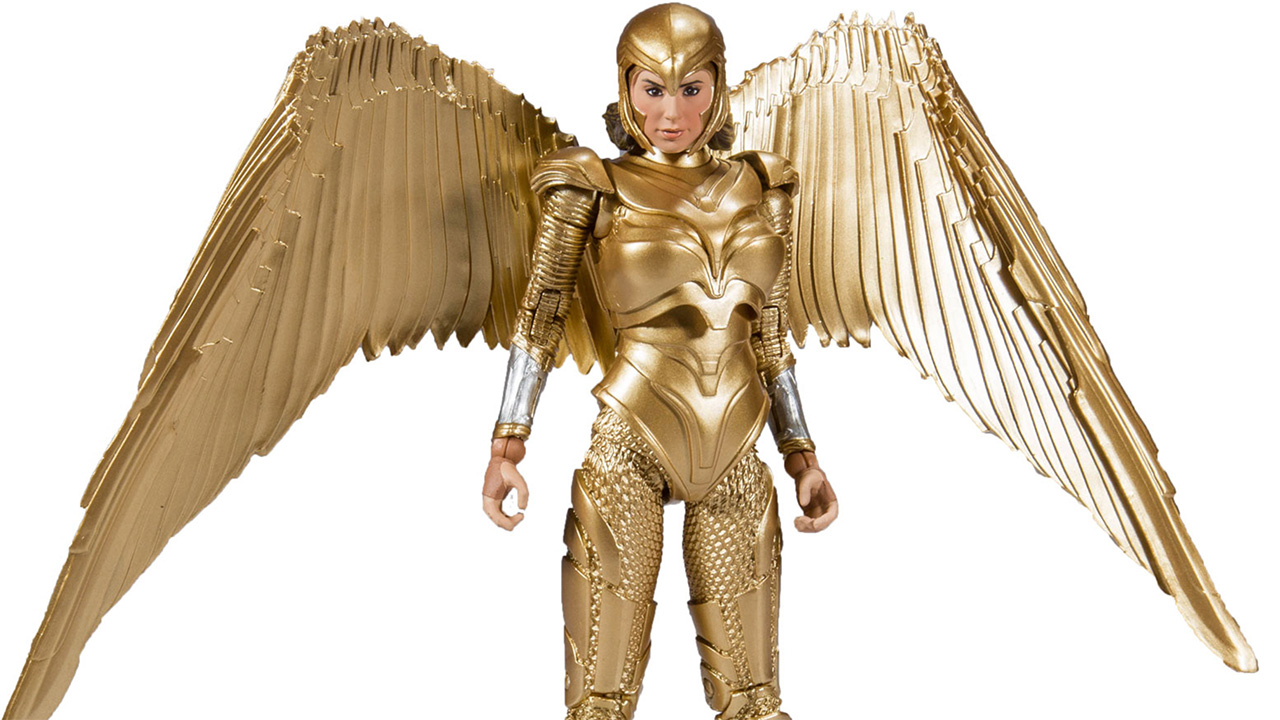 Where Does She Get Those Wonderful Toys: A History of Wonder Woman Figures

For years, Wonder Woman has been an important part of playtime for children and adults around the world, with fans creating their own adventures starring the Amazonian princess. As the decades have gone by, Wonder Woman action figures have become more elaborate, and they've made playtime -- and collecting -- a more wonderful experience. To celebrate Wonder Woman’s grand toy legacy, let's take a look at some of her most iconic action figures.

The year was 1966, and Batmania was sweeping the nation. A toy company called Ideal decided to get in on the craze by releasing their own miniature playsets. A 3.5-inch Wonder Woman was included with Ideal’s Justice League playset, alongside its fellow JLA member figurines, and although she didn’t have a lot of detail, she still encapsulated everything readers loved about Diana. Wonder Woman stood with her arms in the air triumphantly, proudly displaying her golden bracelets. In an age where female action toys were rare, Wonder Woman broke barriers, just like she did in the comics.

By 1974, a new generation of kids had fallen in love with the heroine. Super Friends had premiered the previous year, which led to schoolchildren emulating the Amazonian Princess in the playground. The world was hungry for more Wonder Woman, and a toy company called Mego delivered. Mego had been famous for their line of 8-inch superhero action dolls, and in 1974 they introduced the "World’s Greatest Super Gals" line, which included Wonder Woman, Batgirl, Supergirl and Catwoman. Kids had fun waking up in the morning to watch Super Friends with their Wonder Woman Megos, as they made the doll match whatever action pose Diana struck in the episode. By 1977, Lynda Carter’s Wonder Woman series was in its third season and Mego decided to add Wonder Girl to their product line, as part of Mego’s Teen Titans lineup. 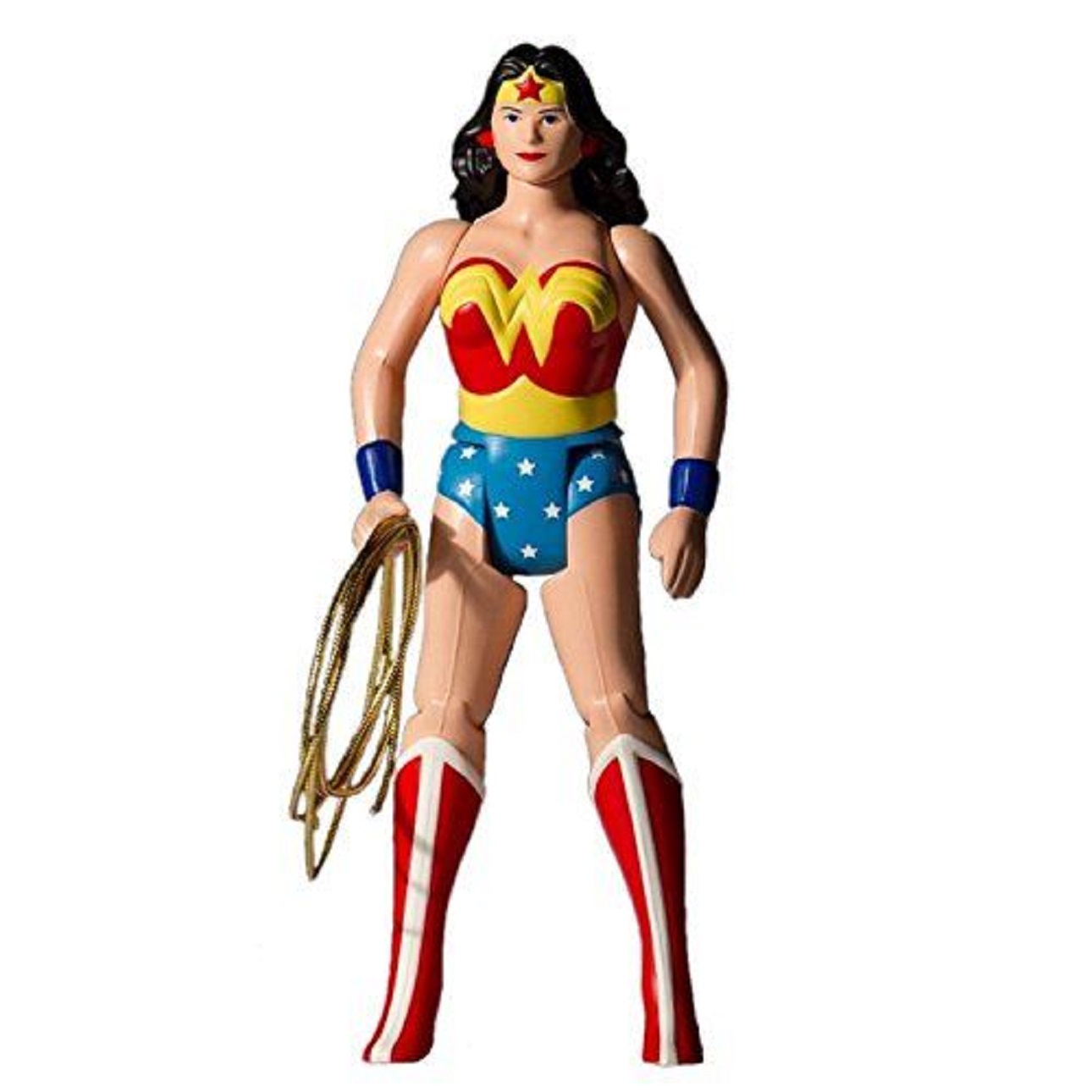 While superhero fans from the 1970s have fond memories of Megos, for kids in the 1980s it was all about Kenner’s Super Powers collection. Wonder Woman (pictured above) was part of the toyline’s official launch in 1984, and she stood at roughly 4 inches. She came with a free mini-comic book and the packaging proudly boasted her “Power Action Deflection Bracelets,” which would activate when her legs were squeezed together. The previous toys were dolls and figurines, but this was a true ACTION figure! This Diana could hold a golden lasso, bend her knees for awesome kicks, and raise her arms to block enemy fire. The Super Powers toyline was so popular, that it spawned it’s own spinoff comic and was given a special shoutout in 1985's Fifty Who Made DC Great commemorative one-shot, celebrating the company's 50th anniversary.

Flash forward to 1999 for the next awesome era of Wonder Woman action figures. Diana got not one but TWO different figures as part of DC Direct’s second wave of products. The first figure included a battle axe and a shield -- as Wondy had periodically sported since her 1987 reboot -- and the second had golden chest plate armor, a removeable helmet, and a battle spear. Batman and Superman were not included in DC Direct’s first year, but Wonder Woman got two figures. Sorry, boys, but neither of you could pull off a battle axe like Diana!

The demand for Wonder Woman continued, with DC Direct releasing a variety of Wonder Woman figures in the following years. In 2000, Diana got a Golden Age variant figure, modeled after her first appearance in All-Star Comics #12. This gorgeous throwback included a gold cord lasso, a golden shield, and a battle blade. Fans of Wonder Woman’s 1960s adventures were rewarded one year later when DC Direct released a Silver Age Action Figure Set of Wonder Woman and Wonder Girl. Diana wore her classic Silver Age costume, as seen in the early Justice League of America stories, while Donna sported her popular red jumpsuit that had debuted in 1969’s Teen Titans #22. It didn’t matter which era of Wonder Woman was your favorite – DC Direct had a toy for you! 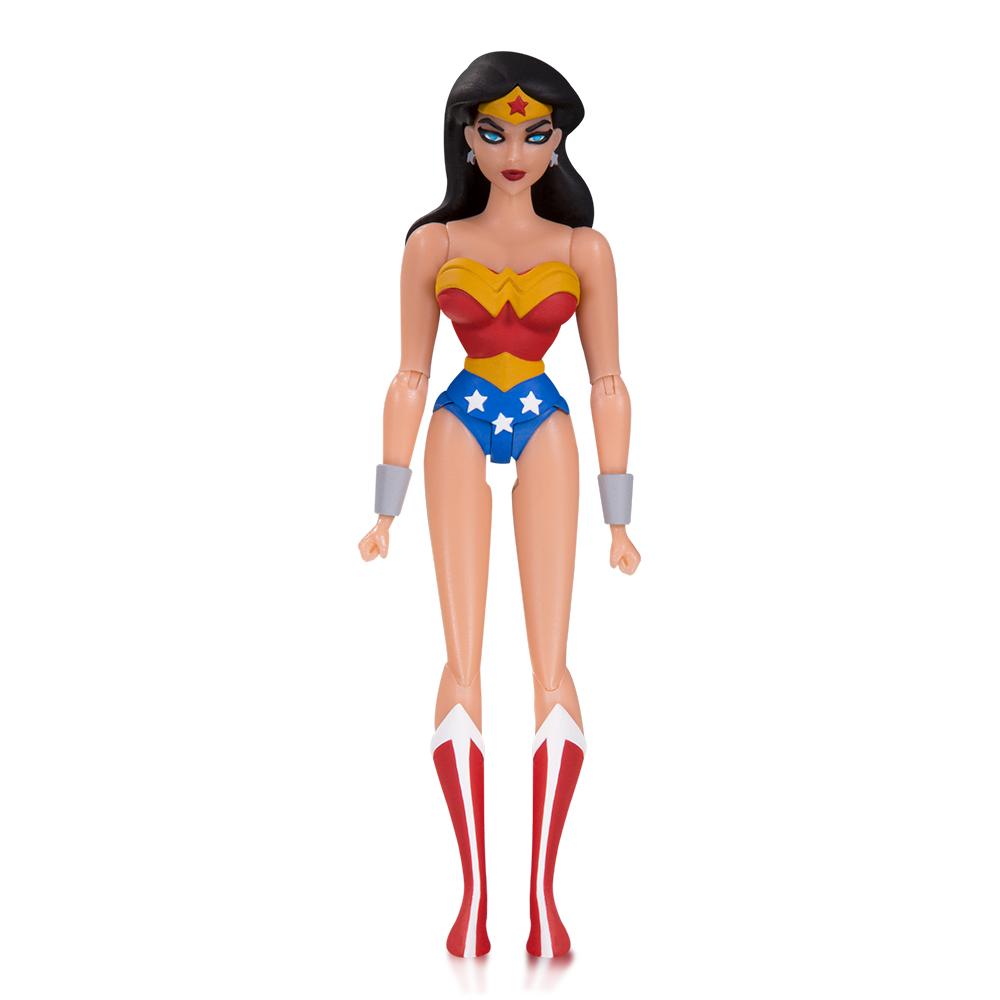 Shameless plug time... If any of this is giving you the urge to buy a Wonder Woman figure, be sure to check out the member-exclusive 6-inch Wondy figure in our DC Universe Shop. Relased in 2018, this Amazonian action toy is modeled after voice actress superstar Susan Eisenberg’s Wonder Woman from the 2001 Justice League animated series. If you’re worried about Diana being lonely, you can also purchase a set with all 8 of the League members featured in the show's first iconic season. Do whatever you want with these figures. Make Wonder Woman beat up Batman. She can take him. 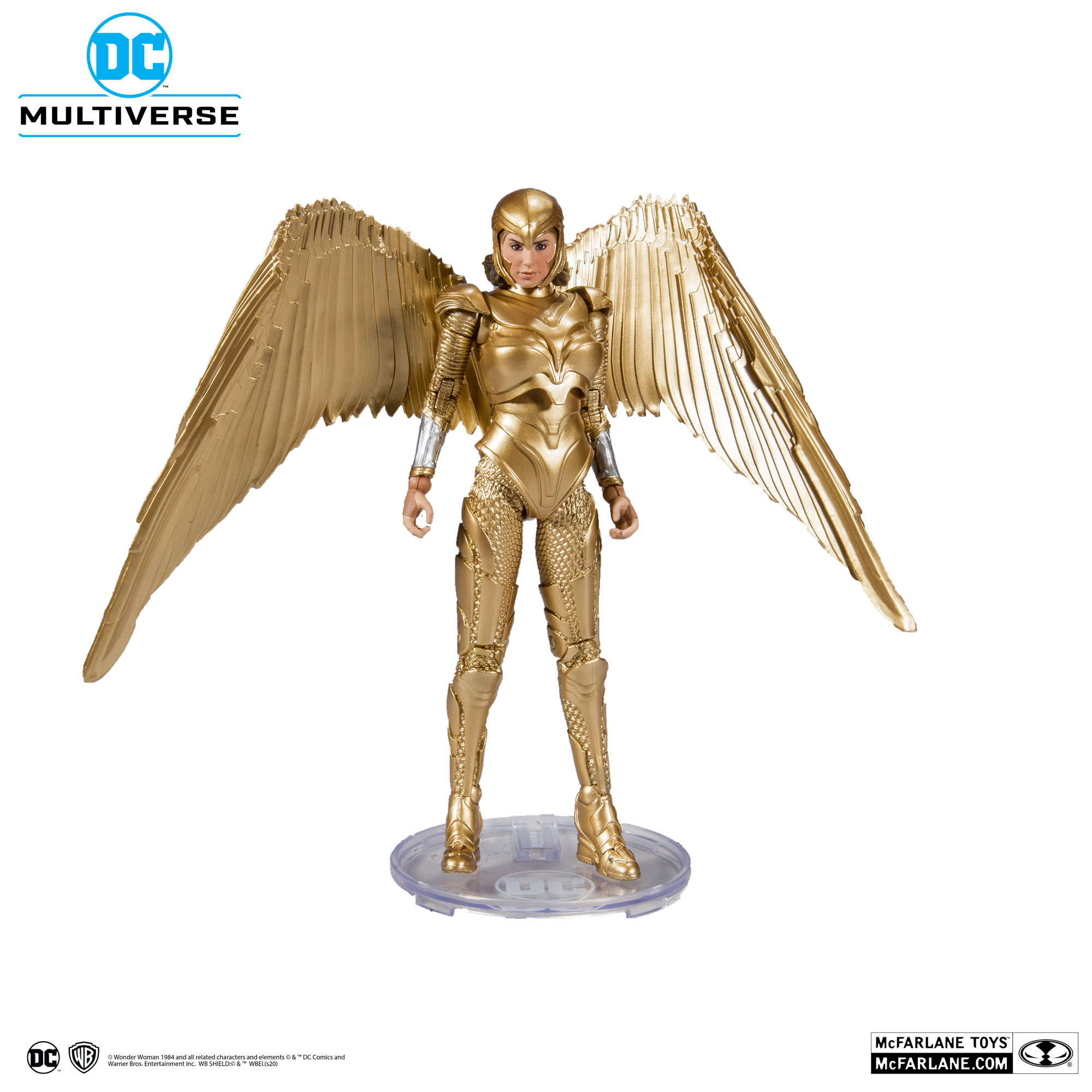 We know what’s on the mind of most Wonder Woman fans these days – Wonder Woman 1984! The upcoming sequel to director Patty Jenkins 2017 blockbuster can’t get here fast enough, and we’re already marveling at some of the outfits Diana has worn in the film's promotional material. Thanks to the McFarlane Toys DC Multiverse line, fans can bring home a taste of Wonder Woman 1984 while they await its release. One of the line's figures features Diana in her new Golden Eagle Armor, and it is GLORIOUS. Pictured above, it even comes with detachable wings. McFarlane has also released a figure of Wonder Woman in the traditional costume we’ll see Gal Gadot wear once more in the movie. This figure’s armor shines, as Wonder Woman stands poised with her lasso ready to combat an enemy. Is it Cheetah? Maxwell Lord? When it’s your toy, it can be anyone you want. 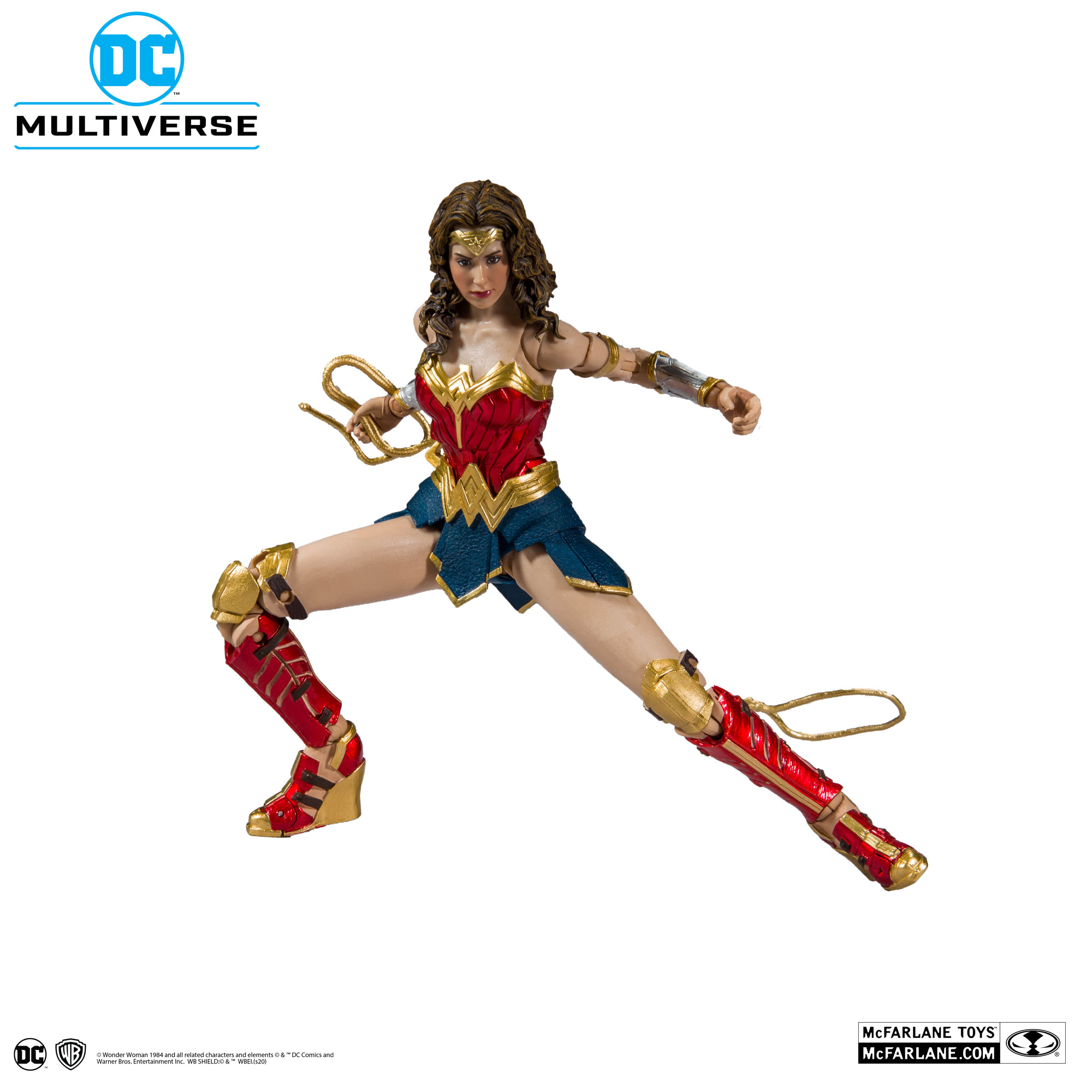 From Ideal to Mego, from Kenner to DC Direct, and now McFarlane Toys, Wonder Woman has a grand legacy of dynamic action figures. Although some of them are more detailed than others, these toys are an important part of Diana's legacy throughout the years. They've allowed Wonder Woman’s adventures to continue outside of comics, television, and movies. Whether you’re a collector who keeps their figures on the shelf, or someone who loves to create their own stories, Diana’s toys continue to bring their own sense of wonder to everyone.

Show off your Wonder Woman collection in our Community!