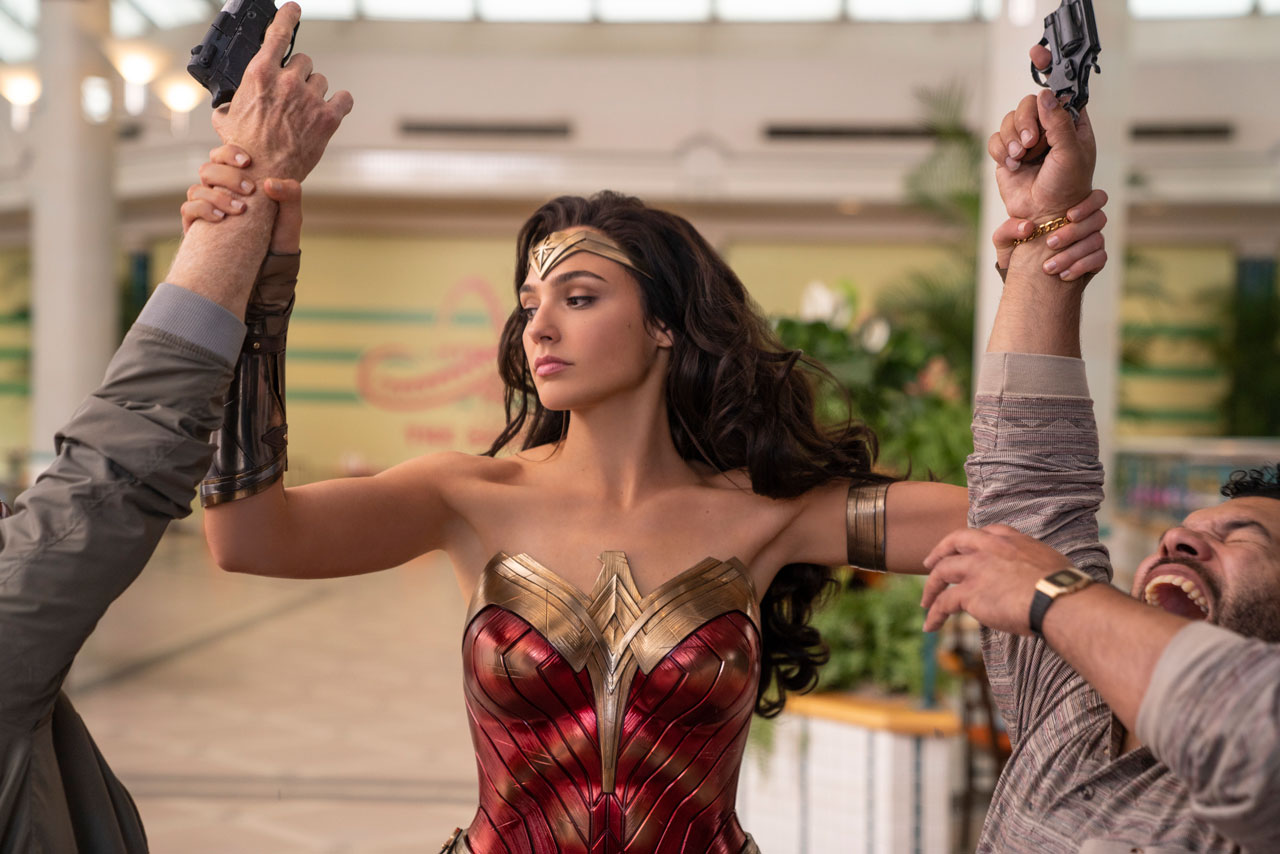 The first lady of superheroism is poised to take us back to the 1980s in Wonder Woman 1984. In the DC film universe, Princess Diana has been active since 1917. But here in the real world, she’s been just as busy since 1941. So when we next see Wonder Woman on screen, how close will it be to the Wonder Woman we knew in the actual 1984? To find out, let’s turn back the calendar some 36 years, and take a look at 12 months in the life of Wonder Woman... 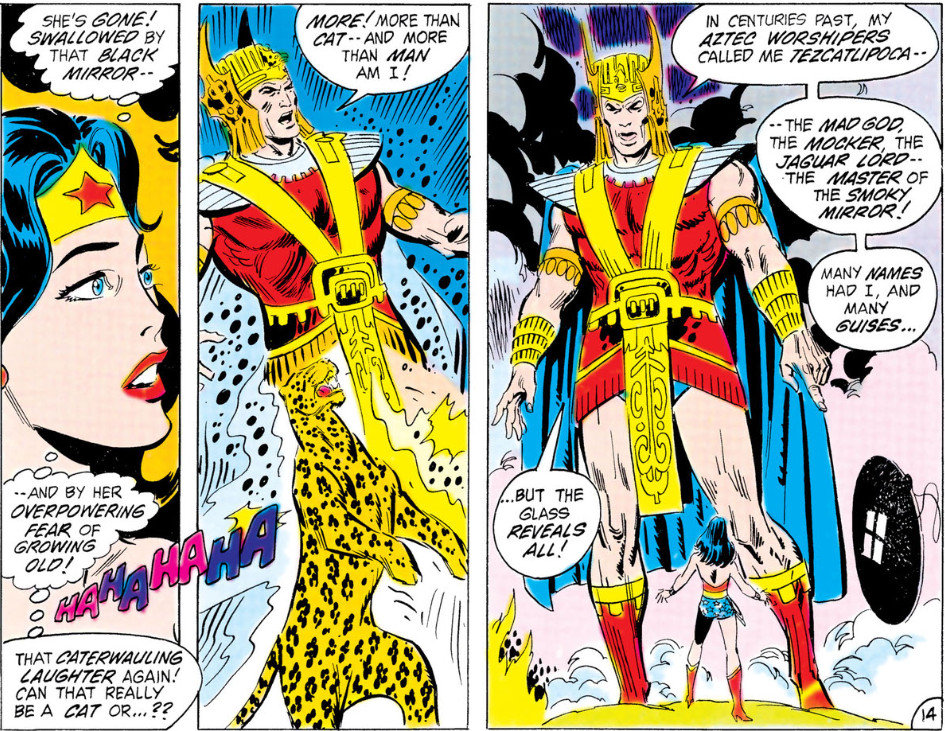 In 1984, the skies were just beginning to take their crimson hue. It was the final full year before CRISIS ON INFINITE EARTHS would clear the decks, and The Monitor had just begun to test the mettle of the world’s heroes for the upcoming armageddon. In this time, though, that infinity of Earths which defined Silver Age continuity was very much still in play. What this means is that throughout 1984, there were not one, but two significant Wonder Women depicted in the Multiverse: Earth-One’s battler of the gods, and Earth-Two’s Nazi-fighting champion of the All-Star Squadron. We’ll be focusing on the Earth-One incarnation, because those Earth-Two stories are set in the 1940s--and this is all about seeing what Wonder Woman was up to in ‘84.

To start the year off, Wonder Woman came face to face for the first time with one of the greatest enemies she would confront before the Crisis: the Aztec god of kings and warriors, Tezcatlipoca (WONDER WOMAN #314). Years later, Tezcatlipoca would play a significant role in the backstory of Aztek, and would later still be resurrected for a team-up arc between Aztek and Wonder Woman by Steve Orlando in the Rebirth era. 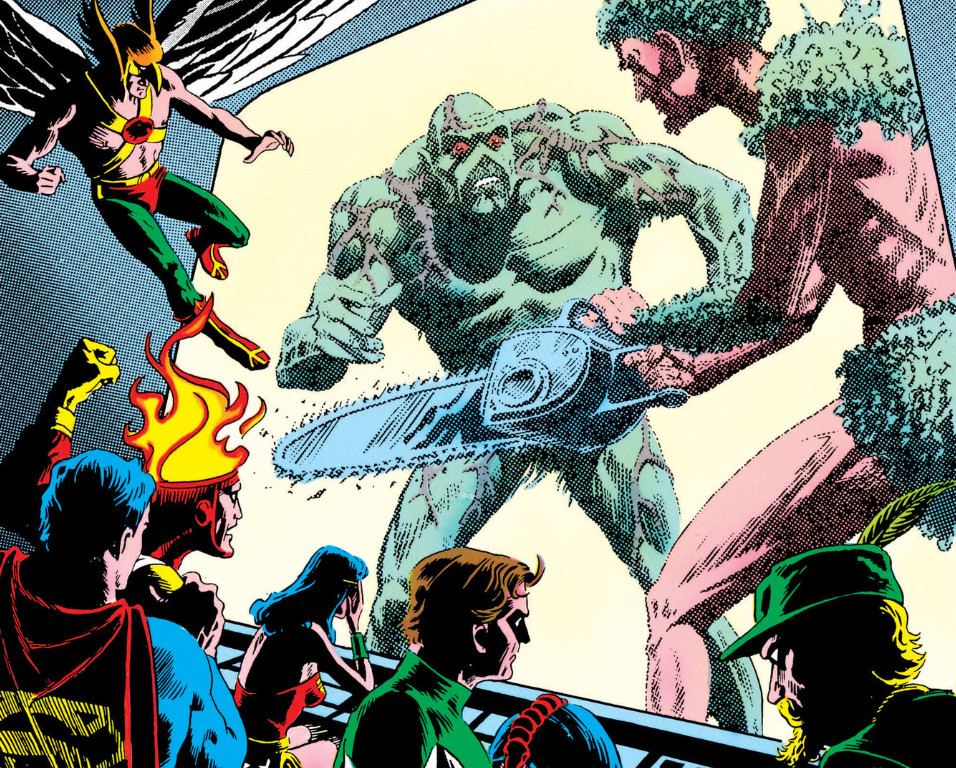 Wonder Woman and the rest of the Justice League were forced into the sidelines when the first major storyline of Alan Moore’s SAGA OF THE SWAMP THING came to a head, and could only watch as Swamp Thing battled Floronic Man for the fate of the Earth (SAGA OF THE SWAMP THING #24). Though Swamp Thing won the day, Wonder Woman would be rendered just as helpless when Tezcatlipoca stripped her of her powers, just as she had been once before during writer Denny O’Neil’s run in the seventies (WONDER WOMAN #315). 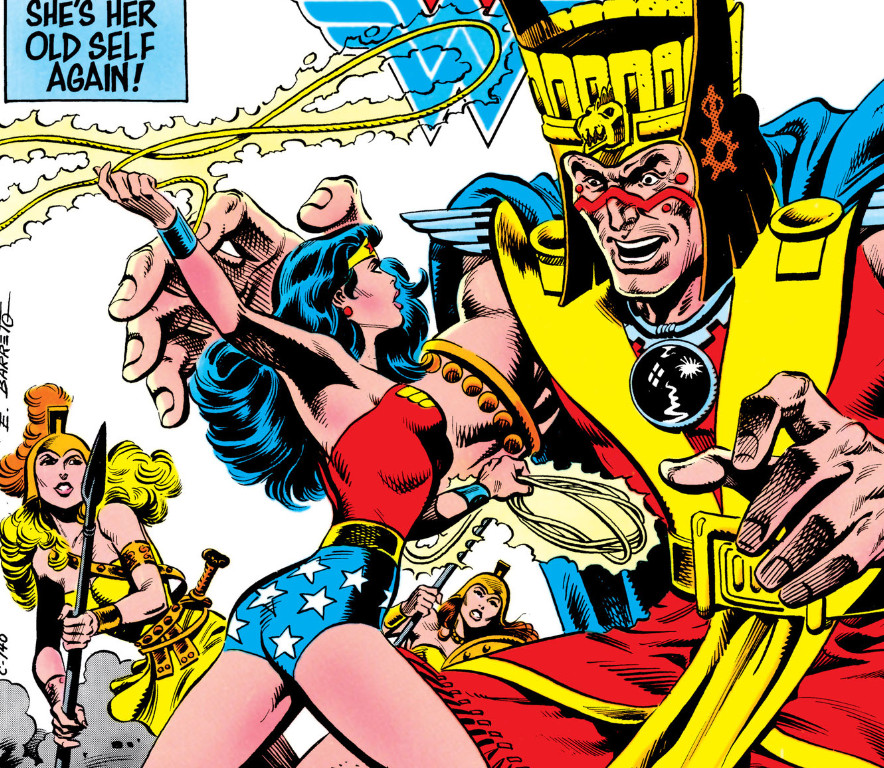 Unlike those seventies stories, though, Diana would regain her powers in the very next issue, driving Tezcatlipoca from dominating the Amazon tribe of South America (WONDER WOMAN #316). Let it not be said that DC didn’t learn not to take the “Wonder” away from “Wonder Woman.” 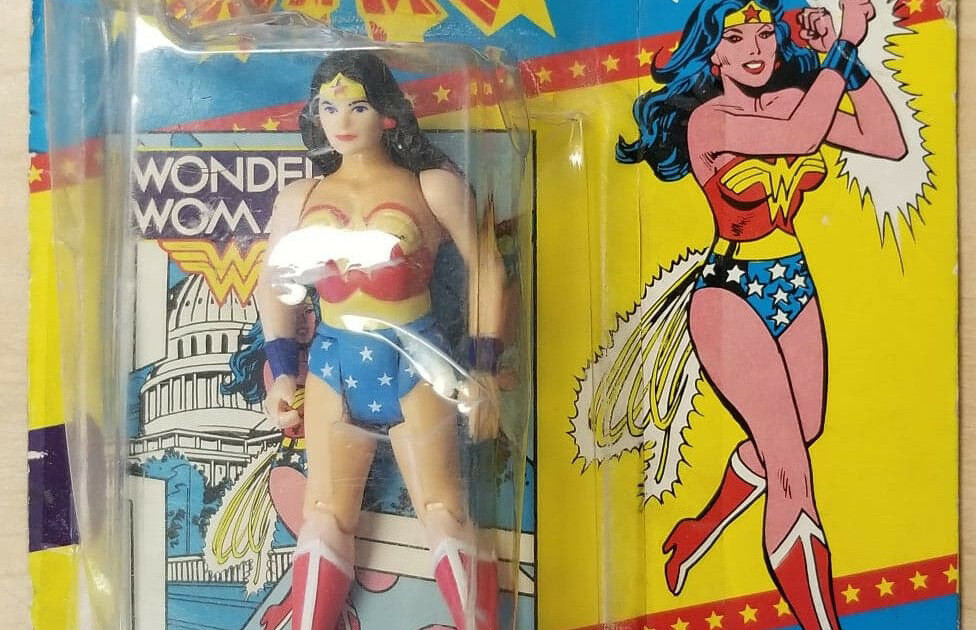 The second quarter of 1984 kicked off in a big way for Wonder Woman, and indeed all her fellow “Super Friends.” Kenner Toys released the first wave of its 1/16th scale of “Super Powers Collection” action figures, including a 4.5 inch Wonder Woman who was articulated to deflect projectiles with her magic bracelets. For cross-promotion, DC launched a line of SUPER POWERS tie-in comics to feature the characters who would be showcased in the toy line… and got none other than the great Jack Kirby to write and draw the five issue miniseries himself, which would prove successful enough to garner two sequels in the years to come. These comics are significant as the only time that Kirby himself would ever pitch the forces of Darkseid against the heroes of the Justice League. Concerning Wonder Woman, the first issue has Darkseid’s “Emissaries of Doom” enlist Brainiac in reawakening the warrior instincts of the Amazons to sew chaos on Themyscira (SUPER POWERS #1). Meanwhile, on Earth-One, Wonder Woman enjoys her victory over Tezcatlipoca as Atalanta, queen of the South American Amazons, shares more about her people (WONDER WOMAN #317). 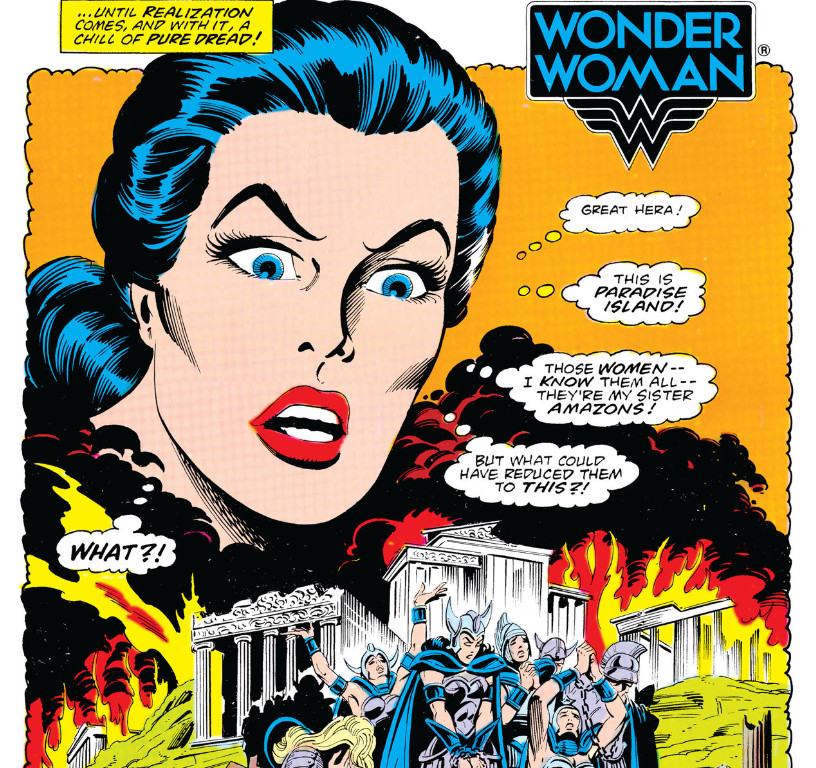 While the Wonder Woman of Jack Kirby’s SUPER POWERS struggles on Paradise Island, Earth-One’s Wonder Woman must save a Themyscira of her own when she’s transported by Aphrodite to the distant 63rd century, to liberate her people from hostile occupation by a race of mutant pig-men (WONDER WOMAN #318).

On a... happier? note, once returned to the present, Diana and Hippolyta gave Donna Troy their blessing for her to marry history professor Terry Long (honestly a bad move, IMO). (TALES OF THE TEEN TITANS #45) 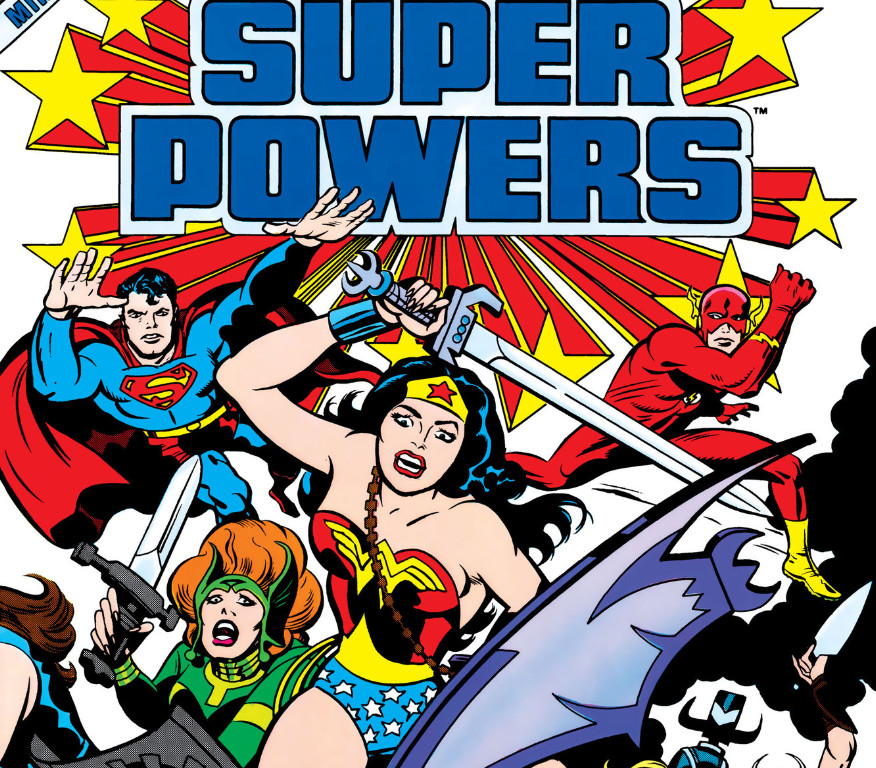 Remember AMAZONS ATTACK? Well, 23 years before that story, Jack Kirby had the Amazons declare war on Man’s world in SUPER POWERS #3. Led by a Brainiac-brainwashed Diana, the Amazon warriors take over the missile base of the island nation of San Marcos, intending to move onto America next. When the Justice League arrives to interfere, Brainiac shifts his focus back to Superman, freeing the Amazons from his control... and regressing the Man of Steel into a brutal caveman, who uses his super strength against the League. Back in Pre-Crisis continuity though, Wonder Woman is stopping  a war rather than starting  one--as her enemy Dr. Cyber, disguised as Diana Prince, steals US nuclear launch codes (WONDER WOMAN #319). 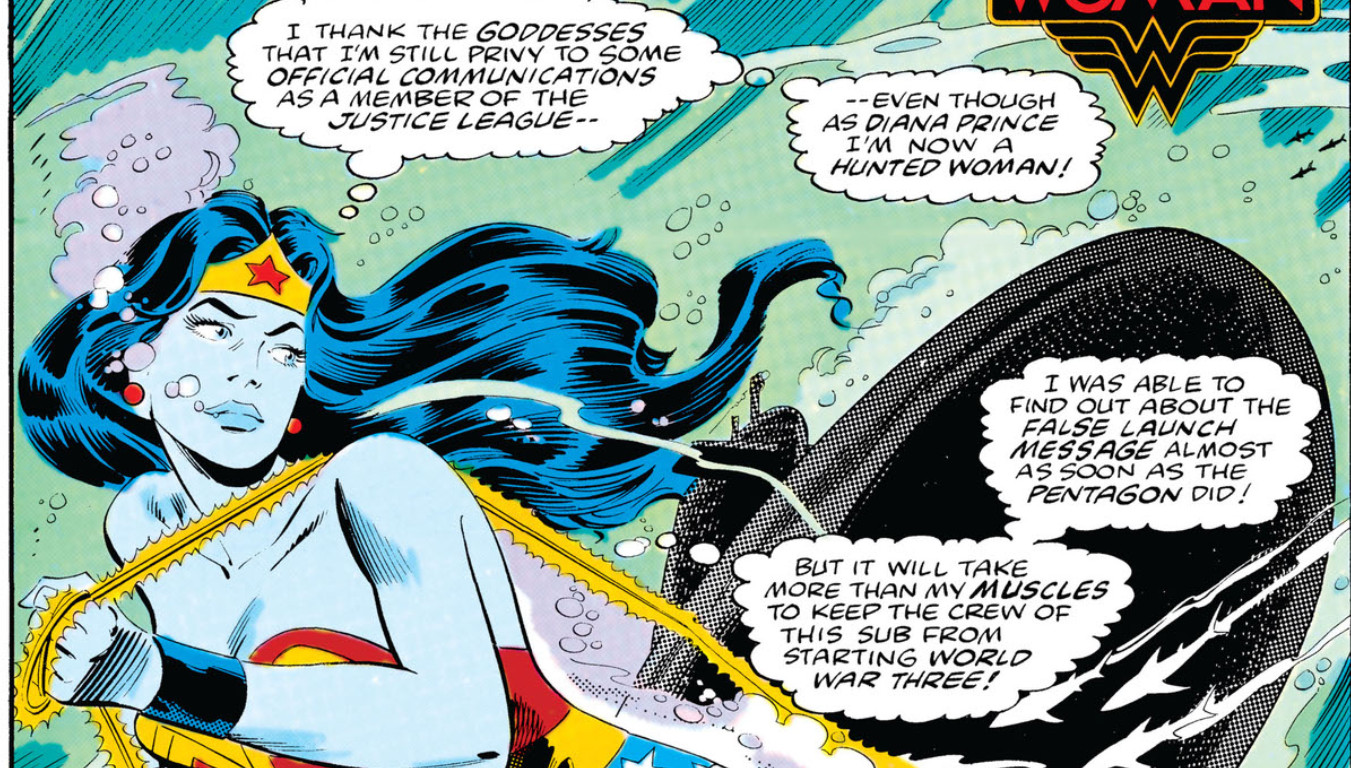 A secret identity comes in handy sometimes, as a Dr. Cyber-framed Diana Prince is wanted for betraying the country while Wonder Woman works to stop Dr. Cyber’s designs on World War Three (WONDER WOMAN #320). But that’s not the only attack on America that the Amazon champion will be involved in this month: in JUSTICE LEAGUE OF AMERICA #231, Wonder Woman joins the remaining Justice Leaguers who haven’t been transported to Earth-Two in the wake of the preceding “Earth-Mars War” in protecting the Pentagon from an attack by mythological beasts. Meanwhile, in SUPER POWERS #4, Green Lantern breaks through to the devolved Superman, and Wonder Woman joins the League in an attack on the Emissaries of Doom and their allies--only for the team to be stranded on Apokolips itself without a Boom Tube while Darkseid readies his invasion of Earth. 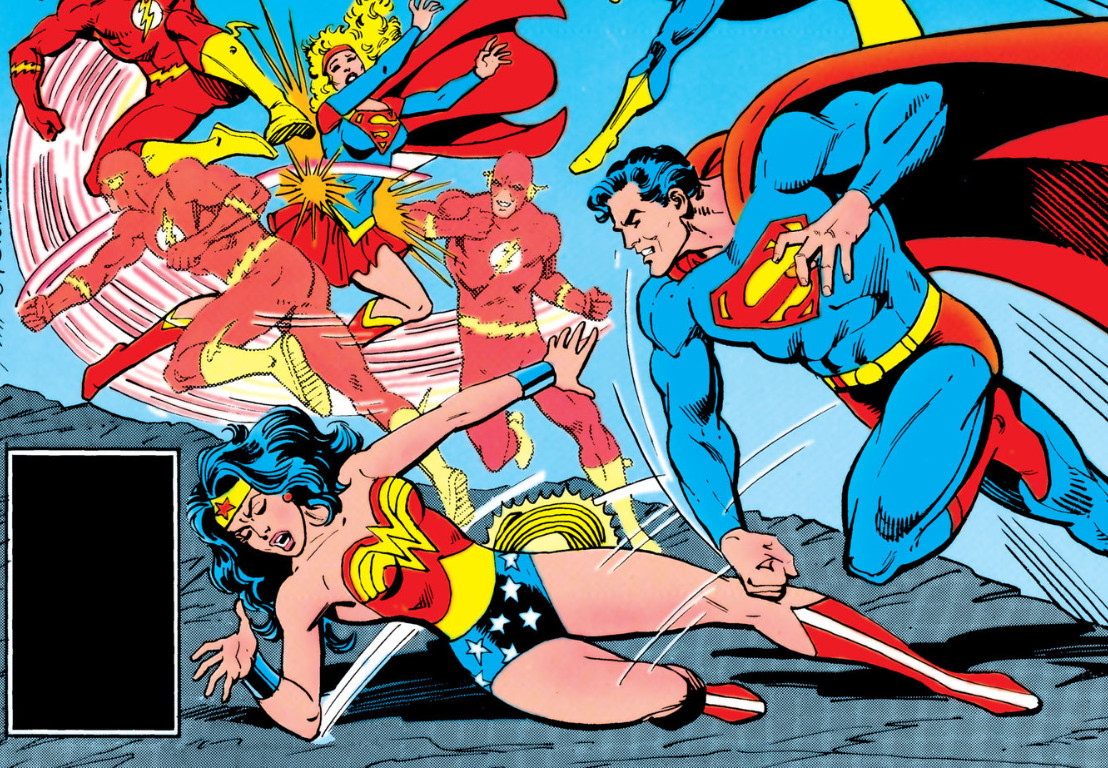 Okay, so that’s the Wonder Woman of Earth-Two on the cover you see above of JUSTICE LEAGUE OF AMERICA #232 who’s getting whacked by Superman. Half of Earth-One’s Justice League fell under the control of the villainous Commander, who fought against Earth-Two’s Justice Society (including the Golden Age Wonder Woman). In the meantime, Earth-One’s Wonder Woman is joined by the Greek god Eros in her ongoing battle against Dr. Cyber, who gets a little too overzealous in his involvement of man’s affairs (WONDER WOMAN #321). Finally, the first chapter of Jack Kirby’s SUPER POWERS comes to a close in issue five, where Wonder Woman and her Justice League cohorts find unlikely allies in Joker, Penguin, Brainiac, and Lex Luthor for stopping Darkseid’s global conquest. But just as one promotional effort for Kenner’s Super Powers toy line ended, another was about to begin… 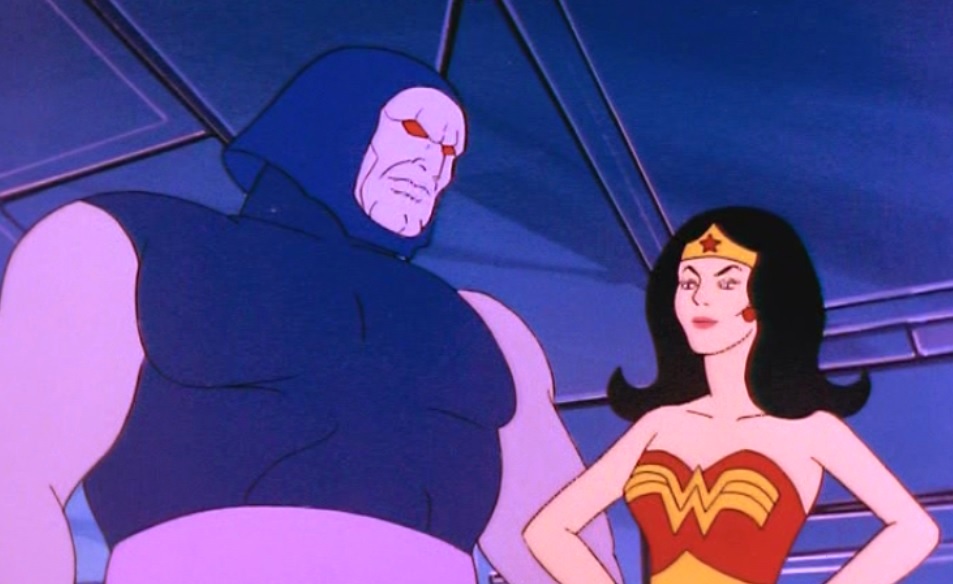 September of 1984 was the beginning of the 8th and penultimate season of Super Friends, now bearing the full title of Super Friends: The Legendary Super Powers Show--all to better reflect the associated Kenner toy line. Just as the preceding SUPER POWERS comic series pitched the Justice League against Darkseid, so too would DC’s own God of Evil make his on-screen debut in this season premiere. In “Bride of Darkseid,” the Lord of Apokolips sets his sights on forcing Wonder Woman to rule by his side by any means necessary while he spread his interplanetary conquest, a peculiar motivation which would play out through the rest of the season.

Meanwhile, back in the comics, a long brewing storyline since long before 1984 comes to a head as Wonder Woman learns that her mother and Eros had both been tampering with her memories and perception of Steve Trevor (WONDER WOMAN #322). But at least Diana still has family she can count on, as she helps her sister Donna prepare for her impending nuptials in TALES OF THE TEEN TITANS #49. But Diana is truly taken to task when, alongside Superman, she is tested for the first time by the behind-the-scenes machinations of The Monitor in DC COMICS PRESENTS #76. It truly must be September, because The Fall has arrived. 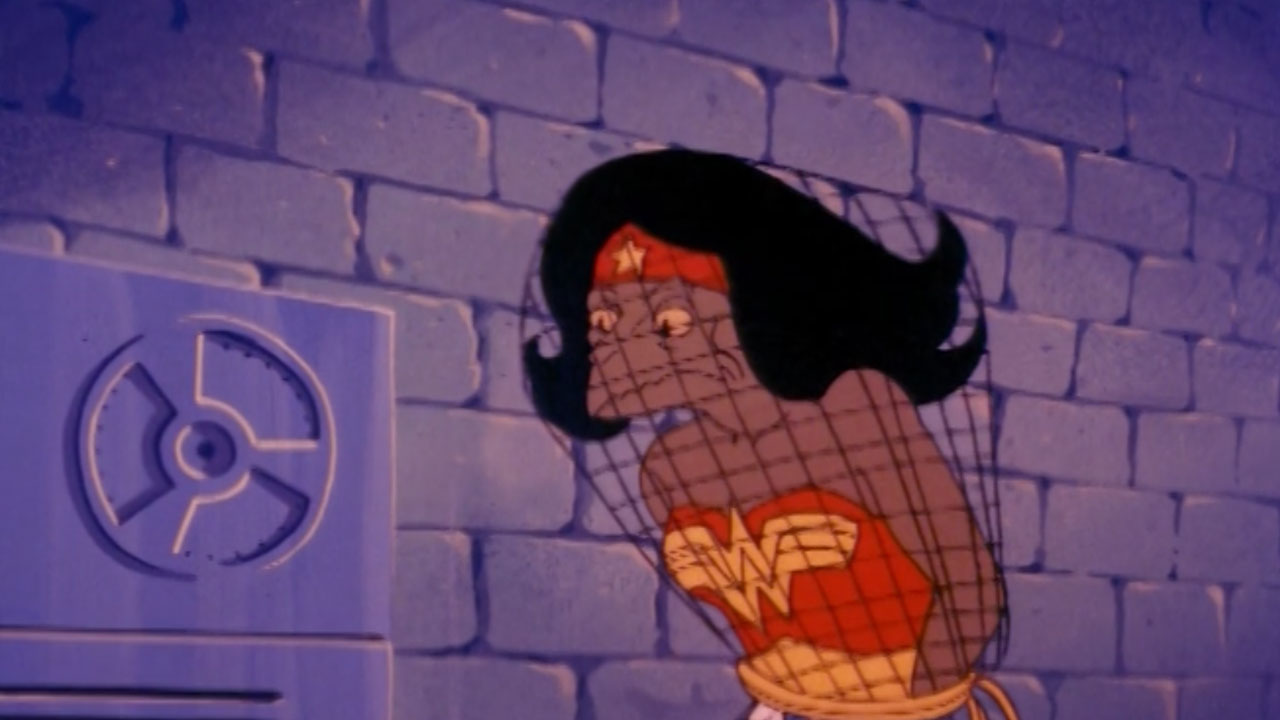 October 1984 was a fallow month for Wonder Woman comics, but not one without Amazon content. The back half of Super Friends: The Legendary Super Powers Team aired during this time, bringing the promotional season for the first wave of Kenner Super Powers Collection action figures to a close. In these episodes, Wonder Woman was captured by Darkseid (again), transformed into a “Dinosoid” (above), and fights the Wonder Twins in their final Super Friends appearance after they get mind-controlled by Brainiac. 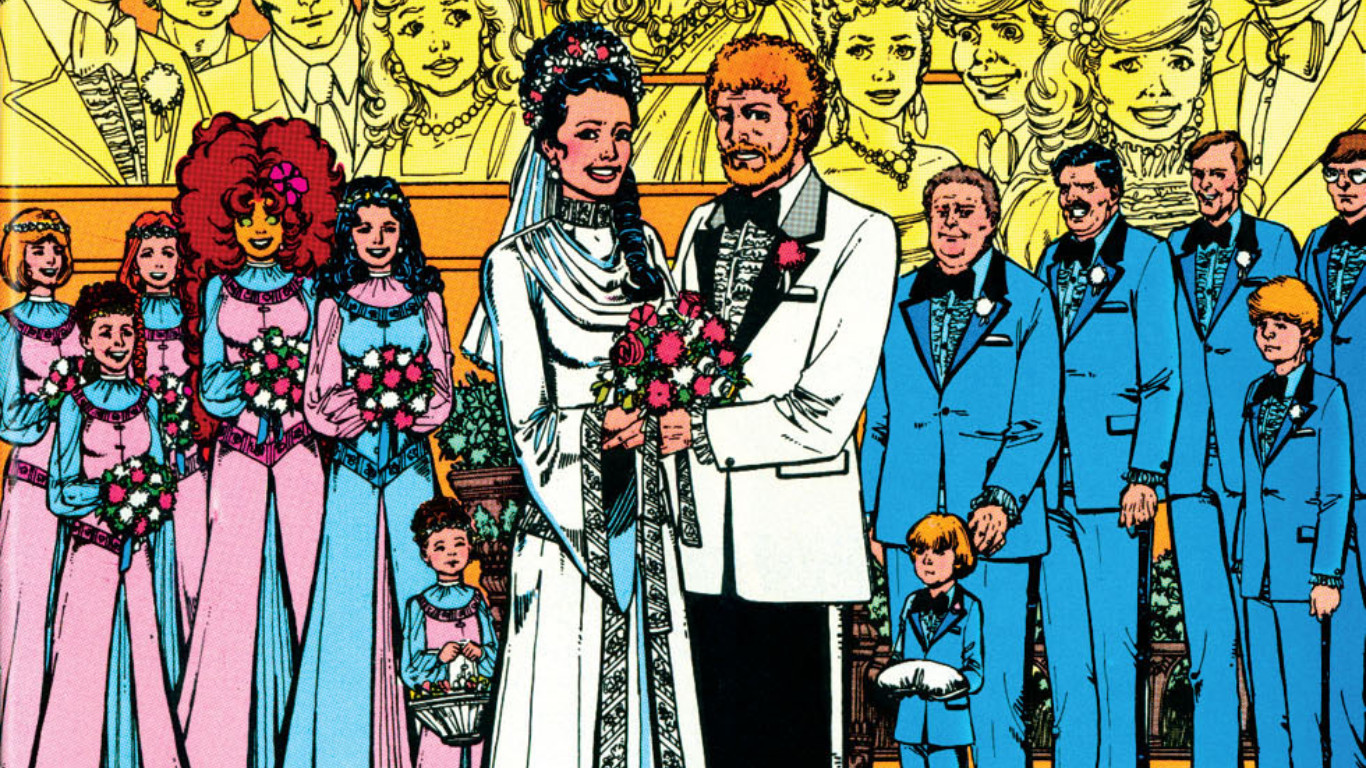 The Wonder Wedding of the decade arrives, as Donna Troy ties the knot with Terry Long in TALES OF THE TEEN TITANS #50. Diana, of course, holds the position of Donna Troy’s Maid of Honor… though later storylines would suggest post facto that Starfire held that role instead. Who can say, really? To be fair, Wonder Woman has other things on her mind, as her enemies Cheetah and Doctor Psycho are out cutting deals with the mysterious Monitor, continuing in his capacity to test Wonder Woman for the war to come (WONDER WOMAN #323). 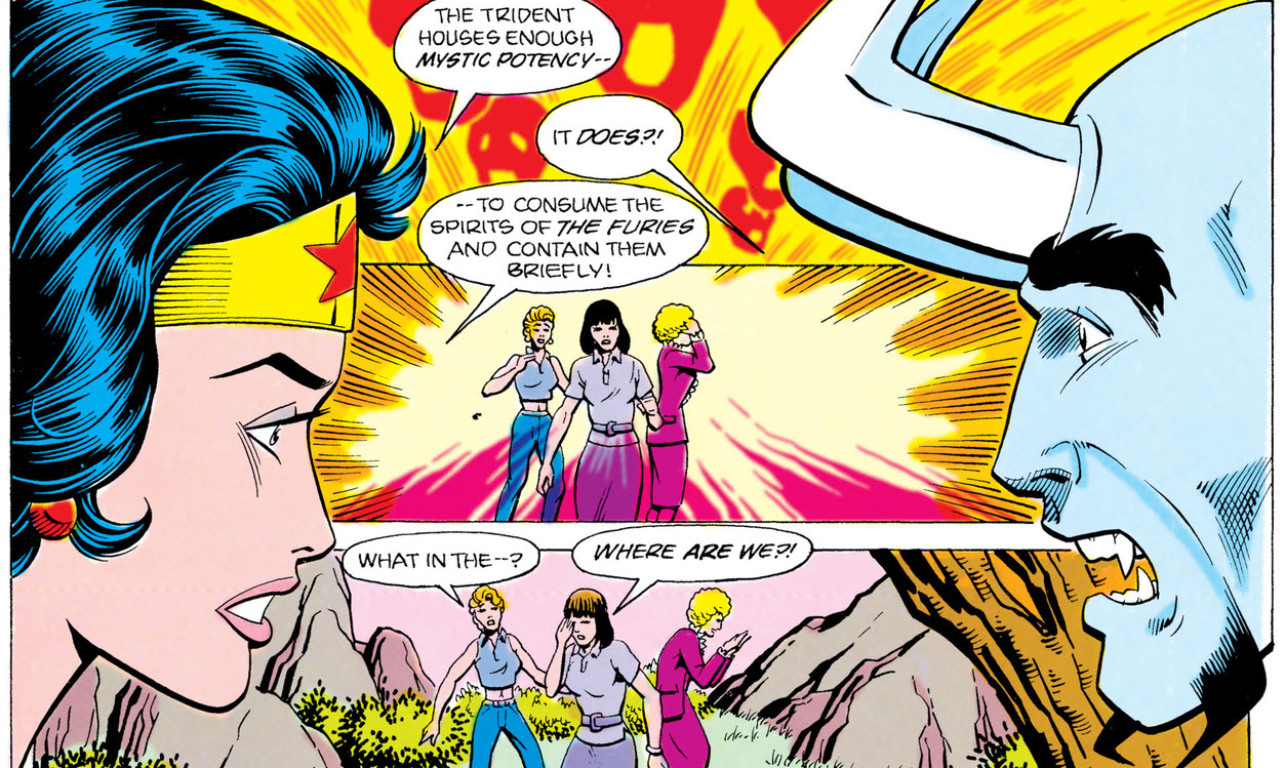 Early December is always a busy time of year as we try to head off the holiday rush, and that’s as true for Wonder Woman as it is for any of us. In ACTION COMICS #565, Diana has to contend with a pushy Ambush Bug, a fourth wall-pushing character whose whole deal I do NOT have time to get into, who wheedles her in vain for a guest spot in his own nascent solo comic book series. But the busy heroine does have time to endorse Donna Troy and the Teen Titans, after their tireless work to head off yet another potential world-ending threat at the hands of Trigon (THE NEW TEEN TITANS #6). But Wonder Woman has her work cut out for her when she not only must contend with the Furies of ancient myth, but must join forces with new-hero-on-the-block Blue Devil in order to do so (BLUE DEVIL #10).

And that brings us into 1985! So, with all that in mind, what have we learned about Wonder Woman 1984 and its relationship to where Wonder Woman was at the time? Well, unless we’re in store for a surprise Darkseid appearance where he attempts to make Gal Gadot his bride, or Tezcatlipoca makes an unexpected appearance in the Cheetah’s backstory… it doesn’t seem like much. But if this writer may opine, the true significance of the number 1984 is what immediately comes after it--1985, the year that comics entered what is widely recognized as the “modern” era. 1984 is the final year of nostalgia before CRISIS ON INFINITE EARTHS sets in. One last time where the DC Universe can afford to look back before it must forge boldly forward ever more for continued survival. Whatever the future holds for the Woman of Wonder after this, it won’t be in the past.

Are you in an ‘80s kind of mood? Tell us about your favorite DC stories from the Me Decade in our Community!