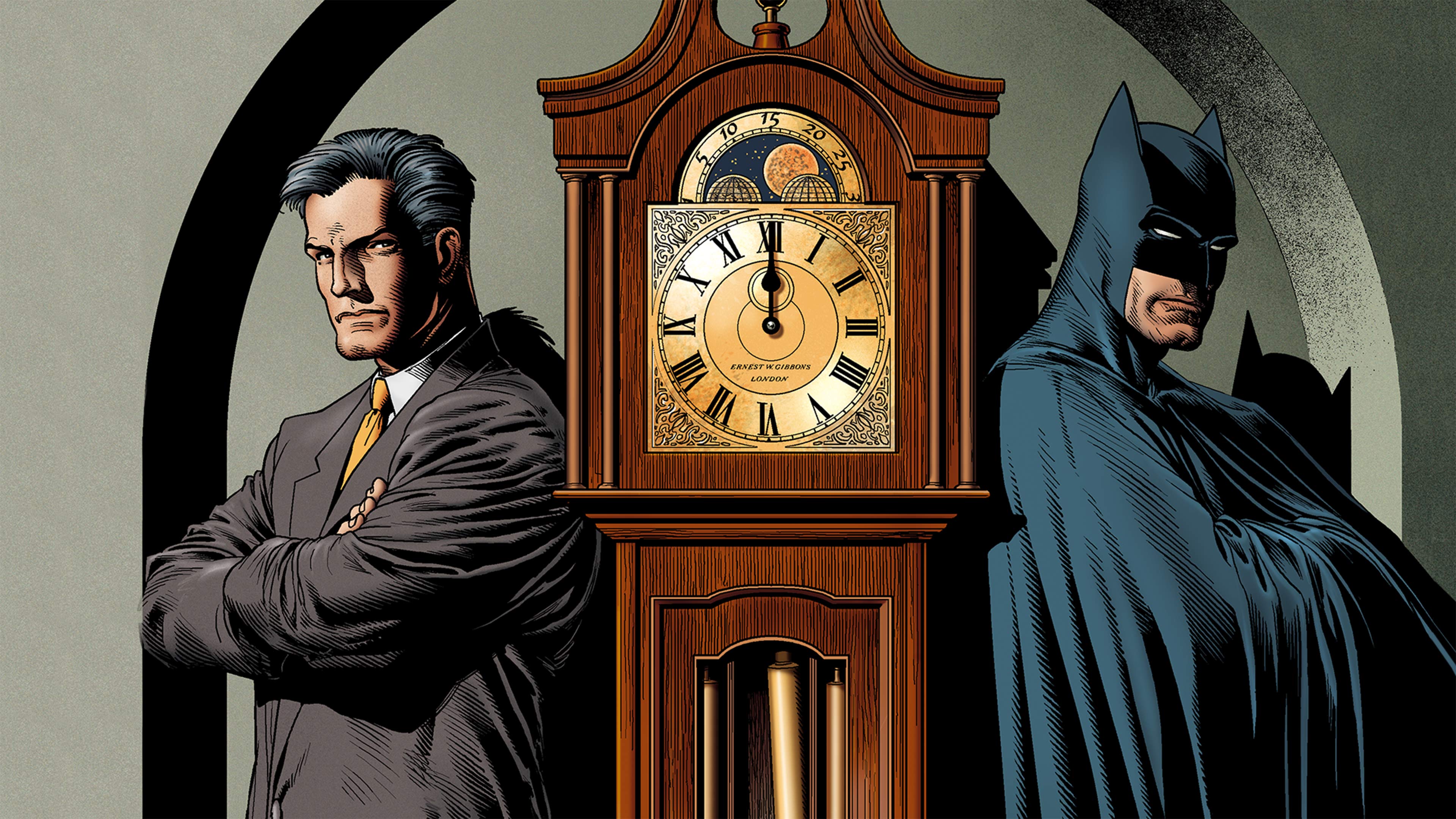 What Does Bruce Wayne Do When He Isn’t Batman?

The Batman is a creature of the night. From his first appearance to his most popular media incarnations, the Caped Crusader primarily operates after hours when crime is at its highest in Gotham City. But during the daytime Bruce Wayne is as a businessman, entrepreneur and philanthropist. But the way that's been portrayed has varied dramatically over the years. Let's take a look...

Over the course of Batman’s history, many stories have shown how Bruce Wayne occupies his time when the sun is out. As one of the wealthiest men in the country, Wayne’s greatest luxury is how he’s never really held to any standard to make many appearances that truly require his time. He could well become a recluse and only appear at night as the Batman if he truly desired. This was a warning Alfred gave to him at the start of writer Grant Morrison’s run in Batman #655. 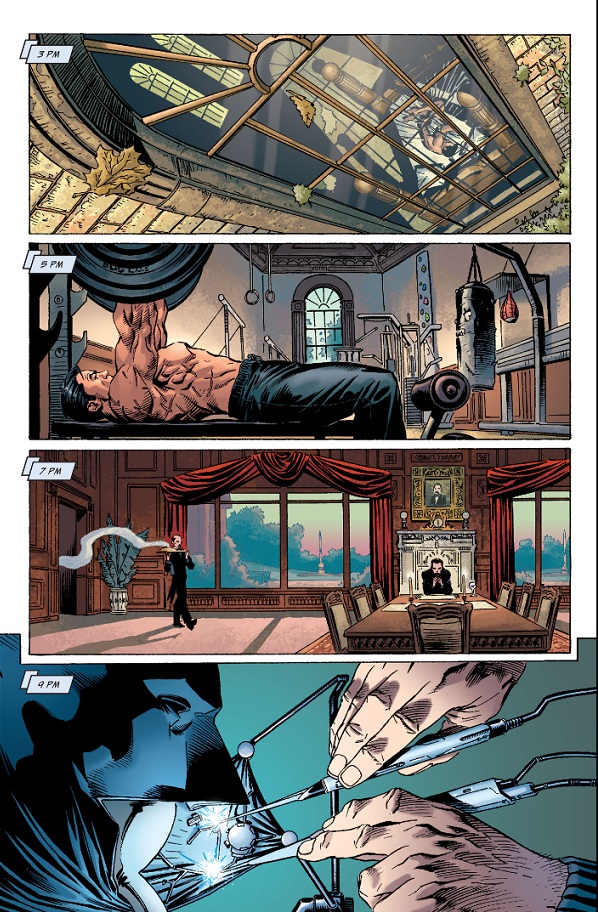 Yet it’s the use of his time and energy when he’s not Batman that keeps Bruce’s interests philanthropic and honorable. Often times Bruce is seen at evening dinner parties chatting up debutantes and supermodels just before a supervillain crashes the party. A notable example is from Batman #181 where he and Dick Grayson attended a “Pop Art Show” at Gotham City Museum, just before they witnessed the supervillain premiere of Poison Ivy. 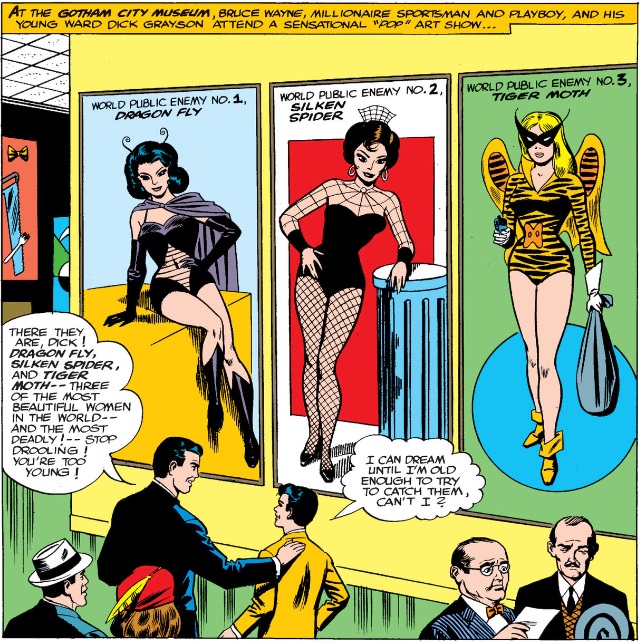 Other times he finds himself at the right place at the right time to bump into a costumed acquaintance, like in Batman #15. In this issue, Bruce is a judge at a Beauty Contest.

Other times, Bruce is the prize for a charity date, like in the Batman: The Animated Series episode “The Cat and the Claw”, which also featured Catwoman. 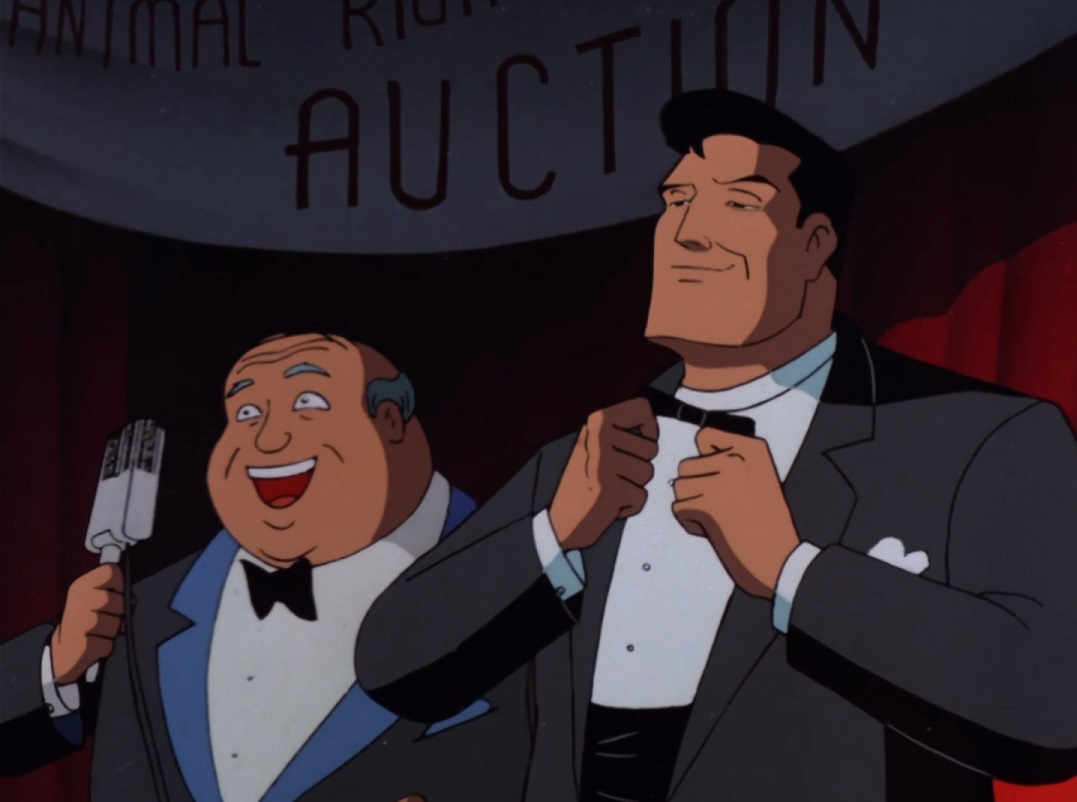 At least this example was for the sake of charity. Other times you’d think Bruce would have better things to do in the evenings. It’s often shown that he uses the many differing Gotham locales to his educational advantage when investigating a case, such as in episodes like “On Leather Wings” or “Vendetta” where he publicly visits the Zoo.

Similar scenes can be found in the pre-internet days of the comics, like in Detective Comics #571 where he and Robin visited the race track. Jason had to be reminded that their investigation was not for fun. 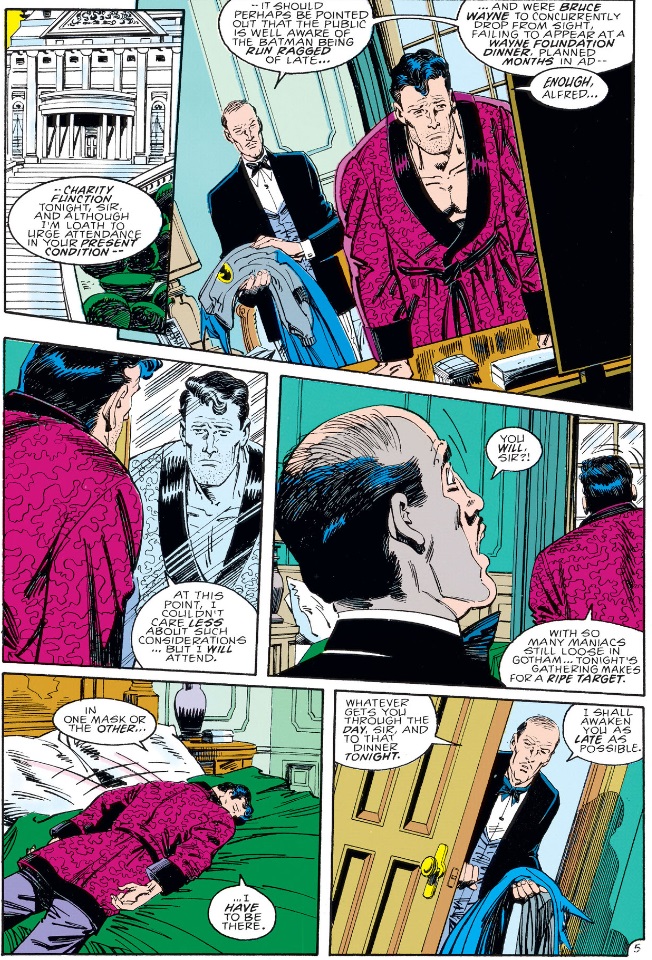 This obsession to use his public persona to aid his war on crime can get him in trouble. During "Knightfall" in Batman #495, Bruce was beyond his physical limits and could barely get out of bed. Yet he made sure to attend a Wayne Charity Function on the off chance that one of Gotham’s famous criminals would attack it. Sure enough, his hunch paid off. That brought him no comfort, as all he wanted to do was stay in bed. 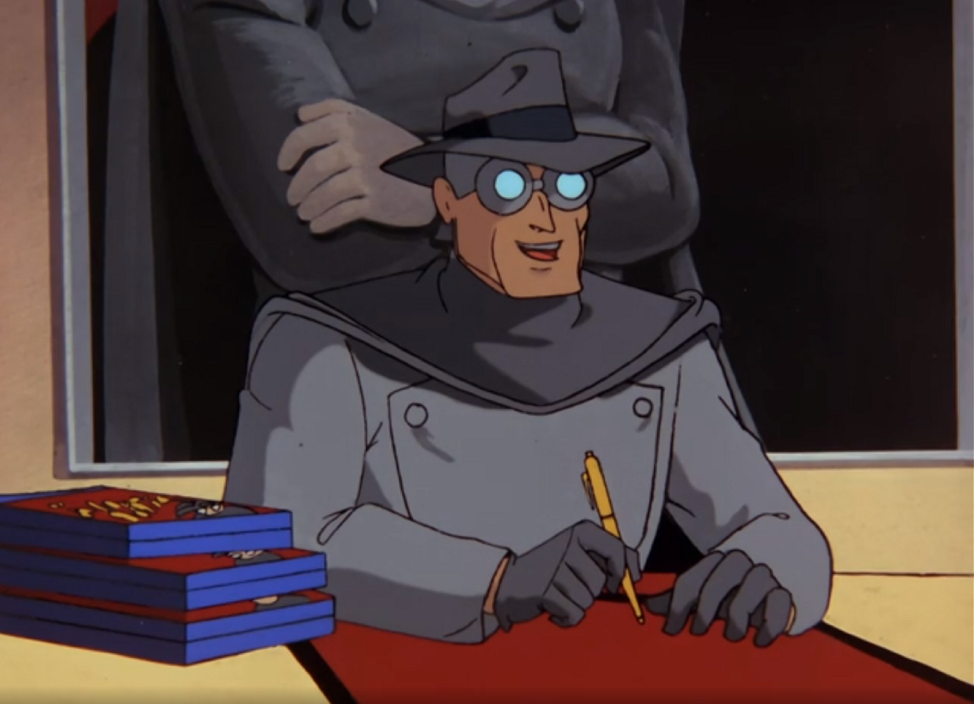 But not every daytime appearance is solely for the mission of Batman. Sometimes Bruce is just as human as any of us. In the BTAS episode “Beware the Gray Ghost,”, Bruce attends a celebrity meet-and-greet with the actor of his childhood hero (voiced by Adam West.) While it might be odd to see Batman stan a celebrity, as fans we can all relate to meeting a special someone who was foundational in forming our fandoms. 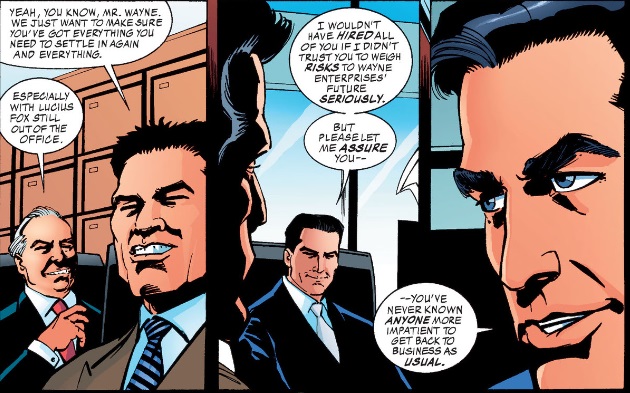 Other times, Bruce’s daytime schedule isn’t exactly indulgent, but it’s still productive. To date the most coherent and detailed depiction of his workday comes in the form of Batman: Gotham Knights #32. Titled “24/7”, this issue shows Bruce Wayne’s day from 8:00 a.m. to 5:00 a.m., displaying his business routine, charity ventures and recreational time, as well as the effect both Wayne and Batman have on the people of Gotham. Written by Devin Grayson and illustrated by Roger Robinson, the story came after the year-long storyline Bruce Wayne: Fugitive, where Bruce was wanted for murder. As he returns to work, his stockholders assure him that he’ll be kept abreast of everything that goes on with his company. 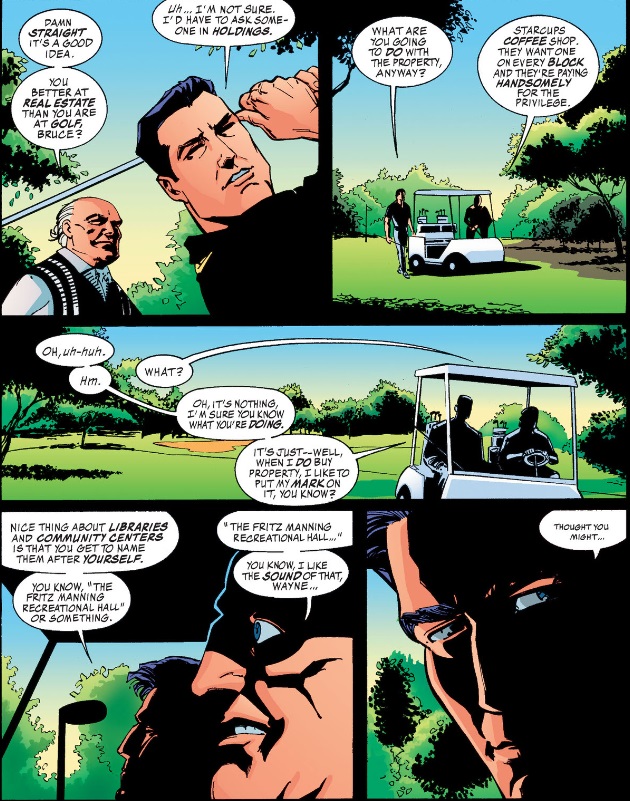 Throughout the day we see Bruce interact with his staff, making sure everything goes according to his wishes. He doesn’t really “work” per-say, as we never see Bruce sit down at a desk and work on anything. He tours his office building, showing his face and patting various backs with grinning approval. We also see his charitable side. While running into a young college-bound intern he offers the boy a Wayne Enterprises scholarship on the condition that he works for WE after graduation. He spends $1,200 on lunch for Gotham’s Elderly. He dedicates a newly sculpted statue to law enforcement in memory of the events of No Man’s Land. With each scene, people see different sides of Bruce that they’ve come to know on their own. Some people believe he’s all talk and can’t relate to the common worker. Bruce uses this to his advantage in one mid-afternoon golf session with another businessman. While the old rich guy sought to buy up land to make a coffee shop, Bruce turned his brain around towards building a new library, as long as the man kept his name on the title for the promotional credit. 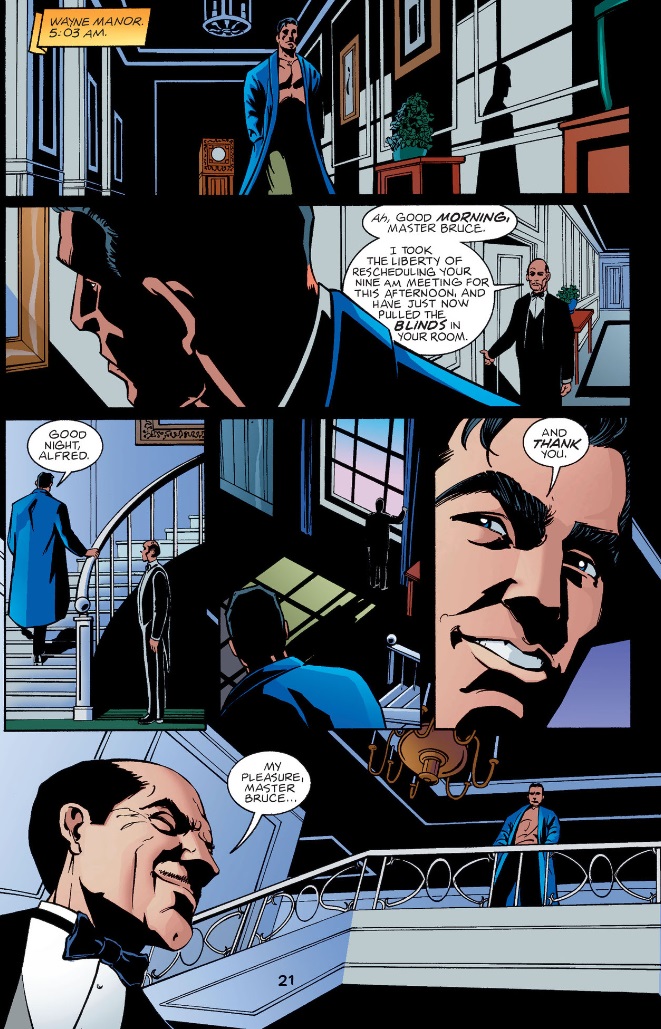 He visits Lucius Fox’s family as the Wayne Industries VP was hospitalized at the time, and donates new body armor and bulletproof vests for the Bludhaven Police Department (Dick Grayson worked there as a cop.) Once the evening rolls around he clocks in as Batman, patrolling the city as usual and finds the city generally safe thanks to his efforts, both as Batman and as Bruce Wayne. He returns home satisfied with the productivity of both day and night.

There are hundreds more Batman stories where, eventually, Bruce Wayne is sure to be shown having a slow evening or an eventful workday. These stories feed the imagination and help conjure the character as fully fleshed out and three dimensional, giving the impression that there’s always more to him than what tends to be shown on-screen or on the page.

What would YOU do in your free time if you had Bruce Wayne's money? Let us know in our Community!