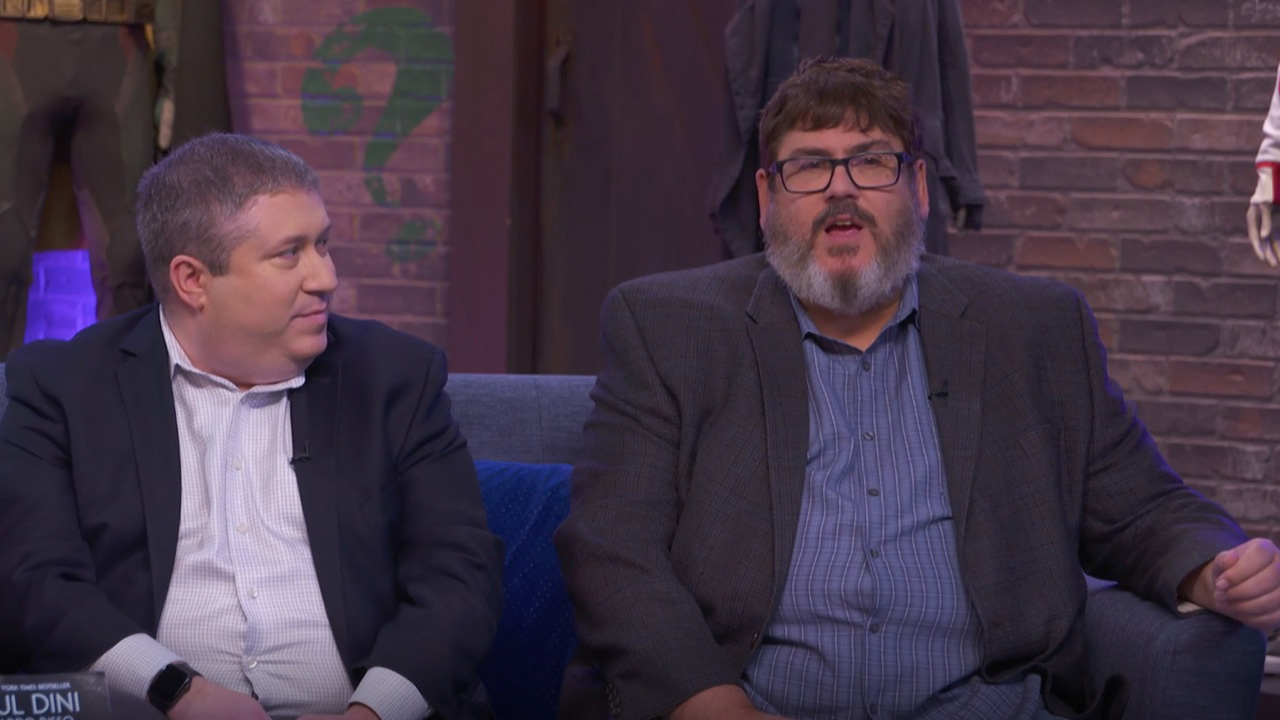 This Week on DC DAILY: A Visit from Paul Dini

Have you been watching DC Daily? Every day the show bring fans great discussions, special guest stars and fun surprises! This week featured visits from writers Paul Dini and Steve Orlando, along with the nerdiest debates this side of Metropolis. Here are some of the highlights…

On Monday, February 25th, Hector Navarro gave viewers a breakdown on who’s who in the new Doom Patrol series. Hector followed this up with a new feature called “Hector Guarantee," where he recommends a piece of content on the DC Universe service. His first recommendation was the 2004 animated series The Batman. Have you checked it out yet? Next, the DC Daily panel (John Kourounis, Hector Navarro, and Markeia McCarty) were joined by writer Paul Dini and Seth Everett from the Hall of Justice podcast to discuss the New Batman Adventures episode “Holiday Knights”. Paul gave the panel some insight into the transition between Batman: The Animated Series and The New Batman Adventures, and why Tim Drake was chosen to be the second Robin instead of Jason Todd.

On Tuesday, February 26th, DC Daily presented a feature on John Stewart’s greatest moments. Afterwards, the DC Daily panel (Sam Humphries, Hector Navarro, John Kourounis, and Whitney Moore) continued their look at Forever Evil with their book club segment. The book's surprise appearance by Alexander Luthor definitely got a reaction from the panel. “I did a spit take," said Whitney, while Hector thought it was Jimmy Olsen. After a discussion about the real Lex learning Batman’s secret, the crew debated which member of the panel is the most evil.

On Wednesday, February 27th, John Kourounis sat down for a chat with Steve Orlando to  talk Martian Manhunter. Steve let us know what’s coming up for J’onn and gave us some insight into what drives our favorite Martian. “No matter how dark his soul felt, he’d find a way back to the light. He found a way to heroism. He became the Martian Manhunter," Steve said. Next, the DC Daily panel (Sam Humphries, Hector Navarro, Markeia McCarty, Samm Levine, and Amy Dallen) chatted about Doom Patrol #25. The gang also shared some comments from our Community. If you participated, check it out -- because your comment may have been featured! The discussion was every bit as psychedelic as the comic, and even featured a giant whale swimming through the DC Daily set... Hey, strange things happen when you read a Doom Patrol comic!

On Thursday, February 28th, the DC Daily panel (Clarke Wolfe, Sam Humphries, Samm Levine, Hector Navarro, and Markeia McCarty) had an in-depth chat about Doom Patrol episode 2, “Donkey Patrol”. When Cyborg was announced as a cast member for the series, there were debates about whether he truly belonged on the team, so naturally the panel tackled that talking point. If you’re still doubting Vic’s place on the Doom Patrol, check out this discussion... The gang also addressed the twisted mindscape torture Mr. Nobody inflicted on the team, and the poor fate of the show's donkey.

On Friday, March 1st, the DC Daily panel (Clarke Wolfe, Markeia McCarty, Sam Humphries, Hector Navarro, and John Kourounis) broke down this week’s biggest news items. The panel discussed Amanda Waller’s confrontation with Superman in Action Comics #1008, and the breakdown of The Flash’s friendship with Batman during the conclusion of “The Price" storyline. The gang was wowed by the Gotham episode “Ace Chemicals”, and how it tied into the origin of The Joker. Speaking of The Joker, DC Daily presented a feature on the Clown Prince of Crime’s first appearance in Batman #1. This led to Clarke wondering who among her co-hosts was most like The Joker. To Hector’s chagrin, everyone immediately pointed a finger at him. Ouch! Do you agree?

If you missed out on any of this fun, don’t worry, because DC Daily steams everyday right here on DC Universe; bringing exclusive bits of fandom fun curated especially for you. So make sure you see what the gang is up to next week. After all, you never know who might stop by the couch!

What’s your favorite DC Daily segment? Let us know in our Community!