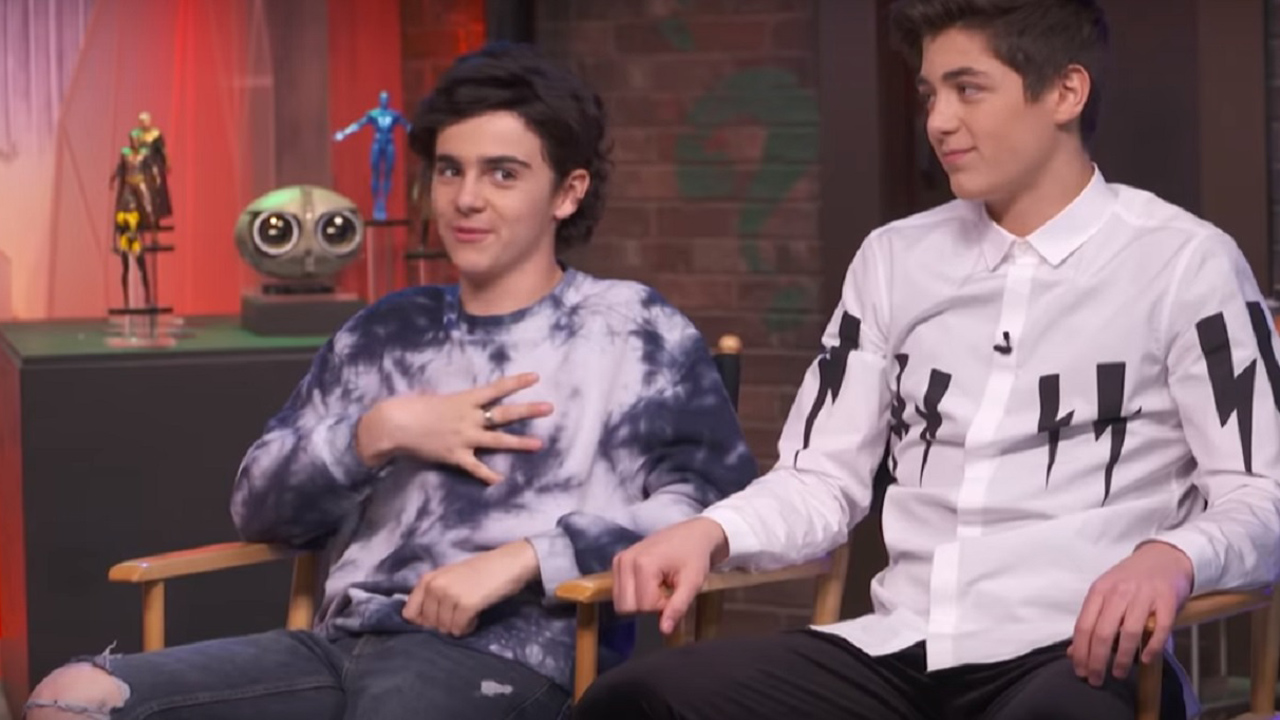 This Week on DC DAILY: More Fun with the SHAZAM! Cast!

It was another fun week on DC Daily. Each episode contained exclusive bits of fandom fun, including on-set secrets from the cast of the blockbuster Shazam! film, comic-book teases from writer Brian Michael Bendis, and lots more! Here are the week's highlights...

On Monday April 8th, the DC Daily panel (Clarke Wolfe, Hector Navarro, Sam Humphries, Harley Quinn Smith, and Samm Levine) sat down to give their thoughts on the Young Justice: Outsiders episode “Rescue Op”. The gang absolutely loved baby Damian’s cameo, but didn’t dig the way Dick tried to sideline Brion. Next, John Kourounis had a chat with actor Michael Gray, who played Billy Baston in the live-action Shazam! television series. The 1970s show has been cleaned up and remastered for DC Universe subscribers, and Michael was amazed with what he saw. “I watched a few episodes and I’m very impressed. The clarity is very amazing," he told John. In case you’re wondering, Michael doesn’t know what happened to Billy Batson's Winnebago, but he hopes he can find it one day... Afterwards, the DC Daily panel returned to talk about the Krypton pilot, which led to some shipping discussions. Who do you think the panel wanted Seg-El to end up with -- Nyssa-Vex or Lyta Zod? Watch their chat to find out.

On Tuesday April 9th, the DC Daily panel (John Barrowman, Amy Dallen, John Kourounis, Sam Humphries, Samm Levine, and Whitney Moore) sat down to talk about the first 2 chapters of the 2017 comics event Dark Knights: Metal. The story raised an interesting question: does Batman always know best? After pondering that point, the gang showed their love for baby Darkseid. Next, John Kourounis sat down for a chat with Shazam! film stars Jack Dylan Grazer (Freddy Freeman) and Asher Angel (Billy Baston). John asked the duo where Shazam would be if he didn’t have Freddy in his life, and Jack answered, “Stuck in a dumpster somewhere or dead." “Eating rats,” Asher added. The teens also told John about the epic prank war they had on set. Afterwards, the DC Daily panel returned to cover the 1997 film Batman & Robin. The movie wasn't a box-office sensation, but the panel was able to find the fun and enjoy themselves. Check out their conversation and you might find a new appreciation for this Batman film.

On Wednesday April 10th, the DC Daily panel (Hector Navarro, Amy Dallen, Markeia McCarty, John Kourounis, Harley Quinn Smith, and Whitney Moore) discussed the animated movie Batman: Bad Blood. They gang loved the Dark Knight’s allies and debated who was a better one -- Batwoman or Batwing? Next, Catwoman writer-artist Joelle Jones told fans what to expect during the next phase of her run on the book. “I think from here I definitely want to dig in more with her sister Maggie," Joelle said. Afterwards the DC Daily Book Club (Sam Humphries, John Kourounis, Samm Levine, Hector Navarro, Amy Dallen, and Whitney Moore) gave their thoughts on the final chapters of Batman: Hush. Now that the mastermind has been revealed, do previous chapters make sense? Did the story wrap up satisfactorily? The Book Club pondered all.

On Thursday April 12th, the DC Daily panel (Markeia McCarty, Clarke Wolfe, Sam Humphries, and John Kourounis) tried to make sense of all the strangeness in the Doom Patrol episode “Danny Patrol”. A lot went down on Danny the Street, and the gang loved every minute of it. Inspired by Larry’s show-stopping performance, the panel shared their own karaoke stories. Speaking of Doom Patrol, fans were treated to a behind-the-scenes featurette with the cast talking about what’s driving each of their characters. Afterwards, Sam Humphries interviewed writer Brian Michael Bendis about his Jinxworld imprint. Bendis has been writing Jinxworld since college, and the universe is now reaching brand new heights as a DC Comics specialty imprint.

On Friday April 13th, the DC Daily panel (Markeia McCarty, Harley Quinn Smith, Clarke Wolfe, Amy Dallen, Whitney Moore, Hector Navarro, and John Kourounis) gave their spoiler-filled thoughts on the Shazam! movie. If you want to know what the gang thought of the final act's surprise, the post-credits scene and more, check out this captivating discussion. Next, Sam Humphries continued his interview with Brian Michael Bendis, this time covering his Wonder Comics imprint. Bendis revealed that from the moment he signed onto DC, fans had been requesting Conner Kent’s return. Now that he's back, Bendis plans to take full advantage of the Young Justice roster, with plenty of surprises ahead. He promises fans that all their questions, like where Stephanie Brown is, will be answered soon. Check out the rest of the interview for more insight.

If you missed out on any of the fun, don’t forget DC Daily is available to stream right here on DC Universe. The gang has more surprises in store for you, so make sure you watch next week to see what they’re up to. After all, you never know who might stop by the couch!