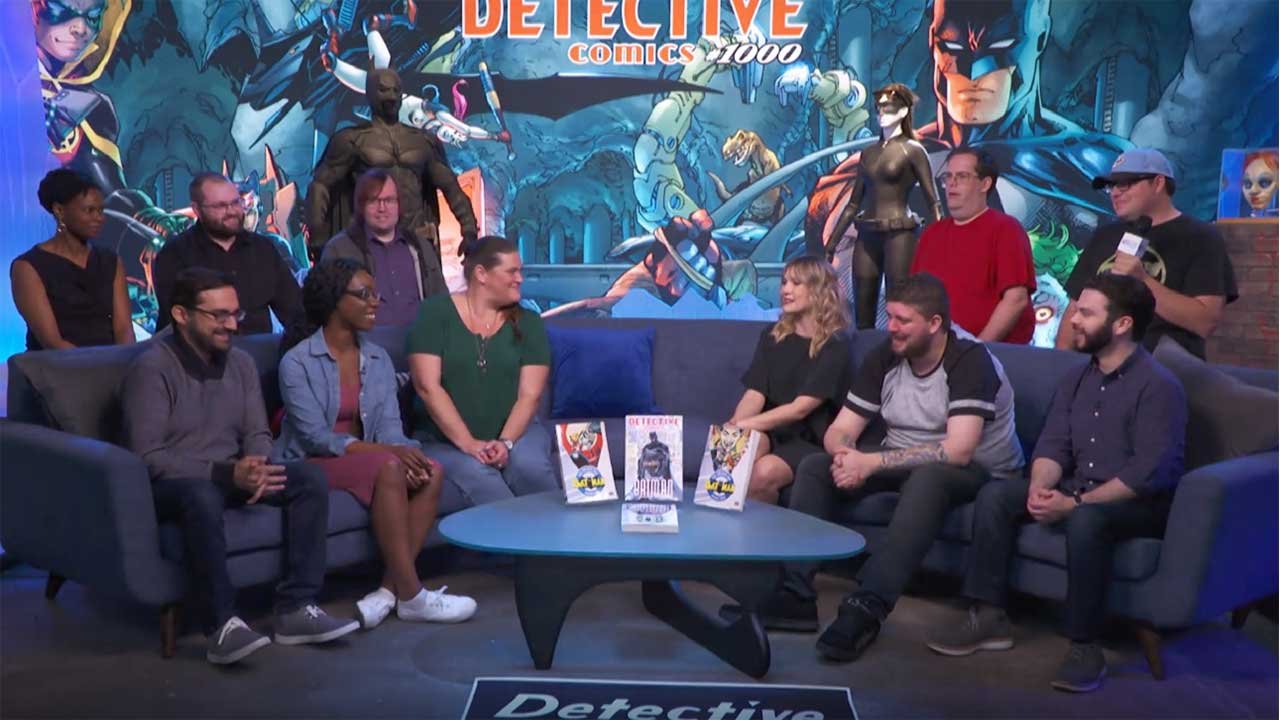 This Week on DC DAILY: DC Universe Fans Take Over!

Did you catch DC Daily this past week? We hope so, otherwise you missed some of the coolest bits of exclusive fandom fun this side of Gotham City! This week featured a first for the show: a visit from the folks who make it possible -- the fans! There was a celebration of Detective Comics #1000, and exclusive interviews with creators like Brian Michael Bendis and Kevin Smith. Here are some of the highlights…

On Monday March 25th, DC Daily opened its doors to a select group of DC Universe subscribers for an unforgettable day of fun. We’ve always said, "You never know who might stop by the couch,” and this time it was the fans themselves. Did you recognize any of your fellow Community members? The frequent commenter HubCityQuestion even got a chance to challenge Hector Navarro with some trivia... The DC Daily set was filled with props and vehicles, including a convoy of movie Batmobiles, vintage costumes, and other cool surprises. Burt Ward, the former Boy Wonder himself, even stopped by to say hi! But don't worry if you weren't one of the few folks to attend this event, because when it comes to DC Universe, you never know when the next event will happen...

On Tuesday March 26th, the DC Daily panel (Hector Navarro, Whitney Moore, John Kourounis, Sam Humphries, and Markeia McCarty) gave their thoughts on the Young Justice: Outsiders episode “Private Security.” This episode gave fans their pick of Roy Harpers, and the panel debated who their favorite was. They also pondered if Dr. Fate was an evil person for keeping Zatanna away from her father. Take a listen to what they had to say, you may change your mind... Next, DC Daily presented a mini-featurette on Whiz Comics #1, the first appearance of Shazam! With the movie heading to theaters, now is the perfect time to revisit his original Golden Age origin. Afterwards, the DC Daily panel (John Kourounis, Markeia McCarty, Whitney Moore, Amy Dallen, Clarke Wolfe, Sam Humphries, and Hector Navarro) debated their choices for the next round of Meta Madhouse: Batman’s Vigilantes! The discussions got impassioned, with Amy remarking, “This bracket is too hard.” For Green Arrow vs. Batgirl, the choice was easy for Clarke: “I was only one of these characters for Halloween last year, so I went with Batgirl.”  Amy agreed, “She’s going to outthink him.” Do you agree? Did you vote?

On Wednesday March 27th, the DC Daily panel (Amy Dallen, Sam Humphries, Markeia McCarty, Clarke Wolfe, Whitney Moore, John Kourounis, and Hector Navarro) celebrated the release of Detective Comics #1000 by discussing Batman’s 80-year legacy. “It’s a sobering reminder that this character is going to outlive us all," Hector said. The gang talked about how much the Dark Knight means to them and why he’s endured. Next, John Kourounis sat down with Dan DiDio for another session of DC Nation. Dan gave John the scoop on how Detective Comics #1000 came together. “This is going to be the biggest book this year for us without a doubt," Dan said. Afterwards, Sam Humphries sat down with Brian Michael Bendis to talk about his story in Detective Comics #1000 and his history with the Caped Crusader. Brian revealed that he knew he wanted to participate in this epic anniversary issue from the first night he got hired at DC. The DC Daily Book Club (Amy Dallen, Samm Levine, John Kourounis, Hector Navarro, Sam Humphries, and Whitney Moore) closed out the episode by talking about the next chapters of "Hush". Is it time for the Joker to die? “I don’t want to lose the Joker,” Whitney confessed. Even so, Batman’s confrontation with the Clown Prince led to a spirited debate about the value of the Joker’s life. What are your thoughts?

On Thursday March 28th, the DC Daily panel (Clarke Wolfe, Sam Humphries, Markeia McCarty, and Samm Levine) gave their thoughts on all the revelations that came out of the Doom Patrol episode “Doom Patrol Patrol”. Can we really trust the Chief? “All of his past associates don’t think much of him," Sam reminded us. There was also an interesting comparison between the new team and the old one, with Markeia defending the newbies. “They’re able to get the results,” Markeia said. “They’re not even a team," Sam countered. Who was your favorite? Next, a featurette was screened in which Joivan Wade discussed Victor Stone’s evolution on the series while showing some cool behind-the-scenes footage. Afterwards, Brian Michael Bendis joined Sam Humphries again, this time to talk about his current run on Superman. “I was over-the-moon happy to be writing Superman,” Bendis beamed. There was some good news for fans who've been wondering about the villain Rogal Zaar: “He’s coming back,” Bendis promised. Great news for the fans. Bad news for the Man of Steel!

On Friday March 29th, the DC Daily panel (John Barrowman, John Kourounis, Sam Humphries, Markeia McCarty, Amy Dallen, Samm Levine, Whitney Moore, and Clarke Wolfe) talked about their favorite stories in Detective Comics #1000. The Brian Michael Bendis story featuring the Penguin opened up an interesting question: what would you do if you discovered Batman’s secret identity? John Kourounis would try to work for him, while John Barrowman would tell nobody except his husband. Later, Harley Quinn Smith had a special interview with her father Kevin Smith about the story he wrote for Detective Comics #1000. Kevin had been visiting the offices when he was casually offered a spot on the milestone issue and was thrilled to learn Jim Lee would be penciling his story. “You had me at Tec #1000," he said.

If you missed any of the excitement or celebrations, don’t forget that DC Daily is available to stream every day here, exclusively on DC Universe. There are lots of surprises in store for viewers next week. After all, you never know who might stop by the couch!

What did you think of Detective Comics #1000? Let us know in our Community!