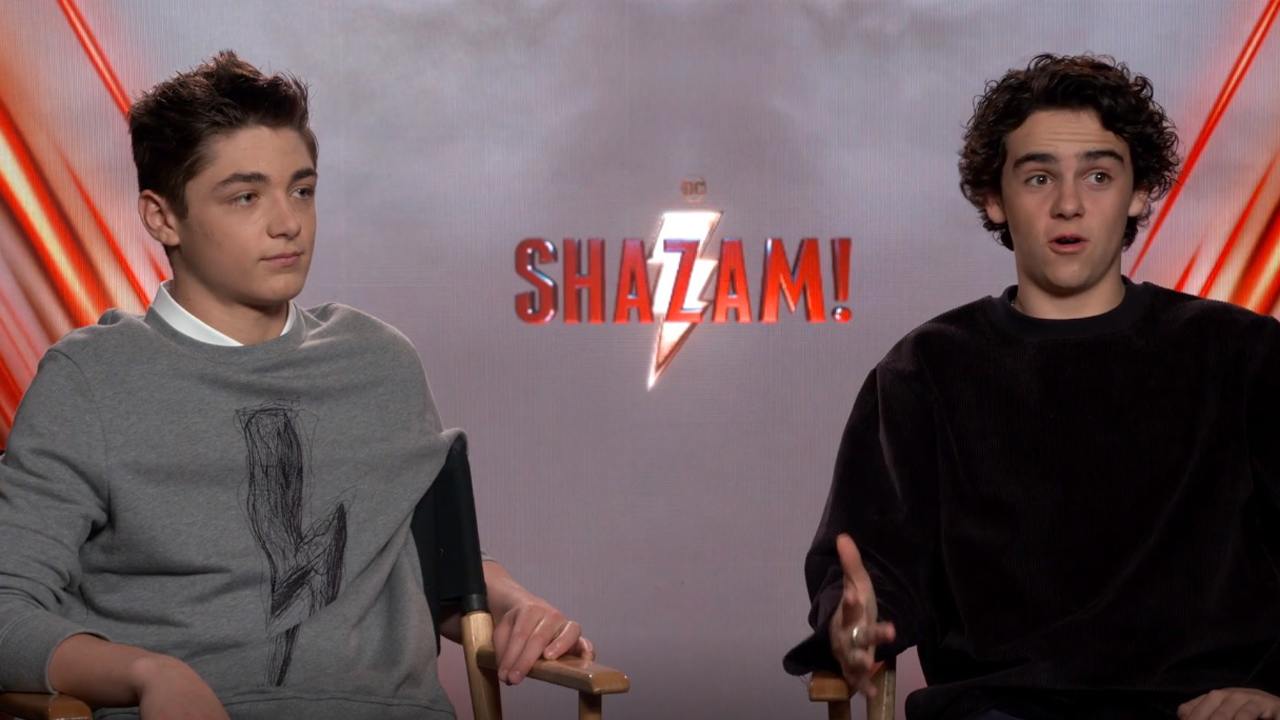 This Week on DC DAILY: Chatting with the Cast of SHAZAM!

Did you catch any of the magic on DC Daily this week? The DC Universe show had lots of great moments, including interviews with the cast of Shazam! Here are some of the highlights…

On Monday April 1st, Sam Humphries and Clarke Wolfe presented some highlights from WonderCon. Did you hear about DC Universe’s new expanded comics library? Or about when the cast of Shazam! surprised DC Universe members at an exclusive screening? The gang also interviewed Scott Snyder and Greg Capullo on their upcoming magna opus Batman: Last Knight on Earth... Back at the DC Daily studio, the panel (Clarke Wolfe, Markeia McCarty, Sam Humphries, Samm Levine, John Barrowman, Amy Dallen, John Kourounis, and Whitney Moore) broke down their picks for the latest round of Meta Madhouse -- Shazam’s Sorcerers. The discussion had Markeia and Whitney debating the merits of Hoppy the Marvel Bunny... “It’s a bunny," Whitney dismissively said. “A Shazam bunny. You don’t know the limits of what Hoppy the Marvel Bunny could do," Markeia countered. Did you vote this week? Did you agree with their choices?

On Tuesday April 2nd, Hector Navarro and Whitney Moore did some more reporting from the WonderCon convention floor. The episode included footage from the already legendary Batman 80th birthday panel (featuring Kevin Conroy, David Mazouz, Jim Lee, and many more). DC Daily was also on hand to interview Scott Snyder, Neal Adams, Peter J. Tomasi and the other creators who made sure Detective Comics #1000 was the event of the year. And we heard from Kevin Conroy (Batman), Susan Eisenberg (Wonder Woman), and George Newbern (Superman) about reuniting as the Trinity for Justice League vs. The Fatal Five!

On Wednesday April 3rd, the DC Daily panel (Markeia McCarty, John Kourounis, Sam Humphries, and Whitney Moore) gave their thoughts on the Young Justice: Outsiders episode “Away Mission”. This led the panel to debate the merits of Forager. Sure he’s cute, but is he useful? Next, Hector Navarro interviewed Shazam! producer Peter Safran and director David F. Sandberg. The two had a blast putting all the Easter eggs into the movie and revealed some other cool behind the scenes tidbits. Afterwards, the DC Daily Book Club (John Kourounis, Amy Dallen, Hector Navarro, Samm Levine, Sam Humphries, and Whitney Moore) discussed chapters 7 through 9 of Batman: Hush. Was it a good idea for Batman to reveal his secret identity to Catwoman? The book club chat led to some interesting revelations from Whitney’s past, and viewers were treated to some old home movies of her in a Catwoman costume. Eat your heart out, Michelle Pfeiffer...

On Thursday April 4th, the DC Daily panel (Clarke Wolfe, Sam Humphries, Markeia McCarty, Hector Navarro, and Samm Levine) gave their thoughts on the Doom Patrol episode “Therapy Patrol”. The panel debated which member of the team needed therapy the most -- Cliff, because he can’t cry, or Larry, because of his repressed sexuality... As an added bonus, a behind the scenes featurette was presented showcasing some cool interviews with the cast of Doom Patrol... Speaking of cast interviews, Hector Navarro sat down to talk with the cast of Shazam! (Mark Strong, Asher Angel, and Jack Dylan Grazer), and they couldn’t have been more enthusiastic about their roles in the blockbuster film. If you weren’t excited about the movie yet, these interviews are guaranteed to peak your curiosity.

On Friday April 5th, the DC Daily panel (Clarke Wolfe, Hector Navarro, Markeia McCarty, Whitney Moore, Sam Humphries, Harley Quinn Smith, Amy Dallen, John Kourounis, and Samm Levine) talked about their favorite WonderCon moments. A few of them hosted some memorable panels, and geeked out upon seeing their favorite creators. The panel also gave their thoughts on the new Joker trailer before moving on to the Shazam! movie. This led to an interesting question: which panelist is the most worthy and pure of heart? Can you guess who everyone nominated? Speaking of Shazam!, Hector Navarro sat down to chat with the film’s star Zachary Levi, who spoke about making sure he channeled Billy’s spirit. ““We really wanted to make sure his innocence was still there," Zachary said. He also treated Hector to a reading of his character’s iconic catchphrase -- “Holy moly!"

If you missed any of this fan-focused fun, don’t forget DC Daily is available to stream every day exclusively on DC Universe! If any of the above episodes sound great, wait until you see what the gang has in store for next week. After all, you never know who might stop by the couch!