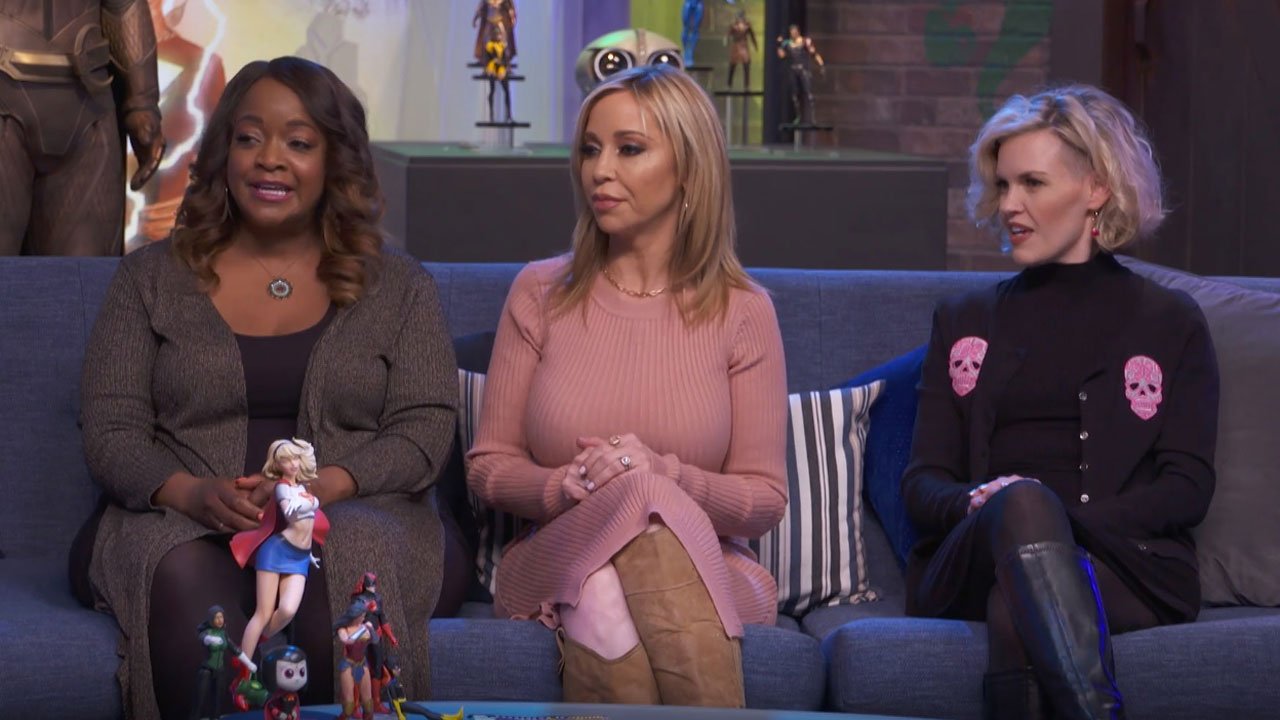 This Week on DC DAILY: The Cast of DC SUPER HERO GIRLS

It’s was another great week on DC Daily, with each episode bringing captivating comic discussions and awesome interviews. This week featured the return of LaMonica Garrett (the Arrowverse’s Monitor) and celebrated International Women’s Day with a visit from the cast of DC Super Hero Girls! Here are some of the highlights…

On Monday, March 4th, the DC Daily panel (Hector Navarro, Clarke Wolfe, Markeia McCarty, Whitney Moore, and John Kourounis) had an in-depth discussion on the Young Justice: Outsiders episode “Princes All". The gang had a debate about Black Lightning accidentally killing Plasma and if he unfairly blamed himself. “I don’t know if this is controversial or not, but I think if you kill a child you should be punished," Whitney said.  “At the end of the day he was doing his job as a superhero to fight this giant dangerous monster," Clarke countered, as she reminded us he wasn’t trying to kill the creature.  Afterwards, Hector Navarro gave viewers an update about what’s next for DC-TV, followed by another “Hector Guarantee” segment. This week, Hector recommended the goodness that is the live-action Shazam! series. Check it out! Next, the DC Daily panel (John Kourounis, Harley Quinn Smith, Clarke Wolfe, Hector Navarro, and Whitney Moore) talked about the Batman: Gotham Knight animated film. While pondering Bruce’s morality, Clarke keenly observed, “Batman never learns the right lessons from anything." Harsh!

On Tuesday, March 5th, the DC Daily panel (John Kourounis, Clarke Wolfe, Hector Navarro, Sam Humphries, and Amy Dallen) were joined by LaMonica Garrett (who plays the Monitor in TV's Arrowverse) to break down Batman: The Merciless #1, and to show off the cool "Batman: God of War" statue. The gang was eager for spoilers on the upcoming "Crisis on Infinite Earths" TV event, but Lamonica was careful not to take the bait. Next, John Kourounis sat down with Dan DiDio for another DC Nation session to discuss Dial H for Hero and why he ended Green Arrow. “We will have another Green Arrow book. He’s one of my favorite characters," Dan promised, and said there was big plans for him in the larger DCU. Afterwards, the DC Daily panel returned with Lamonica to discuss the 2009 animated Wonder Woman movie.  “There are some things of value in this movie but I f---ing hated Steve Trevor,” Clarke said. The cast may not have been too fond of Steve or Ares, but they loved Diana and how she took control of every scene she was in.

On Wednesday, March 6th, the DC Daily panel (John Kourounis, Clarke Wolfe, Sam Humphries, Amy Dallen, and Hector Navarro) were joined by Lamonica Garrett to talk about Wonder Twins #1. Every member of the panel was able to relate to the teenage awkwardness, especially the thunder lust. If you don’t know what thunder lust is, check out Wonder Twins #1 and relive your most embarrassing high school moments... Next, Joshua Williamson had a special storytelling segment where he revealed how he became the writer for The Flash. We won’t spoil it here, but it was a funny story that involves sweaty shirts at San Diego Comic-Con... Afterwards, the DC Daily panel (Clarke Wolfe, Harley Quinn Smith, Brian Tong, Samm Levine and Markeia McCarty) gave their thoughts on the Super Friends episode “The Fear”, featuring Adam West as Batman! “We all know Batman’s origin story and feel like we’ve seen this one thousand times, at least I did. This was the first time Batman’s origin was told outside of the comic," said Clarke. The gang loved the 1985 animation, and Harley couldn’t help but compare Scarecrow to a Scooby-Doo villain.

On Thursday, March 7th, the DC Daily panel (Clarke Wolfe, Sam Humphries, Hector Navarro, Markeia McCarty and Samm Levine) gave their thoughts on the Doom Patrol episode “Puppet Patrol”. Samm gave his co-hosts a geography lesson when he explained that the Darien Gap would’ve prevented the Doom Patrol from finishing their South American road trip. “Google it," Samm said. Next, Matt Bomer appeared in a special featurette to give fans insight on what makes Negative Man tick and show off some cool behind-the-scenes footage.

On Friday, March 8th, DC Daily celebrated International Women’s Day with a special episode. First, an all-female DC Daily panel (Clarke Wolfe, Whitney Moore, Markeia McCarty, and Amy Dallen) gave their thoughts on DC female properties they’re looking forward to -- from Batwoman to Stargirl and of course, Wonder Woman 1984. “There’s a variety of options out there with so many of these wonderful characters of DC being brought to life,” Amy happily said. Next, Amy had a chat with Tara Strong (Batgirl), Kimberly Brooks (Bumblebee), and Kari Wahlgreen (Zatanna) about the brand-new cartoon DC Super Hero Girls! Although the voice actresses were all adults, they spoke of how they were able to identify with their teenage characters. “I think we all kind of still sound like teenagers,” Tara Strong said. Next, Clarke Wolfe spoke with author Leigh Bardugo about her novel Wonder Woman: Warbringer. Leigh was a big fan of mythology and loved getting a chance to connect it to the DCU. “I loved getting to write about the Amazons, I loved getting to write about their culture and putting my stamp on the world,” Leigh said. After a discussion on Female Furies #2, the episode closed out with a performance from Harley Quin Smith’s band the Tenth. Yes, Harley can rock!

If you missed out on any of the fun, don’t forget that DC Daily is available to stream every day right here on DC Universe! The fandom fun never stops. So make sure you check it out. After all, you never know who might stop by the couch!