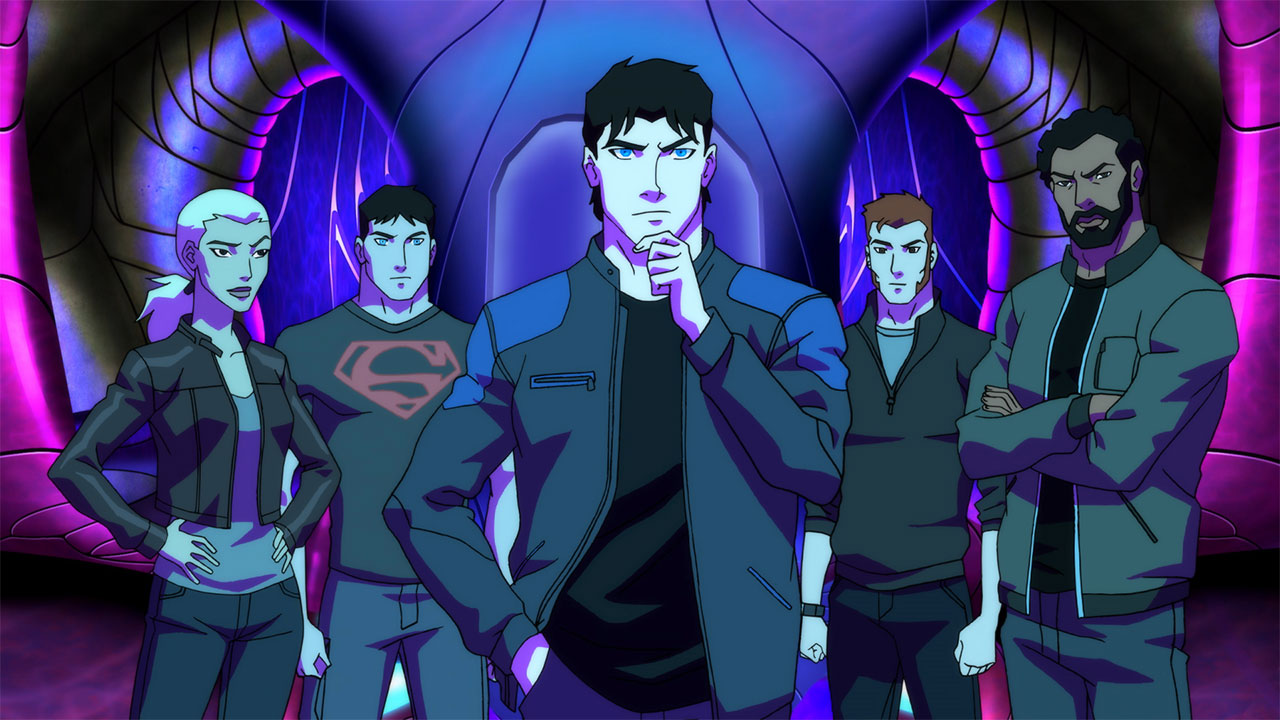 We get straight into the action this week in episodes 10 through 13 of Young Justice: Outsiders. These are the final four episodes of the season's first half: "Exceptional Human Beings", "Another Freak", "Nightmare Monkeys", and "True Heroes". 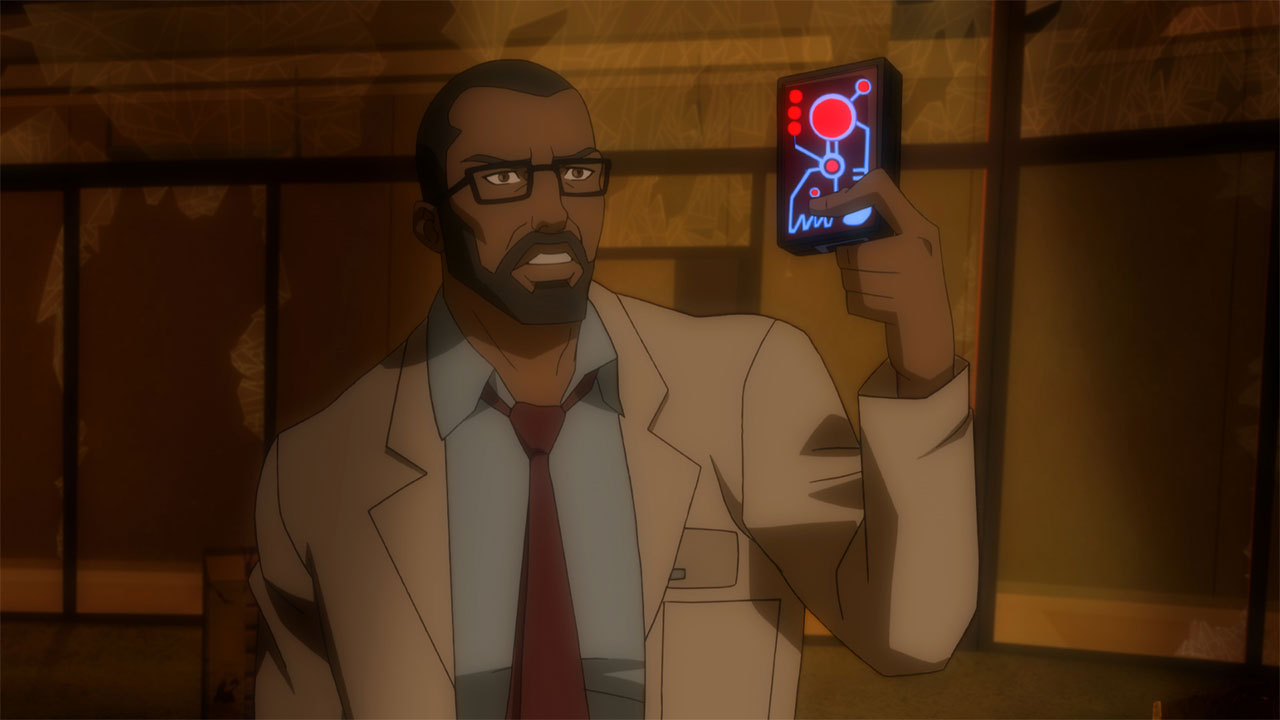 As "Exceptional Human Beings" begins, Batman, Katana, and Metamorpho (a nice nod to the original Outsiders team in the comics) are headed to Santa Prisca where a mysterious foe has been rumored to be leading the League of Shadows. Whilst they are taking care of this threat -- which is likely the son of Santa Prisca, Bane -- we get our first glimpse of Vic Stone, the boy who would become Cyborg. We heard him referenced on the radio in a previous episode, but fans will surely be ecstatic to see him in the flesh. As is always the way, he brings family with him. His father, Silas Stone, is fixing a mysterious Fatherbox, which can heal Parademons and Apokolips tech -- for Steel!

We get to see a little romance between Conner and M'gann. Meanwhile, Nightwing is still training his new team at Mount Justice under the watchful eye of Jefferson and Dr. Jayce. There's definitely love in the air between Halo and Geo-Force. Though before we see too much of that we're back to Santa Prisca, where Katana and Metamorpho have come across Lady Shiva and a very imposing secret hideout. While they look for the League, Brion is unhappy about the fact that Nightwing isn't following the lead on his sister Tara being in Santa Prisca; but little does he know she supposedly "washed out," and is somewhere else entirely.

Vic Stone isn't the only new teen superhero introduced in this episode. We see him in a locker room where a young boy named Cisco, known to most fans as Vibe, is being bullied. While that showdown takes place at Heywood High, we have Batman facing down with Bane in Santa Prisca. Back in Star City Artemis is helping Halo sign up for school, when Roy runs out to find Cheshire spying on the family and her daughter. Roy implores her to stay, but she reveals she came to say goodbye and walks off into the night. In Santa Prisca, the Bat is still fighting a now Venom-less Bane who seems to be stronger than ever. After a battle between Katana, Metamorpho, Lady Shiva, and Deathstroke, we get a sombre hint at Vic's fate as he gets scouted by Metropolis U.  As the coach explains that he thinks Vic has a bright future, we see Silas clutching the Fatherbox. 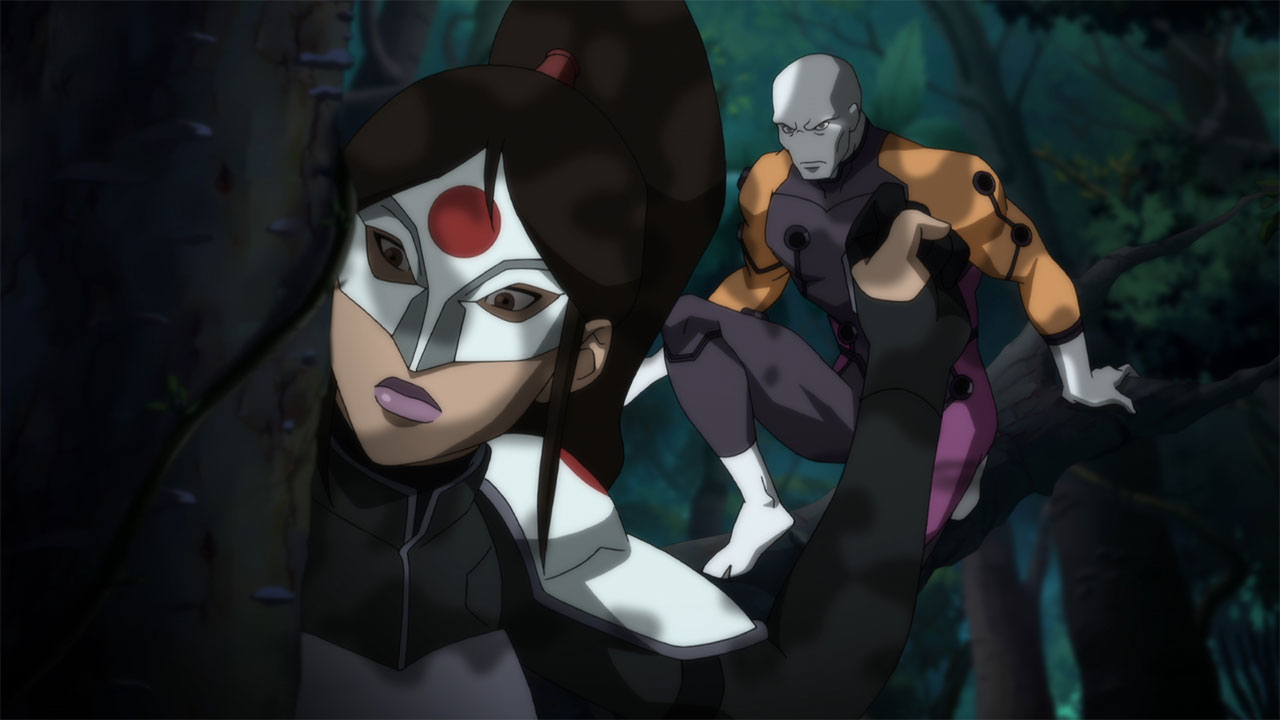 That leads perfectly into the intro of "Another Freak", where we see Vic fighting with his father before a terrible electrical accident in Silas' workshop. But before we can find out Vic's fate, we're off to Happy Harbor where Halo and a glamour-charmed Forager are heading to school, which Brion is none to happy about. Uh Oh!

Things aren't looking good for Vic. The accident has torn him almost in two. He's about to die, but his desperate dad utilizes the Father Box to try and save him. As Vic is wrapped in a metallic cocoon, we see two other confused teens try to make their way at school, as Halo and Forager make their first friend, Harper Roe (who just happened to be Batman's sidekick Bluebird in the comics).

Vic Stone's transformation into Cyborg is complete. It looks like he'll be heavily impacted by the Apokolips tech, likely making him a good ally or fearsome foe in the Outsider's inevitable battle for New Genesis. Nightwing heads to Happy Harbor to tell Brion that his sister is no longer on Santa Prisca; the young hero is not happy about it and gets a stern talking to from Dick. Bluebird, Violet, and Forager are lunching together when Violet gains a new purple aura and creates a portal to Cyborg, whom she stops from going on a murderous rampage before taking him back with her to the high school. It's a powerful moment that hints at the true strength Halo can wield, as well as an exciting introduction to the team. 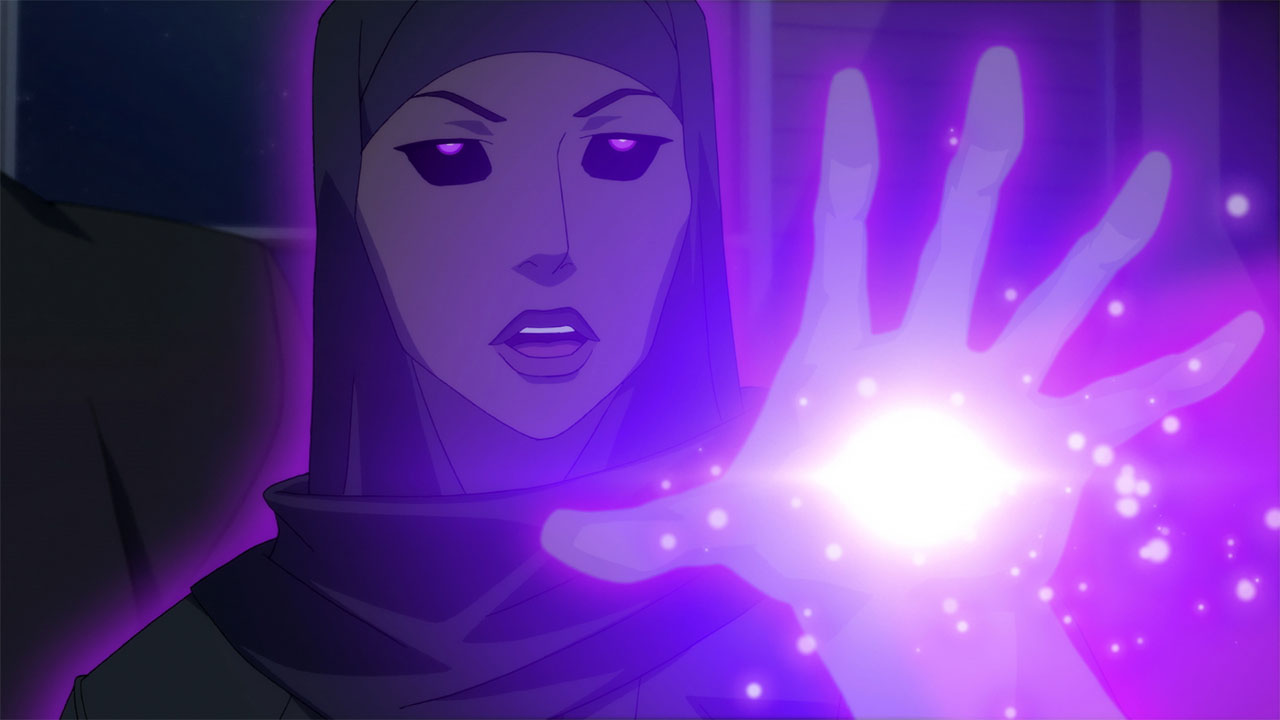 In "Nightmare Monkeys", Granny Goodness is still up to her old tricks with the dangerous Goode Goggles, which are about to put Gar in serious danger. Meanwhile in Happy Harbor, the team are trying to understand Halo's new Mother Box-style powers -- and coming to terms with the realities of what they could mean -- leading to a big reveal about Violet. It turns out she's the soul of a Mother Box in human form, which led to her ease of locating and saving Vic. The latter ends up getting into a big fight with the Supercycle, which recognizes his Father Box-enhanced anatomy. Conner and M'gann suffer from a lack of privacy and start to plan for their evergrowing brood of superheroes.

Meanwhile, we get to the meat of the episode as Gar tries on some malfunctioning Goode goggles and begins a journey through the past, which gives us an idea of where he's been for the last couple of years. His first vision focuses on some dearly departed members of Young Justice. His second hallucination is one of the coolest moments of the series so far -- as the Doom Patrol is introduced in a Teen Titans Go! parody, and we learn that Gar was adopted by Elasti-Girl after his mom died. Alas, the heroine died alongside her whole team. Gar was about to start a new life with M'gann, when he was taken by Elasti-Girl's manipulative, machiavellian husband Mento. As Gar relives this experience, he almost dies; and there's a huge potential reveal that links Beast Boy to the classical Chinese legend of the Monkey King. 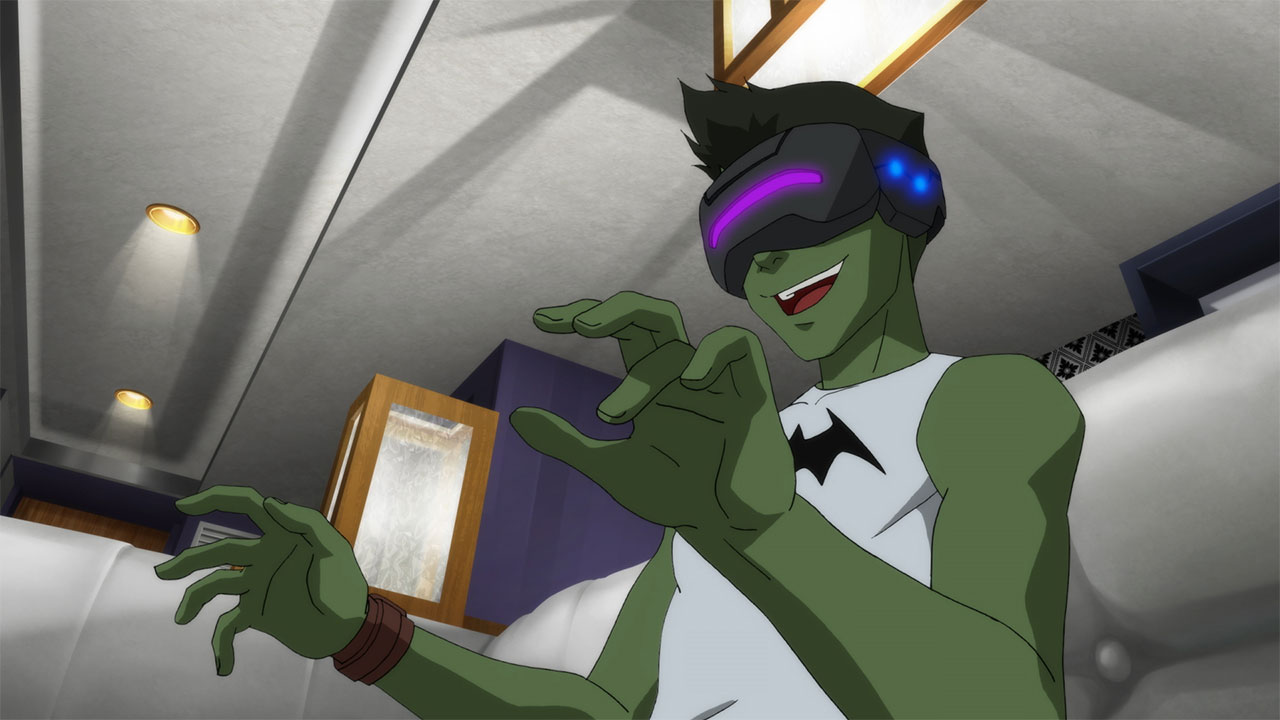 In "True Heroes", it's Halloween in Happy Harbor, which is always a fun time. Just as the teens are about to head off to the annual holiday dance, Dick jumps in and takes the team on a search for Tara. Though Halo and Cyborg stay home in case Vic goes all murderous again. Gar's experience with the Goggles has revealed their aim -- to scan users for the metagene, and to brainwash them into heading to meta-training posts. It looks like the League of Shadows sent Tara to Granny Goodness. Is she in line to become a Female Fury?

Dr. Jayce gives Halo a lesson in love when Victor becomes consumed by the Father Box, putting all of them in mortal danger -- as Halo can't control her powers. In the meta-teen depot the heroes find a deadly meta fighting ring/auction, where a brainwashed Tara has to battle a mind-controlled Milestone hero, Holocaust. The team bids on Tara, and helps her escape.

But back at Conner and M'gann's home, Father Box is wreaking havoc trying to take down the Mother Box that lives inside Violet, with only Victor to stop it. Luckily Violet prevails, helping Victor rid himself of the Father Box forever, and gaining a greater understanding of her powers as she does. Dick, Artemis, Jefferson, and Conner head off to shut down the meta-ring. This leads to a massive battle with the villains running it, as Conner faces down Icicle Jr. The bidders evacuate the meta-depot as the heroes deprogram the captured meta-teens. 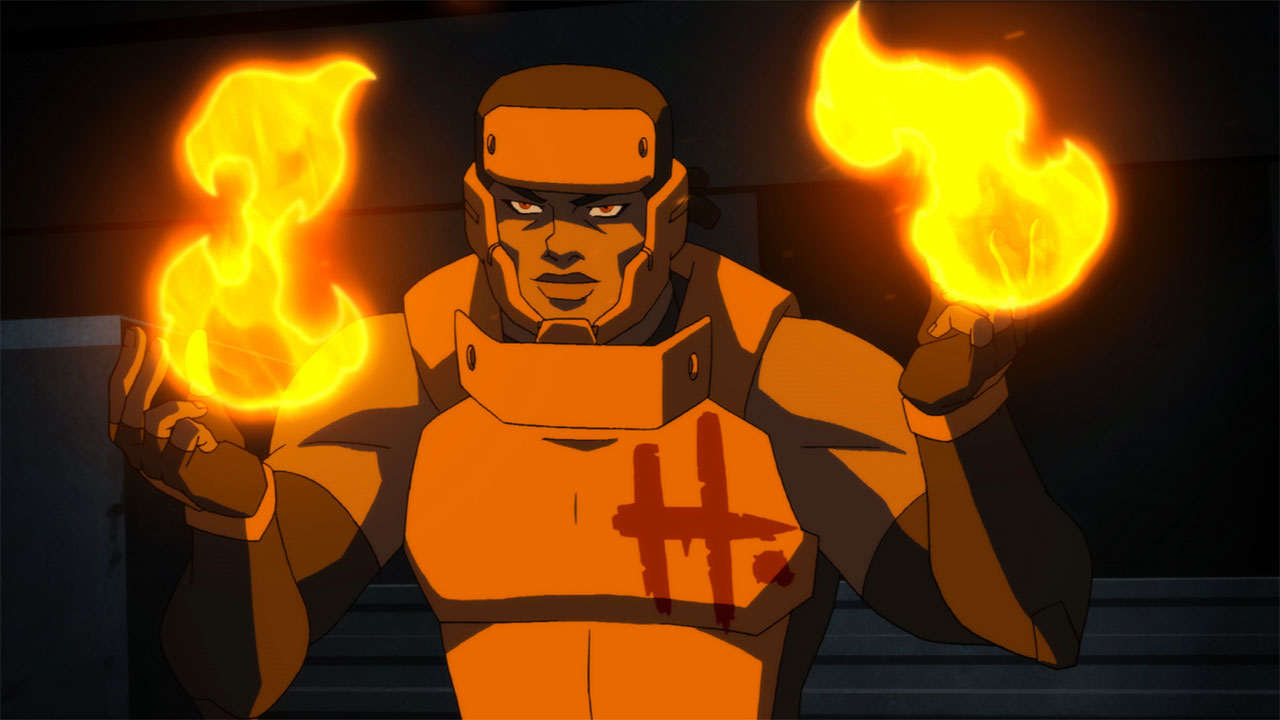 As we near the end it seems like all is well, with the heroes reunited and Tara and Brion back together. But as Conner and Dick decide that the newbies are ready for the team, it's revealed that Tara was sent by Deathstroke to infiltrate the group -- and that she has succeeded!

Young Justice: Outsiders will return in June. It's gonna be a long wait. But fortunately, we have the next DC Universe original show debuting in just a few weeks. Get ready for Doom Patrol!

What's your favorite moment from the first half of Young Justice: Outsiders? Let us know in our Community!