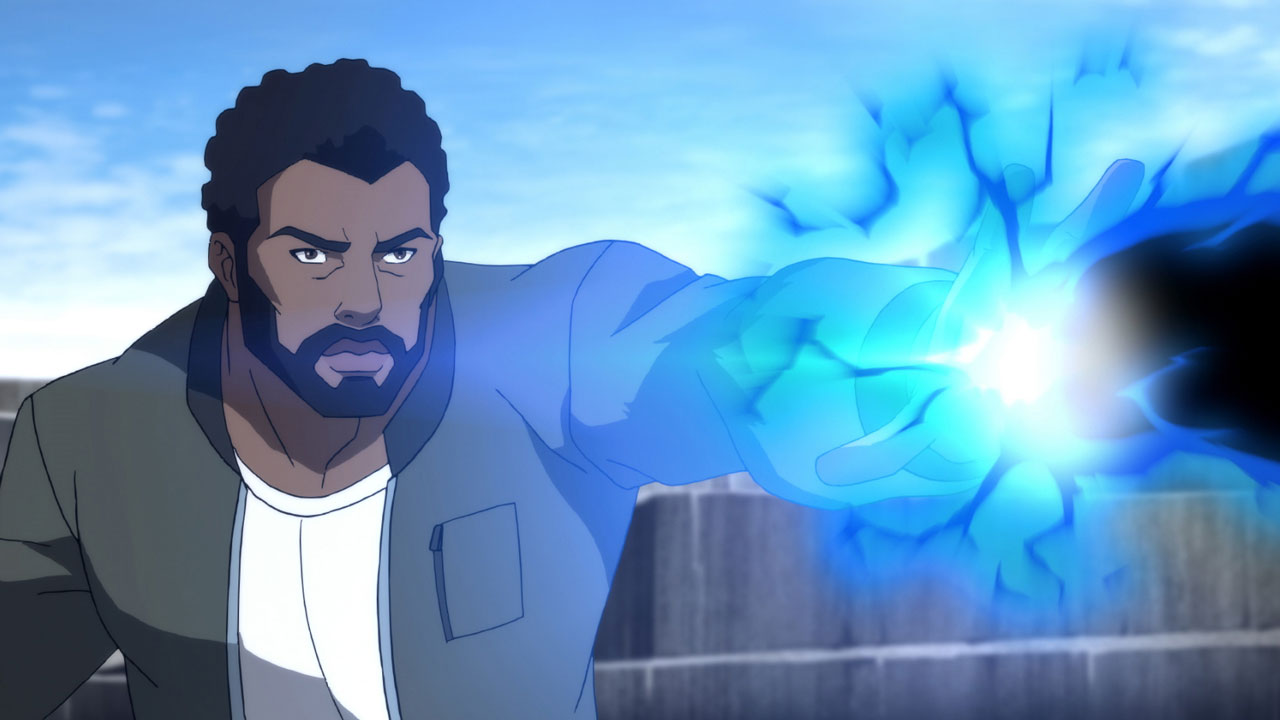 After the mayhem and intrigue of the last three episodes, Young Justice: Outsiders episodes 7 through 9 throws us into the deep end. For starters, episode 7, "Evolution", features an intro that brings Vandal Savage's daughter Cassandra -- who was created for TV's Legends of Tomorrow -- into the world of the talented team.

Cassandra is at the core of the events of this episode as we get a look back at a different version of the notorious villain's history. She retells her father's story from Warworld, where the family and an older woman named Olympia are based. Her tale comes from a journal gifted to her by her caregiver, and features Savage's meta-gene being triggered by a human attack and the roles he took on throughout history.

Meanwhile, back on Earth... The burgeoning Outsiders team is training and now the new members even have their own suits. One of the most interesting nods here is that Brion's suit was created by longtime Justice League member Fire, who has yet to be included in the cast of Young Justice... So could we be seeing Beatriz da Costa in a future episode? 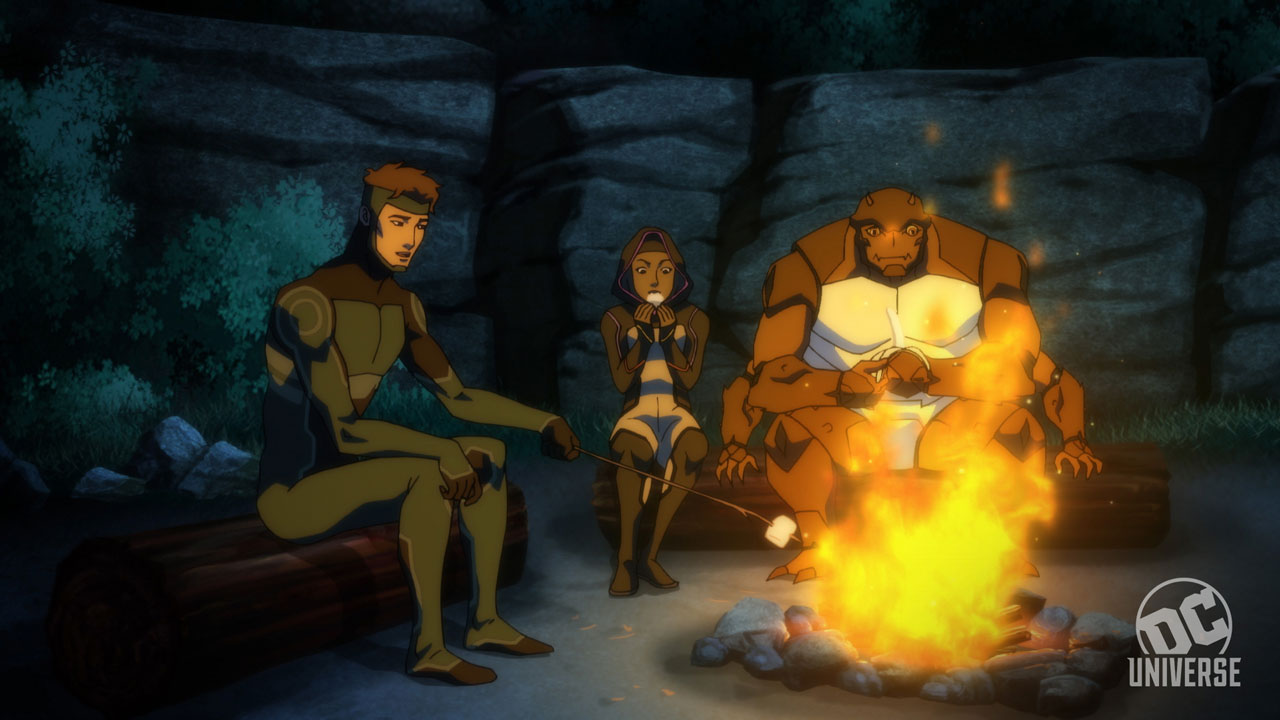 Cassandra's monologue is interrupted when we see Vandal Savage apparently protecting the Earth from an alien invasion in coordination with Lex Luthor. Ironically, the pair's nefarious scheming, and the retirement of half of the Justice League, means that there are no heroes left to protect the Earth from the rapidly approaching alien armada. Juxtaposing Cassandra's very adult coming-of-age are Brion, Halo, Forager, Artemis, Conner, and Dick roasting marshmallows around a campfire chatting about who would win in a fight between Superman and Batman, leading to a conversation in which Dick regales them with the story of the first meta: Vandal Savage.

Back on Warworld, it's revealed that Savage and Luther weren't trying to save Earth for the sake of the humans who live on it, but as part of some kind of a wider plan including the omnipotent Darkseid. Young Justice adds a lot of great new stuff to its canon in this episode, but the reveal that Savage and Darkseid have been in cahoots since the 13th century is a definite highlight. After Darkseid came to take over the planet he was challenged by Vandal Savage, living at that time as Genghis Khan. Although Savage was beaten by the New God, he managed to forge a fragile agreement with him that the two would conquer the galaxy together.

On Earth, the new team members have chosen their superhero names with Violet keeping Halo, Brion considering Hot Lava but eventually settling on Geo-Force, and Forager sticking with Forager... After all, how much of a secret identity can a giant bug from New Genesis really maintain? The action, however, is happening above them, as Darkseid's son Kalibak is sent to help Vandal Savage's assault on the armada. After Kalibak decimates the two fleets, Savage realizes he has seen the star-faced creatures before when he was the Babylonian god Marduk when he previously defeated them alongside another daughter, Ishtar. Cassandra takes control of the Warworld and decimates the alien headquarters as Vandal Savage kills the lead star just like he did so many centuries ago, leading to himself and to Ishtar become known as the Light.

"Evolution" offers a bleak ending, as Vandal Savage realizes that the old lady Olympia, who is revealed to be another of his daughters, is suffering some kind of dementia -- and he kills her. It's a vital moment for Cassandra, who comes to the realization she will one day likely come to the same fate at the hands of her immortal father.

After the intergalactic escapades of "Evolution", Episode 8, "Triptych", takes us back to basics, as we're introduced to the inner workings of the Justice League, with more info on the metahuman trafficking ring. Beginning with a failed heist by Livewire, Mist, Shade, and Cheshire, we're quickly back to the criminal activities at the center of this season's conflict. 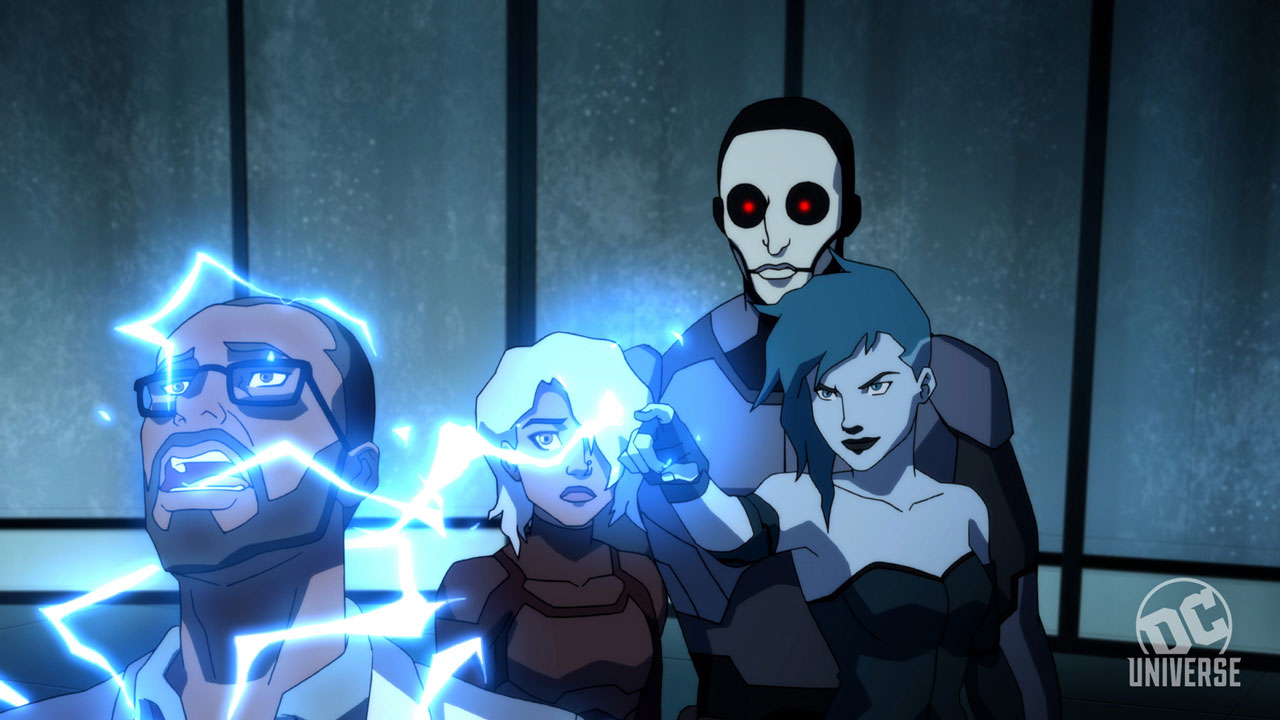 Jefferson and Helga Jace have embarked on a relationship. But he's broken out of that domestic bliss by the rest of the Young Justice-nee-Outsiders who are trying their best to get info out of the injured Cheshire--who happens to be Artemis' sister--because they think she has a lead about the League of Shadows and Brion's sister. After tracking the crim down to her hanger, the team is ambushed and almost defeated by Mist, Shade, and Livewire, but they manage to overcome thanks to quick thinking from Nightwing, sheer force from Black Lightning, and an uncontrollable power surge from Halo. Tigress manages to get her sister to talk, and even though Cheshire doesn't know who's leading the League she reveals they're being run out of Santa Prisca, which Bat-Fans will recognize as the home of Bane. Could he be leading the assassins guild now?

Dick meets with Tim Drake to get some intel and it turns out his team (Spoiler, Orphan, and Arrowette) have been keeping an eye on the Mad Hatter, who's been wearing a suspicious lack of hats and is actually Clayface! Looks like Mad Hatter has been using a mysterious device to control metas including the clay-based bad guy, but the building blows up before they can discover much more. There's plenty of action around the meta-trafficking ring as Miss Martian and Aquaman update Wonder Woman on a breakout coordinated by Sportsmaster and Abra Kadabra on a van carrying metas driven by Shazam and the Flash.

Their involvement gave them a break in the case which uncovered that via Branchwater Industries' Simon Stagg has been manipulating metas, kidnapping them on the way to Belle Reve, then controlling them via nanotech. Turns out Mist and Livewire were also being controlled, but Tim found a device which allowed them to free the mind controlled metas including Clayface. The team also discovered a mysterious meta failsafe device which they sent off to Star Labs, but the biggest worry coming out of this episode is Shade, who's still under the control of Cheshire. Diana is also incredibly unhappy with the multiple teams that the retired members of the Justice League are running behind the remaining members' backs, leaving the superheroes on unstable ground as the episode ends. 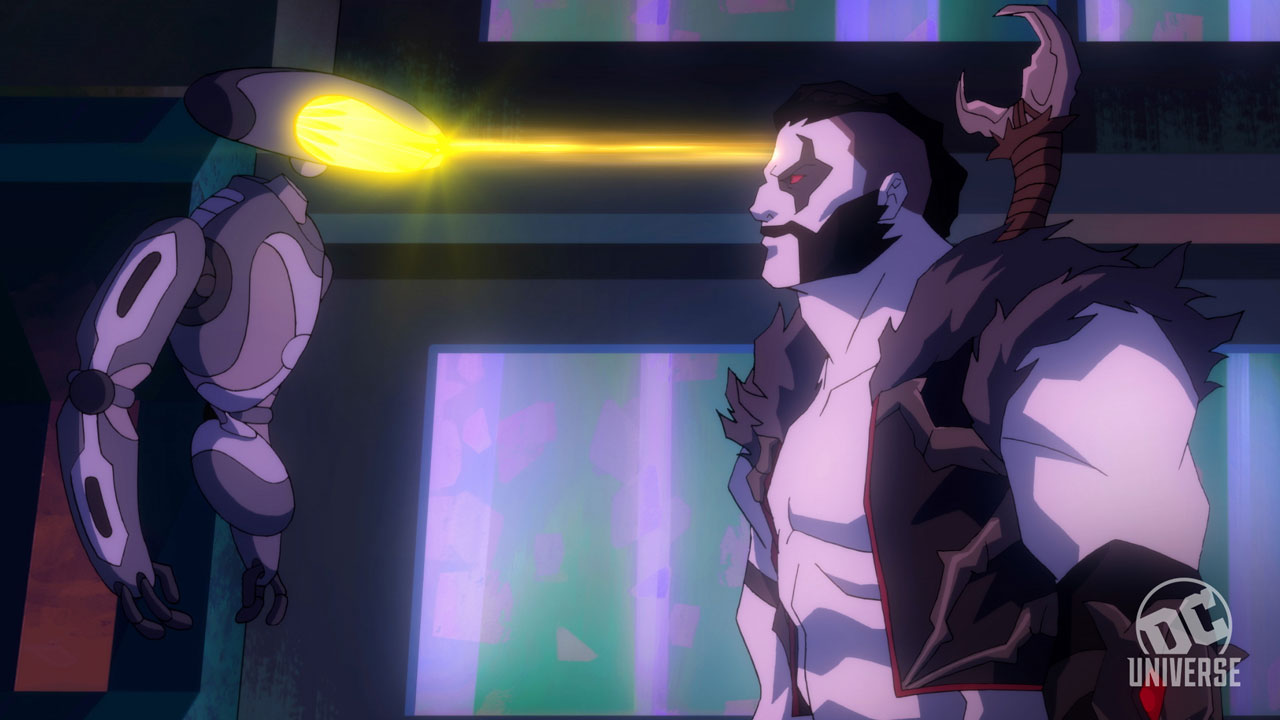 Uh oh! In episode 9, "Home Fires", we learn that Queen Bee is working with Vandal Savage to acquire a mystery meta with the help of Lobo. In better news, Aquaman has started a metahuman youth center for the victims of meta-trafficking. We're introduced to the idea of a superhero daycare where we get to see Mera and Aquababy. It turns out that those Goode V.R. goggles everyone's been playing with were created by Granny Goodness, and she's also apparently been a big part of establishing the youth center. Elsewhere, Nightwing attempts to prepare his team for the unexpected with surprise training. But whereas Halo and Forager do brilliantly, Brion doesn't fare that well. Whilst arguing the benefits of surprise training, Lobo turns up! The "Main Man" ALMOST kills Forager, but doesn't quite manage to stick the landing.

That aforementioned meta-daycare plays a big part in this episode too. Aquaman's brother Orm is planning to kill everyone in it -- which ends up including Bumblebee, Red Tornado, and Iris West -- out of his anger at being imprisoned for so long and having his throne taken from him. He's quickly decapitated by Lady Shiva though, who's been sent by the League of Shadows to stop Orm from enacting what the League sees as a nuclear option. The families inside have no idea how close they came to oblivion... As the episode ends, it's revealed the Light sent the killer not to assassinate but to test the new team being built by Nightwing... And, to our shock and horror, Granny Goodness is a member of the Light!

Are you a Young Justice: Outsiders fan? Let us know in our Community!