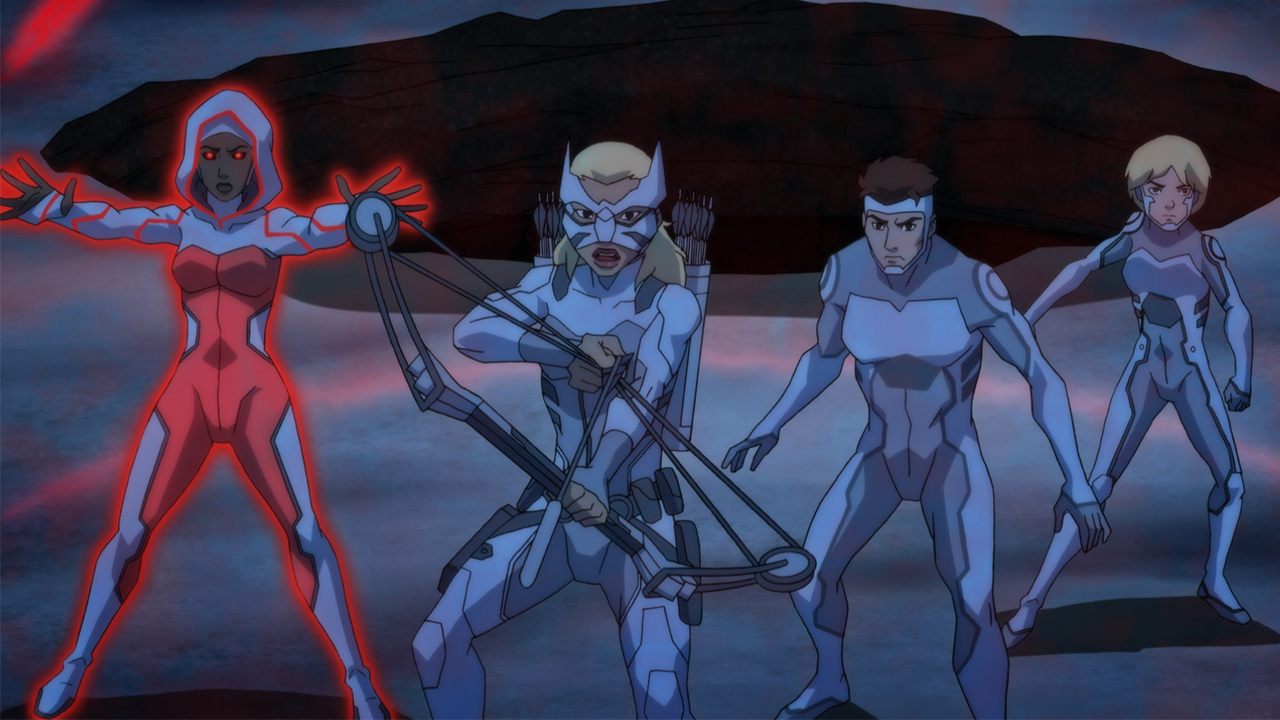 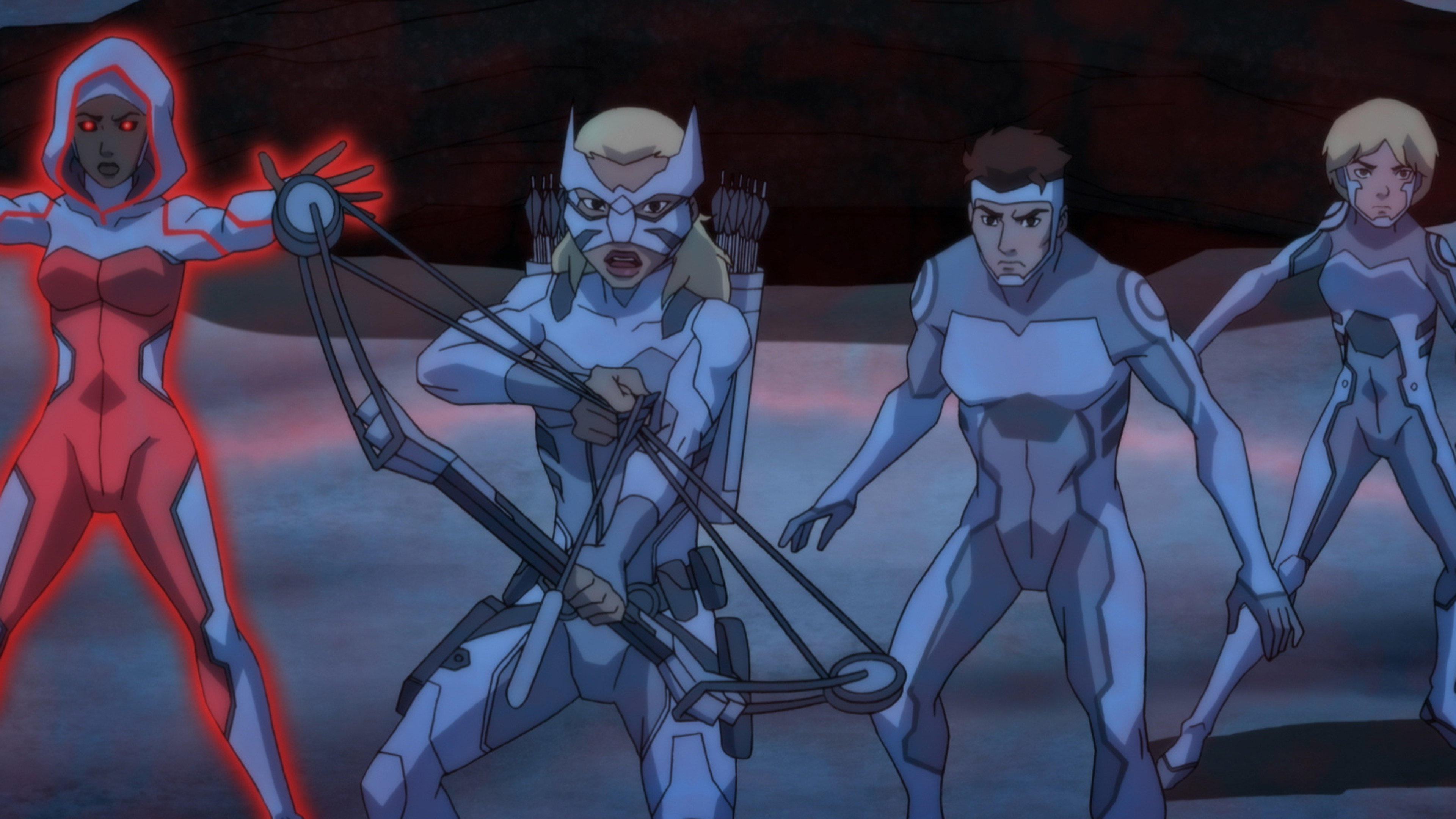 ‘Young Justice: Outsiders’ is back, and to reward our patience as we waited for the second half of Season 3, we've been gifted with not one, not two, but three new episodes. If you need a refresher on where we left things in part one of this season, we've got you covered! There’s a lot of Young Justice goodness to take in, so let’s crash the mode and get to it! 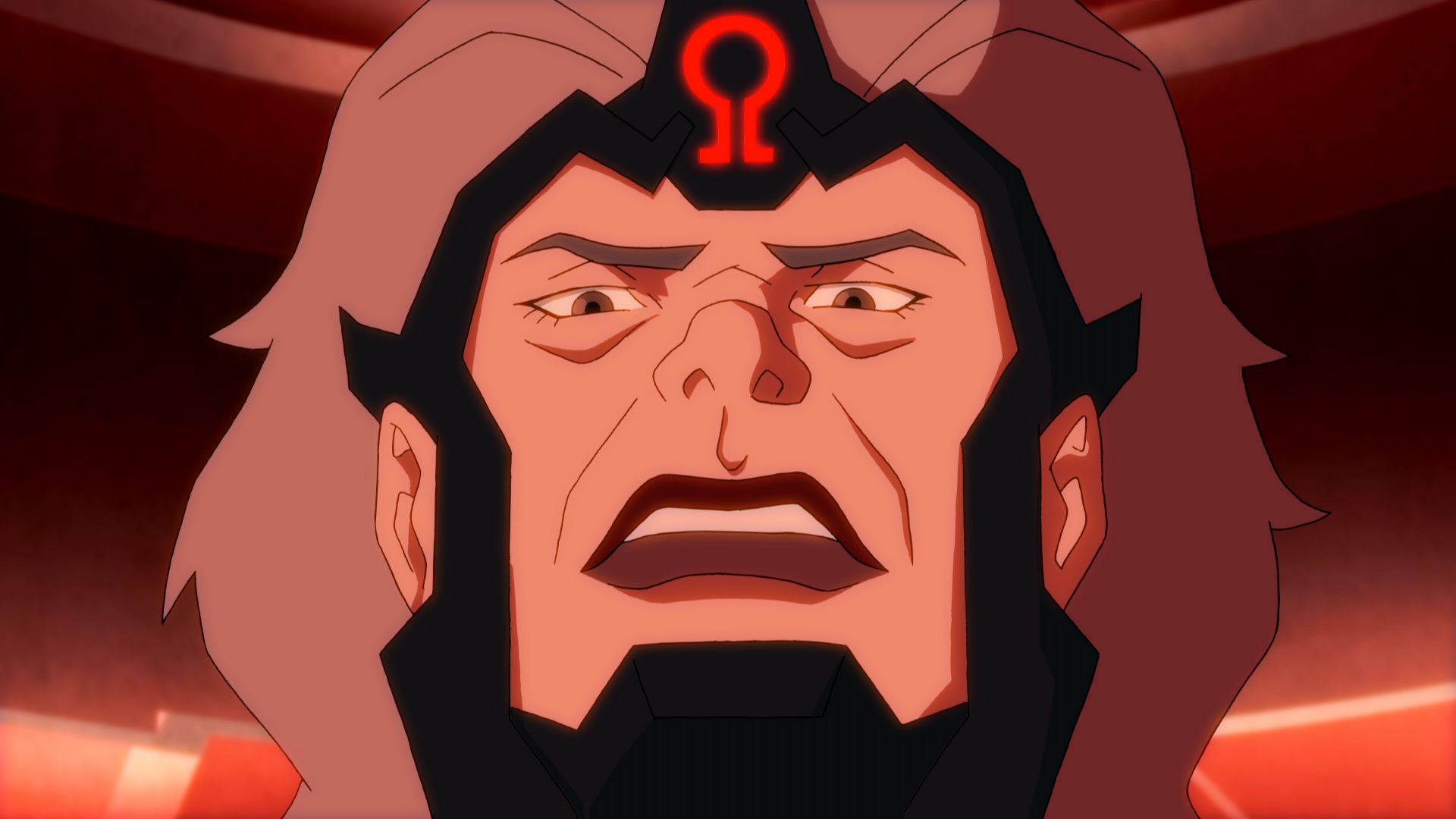 The first of the three new episodes, "Influence," kicks off with members of the Justice League — Superman, Wonder Woman, Green Lantern, Hawkman, and Hawkwoman — off-planet on Thanagar, getting a pretty heartless dressing down from Commander Talak. Basically, after all the trouble earthling metahumans have been causing across the universe — whether or not they were under mind-control — he’s just plain sick and tired of the endless cycle of disasters followed by Justice League apologies. And honestly, can you blame him? On the upside, Green Lantern finds a trail to follow that leads them to a mysterious asteroid base, which totally isn’t a trap.

Meanwhile at Mount Justice, Halo is extolling the virtues of the breakfast burrito — and she’s absolutely right, even if Brion and Tara seem a bit skeptical. Nightwing, Superboy, and Artemis offer Brion, Tara, Halo, and Forager spots on the covert ops team, but not before warning them about the dangers of team life — you know, Wally going full Speed Force and all. So, no pressure or anything, kids, but you have to decide right now if you’re in. 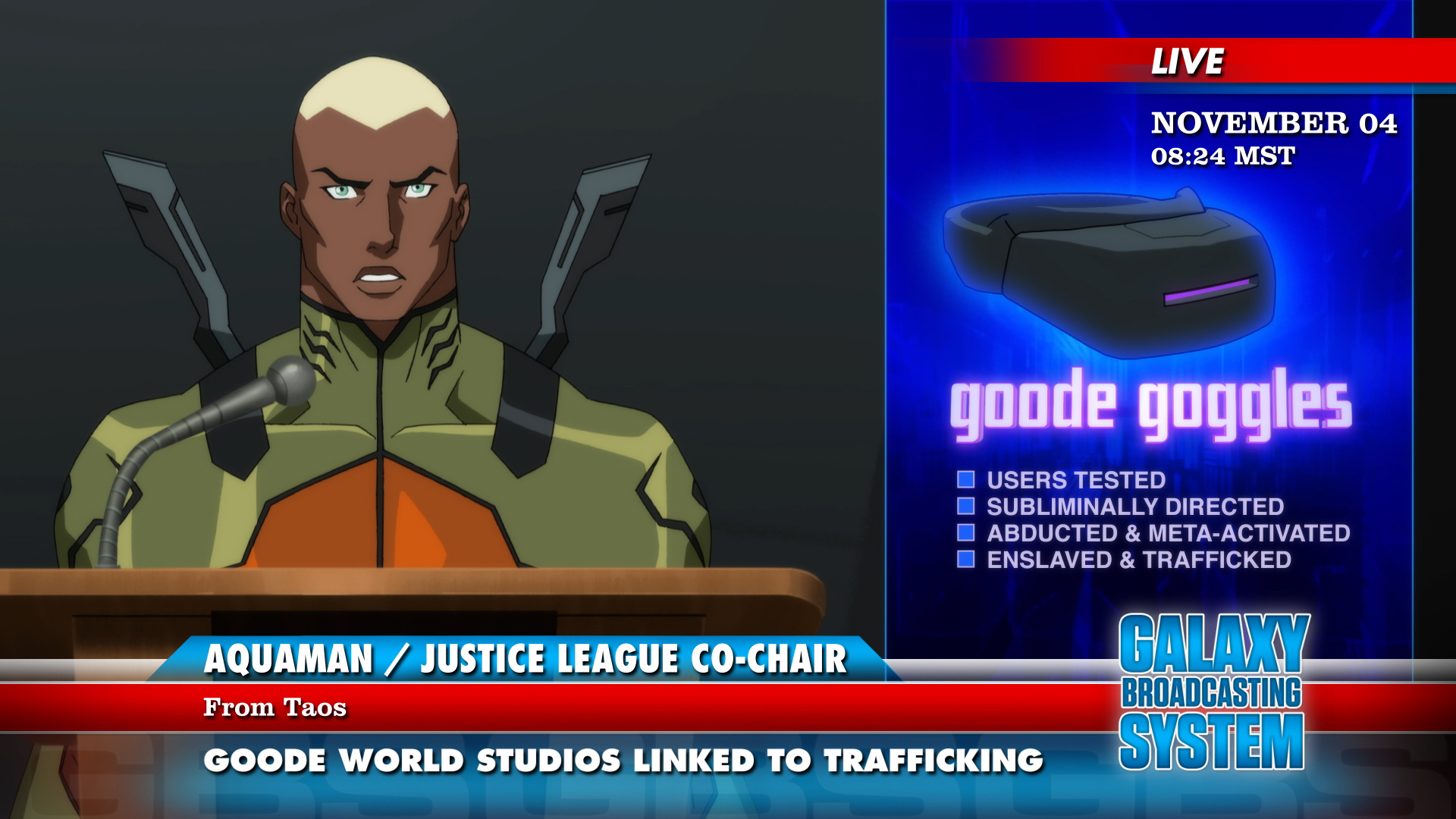 Kaldur gives a press conference catching everyone up on the nefarious Goode Goggles and their connection to the meta-human trafficking scheme. He also unveils the new S.T.A.R. Labs Meta-Human Youth Center in Taos, where the rescued trafficking victims will be getting counseling, support, and some good, clean New Mexico air. And he wants the governments of the world to investigate Goode World Studios, which honestly sounds like kind of a no-brainer.

To save some face, Granny Goodness herself goes on TV to offer a mea culpa over the whole VR goggle fiasco — but not without some careful scapegoating to exonerate herself. Granny announces the goggles have all been recalled, new tech is on the way, and her company is helping fund the Meta-Human Youth Center.

Speaking of her company, one of her biggest and most disgruntled stars, Beast Boy, thwarts a purse-snatching, giving him a taste of the hero life he left behind. Granny is thrilled about the social media buzz the stunt attracts — but Garfield is having none of it. Touchy work environment, that one.

Up on the Watchtower, new recruits Terra, Geo-Force, Halo, and Forager are made official members by Miss Martian. Artemis points out that it’s great to have two more girls on the team, but Halo has some thoughts about that: despite the outward appearance and the whole "soul of a Motherbox" thing, Halo doesn’t know if they identify as a girl or a boy. The team members – and, more specifically, Halo’s boyfriend, Geo-Force — are totally okay with this, because Young Justice is woke, y'all.

Megan also announces that Superboy and Tigress are rejoining the team, along with Beast Boy, who has his sights set firmly on taking down Granny Goodness. That’s a lot of members to juggle; hope there's enough chairs for everyone at Mount Justice.

In Star City, Artemis and Will get a visit from Jefferson and Helga, who is looking for a fully-equipped lab to work on helping Victor get his life back — since he’s apparently not interested in that superhero life. And in case there was any doubt about Tara’s double-cross from the end of the mideason finale, we see her recording Helga’s conversation and then Deathstroke listening to the recording at Santa Prisca. So yeah, don’t trust her. 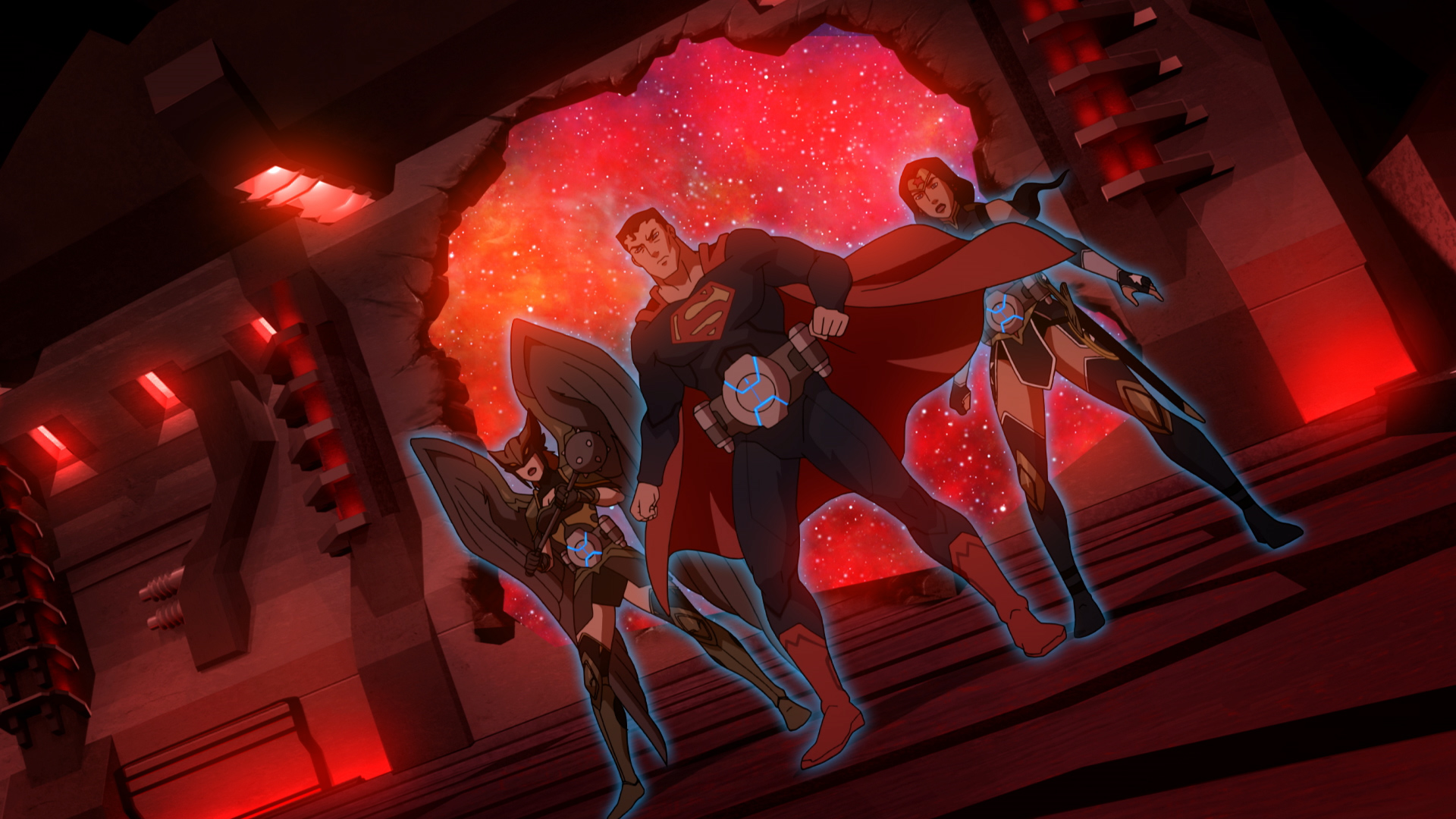 Back in space, Wonder Woman and company approach the mysterious satellite, dubbed the Orphanage, where Barda is waiting. She's raring to put the hurt on the Justice Leaguers, but Granny Goodness has other ideas — and a good tasing for even thinking of starting a fight with them. But Granny then immediately… starts a fight with them, firing on their ship before they can reach the satellite. Pot meet kettle, Granny Goodness.

During the melee, Superman, Wonder Woman, and Hawkwoman sneak inside, where they find all of the stolen metahuman children held captive, plus some sort of massive weapon. Barda and the Furies attack before they can figure out what it does, then Granny decides to show and not tell and activates the device despite Barda and the Furies being within its range. It looks painful, but Superman breaks free and shut it down it before it can do too much damage. Granny then Boom Tubes them right out into open space. Harsh! Before they freeze, suffocate or implode to death, Roy shows up to save the day. Then Granny opens up a massive Boom Tube and slips away with the entire Orphanage. That... can’t be good. 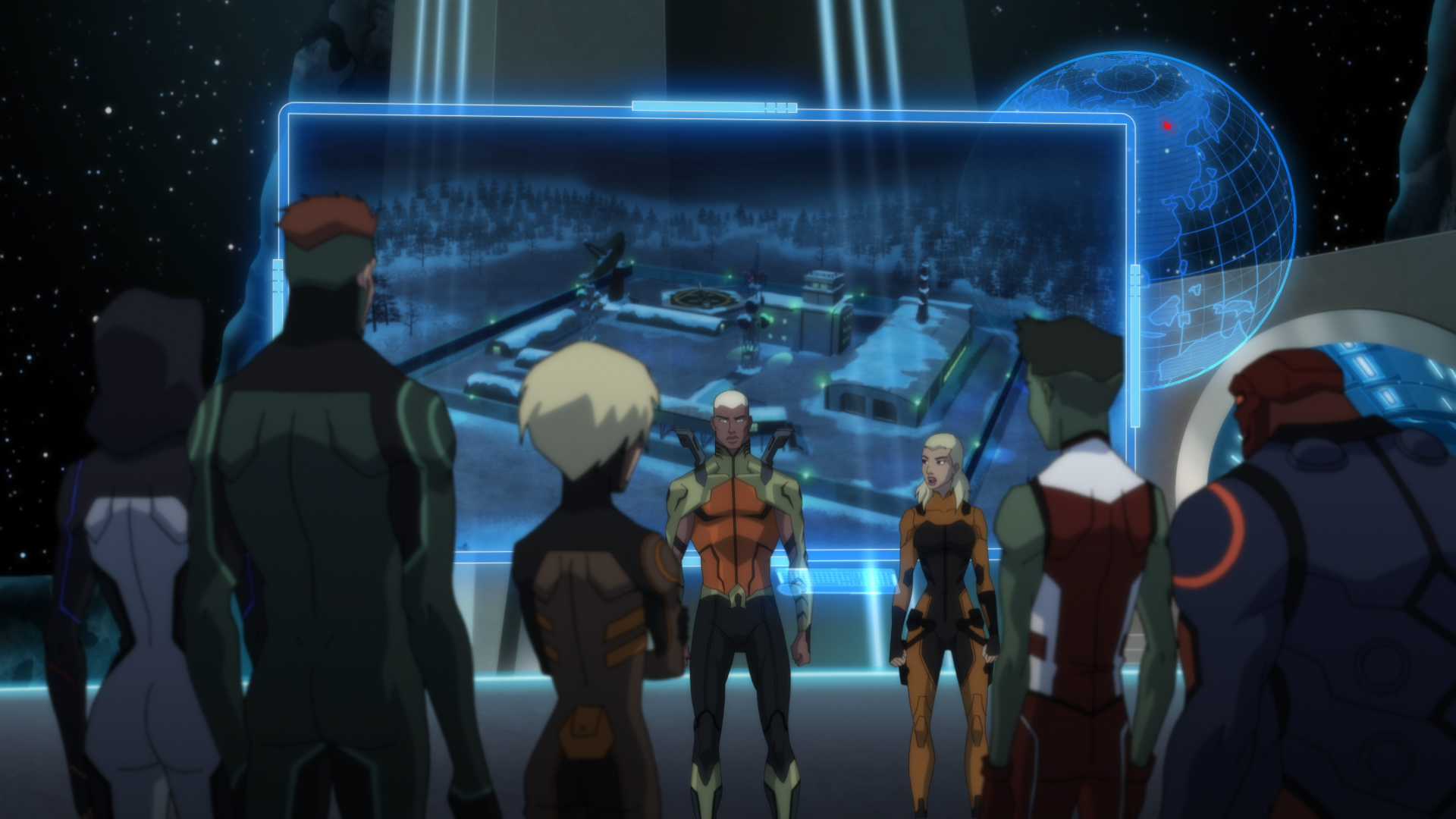 In the second episode of the batch, "Leverage," we get to see the latest recruits in action on their first covert mission. But first, there’s more trouble brewing in Hollywood, where Garfield is butting heads on-set with his studio boss, old Granny. Maybe this whole acting thing was a mistake?

Artemis, meanwhile, is feeling all sorts of conflicted feelings about Will. She gets to take her mind off it by leading Gamma Squad on a mission into Russia to investigate a possible meta-program. There, they discover the Rocket Red Brigade, a team of Russian super-soldiers with armor bonded to their bodies. Before Gamma Squad can hightail it out of their, Beast Boy spots Mallah, Black Manta and Captain Boomerang getting ready to attack the Rocket Red Brigade facility, even though they’re supposed to be in Belle Reve prison. Whoops. We all know what that means. 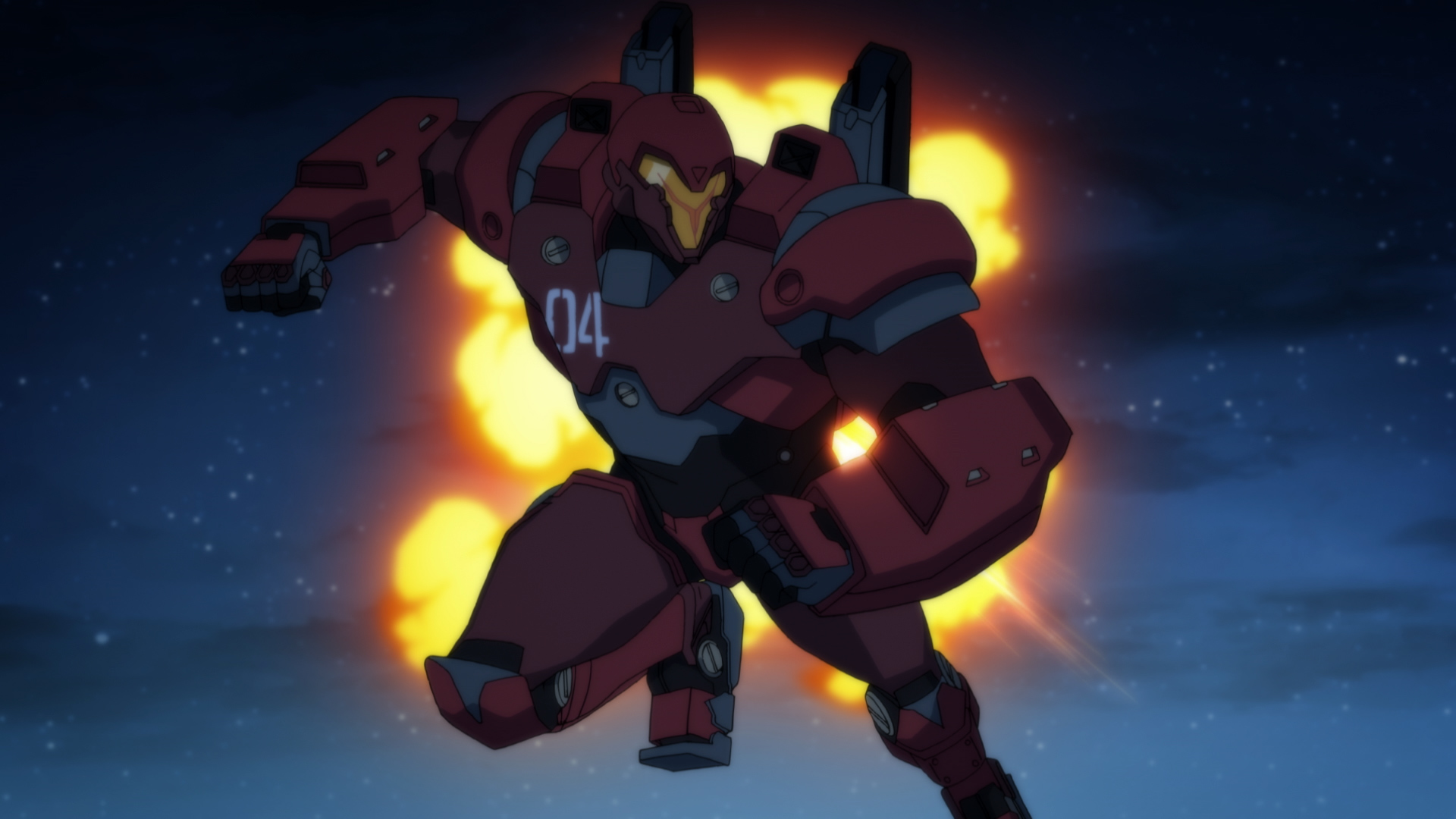 The Squad intervenes, engaging the trio in battle while the two Rocket Red Brigade troops scramble to respond. In the middle of the battle, Boomerang says something that stops Halo in their tracks, and he lands a boomerang right in their chest. While Halo recovers, the team surrenders to the Brigade, but the Suicide Squad members aren’t done yet. The Rocket Red Brigade turns out to be not much of an obstacle for them, but Gamma Squad rallies and sends the nefarious trio packing.

Back at Belle Reve, Kalder learns all about the Suicide Squad from the boss herself, Amanda Waller. So now the two covert teams are aware of each other’s existence. 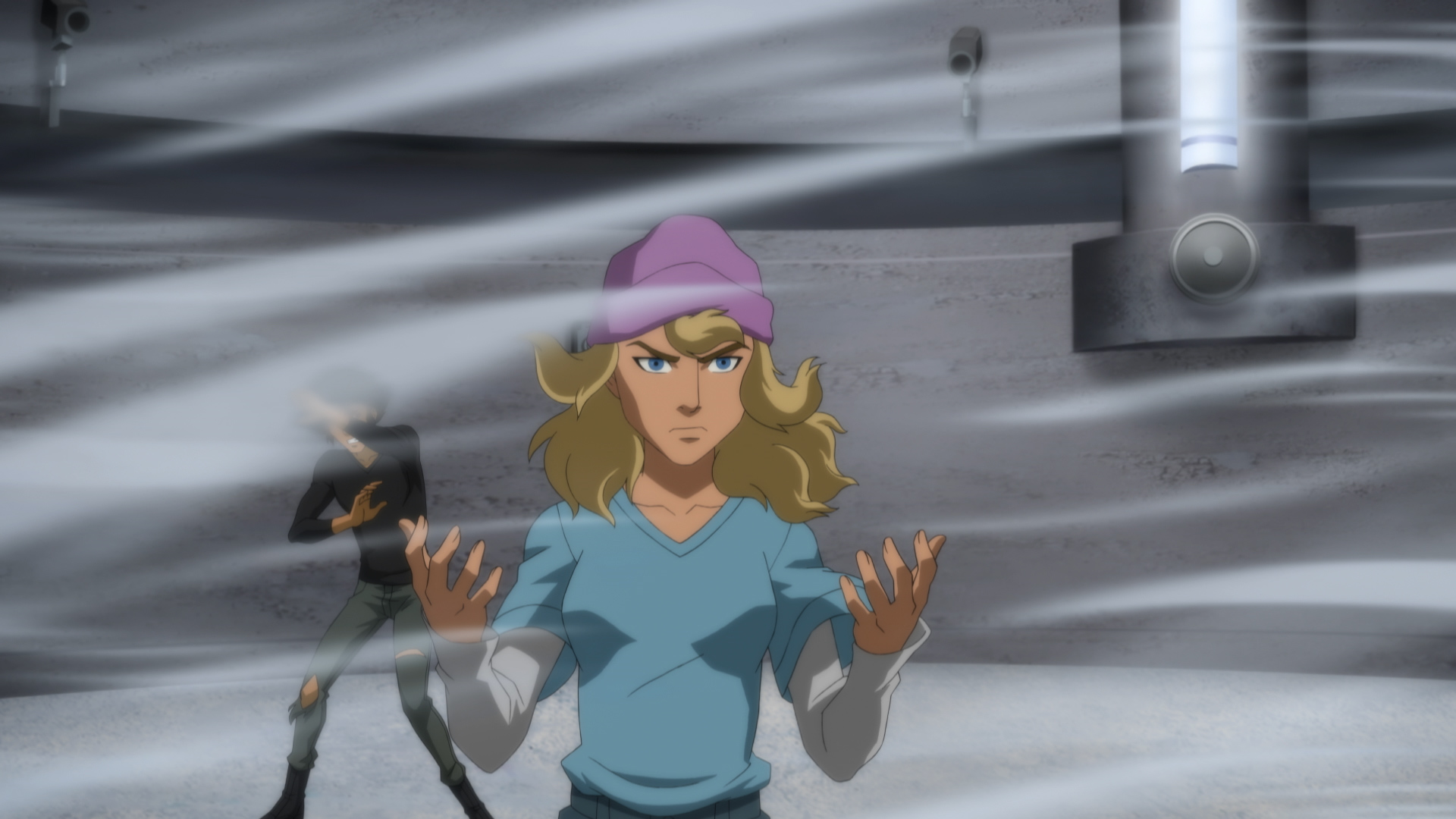 In Taos, the recently rescued meta-kids get an orientation from Dr. Dorado and his big-haired, teleporting son, Eduardo. They insist the teens are free to leave whenever they want, they’ll get counseling and training and they have the option to wear inhibitor collars if their powers bother them too much.

One particularly moody resident, Aussie wind-manipulator Windfall, seems taken in by Eduardo’s charms. But in a training session with fellow residents Mist and Livewire, Windfall loses control of her powers and nearly suffocates everyone in the room. Eduardo teleports them to safety just in time, but Windfall is convinced she needs an inhibitor collar.

Back home after the mission, Halo gets a glimpse of their life pre-Motherboxing, when, as Gabrielle, she took a bribe for helping an assassin into the compound to kill the Markovs. That’ll probably make makeout sessions with Brion a bit awkward now. 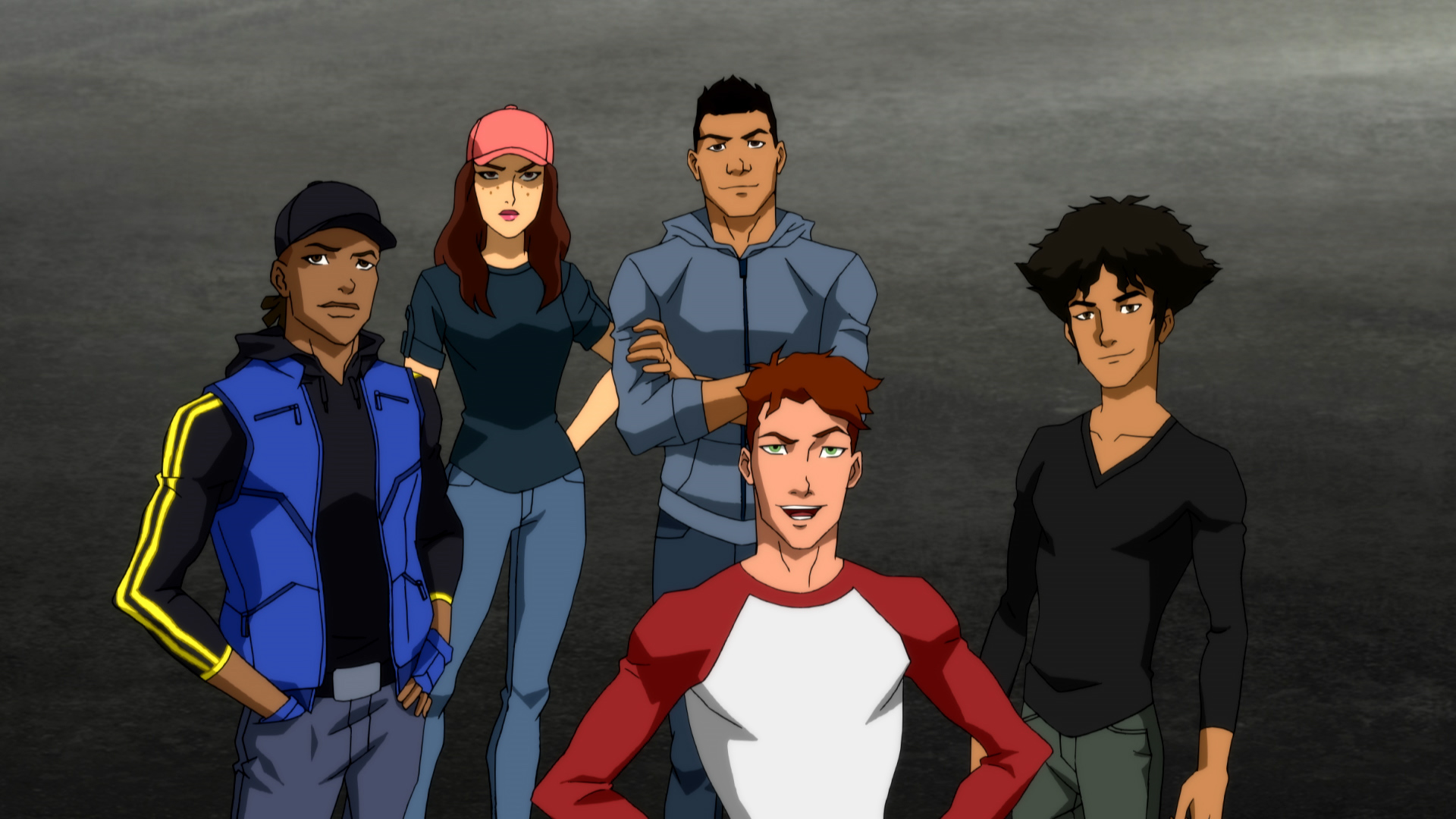 Don’t let the July 4 fireworks outside fool you, because it’s clearly Thanksgiving. Or at least it is for the ‘Young Justice: Outsiders’ team. In "Illusion of Control," celebration is in the air, from a festive home-cooked meal at Connor and Megan’s to a traditional turkey dinner at Will and Artemis’ — filled with plenty of furtive glances — to a big Harvest Festival in Taos to make the rescued meta-human kids feel more at home, courtesy of Eduardo, Bart, Garfield, Perdita, Static (who has to get a girlfriend, apparently), Blue Beetle and his girlfriend, Traci. 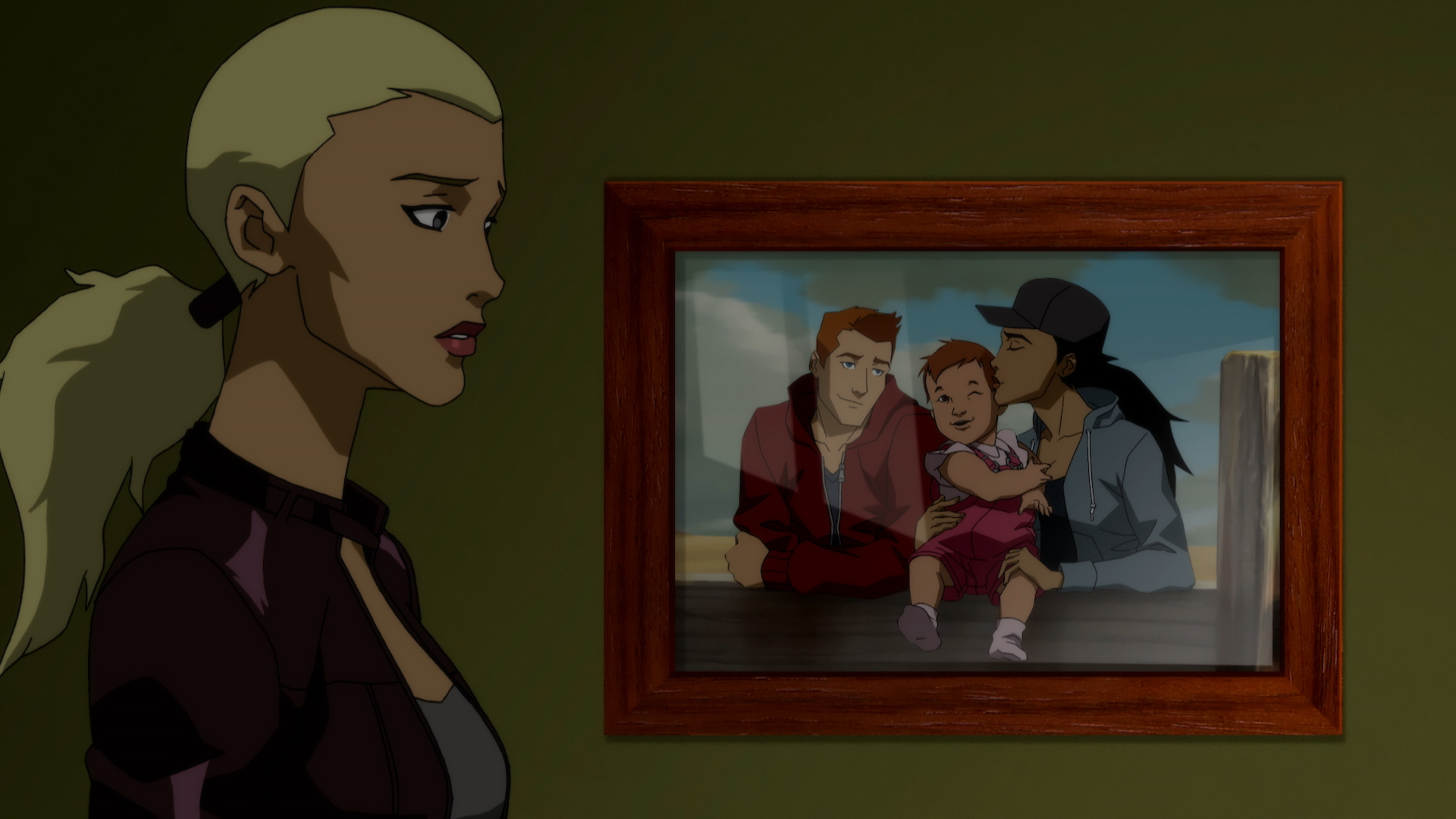 In the grand tradition of family get-togethers, no one’s Thanksgiving is going too smoothly. In Happy Harbor, Victor is sulking out in the RV about his Fatherbox-infused identity crisis, despite Forager’s best efforts to cheer him up.

In Star City, Halo can’t enjoy the holiday because of the recurring memories of betraying the Markovs. Plus there are fireworks at the dinner table when Artemis’ mom finds out about her rejoining the team. 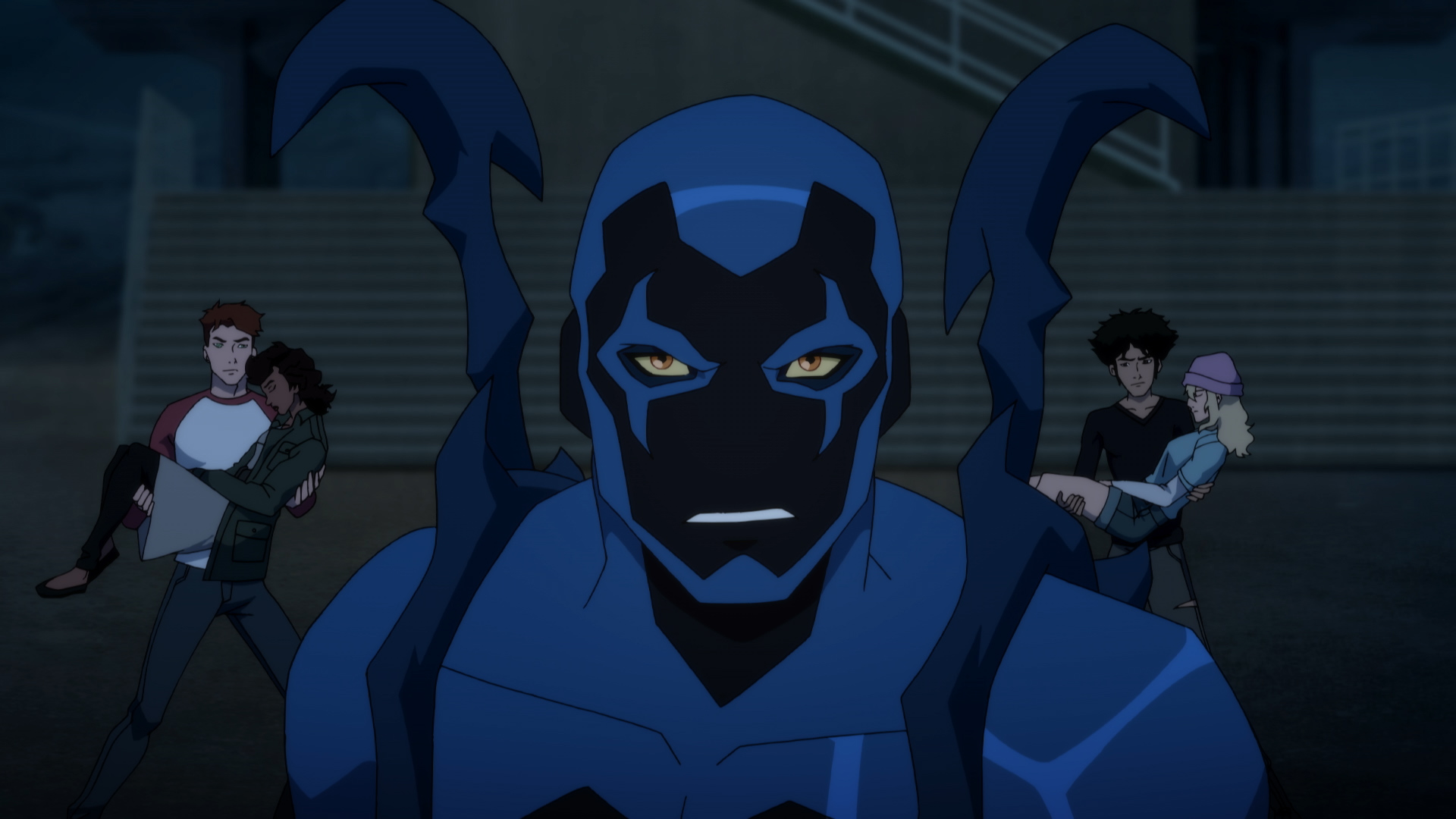 But the real action is at the Taos facility, where Eduardo is fretting over Windfall’s crisis of confidence and Garfield is chaffing at the whole covert missions thing, since he thinks the team can do more good by being public. Suddenly, they’re incapacitated by Vertigo, who kidnaps Perdita. Bart, Eduardo, Blue Beetle, Garfield and Static make chase, but they can’t get to close before being knocked out by Vertigo’s powers.

They force Vertigo’s chopper down near a pueblo and try to track them down. With a quick kick to the goodies, Perdita unveils that they’re not fighting Vertigo at all — it’s actually Psimon in disguise, accompanied by Devastation, and the Perdita abduction was just a diversion while the rest of Onslaught could re-kidnap the kids at the Taos center. Psimon says, fooled ya! They hurry back and take down Onslaught, slapping inhibitor collars on all of them. When the press arrives, Beast Boy decides to be open about the good meta-humans can do, going against that whole “covert” idea. Here’s hoping Artemis, Connor and Dick aren’t too put out by Garfield’s sudden update to their mission statement. But hey, maybe it'll help Static get a girlfriend.