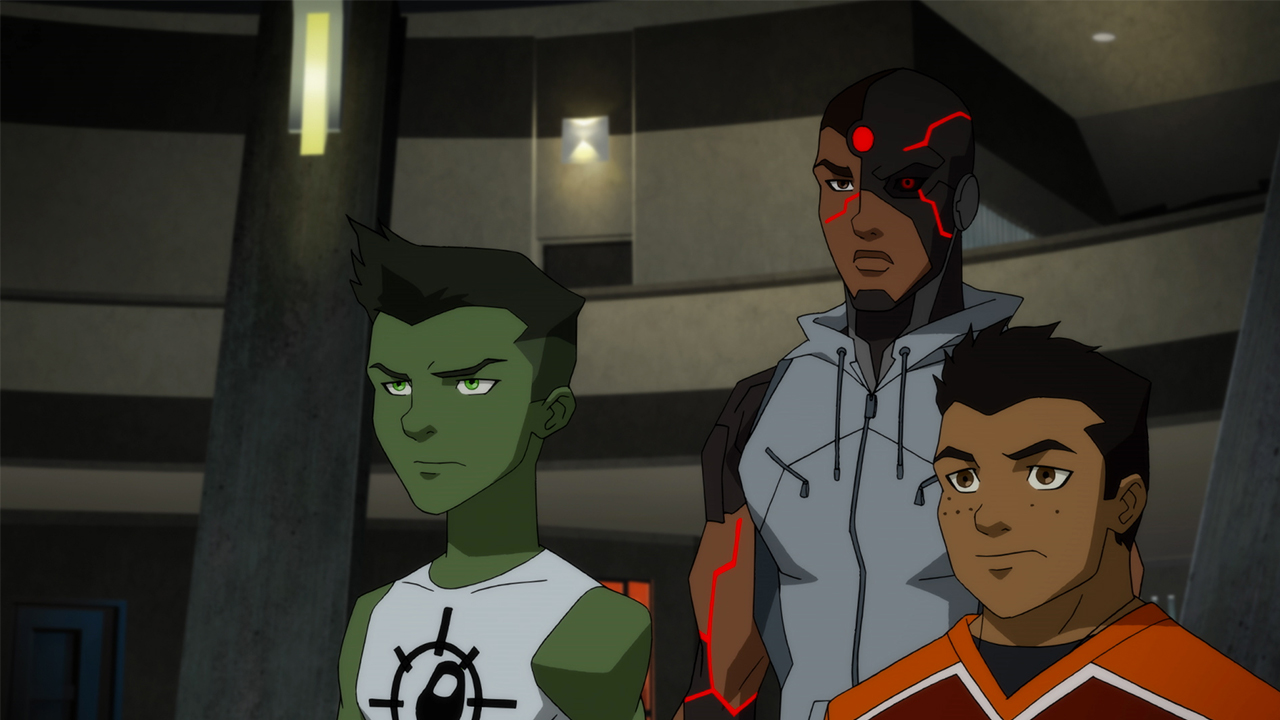 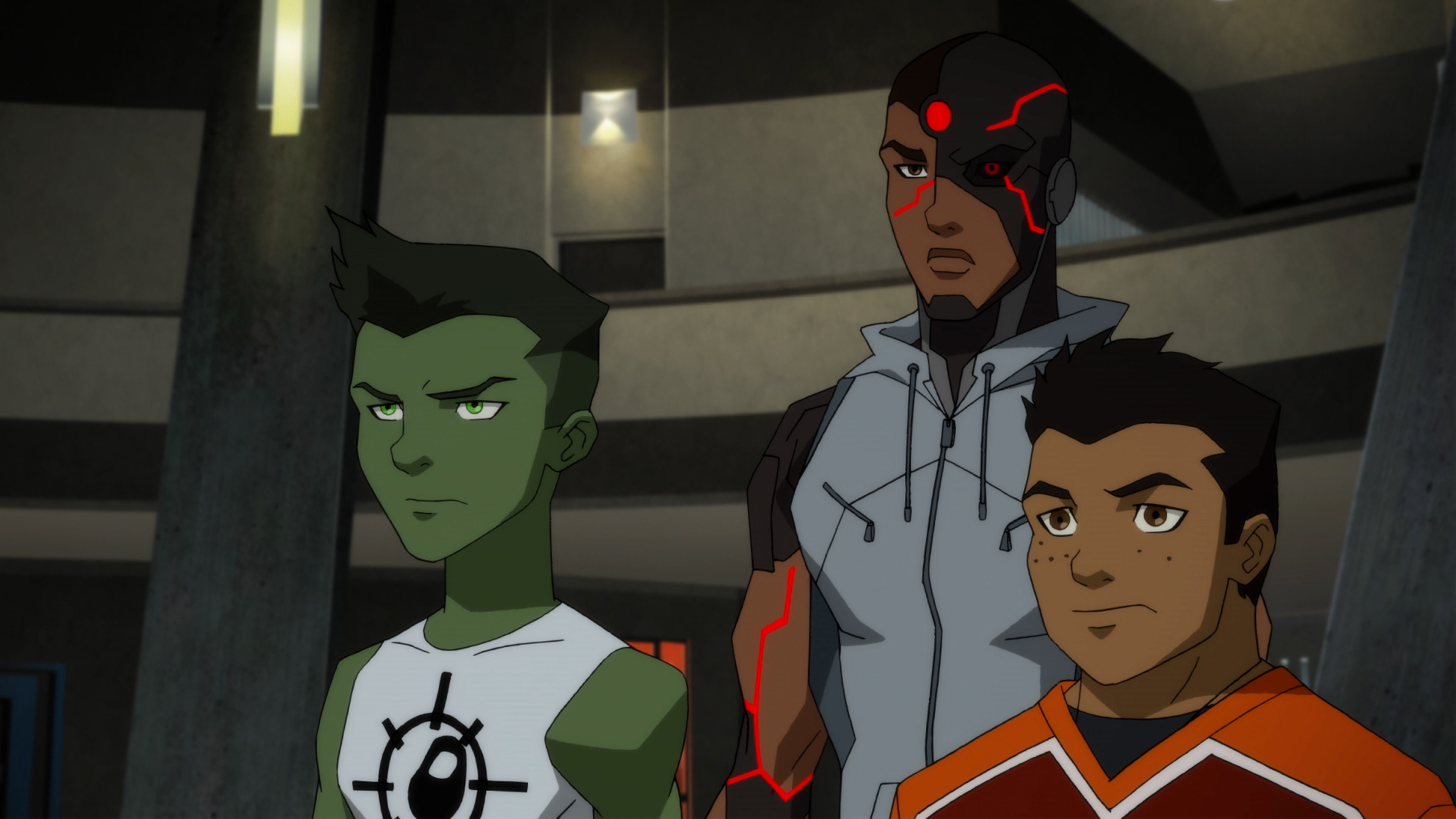 We’re bearing down on the end of the season now, ‘Young Justice: Outsiders’ fiends, with just four episodes after this one. But let’s not get ahead of ourselves. Here’s everything you need to know about the latest entry, "Antisocial Pathologies." 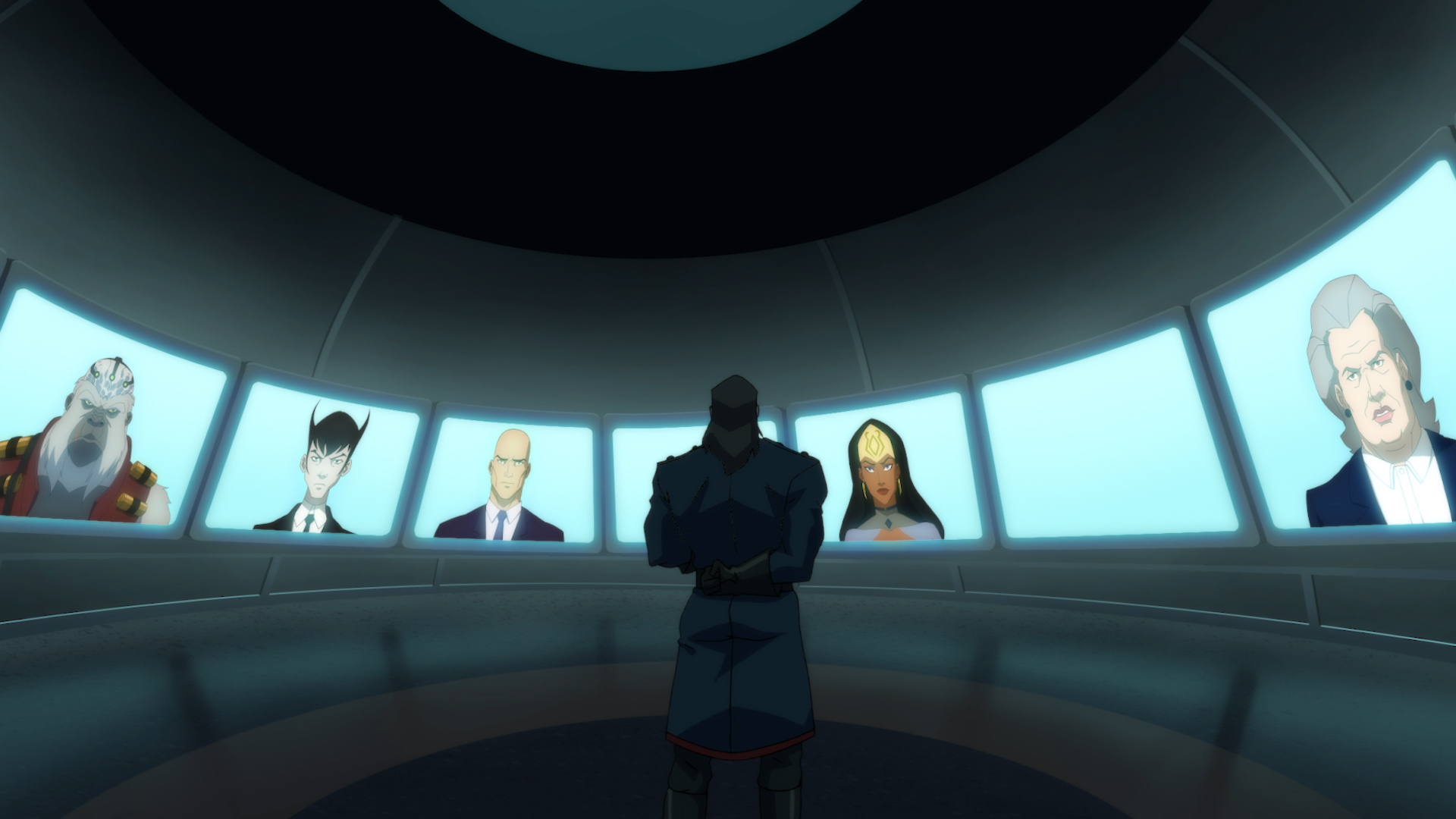 We kick things off in Western Mongolia, where a Skype session for members of the Light is going down, with Granny Goodness—in her earthbound guise of Gretchen Goode—catching her cohorts up on the rescue mission last week. Granny complains about the effectiveness of Cyborg and Halo, but the Ultra-Humanite assures her he has plans for capturing Halo -- you know, because Helga Jace is secretly working for him.

Speaking of secret evil mentors, Tara is out for a late-night stroll through the abandoned back alleys of Hollywood -- totally normal teen behavior, of course -- when she’s ambushed by Deathstroke. Turns out he’s also concerned about Cyborg and Halo, and he wants answers from his little blonde mole. 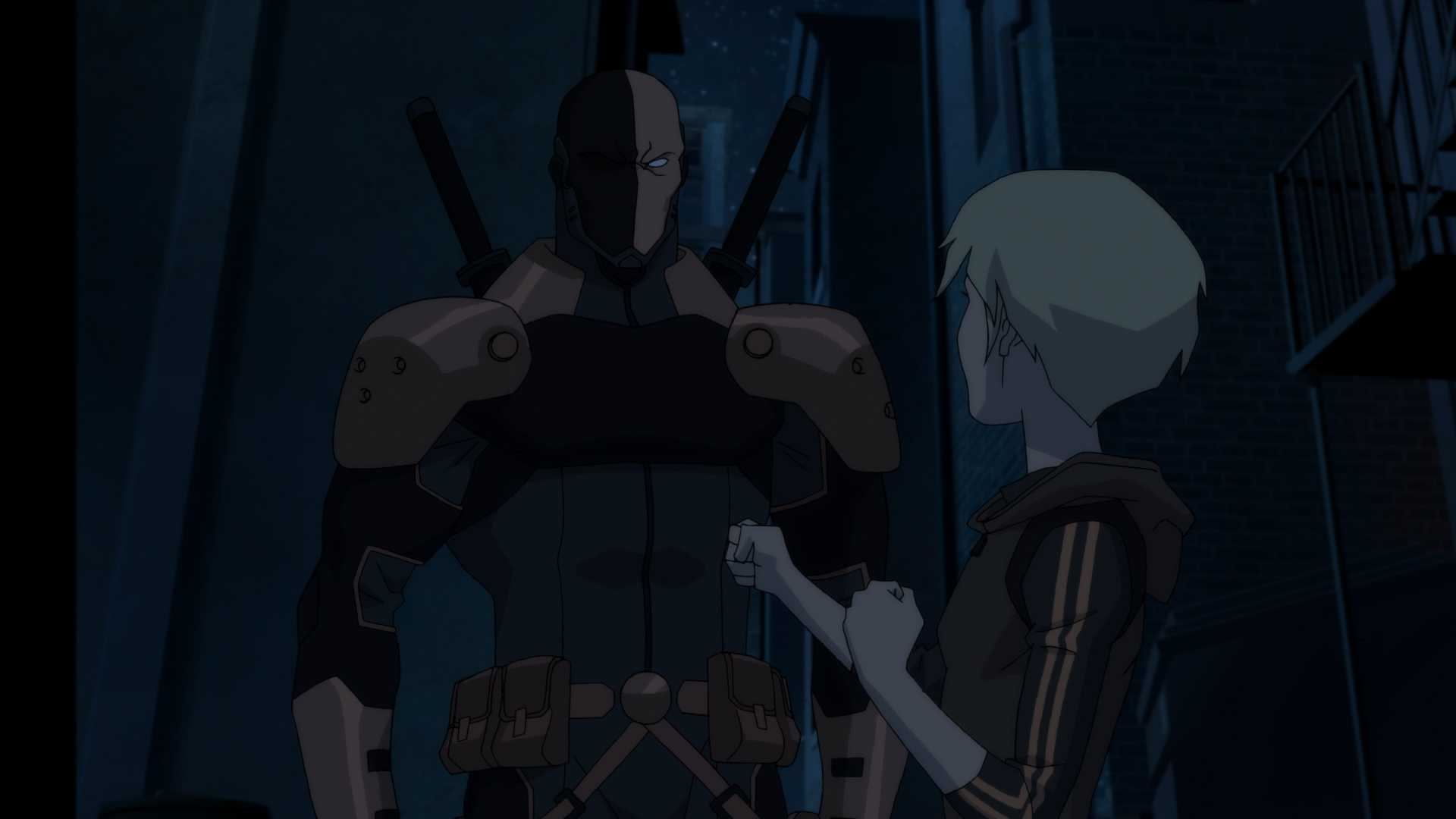 Slade accuses Tara of going soft on him while living at the Hub, but she insists she’s still hard, yo. She’s still gathering intel, she insists, but Deathstroke sees right through her. He does the whole classic abuser routine and tells her no one cares about her except him and he’s always been straight with her and come on, he only hits her so she’ll learn. Then he passes something to her to take ‘just in case,’ but we don’t get to see what it is just yet.

Upstairs, meanwhile, Dick is on the table still fighting off the effects of his imprisonment in Granny’s torture pit. No one knows why Black Lightning made such a speedy recovery while Nightwing is stuck with a skyrocketing fever and swelling brain, but then that’s life, I guess. No one’s sure how to help him.

Back in Western Mongolia, a Boom Tube materializes, so naturally Vandal Savage walks right into it -- and right up to Darkseid standing on a super-dramatic outcropping in Apokolips. But then, Apokolips doesn’t really have any subtle architecture, so let’s just call it an outcropping. They don’t say anything just yet, but instead have a staring contest. 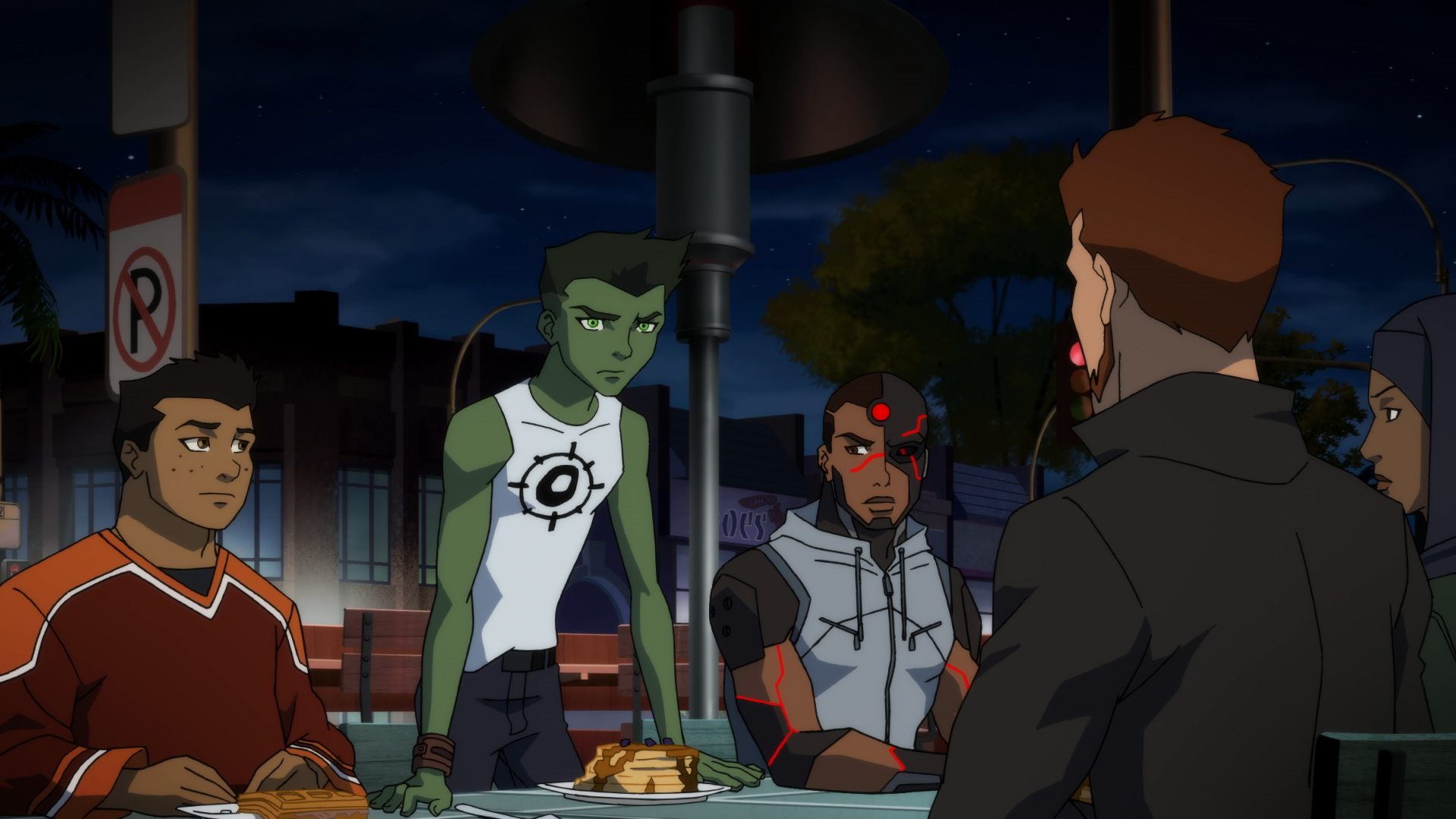 Meanwhile, Courtney Whitmore is interviewing a colorful trio of heroes called Infinity, Inc. -- which… sure -- who just want to inspire people. The broadcast makes Brion lose his appetite, which is a shame because the rest of the team is enjoying some tasty looking pancakes at some hot L.A. all-night brunch spot. Brion thinks they’re stealing the Outsiders’ thunder, but Garfield takes it as a compliment. Halo helps him look on the bright side, and he says he’d be lost without her and -- whoops -- there goes her appetite. Secrets really are the best diet.

While Dick cools down under some blocks of ice, Bruce asks for a word in private with Tim, Oracle, M’gann and Kaldur. The assembly sends Jefferson on a flashback spree about who’s in the League and who isn’t and how much he doesn’t trust people -- and something just clicks. He finally figures out that Batman, the League and M’gann’s covert team are all working together. Real smart, that guy.

He connects the dots and eurekas that Batman, Robin, Ms. Martian, Oracle and Aquaman have been secretly pulling the strings for everything they’ve been doing, and he is not pleased. He declares that everything is a lie as Tara watches from the balcony, grinning conspiratorially. But before she can do anything, Helga snaps a control disc on the back of Tara's neck that puts her in a hypnotic trance.

Next thing you know, she’s leading a not-at-all hypnotized Violet to a car, despite Violet suggesting maybe now’s not the best time to be going anywhere. Brion and Tara are in the backseat, clearly not themselves. Helga tells Violet that she and her mentor have found a cure for her condition and that she filled Brion and Tara in on the whole situation and everything’s super-dandy now. Violet is too overwhelmed by relief to notice that her boyfriend is talking to her like a creepy meat puppet. 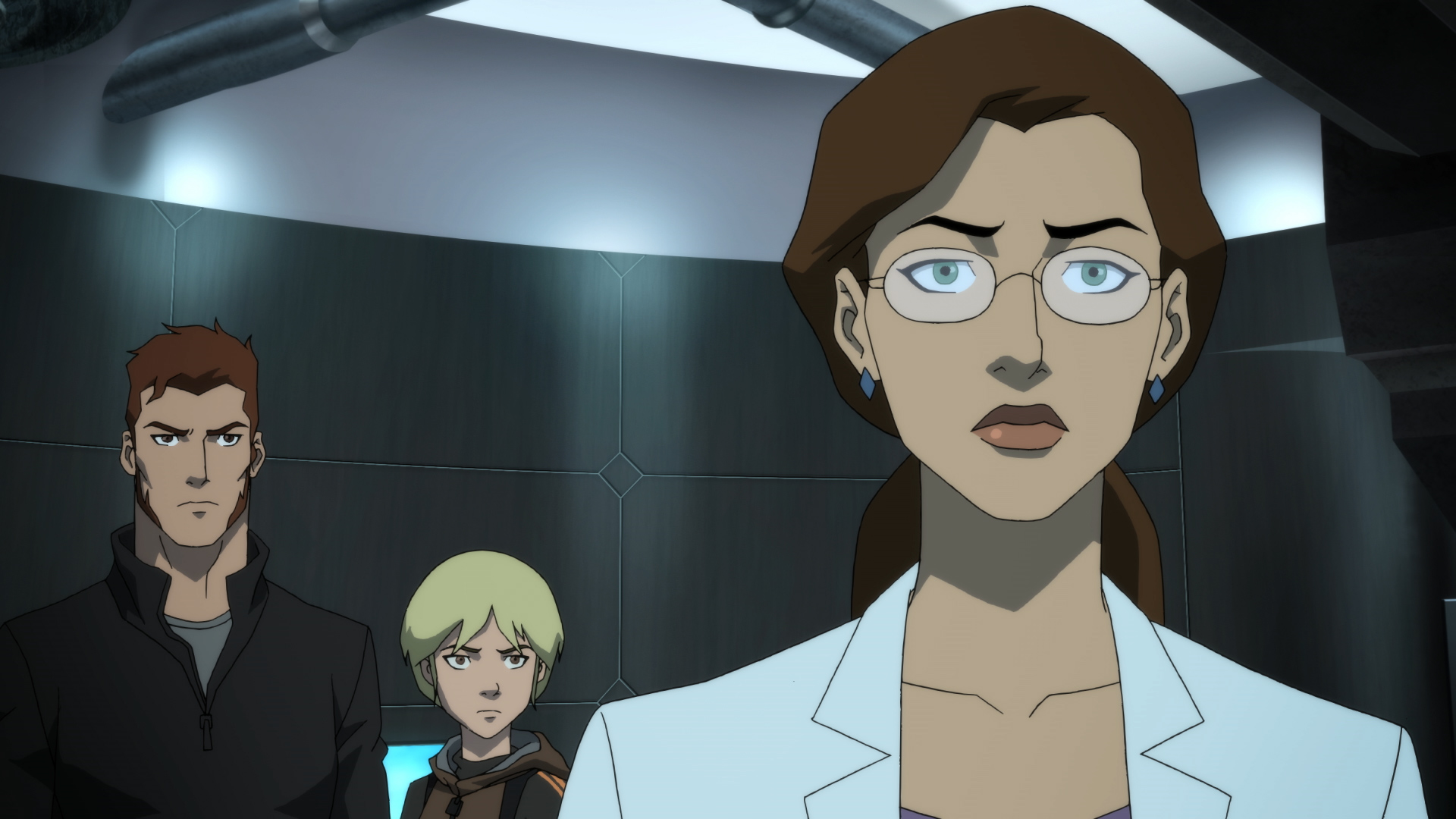 She takes them to some creepy lab and preps Violet for a procedure, saying her mentor will be there soon. And wouldn’t you know, in walks the Ultra-Humanite and Granny, who cerebral-leashes Violet before she can put up a fight. Helga is all, "I fulfilled my part of the plan, let me take Brion and Tara and skedaddle," but Granny’s changing the deal because that's what super-villains do.

Granny warps them all to the X-Pit and shoves Halo out into it, where her healing powers don’t seem to be doing any good. Granny giddily announces that the Ghost Dimension has repolarized the Motherbox power emanating from Violet’s flesh, meaning she’s the key to solving the Anti-Life Equation. Which sounds… not good.

Helga says what we’re all thinking and asks for an explanation to what this whole equation thing is, and Granny is happy to elucidate: Life minus free will equals Anti-Life. Obviously. Then she shoves Helga out into the X-Pit to test the equation. Much screaming ensues, until Halo zaps her and calms her down, which seems to confirm everything for Granny.

Helga then reveals -- at Granny’s command -- that she considers Tara and Brion her children after their meta-human transformations, which were her ideas. She also tried to turn human Gabrielle into a meta-human by killing her to spur any latent metagene. Helga thought she had succeeded when Halo's powers manifested but now that she realizes that Violet is essentially a Mother Box in human form, she's disgusted by her.  Basically she’s filled with a whole of twisted maternal feelings for these kids who are now feeling rather betrayed by the whole thing. Short version: Helga is nuts. She seduced Jefferson to get back to her "kids," then made up Violet’s terminal condition because she didn’t want her dating Brion anymore. Oh, and she agreed to hand Violet over to the Ultra-Humanite in exchange for a lab where she can keep creating more meta-kids. 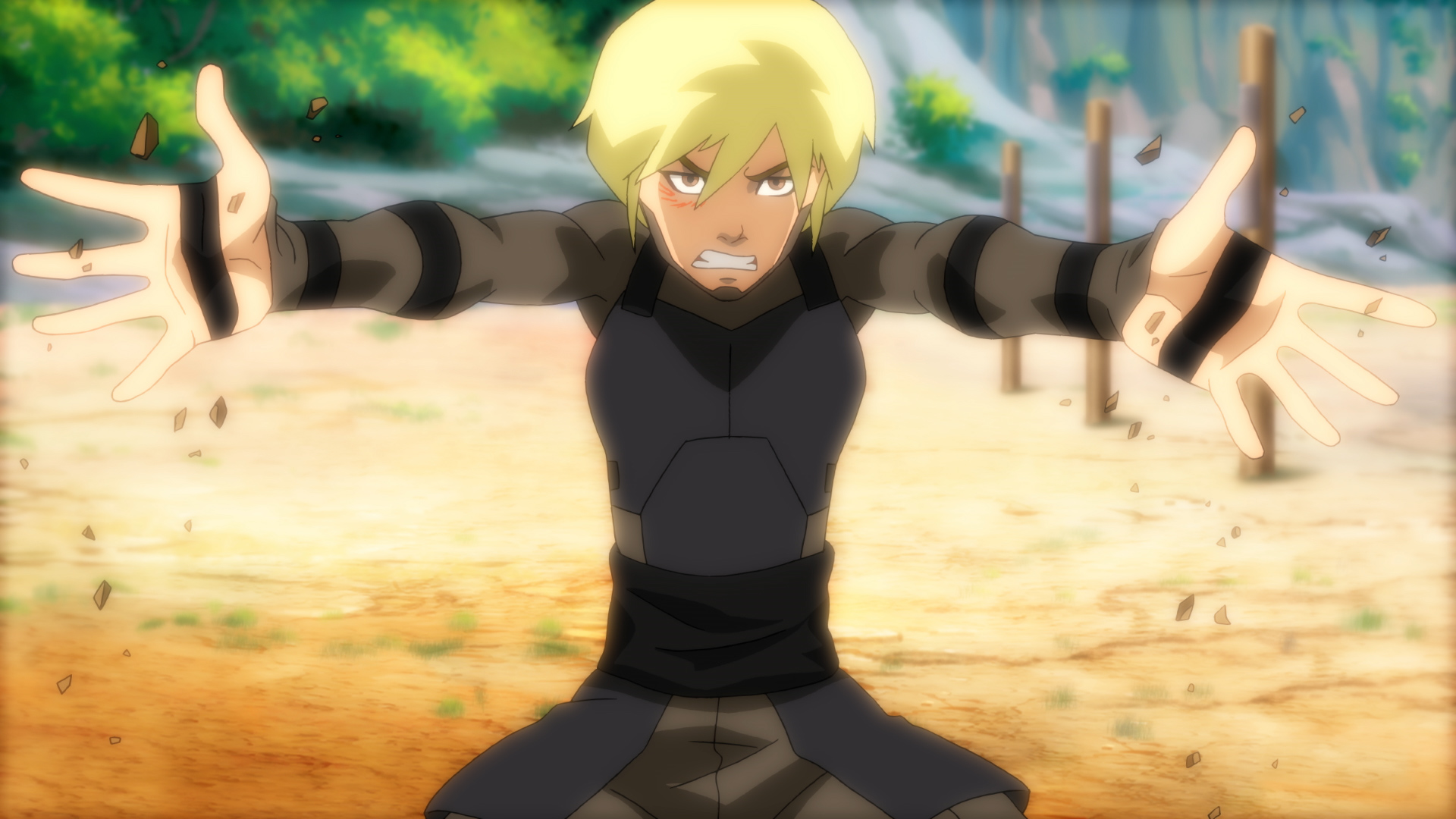 Back up out of the X-Pit, Granny confirms that Helga is now under her control. She’s ready to leave the Light behind and deliver Violet to her master so they can control anybody, which doesn’t sit well with the Ultra-Humanite. But before they can get squabbling, Tara reveals what Deathstroke slipped her before: a chip that blocks the control disc Helga put on her. Clever! She frees Brion and they go attack, but everyone zaps themselves away -- Granny with Violet and the Ultra-Humanite with Helga. Bye!

Back in the penthouse, Cyborg and Forager watch from the couch as various arguments happen all over the place. Garfield, in particular, is fuming as he learns that all of the Outsiders’ greatest accomplishments were set up secretly by this secret society of superheroes. But hey, at least the Condiment King was a real, pure victory.

Jefferson’s chat with Bruce and Kaldur is going even worse. In fact, he hasn’t non-yelled anything in a while. But then Alfred helps a weak and sweaty Dick out into the room so that Dick can assure Jefferson his ire should be directed towards him, not the others. But Jefferson isn’t hearing it, and he’s totally out of there. Before he can leave, though, Tara and Brion skulk back in without Violet or Helga. 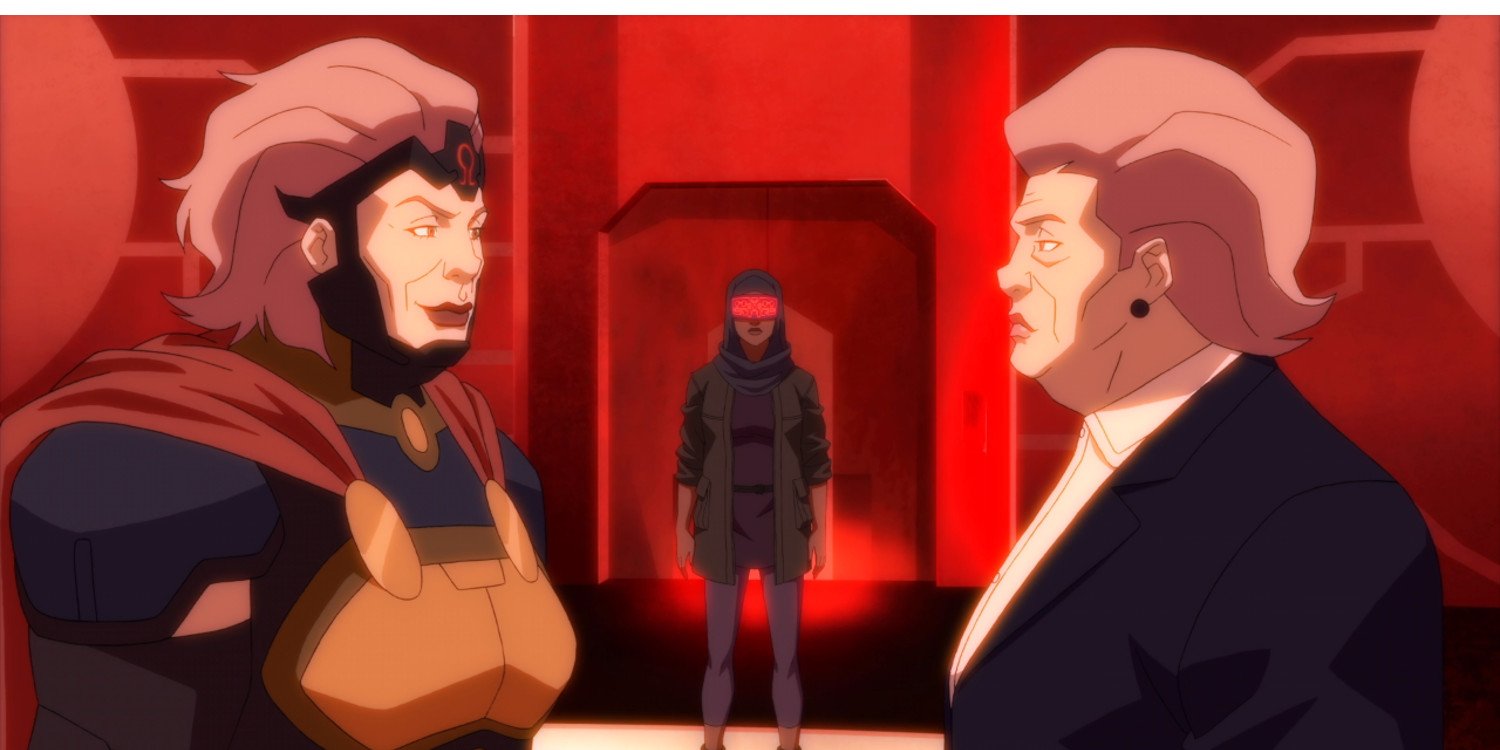 During another Light conference call, Deathstroke reveals that giving Tara the blocker chip was all part of the plan so she and her brother could believably escape. Ultra-Humanite lets them in on the whole Granny taking Halo to Darkseid deal, and at the mention of the Anti-Life Equation, Vandal snaps his tablet. I guess he’s not too pleased by the turn of events? Speaking of, up on the Orphanage, Granny, still in Gretchen Goode mode, presents Halo to...Granny Goodness in full Apokoliptan garb! Twin? Clone? Doppelgänger? Some weird Apokolips version of 'Single White Female'?

Back on Earth, Tara and Brion fill everyone in on Helga’s deception, so a completely betrayed and disgusted Jefferson just leaves on his own. And Tara places a call to Deathstroke confirming that she’s totally on his side and at his command. At least she finally made a decision? Yay?

Are Granny Goodness and Gretchen Goode really two separate people? Tell us what you think in our Community!