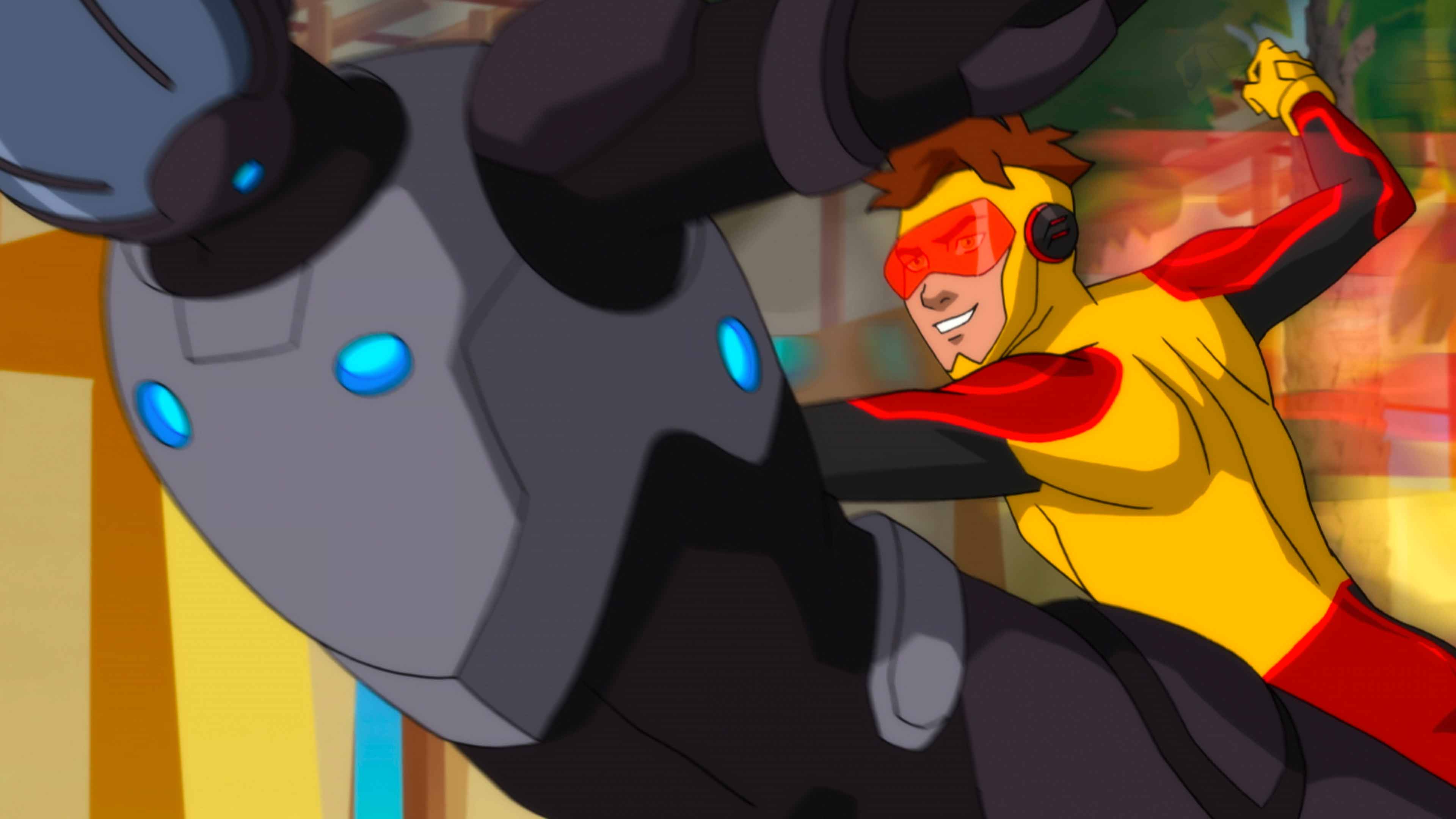 In the latest episode DC Universe's ‘Young Justice: Outsiders,’ the titular team tangles with its first real super-foe, and the lines between Outsiders, Justice Leaguers, and covert team members seem to blur. Plus, some major revelations finally come to light, and all the Outsiders’ missions turn out to be set-ups. Yup, there’s a lot going on. Here’s everything that happened in this week's episode, "Elder Wisdom"...

We kick things off with a special report from everyone’s favorite cable news blowhard, G. Gordon Godfrey, coming to us live from the climate summit hosted by Lex Luthor and the U.N. in Bwunda.

Luthor explains that the locale for the summit has absolutely nothing to do with the fact that a hotel he owns in Bwundasa is playing host — perish the thought — but because the countries perma-leader, General M’Barra, just gets that global warming is everyone’s problem. Because in this fictional universe, not even super-villains or dictators are nefarious enough to deny climate change. So score one for Lex Luthor.

Upstairs at the palatial Luthor-owned resort, Troia is intergalactic Skyping with Wonder Woman about her lengthy time away and how Troia is skipping out on the photo op with Lex because obviously. Speaking of said photo op — which an iguana-shaped Beast Boy is keeping an eye on — it’s going great until it’s not, as a flurry of poisoned arrows scream through the air, nipping the Atlantean ambassador in the neck and knocking him out cold. 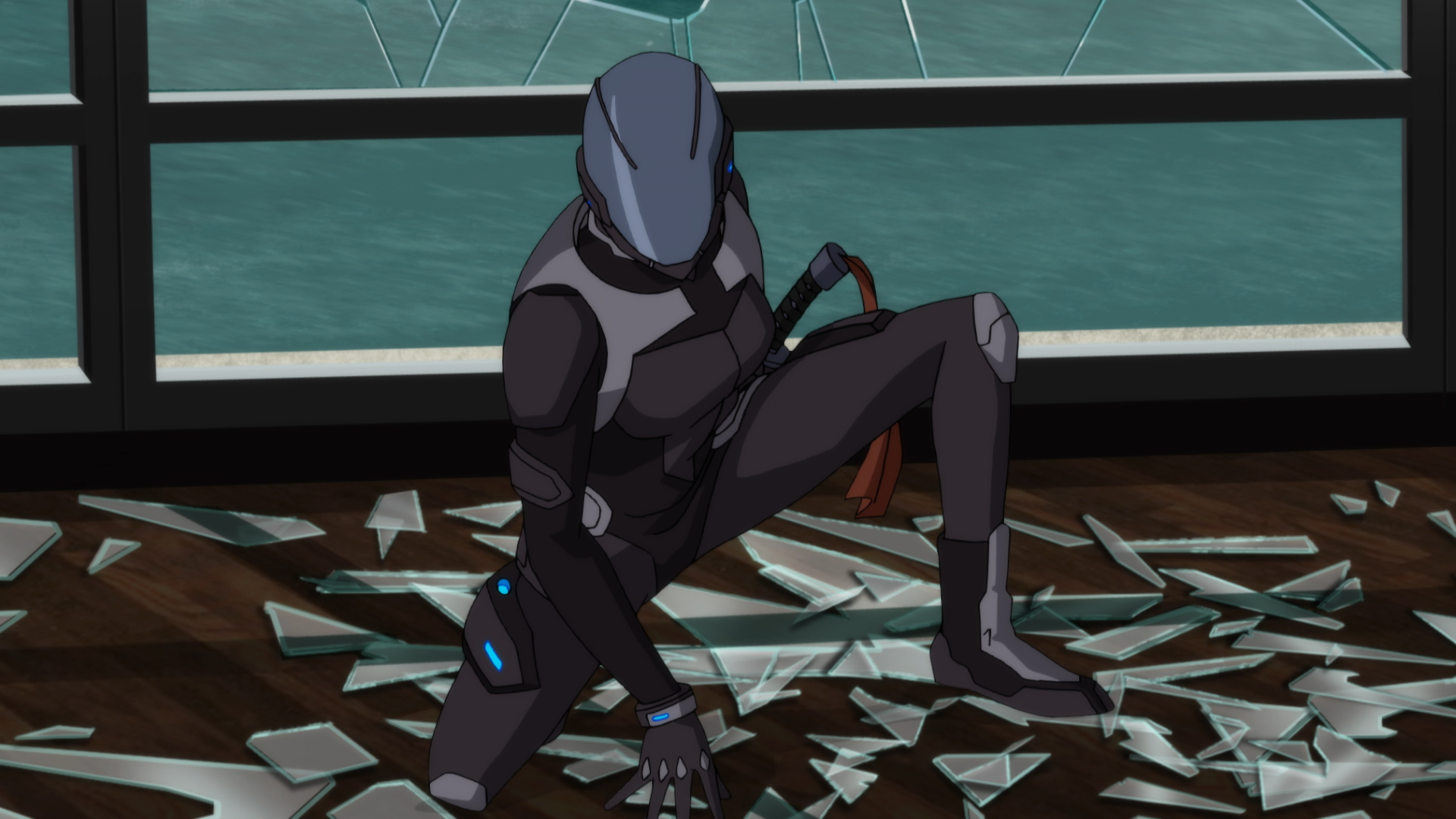 Upstairs, a mysterious female figure approaches the door to Troia’s suite and uses some sort of mind-control powers to debilitate her enough for an accomplice to crash through the window and knock her out as well through the door. Wonder Woman, connected via laptop, is obviously concerned. Luckily, the Outsiders are on the case — or the covert team is. It’s confusing. Into the room warp Violet and Tara, who face off against the sword-wielding masked female soldier in the suite.

Down at the pool, several more similarly masked female mercenaries descend, announcing themselves as acting on behalf of the Bwundan Independence Front — though we also would have accepted the Independent Front of Bwunda, but whatever. Their issue? That the U.N. has legitimized General M’Barra by hosting their summit there. It’s tense. Super-tense.

That is, until, Beast Boy calls the Outsiders into action as Luthor and the dignitaries take cover. Kid Flash is there, and Wonder Girl teleports in with the help of Eduardo, who officially announces his superhero name: El Dorado. You know, the golden one. And we appreciate his humility.

Upstairs in the hotel, a maid reveals herself to be Miss Martian in disguise. (Seriously, whose mission is this?) She whips up some mind powers of her own and takes on the lady soldier outside Troia’s suite, where Tara and Violet emerge victorious — but not before the sword-wielding resistance fighter slashes Violet’s throat. She mends herself, but we know that it’s going to cost her, based on what Dr. Jace said in the last episode. 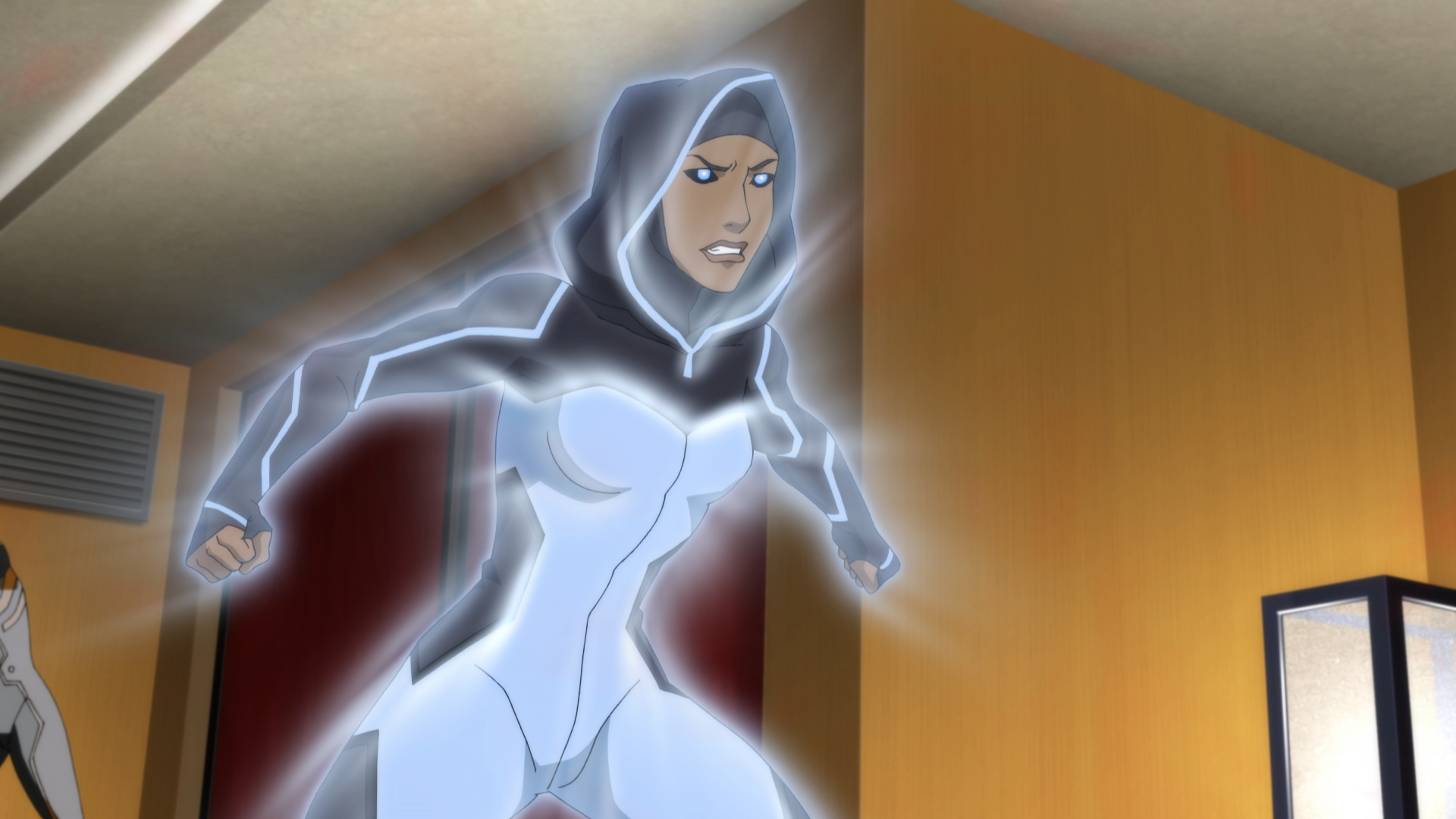 Out in the hallway, Miss Martian discovers another Light-esque mind-control disc on the neck of her adversary.  She smashes it and incapacitates the soldier, which wakes up Troia, who is able to join the fight. Downstairs, the Outsiders are doing fine, but Kid Flash gets injured in the melee. And then actual Flash appears, to tie things up with a nice bow and save Godfrey from a stray arrow.

The incursion subdued, everyone’s wondering why the Flash is there, and Luthor announces that he called in the League — with M’Barra’s permission — to handle the ruckus, supposedly proving his system works and that the illegal Outsiders are unnecessary. Way harsh, Lex.

The Outsiders and the covert team retreat, getting some answers out of one of the mercenaries, Lia, on the way. She insists she had no control over her actions. She confirms Garfield’s suspicions that the whole thing was a setup. And speaking of! Lex is at that very moment checking in with Lia’s compatriats on their private jet. They’re worried that they failed since not enough people died, but Luthor assures them that the main objective was defaming the Outsiders. It was a double-cross! And Luthor insists the heroes are playing right into his hands.

The Outsiders land in Taos, where Violet is still ignoring texts from Brion and dodging questions from M’gann, who just wants her to talk to someone. Until she does, M’gann is benching her butt. And honestly, not a terrible idea, considering the whole "her powers are killing her" thing. 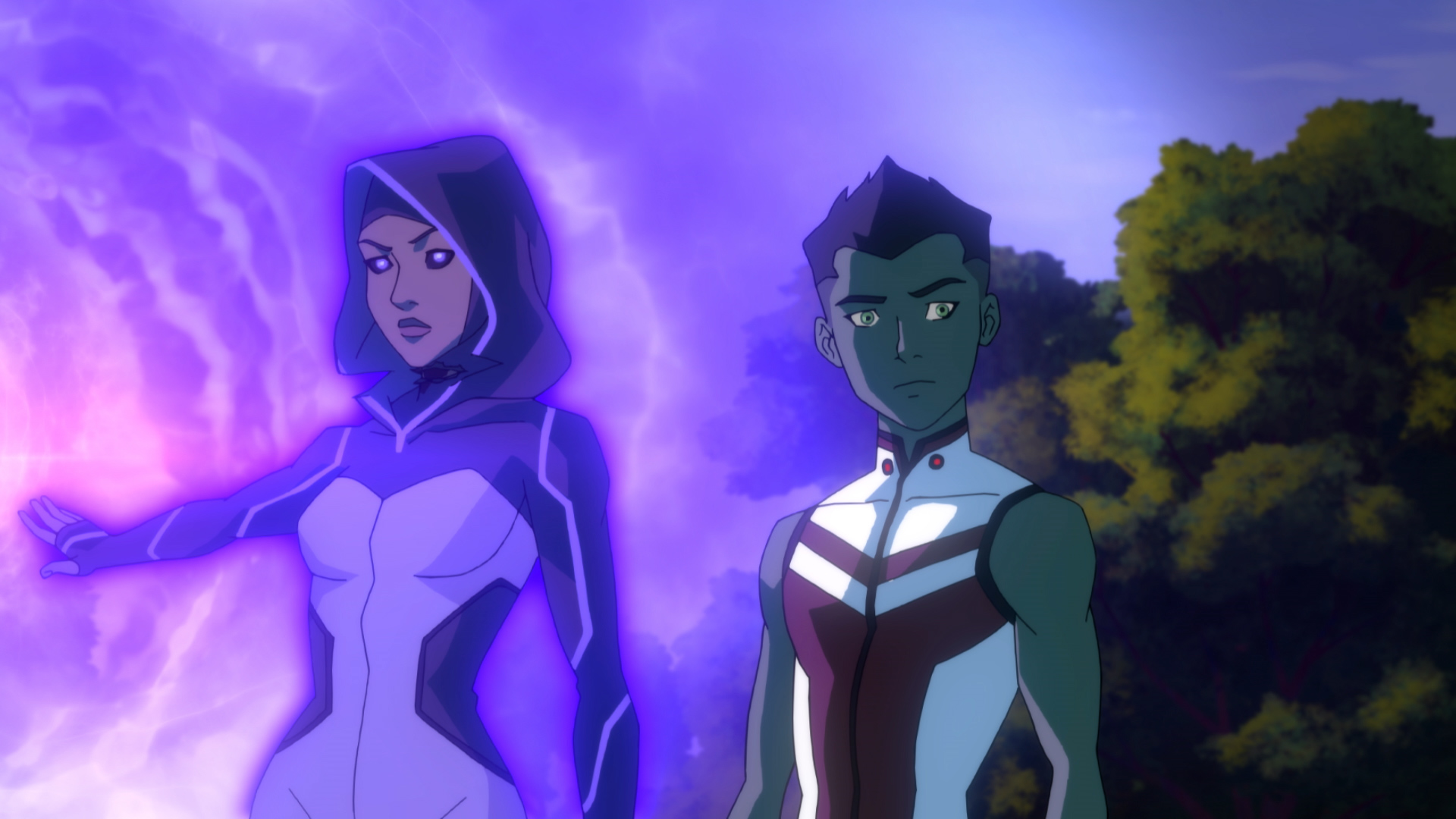 Speaking of benching, Eduardo’s dad watched the mission on TV and is not happy with his son being a part of it all of a sudden. Because basically he hadn’t really considered that being on a super-team meant his son would be put in harm’s way, which… is really more on him than anyone else. He wants Eduardo off the team, but Eduardo is not really on board with that idea. The Outsiders storm off together because teenagers, basically.

Back at the Hub, Helga informs Violet that she and her mentor are no closer to finding a cure. Brion comes up and asks her what’s up with her, and she flashes through her big three issues — namely, that her former self aided in the assassination of Brion and Tara’s parents, that her superpowers are actually killing her and that she made out with a girl last week behind his back. Violet chooses to go with the confession behind Door No. 3 and admits to Brion that she played tonsil hockey with Harper Row. And he forgives her right on the spot! What a mensch.

Emboldened by how well that went, she decides to call Tara in and finally reveals that Gabrielle played a role in the death of their parents. This one… doesn’t go over as well. Brion stomps off, silent, and Tara heads straight out and texts more Outsiders insider info to Deathstroke. So much for last week’s seeming change of heart. But a big revelation about your parents' murder tends to do that, we guess.

Meanwhile, it’s time for a parent/guardian downer party, as Eduardo Sr. shows up with Jay Garrick and Wonder Girl’s mom, all of whom want their kids to cut it out with the Outsider-ing. Beast Boy pulls up a swell mission to tackle in Ireland, but only the legal adults — and Beast Boy, an emancipated minor — are allowed to go. So he, Static, and Blue Beetle take off to handle the threat while Kid Flash, Wonder Girl, and El Dorado persuade their parents/guardians that what they’re doing as Outsiders is important. The parents agree — but not before Eduardo Sr. can throw in a quick “who/whom” correction, because proper grammar is just as important as full reconciliation. 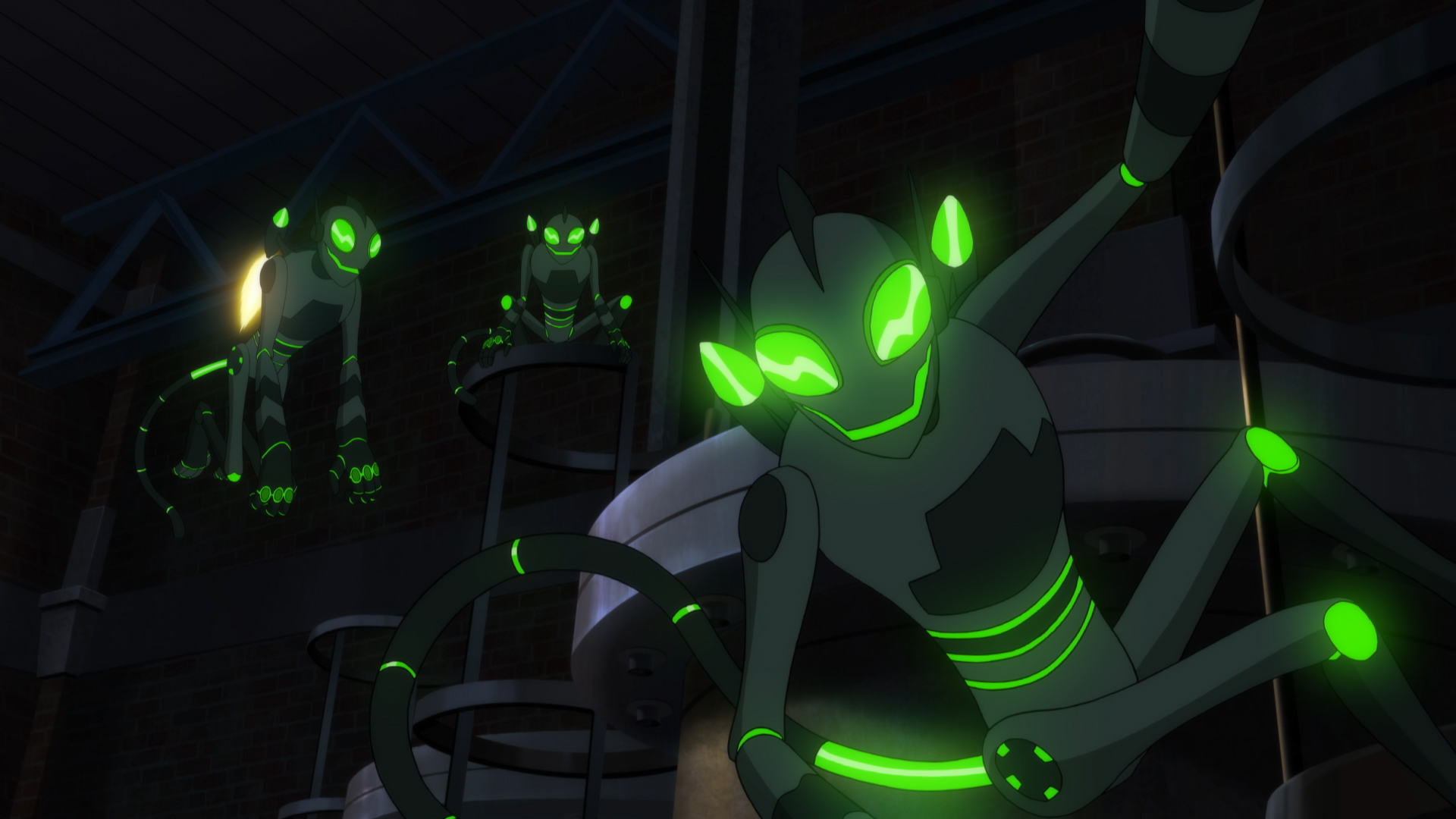 In Ireland, the Outsider trio makes quick work of Anthony Ivo’s evil monkeys and Luthor’s spider-bots, and maybe their easy victory should’ve raised some red flags, because as it turns out the whole thing was set up by Batman and Oracle in the Batcave. So much manipulation! Can’t these kids trust anyone? Only Wonder Woman seems concerned with this turn of events by the League.

Back on Godfrey’s show, Lex proposes a new superhero registration to deal with all these vigilante teens, but even Godfrey himself is no match for the sway of public opinion, and he insists Luthor is out of touch and should get behind the Outsiders. And that’s just what he plans to do.

The episode ends with Violet, in her room, cryptically writing a note out on a pad. That… can’t be good.

What do you think Lex is planning to deal with the Outsiders? Let us know in our Community!