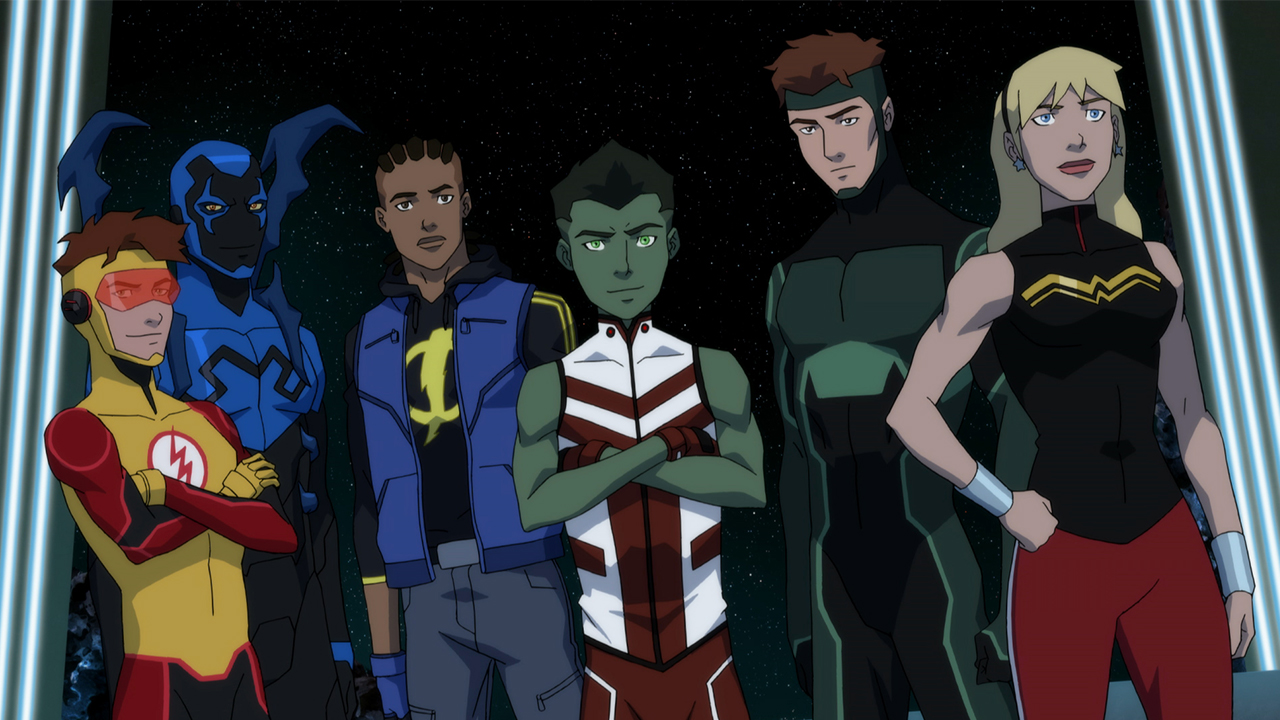 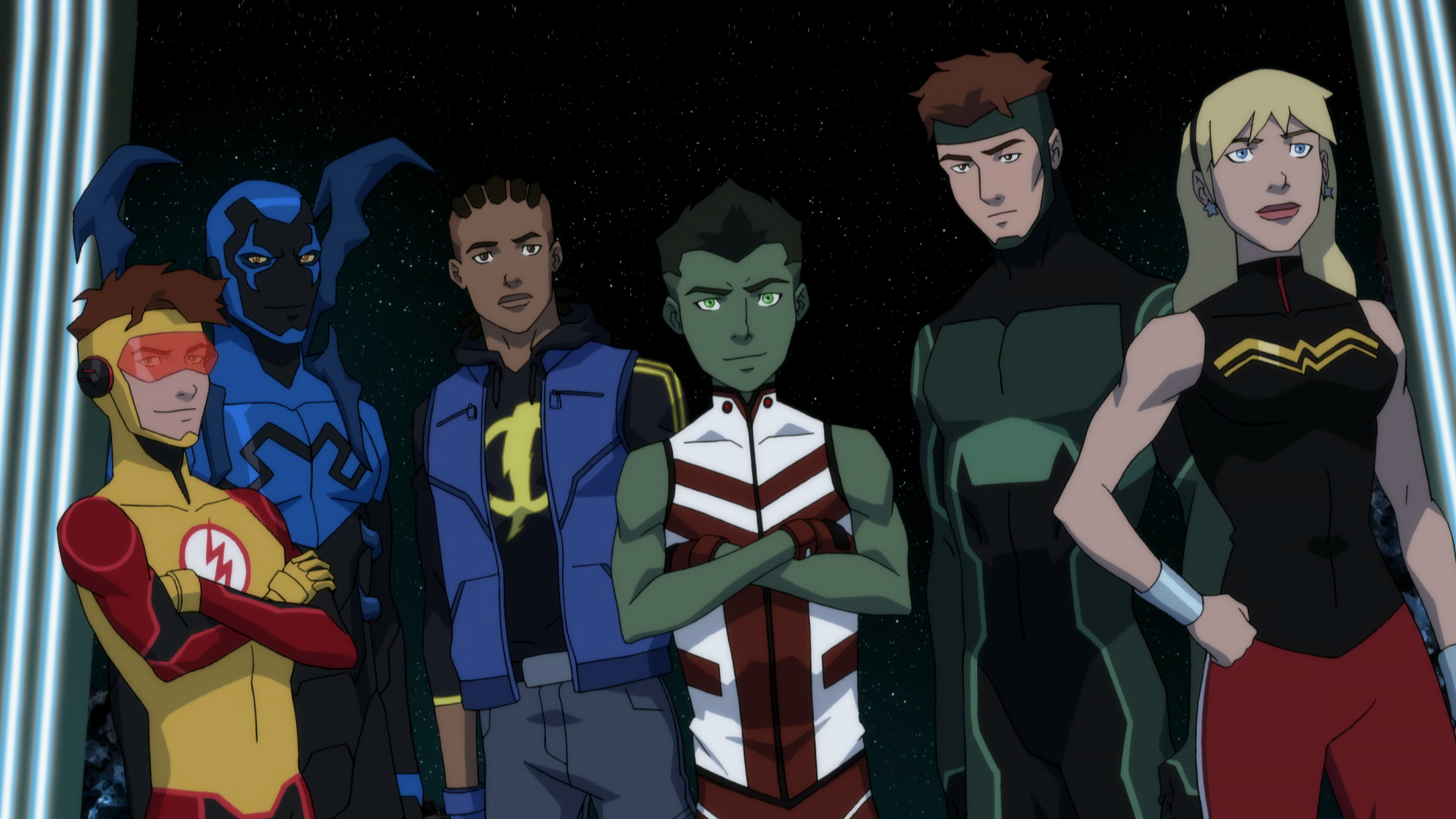 The latest episode of DC Universe's ‘Young Justice: Outsiders’ puts Beast Boy's brainstorm of a public-facing team to the test, and it’s not the smoothest of rides. But in the plus column, we get to see the bright side of Gen Z's social media jones. So let’s recap everything that happened in "First Impression."

Before we get to the no-longer-covert covert team, we start somewhere deep in the Atlantic Ocean, where a Reach ship mysteriously comes back on line. Which totally can’t be a good thing, right? 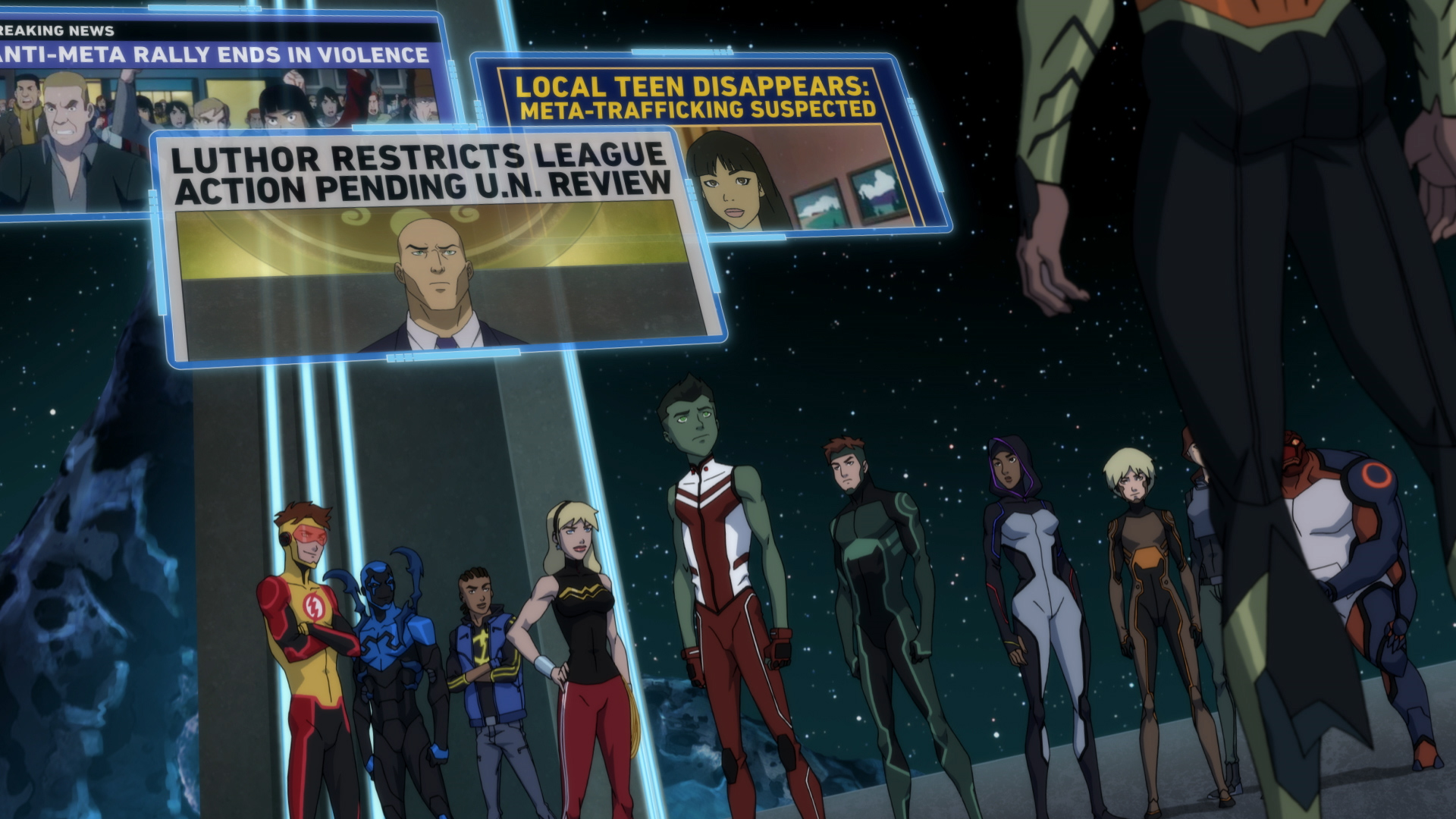 Meanwhile, up at the Watchtower, Beast Boy is making his big pitch to Connor, M’gann, Kaldur, and Artemis for an out-and-proud wing of Young Justice, unafraid to draw attention and work in the light of day. Most importantly, it would be a team not officially part of the Justice League, so all those pesky U.N. policies wouldn’t affect it.

Aquaman’s initially dead-set against it, but Beast Boy insists they’re constantly losing the public relations game to the Light, who are masters at media manipulation. But Garfield thinks his recent social media surges — stopping that purse-snatching in L.A. and thwarting Onslaught at the Thanksgiving fun fair — show a way to influence public support that the Light can’t corrupt. Because if there’s anything pure and unassailable in this world, it’s Instagram.

And so Beast Boy, Kid Flash, Blue Beetle, Static, GeoForce, and Wonder Girl unveil themselves as the new, completely not covert team. Then Kaldur rattles off the rosters just so everyone is on the same page — and honestly, it’s a huge help for the OCD among us. The covert team is now Miss Martian, Superboy, Tigress, Halo, 13, Forager, and Tara, while Beast Boy will lead the new public squad — but still under the oversight of Miss Martian. Just, you know, covert oversight. Covertsight?

Then Beast Boy whisks everyone to Hollywood to the lavish penthouse atop the Premier Building, which he’s outfitted as the new team’s digs, or “the Hub.” There’s a mission control center, a cush lounge area, and bedrooms for Garfield, Brion, Tara, Vic, and Forager. Then Garfield reveals the best part: Thanks to the contract with Goode World Studios he can’t get out of, Gretchen Goode is unwittingly footing the bill for the Hub.

M’gann quite correctly points out that six super-teens sharing a plush penthouse is kind of a recipe for hormonal disaster, so Helga Jace offers to move in and serve as the new pad’s den mother. Which is apparently an upgrade after living in a hotel for months. Hey, whatever makes you happy, Helga, some of us like room service. Everyone seems pretty pleased with the whole setup — except Forager, who was just fine with how cramped they all were before. Snug as a bug and all that.

Now that sleeping accommodations are all settled, it’s time for the episode’s action, whisking us away to Brooklyn, Maine. (It turns out there actually is such a place in Maine, only it’s spelled "Brooklin.") On a snowy evening, a young woman named Gaby is walking down the street scrolling through her feed when the kindly sheriff (who sounds a lot like Puddy from 'Seinfeld' though it is NOT Patrick Warburton providing the voice) offers her a lift. Before they can chat for too long, a Reach scout ship zooms in and blasts the sheriff’s cruiser straight to hell.

As they flee, Gaby — naturally — streams the whole thing live, which gets the attention of Garfield and company back at the Hub. Before they can jump into action, they watch Aquaman arrive to take on the Reach ship — or ships, as it turns out. Three of them. Kaldur’s taking a beating, so the new team rushes over to save the day. 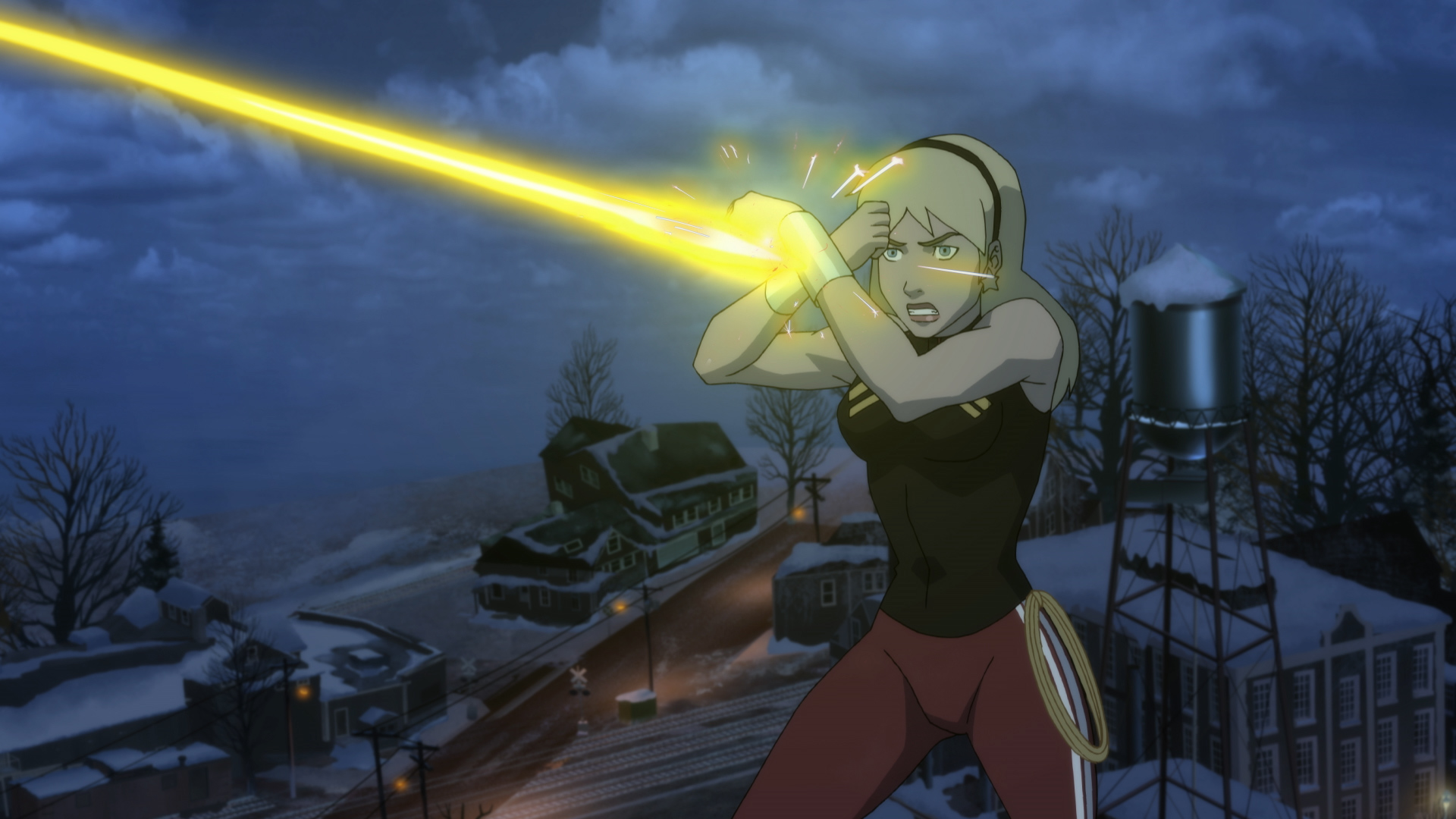 The ships are in fact Reach, which means Blue Beetle can deactivate them on contact, so the rest of the team keeps the other ships occupied while he gets to work. Wonder Girl gets blasted into the local library, where she meets Gaby’s friend Antonia, who also starts livestreaming the fight, because who doesn’t love multiple angles?

A third teenage girl, Tommi, watches — and, of course, broadcasts — in the woods as GeoForce, Static and Blue Beetle disable one of the ships. All this livestreaming means that all of their friends and family are watching the fight play out over social media — just as Garfield predicted.

The team takes down the Reach ships and introduces themselves to their new young fans. As it turns out, the ships were being piloted by some Intergang agents — Whisper A’Daire, Cairo Defrey, and Scorpia A’Daire. So, totally not aliens. Which is a relief, honestly. Unfortunately, the hijacking of the ships and ensuing battle set off a distress beacon that fully activates that massive Reach ship on the bottom of the Atlantic. The big one comes fully online and makes a beeline for Brooklyn, all on autopilot.

But before it can arrive, the town’s mayor runs out and has the new team arrested for violating their anti-vigilante justice laws. The team goes peacefully, but then the Reach behemoth shows up before they can get too far into the booking process. The Mayor refuses to call the Justice League, since he’s already called in the Air Force. The Reach ship swats away the two drones that show up first, but there are fighters scrambled set to blow it out of the sky — and down onto the town itself.

Garfield decides they’ve had enough of being arrested, so the team members bust out of their handcuffs — rather easily, of course — and Beast Boy tells the Mayor he can have them arrested again after they’re done saving his town.

They get inside the Reach mothership just in time to stop it from firing on the jets and force it to crash safely in a nearby park — with the team inside. But don’t worry, they come out totally unscathed — and even get a nifty Air Force fly-by for their troubles.

Sheriff Maguire finds a legal loophole that keeps him from having to arrest them again, much to the Mayor’s chagrin. With Gaby still livestreaming, Garfield introduces the team and its mission statement to the world. He dubs them "The Outsiders," which is nice and catchy. There’s even a hashtag — #WeAreAllOutsiders.

Elsewhere, Artemis is having one last sleepover with Violet and Tara before they move into the Hub, but a thunderstorm is freaking out baby Lian and Violet. Cuddling up with Lian seems to have some sort of effect on Tara, but not enough to stop her from keeping up her text chain with Deathstroke, revealing to him that the Outsiders are connected to the League. She asks for further orders but is told simply that her time will come. Which doesn’t sound good at all, guys.

Back in Gotham, a shadowy collection of heroes — Aquaman, M’gann, Oracle, Nightwing, Batman, Robin, and a holograph-Skyping Wonder Woman — reveal the whole Brooklyn thing was kind of a setup. Aquaman claims he threw the fight against Intergang — sure, Jan — so that the Outsiders could sweep in, since Blue Beetle was their best bet against the Reach tech. But despite the strong showing by the Outsiders, M’gann doesn’t think Garfield should be included in their shadowy meetings just yet.