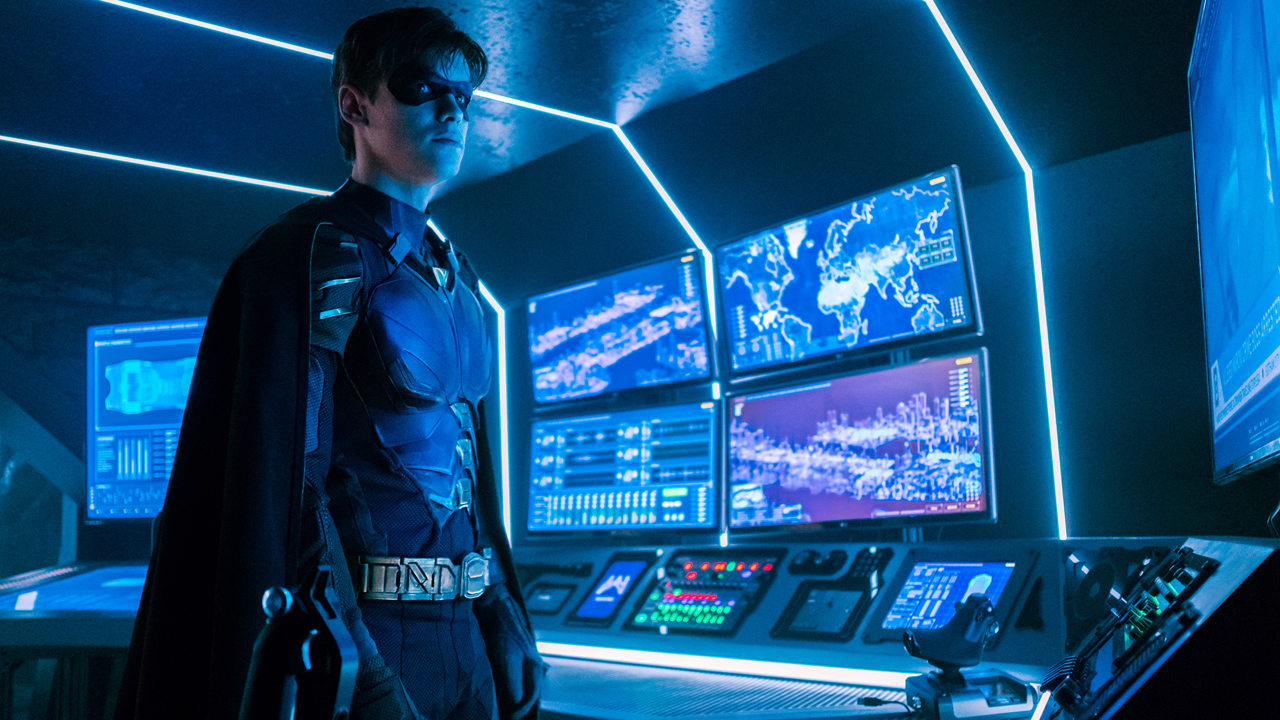 We're well over halfway through the first season of Titans, and the latest episode (watch “Asylum” here) does a lot to build on who Rachel and Dick are and what drives them. It's a journey into the heart of darkness launched by Rachel's attempt to find out more about her past…

Adamson's plans for Rachel play a huge part in this episode, as the young girl convinces Dick and Kory -- after their failed interrogation -- that she's capable of questioning the old man and finding out just what he's up to. When she finally faces off with him in the marble bathroom of Bruce Wayne's safe house, she's not as prepared as she thought. Adamson weaves a web of deception around her, convincing her that to truly find out who she is she must go to the facility where the organization he represents has been keeping her mother. We also get a glimpse of Rachel's true powers when Adamson slits his own throat to test her. The wound heals after she places her hands on his neck, proving to him she's the prophesied bringer of doom.

The family dynamic that's slowly been built over the series really comes into play here, as Dick and Kory play mom and dad, striking down Rachel's plan to go and save her mother. The pair is certain that it's a trap, and Rachel is devastated when Gar backs them up. After emotionally convincing Gar that he should understand as he also lost his family, the two young teammates sneak off, the naughty children once again defying the will of the surrogate parents who're trying to protect them from whatever chaos and danger awaits.

One of Titans' strengths is that it often changes the pacing or expectations we have of how a story will go. Rather than a long, tense sequence in which Gar and Rachel enter the titular asylum, they're quickly caught just as Kory and Dick catch up. If you're a fan of horror films and genre television you'll likely recognize the set-up of the second act of this episode, playing on the trope of the sinister asylum where one has to face the darkest parts of themself. Though, as is often the way with Titans, it manages to craft something unique that reveals new sides to each of our core cast.

Of course it was Adamson's plan for the Titans to end up at the facility from the outset, and the heavily guarded asylum soon has all four of them. Gar is caged and electrocuted like an animal, Kory is trapped underground in a room built to withstand her powers and keep her in darkness, and Dick is strapped up in a room we've seen before. In Episode 4, "Together," we saw the process that created the Nuclear Family, as the Father was drugged with hallucinogens and left in a padded room until he was broken. We see that horrifying moment mirrored here as Dick wakes up in the same room, tied down and struggling against his restraints.

As we witness the fate of her teammates, Rachel wakes relatively unharmed in Adamson's office. The man she killed and resurrected earlier is there too, presiding over his office and the facility where her friends are being tortured. Rachel is none too happy with this arrangement -- and after a short exchange in which Adamson once again alludes to the biblical nature of Rachel's father and refuses to let her see her mother -- she decides she no longer has need for the evildoer and undoes the resurrection. As blood gushes from the man’s throat and the life seeps out of him, Rachel heads out to find her friends and the one member of her family who's still alive. 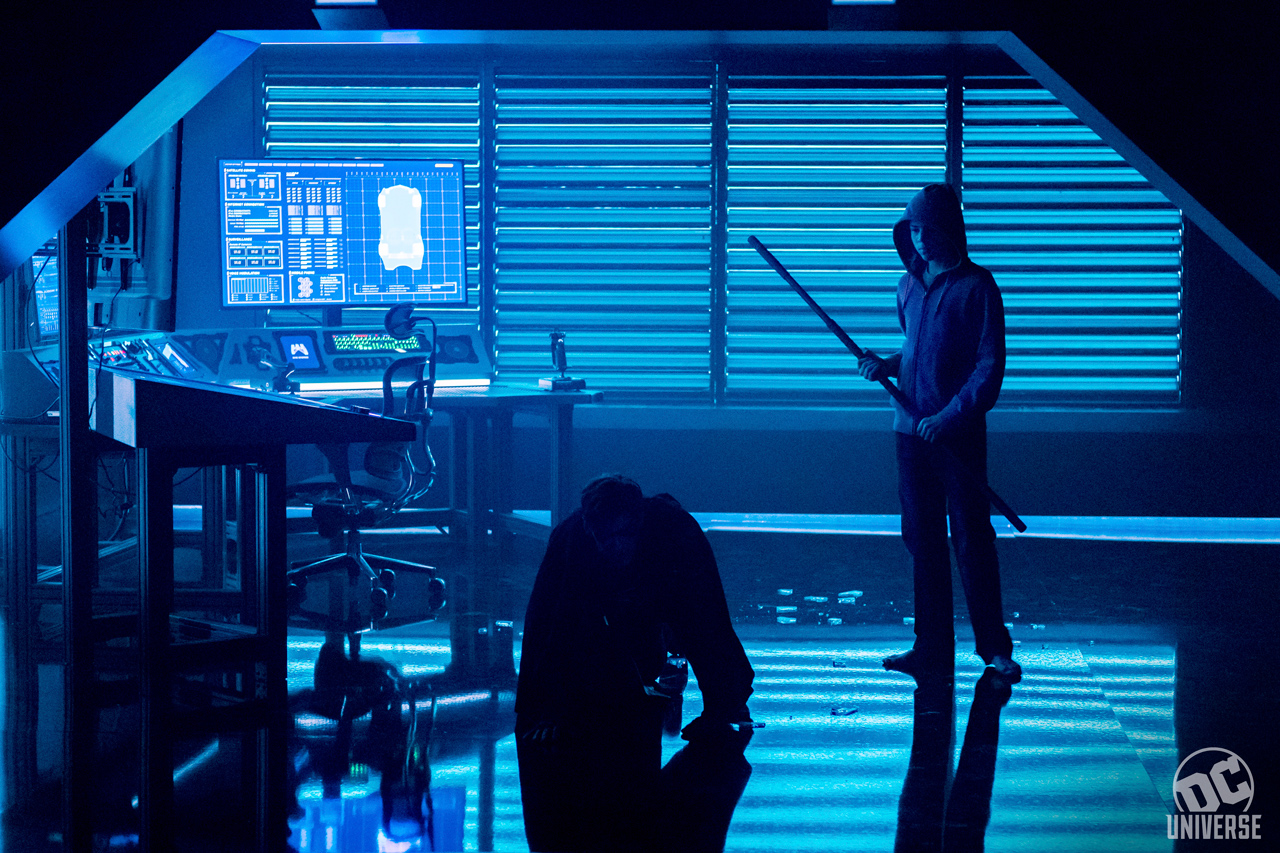 Meanwhile, Kory is undergoing an alien autopsy and Dick is taking a hallucinogen-fueled journey through his past. Most of Dick's trauma stems from when he was a child, and in his delusions we see him battling the teenage version of himself. The red-hooded figure beats Dick's subconscious to within an inch of its life, leaving it bloody and bleeding inside the Batcave, with Dick left apparently comatose in the padded room.

Rachel's search for her mother leads her to one of the facility's grimy cells. At first, the woman inside doesn't believe she's her daughter. But after Rachel shows her a raven-shaped birthmark, the pair embrace. Angela implores Rachel to run; but the young girl won't abandon her friends and so they head off through the dim halls.

For a series that's as consistently dark as Titans, "Asylum" really pushes the boundaries, playing on a lot of common fears. As Rachel and Angela locate Gar and attempt to free him, the self-proclaimed vegan mauls a guard, leaving the hero bloodied and naked when he transforms back into human form.

They soon find Dick, and Rachel begs him to come back with them. Invoking the promise he made never to leave her, she awakens him from his disconnected state. After battling through the underground tunnels, the trio and Angela find Kory, and save her from the demented surgeons. Gar helps free her from her trappings and tubes, and Dick carries her from the operating table. The Titans are reunited and now it's time to escape. 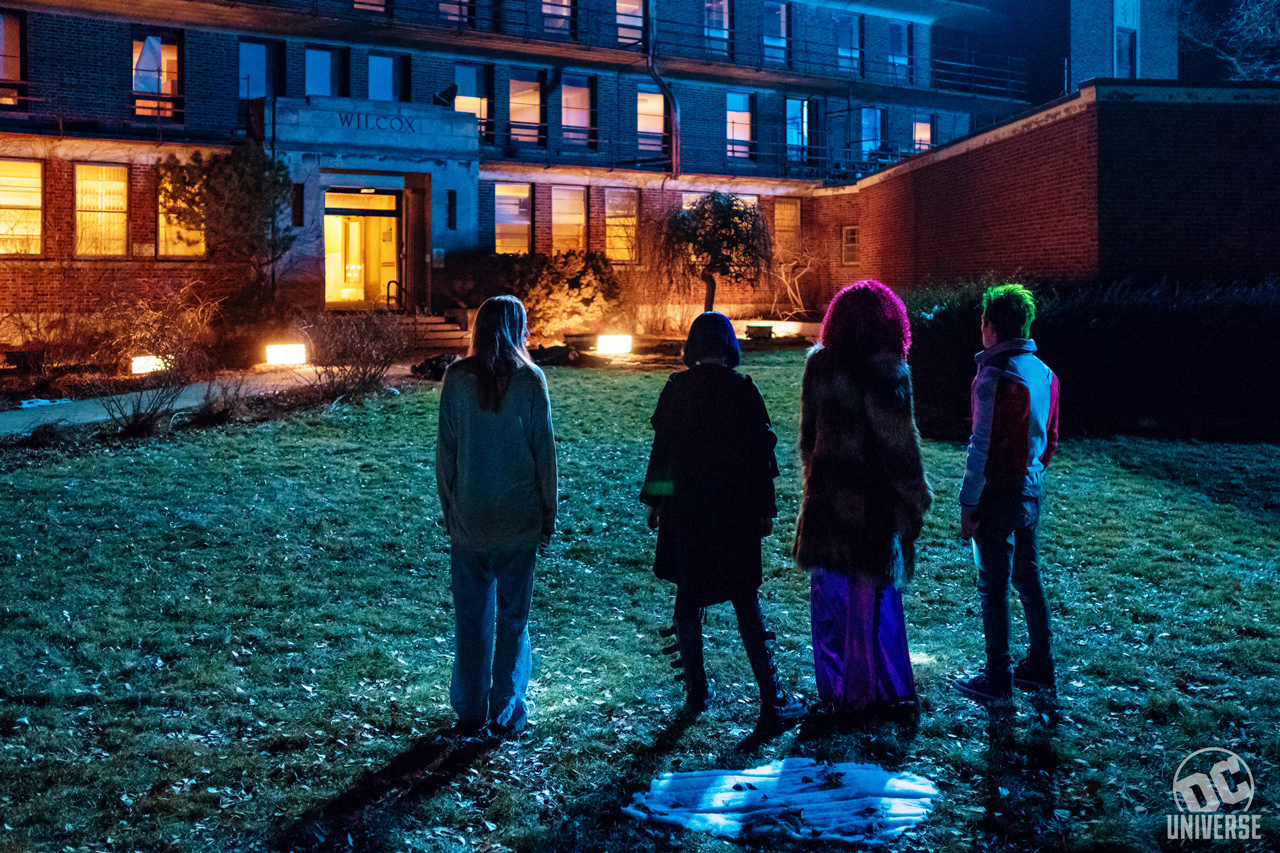 In “Asylum”, we get to see Dick's final moments as Robin. When the group is faced with a battalion of armed guards, he steps into the fray and brutalizes them with terrifying efficiency. We see Angela's horrified reaction as Dick breaks, bruises, and bestows violent justice upon his captors. After they're dispatched, he encourages the others to leave, pulling Kory aside and telling her that they need to destroy the building and everyone in it. As he tells her this, he looks down to a puddle on the floor, seeing his reflection in the Robin costume -- which he isn't wearing -- before the ripples he creates make it disappear. As Kory sets the facility ablaze, we know we're one step closer to seeing Starfire, Nightwing, Beast Boy, and Raven in their true forms. Their past lives purified and eradicated by the explosion which destroys the facility.

What did you think of “Asylum”? Let us know in our Community!