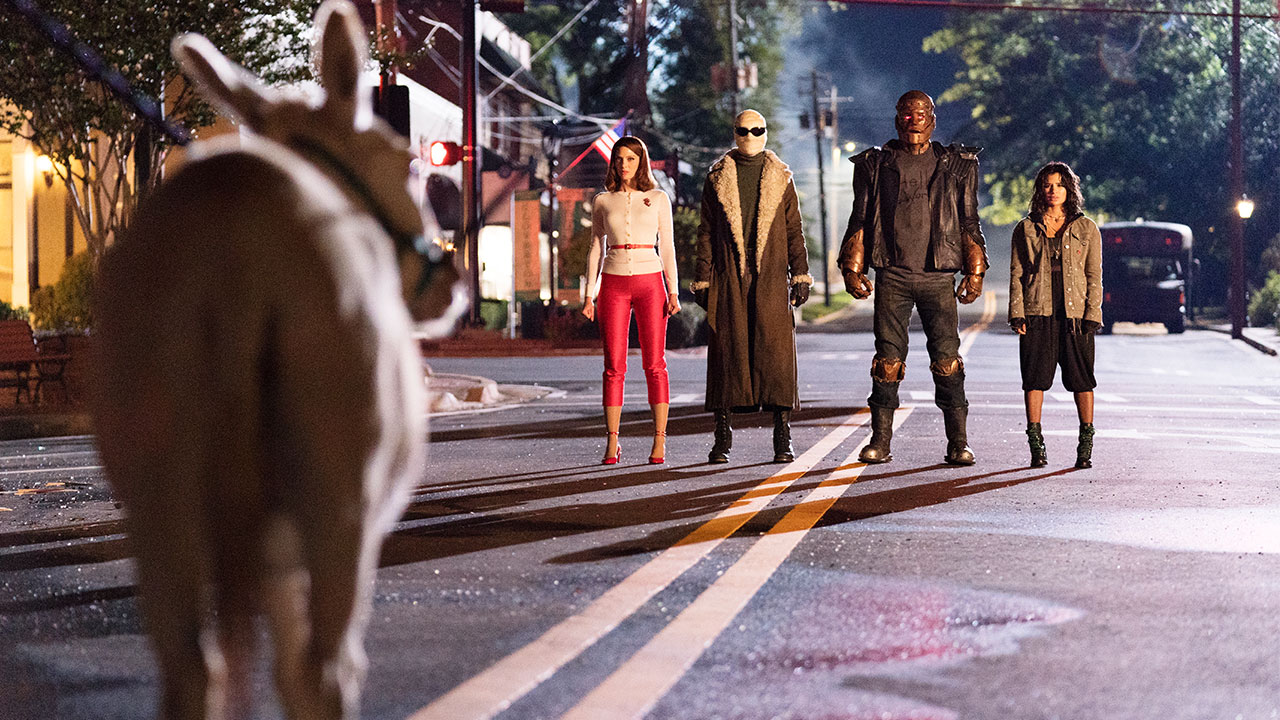 Get ready to meet your new favorite superhero team! These misfits are quite unlike any champions you've met before, because DC Universe's Doom Patrol is a show that embraces its unique protagonists at every turn. The third such original show (after Titans and Young Justice: Outsiders) begins with the season's main villain, Mr. Nobody giving a meta commentary about the state of comic-book screen adaptations, as we watch a terrifying Nazi experiment in '40s Panama transform him into an unfathomable monster.

Alan Tudyk's Nobody is our unusual entry point into the world of the Doom Patrol, but seeing as he's the big bad it's probably good to take his version of events with a pinch of salt. The first member of the titular team that we meet is Brendan Fraser's Cliff Steele, a superstar race car driver who, in 1988, was living the high life whilst sleeping with his nanny and getting majorly messed up on any number of illegal and legal substances. His unhappy life led him to drive recklessly during a race and...before we know it we're looking through his eyes as he stares up at a mystery man that we'll come to know as Doctor Niles Caulder, a.k.a. The Chief (played by Timothy Dalton).

It's a bleak outlook for Cliff, as we see Niles watching videos on an old TV entitled "How to Weld." We also get our first look at Rita Farr's Elasti-Woman and Larry Trainor's Negative Man as they hang out with Niles in his makeshift lab. As Cliff regains consciousness we see flashbacks of his life, his daughter, and his wife; but they're always interspersed with reality checks from the grim basement of "Doom Manor." Cliff's future teammates fill him in on his fate, with Niles revealing that the world thinks he died in a car crash and Rita revealing the truth about his situation: Cliff is nothing but a brain in a crude mechanical body crafted by the Chief.

After this horrific revelation, Cliff tries to come to terms with his new status quo. The discovery that it's been seven years since his accident is hard enough, but getting used to his new surrogate family and home whilst trying to learn how to walk is the biggest challenge. As Cliff attempts to cope, we get to know Larry Trainor, who -- whilst taking his incapacitated new friend for a walk -- tells him "I flew planes" when the big lunk enquires about how his bandaged roomate ended up in the Chief's care.

Nobody's voiceover disagrees, and in fact calls Larry Trainor an "American hero," as we see the young maverick climb into a test plane headed for space. Sadly for Larry, he gets accosted by an alien being that causes his ship to crash to Earth, leaving the pilot with severe burns all over his body and a mysterious intergalactic hitchhiker. Deep in the bowels of Doom Manor, Cliff is still trying to control his legs and, with the memory of his daughter, manages to almost take a step. He eventually manages to walk up the stairs, though not before we learn about the mysterious Rita Farr.

Elasti-Woman's story is one of karmic vengeance and strange magic, which the '50s film star encountered as she was shooting one of her pictures, Forbidden Congo. Alas, after forcing the production to fire an amputee member of the crew due to him being "an eyesore," Rita falls into a lake during filming, swallowing a mysterious green light whilst she's underwater. The crew is reluctant to help her, but as she finally recovers on land she notices something strange: everyone is repulsed by her. As one of the costumers pulls out a mirror, Rita's face is revealed to be melting, expanding, mutating... Crew members are horrified. One vomits. And Rita slinks off to, as Nobody puts it, "the only place she'll ever feel safe again."

With Cliff now able to walk he decides to go and find his wife and daughter, whom he assumed were still alive after his NASCAR crash. Alas, the Chief has a surprise for our protagonist and plays him an answering machine message which triggers an immediate flashback. Cliff actually survived the crash, won the race, and smashed a friend in the face with a bottle of champagne -- before heading back to his trailer for a night of drugs and adultery. Later, however, he's remorseful and calls his wife to apologize. Soon, he takes his family out for a drive, finally seeing a future with them, one in which he can better himself. Sadly, a truck comes out of nowhere and decapitates the car along with his family.

This news reduces Cliff to an almost comatose state, and we see him languish in the Manor halls for decades, slowly putting together a miniature race track until he reaches the present. Things seem to be settling in the hallowed halls, until the introduction of Crazy Jane, a dynamic young woman with 64 extra personalities. She turns up at the house and picks a fight with Cliff. But she eventually befriends him after he meets another one of her personalities whilst she's outside painting. Cliff explains he's been feeling down because it's almost his late daughter's birthday, and that's why he was just as much of a jerk to Jane as she was to him. Things come the closest to normal that they can in a house of misfit metahumans.

After Niles feels comfortable enough with his patients to head off on one of his expeditions, the group gets antsy and at Jane's suggestion that they venture into the local town of Cloverton, Ohio for an afternoon of fun and freedom. Which ends up going horribly wrong. The team's first mistake comes when they split up, with Rita visting a diner and listening to a waitress reminisce about her old films, oblivious to the fact that she's speaking to the real Rita Farr and not an impersonator. Larry heads to a bar where we get an insight into his past and learn he was once forced to keep his sexuality hidden from the world. Jane and Cliff head to a local toy shop to buy his daughter a symbolic gift, but through one of her less sensitive personalities Jane reveals that the Chief lied and in fact Cliff's daughter is still alive.

Rita relives her glory days until the waitress says Rita Farr became an adult entertainer. Suddenly the real Rita loses control of her body, the '50s pinup becoming something akin to The Blob. As Elasti-Woman destroys the diner, Jane and Cliff are in an altercation with the cops, and Larry's "Negative Spirit" emerges, destroying some electrical pylons. Rita's transformation is complete and, as she wreaks havoc on Cloverton, Cliff steps up to save a school bus full of kids and calm Rita down. Their struggles aren't over yet, though, as the Chief makes it back just in time to realize what his adopted children have done and the terror they've invited to their small hamlet.

Mr. Nobody then arrives in present-day Ohio. It looks like he's out to cause as much chaos as possible, starting with Niles' hometown and its new heroes. The Chief thinks it's time to turn tail and run. But, inspired by Cliff, the team stays to fight the meta-monster, and finds the town of Cloverton about to be sucked into a swirling vortex of Nobody's making. There's also a donkey with a very specific way of communicating...

What did you think of the Doom Patrol pilot? Let us know in our Community!