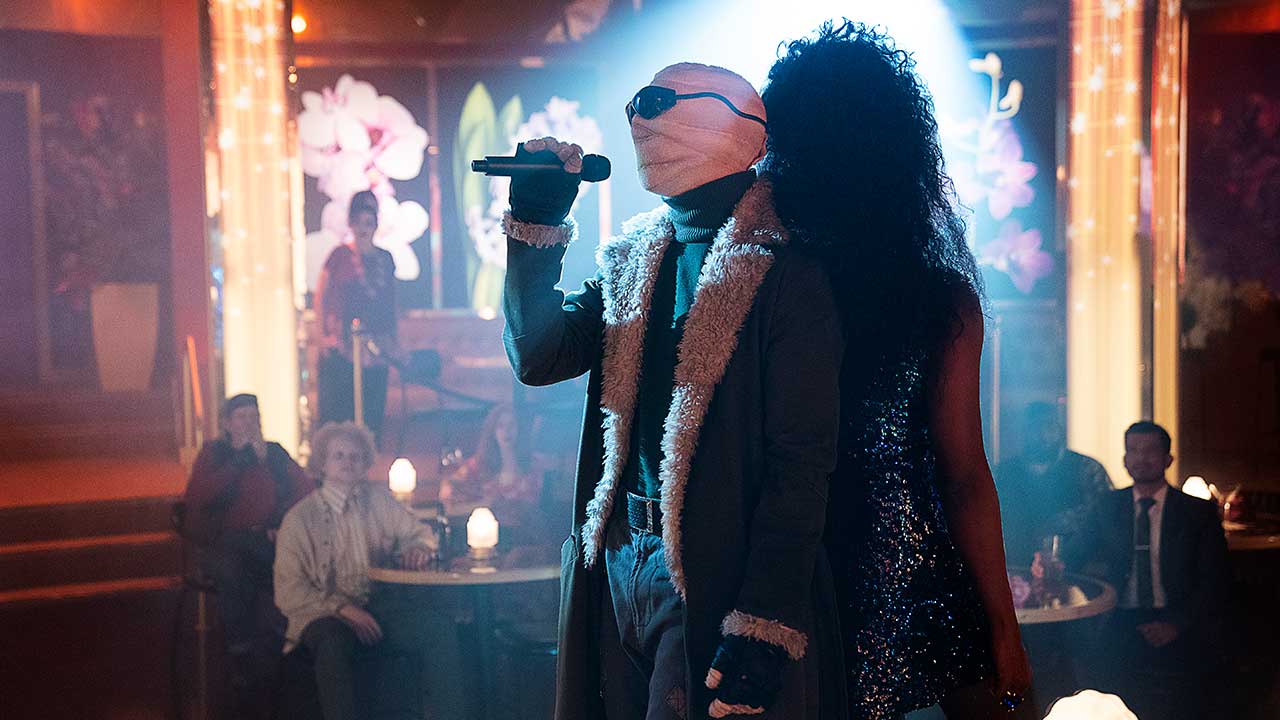 We're getting closer to the end of our first season adventures with Niles Caulder's gang of fabulous freaks in DC Universe's Doom Patrol. In this week's "Danny Patrol" we get to meet one of the most iconic characters from Doom Patrol canon; and, if you can believe it, things get even weirder!

This episode starts with a complete tonal shift as we're introduced to a crack team of black-clad men led by Agent Morris Wilson and his unnamed partner. You might recognize the logo on their arms as the same one which was on the patch pulled out of a forgotten drawer by Larry in "Doom Patrol Patrol."

With that enigmatic tease offered up, we see the group is trying to take down a mysterious threat that just happens to be a sentient street named Danny. After Morris is sent in, he's lured into the colorful thoroughfare, which speaks to him via signage and floating leaves. But before his colleagues know it, Agent Wilson and the so-called "Danny Street" are gone.

Back at Doom Manor, Cliff is getting patched up by Cyborg after last week's episode, in which he was attacked by a rat controlled by Mister Nobody. Though Vic is trying his best to help, Cliff can't help but bring up Jane's painting in which she portrayed Cyborg as a murderous monster killing the entire team. This understandably upsets Vic, who runs out on the (robot) man he was trying to help. Meanwhile upstairs, Larry is having a flashback to his days with the mysterious group sporting key and sword patches seen earlier. It turns out they're a scary Department of Defense off-shoot which enlisted the newly-powered Larry in some "non-compulsory" service.

Cliff, meanwhile, is incredibly happy when Jane calls, apparently all sunshine and rainbows after their brutal fight in "Therapy Patrol." Alas, all is not what it seems, as Rita quickly reveals that Jane is inhabiting one of her worst personalities, Karen. A blonde bombshell obsessed with '90s romantic comedies and true love, Karen is the persona who appears whenever Jane is really struggling, and she's already gone off to reunite with her useless love interest, Doug.

Ever the hero, Larry tries to reassure Vic, who's becoming ever more distressed by Jane's horrific vision of his future. Just as the pair lament the lack of The Chief, there's a ring on the Doom Mansion doorbell. It seems like no one's there, except for a note that says "Help Niles," and a cake containing a map that features Danny. The brave duo then head off looking for their mysterious visitor who just might lead them to their long-lost leader.

The boys end up in a desolate area of Springfield where they suddenly find the shops talking to them, asking them where Niles is. The pair is decidedly perturbed but quickly discover a lively club named Peeping Tom's Perpetual Cabaret, filled with drag queens and bright lights. The hostess of the club quickly picks Larry and Vic out from the crowd and explains to them the reality of Danny: the gender queer roadway has created a society that protects those who've slipped through the cracks of the mainstream world, calling themselves the Danizens.

As the pair quizzes Danny, the street answers them through projections on the stage of the club. It's an intriguing introduction to a new character, but before we can get to know Danny too well we're swept back into the strange world of Karen. Rita, and Cliff have arrived at her party from hell where her beau's parents are incredibly unhappy to see their son reunited with Jane's weirdest personality.

Back with Danny, Larry, and Vic, the street is explaining how they're on the run from Darren Jones, whom comics readers will recognize as one of Danny's key enemies. The appearance of the Key and Sword logo sends Larry back into his past, where we see him being experimented on by a cruel soldier with an obsession with normalcy. It's revealed that Larry was tortured in an attempt to control his powers and sexuality so he can be "made normal" once again. It's here that we're truly introduced to the Bureau of Normalcy, an evil organization that wants to stamp out anything strange. As Danny and Larry bond over their shared tormentor, Larry asks why the Bureau is after Danny, and the host of Peeping Tom's, Mora-Lee Corrupt, reveals that she is, in fact, Morris, the partner of Darren Jones, whom we saw at the beginning of this episode.

Karen is causing more chaos. But as Rita tries to talk her down, Hammerhead manages to break out for a moment. After she warns Rita about Karen's terrifying powers and her dangerous hold over Doug, Hammerhead is gone, leaving Rita to deal with Karen and her new fiancée; whom she can apparently control with her mind. Soon, the whole family is under her spell and Rita is left horrified, with no idea what to do.

On Danny the Street, Larry is quizzing Morris about his past as a member of the Bureau of Normalcy. Morris reveals how he turned on his past, falling in love with the safety of Danny and the freedom that he felt there. After tipping Danny off, the pair escaped, but the Bureau and Darren Jones have been following them ever since, threatening the life of Danny, since they thrive on the happiness and energy of the people who live on them. Larry is terrified of facing down the men who tortured him, and it splits the two heroes apart -- with Vic choosing to stay on and help the Danizens, and Larry petrified, reliving the horrors of his past.

Things are going just as badly with Rita and Karen, who are demolishing each other with harsh words and judgment, as Rita tries to convince the new side of Jane's personality that she must free her captive lover and his relatives from her thrall. Sadly, Karen is having none of it and decides the only way she can live through the happiest day of her life is to cast her spell on Rita too.

Back on Danny the Street, Larry reveals a side of himself we've never seen before. It's a rip-roaring karaoke performance in Peeping Tom's, which manages to inspire the audience to a happiness that seems like it might be enough to save Danny. But, in a gut-wrenching twist, it's revealed the entire musical number was only in Larry's head, and Danny is just as at risk as he was before. Just as Mora-Lee decides she has to return to the Bureau in an effort to save Danny, the secretive militia arrives and leaves the unexpected team of Vic, Larry, the Street, and Mora to fight the best way they know how.

But in a surprise move, Danny disappears most of the Bureau's men, leaving only Darren, whom the Danizens -- led by Mora-Lee and Larry -- clobber until he agrees Danny the Street is off limits. When he threatens to take Larry in, Larry laughs and asks him to tell the Bureau "Captain Trainor sends his regards," before knocking the homophobic monster out. Vic then asks Danny for help in finding the Chief, mentioning it was Mr. Nobody who took Niles, which causes Danny to shut down; afraid of putting the people who live on them in danger, and throwing him and Larry back to Doom Manor.

Back at the wedding from hell, Rita calls Cliff into Karen's house. Although Karen thought that she might be able to manipulate Cliff with her mind, it seems her mental power doesn't work on robots. Following an attempt to save Jane and Karen from themselves, Cliff accidentally horrifies Doug's family enough that the wedding is off, and Karen falls back into the underground of Jane's mind, which we get to see for the first time. It's a terrifying place, a rocky railroad which Karen tries to hold onto before being dragged back into the darkness. It's a sad moment when we realize for the first time just how hard the fight for supremacy really is within Jane's head. But even more worrisome is the fact that with Karen gone it seems Jane is gone too. Next week's episode is called "Jane Underground." Fingers crossed it lives up to its title and shows us where Jane has gone.

What did you think of "Danny Patrol"? Let us know in our Community!