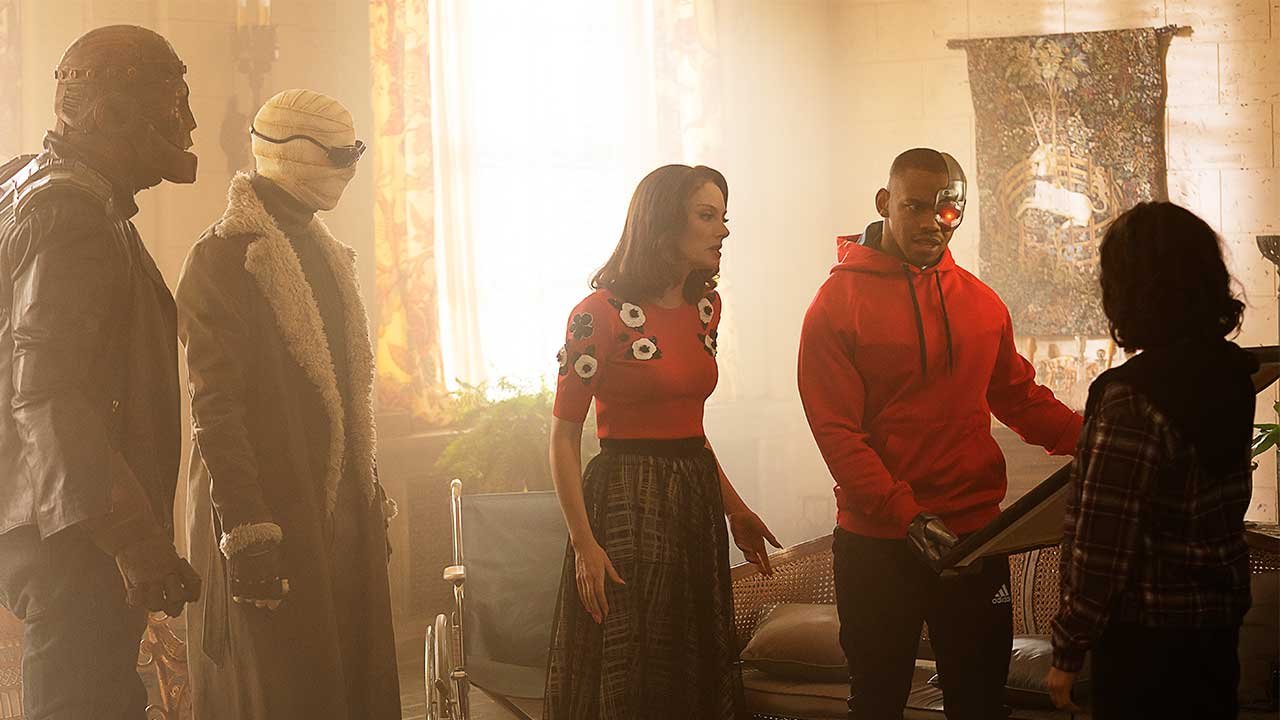 The Doom Patrol is in a strange place, having discovered that they aren't the Chief's first group of super-misfits. And as we enter the seventh episode of DC Universe's Doom Patrol, "Therapy Patrol", things are getting tense in Doom Manor...

Clint is trying to rouse the group to action and, as he gives an impassioned and profanity-filled speech, and Rita begins to reminisce. In a flashback to 1930, we find a young Rita visiting a famous actress as a prize for winning a pageant. It quickly becomes clear that Rita is a victim of her controlling stage parents. who took her out of school to encourage her to take up a life in "the pictures."

Back in the present, Rita is trying to remain calm as her control over her body lapses. After blobbing in her bed, she loses control once again as she walks through the house, melting into a grate on the ground and finally realizing some harsh truths. Rita's journey has been an interesting one, and we're getting to see her come to terms with and gain ownership of her powers. Rita begins to see that her powers are a gift and just how immensely strong she truly is. As she comes to this revelation, she hears Cliff fighting elsewere in the manor and suddenly she's nothing but a pile of soft muscle.

We next get a glimpse of Larry's past, and it's a devastatingly sad portrait of a young boy whose parents were violently homophobic. They lament their fate and worry their "queer" son could ruin everything. It's a grim insight into just why Larry was so committed to living a lie. In the present, he's still coming to terms with the entity inside him. And as he requests a day off, he suddenly wakes up in the past.

It seems like the spirit is trying to send Larry a message. But before he has the chance to argue, he's back with John again. The pair appear to bond over the memories, as Larry explains his past bad choices and mistakes. It appears the spirit is trying to make him realize his own fears have been holding him back. After an impassioned outburst, it looks like Larry's finally made a breakthrough.

Just as Rita before him, Larry is brought crashing back to the present by Cliff and whoever he's fighting. But before he can discover any more, it's Cyborg's turn to take a trip down memory lane. We see Vic as a little boy in a doctor's office, his shoulder dislocated after disobeying his dad's instructions. Vic shares a private moment with his mom as they agree to keep the injury from his father. Then we're back in the present, as Vic realizes, after he hacked Grid, his father had been filtering his social media.

Vic takes full advantage of his first taste of freedom, immediately hitting up a dating app that his father had blocked. Unfortunately, Vic quickly realizes most of the women are only interested in one thing. If that isn't depressing enough, it turns out hacking Grid may not have been the best idea, as the program begins to stalk one of the girls that Vic has taken a shine to. Vic sends one potential date a selfie, but is crushed when she's disgusted by his half-robot form. Her loss! Vic deletes the app just as Cliff storms out, ready to fight. He blames Vic for his discovery that the man his wife was having an affair with is raising his daughter. It's completely irrational, but as Vic raises his arm cannon, we finally know who Cliff has been fighting this episode.

Jane's is the next flashback, and fans may be surprised by just how old the fresh-faced hero truly is. Her story begins in 1950, as we see her father sinisterly smoking a cigarette over her cradle. In 2019, Jane is painting a picture of the Chief with the word BASTARD scrawled across it, so she's clearly not in a good place. We see her battle some of her multiple personalities to try and decide on a course of action. After a snappish interaction with Cliff, she heads to the basement where she succumbs to curiosity and watches more videos of her past sessions with the Chief. It's a battle between Jane, Hammerhead, and the Hangman's Beautiful Daughter as they trash the Chief's office while trying to stop themselves. It's a brutal dance, and once again Diane Guerra shows her powerful acting chops.

The team finally converges in the library, where Cliff is trashing everything after Vic failed to subdue him. Before we know it, it's back to Cliff's childhood in South Florida. Abusive and depressing doesn't cover it.

We're finally seeing Cliff's morning, and it seems he's totally lost the will to live after his social media discovery. Before he succumbs to his depression though, he drives the team's school bus as fast as he can down the road until he appears to reach the man who raised his daughter. But it turns out Cliff is malfunctioning, and is completely and utterly delusional. He begins to beat up his surrogate family, thinking they've stolen his kid, before realizing that he's in Doom Manor. It's a breaking point for the man inside the robot, his brain just desperate for release from his pain and grief.

Cliff is suddenly hit with a genius plan: therapy. His own pain has caused him to see the power in what they have, a family. Rita agrees, concluding that Mister Nobody can utilize their anxieties, fears, and secrets as a way of destroying them. With her co-sign the team embark on -- in Cliff's words -- THERAAAPPPPPYYYY... Rita begins to share her past as an illusion, a woman who wasn't really there, and who did one terrible thing in her younger years. Cliff does an endearing but very bad job at mediating the session, yet it seems to work. Next up is Larry, and he's ready to tell his story, and talk about the thing that Mister Nobody tried to hurt him with -- his love for John, his battle with the spirit, and of course his coming to terms with his sexuality.

Vic finally shares the story of his mother's death, or at least what he remembers. It occurred during an argument the two were having about his school career. He explains how it ended up defining him. Yet soon he's hitting the real truth, that his father might have implanted those memories, and is trying to hide something from Vic. But -- to his words -- what could be worse than killing his own mother?

Jane tries to share her apocalyptic visions with the group, but after they dismiss her painting, she gets defensive and her honesty brings something cruel out in Cliff. As Jane runs off, Cliff begins to malfunction again, hallucinating and writhing around on the floor. In the most shocking of twists, we see a mouse in his head...and guess who convinced him to head there? MISTER NOBODY!

What did you think of "Therapy Patrol"? Let us know in our Community!