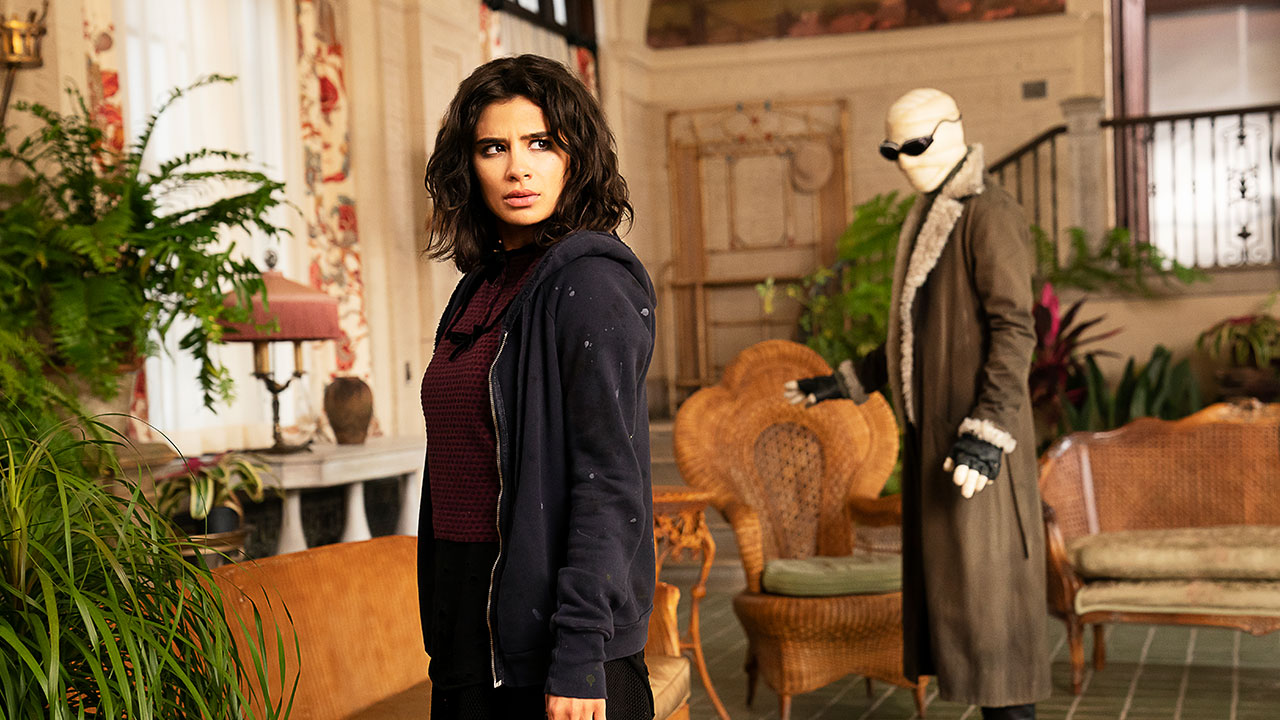 We've hit episode 5 in our adventures with DC Universe's Doom Patrol. This week's episode, "Paw Patrol", starts with a flashback... It's New Jersey, 1977, and Jane is causing chaos at a punk show before she gets hauled back to the mental asylum in which she's been living. The orderlies are scumbags though, and beat her once she returns, telling her she'll rot here because "That's where scum like Jane belongs." It's a bleak beginning, but builds on what we already know of her brutal past and how she came to have so many personalities living in "The Underground."

Back in the present, the Decreator still has his eye in the sky looking down on Cloverton; and the apocalyptic Cockroach we saw in episode 2 is very very happy about it. As crowds and news reporters gather, the eye begins turning them to to ash. It's all looking pretty bad, and the Doom Patrol is falling apart at the seams as they battle with Kipling and each other.  Apart, that is, from Rita. Her maternal instincts have been sparked by Elliot, and she's desperate to find the boy she couldn't save from sparking the apocalypse.

Back in Nurnheim, Jane is still a little girl the Archons are calling Kay (the name of her core personality in the comic books), and Cliff is nothing but a brain on the floor. The giant clowns turn the two back to their preferred forms, and suddenly it's off to explore Nurnheim they go. But Cliff soon realizes that all is not what it seems... Elsewhere, Mr. Nobody is infuriated the team has managed to set off the end of the world without him, remarking, "We're not even in the last two episodes yet." It ooks like Nobody and Niles are about to team up and try to stop the apocalypse...

It's a Jane-centric episode, as Mr. Nobody files through a selection of flashbacks to find a version of the young girl who can become a cult leader and fight the Decreator. We settle on the 1977 version of Jane, who's undergoing a very bleak form of therapy with a horribly abusive doctor, who's desperate to delve into the grimmest parts of her past to torture and control her. Unfortunately for him, his attempts make a new personality surface -- Doctor Harrison, who's charming, controlling, hugely powerful, and just perfect to lead a cult to face down the Cult of the Unwritten Book.

But in the snowglobe in Doom Manor, Jane and Cliff realize they're trapped in an ornament, and they begin falling apart under the strain of being lost. Outside the dome, Rita locates Elliot, hiding in the manor's garden. The boy is sad and guilty over the coming end of the world. The Decreator focuses his gaze on him, turning him to ash and leaving Rita devastated. Just when she thinks all is lost, however, she sees Niles running across the grounds.

The Chief reveals to the very confused Doom Patrol that he's now in cahoots with Mr. Nobody, which doesn't really affect anything as Dr. Harrison prepares to create a brand-new cult dedicated to the Re-Creator. As the cult grows, Harrison manipulating everyone with her charm, Niles tries to find their influence on the future; utilizing the singing horsehead Baphomet and trying to convince Kipling he's not completely lost it. While they wait for the new cult's past to catch up with the present, Niles and Vic reconnect, the latter terribly disappointed with the man he looked up to his whole life. It doesn't last long though, as Baphomet has managed to find the Rewritten book.

Though the team thinks they've found the Rewritten Book, it turns out the patients whom Dr. Harrison recruited were creative, and decided the book should be a dog with invisible letters on it, and that a bell would need to ring before it could be read. As the rest of her followers get turned to ash by the Decreator, one member of her flock, Marilyn, makes it to Nurnheim and reminds Jane about her newly created past and the bell she must ring to save the world. As Marilyn sacrifices herself, the book becomes readable, and as Kipling reads its words the Recreator is born, fixing everything that was lost and apparently saving the world.

While the Doom Patrol try and settle back to normal life, or at least their version of it, Kipling departs, leaving Rita to search for Elliot. As Cliff and Jane make it back, the Chief reveals he has to go back to Mr. Nobody. The group is devastated, and they try to save their leader, but Nobody is too powerful, his grip on the Chief too strong. He slows time, causing Vic to unintentionally hypercharge his arm cannon, causing a massive explosion. He destroys his cybernetic weapon, and Cliff initiates an emergency repair, calling Silas Stone, against all of Vic's wishes.

Back in the past, Mr. Nobody is meddling again, and we get to see Niles rescue Dr. Harrison from the potential horror of a frontal lobotomy, thus beginning her journey with the Doom Patrol. It's a sweet ending after an emotional rollercoaster of an episode, as the pair drive off to a better future. But before the hope can settle, Mr. Nobody has one last task for Dr. Harrison. He sets a whole new chain of horrors into action as he puts her on a course to destroy her own team decades later. It's a mind-bending ending that plays into everything we've come to expect from this startlingly smart show, but we'll have to wait until next week to see how Nobody's schemes impact our favorite team of freaks.

What did you think of "Paw Patrol"? Let is know in our Community!