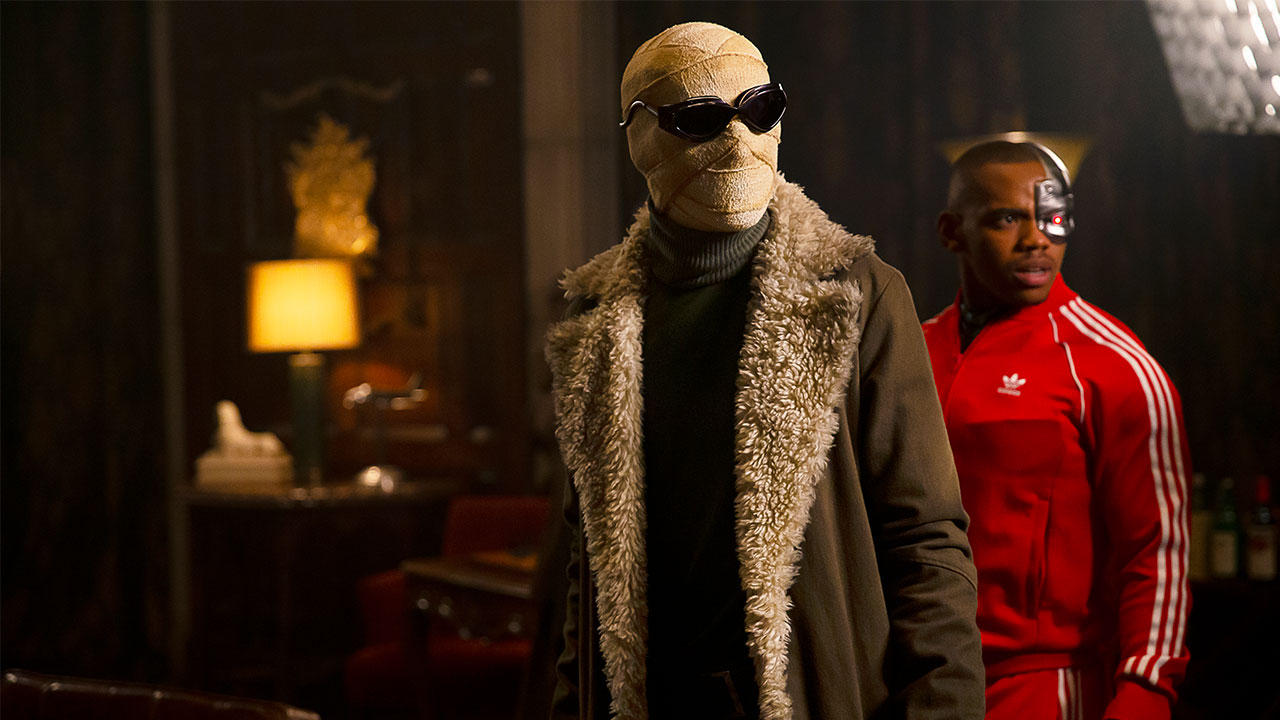 After Nazi puppets and wind-up madmen, plus Cliff going on a very vicious clone killing spree, it was hard to imagine Doom Patrol could get much stranger or darker. But as we inch closer to the midpoint of the season, the show delivers again on both fronts. We begin the fourth episode, "Cult Patrol", with a creepy flashback to Salt Lake City, Utah -- 17 years ago -- where we see the growth of a young boy called Elliot, on special birthdays throughout his life. His suburban parents appear to be part of a cult that will be very familiar to fans of wrter Grant Morrison and artist Richard Case's run on the Doom Patrol comic.

When this montage hits the present day, Elliot's fate is revealed. Those who know the story of the Cult of the Unwritten book will be far less surprised than Elliot is to find out he isn't here to save the world -- he's here to end it. Meanwhile in Reno, Nevada, we find a mysterious man named Willoughby Kipling in a motel, very worried about the Cult of the Unwritten book and the end of the world, as undead nuns beat his walls down with meat cleavers and a priest bears stigmata that bleeds light.

Back to our favorite group of misfits...  It's a trip through the past with Cliff, who is having nightmarish dreams about his daughter, which seem to have been triggered by Jane's Babydoll persona taking a nap on his chest. When Hammerhead wakes up, she's not too happy about it, and seems to be angry about something that Cliff did whilst the pair were in Paraguay. As Cyborg tries to lead the uninspired team to find Niles, they get a surprise guest in the guise of Willoughby, or "Kip" as he calls himself. He clearly has a past with the Chief, and seeing as the latter isn't around, he's got plans for the Doom Patrol, whom he thinks can help him stop the Cult, find Elliot, and save the world.

Luckily for everyone, Kip summons a singing blue horsehead named Baphomet who tells them exactly where Elliot and his parents are and how they can find him. So, with nothing more than a couple of magic cigarettes, Kip opens a dimension to a distant land known as Salt Lake City, and off we go. Before the Doom Patrol know it, they're back through the portal with Elliot in hand, whom Kip forgot to tell them he was planning on killing. Our good band of freaks is not having any of it, and decides to save the boy instead. Which means closing the gates to a "ghost of a city" known as Nùrnheim. But it just so happens that the gates are the stigmata we saw earlier on the priest's hands. Keeping up?

As Cliff and Jane head to Spain to find the priest, Rita and Vic are still fighting over the former's lack of interest in being a hero, and we get some of Hammerhead's backstory; as she gets completely freaked out by Cliff's violence in Paraguay and being in a church. Before the pair can close the gates, Hammerhead loses control and they're transported to the weird grey streets of Nùrnheim. There, we meet a new (and very British) side to Jane, called Penny Farthing. But before we can get to know her too well, the two rogues are taken hostage by robed monsters. Back at Doom Manor, Kip is dousing rosaries in hot sauce and trying to protect the ragtag team in case their friends don't close the gates. Which is fortunate, seeing as we know they haven't.

Whilst Vic tries to work out a way to save his new surrogate family, Kip gives him a life lesson, revealing some unpleasant truths about Niles Caulder and the dark things that he's done in order to survive. Speaking of dark things, Larry is in the basement with Elliot, who's coming to terms with the fact his family raised him to end the world; which ends up making Larry come to terms with some stuff himself.

Larry's journey with the term hero has been one of the most interesting parts of the show. And as he tries to share his lessons with Elliot, the boy becomes angry. Larry loses control until the Negative Spirit takes over and frees the apocalyptic prisoner. This leads to an interesting reveal, as the spirit shows Larry a tape of Caulder's attempts to communicate with the being, giving Larry a little more insight into the entity inside of him. Rita is still furious with Vic, wandering around the house and insulting him, when she discovers Elliot about to kill himself. In a rare show of power and compassion, she manages to talk him out of it.

If you discovered the Doom Patrol via the aforementioned run written by Grant Morrison, then you'll be happy to discover that much of the episode is taken directly from his pages, including the terrifying Dry Bachelors: assassins made of dead skin and never-sent letters, who attack Cyborg and Kip as Rita protects Elliot in the basement. Kip once more attempts to kill the tattooed young man, but Rita harnesses her powers and manages to stop him. But the cult reach their young charge and begin to read him, freeing the Decreator. As for Cliff and Jane, they're stuck in the mythical land, housed in a snowglobe in the Chief's living room...

It's a brutal ending, and one that hints at much destruction and tragedy to come for our heroes. But you'll have to tune in next week to find out what fate has in store for them...