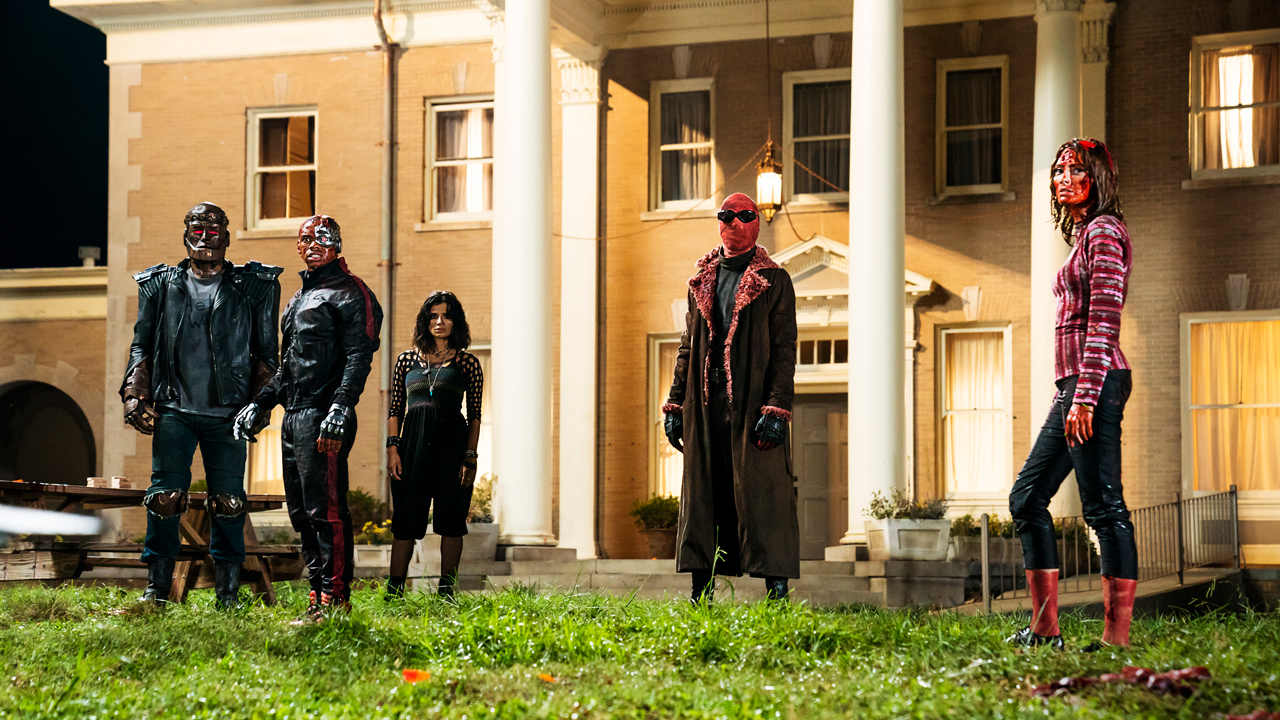 Now that you've met DC's most dysfunctional superhero team you're probably wondering how you've never come across them before. How they're so cool and strange. And also how on Earth they're going to save the town of Cloverton which was about to be sucked into a massive swirling void which was opened by Mr. Nobody and his flatulent donkey! Yes, it’s time for Doom Patrol’s second episode, “Donkey Patrol”...

When we left our band of super freaks they were trying to save Cloverton, and as we rejoin them a cockroach is monologuing, ready for the destruction of the town he apparently despises. Sadly, our new friend is quickly sucked into the widening black hole in the middle of town, as Robotman, Elasti-Woman, and Negative Man try--and fail--to save Cloverton.

Mr. Nobody is back, terrorizing Niles Caulder, and even referencing DC Universe subscribers whilst mocking last episode's most outrageous moment: the message in the donkey's fart, "The Mind Is The Limit." As Cloverton goes to hell, both figuratively and literally, Niles ends up getting sucked into the void and is quickly followed by the entire town as well as Crazy Jane, who jumps in to save him. This is a devastating blow for Cliff, who sees Jane as his only ally, and as he fumes the black hole closes up. This leaves the ex-NASCAR driver alone in the ruins with Rita and Larry, both of whom have no interest in trying to save their surrogate family, especially as they blame Cliff's desperation to play hero for the whole dreadful situation.

Meanwhile in Detroit, we're about to meet one of comics' most famous heroes and most well-known robotic champion: Cyborg. As a low-down and dirty criminal accosts a young woman at an ATM, he's faced with a strange situation as the bank machine starts to talk to him. It's a great execution of Cyborg's skills, sense of humor, and wide-reaching power that also plays as the perfect distraction for him to save the girl and catch the bad guys. As Cyborg a.k.a. Vic Stone debriefs his father Silas over his comm system he decides he needs something bigger, something stranger, and before we know it he's off to the ruins of Cloverton, Ohio.

It's not a completely random visit, though, as a S.T.A.R. Labs focused flashback reveals that Cyborg and his father have a history with Niles Caulder, one that appears to be filled with memories that Vic holds close to his heart. It looks like The Chief was a second father to the young man who almost lost everything until his father salvaged his body and made him a hero. Back at Doom Manor, Rita is trying to go on as if nothing has changed, whilst Larry tries to make a grand escape but the Negative Spirit doesn't want him to leave, leading to a very funny comedy sequence where Larry tries to get on a number of buses but is beaten by the spirit each and every time.

Cliff, meanwhile, is trying to locate the mysterious donkey which appears to have a connection to the missing townspeople, missing Niles, and of course missing Jane. As he stumbles through the rubble he comes across Cyborg, who's caught the beast and has a few questions for his fellow robot about just where Niles went and how the team messed up so badly that the entire town is now gone. Though Vic doesn't seem to put much stock in what Cliff is saying, that all changes when the donkey spits out Jane, who's inconsolable apart from saying "dead in his arms" over and over again.

Cyborg's arrival at Doom Manor reassures Rita and Larry that "a big city hero" is here and so their choice to do nothing is the right one. But as the bantering cyber-duo of Cliff and Vic team up to take on Jane, it's pretty clear that they're not a match for her 64 personalities. We get to meet a few new sides to Jane this episode beginning with Babydoll, a little girl who it just so happens is a big fan of Cyborg but is terrified of Cliff. With Vic's reassurance, Cliff leaves the pair alone.

Soon, in the bowels of the house Cliff discovers videos of Jane and her multiple selves. It's the first time we've seen Jane in the past, and as she spars with The Chief in a padded cell different versions of herself respond differently as he tries to get a handle on the woman in front of him. She also reveals that she calls the space where her other personalities live "The Underground' and that there are a whole lot people in there. Cliff uncovers a huge wall map that seems to list of tens of different personalities, and as Vic struggles to get Babydoll to tell him what happened in the void, Cliff makes a startling revelation... but it's already too late.

Vic's interrogation of Jane has led to her unleashing Katie, a fiery-headed flying super spirit who's very unhappy about all the questions and is ready to seriously hurt Cyborg as he runs through the house. After Cliff stops Vic from hurting Katie, she changes into Lucy Fugue, shooting electricity from her fingers. There's plenty of great Jane action here as we also see an awesome new personality who spits the words that she says out of her mouth and turns them into dangerous metal. Cliff and Vic finally manage to trap her in one of the manor's many rooms, whilst Larry and Rita relax outside pondering just how Jane is back with them after being swallowed up by a hole.

If Doom Patrol is all about our reluctant heroes finding their courage, then this episode really builds on that as Larry comes up with a theory about the donkey which turns out to be true. In the words of Vic, "the donkey is a door." The team quickly comes together to work out a way to get inside and try and find Niles and the lost town. For Rita, this means finally taking control of her strange powers and allowing herself to be squirted down the donkey's throat. Sadly, the donkey door is powerful and before you can say "the donkey is a door," Rita, Larry, and Vic are inside the strange beast and the landscape of Mr. Nobody's twisted mind.

As you can imagine, it's a terrifying place and once again the very meta meta-commentary begins with Nobody narrating the events, interrupted only by the heroes doing and saying exactly what he wants. Back in Doom Manor, Cliff is none the wiser and trying to connect with Jane by sharing stories of his daughter as he makes her making her PB&J sandwiches. Unfortunately for the other three members, though, their nostalgia is being preyed upon by Nobody, who weaponizes their memories. Rita falls into a trap of thinking she's back on a film set, Larry is quickly thrown back into the life of a pilot, and Vic is shown as the survivor of a home explosion that killed his mother. Intriguingly, Nobody claims that Vic's house fire origin is a lie and the truth is far more horrifying.

In what is easily the most violent and mystifying sequence of the series so far, Silas Stone is operating on Vic whilst the young boy is awake and screaming. It's like something from a torture porn movie and implies that Vic's origin and his father's obsession with him joining the Justice League might not be as innocent and wholesome as they seem. Incredibly, just as the team is about to succumb to the faux horrors of their past, the Negative Spirit escapes from Larry's body, saving the heroes and the town, with everything being ejected from the donkey in a wild splatter. R.I.P. donkey and hello again Cloverton!

In the episode's final moments we get a few big character beats, as Vic refuses to leave the Manor with his father who's tracked him there after realizing that Nobody is afraid of the team working together. Larry finally becomes one with the Negative Spirit, and in a moving sequence he reveals his scarred face and tries to make a connection with the... thing inside him. Rita even starts to realize that her superheroism could once again see her regarded as a star, and as we leave the team we get a glimpse of Jane painting a horrifying portrait of what might be the Doom Patrol's future…

Are you a Doom Patrol fan? What did you think of “Donkey Patrol”? Let us know in our Community!