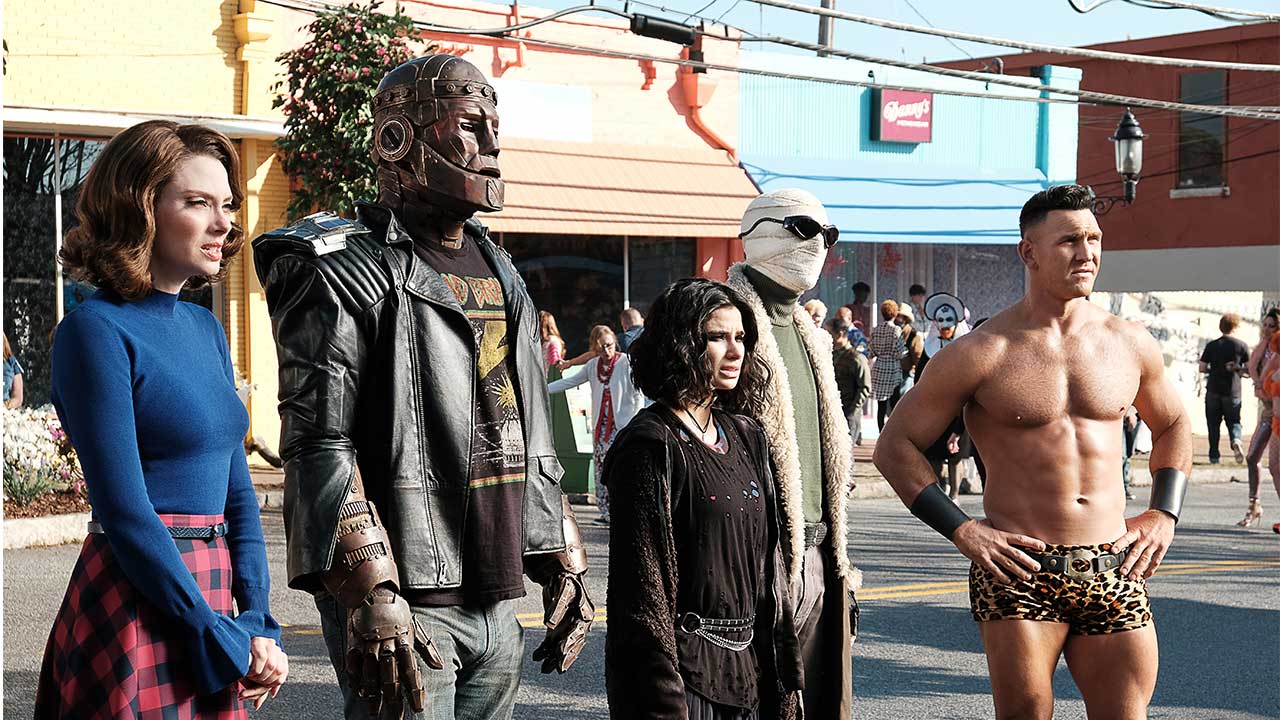 As the title of this week's episode suggests, only one more episode of the first season of DC Universe's Doom Patrol is left before the fate of the team and its fearless leader is revealed. And this week the folks behind the show do a great job of setting up a potential second season for this strangest of all superhero series. Here are five things we learned from "Penultimate Patrol"...

The Brotherhood of Evil Cometh 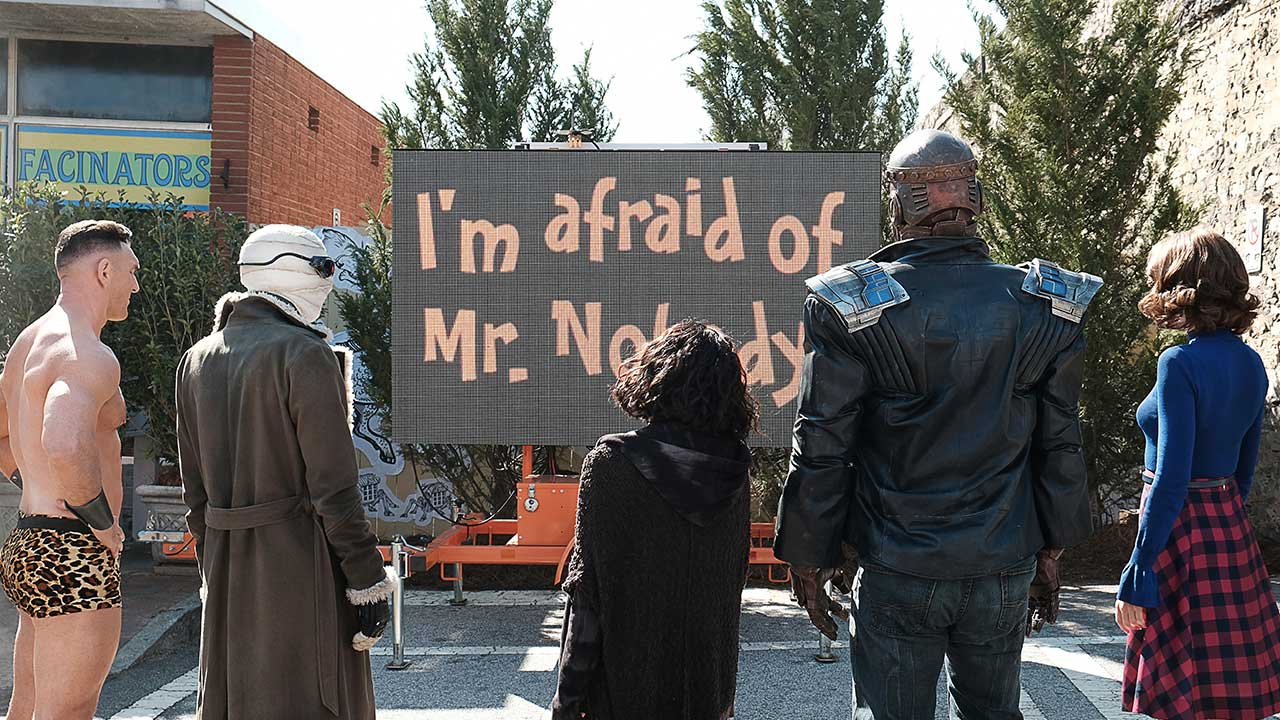 The biggest bads in the Doom Patrol comic canon have not yet been seen this season, with Mr. Nobody shouldering the responsibility of core evildoer. But in two key sequences this episode, viewers got a hint of what's to come, as the Brotherhood of Evil finally get a mention. In an early scene between Mr. Nobody and his ex-lover, the pair share a distressed conversation about the fact that he's been let go by the super-villain team only to be replaced by a gorilla. Fans of the Brotherhood will likely know that the Francophile ape who's referenced is Monsieur Mallah, a bilingual baddie who has at times been a core part of the nefarious team of villains. It's pretty likely that the team will show up in season 2, especially as they're mentioned again in the nightmarish time loop created as punishment for the Patrol by Mr. Nobody. Seeing as this series has taken so much from Grant Morrison and Richard Case's Doom Patrol run, we could well see the Brotherhood take on a different name inspired by a famed art movement -- the Brotherhood of Dada. Whatever happens, it's clear the Brotherhood could be a big problem for the Patrol.

In a moment that saw a comics-accurate version of the Doom Patrol come together, fans got to see Rita, Larry, Cliff, and new addition Flex Mentallo team up with the gender-fluid sentient roadway Danny the Street. In the comics, Danny was a regular member of the Patrol and often housed Doom Manor and its inhabitants. This fleeting but vital moment hints at the team we could see more of in a second season. The comic-book iteration of the team has often changed and grown, so it makes sense that the group would get bigger as the narrative moves ever forward.

Flex Mentallo, Hero of the Episode 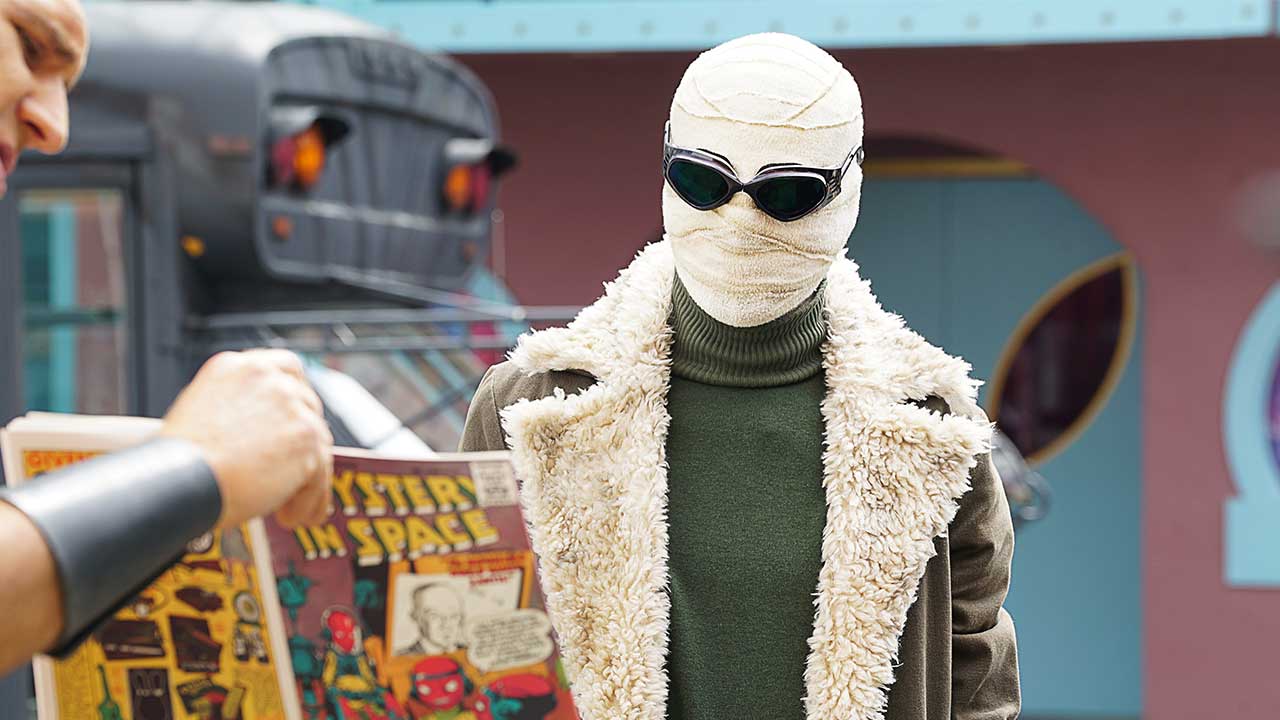 He may be better known as the Hero of the Beach, but in "Penultimate Patrol" Flex Mentallo is undoubtedly the hero of the story; as he utilizes his strange Powers of Muscle Mystery to help the team locate the Chief. After Danny is convinced to reveal Niles' location so the Patrol can finally put an end to Mr. Nobody, Flex explains, in a very fan-friendly in-joke, that the leader of the team is being kept in the White Space, the empty gutters that surround the panels of a comic book. With Flex's help and his magical muscles, the team is transported into the White Space where they find Niles, and -- as is always the way -- a whole lot more trouble.

The Sad Story of Cyborg

One of the biggest mysteries of this season has been the origin of Cyborg. Despite the fact that tread seemed to have been resolved after Vic beat his father half to death at the behest of Mr. Nobody, in "Penultimate Patrol" we discover that the reason it was so easy for the villain to play on Vic's fears was that they were grounded in truth. In a heartbreaking moment, Silas Stone reveals to his son that his mother didn't die at Vic's hands but instead survived. Silas had made the choice to save only his son at the suggestion of one Niles Caulder. Take note of that detail, it's important.

The Dark Truth is Revealed

Grant Morrison and Richard Case forever changed the team when they took them on in 1987's Doom Patrol #19. They shaped the group into the meta-mess that fans have come to know and love, but they also added a dark twist to the team's origin. It's a moment revisited here, and it sets up one of the bleakest reveals of the season. In Doom Patrol #57, Morrison and Case revealed that the Chief had actually been behind all of the so-called accidents that created the super-weirdos. It was a brutal shift in the story but one that actually made a lot of sense. In an Earth-shattering moment on screen, Niles is forced to come clean about the fact that he was behind every single horror that made the heroes who they are.

On that note, we leave our heroes. But with only one episode to go, many questions remain. You'll have to tune in next week for "Ezekiel Patrol" to find out just how much damage the Chief's revelation has caused, and to see the return of familiar insectoid face...