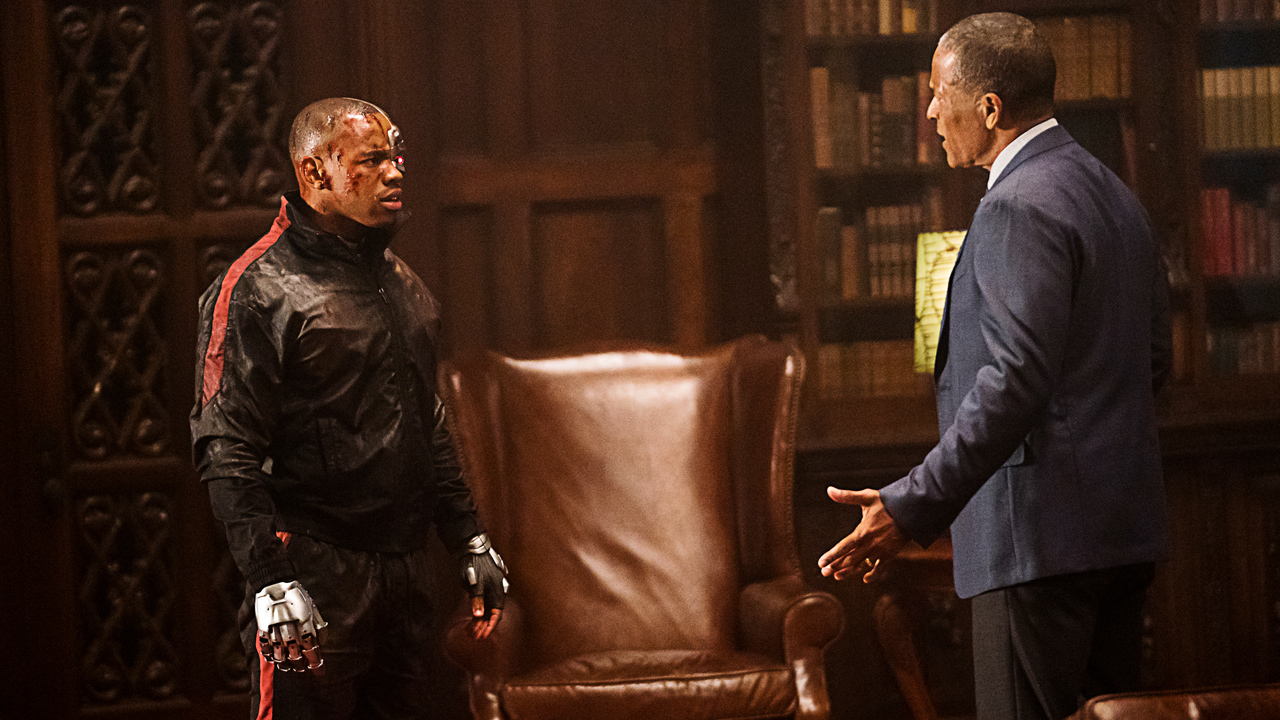 Phil Morris is no stranger to hardcore DC TV fans, having voiced such characters as Smallville's John Jones, Justice League's Vandal Savage (in "The Saveage Time"), and Green Lantern: The Animates Series' Saint Walker, as well as Justice League: The New Frontier's King Faraday. The veteran actor takes on yet another classic DC character in this week's episode of Doom Patrol, "Donkey Patrol". Playing Dr. Silas Stone, the father of Cyborg Victor Stone, Morris embodies one of DC's leading super-geniuses -- and the man responsible for the technology that fuels the fan-favorite Doom Patrol member! Here's what Morris recently had to tell us about his role, and his love of all things DC...

It’s a special pleasure to speak with you, because you've stated many times that, like so many of us, you're a huge fan of DC.

What were some of your earliest experiences in the DC Universe?

I’ve been collecting comics since I was six years old. I still have the first comics I ever bought. DC and Marvel were the bibles for me as a kid. It’s how I learned to read. It’s how I learned to imagine, to envision certain universes beyond my own. Those colorful pages, they made such an impression on me as a child. I never gave them up -- won’t, will not, cannot. Batman was my favorite character, because he was human, as many people say. But I love Superman, because I’m the kind of guy, Joe... If I woke up tomorrow and I was floating above my bed, and I looked down, and there were six feet and I was just floating there, I'd look up and go, "I knew it! I knew it! I knew it!" That’s the guy you’re talking to. So DC, that universe and those characters, made all kinds of sense to me.

You’ve played numerous DC characters before. Were you familiar with Silas Stone?

Oh yeah. Yeah, I’m familiar with Silas from the Cyborg comics, and probably peripherally from the New Teen Titans comics. That’s the Silas that I really relate to, and that’s what I’ve used as my reference for this particular character. I haven’t really gone back and read every issue of every comic that Silas Stone has been a part of. There’s a part of it that you want to create yourself. You don’t want to have it so set in a universe that was created before you started. It’s just like I’m not going to recreate Joe Morton’s character [from the Justice League movie]. I’m not going to recreate Carl Lumbly’s vocal work [from Justice League: Gods and Monsters]. I’m Phil Morris. I have my opinions, my own take, and to take too much on...you can be in danger of mimicking and imitating. That’s not what I want to do.

How would you describe your take on Silas?

My take on Silas and how I’ve been kind of directed to play Silas is distant. He has a higher agenda than Victor knows, and Victor could never know it because he’s not Silas. He’s not a father. He’s not a father who almost lost his only son after having lost the love of his life. So the way I’m playing him is... What Silas is doing to honor his dead wife’s memory -- and that is strong and that makes Silas a little less emotionally connected to Victor, and more concerned with his survival and his safety, for fear of losing the last person on Earth that is his family -- it creates a certain distance emotionally that Victor doesn’t understand. That he doesn’t like, and that he questions. Silas doesn’t question it one iota.

What does Silas think of The Chief, who serves as a surrogate father to the Doom Patrol?

I don’t think that Silas is threatened by much. I think he’s completely egotistical. I don’t think he sees Niles as a viable threat either as a father figure to Victor or as a scientist. But I think that Silas feels that Niles has lost his way. That Niles has associated with ne’er-do-wells and a darker faction of the world in order to substantiate his questionable science. Silas’ science is not questionable at all. It’s meant to help mankind, and he’s not sure about Niles’ agenda.

When you’re playing a super genius, do you draw inspiration from the real world or do you look inward?

It’s a little bit of both. I’m familiar with playing fairly smart guys. My dad was in the original Mission: Impossible in the '60s. I played in the new Mission: Impossible in the '80s. I’m familiar with a man who deals with technology and inorganic matter, or organic matter, and exclusively has relationships with science and technology as opposed to human beings. That’s more of what I’m playing. I don’t know how to play super genius. I know how to play a human being, and a human being who is a super genius is just a cat or a woman who’s OCD about science. So I play the OCD.

What are your favorite DC movies, comics, and TV shows?

The entire Neal Adams/Denny O’Neil run of Green Lantern/Green Arrow. That's phenomenal. I got a chance to meet Neal and have him sign my books. He's fabulous. I even visited his studio in New York City. He was working on one of the Batman books at the time. Any Neal Adams stuff I loved. I really loved all the movies that were made by Christopher Nolan, whom I also met, at a Christmas dinner, and was able to tell him how much I enjoyed them as a fan. At the time I was doing Smallville. But I love those. I love the reworking of the Batman tale in Batman Begins. I just love Heath Ledger in The Dark Knight, and I really did enjoy Christian Bale. I loved all the actors in that. That’s my favorite Batman movie run, more than the Tim Burton stuff... I also enjoyed Smallville. What I liked about Smallville, beyond me being on it, was that I thought they did a very smart thing. I didn’t always agree with it, because it wasn't always my taste, but what I thought they did that was genius was create a certain melodramatic relationship between Lana, Clark, and Lex. It brought in a whole audience of young women who would not have come to this show if it was only about servicing Superman comic book fans. It opened up the audience so that they could come to it with new eyes. They could revisit what we think we knew with a newfound understanding of what Clark went through growing up. I thought it was genius. That’s why the show was on for ten years... So those are a few.

What are your thoughts on Doom Patrol? On the experience of working with this show's cast?

They are, all of them -- to a man and woman -- absolute gems. They’re very excited to be doing this show, first of all. They get it. They get that it’s special. They get that being these characters is special, and they take great pains in trying to get it right, and trying to get it uniquely right. I worked with Timothy Dalton for the first time when I got here, and it was great. I heard he was a wonderful cat. He’s a beautiful man. I loved him... I don’t want to say that the actors in other shows are not talented actors -- they are -- but Alan Tudyk and Timothy, and I hope myself, to a degree, bring a prominence, bring a patina, through our experiences, our journeys, as actors; that we can lend to this universe. That I think gives it a certain texture, and a certain taste and feel and smell. That’s a little bit more authentic, a little more unique, than we’re used to seeing in some of these offerings. Watching the first episode, because that’s the only one I’ve seen, I was blown away, as a fan. I would watch this show regardless of whether I was in it or not. It’s interesting. It’s beautiful. The characters are full and refreshing. They’re not retreads and rehashed characters that I’ve seen a million times. They’re fresh, they’re new. I want to follow their journey; and that’s the basis of any good series.

What are your thoughts on this show's version of Cyborg?

This Cyborg, from what we’ve been playing and you’ve seen, what you will see, is the linchpin to the greater DC universe -- to the Justice League characters, Teen Titan characters -- that you’ll maybe see us bring in. I don’t know. I don’t know what’s down the line. But I think he’s the gatekeeper to that. He’s the doorway to all of that, and he’s kind of there to help the Doom Patrol coalesce as a team. I don’t think he’s got an easy job at all. He’s there to try to get them to work together, because obviously they’re stronger together than they are alone. He being Victor Stone has learned that through his work with the Justice League. That's very much what you see in Cyborg. He’s morally forthright and his compass points north, yet he’s flawed. He’s as flawed as any of them, based on his relationship with his father. So he brings that to the table as well. He can relate to a lot of what they go through psychologically, and the cat who plays him, Joivan Wade, he’s fantastic.

I’ve got to ask you about some of your other DC roles, including those in Justice League and Green Lantern: The Animated Series. Among your DC roles, do you have a favorite?

That’s not an easy question, because I’ve played so many great characters. Vandal Savage in Justice League is great. King Faraday in Justice League: New Frontier is great. Such a great character from [writer-artist] Darwyn Cooke, God love him. Before he passed on, he drew me a King Faraday when we were at a convention and he gave it to me. He was like, "This was my favorite character in New Frontier. You’re my favorite character." I was like, "Darwyn, thank you..."

Before I did John Jones for Smallville, I had a scene as King Faraday opposite Martian Manhunter in The New Frontier. So that was super interesting. Green Lantern: The Animated Series' Saint Walker’s a favorite of mine. Because when I got it I said, "Explain this character to me. What are you looking for?" They said, "He’s like a venerable kung fu master." I said, "Wait a minute, you’ve got to know I studied kung fu?" They were like, "No." I was like, "Yeah. I have been given the title of master, actually." They were like, "What?!" I said, "Yeah..." As I was playing Saint Walker, all I thought about was my teacher. All I was channeling was the teacher that I have. And I love Saint Walker. I think he’s a gentle soul who’s got this great connection to the universe. It was wonderful to play him. I loved playing Imperiex for the Legion of Superheroes. That’s the first job I did for DC. Those are a few that I think are indelible and are super interesting.

As are you, sir! Thank you so much for your time.

Thank you so much, buddy.

We look forward to seeing you again in the DC Universe!

Are you a fan of Phil Morris' work? Let us know in our Community!