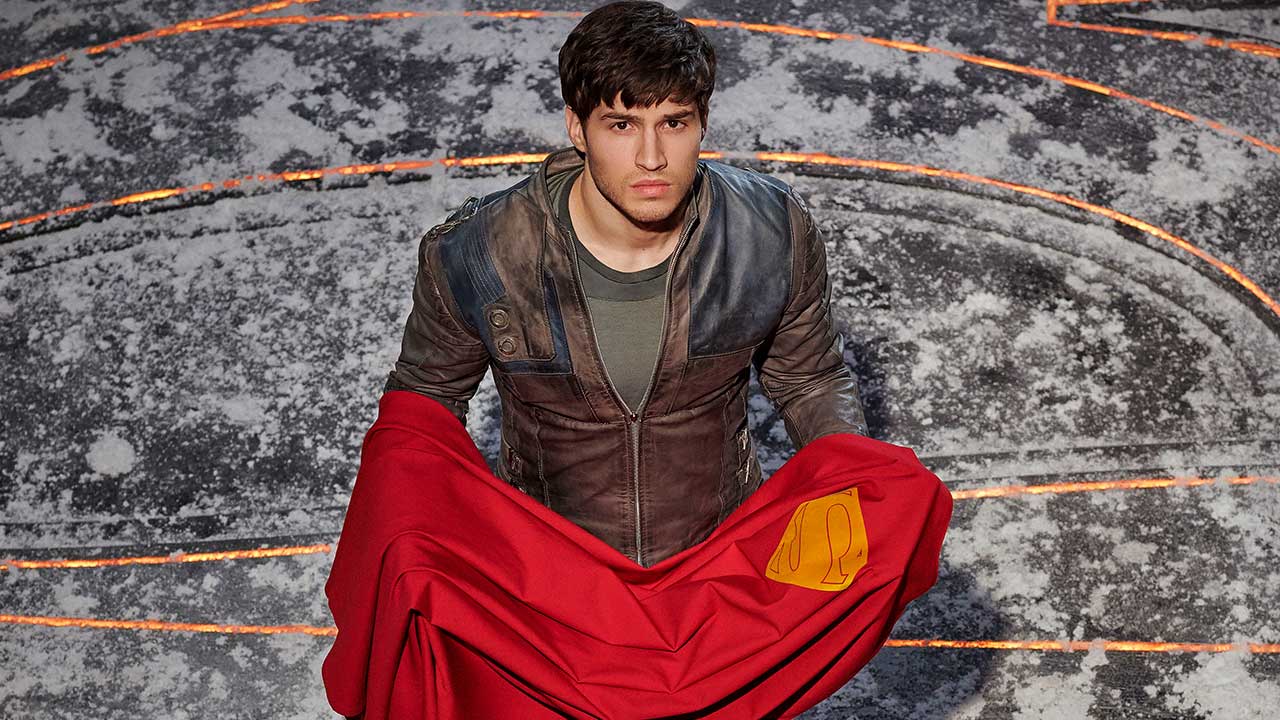 Superman celebrated his 80th birthday last year, but it was the Man of Steel's fans who got a present -- in the form of TV's Krypton. Delving deep into the history of the House of El on the titular doomed planet, the show stars Cameron Cuffe as Seg-El, grandfather to Clark Kent/Kal-El. No stranger to the DC Universe, Cuffe was raised on a steady diet of DC animation and classic comic series. With the entire first season of Krypton now available to binge on DC Universe (and a second season arriving on Syfy this summer), we sat down to chat with its affable star. Here's what Cuffe had to tell us about adding to the legacy of a legend, his own love for the Man of the Steel, and why Krypton may not be what fans expect from a Superman prequel...

We hear you're a lifelong fan of DC Super Heroes...

I grew up in the time of the great animated series. I grew up with these characters -- Batman, Superman, Wonder Woman, Green Lantern -- in my house every morning. From there, it was a very natural segue into comic books, because those shows were so great, and the characters were so real. Then you dive into the comic books and you see how deep the mythology is, and how much of it is based on personal relationships, and hope, and courage. I was quite a lonely kid growing up. I lived in my imagination a lot, so for me, those characters were there for me in a way that sort of nothing else was, and they taught me a lot about right from wrong, and how you should be good to people and how, if you can, you should make a difference. So I’ve always loved comic books. They’re immensely important to me. I like to think I understand why they’re important to other people too.

Because Seg-El isn’t as well-known as Kal-El, do you find that, in addition to bringing your own love for this universe to the role, you're able to really craft it and make it your own?

Absolutely. I think the wonderful thing about doing a job like this is that it’s entirely unique in that you are part of something that is so much bigger than any one acting job. You’re part of a massive multiverse that means so much to millions of people. Because I feel that and I know it so well, I’m able to have fun with that, and able to put little tributes and homages, and certain things in Krypton, that people will see as they watch it.

Can you give an example from Krypton's first season?

What is it about Krypton that makes it appealing even to folks who didn't grow up with the comics? Where do you think the show's power lies?

I think it’s a wonderful twist on what you might expect of this story. The thing I always said before it came out was "This is not the show you expect it to be." The people who work on the show, we love it. We love Superman. We love the DC Universe. And there’s a way to present a story that says, "We know this mythology. We care about this mythology, and this is our best science fiction story." In many ways, this show was devised as a way into the cosmic realm of the DC Universe. This show is an Elseworlds story, and I think it’s very, very different from anything you have seen come from the DC Universe before.

Was there a depiction of Krypton and the House of El in the comics that you found useful in prepping for this role?

Yeah, very much so. The wonderful thing about it is that there’s so much mythology to choose from. For me, the most helpful in terms of really getting under the skin of a Kryptonian was the "New Krypton" arc, because you’re able to see how they are different from humans, how similar, and yet how alien they really are. And to see the structure of that society, and the guild system, and the way that they treat each other, and the way that they don’t think about certain things the way humans do, I found that to be really, really helpful and really fascinating. 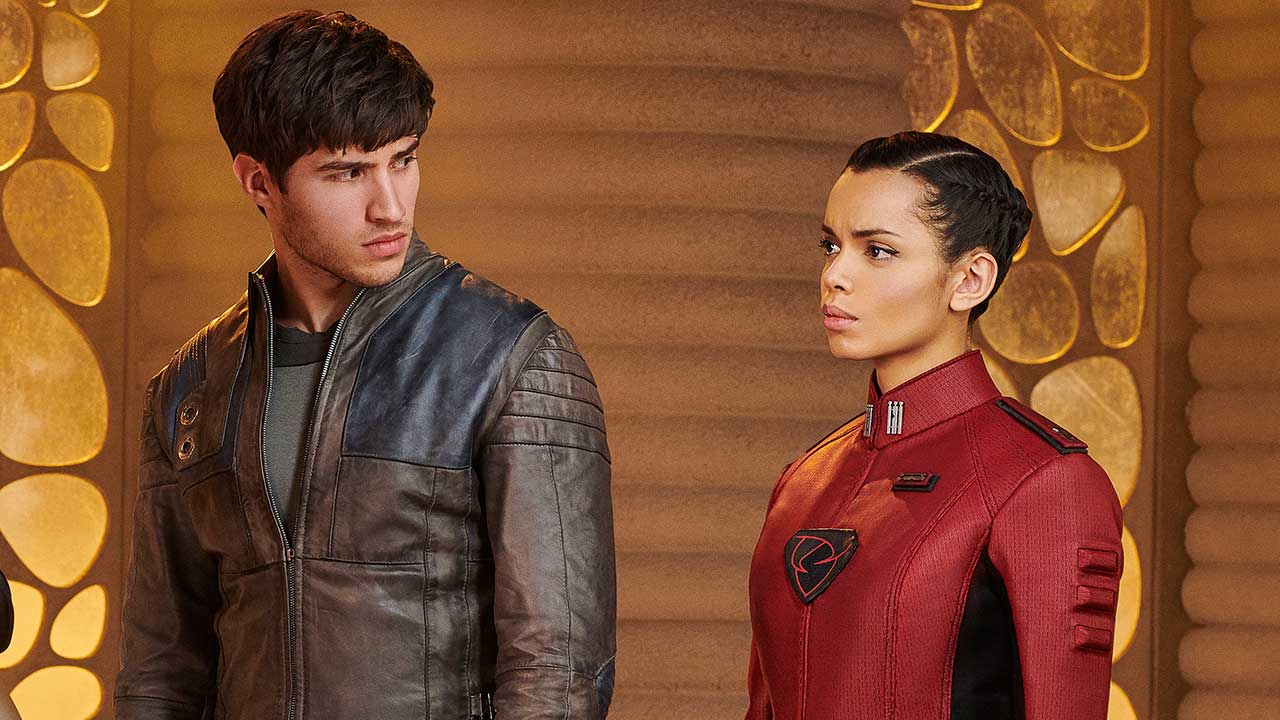 The show has an impressive cast. And you and Georgina Campbell, who plays Lyta-Zod, have a great screen chemistry...

Yeah. We’ve got an amazing cast in this job, and working with George has been such a pleasure. I’ve learned so much from her, just as an actor, and to see her step into the role of a member of the House of Zod has been extraordinary. I get a front row ticket to that every day, which is amazing.

Were you at all surprised when you heard your character would have a close relationship with a Zod?

I think the thing is it made sense, because we’re true to the spirit of those characters... I remember doing my first scenes with Blake Ritson as Brainiac, or when I’m debating, as Seg-El, with General Dru-Zod...  When you have those moments, you're like, "This is ripped straight out of the comic book. I am here with this character, and I am facing him the way Superman would," it’s an honor for me as a fan; and as an actor, the writing is so good, it’s great to play.

Regarding Krypton's second season, what can fans look forward to?

Yeah. I think with season two, we want to embrace our roots as a science-fiction, comic-book show even more. The stakes are higher. The characters have grown and evolved, and we very much want to keep the idea of consequence and continuing story in there. But it’s exciting, it’s fun. The scale is epic, and we’re really, really excited about it. I’ve never been more excited about anything, and I’ve never had more fun doing something.

Last year we celebrated the 80th anniversary of Superman. Why do you think the legend has endured for over eight decades, amidst the radical changes in American history that have occurred throughout that time? 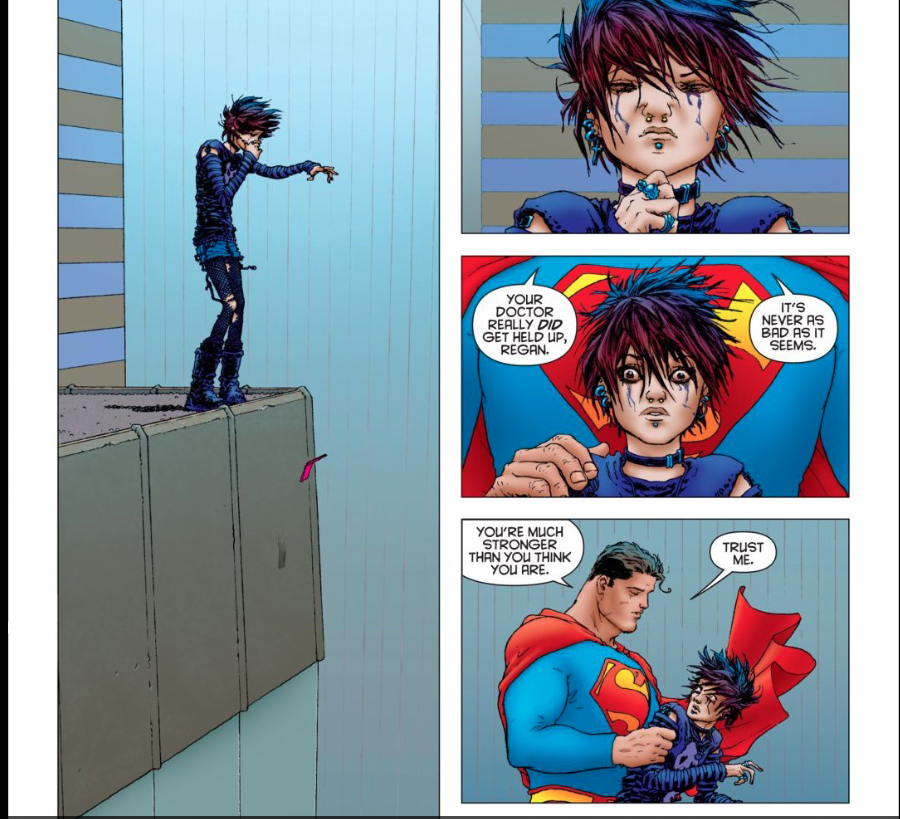 Yeah. Superman appeared in a time when the world was a scary place, and we needed him here. We needed someone who would stand up for us. I don’t think it’s a surprise that he became popular, and I think the wonderful thing about Superman is he’s the most relatable superhero. Yes, there are people who say, "He’s an alien demigod. How could you possibly relate to that?" But the most wonderful thing about Superman is that he sees the best in you. I think the greatest Superman moment of all time occurs in All-Star Superman. It’s five panels. There’s a woman on the ledge of a building, and Superman’s there, and he just says, "You are much stronger than you think you are." I think everyone will have an opportunity to do that. Everyone will have the opportunity to tell someone, "There is hope." Everyone has the ability to believe in someone who doesn’t believe in themselves. That is being a hero. That is the message of Superman, and that to me is why he’s important, and why he’s endured, and why he’ll always be important.

You know your stuff.

One often hears Superman described as a messianic figure. Do you see Seg as someone who also serves that role?

The wonderful thing to me about Seg as a character is that... There’s the great past of the House of El. These incredible revolutionaries, and scientists, and philosophers, they're all great champions of truth and justice. Seg doesn’t see himself as any one of those things. He’s just a guy, but he’s a guy that history has called upon. So he needs to deliver, and he sort of thinks, "You know what? I’m not that special, but there’s no one else who can do it, so I might as well." That, to me, is immensely compelling, and it’s really fun to play. He’s a very flawed character, especially in season one. He messes up more than he succeeds. But it’s about him learning, and growing, and trying to fulfill that symbol and everything that it means.

Did you draw on any real life inspirations or influences in bringing Seg to life? For example, was there a moment in your life, when you, like Seg, had to overcome doubt and rise to the occasion?

Oh yeah... I think the thing is when you’re doing something that’s this big... It’s Superman. It means so much to so many people. So of course there was pressure in taking on this role. But I think you use it. You say, "Okay, this means something to me. It matters to me," and you let that ground you. Let it keep you humble. Because it’s a wonderful thing that we’re a part of. As with everything, you do it because you love it. I love this; and, in the moment I remembered that, I wanted to do the best job I possibly could. It was all good from then...

What moment in Krypton's first season are you proudest of?

This is a big spoiler, but... I think the show really turns at episode five. As I said, we always said this show was not the show you expect it to be. In episodes five and six, we reveal the big twist, that Brainiac isn’t the villain who’s come back in time to destroy Superman’s legacy. It’s General Zod. General Zod has come back in time, not to destroy Krypton, but to save it; and he reveals to Seg that Krypton is doomed. All of a sudden, Seg becomes aware of the future, of what it really means, what the legacy of Krypton actually is, and the blood price of that. It leads our characters into completely different territory, and their relationships change, and the stakes change massively. That is the thing that makes the show utterly different from anything you’ve seen before.

Are you a Krypton fan? Let us know in our Community!