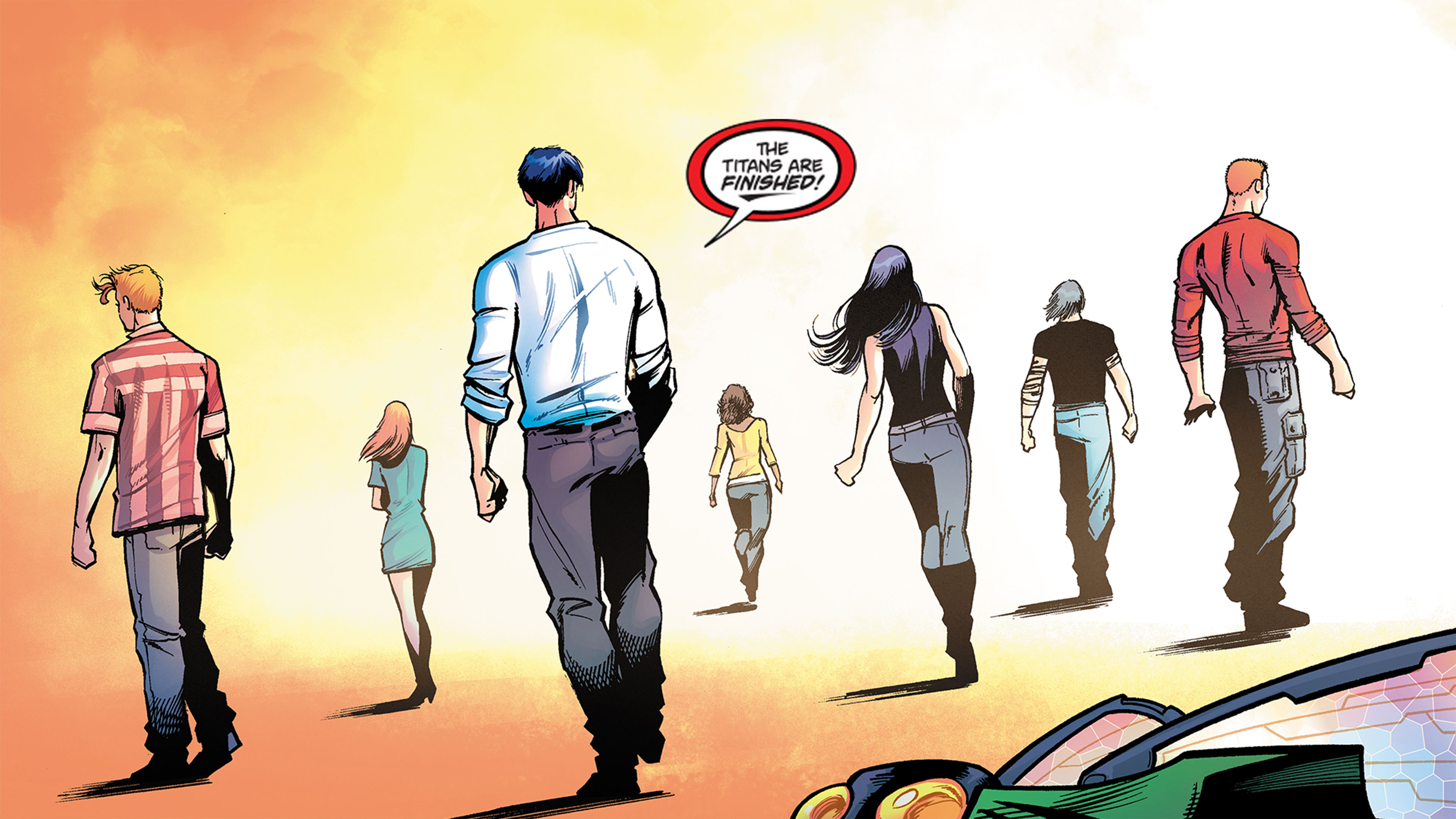 Titans (Not) Together: Every Teen Titans Break-Up

Titans together, right? Unfortunately it’s not always that easy. Apparently putting a group of young superheroes in close quarters for long periods of time can cause tension. If you’ve been following season 2 of DC Universe’s Titans, you know that the current group is having a spat and seems to have split. But team leader Dick Grayson shouldn't feel too bad, as this has happened countless times in the comics, and the team has almost always reunited. Here’s an abridged history of all the Titans comic break-ups... 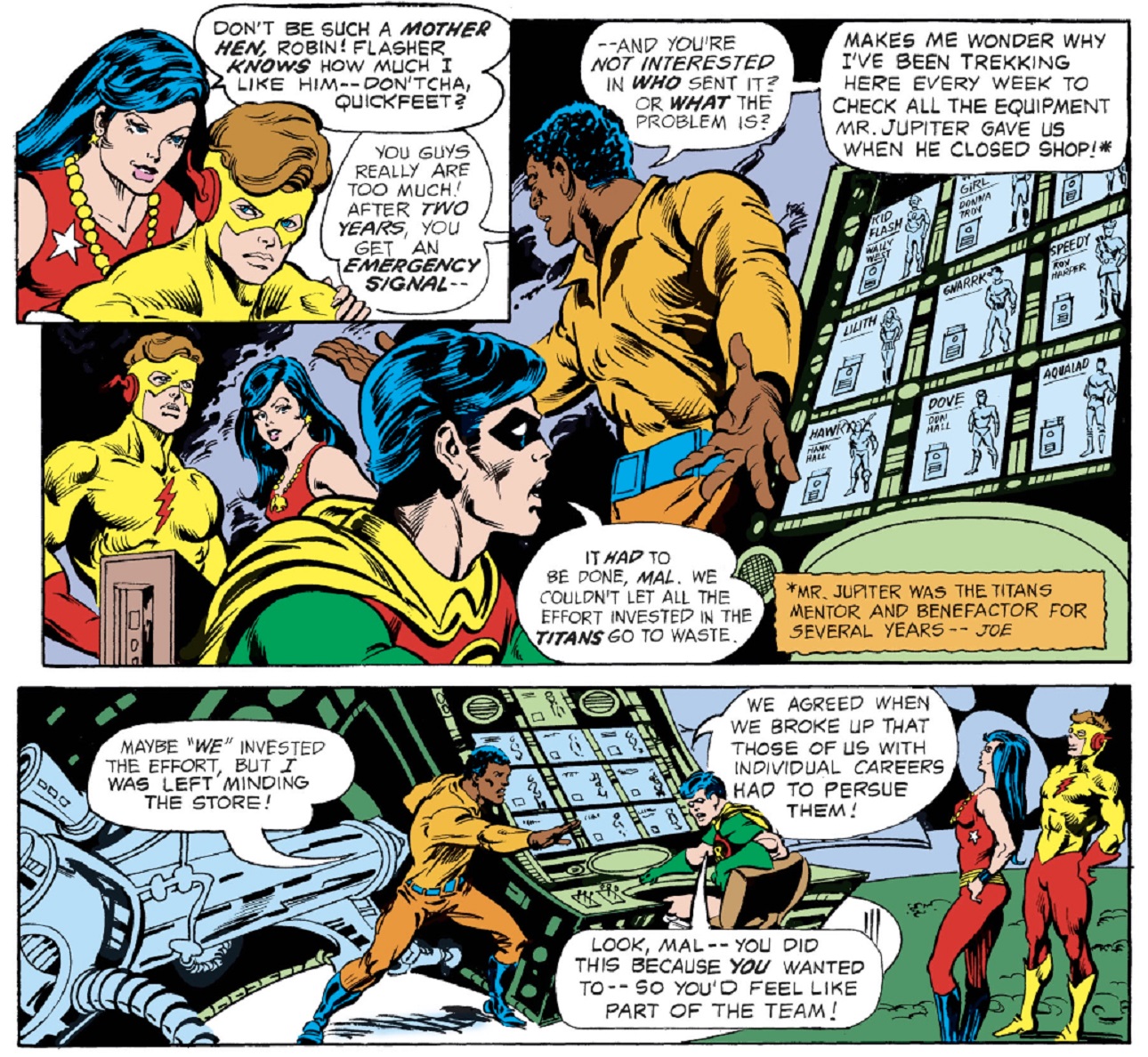 Why They Broke Up: The Teen Titans mentor Loren Jupiter closed up shop and moved on to other things. Without their benefactor to keep them together, the team drifted apart and decided to concentrate on their solo careers.

Who Dropped the Ball: Honestly, everyone but Mal Duncan. He was the only one who made any attempt to keep the team together. He maintained the headquarters and tried to keep track of every former member. 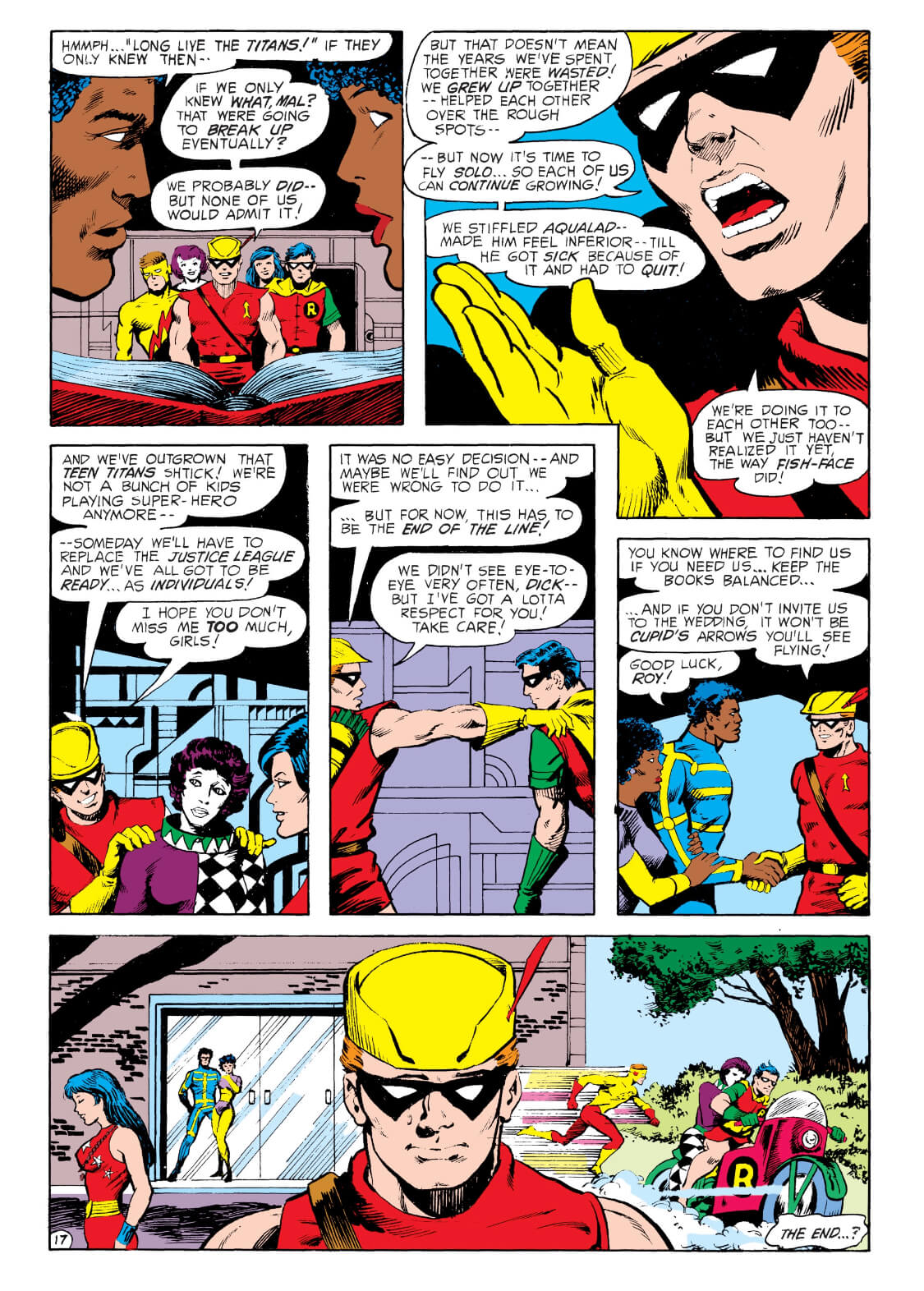 Why They Broke Up: Aqualad quit because the team made him feel useless and the group overreacted. Speedy wondered if the group was pushing its members down and randomly announced that the group was dissolving mere seconds after Mal and Karen recounted their origin.

Who Dropped the Ball: This one is all on Roy. He just burst into the room and told everyone the team was over. In the context of the story, his proclamation came out of nowhere. 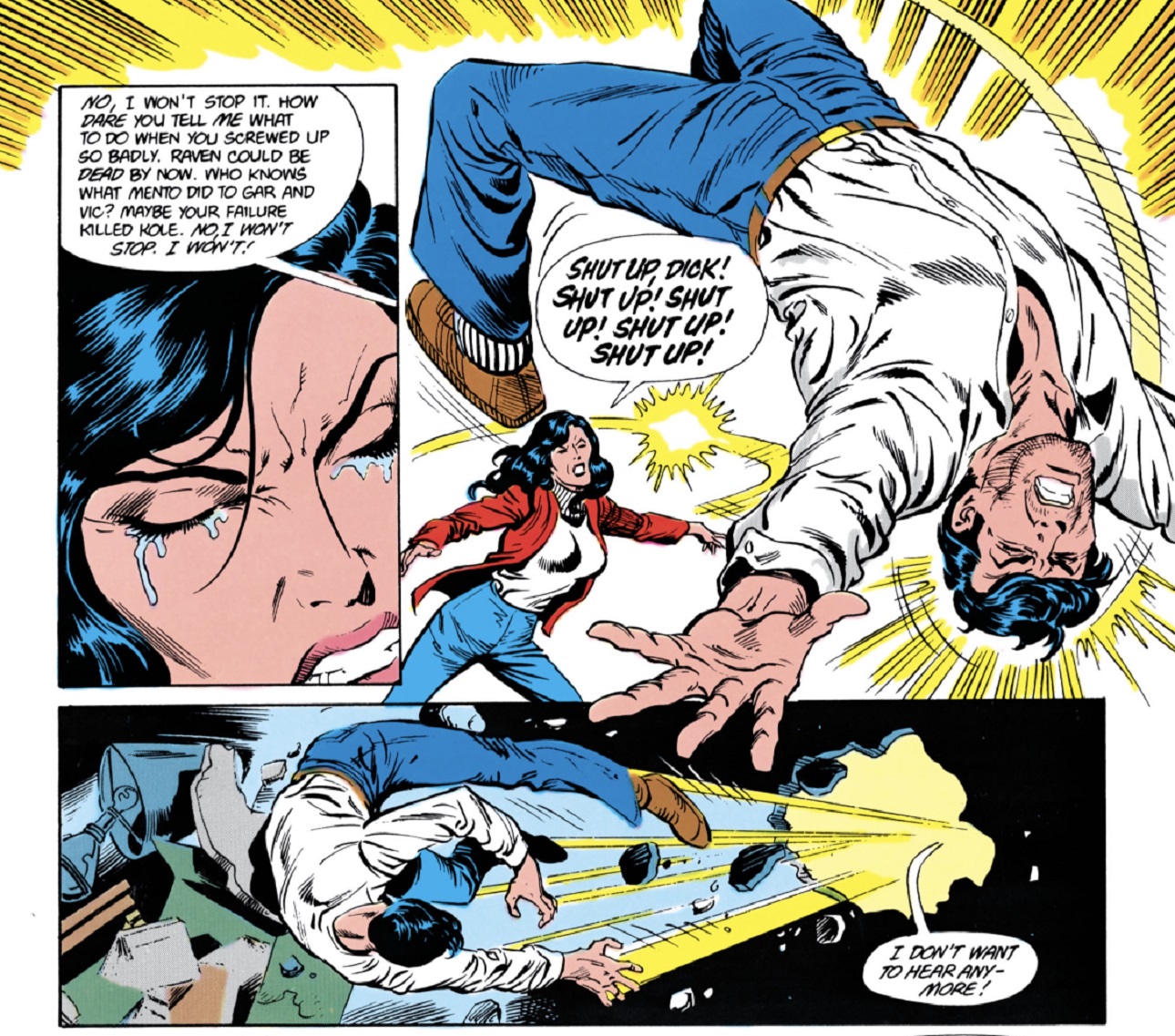 Why They Broke Up: Jericho, Starfire, and Nightwing went on a mission to Tamaran, and Wonder Girl was left in charge of the rest of the team. During this period, Kole was killed, Cyborg was injured, Changeling’s father went nuts (leaving Gar to go off to find him), and Raven was kidnapped by Brother Blood. Nightwing blamed the bad fortune on Donna, and the two had an explosive argument. Punches were thrown and walls were broken. By the end, there was no team, and Donna was forced to recruit a team of Temp Titans.

Who Dropped the Ball: Nightwing and Wonder Girl were both at fault here. They were too busy bickering like divorced parents and neglected to bring their wandering members back together. 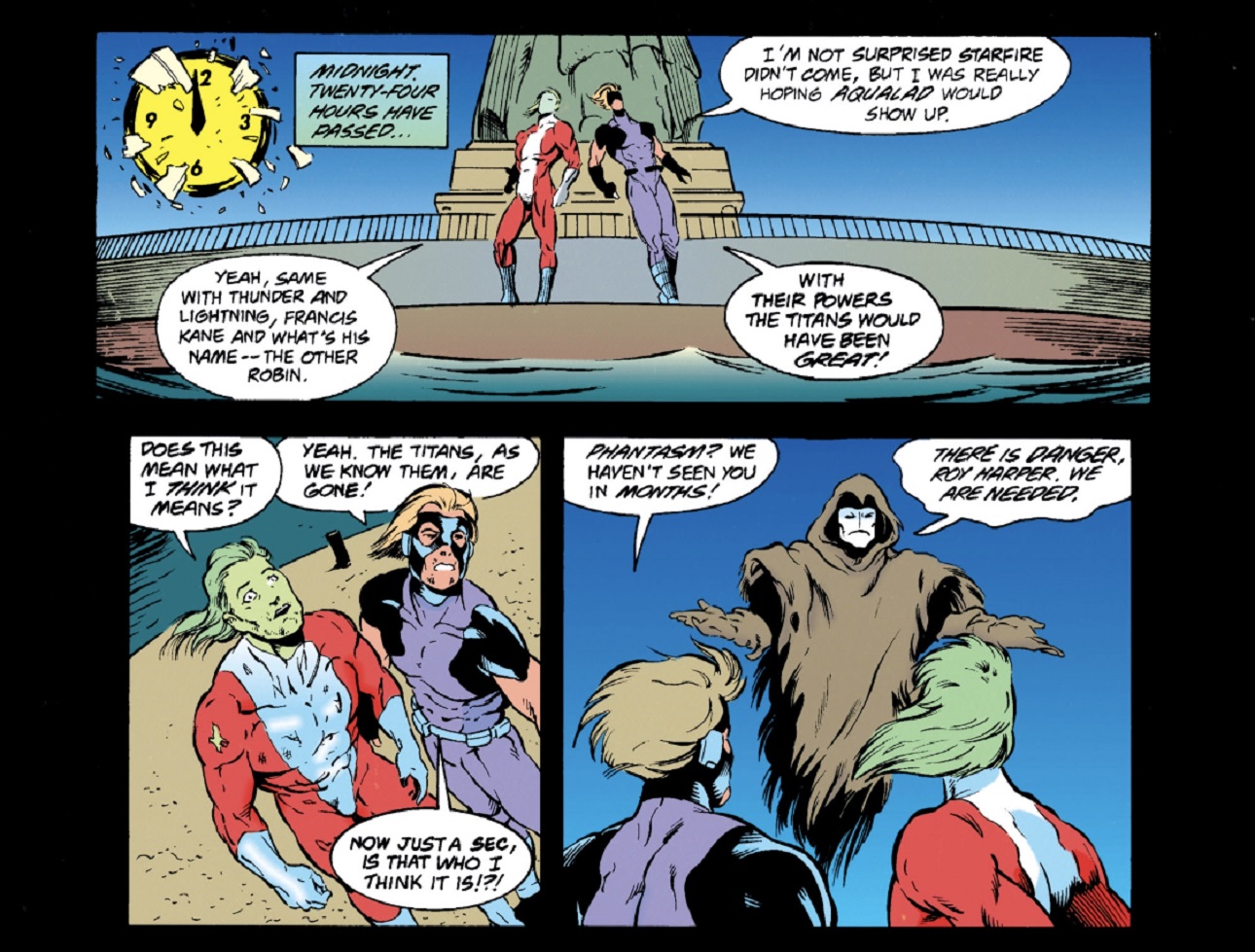 Why They Broke Up: After the Titans got into some PR nightmares, Arsenal agreed to let the government subsidize the group. Nightwing (who had been ousted as leader during a coup) and some of the other members were uncomfortable about the strings that might be attached. Longtime members wound up moving on for various reasons, leaving Roy and Changeling to recruit a new team.

Who Dropped the Ball: Once again, this one is on Roy Harper. He put the Titans in bed with the government and it drove their members away. 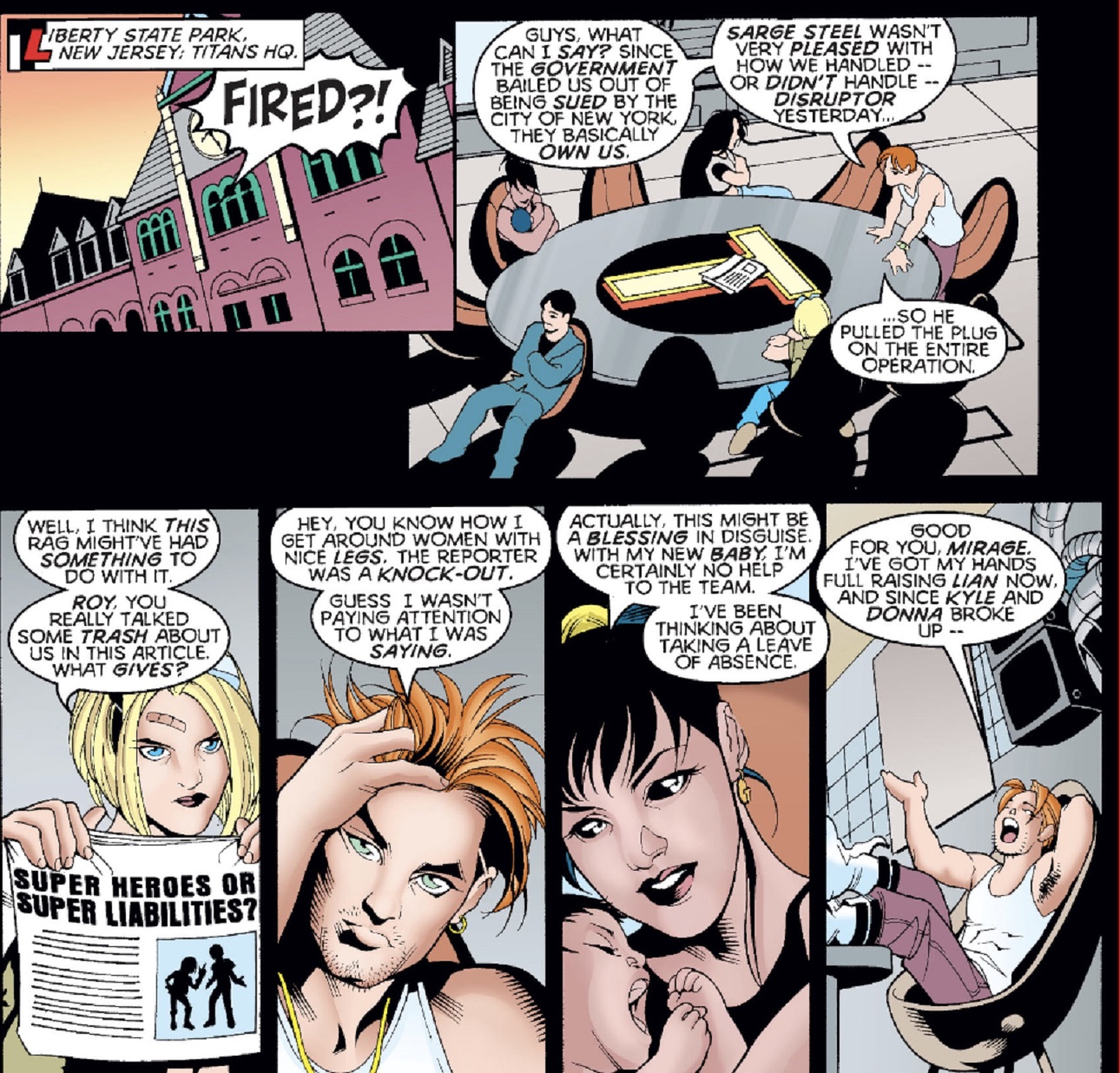 When They Broke Up: Titans Secret Files #1

Why They Broke Up: Since this version of the Titans was run by the government, they had the power to do anything they wanted – including pulling the plug. When Arsenal’s group got sloppy due to in-fighting, the government washed their hands of the team and shut them down.

Who Dropped the Ball: Apparently Roy Harper again. This guy just can’t get it together! Everyone warned him about putting the government in charge of the Titans, and he still went all in. 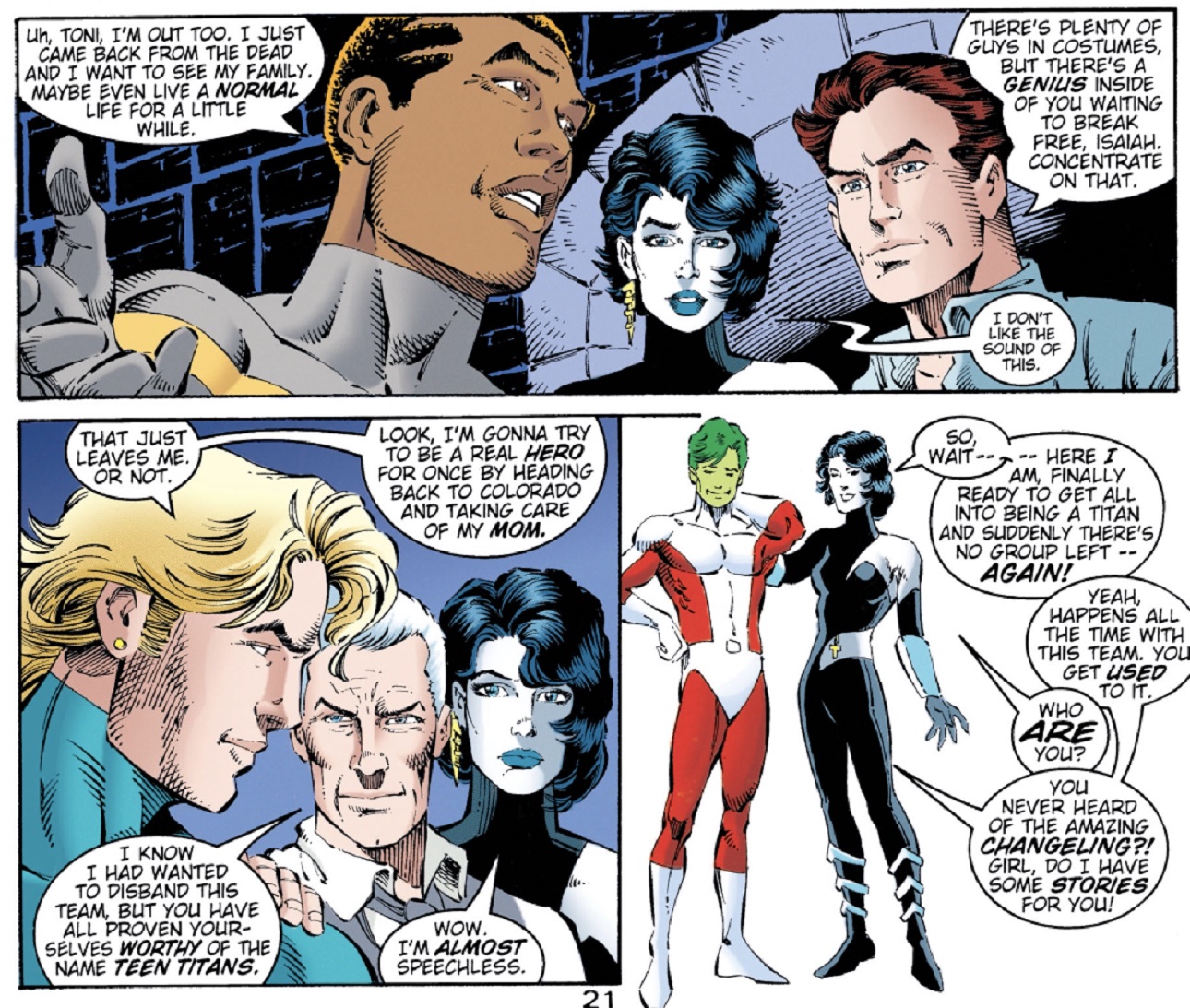 Why They Broke Up After a series of adventures, Ray Palmer’s Titans found themselves pulled in different directions with nothing holding them together. This group parted on good terms with positive feelings towards each other.

Who Dropped the Ball: Amazingly we can’t blame this one on Roy Harper. Ray Palmer probably could’ve done a better job of keeping things structured and together, but we’ll give him a pass since he was going through his own problems at the time. 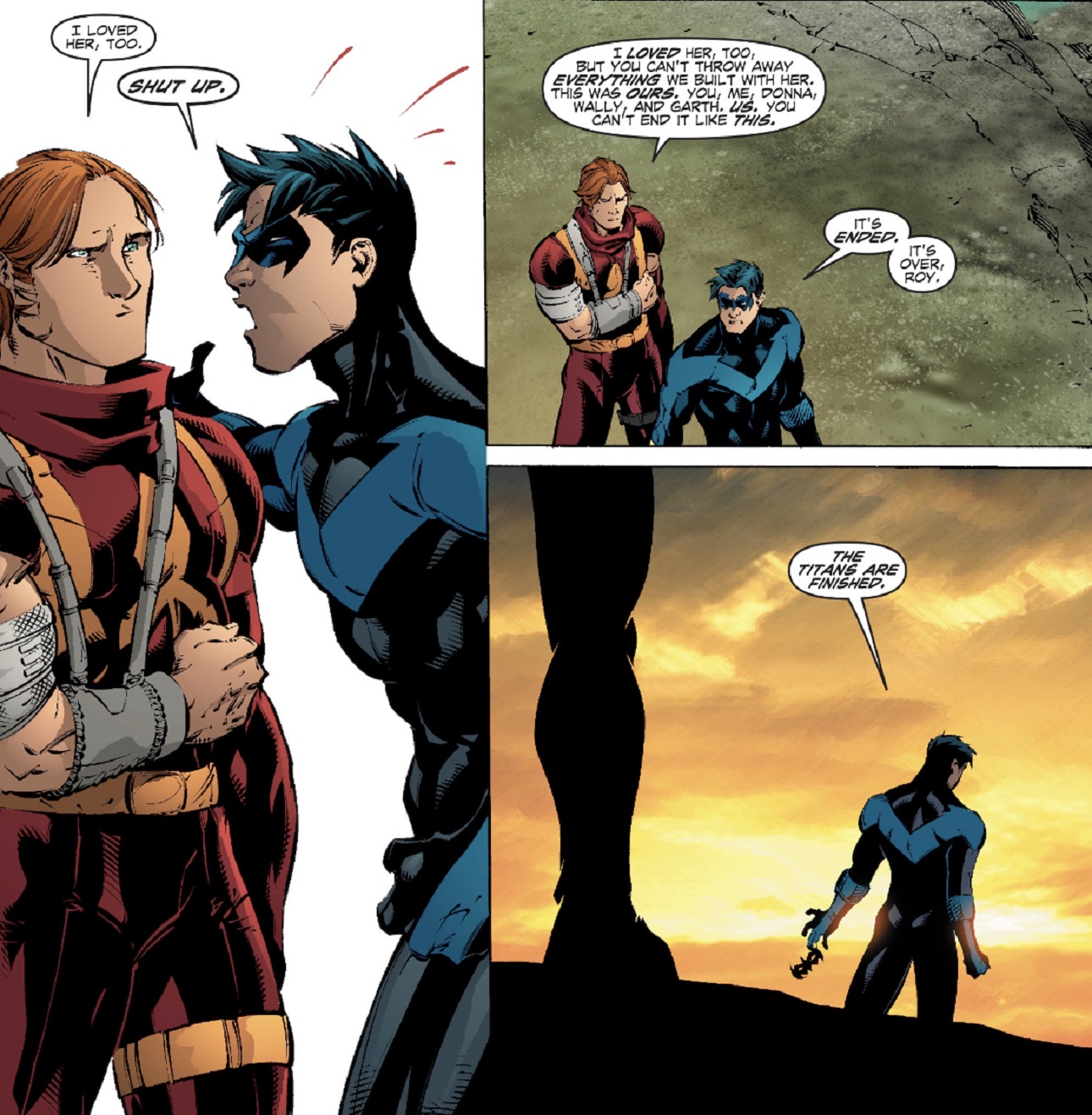 When They Broke Up: Titans/Young Justice: Graduation Day #3

Why They Broke Up: Donna Troy, a founding member of the original team, was killed by a malfunctioning Superman robot. The loss of Donna was so devastating to Dick that he immediately proclaimed the Titans were finished.

Who Dropped the Ball: Nightwing should have rallied the troops and helped the team grieve for Donna together. 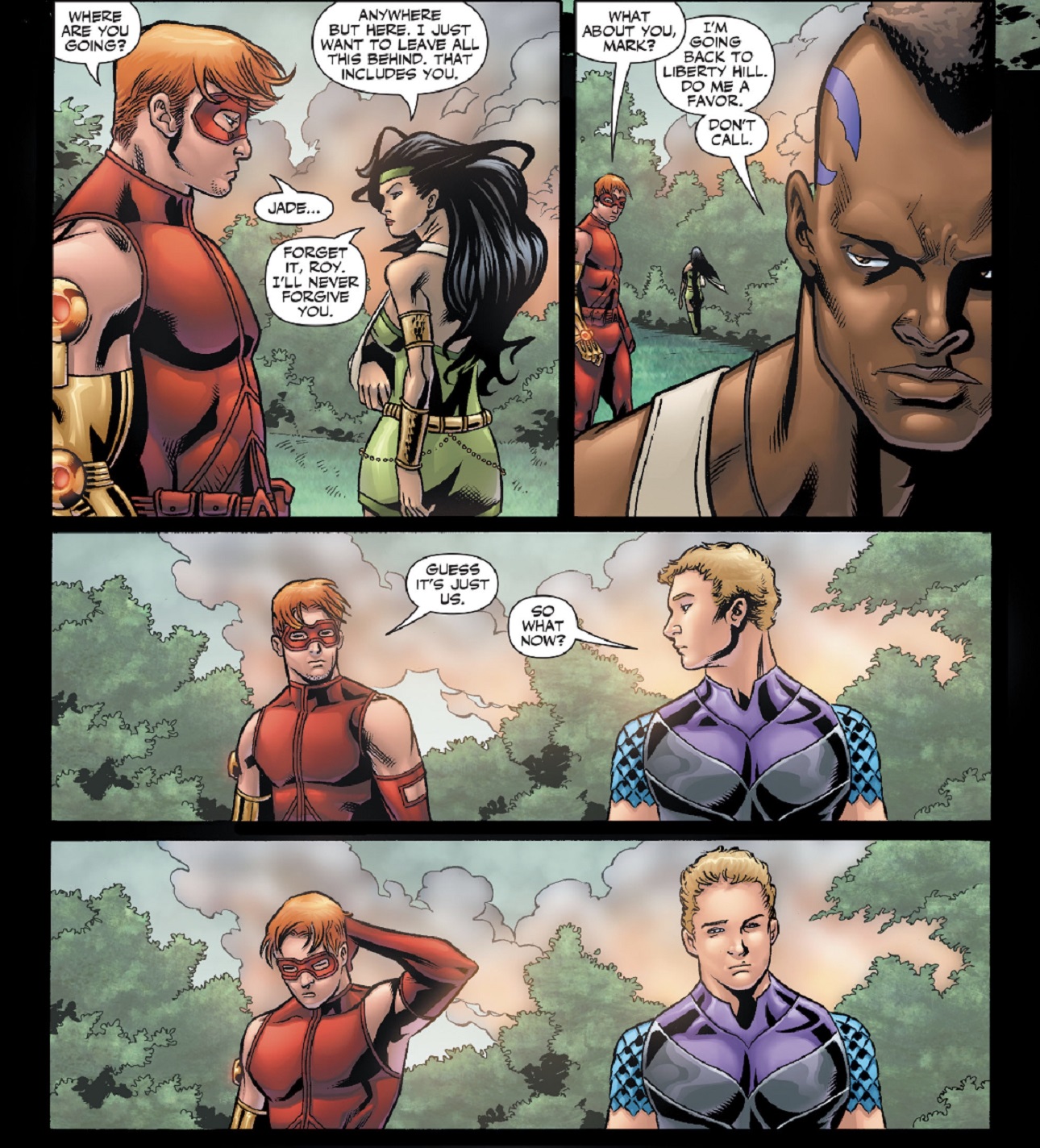 Why They Broke Up: The San Francisco Teen Titans had their ups and downs, but they were actually doing pretty good. The adult Titans were having issues keeping their ranks together though, but Roy Harper and Jericho agreed to soldier on. Nobody counted on the timeline shifting and the world changing.

Who Dropped the Ball: This one is nobody’s fault, except maybe the Flash. The events of Flashpoint caused reality to be altered, creating a history where the teams weren’t together. 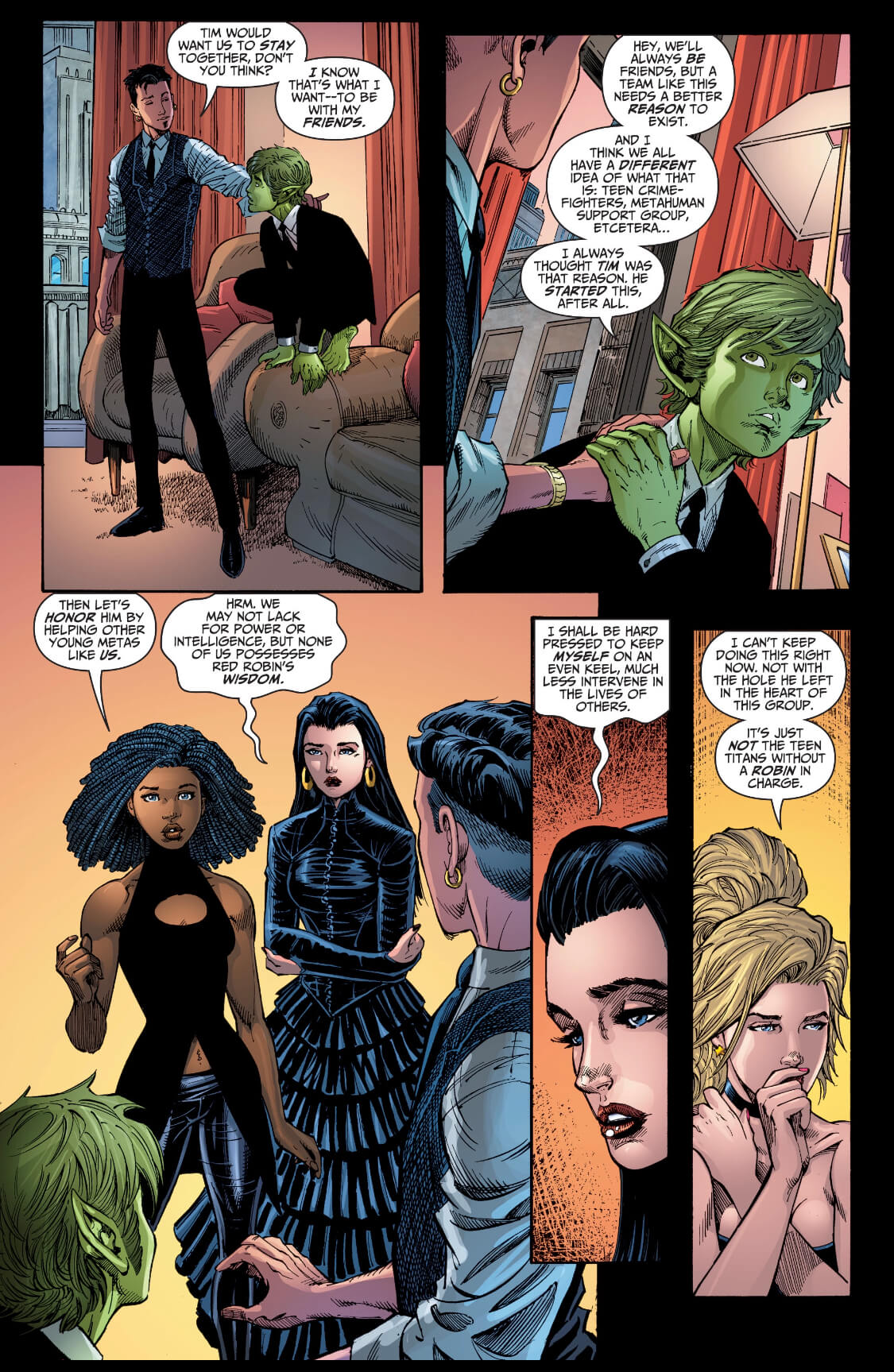 Why They Broke Up: After Tim Drake was presumed dead, his Teen Titans didn’t see any sense in going on without him. The group had their own private memorial for Tim, and decided to go their separate ways afterwards.

Who Dropped the Ball: This team kind of gave up on each other, so it seems the blame belongs to everyone equally. 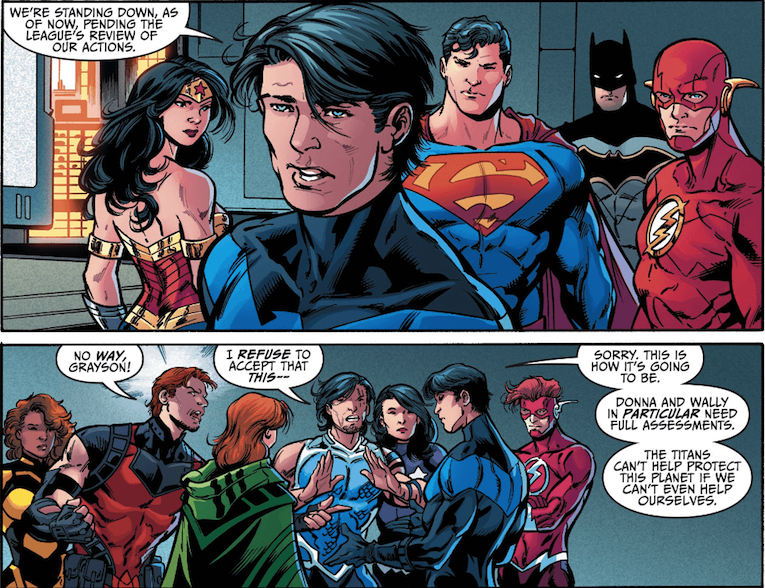 Why They Broke Up: The reunited adult Titans had a few rough adventures, and some major catastrophes were only narrowly averted. The Justice League ordered the team to disband pending a full investigation. After some pushback from the Titans, Nightwing finally agreed to shut their operation down.

Who Dropped the Ball: Nightwing totally gave in to Batman’s pressure. He should’ve remembered that they weren’t kid sidekicks anymore. It’s not like the League hasn’t had their screw-ups! 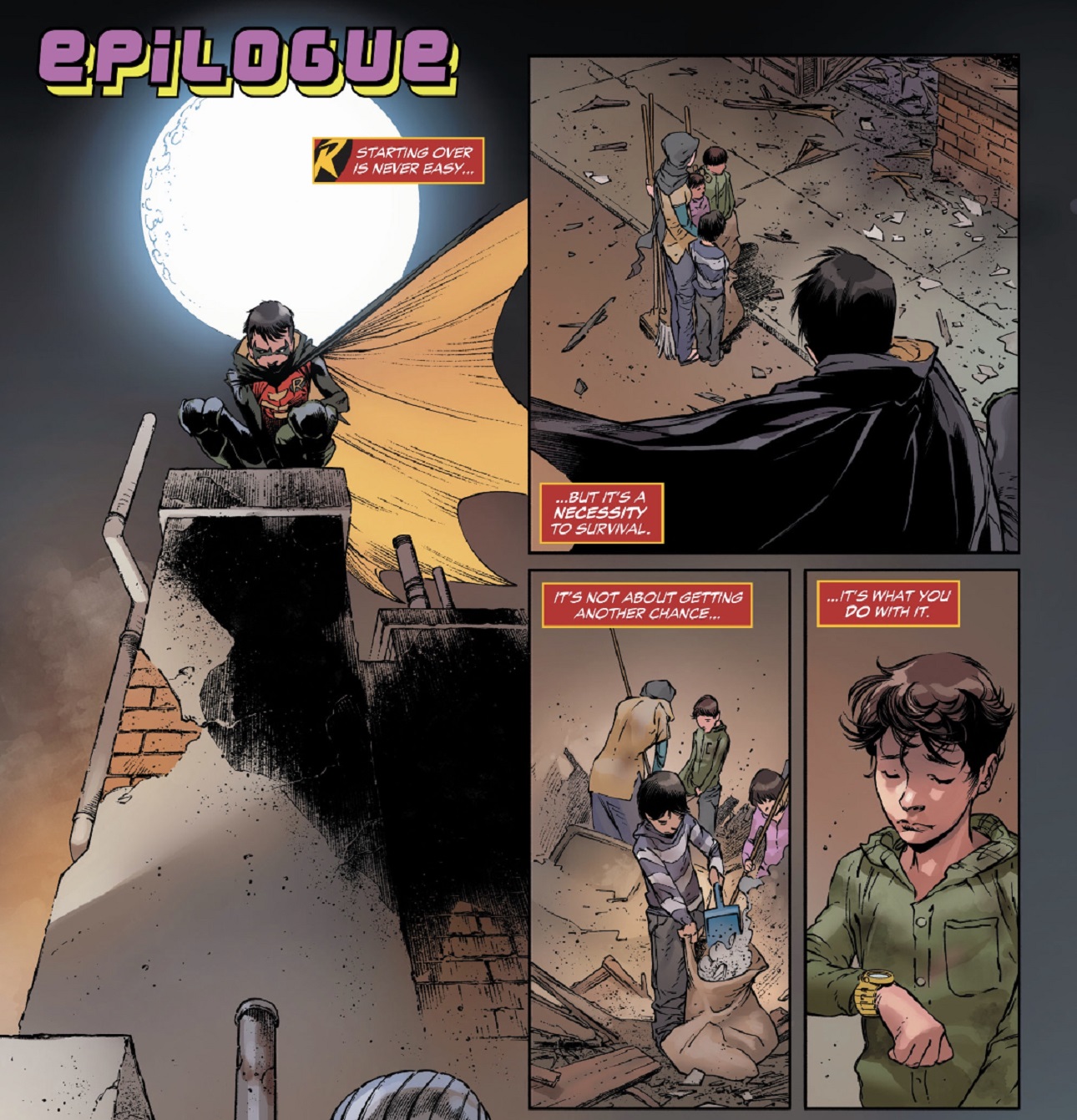 When They Broke Up: During the events of No Justice and 2018’s Teen Titans Special #1

Why They Broke Up: During the No Justice event, Damian Wayne’s teammates were pulled in different directions and wound up on other teams, or embarking on new missions. Robin didn’t see the point in trying to bring them back together and decided to recruit new members instead.

Who Dropped the Ball: It would be easy to blame Damian’s poor leadership skills, but the events of No Justice weren’t exactly in his control. I suppose we should just blame this one on life.

Damian is currently leading a team whose adventures are being chronicled in Teen Titans (2016). Chances are history will repeat itself, so Robin better work on his mediation skills fast. And, just to be on the safe side, stay far away from Roy Harper!

Which Titans leader was the worst? Let us know in our Community!