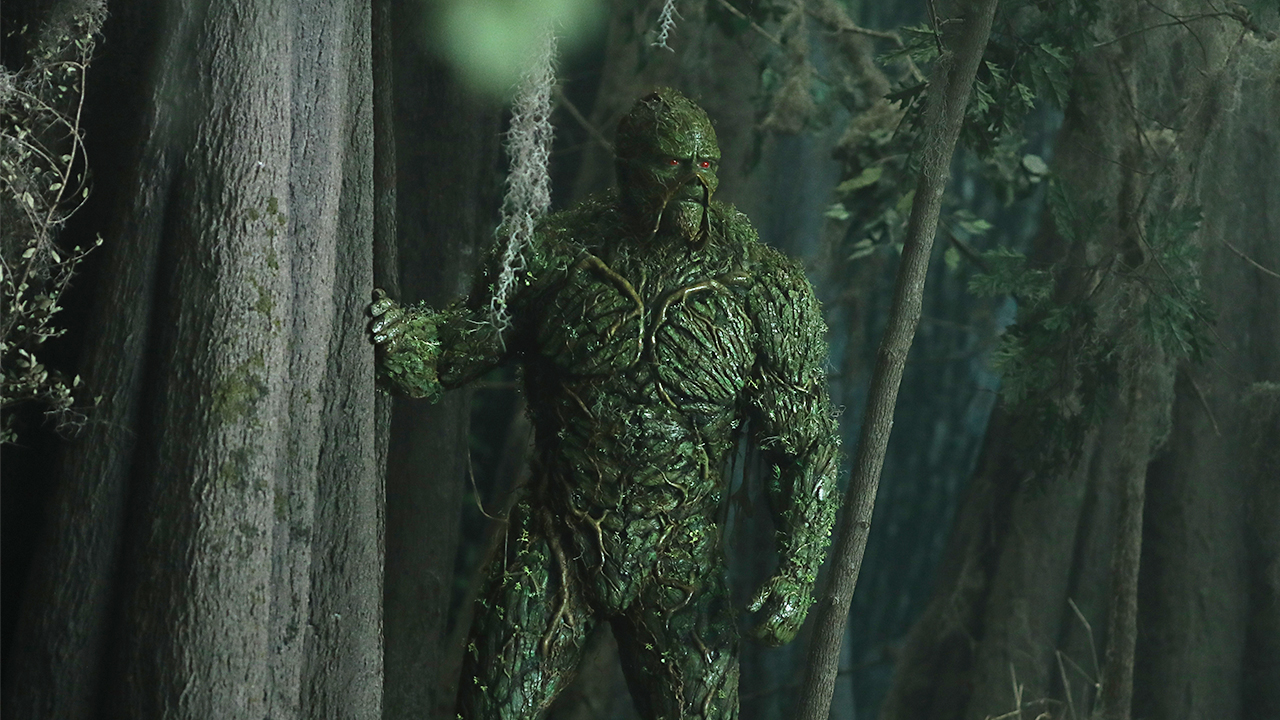 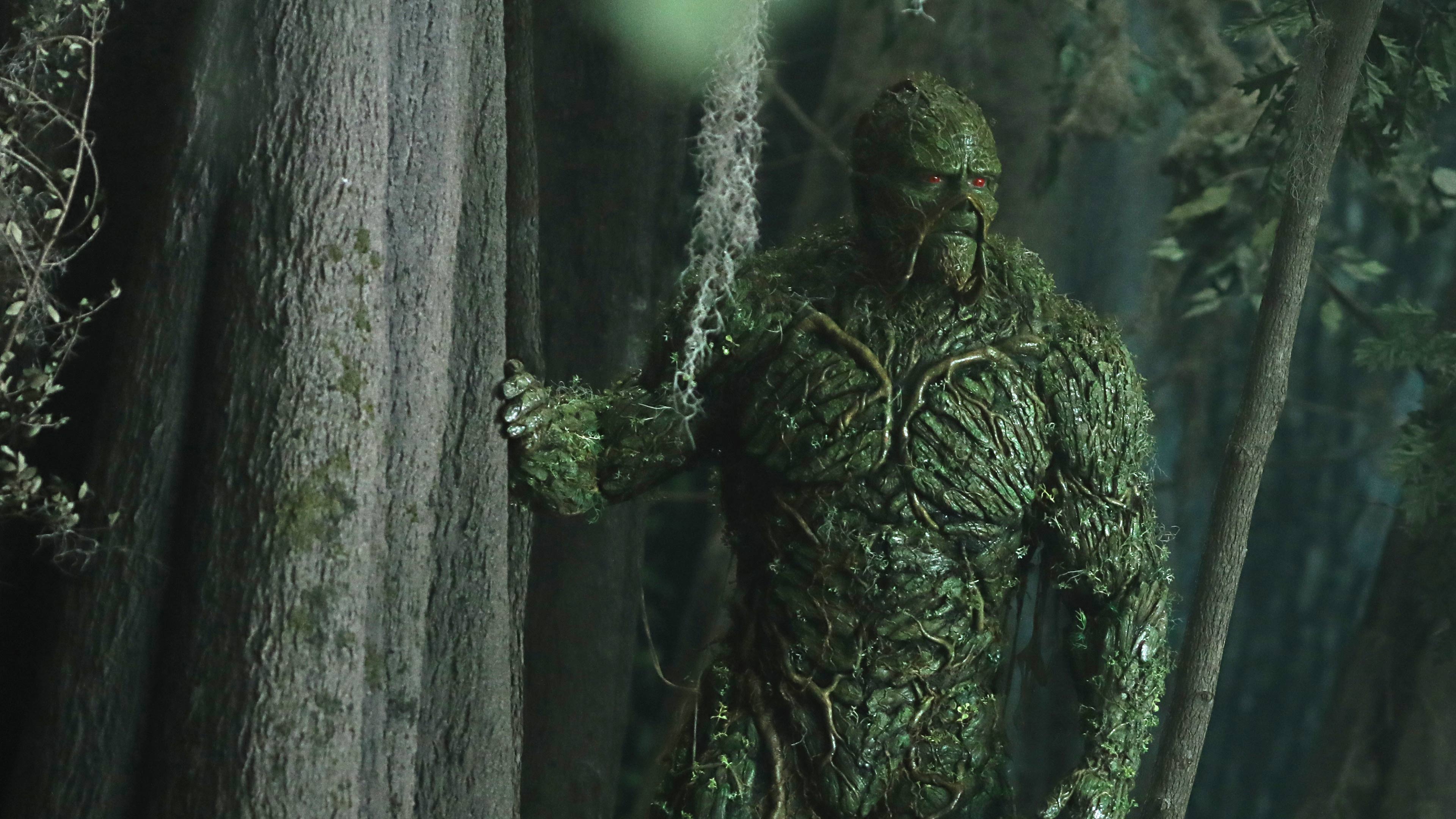 Now that the final episode of DC Universe’s ‘Swamp Thing’ has been released, it’s the perfect time to look back on our terrifying journey through the bayous of Marais. This wasn’t your usual superhero show, because Swamp Thing is no ordinary superhero. With body horror, chilling apparitions, soap-opera intrigue, and constant thrills, the show sometimes felt as much a horror movie as it did a superhero series. Here are some of our favorite moments from ‘Swamp Thing’... 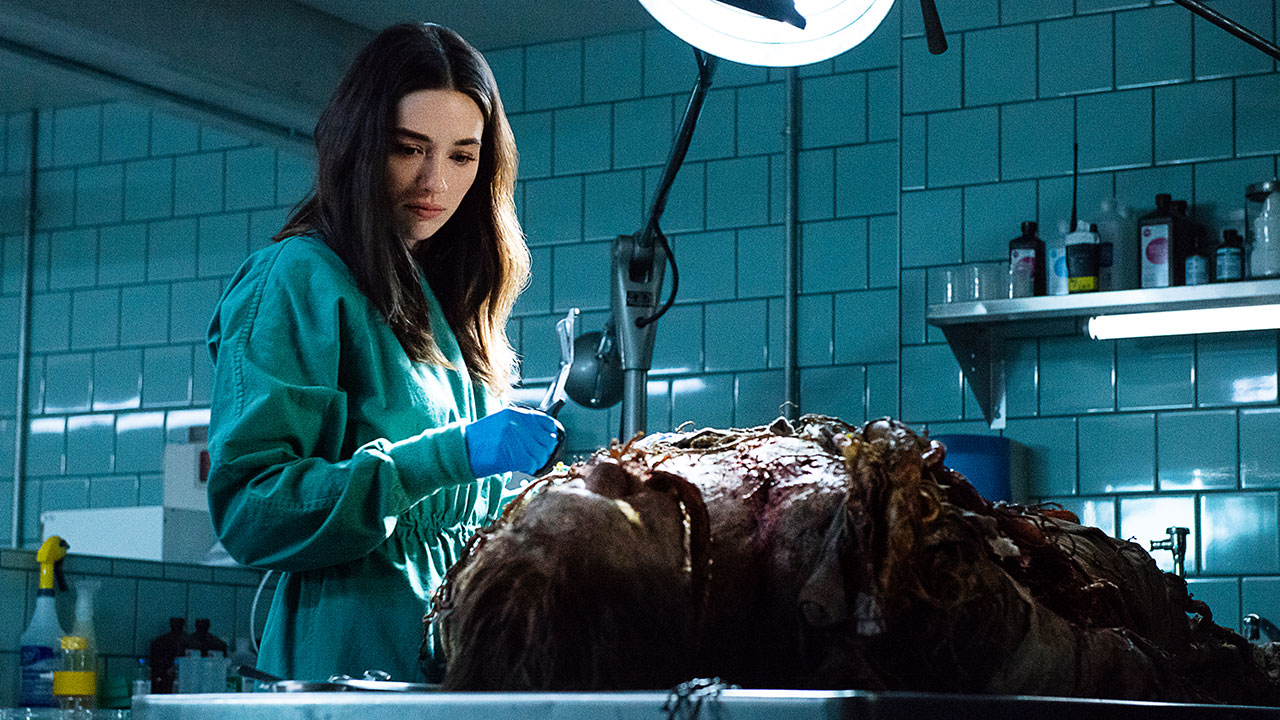 The Moment: As the old saying goes, nothing brings a guy and a girl together like running in fear from a reanimated corpse. After finding the plant-covered corpse of a man named Eddie Coyle, Alec Holland and Abby Arcane tried to make sense of what caused the man to die. While studying the corpse in the hospital lab, Abby and Alec were given the shock of their lives as the decomposing body began to move. Coyle’s vine-covered corpse rose from the examination table and chased the scientists, with parts of its body falling off along the way. Despite the fact that Coyle’s body was barely holding together, the dangerous spiked vines proved to be a threat as they tried to impale Alec and Abby. Alec used quick thinking, chemicals, and a nearby lighter to stop the corpse by burning it, but that wouldn’t be the last time he and Abby would fear for their lives in the series. Since this horrifying sequence played out in the very first episode, it gave viewers an immediate sense of the kind of terror awaiting them in each subsequent chapter.

The Moment: When Superman saves people, it’s a heroic moment that inspires hope. When Swamp Thing saves people, it’s a dark moment of horror that involves dismemberment. After Susie Coyle witnessed a man named Munson kill an officer, the scared young girl ran through the swamps before she could be silenced. Munson pursued Susie, wanting to tie up all loose ends, but he didn’t count on Swamp Thing’s intervention. Using the power of the Green, Swamp Thing caused the vines to pick up Munson, carry him away from Susie, and then tear him apart. Let this serve as a lesson to anybody who thinks about harming children in Swamp Thing’s bayou!

Episode: “Darkness on the Edge of Town”

The Moment: When a force known as the Darkness returned to Marais, some of the city’s most prominent citizens found themselves living out their deepest fears. The Darkness had originally been contained within a rotted corpse, but after a man named Todd accidentally released it, the force worked its way through Marais and caused psychological and physical havoc for everyone it made contact with. Todd put his hand in a garbage disposal thinking he was covered in snakes, Delroy thought the home intruders from his childhood had returned and began to open fire, Lucilia thought her son had been shot and attacked a town party, and Abby saw the man from her nightmares. Swamp Thing was able to absorb the Darkness and return it to the corpse that had held it, but the horrifying ordeal everyone went through wouldn’t be so easily forgotten. 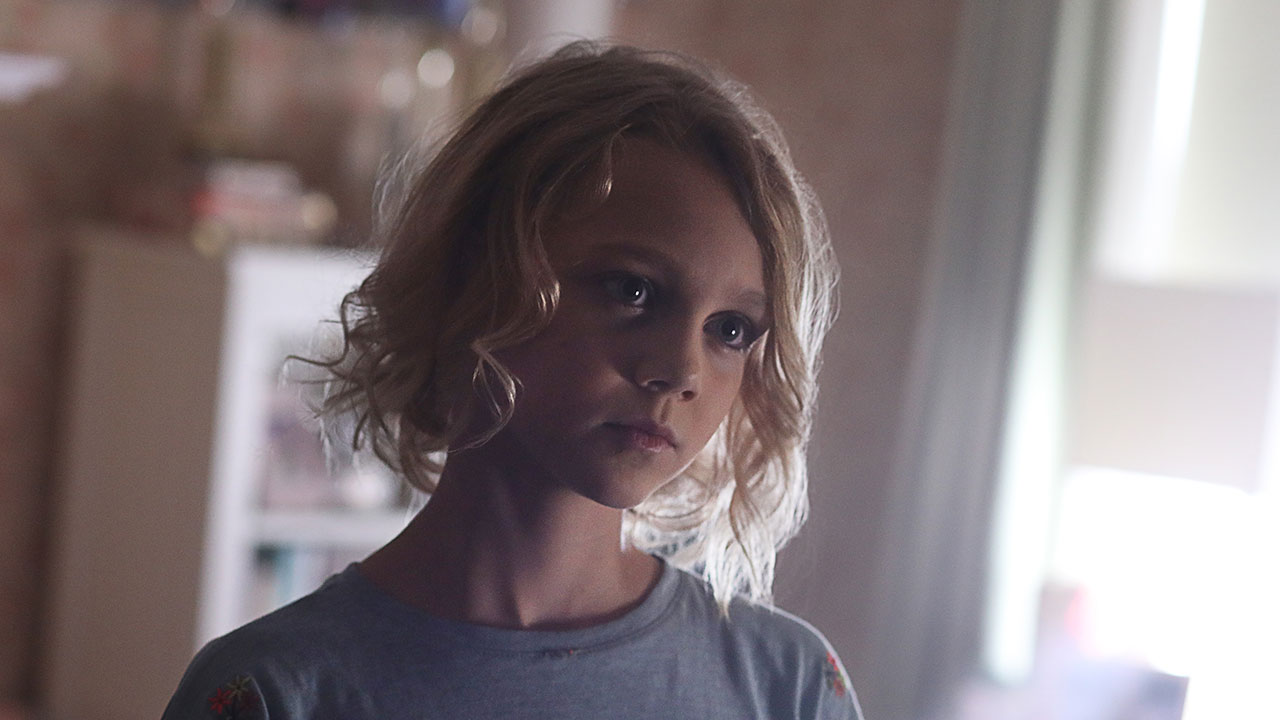 The Moment: All seemed well in Marais after Avery and Maria Sunderland decided to take in the orphaned Susie Coyle, but dark forces soon revealed something more sinister. Avery had hoped that Susie would take his wife’s mind off of their daughter Shawna, who she was still grieving decades later. But the little girl became more than a substitute for their deceased child – she became a vessel for her! The spirit of Shawna took over Susie’s body, leading to a creepy in which the young girl psychologically tortured Abby during a check-up. Shawna/Susie even lured Maria to the swamp, trying to drown her as revenge for letting her die. Luckily, Abby and Swamp Thing were able to save Maria, but the entire Shawna/Susie affair remains one of the series' most chilling chapters. 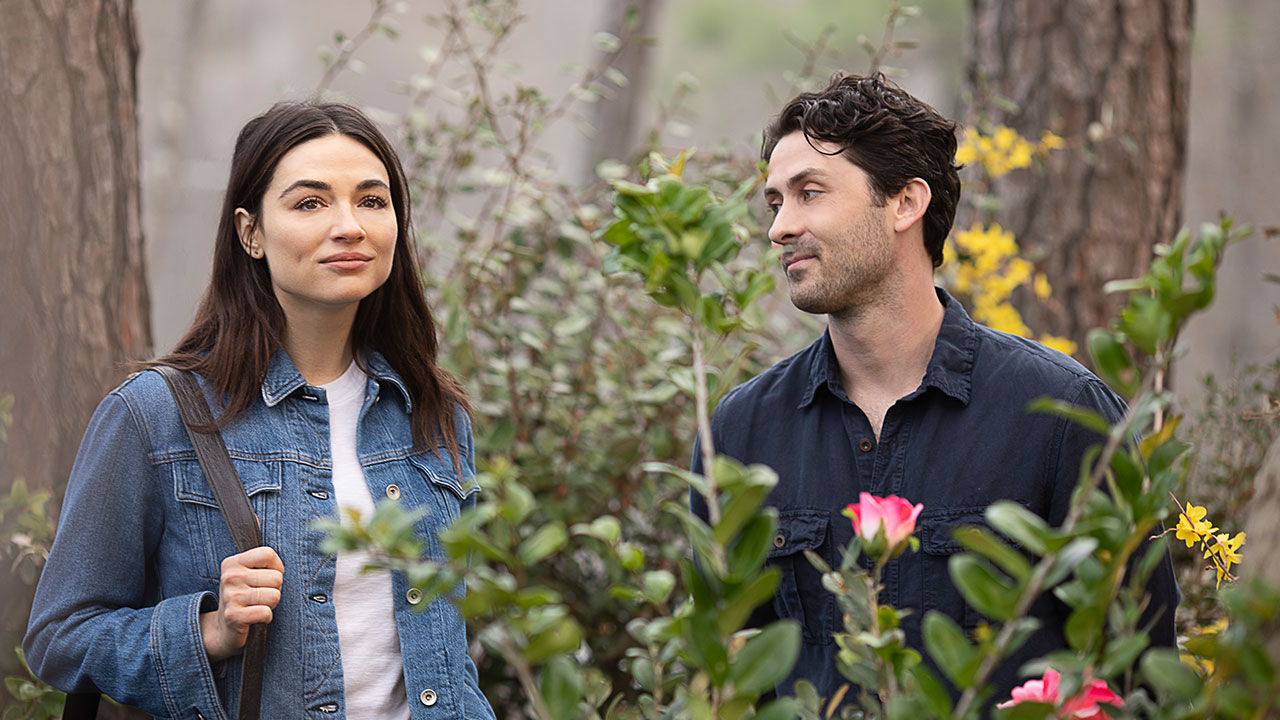 The Moment: After Swamp Thing and Abby inhaled some hallucinogenic spores from Swampy’s body, the world around them seemed to change. Abby was able to see Swamp Thing as the human Alec Holland again -- a vision that affected Swamp Thing as well. It was almost like Swamp Thing had been given a furlough and was able to temporarily spend one day as a human again. The hallucinogenic experience also allowed the couple to walk through the Green, which was a beautiful sight -- before it was overtaken by the decaying forces of the Rot. Abby and Alec fought their way through the terrain together, and even shared a much-anticipated kiss. Alas, like all furloughs, this one had to end and Alec Holland soon found himself looking like Swamp Thing again.

The Moment: One of the great things about ‘Swamp Thing’ was that the supporting cast had interesting subplots, which one could enjoy without realizing Swampy was off doing something else... After learning Avery had corrupted her son Matt, Lucilia took the crooked businessman out in the swamp to execute him. Matt joined his mother for the excursion, but Avery revealed that it was more of a family affair then he had previously expected. Before Matt could pull the trigger, Avery revealed he was his biological father. The ensuing chaos allowed Sunderland to escape, although Matt and Lucila assumed he died in the swamp. The revelations didn’t stop there, as Lucilia took Matt to Sunderland Manor, where it was revealed Maria had helped them plan the whole thing, and that Avery’s wife and his mistress teamed up to take him out. While their plan failed and Avery survived, the incident showed how the town of Marais had its own horror soap opera playing out. 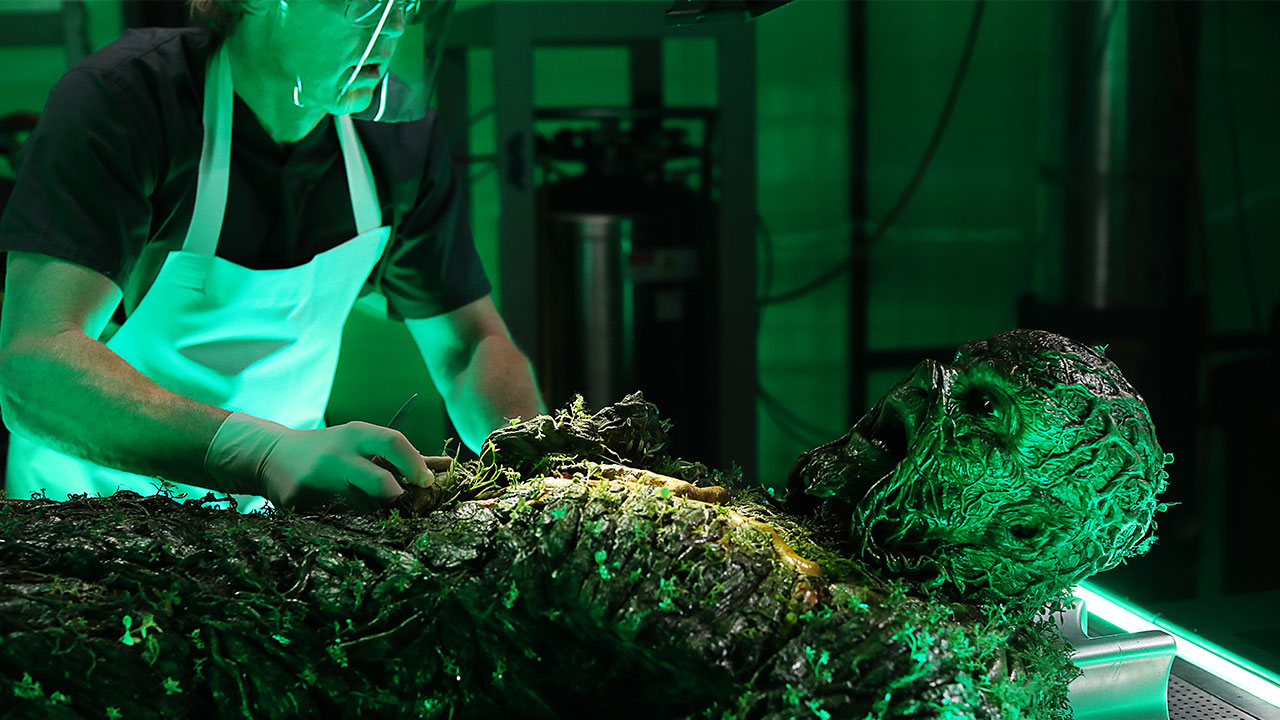 The Moment: After Sunderland’s forces captured Swamp Thing, the creature was turned over to Dr. Woodrue for study. The autopsy played out exactly as it did in the classic Alan Moore comic, with one horrifying exception – Swamp Thing was conscious for the entire procedure! Imagine being fully awake and watching a mad scientist rip your internal organs out of your chest. That’s the level of horror the series reached. After experiencing this body horror, Swamp Thing was given a big dose of psychological horror when Dr. Woodrue revealed to him that he was never Alec Holland at all, but just a plant with the dead man’s memories imprinted upon him. It's hard to imagine what could be worse than being dissected alive, but finding out you were never a human being in the first place may qualify.

The Moment: Ever since Daniel Cassidy first appeared on screen, comic book fans have been waiting for him to go full Blue Devil; and thanks to some coaxing from the Phantom Stranger, viewers weren’t disappointed. When a vision of the future revealed a dark fate awaited Liz and Abby, Daniel donned his old Blue Devil prop mask and a strange change overtook his body. Like everything else in this series, this version of the Blue Devil had a horror twist to them, as Daniel used hellfire and brute force to rip apart Sunderland’s men. The Blue Devil was able to save Abby and Liz. And if any of those armed guards survived, they’re going to need years of therapy to process Daniel’s horrifying counterattack.

The Moment: After almost dying in the swamp, Avery returned and tried to rebuild his relationship with Lucilia Cable. When she rejected his romantic advances (can you blame her?), Avery reacted with anger, as he always does. As Lucilia left the hospital and got into her patrol car, she was surprised to find Avery waiting for her in the back seat. Avery stabbed his former lover, stuffed her into the trunk, and had the vehicle drive into the swamp. Lucilia awoke as the waters filled the trunk, and her screams could be heard from the nearby shore as Avery watched his former lover sink into a watery grave. The two of them had an intriguing romance and rivalry throughout the series, but it was always clear only one of them was going to make it out alive.

The Moment: Just when you thought ‘Swamp Thing’ was over, viewers who kept watching after the credits were treated to a nice surprise. While it looked like Jason Woodrue’s story ended with his mind snapped and the police dragging him away, the post-credits scene revealed he'd underwent a startling transformation. Matt Cable returned to the Sheriff’s office to find his co-workers bloodied all over the floor, and a mossy version of Jason standing over their corpses. That’s right, Woodrue has finally turned into the Floronic Man! The fully realized super-villain was immensely satisfying to those longtime Swamp Thing comic fans who'd been waiting all season for Swampy's arch-enemy to transform.

What was your favorite moment from DC Universe's 'Swamp Thing'? Let us know in our Community!