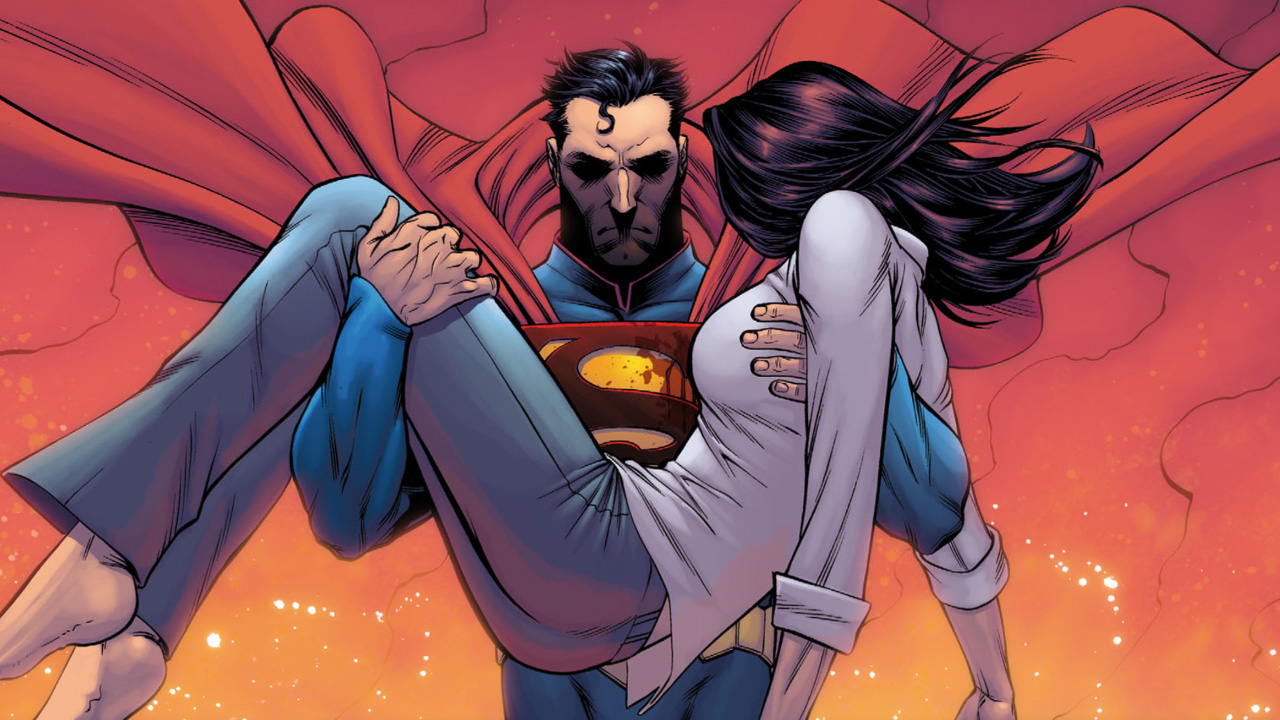 Ten Deaths in the INJUSTICE Comics We're Still Not Over

Well, here we are. Injustice 2 Annual #2 has landed on DC Universe, which now means the entire 250+ chapter Injustice saga, based on and around the hit video game series, is available for you to read right here. For the uninitiated, the Injustice series is about a dark DC Universe where every bad guy is proven right about Superman when he totally snaps and takes over the world, fracturing the superhero community in two as Batman’s resistance battles Superman’s regime. And in between, a lot of people die. Like, a LOT. Basically everyone who isn’t a playable character in the games themselves is unsafe — and sometimes, not even then. To put it plainly: if you have a favorite character who doesn’t have a signature special move combo, odds are they’re not making it outta this one alive. Originally, this was going to be an article about every death scene in the Injustice comics, but we mathed it out and there were 88 of them. Not an exaggeration. We don’t want to keep you all day when you should be reading this stuff for yourself. So instead, here are ten of the deaths which, we’re not gonna lie, still hurt pretty bad. 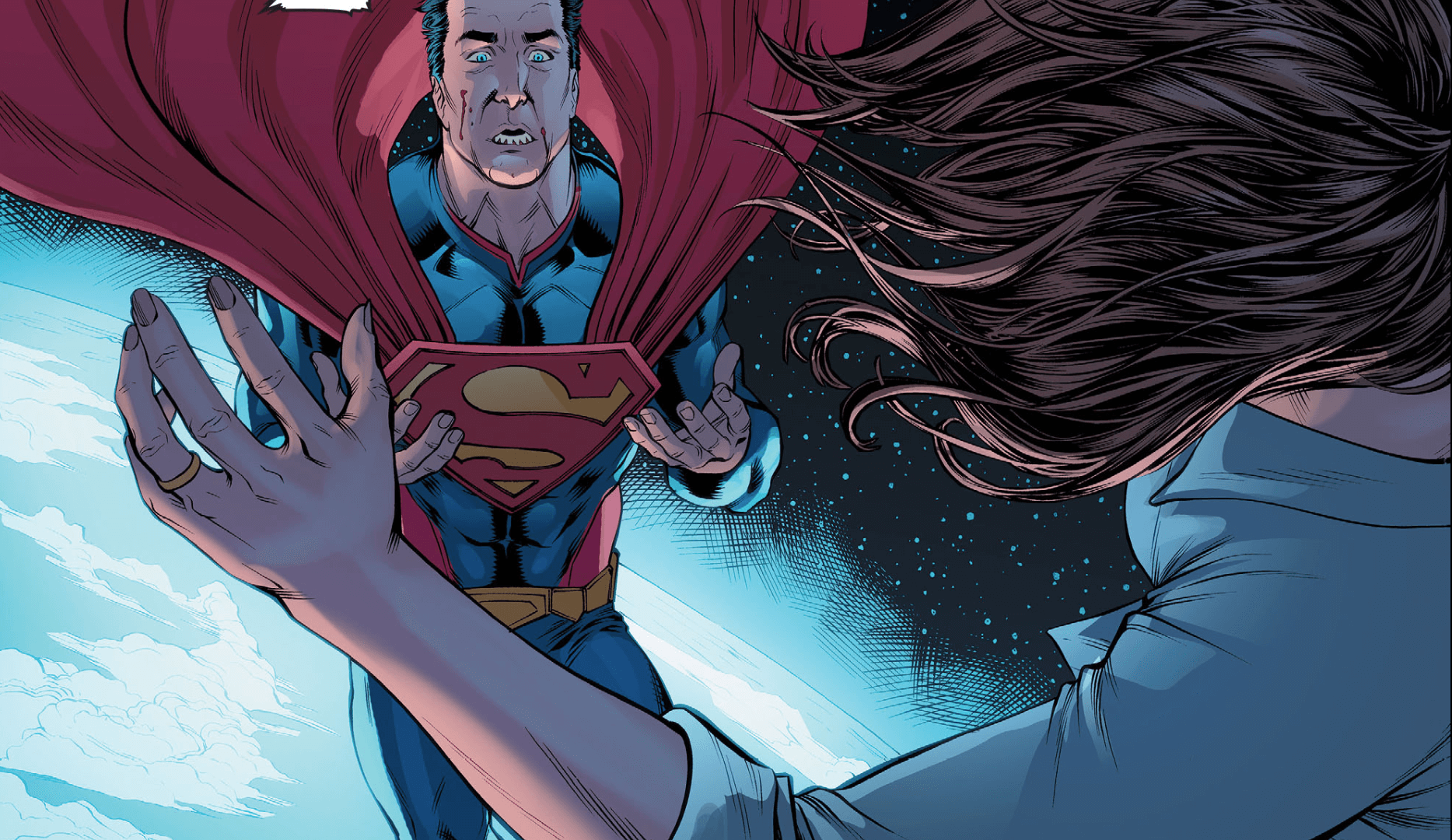 This is one death we can’t COMPLETELY blame series writer and hatchet man Tom Taylor for -- after all, for the entire premise of the video game series to work, Superman, formerly the nicest guy in the world, had to lose it over SOMETHING, and his most vulnerable spot has pretty much always been Lois. But come on, now. Did it have to be this brutal? Did it have to come right after the revelation that Lois was pregnant? Did it have to be Superman himself who was tricked into killing her by the Joker? The answer to all of these rhetorical questions is yes. Anything less dramatic and Superman just might have, we don’t know, retired to live on a virtual farm somewhere. Drastic trauma was required to change Superman drastically. Still, though, oofa-doofa. 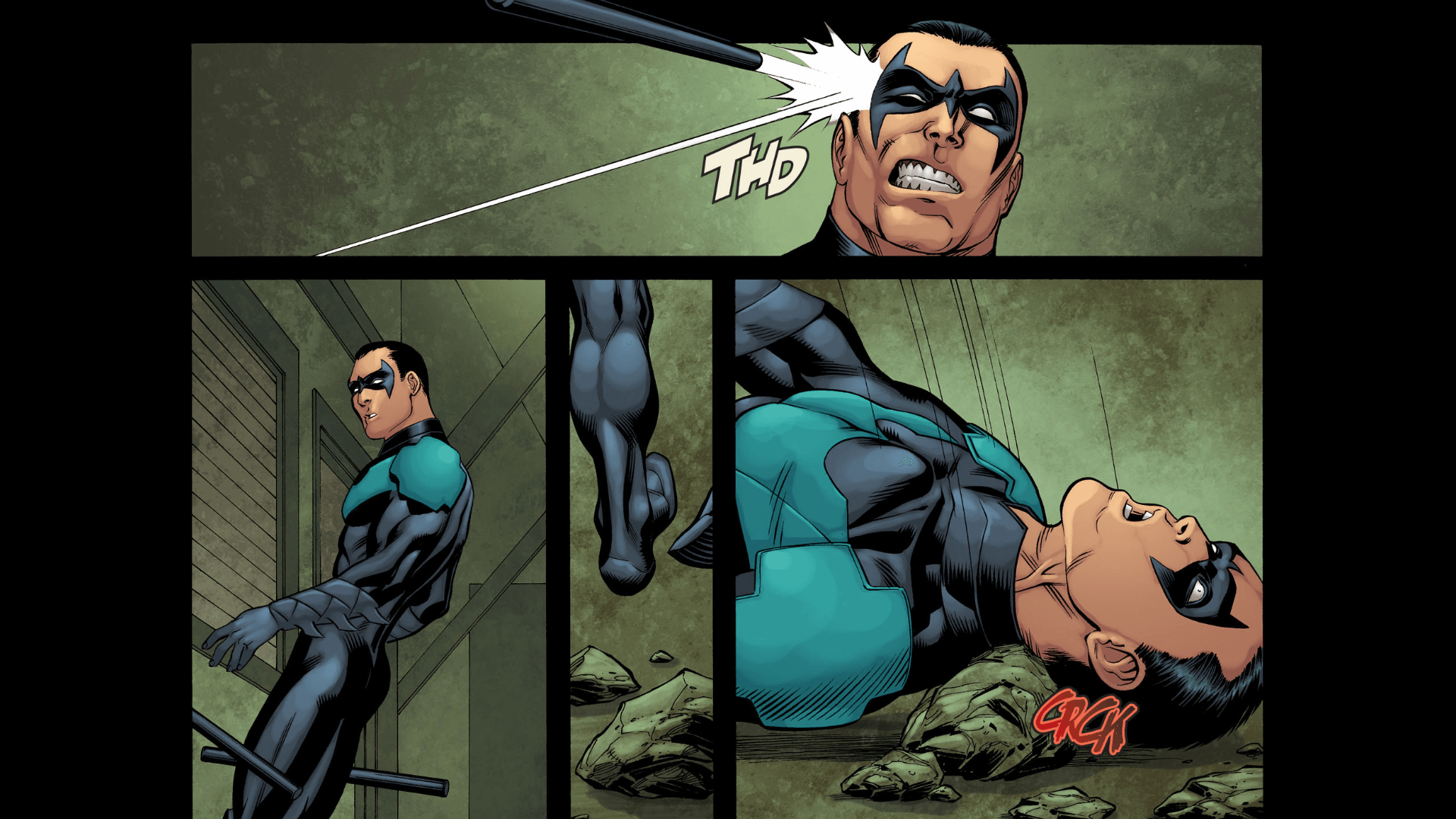 Okay, okay. A lot of people are STILL pretty mad about this, and we get it. The first sidekick of the DC Universe, the leader of the Titans, lover of Batgirl and Starfire alike, good butt-haver, and one of the most beloved and important characters in DC history, is unceremoniously killed when he falls the wrong way and breaks his neck on a rock on the ground. But honestly… it’s pretty funny? Like, just the AUDACITY of it. No huge heroic sacrifice, or grand villainous plot — just a really stupid, sudden death that no one ever could have anticipated. In a weird way (and don’t kill us for this) it was actually refreshing. Death isn’t always pompous and monumental. It comes for everyone, and often without warning. Nightwing’s death represents the all-too-real impermanence and fragility of life that's rarely seen in superhero stories. What we’re saying is this scene kinda rules, if you think about it? This is our final stance on this matter, and we are not backing down from it: it’s a good thing that Nightwing died this way. 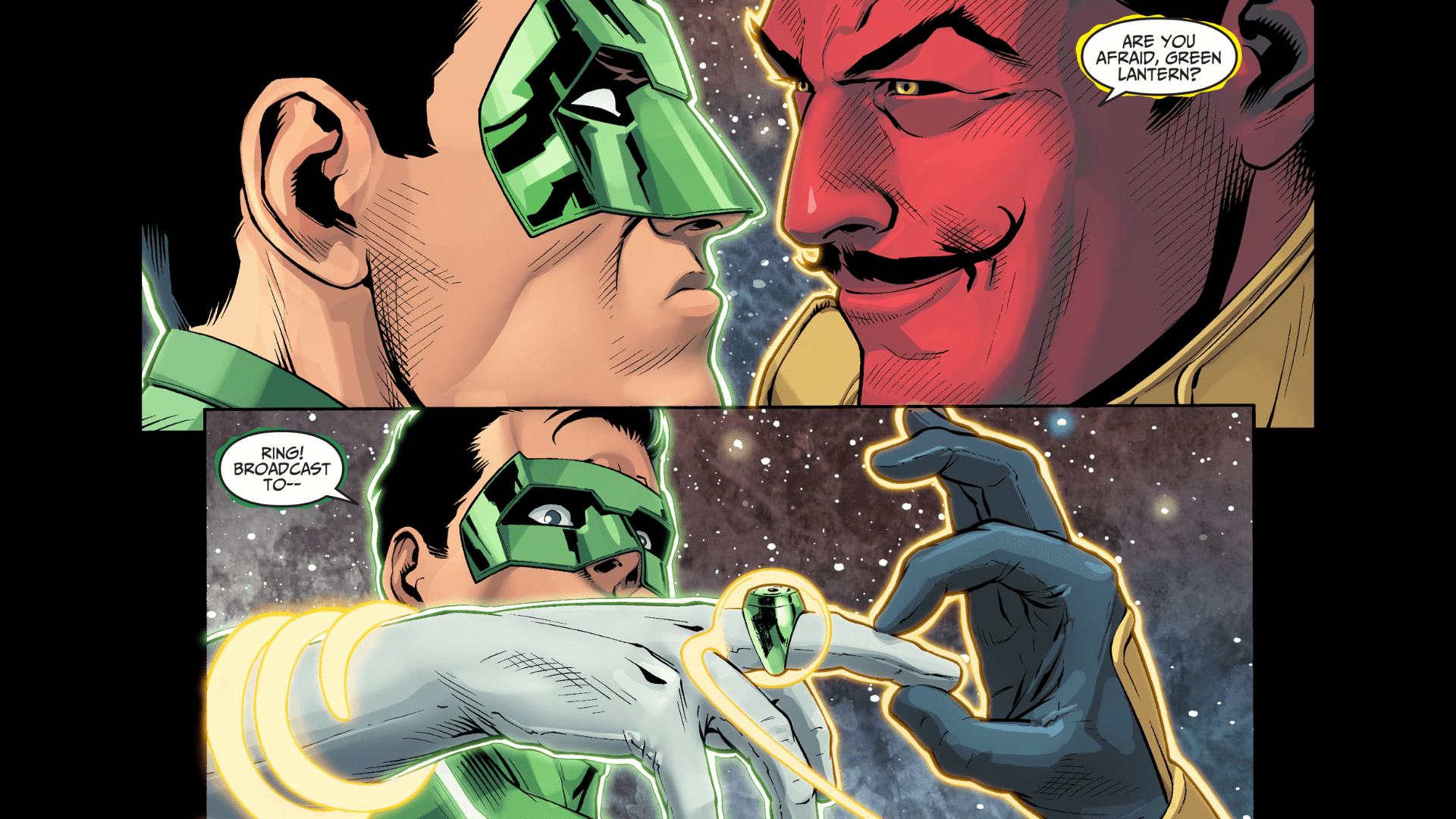 If you were a Green Lantern fan in the ‘90s or the first half of the ‘00s, then Hal Jordan wasn’t your guy. You were a Kyle Rayner fan. And why not? Kyle had the soul of an artist, exercising empathy and creativity to solve his problems in a way few other Green Lanterns ever could. He exerted an enormous amount of power in his incarnations as Ion and, later, the White Lantern. So when Sinestro shows up to pop off Kyle’s index finger in the vacuum of space, instantly killing him… that was kind of a shocker. Injustice: Year Two, after all, was all about the Green Lantern Corps, and to see one of the good guys’ biggest power players taken off the board so early rewrote all the rules on how this was gonna go down. But that’s kind of become Tom Taylor’s move in a lot of his works: do the most unexpected thing first, and then everything which follows is suddenly unexplored territory. 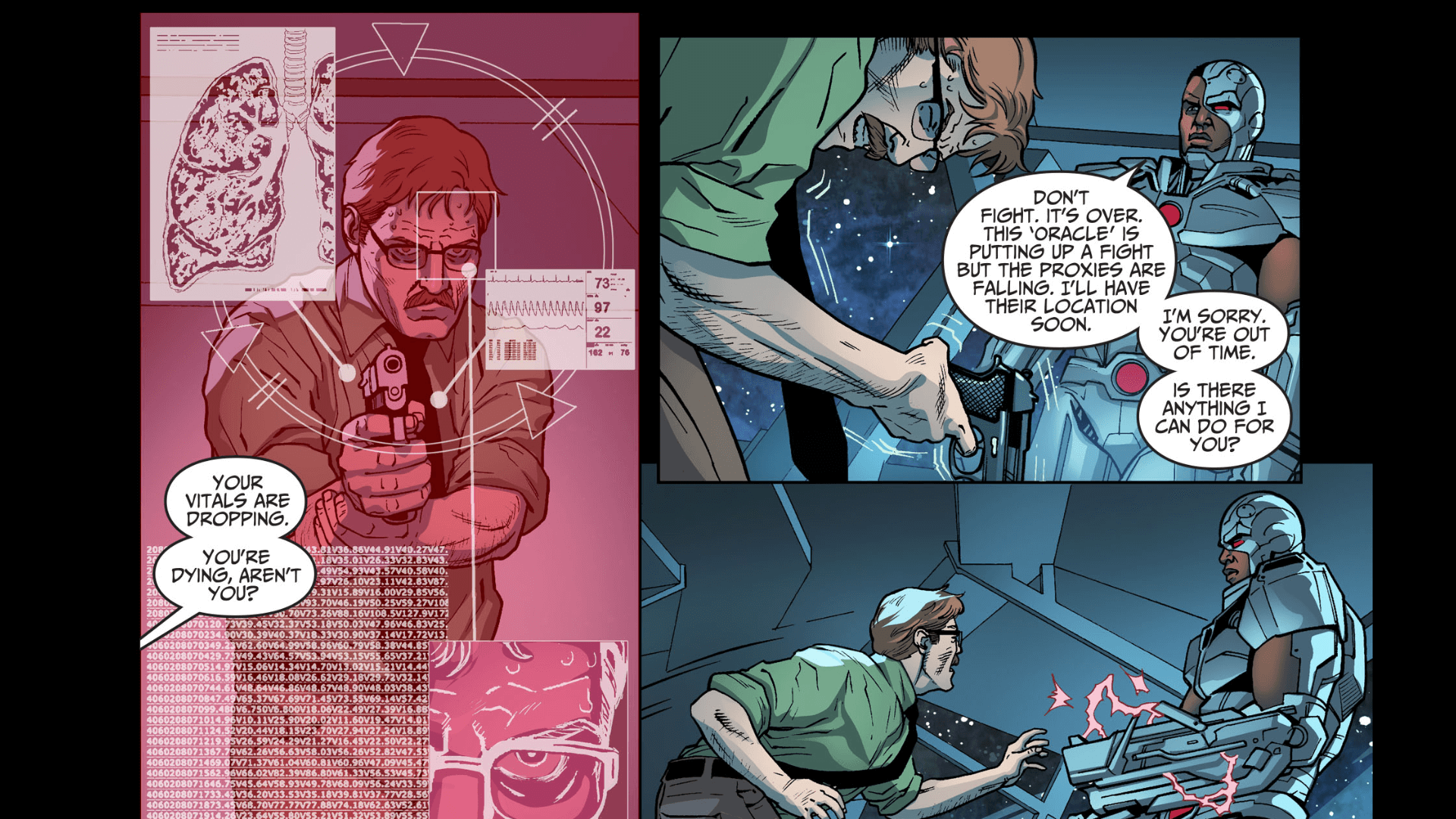 For some people, like Dick and Kyle, death comes at you fast. But for others, it’s painfully, painfully slow. The Jim Gordon of the Injustice universe stands as the greatest example of that, as he runs out the clock against cancer doing everything he can to help save the world from the Regime until his dying breath. Unlike the sudden brutal deaths which often occur in the Injustice comics, Jim Gordon had every opportunity to say goodbye to the people he loved before he went, creating a lingering sense of mortality which stung in a completely different way. Well, Babs always was trying to get her dad to quit smoking, and in a universe where the safety rails are off that stuff is bound to catch up with you. Take it from a Vic Sage fan: smoking kills. 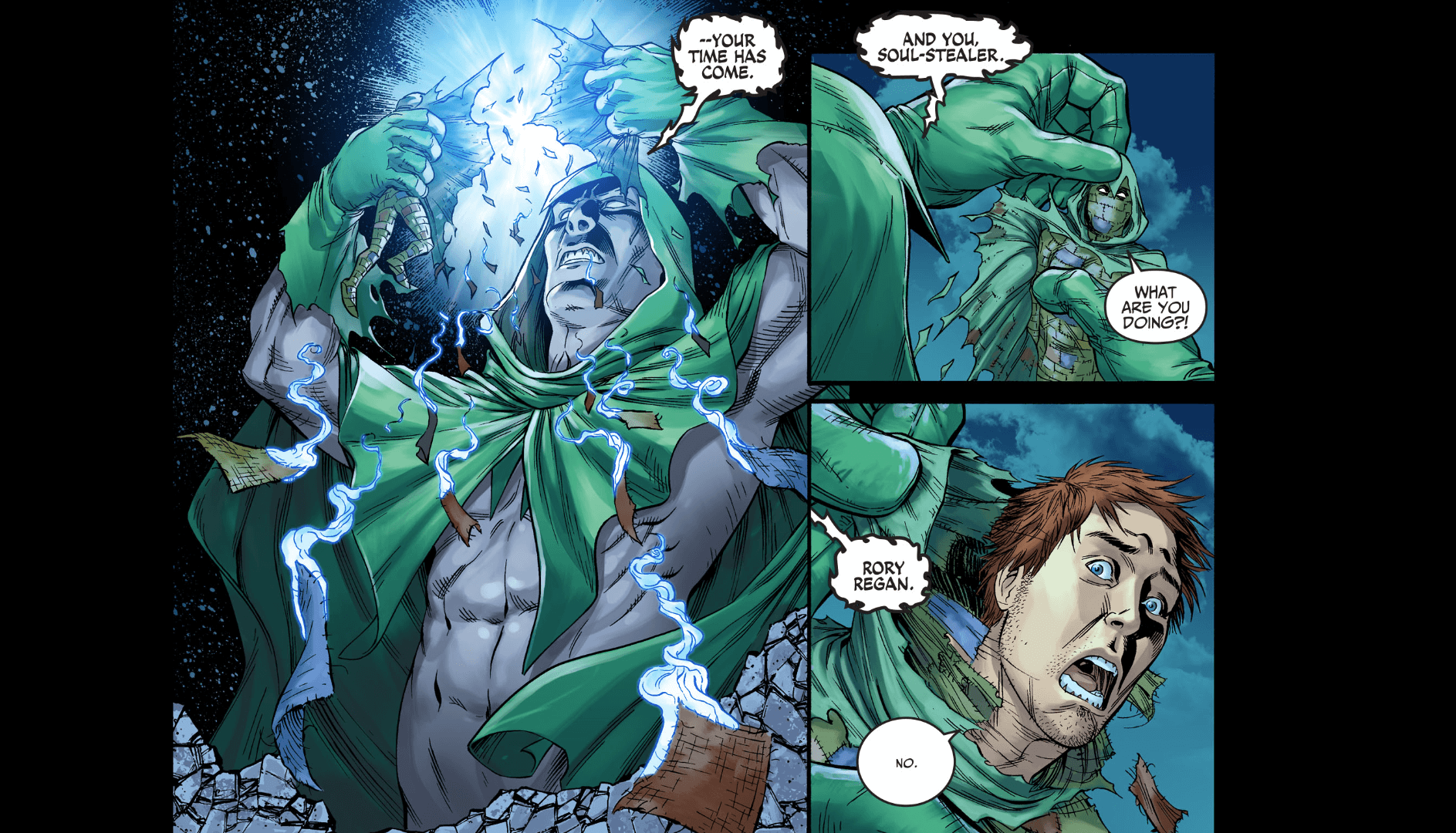 What hurts about Ragman’s death isn’t that we formed a tight emotional attachment to him, or that his death scene was particularly evocative. It’s that it was SO CLOSE TO FINALLY WORKING. After years of fighting Superman’s iron grip on the world in vain, two hypotheses are tested in tandem. First: with Kryptonite out of the equation (tried that, didn’t work, next), the best way to take down a Kryptonian is with magic. Second: to trap a true bastard, what you really need is a bigger bastard. Enter the magic world’s least favorite Liverpudlian scumbag, John Bloody Constantine. With a horse suddenly in the race for the future of humanity after learning he has a daughter, John puts together a truly devious plan to take Superman out of commission once and for all — one which ultimately hinges upon the Suit of Souls, as worn by one Rory Regan in his persona of Ragman. To see the whole thing play out… it’s fiendish. It’s exploitative. It’s brilliant, is what it is. It even culminates in one of the series’ best monologues, with John himself exposing Superman to the monster that he’s become. But… when this happens, we’re still years before the video game actually takes place, so of course he has to fail. And like every other part of Constantine’s life, it’s a far better person who ends up paying for John’s miscalculations. Nothing hurts like being so close to victory, only for it to be snatched away. 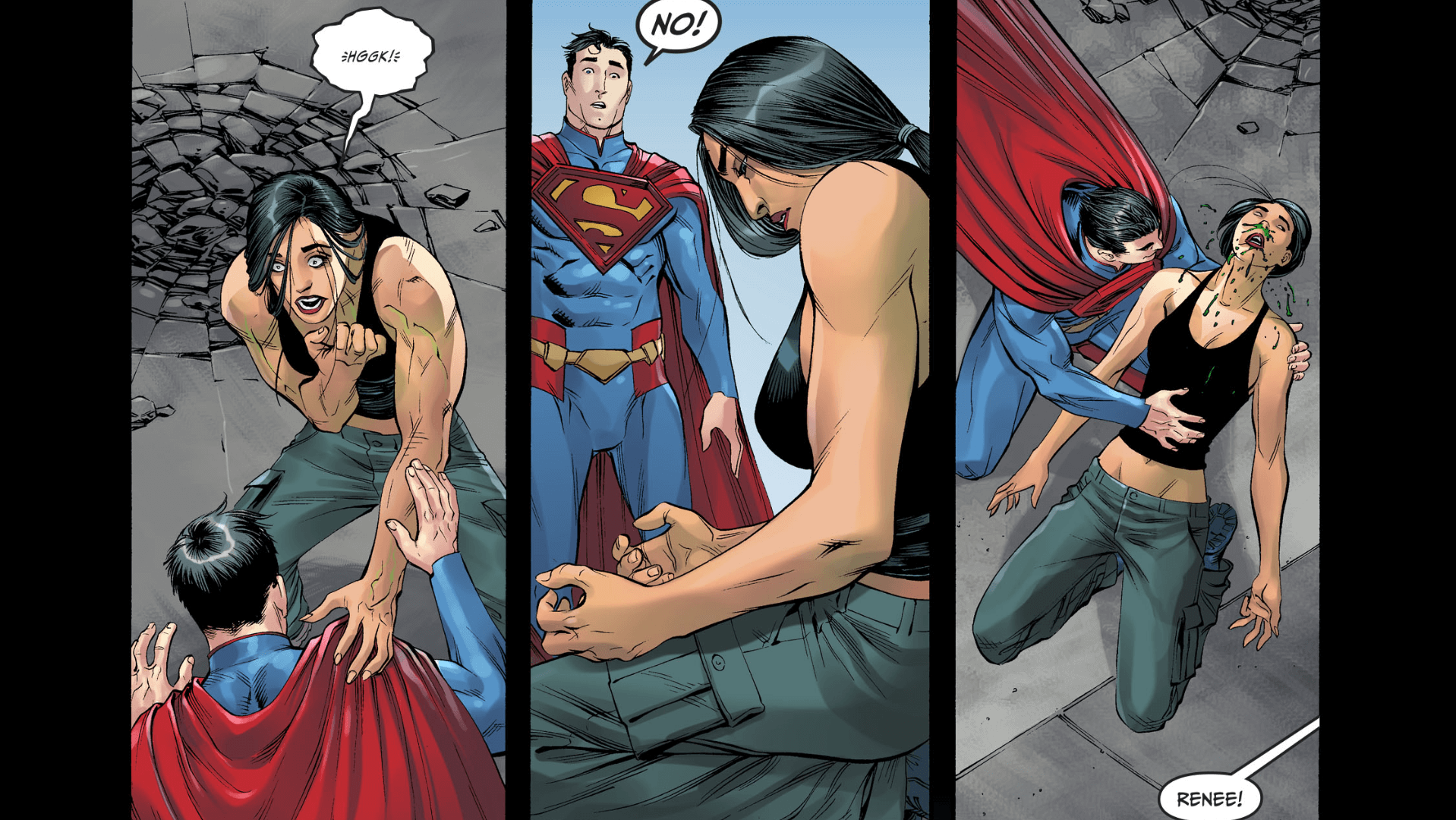 Let’s get one thing straight: up from the jump, GCPD detective Renee Montoya has always been a stone-cold badass. In the Injustice universe, this fact is just as immutable as it is everywhere else. But here’s the thing: a lot of the hidden charm of the Injustice series comes from quiet character moments in between the chaos -- unexpected bouts of joy and relief which contrast themselves from the oppressively bleak surroundings of their world. One such ray of light was that of Batwoman and her long-time paramour Renee, who actually finally managed to tie the knot and marry each other on this bleak and sullen world. Which lulled us into a sense of security that maybe, this time, this once, these characters could have a happy ending. WRONG. FOOLS. Did we forget what we were READING? This time, Renee took a whole bottle of Super Power pills, knowing the overdose would inevitably kill her- but not, she hoped, before she could just straight up murder Superman herself with her own two hands. And the thing is she very nearly does. For every evil Superman has committed in the name of order, for every good man and woman who has lost their lives for freedom from his tyranny, Montoya lands another blow on the seemingly invincible Superman. But, wouldn’t you know it, her body gives out from under her the moment before she can deliver the final blow. But hey. When all the meticulous planning falls apart year after year, sometimes you just gotta charge for the goal line. 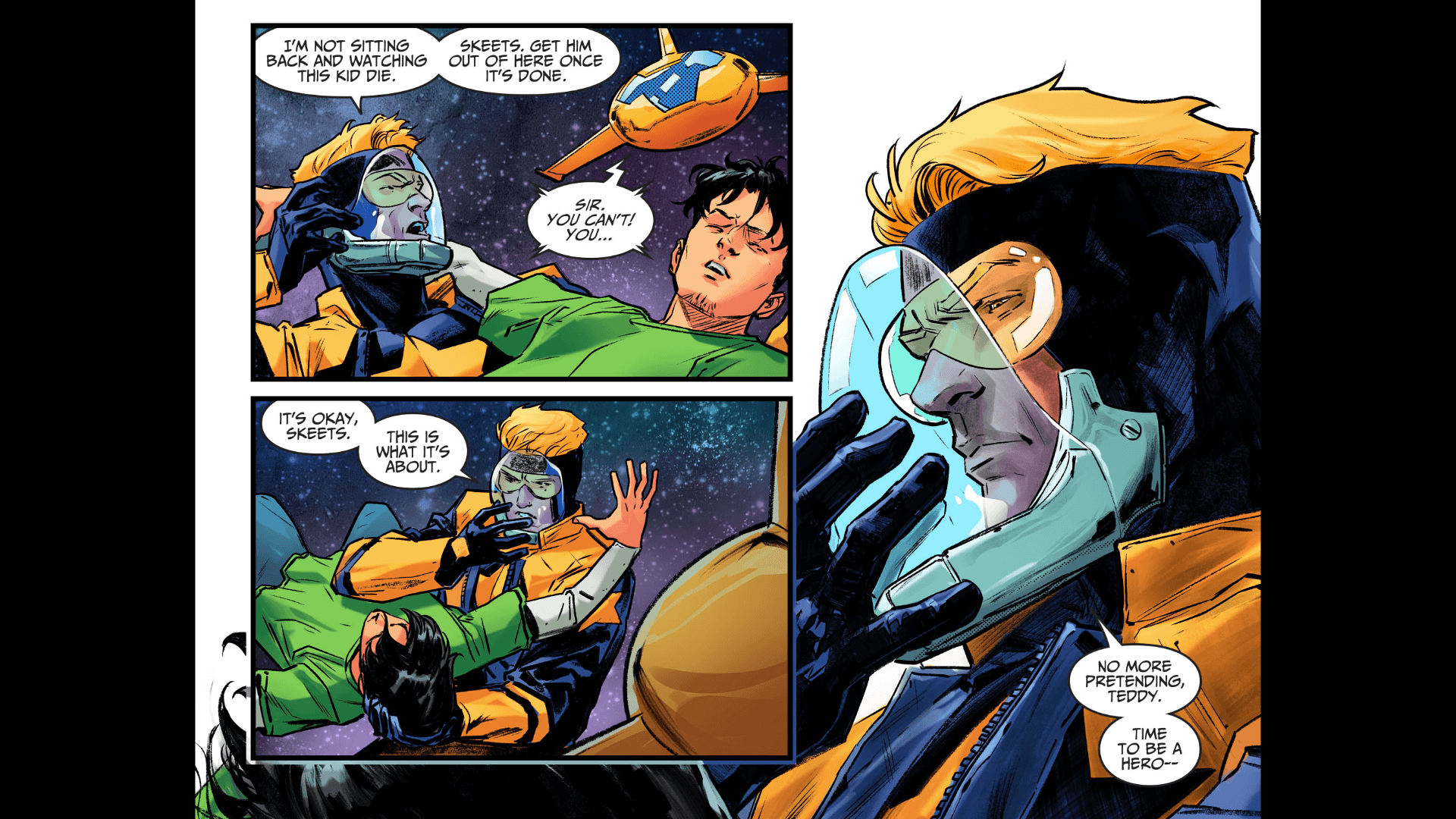 One of those rays of light we were talking about through Injustice 2, the longest chapter of the series set between the events of the two fighting video games, is the bittersweet comedy of Booster Gold as he serves as a mentor to new Blue Beetle Jaime Reyes after the death of his best buddy Ted Kord. But when Starro the Conqueror is drafted into the GD Red Lantern Corps, it means everyone in the universe is pretty much screwed, and in the final battle it’s only Jaime who can take the monster mind controlling starfish down… by detaching from his scarab in the dead of space. And Booster Gold, for the first and last time, commits a truly selfless act to save this poor kid with an unimaginable burden who only wanted to do what was right. And what happens next -- well, Booster’s final moments have to be seen for yourself to really register. It’s worth getting there, we promise. 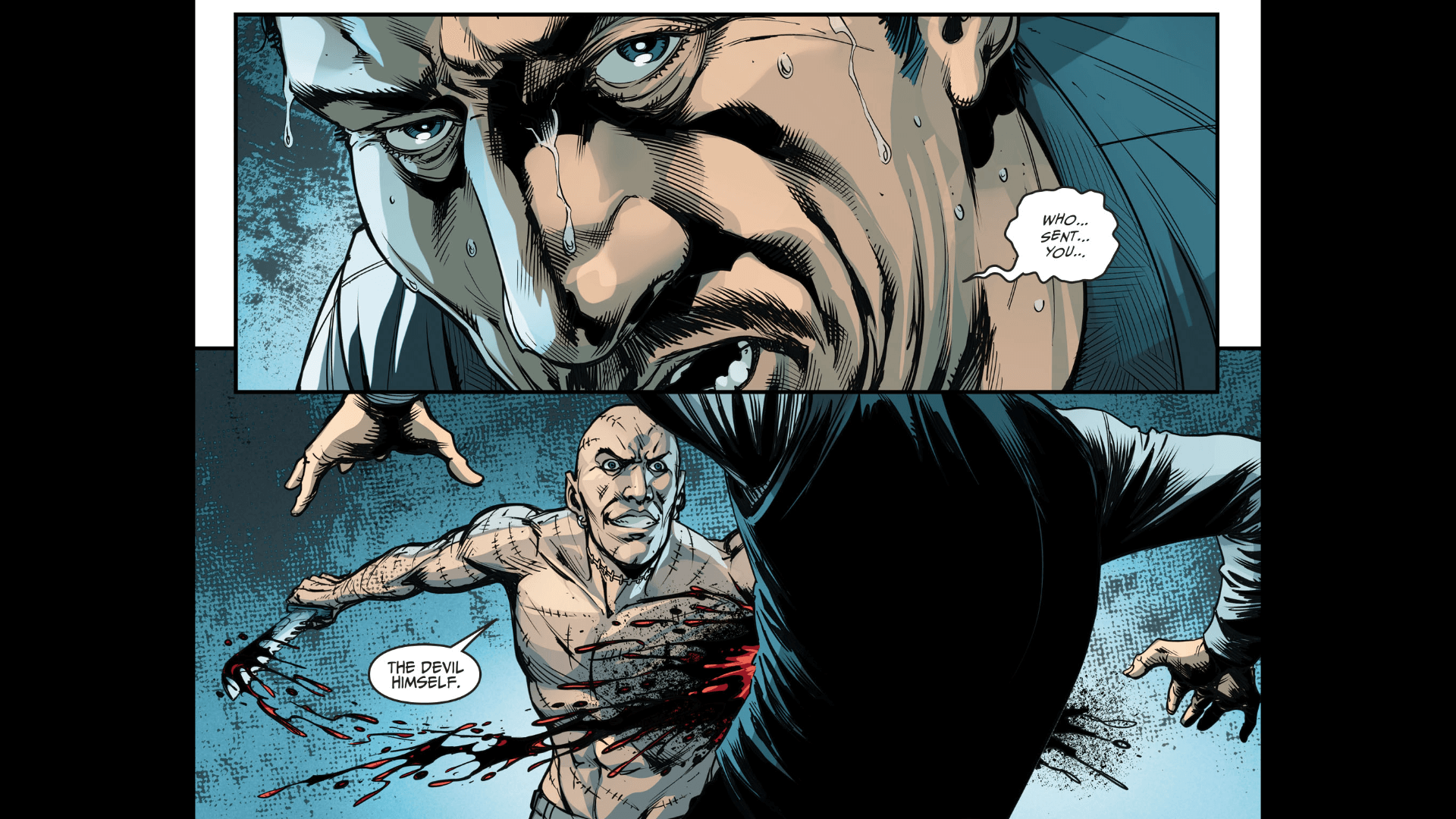 Let’s face it. There are a LOT of dead Batman characters here. Why is that? It’s not like there isn’t a mile-long list of casualties throughout the DC Universe in Injustice, so why do the losses of Batman’s supporting cast hurt the most? Is it because, due to the ubiquity of Batman himself, we’ve spent so much more time with them in the other comics? Or maybe it’s because as the leader of the resistance against Superman, it’s Batman who has to suffer the greatest losses? Whatever the reason, the death of Batman’s closest ally and true father was the moment for many that there was no turning back for this version of Superman, when he enlisted Victor Zsasz of all people to interrogate him. We mean, come on. What did Superman think was going to happen there? And furthermore, what kind of monster kills off ALFRED PENNYWORTH? Who could possibly be so heartless to put that into their comic book series? To be fair, Damian does end up bringing him back later, but can you even IMAGINE? How evil would somebody have to be to kill off Alfred Pennyworth, and just end their run to leave him to that fate? Clearly not even Tom Taylor’s heart is so blackened. It’s a good thing we’ll never have to suffer that! 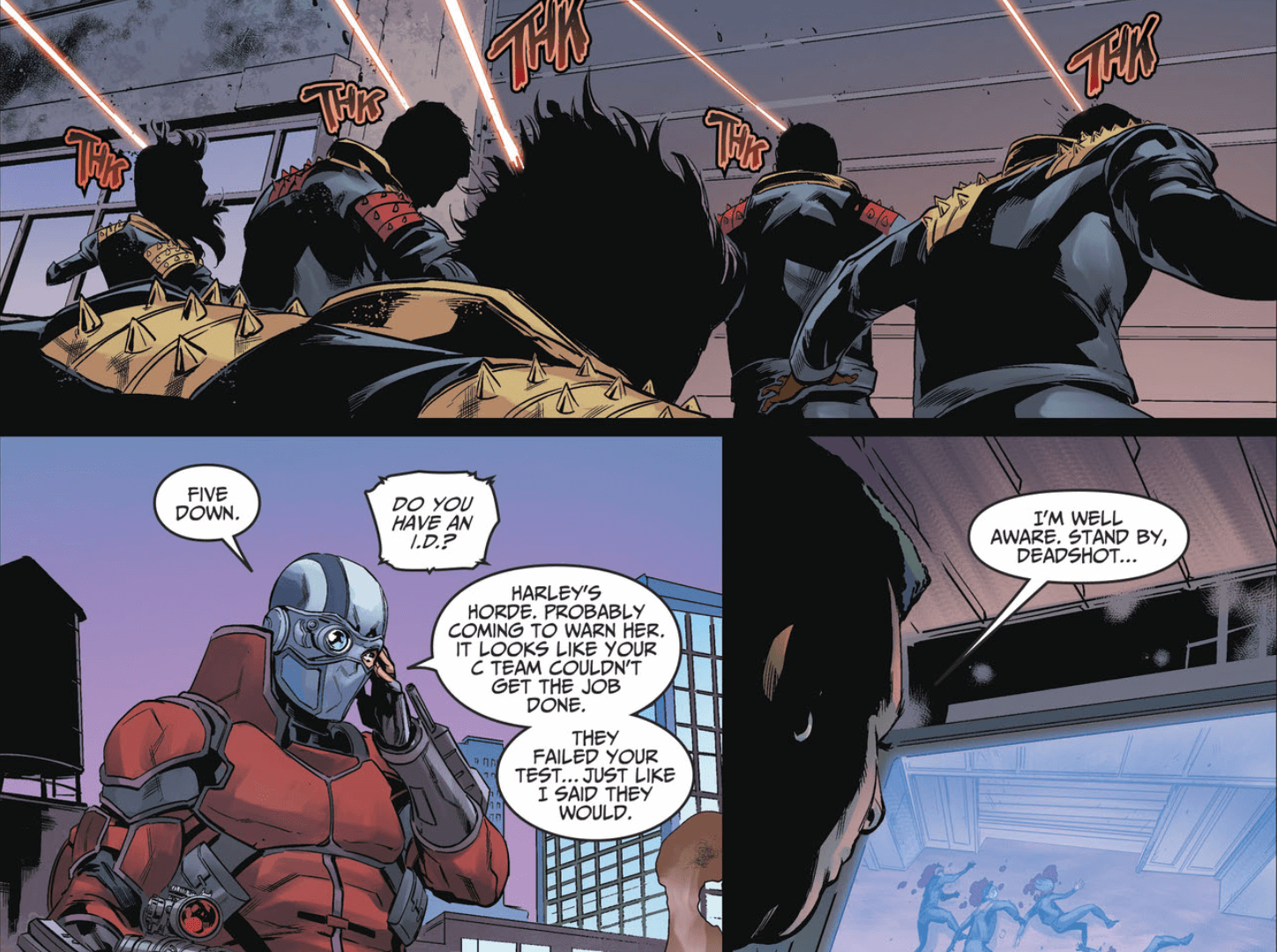 Now this one is just mean. One of the most unashamedly gleeful parts of the entire Injustice saga is the characterization of Harley Quinn, who takes on a life all on her own through the series with a refreshing perspective not seen on either side of the conflict. It could be argued that after Batman and Superman, Harley is the third protagonist of the entire series — especially when Taylor appoints her the point-of-view character for his retelling of the events of the first game, Injustice: Ground Zero. In that series we’re introduced to Harley’s lovable, colorful Harley Horde, a group of Joker goons who defected to join Harley in her cavalcade of chicanery. So, naturally, when Taylor came to finally put a cap on the books with the Injustice 2 Annuals, he just had to get one more dig in by extinguishing this group of characters he had just invented for the previous series. Was this really even necessary? At this point it just seems like Tom Taylor is killing as a reflex. First this, then DCeased, pretty soon Suicide Squad… it’s all so clear now. Tom Taylor must be stopped, or he will kill again. 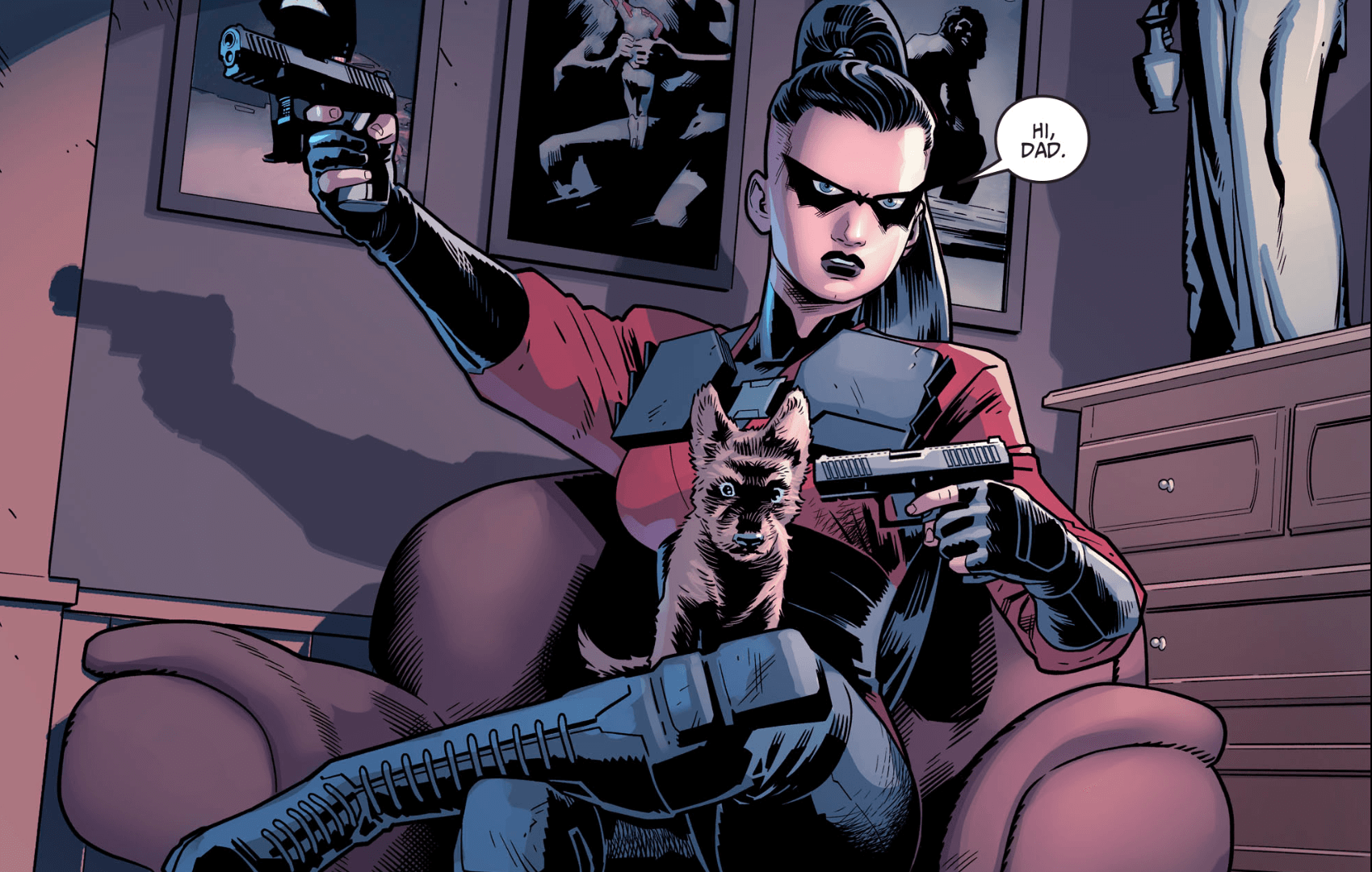 SEND THIS MAN TO PRISON. (Editor's note: AND THROW AWAY THE KEY)

What do you think is the most shocking death in Injustice? Let us know in our Community!