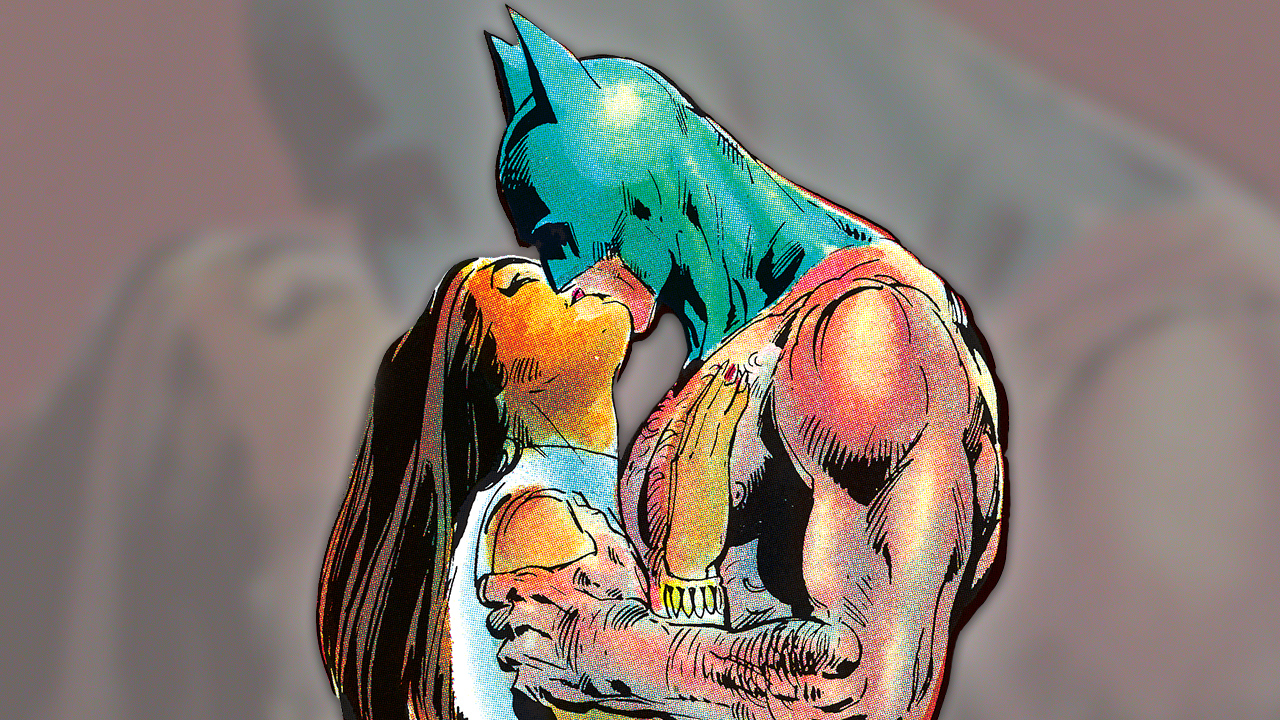 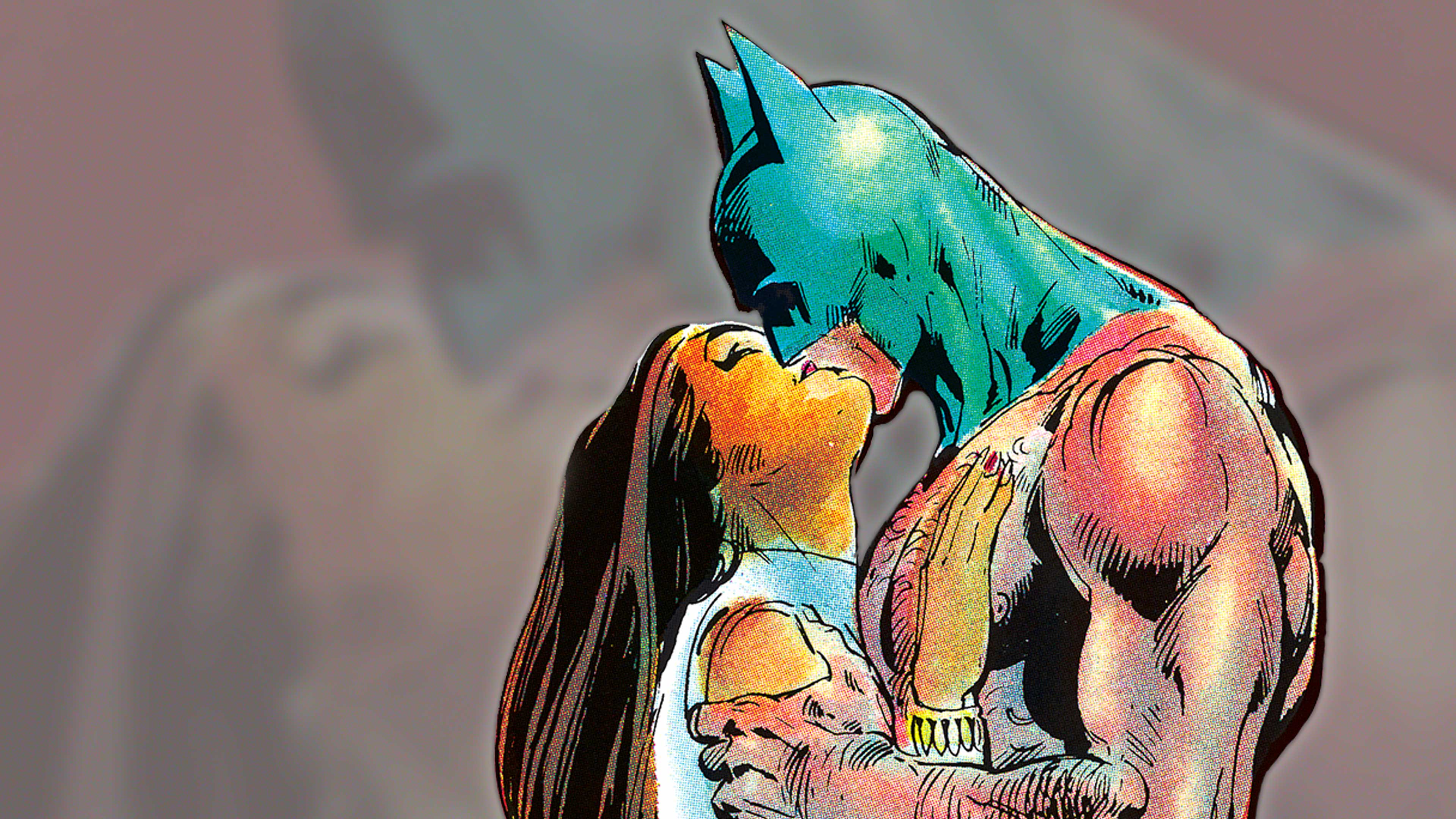 It’s Batman Week, which means we’re celebrating everything Dark Knight related. Today we’re going to spotlight an item that can’t be found in Batman's utility belt or the Batcave's trophy room – his black book of exes. Batman is a master at martial arts and forensics, but his skills as a boyfriend are, well, a little lacking. While his black book might be filled with memories of fiery romantic relationships, not all of them ended well. Let’s take a look… 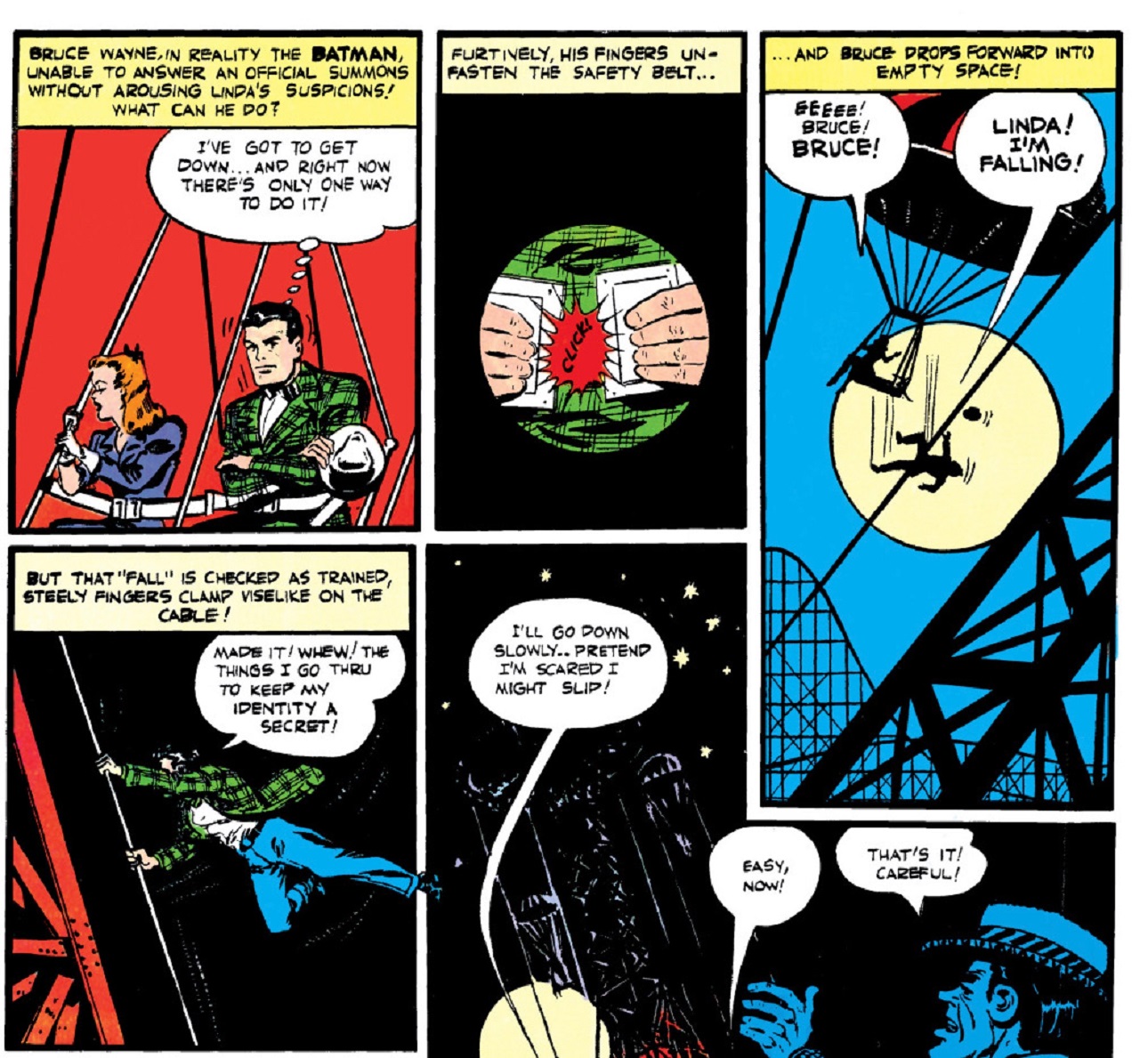 MEET CUTE: Linda was an old society friend who Bruce ran into on the street in 1941’s ‘Batman’ #5. He was intrigued by her decision to leave the socialite life behind and become a working girl, and they began a relationship.

BOYFRIEND BLUNDERS: Where to begin? There’s the time he left her stranded on a broken down ferris wheel (‘Detective Comics’ #69), and there’s another time when he got engaged to somebody else without telling her and blamed the whole thing on Batman (1943’s ‘Batman’ #15).

SINKING OF THE SHIP: It’s amazing that Linda held on as long as she did, considering everything Bruce did. In ‘The Brave and the Bold’ #197 she revealed that she got tired of Bruce messing around and moved on with her life.

MEET CUTE: Funny story, in ‘Detective Comics’ #501 Batman tracked Alfred to Paris where the butler’s daughter Julia sent her military men to attack the Dark Knight. She moved into Wayne Manor in ‘Batman’ #370 and she quickly became smitten with Bruce.

BOYFRIEND BLUNDERS: Dating someone living in your house is a bad idea, especially if they’re the daughter of your butler. Bruce was always very wishy washy with Julia and sent her mixed signals.

SINKING OF THE SHIP: Bruce was too busy dealing with his other exes to ignite the spark between them and in ‘Batman’ #390 Julia decided to cut her loses and move on.

MEET CUTE: Charlotte first appeared in 2011’s ‘Detective Comics’ #2, where it was revealed that her job as a reporter had previously put her in Bruce Wayne’s path.

BOYFRIEND BLUNDERS: Bruce had a habit of staring at Charlotte’s body instead of her eyes, and he had no issues about cheating on her with Catwoman. 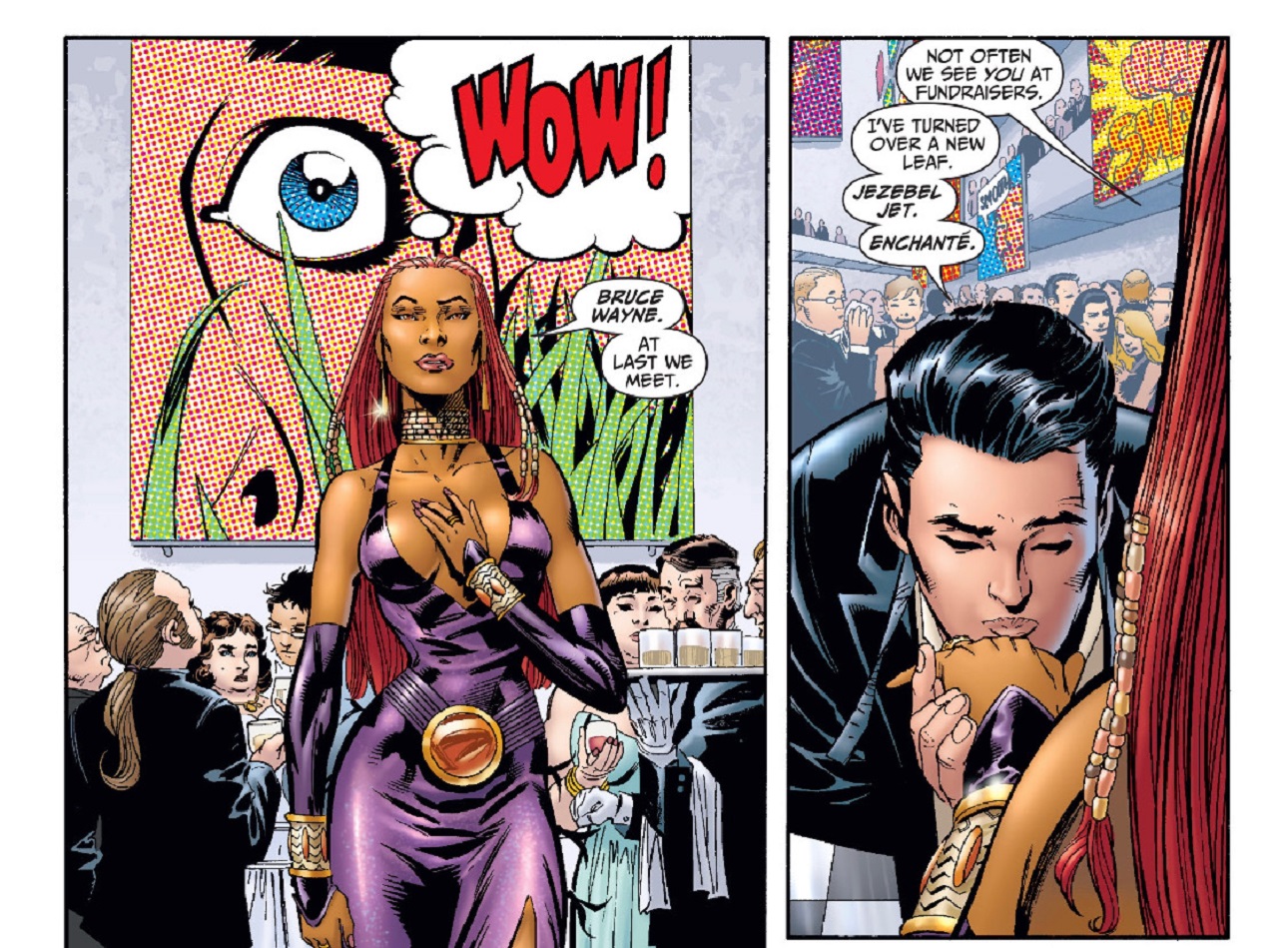 MEET CUTE: Jezebel and Bruce made eyes at each other during a cocktail event in ‘Batman’ #656.

BOYFRIEND BLUNDERS: Bruce stole Jezebel’s most prized possession, the last letter she received from her late mother. It turns out that Jezebel was evil (as if her name wasn’t a clue), so we’ll give Bruce a pass for this one.

SINKING OF THE SHIP: Jezebel revealing she was an evil Black Glove agent killed the relationship, then Talia killed Jezebel for real by crashing her plane in ‘Batman’ #681.

ODDS OF ENDGAME: 1,000 to 1. Their ship crashed along with Jezebel’s plane. 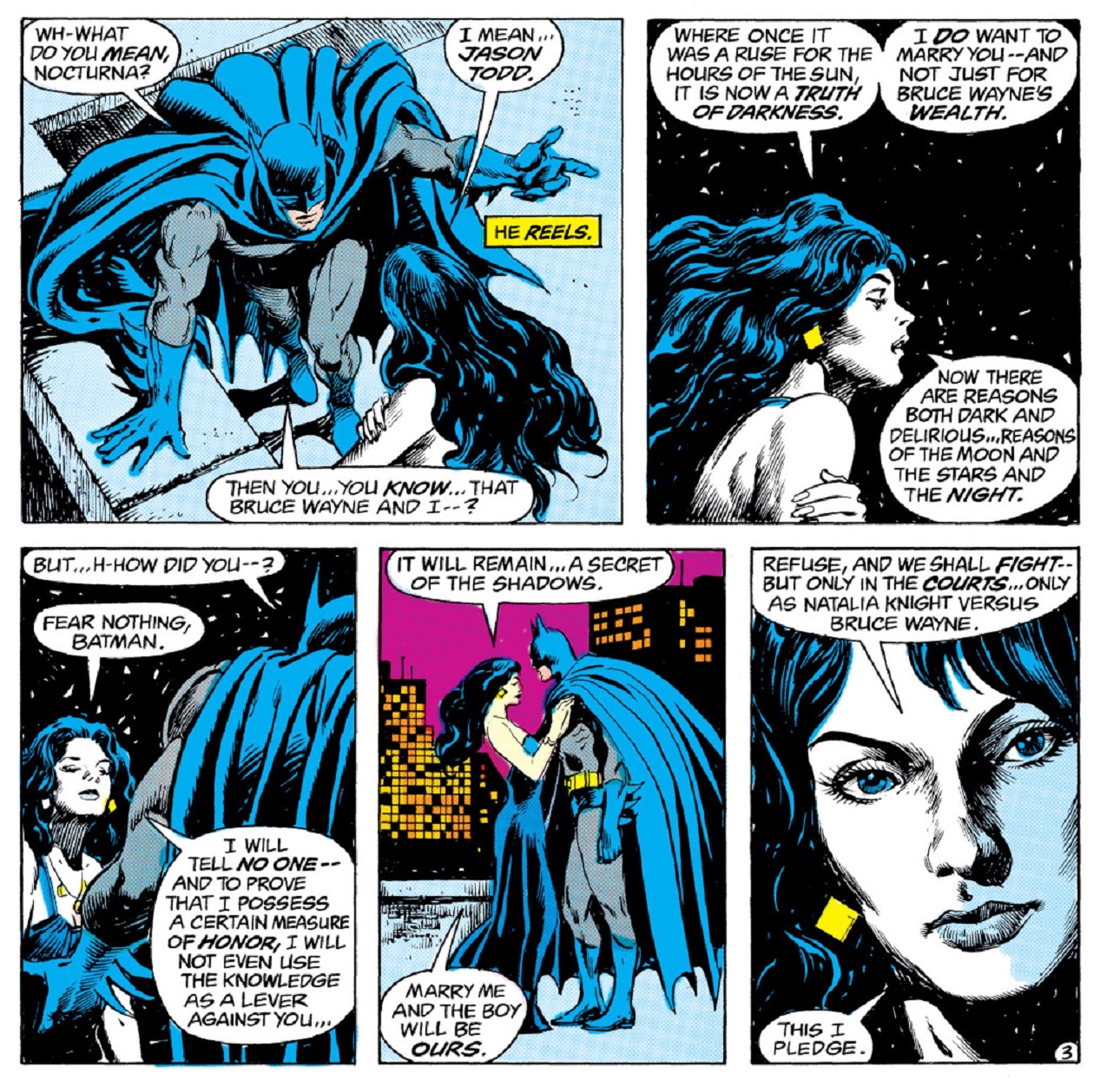 MEET CUTE: Natalia, who is kind of a vampire, met Bruce at a Wayne Manor party in ‘Batman’ #363. Under her criminal guise of Nocturna, she later fought Batman that same issue.

BOYFRIEND BLUNDERS: Did Batman learn nothing from his relationship with Catwoman? Don’t date a criminal, it only leads to trouble. As if that wasn’t bad enough, they were involved in some weird war over who got to be Jason Todd’s parent.

SINKING OF THE SHIP: Bruce was unable to save Natalia from the Night-Slayer in ‘Batman’ #391, which ended any chance the two of them had to be together.

ODDS OF ENDGAME: 500 to 1. Everything about this screams “red flag.” 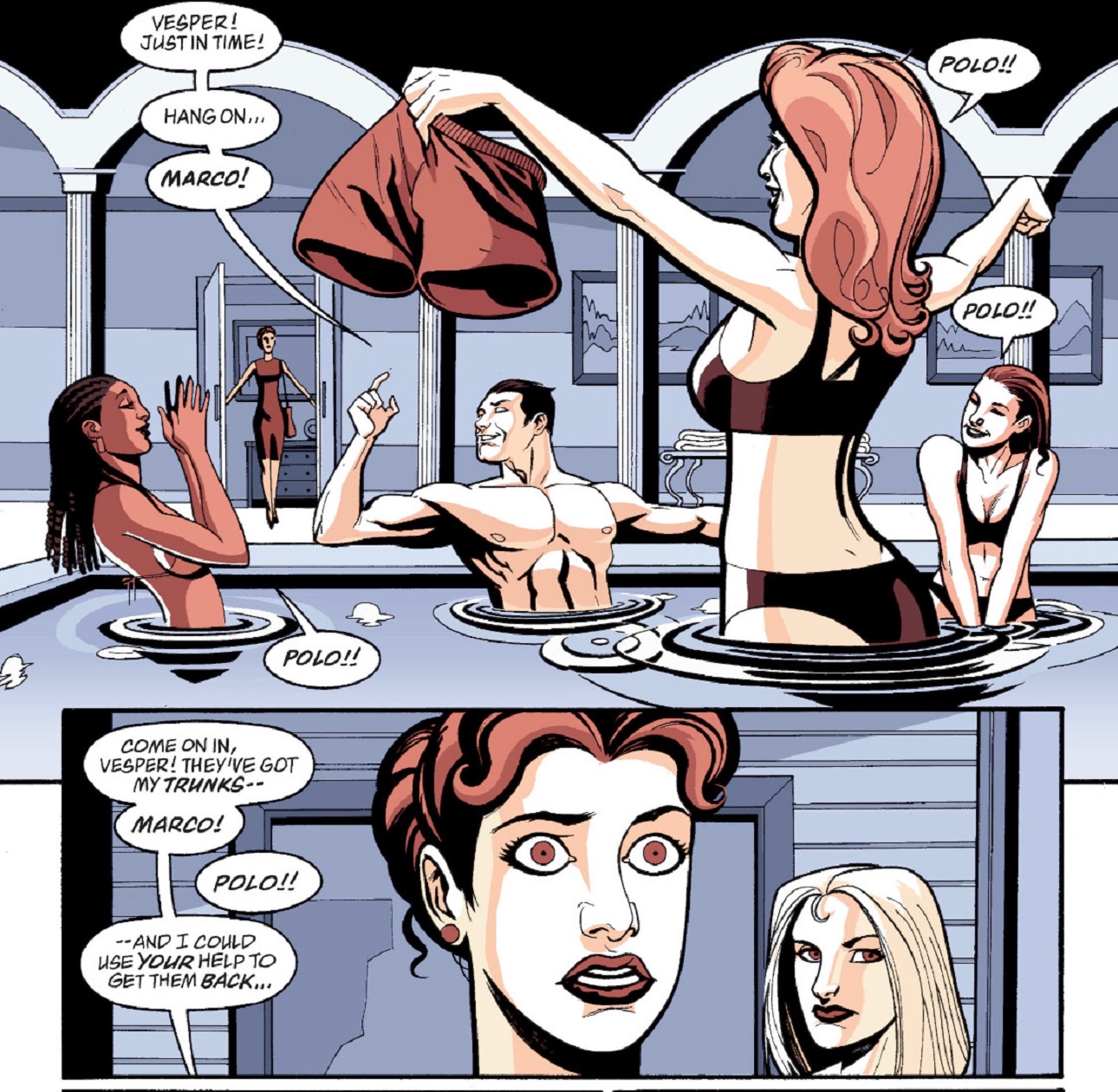 MEET CUTE: Vesper was a radio talk show host who met Bruce for an interview in ‘Batman’ #540. Bruce enjoyed talking to her and a romance soon followed.

BOYFRIEND BLUNDERS: Bruce invited Vesper over to his house while he had a hot tub full of bimbos in ‘Detective Comics’ #764. This is the type of thing Alfred would usually talk him out of. Afterwards, he stalked her as Batman for weeks.

SINKING OF THE SHIP: David Cain killed Vesper, and framed Bruce for the murder in ‘Batman: The 10 Cent Adventure’ #1.

ODDS OF ENDGAME: 200 to 1. She probably won’t be revived anytime soon, but you never know.

BOYFRIEND BLUNDERS: In ‘Batman’ #147 Bruce wanted to get rid of her, so he made a silhouette of himself kissing another woman. He later explained that it was just his cousin, which doesn’t really make it any better.

SINKING OF THE SHIP: 2011’s ‘Batman Incorporated’ #4 revealed that they were briefly engaged before Kathy’s duties as a Spyral agent forced her to end the relationship. Also they’re kind of related by marriage.

ODDS OF ENDGAME: 100 to 1. Batwoman never made Bruce’s heart race the same way Catwoman did. 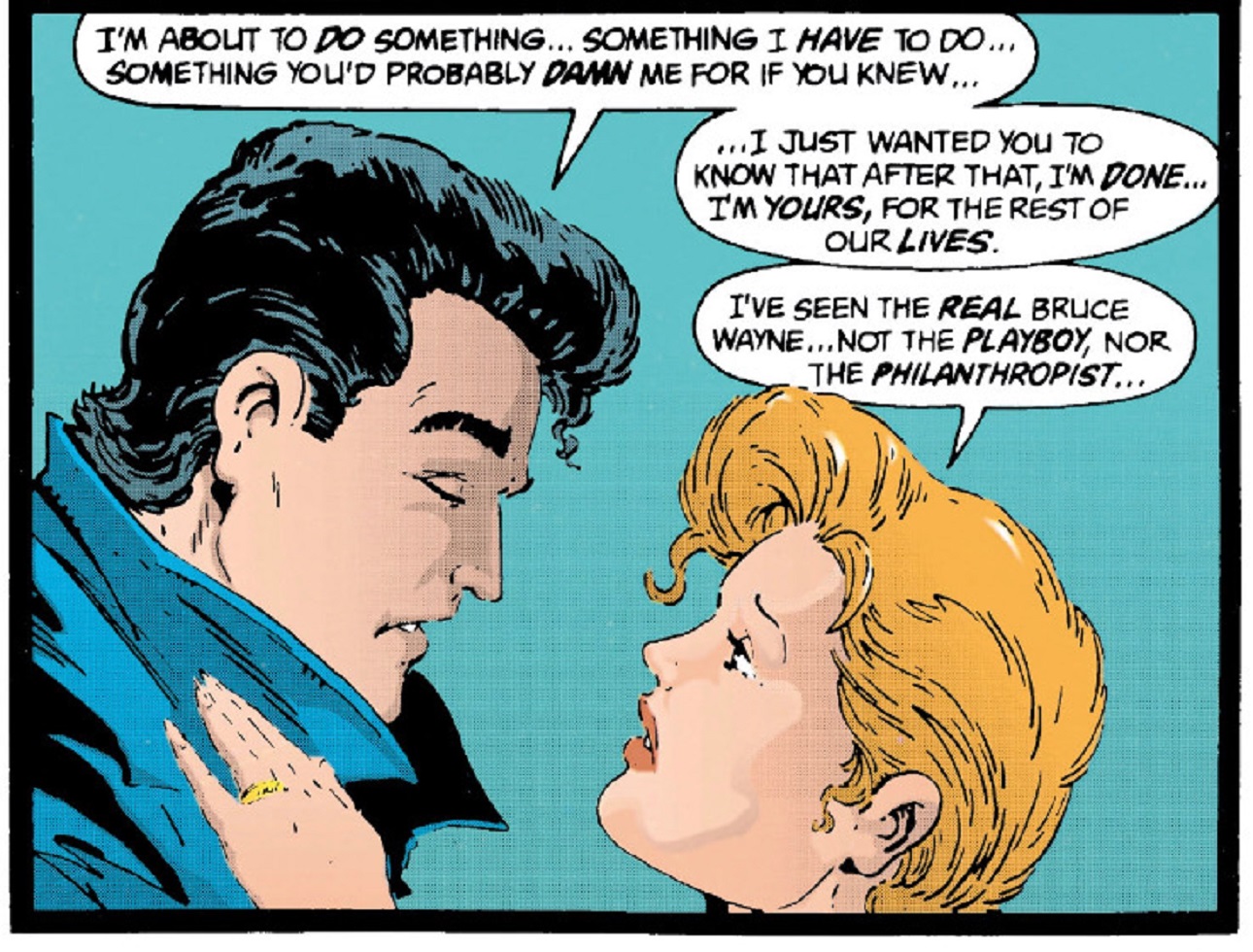 BOYFRIEND BLUNDERS: Bruce made romantic overtures towards Rachel even after she told him she was getting ready to become a nun. She eventually gave in and the two became engaged, but it was still a bit skeevy.

SINKING OF THE SHIP: After her father died, Rachel ended her engagement to Bruce and became a nun in ‘Detective Comics’ #578. 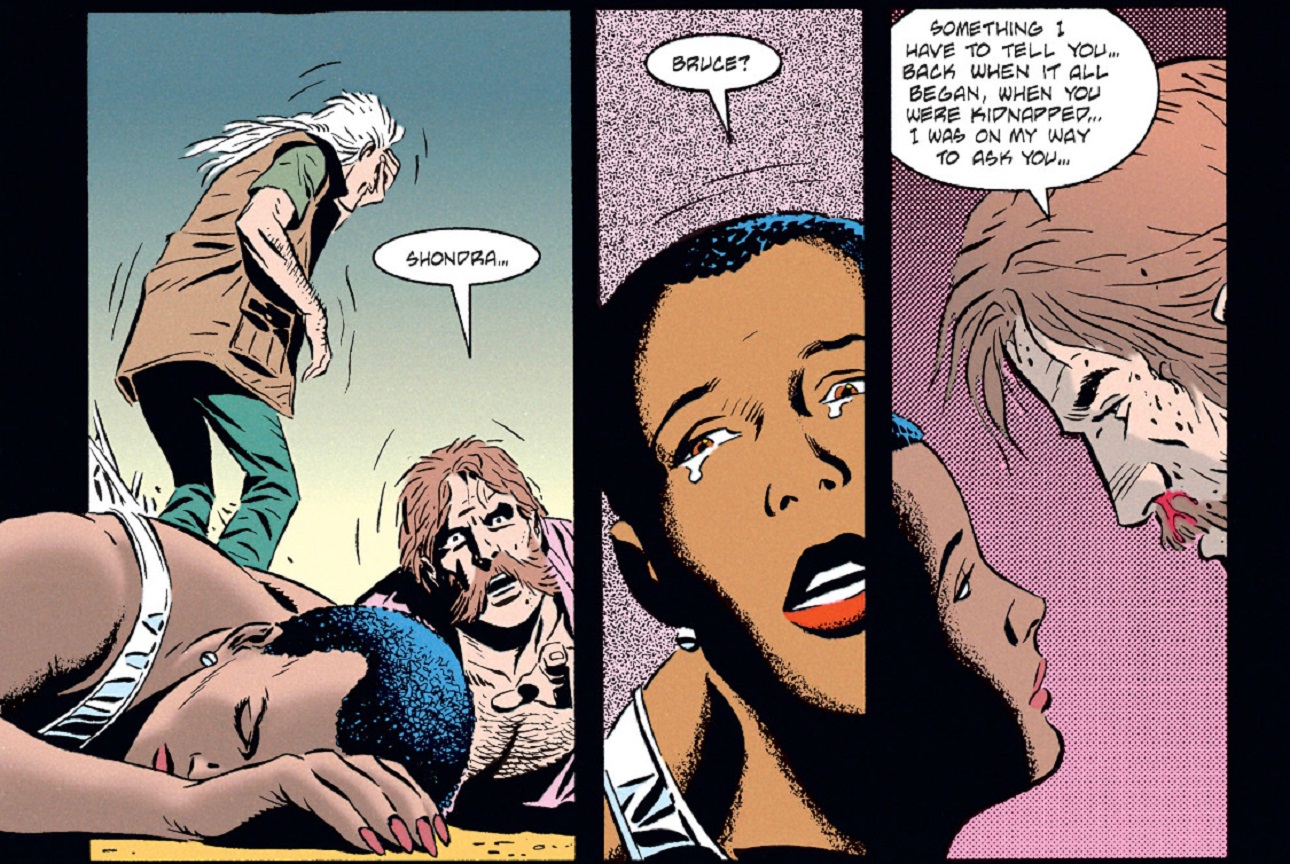 MEET CUTE: In ‘Batman’ #488 Tim Drake referred Bruce to Dr. Shondra Kinsolving, a physician who had been helping Tim’s handicapped father. Tim had intended Dr. Kinsolving to be a doctor for Bruce, not a hookup.

BOYFRIEND BLUNDERS: In ‘Batman: Legends of the Dark Knight’ #61, Bruce revealed that he was going to ask Shondra to marry him, which is a bit weird considering the fact that they hadn’t even had a date or kissed yet.

SINKING OF THE SHIP: It was eventually revealed that Shondra had healing powers, which she used to repair Bruce’s shattered spine after the events of ‘Knightfall.’ Unfortunately the experience tore her mind apart, and left her with the mental capabilities of a small child.

ODDS OF ENDGAME: 30 to 1. It was revealed in ‘Batman: Hush’ that she got her mental capabilities back, so maybe Bruce should look her up. 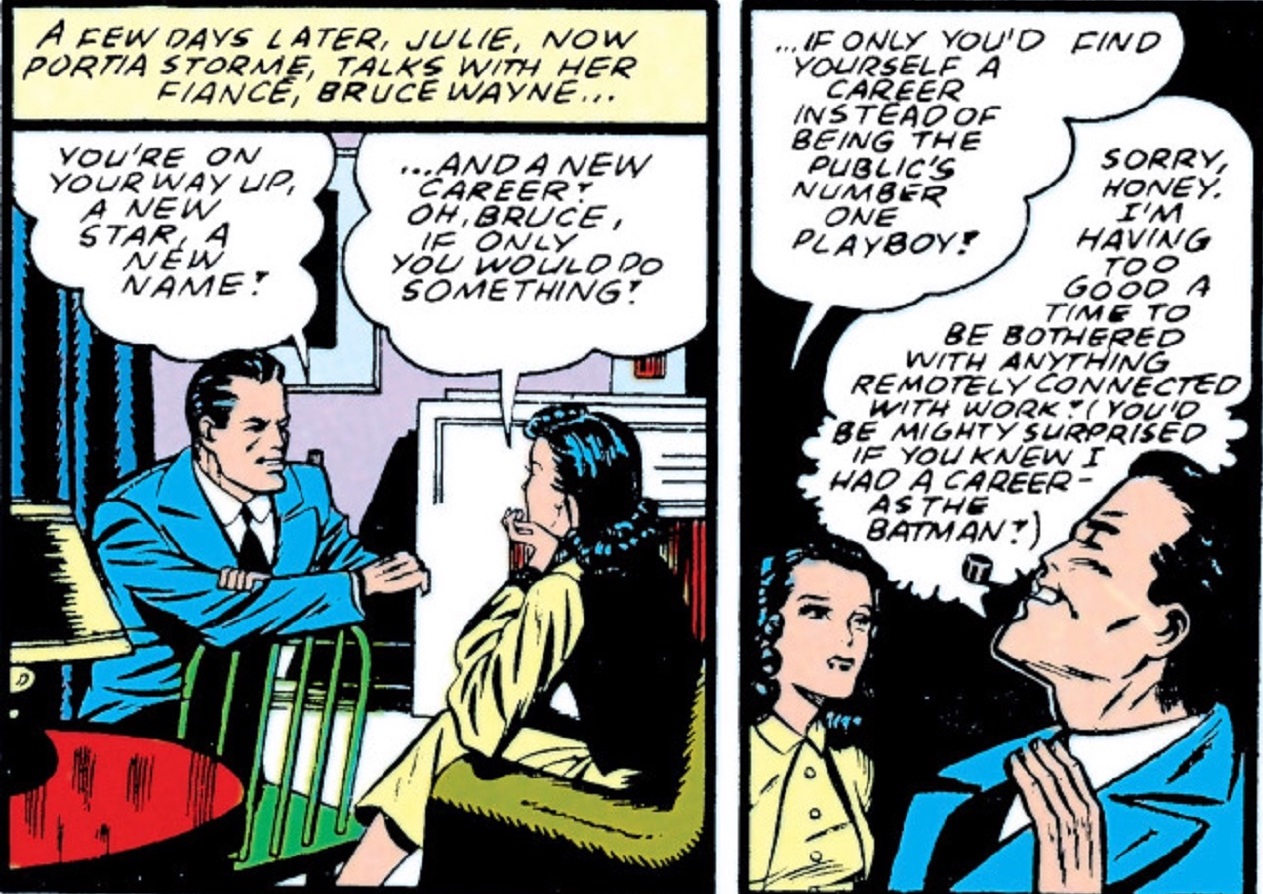 MEET CUTE: Bruce and Julie were college sweethearts who met while working on a stage production. By the time she was introduced in 1939’s ‘Detective Comics’ #31, the two were already engaged.

BOYFRIEND BLUNDERS: Every time Julie encouraged Bruce to get a job he would laugh in her face. There’s also the weird time when he had her dress up as Robin, and if you think we’re joking then check out 1941’s ‘Detective Comics’ #49.

SINKING OF THE SHIP: Julie eventually got tired of telling Bruce to make something of himself, so she called off their engagement in ‘Detective Comics’ #49. Julie later became the princess of a European country in ‘World’s Finest’ #248, so at least she landed on her feet.

ODDS OF ENDGAME: 25 to 1. You never forget your first love. 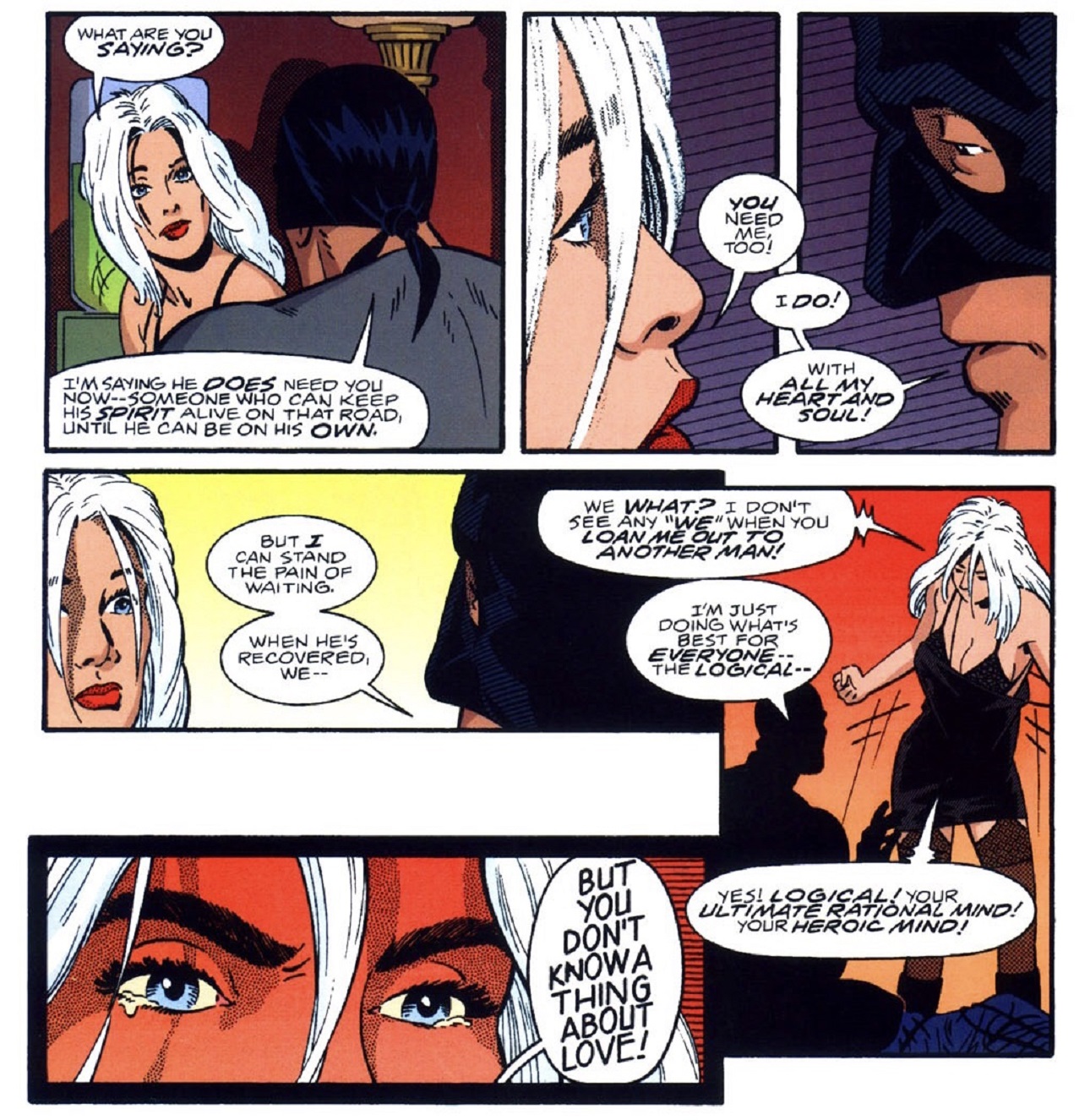 MEET CUTE: Silver was a high society girl who Bruce met at a yacht party in ‘Detective Comics’ #470. Unlike Bruce’s other society dates, Silver was smart enough to quickly deduce that he was Batman, which made any potential relationship difficult.

BOYFRIEND BLUNDERS: In ‘Batman: The Widening Gyre’ #6 Bruce attacked Silver and accused her of being an evil robot. Amazingly she immediately accepted his apology.

SINKING OF THE SHIP: After years of breaking up and getting back together, they got engaged in ‘Batman: The Widening Gyre’ #6, but Silver’s life was cut short when the villainous Onomatopoeia sliced her throat.

ODDS OF ENDGAME: 20 to 1. Batman’s friends have come back from worse things than sliced throats. 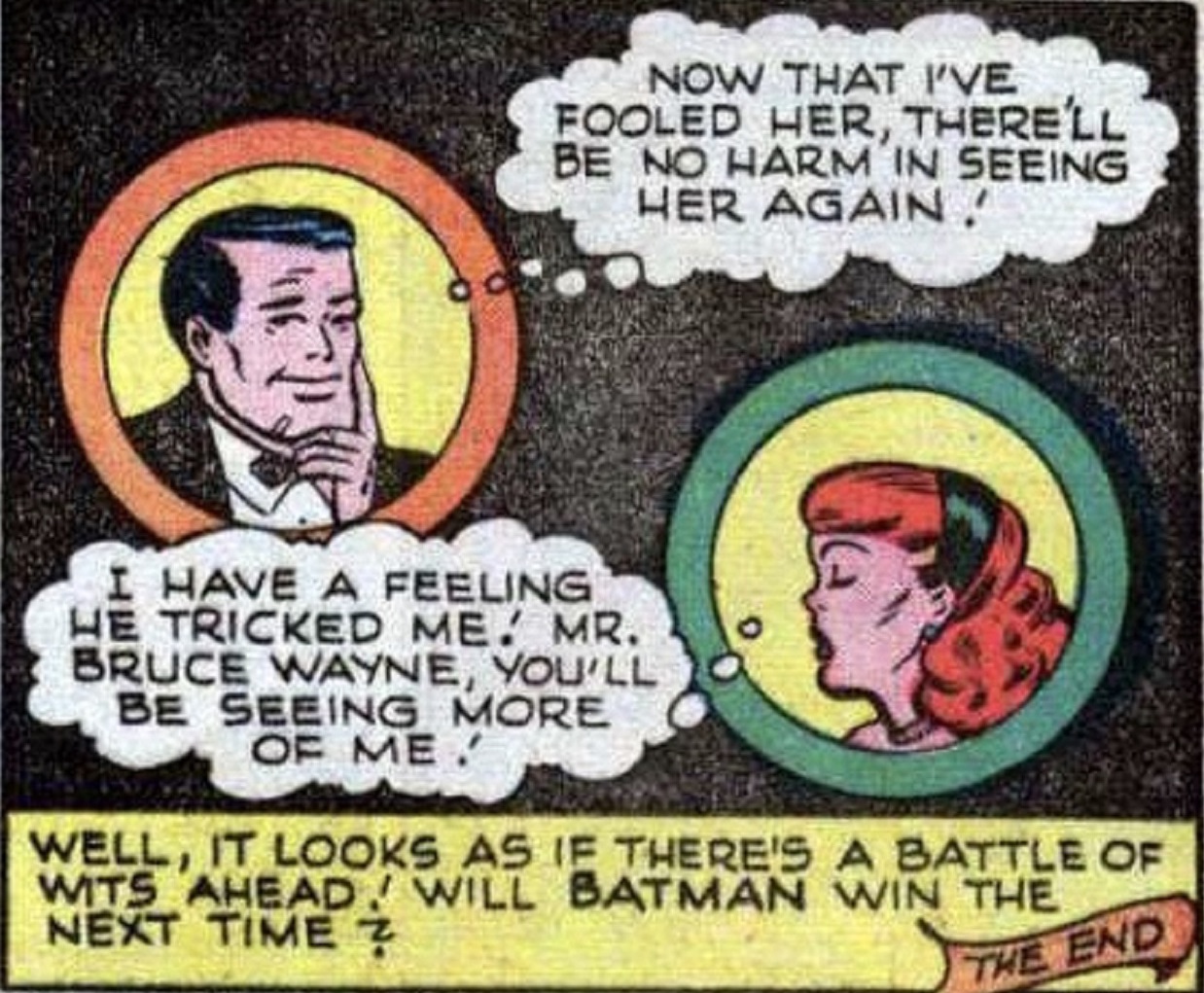 MEET CUTE: Vicki was a photojournalist who was assigned to photograph a party Bruce was attending in 1948’s ‘Batman’ #49. Vicki began to piece together Bruce’s other identity, but he was able to throw her off track. He enjoyed the mental exercise and decided to keep dating her.

BOYFRIEND BLUNDERS: Bruce once had the Human Target impersonate him during a date with Vicki in ‘Batman’ #518. Outsourcing your dates to imposters is a jerk move, even if you’re trying to protect your secret identity.

SINKING OF THE SHIP: Honestly, this is one resilient ship. No matter how much Bruce puts Vicki off, she keeps on coming back and he doesn’t seem too eager to send her away either.

ODDS OF ENDGAME: 10 to 1. She’s been in almost every era of the Dark Knight’s life, so don’t count her out yet. 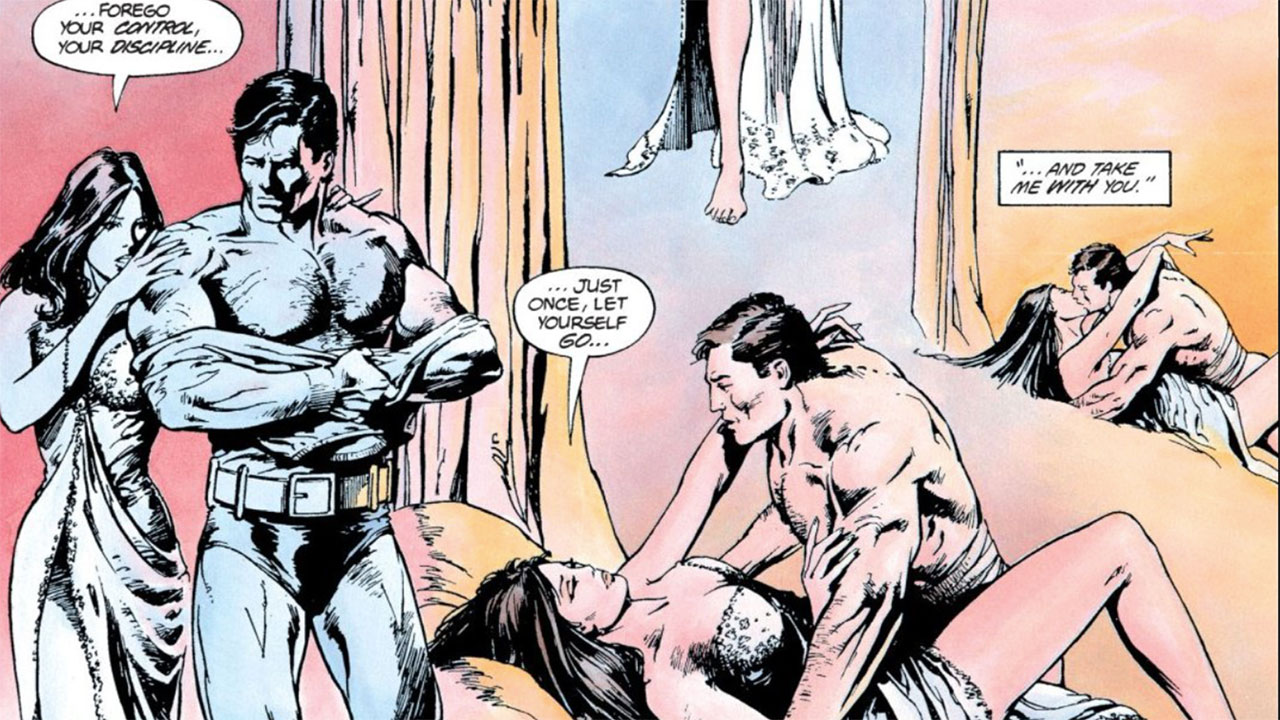 MEET CUTE: Batman first met the daughter of Ra’s Al Ghul in ‘Detective Comics’ #411 when he saved her from Doctor Darkkk. The two were very attracted to one another, but her moral ambiguity and allegiance to her father always kept them apart.

BOYFRIEND BLUNDERS: In ‘DC Special Series’ #15 Ra’s performed a wedding ceremony between Batman and Talia. During the honeymoon Batman knocked out Talia when she tried to consummate the marriage, and left their suite to go do Batman stuff. It’s amazing they got back together after that at all.

SINKING OF THE SHIP: Their on-again off-again romance was pretty much killed when Talia started a terrorist organization called Leviathan as revenge for their breakup.

ODDS OF ENDGAME: 5 to 1. She may have tried to kill him, but they still have a son binding them together. 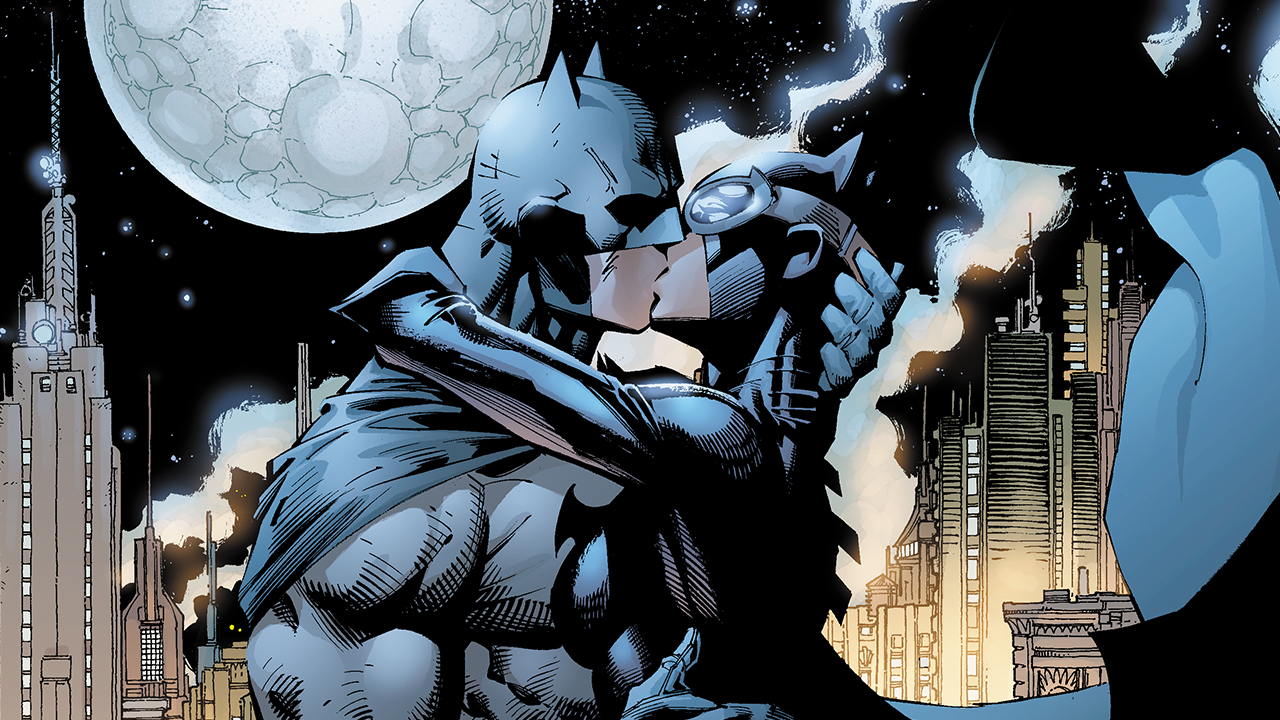 MEET CUTE: They’re still arguing on the circumstances of their first meeting, but our comics library says they first met when she tried to rob a yacht in 1940’s ‘Batman’ #1. The Dark Knight was so taken by her beauty that he actually let her escape.

BOYFRIEND BLUNDERS: Bruce and Selina (under the guise of Elva Barr) first got engaged in 1943’s ‘Batman’ #15, and she later learned the engagement was a sham to get her to give up crime. How were you expecting this to end Bruce? Were you planning on taking this charade through the honeymoon?

SINKING OF THE SHIP: Selina ran out on their wedding in 2018’s ‘Batman’ #50, but you never know what the future might hold.

Who do you ship Batman with? Do you disagree with our odds? Let us know in our Community!