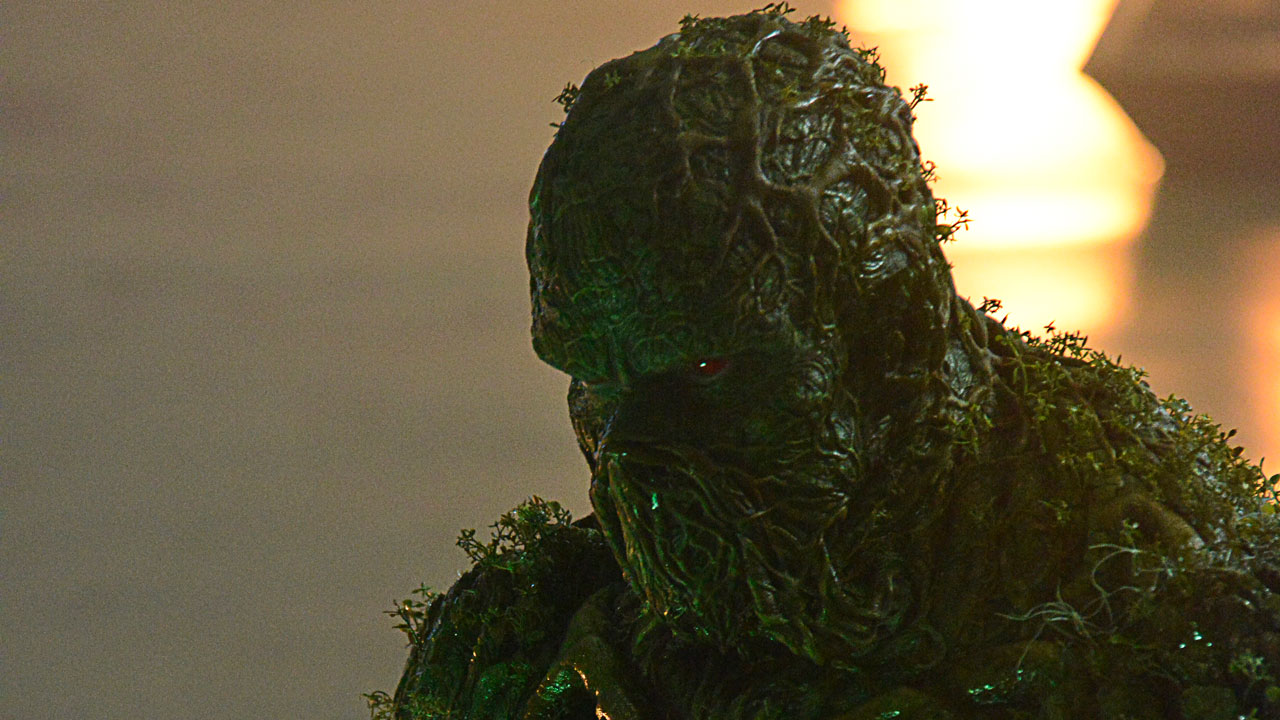 With DC Universe's original series Swamp Thing premiere today, Friday, May 31st, we sat down to chat with executive producer and showrunner Mark Verheiden. A veteran of such shows as Battlestar Galactica, Falling Skies, and Daredevil, Verheiden brings a lifetime love of comics and genre fiction to his work. Here he talks about Swamp Thing's first season story arc, the romance between Swampy and Abby Arcane, and the comics that inspired the show...

Sure. Look, I actually remember -- I shouldn’t say this -- I remember buying the original Wein-Wrightson stories back in the day. I wish I kept them all. So I was always really impressed with the sort of world they created with Swamp Thing and the origin story for Swamp Thing. When [writer] Alan Moore came on board, they called it sophisticated suspense, which it really was. It’s amazing how well those stories still hold up… I had sort of dropped out of reading comics for a while, and the Alan Moore Swamp Things are what brought me back in. So, I’d been a fan forever of these stories, of this world, and I think it’s a combination of the two basically. The guys who originated it, who did an amazing job creating this character, and then Alan Moore who sort of took it and ran with it. He just created a very intriguing, sensual, Southern Gothic, scary, get-under-your-skin sort of world with Swamp Thing; that I hadn’t seen in comics before really, and which we are trying to sort of capture with the show. That feeling that there could be something behind any rock. But there’s also a sensual feel to the world. I mean, those stories really run the gamut. I think that inspired not only me but also James Wan and the other folks that were involved.

The very adult sort of romance that blossomed between Abby and Swamp Thing, that plays a role in our first season. It is a slow build, because obviously what’s happened to Alec Holland is cataclysmic in terms of how he’s changed. So Abby Arcane has to understand what’s happened to him, and has to come to terms with that too… I think we were just inspired across the board by those books.

Can you describe this first season’s story arc?

Well, it’s the story of Abby Arcane, who comes to this small town that she grew up in, and that she left about 14 years ago under very dark circumstances. She has now become a doctor with the CDC, and she’s called back to town because an environmental catastrophe has happened, creating an epidemic, of a very strange plant-based disease in the town. So she returns to figure out if there’s a way she can help these people in this small town, but is immediately thrust back into the old life that she had and this unfortunate situation she had with her surrogate parents, the Sunderlands, and a whole bunch of things that she left behind. But at the same time, it’s a story about her meeting with Alec Holland, coming to like Alec Holland, only to have him brutally taken away from her, and then to have him return in the form of Swamp Thing. So in some ways, season 1 is Swamp Thing’s origin, but it’s also about Abby Arcane’s journey to come to understand that the man that she’d come to like, Alec Holland, is a man she’s come to like even more, or even be romantic toward in the form of Swamp Thing. She bonds with him over the fact that they were both scientists, but there’s an entire world out there neither one of them knew existed, that they discover over the arc of this season – The Green – which is not just awful, but also beautiful, and also a supernatural [force] that’s been unleashed by what Avery Sunderland has been doing to the swamp, as you see in the pilot. I think it’s essentially an origin story, but it’s also Abby’s story of trying to find the humanity in Swamp Thing, and realizing that there’s more to him now than there was before that almost overcomes what he’s become – the monstrous figure he’s become.

It appears the season starts from a place of science fiction, and then quickly progresses into supernatural horror.

Yeah, supernatural forces have been unleashed by the swamp that begins to affect our characters emotionally, but also affects characters in very physical ways. Essentially, unlike other places that have been affected ecologically by dumping and stuff, when they’ve done it to this swamp, it unleashes a supernatural force that also comes out in response. A darkness has been released that’s coming into Marais, and it kind of falls on Abby Arcane, and Swamp Thing to some extent, to find a way how to stop that from taking over the town; and at the same time, trying to find themselves, because both of them have enormous emotional issues in terms of why they’re in Marais. Especially Abby with her very sad backstory, of having lost a friend. All things you’ll see as the season progresses.

What do you think Crystal Reed, Andy Bean, and Derek Mears are so well suited for the roles of Abby, Alec, and Swamp Thing?

Well, Crystal just brings a wonderful empathy and reality to the part. She’s obviously beautiful, but she’s also very intelligent. She brings a professionalism to her role as a CDC professional. I think she embodies Abby Arcane in a very modern sense, and can play incredibly emotional scenes. Andy Bean as Alec Holland brings us likability, smarts, and a guy you really care about. So when terrible things happen to him, I think you’re able to embrace that quickly. By the way, at the end of the pilot, that’s not the last we’ll see of Andy Bean. Even though Swamp Thing is not a character that turns back and forth into Alec Holland as a human, it’s not the last we’ll see of the Andy Bean character… Then finally Derek Mears brings a real soulful quality, I think, to Swamp Thing. Derek is deeply committed to the whole world of Swamp Thing, a huge fan of the [comic] series, and obviously has an enormous amount of experience playing creatures and guys in suits. But forget all that -- he’s really an excellent actor and he brought all those chops to performing underneath our amazing suit that was created by Fractured FX for us. So we just got lucky with all three.

One last question… Is there any chance that what could happen in the future is so horrifying we’ll see Abby’s hair turn white as it is in the comics?