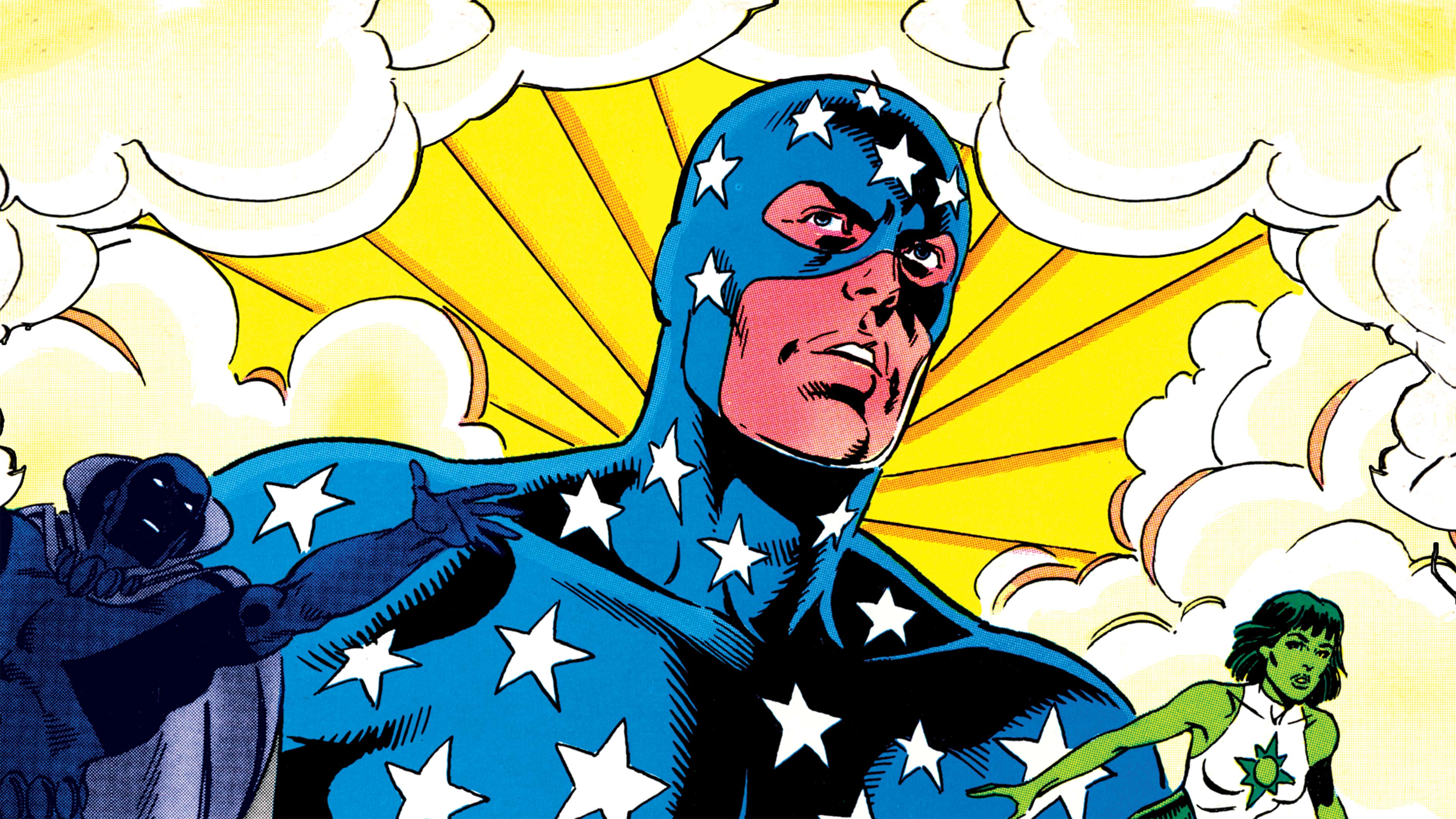 Like many of writer Geoff Johns' contributions to the DC Universe, Stargirl is a TV series about legacy. How we take the lessons from those who came before us, and apply them to continue or advance the ideals they put into motion -- especially when it comes to the Justice Society of America, the original superhero team, that would go on to inspire all others. Courtney Whitmore isn’t alone in establishing a legacy. She’s been joined in the show by a new Wildcat, a new Hourman, a new Doctor Midnight -- and who knows who else might turn up? But one thing Stargirl’s colleagues all have in common is where they first appeared in the comics: as members of a team all about legacy, the Golden Age-inspired heroes known as “Infinity, Inc.”

Every member of Infinity, Inc. is one with roots in the Golden Age of comics. In fact, for most of its run (until a Post-Crisis on Infinite Earths changeup occurred) the team operated in the Golden Age world of Earth-Two, decades after the prime years of the Justice Society of America in the 1940s. Yolanda Montez, Rick Tyler, and Beth Chapel were all latecomers to the team, but it may be useful to keep this roster list handy so you know the heroes that could be around the corner... 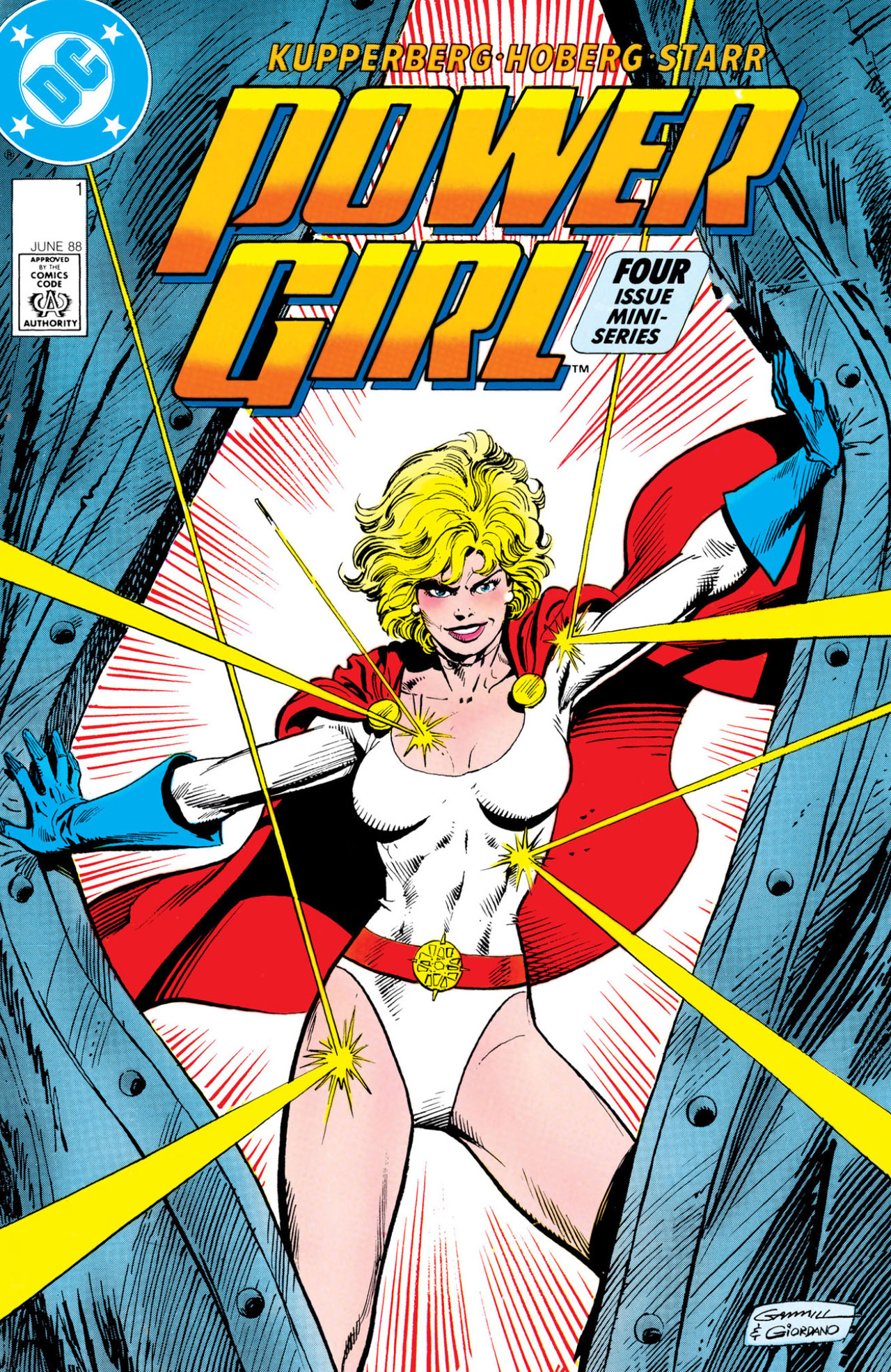 Ever super-team worth its salt needs a Kryptonian on the roster, and Infinity, Inc. was no exception. Kara Zor-L, Earth-Two’s own alternate version of Supergirl, was one of the founding members of this legacy team. Curiously, while TV’s Supergirl is going on 6 seasons, this multiversal counterpart to the maid of might has yet to appear in live action. Could DC be saving her for an Earth-Two debut? 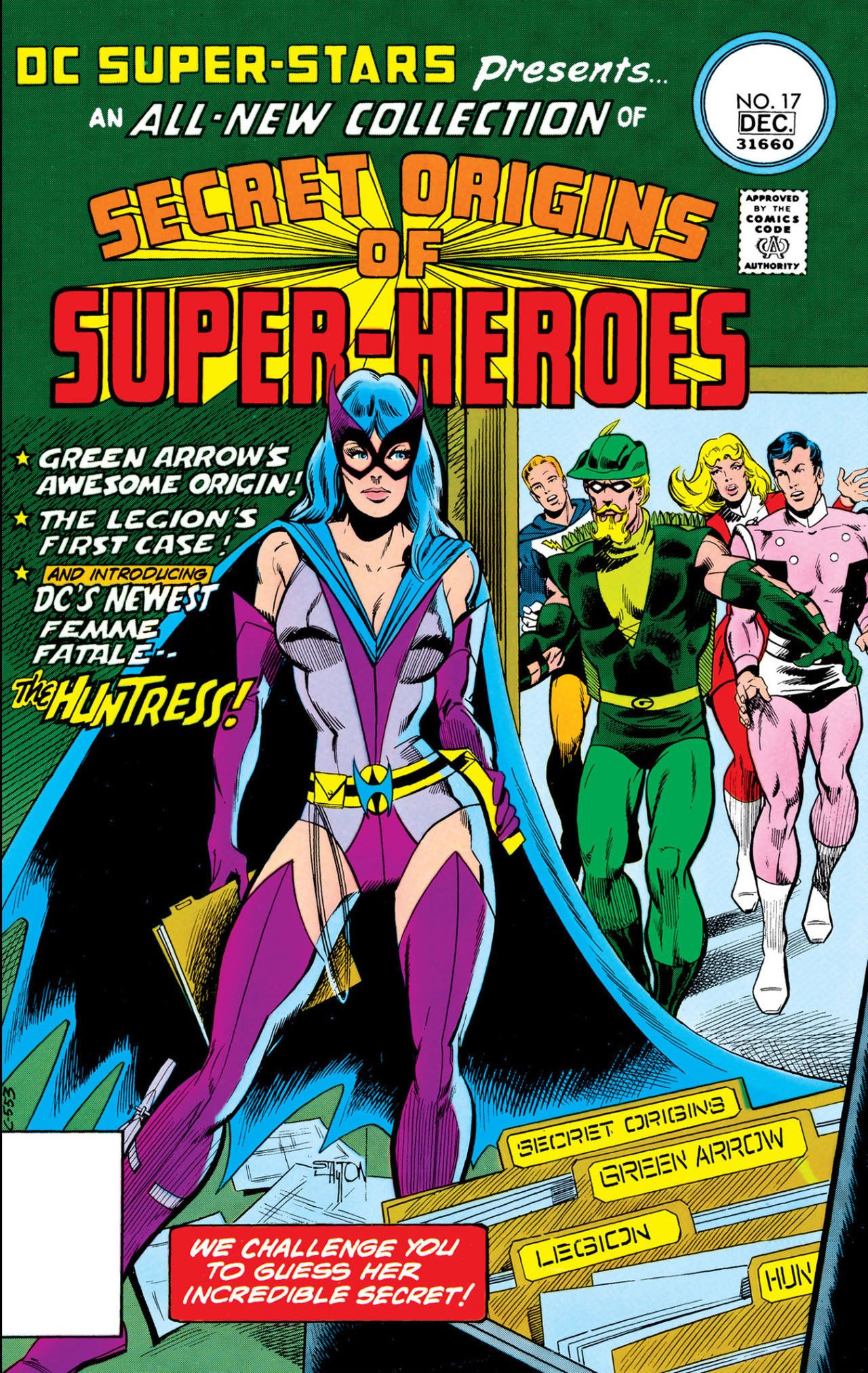 Before Bertinelli, The Huntress of Gotham City was Helena Wayne: the daughter of the Golden Age Batman and Catwoman. Remember, Stargirl isn’t the first legacy hero to star in her own live action series: Huntress was doing this way back in 2002. If there is a Batman in Stargirl’s world, then Huntress would make for the mantle’s ideal representative.

Though her origin story has undergone a number of revisions, Lyta Trevor was originally the daughter of the Golden Age Wonder Woman and, naturally, Steve Trevor. With the powers of an Amazon, Fury completes the Golden Age reflection of DC’s Trinity which forms the backbone of Infinity, Inc. Lyta would eventually go on to marry fellow teammate Silver Scarab, and play a significant role as representative of The Furies in Neil Gaiman’s Sandman.

With the appearance of the Green Lantern power battery in Stargirl, the legacy of Alan Scott is already a cornerstone of the show’s mythology. So while the Green Lantern himself may not be appearing any time soon, that doesn’t by any means rule out his kids. Thanks to years of exposure to the Starheart which gave the Golden Age Green Lantern his powers, his children Jade and Obsidian were born with abilities of their own -- one of light, and one of darkness. In fact, Stargirl and Obsidian were already shown as colleagues on TV’s Legends of Tomorrow. Could he and his sister follow her here? 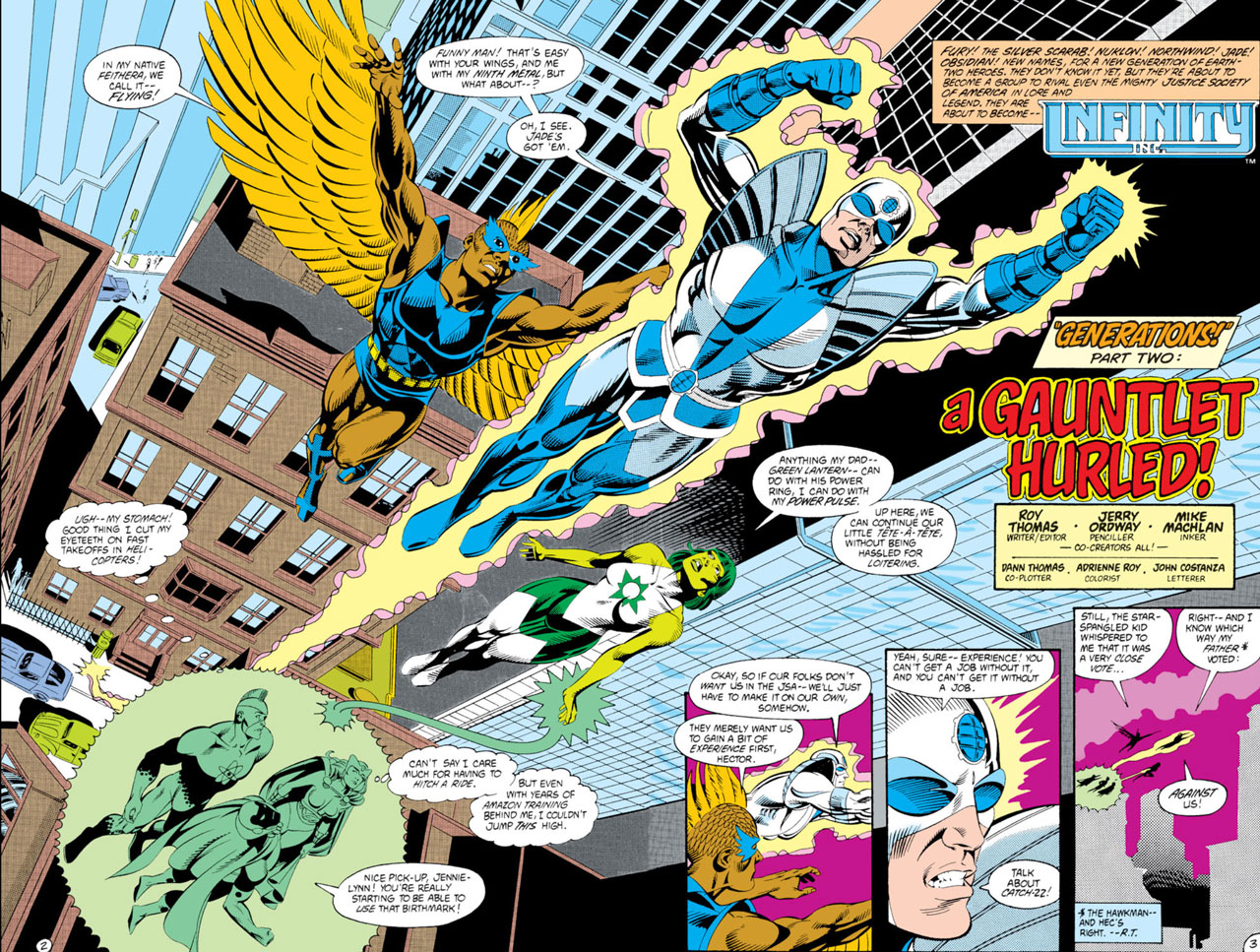 With alien worlds and endless reincarnations, few legacies are more complex than the one of Hawkman and Hawkgirl. It may be par for the course, then, that the winged warriors have two entirely different representatives in Infinity, Inc, each with their own complicated histories. Northwind is half-human, half-Feitheran, an avian race which clashed with Hawkman until he was able to broker a treaty. Inspired by Hawkman, Northwind left his Feitheran homeland to make the world a better place. Silver Scarab, on the other hand, is Hector Hall, Hawkman and Hawkgirl’s own grown-up son. Hector became the Silver Scarab after creating a suit entirely out of the Nth Metal which gave his parents flight, and later adopted the identities of Sandman and Doctor Fate. We can imagine Courtney’s head spinning just trying to get Hector’s story straight. 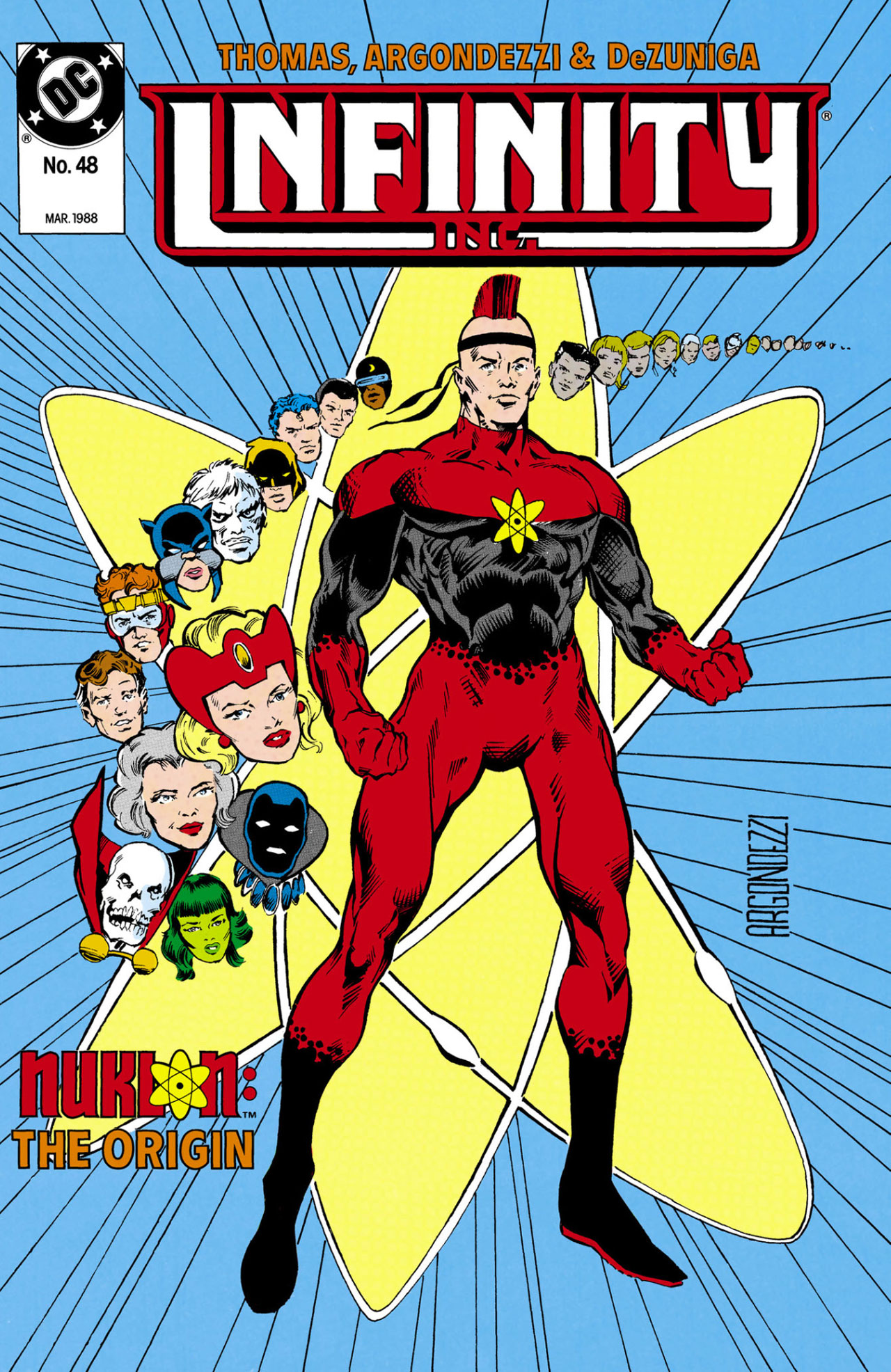 Albert Rothstein is the godson of Al Pratt, the original Golden Age Atom. He inherited his size-changing powers from his grandfather, a Golden Age Super-Villain. But more potent than his ability to grow to skyscraper size is his penchant for unlikely friendships, whether it’s the unstable Obsidian or the Super-Antihero Black Adam. Nuklon eventually took on the name Atom Smasher and joined the JSA… where he became an early Super Hero crush for our own Courtney Whitmore. Nuklon may not be appearing on Stargirl this season, but we can certainly imagine some tension between these legacy heroes down the line.

Unlike the other members of Infinity Inc, Brainwave doesn’t seek to continue a legacy, but to redeem it. Henry King Jr. is the son of, who else, Dr. Henry King, who as the telepathic Brainwave was one of the most persistent foes of the original JSA. As a matter of fact, this is the only hero on the roster who we can say with certainty will show up later this season, with a future episode of Stargirl named after him. How this complicated relationship with legacy and redemption will weigh on Courtney is just the kind of juicy drama that keeps us watching. 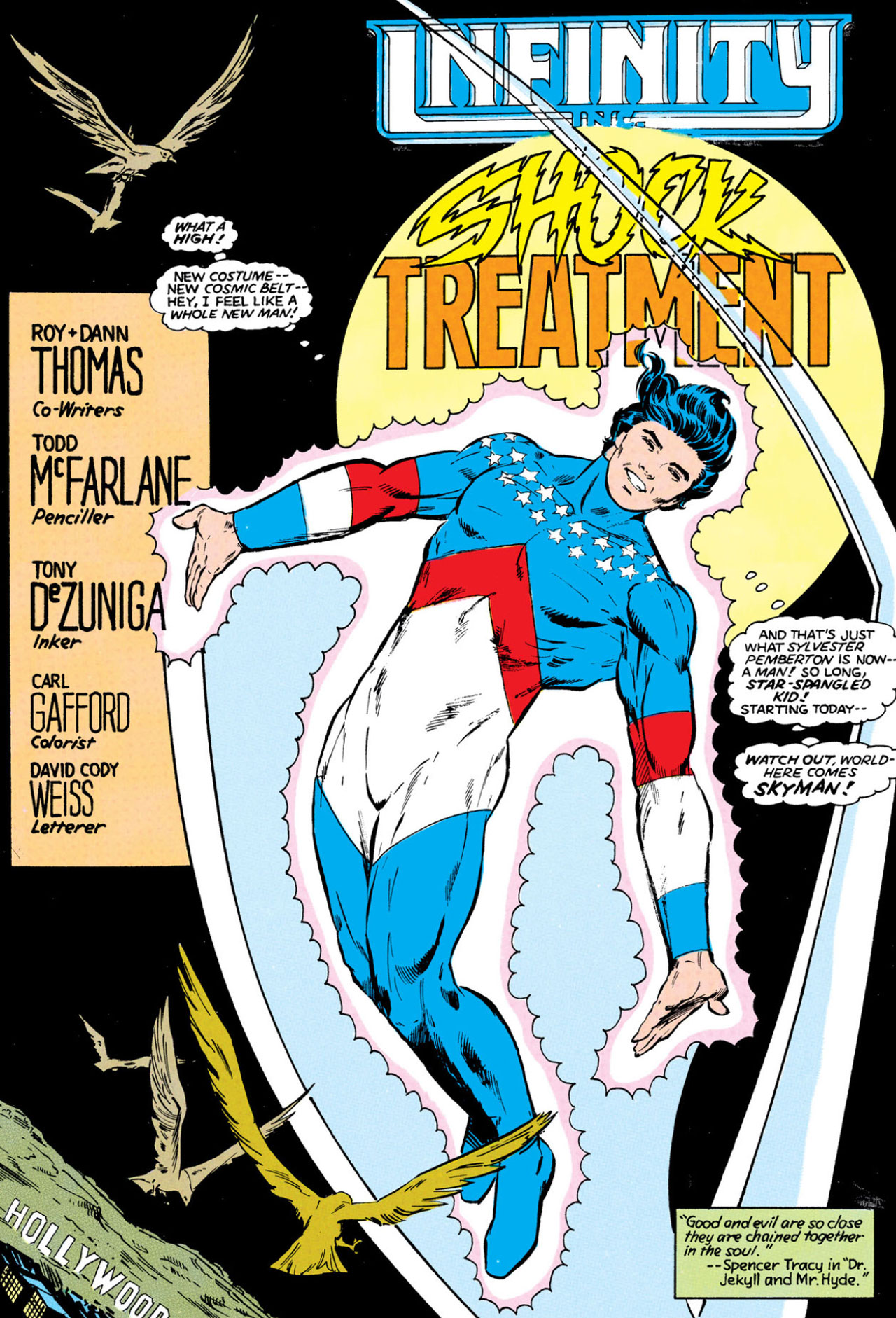 The leader of Infinity, Inc is someone that Stargirl fans have already met, and a Golden Age hero himself: Sylvester Pemberton, the original Star-Spangled Kid. Sylvester Pemberton was a child Super Hero during his original run at crime fighting, and came out of retirement to serve as this next generation’s elder statesman under the name of “Skyman.” Sadly, the team wouldn’t survive long after the star-spangled hero was crushed by the team’s enemies… but the spirit of the legacy of DC’s Golden Age heroes would live on even after him, in a new incarnation of a modern day JSA. With the passing of Skyman, Stargirl herself plays an integral role in keeping the newest crop of heroes in touch with the traditions of the old, and carrying them into the future.

Who’s your favorite legacy superhero? Let us know in our Community!