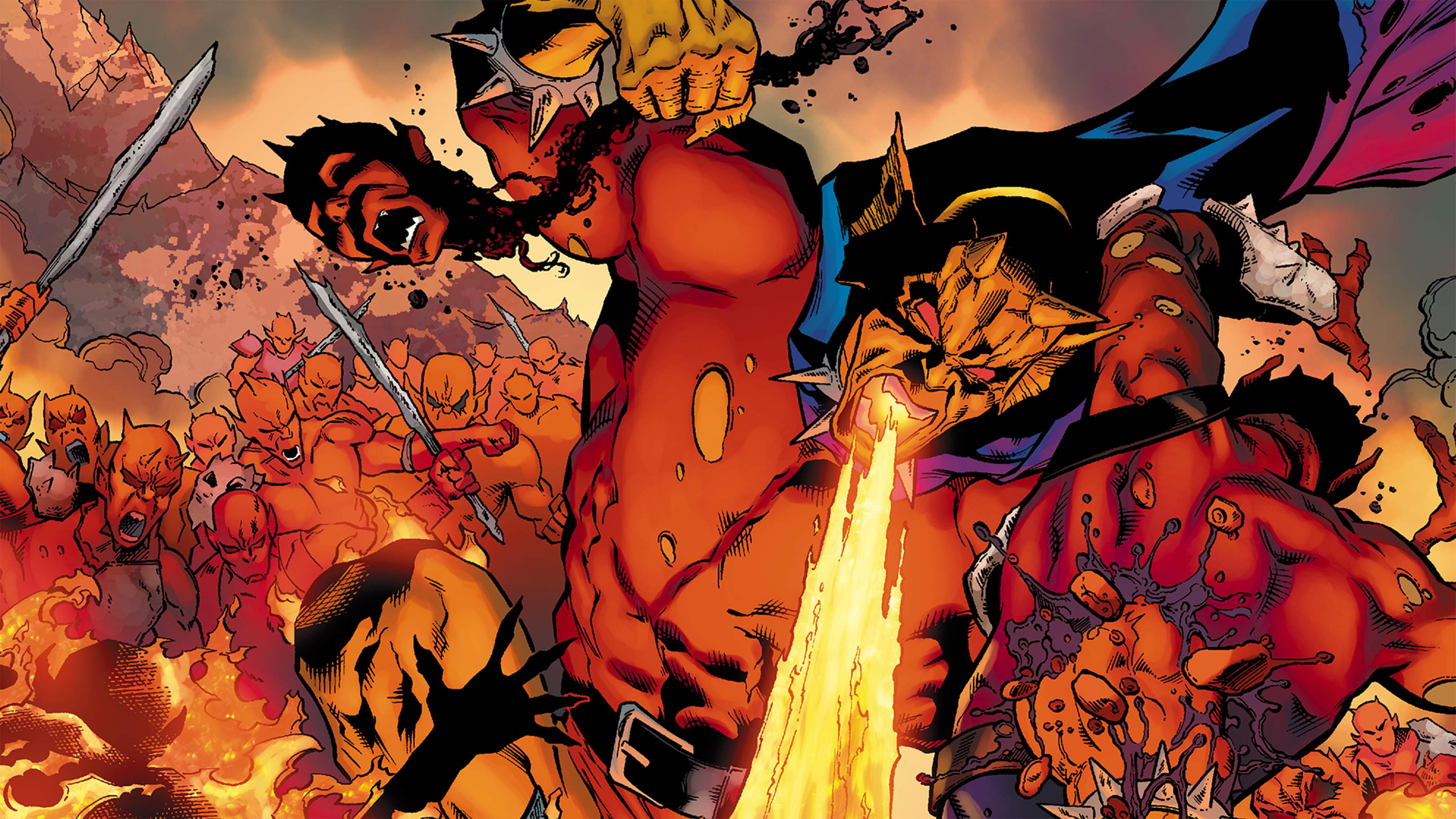 Change! Change! O form of man!
Free the prince forever damned!
Free the might from fleshy mire!
Boil the blood in the heart for fire!
Gone! Gone! O form of man...
And rise the demon Etrigan!

With this portentous rhyme, the immortal Jason Blood switches places in our realm with the hellbound Demon, AKA Etrigan — charged long ago by Merlin himself to fight against chaos magic, the supernaturally profane, and anything which stands as a threat to this world… though he often works for his own purposes, as well. Purposes which range from rising through the demonic ranks to become the sole ruler of Hell, to just spinning a choice verse. As a Rhyming Demon, Etrigan demonstrates his status and entertains himself by speaking in rhyme as his mood suits him. Through the years, these rhymes have ranged from silly, to ominous, to downright audacious. Collected here are some of our personal favorites.

In 2001, writer Kevin Smith told a story of resurrection and self-discovery by returning Oliver Queen to the land of the living after years of absence… though the mystery of “how” still lingered. Something wasn’t quite right with the Emerald Archer, and Ollie and his friends were determined to find out what it was. The first major hint was delivered by The Demon, whose rhyme lent this essential Green Arrow story its title — all while battling Green Arrow and Batman at once to reclaim Oliver’s profane existence.

Huzzah! Huzzah! O, fighting men!
Your battle can’t be won, but still…
You’ve proven sport beyond most’s ken,
Endeav’ring your triumph of the will.
But this futile labor you must now sever,
‘Gainst me, though yes, I’m known the fiend...
And afford this hellion’s duty a measure:
For mine’s a charge of import extreme.
To naked eye, dear sir, you’re whole,
But to Elohim’s eyes, you’re cause to shiver!
Have you not yet gleaned your unnatural role?
You’re not the archer, sir… 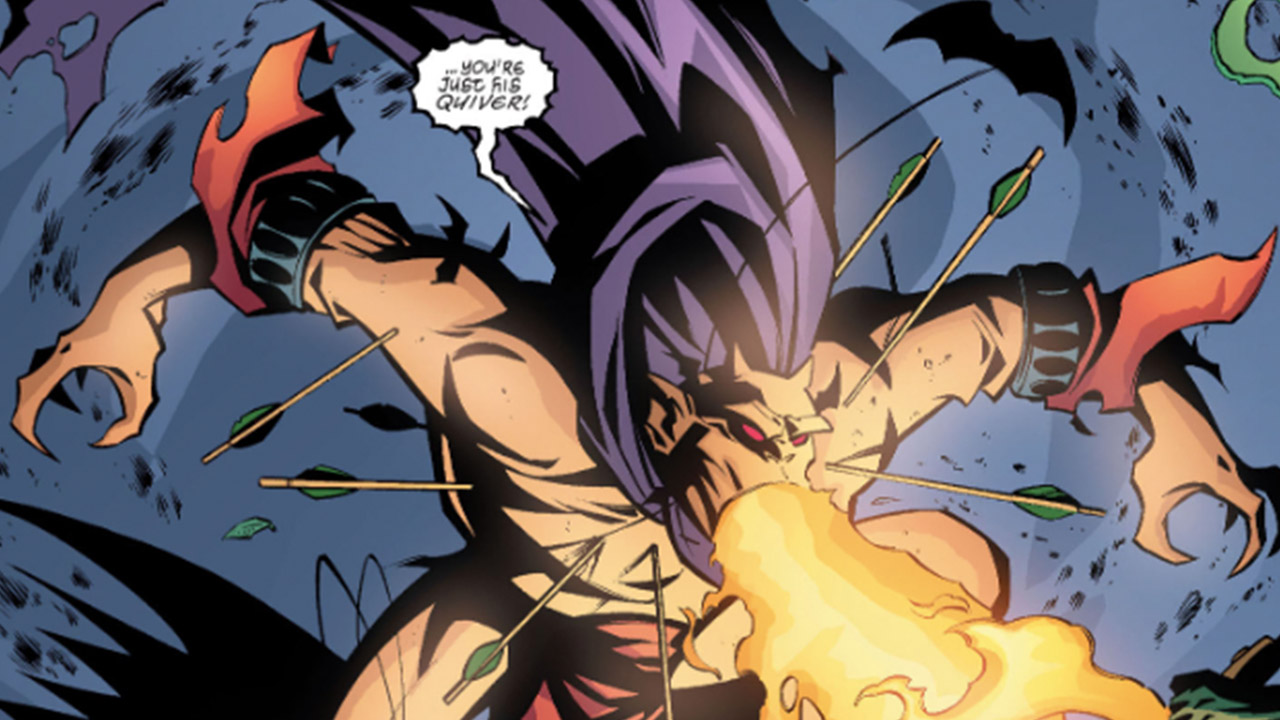 After the timeline is completely altered in the dystopian world of Flashpoint, nothing is as it should be… and yet, the folly of man is all too recognizable. As Barry Allen struggles to restore things to the way they once were, the monstrousness of war has not fundamentally changed. Cast as an unlikely freedom fighter in Justice League: The Flashpoint Paradox, it’s Etrigan who delivers the word on the fate that humanity has consigned itself to as the world tears itself apart in a single, mournful couplet:

Behold man’s final mad disgrace:
He chops his nose… to spite his face. 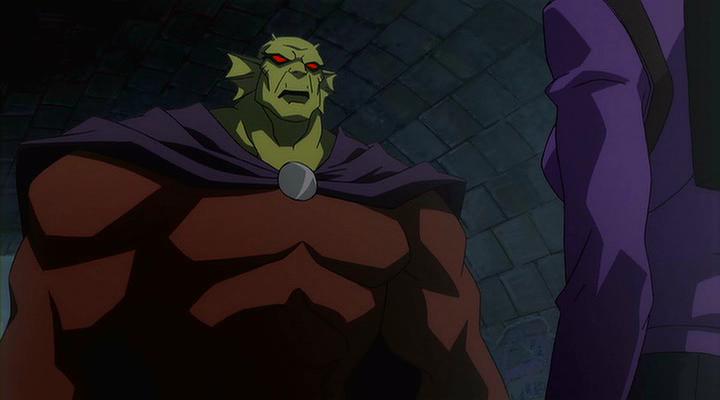 One of the most underrated event comics of the ‘90s, The Final Night presents a world plunged into darkness, struggling for each gasping breath of survival when the sun itself is eaten by a monstrous alien beast. As the world’s heroes scramble to somehow preserve the Earth and its people without this vital resource, Etrigan approaches humanity by taking over the airwaves with… a modest proposal.

SKTCCH--terrupt this--TTCH-KSH--ecial announcement!
Hello, people of the world!
I know you’ve been looking out your windows,
Asking, “What the Hell’s the game?”
We hear you. And while we’re not to blame…
My brethren and I have an offer just the same! 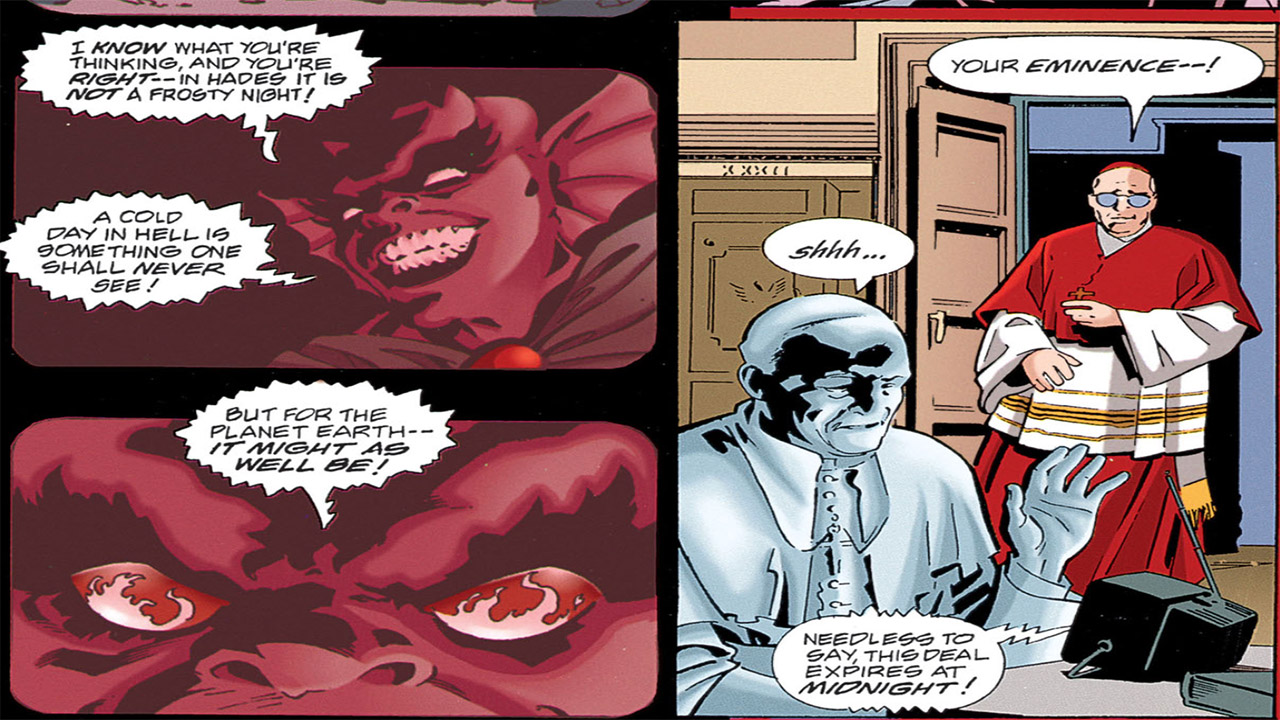 One of the most ambitious writers to take on Etrigan’s verse was Alan Moore, who did absolutely nothing in small measures during his tenure with DC. It was Moore himself who established the class of Rhyming Demons, providing a context for the penchant which The Demon had exercised since his debut under Jack Kirby. Some of the greatest rhymes of Etrigan’ career can be found in Alan Moore’s Swamp Thing run, any of which would be welcome on this list — but we’ll hit you with his first encounter with the Swamp Thing himself. Because if there’s one thing Etrigan loves more than rhyming, it’s making a big entrance.

So...
The toys about the nursery are set,
For idiot Chaos to arrange at whim.
He drools and ruins lives, his chin is wet
And old or young… it matters not to him.
The gracious lady and her root-choked beast
Have come to save the innocents from harm,
To spare them from the monkey’s dreadful feast.
What noble souls they have! What faith! What charm!
And see! The children’s uproar brings to life
Their guardians: that most dedicated breed!
Yet she betrays her husband, he his wife,
Though both of them are kind to babes in need.
Should innocence be mollycoddled thus?
I fail to see the reason for the fuss.
I am the one who comes to cage the ape.
I pay no heed to youth or purity.
I’ll roast each fool that aids the beast’s escape,
And drink their health tonight in Purgat’ry!
Innocents? Why, to hear the tales they tell…
You’d think there was no guilty child in Hell!
Feast, Jack-An-Ape! Eat hearty while you can… 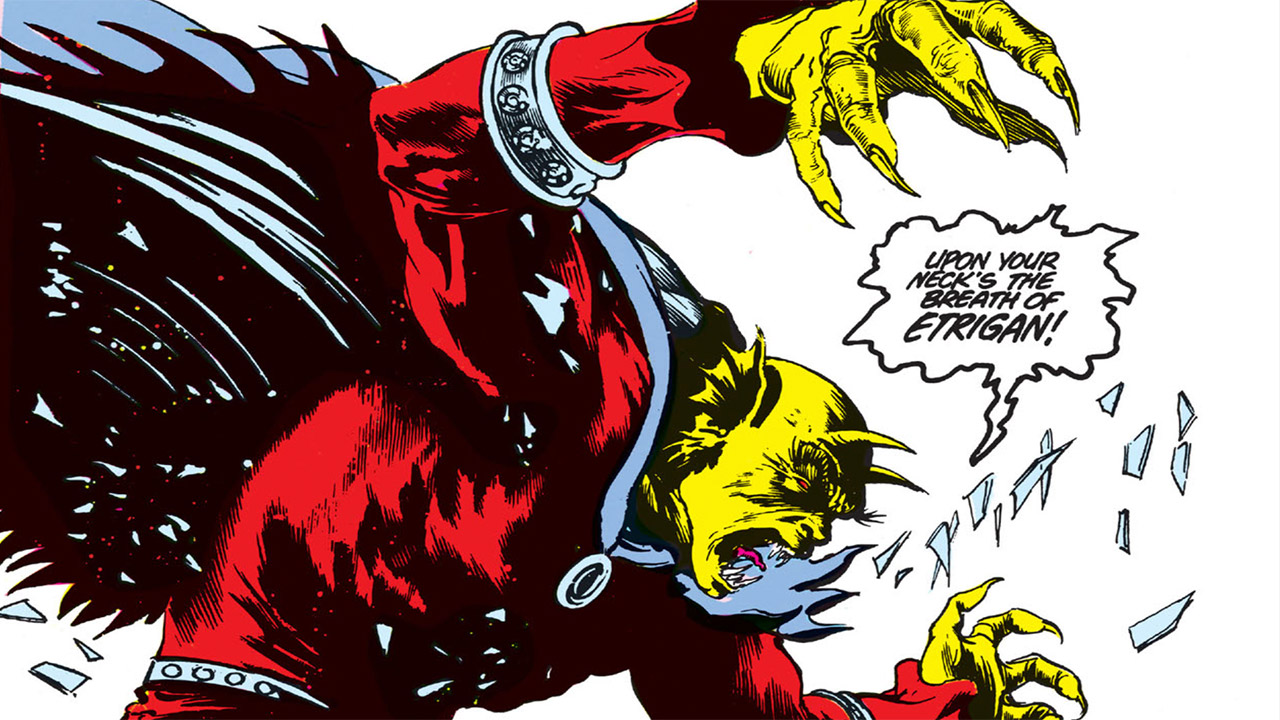 One of the most celebrated Etrigan writers of all time is the often painfully irreverent Garth Ennis, who took the character on a hellaciously hilarious joyride through the 1990s. So when Ennis returned to the DC Universe for the Hitman spinoff series All-Star Section Eight, checking in on his essential take on Etrigan was an absolute must. In typical Ennis fashion, it’s through Etrigan’s verse that the writer laments the state of his legacy some twenty years later… by laying it down with The Phantom Stranger. 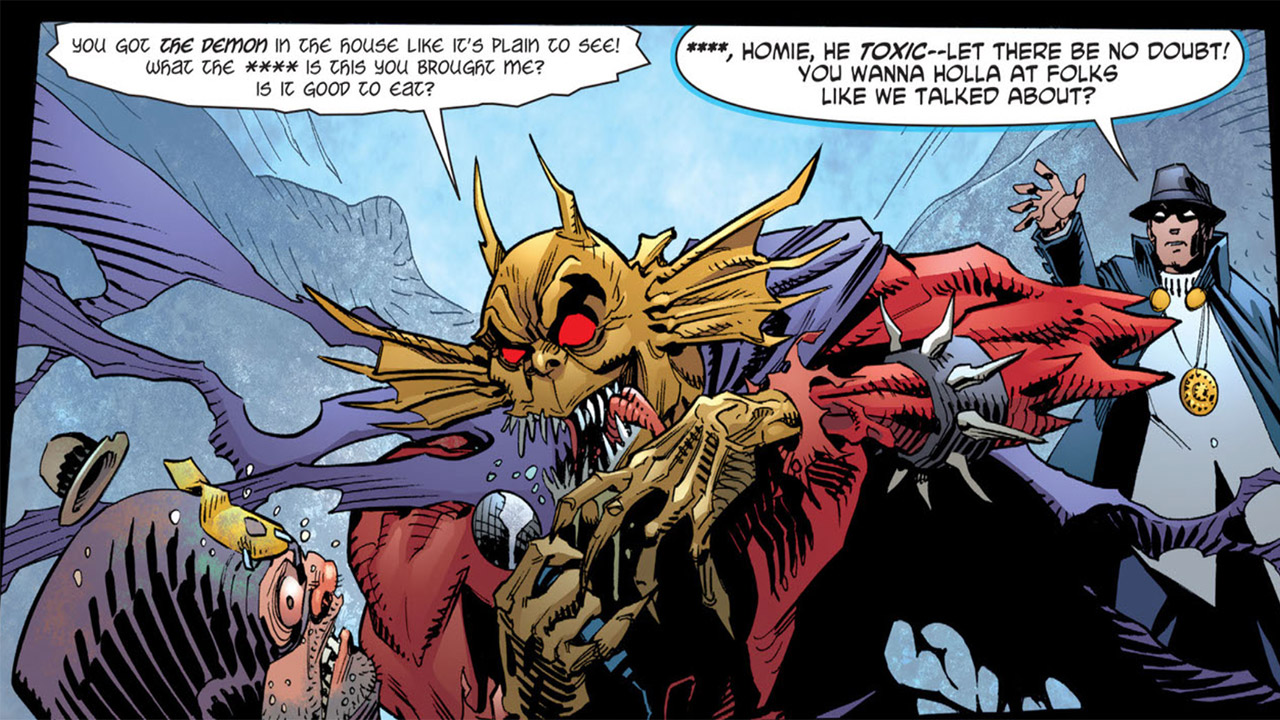 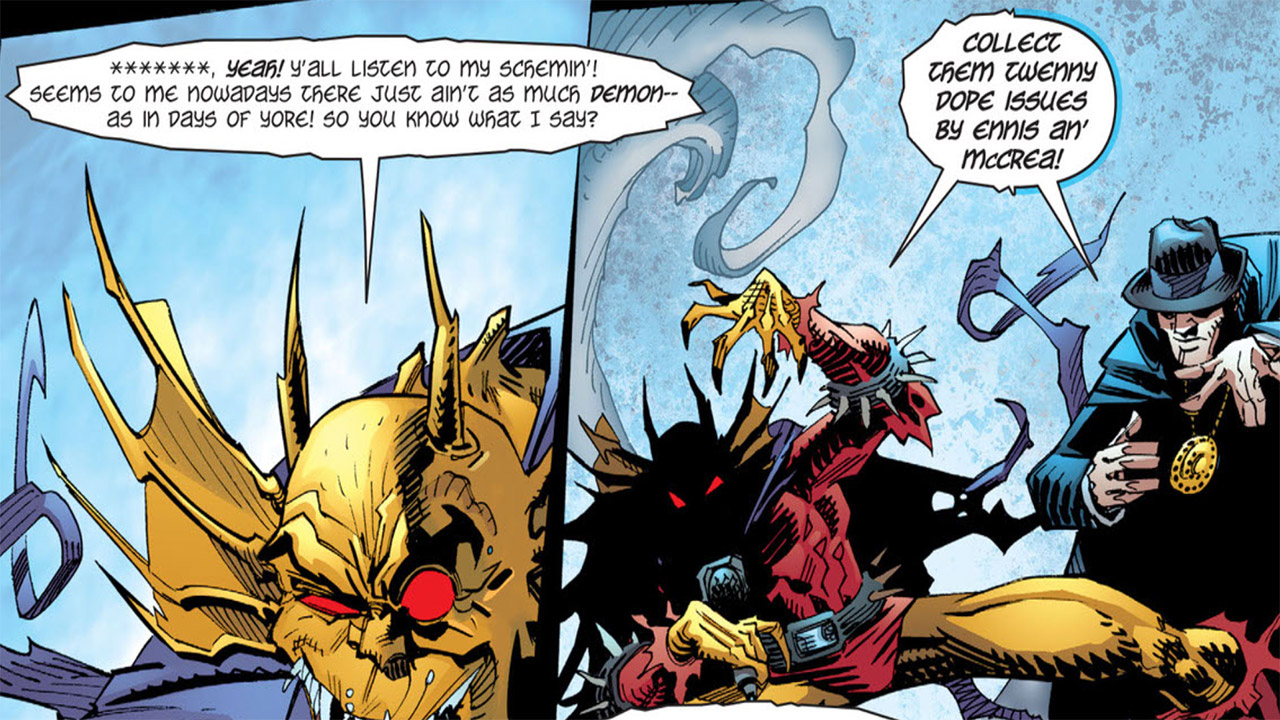 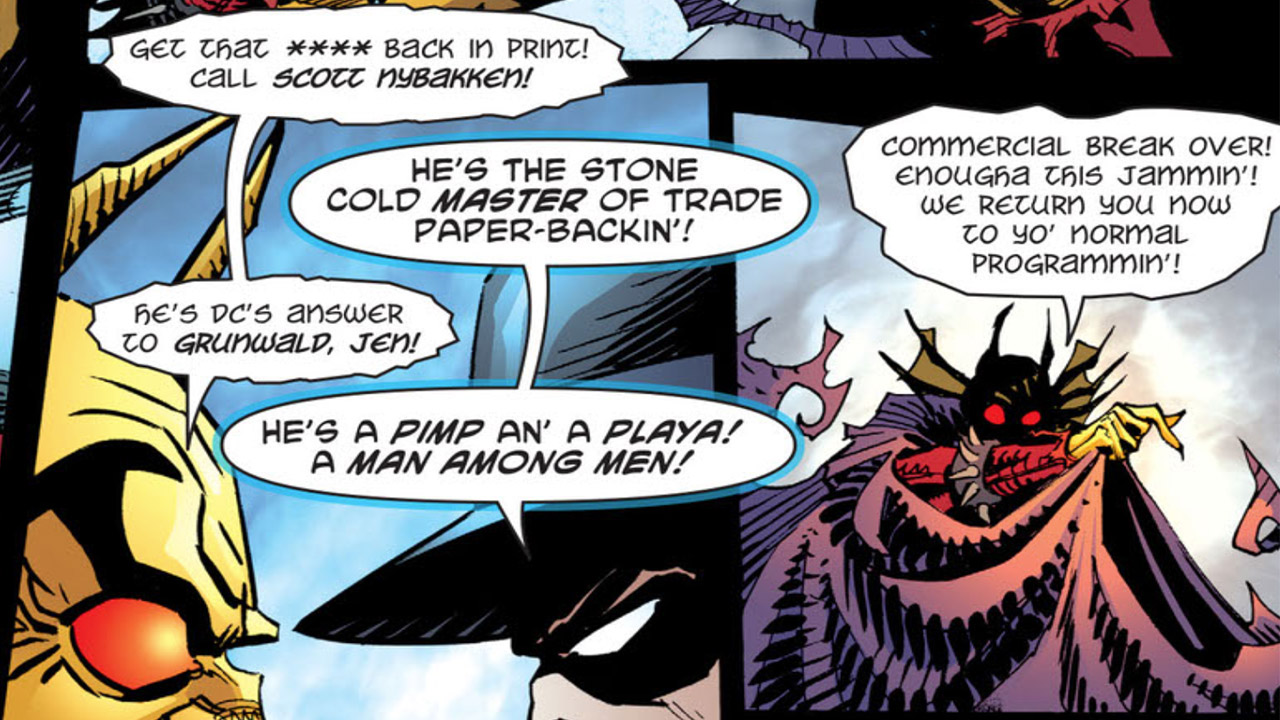 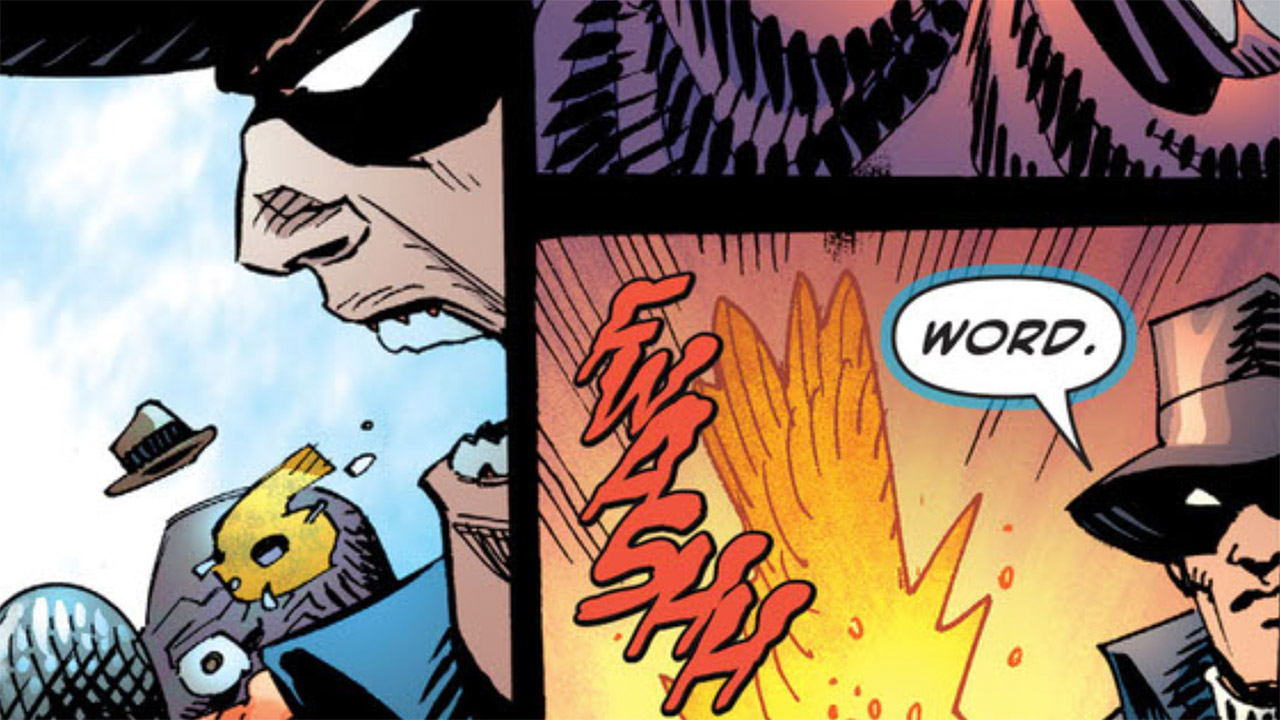 Are you a fan of Etrigan the Demon? Let us know in our Community!