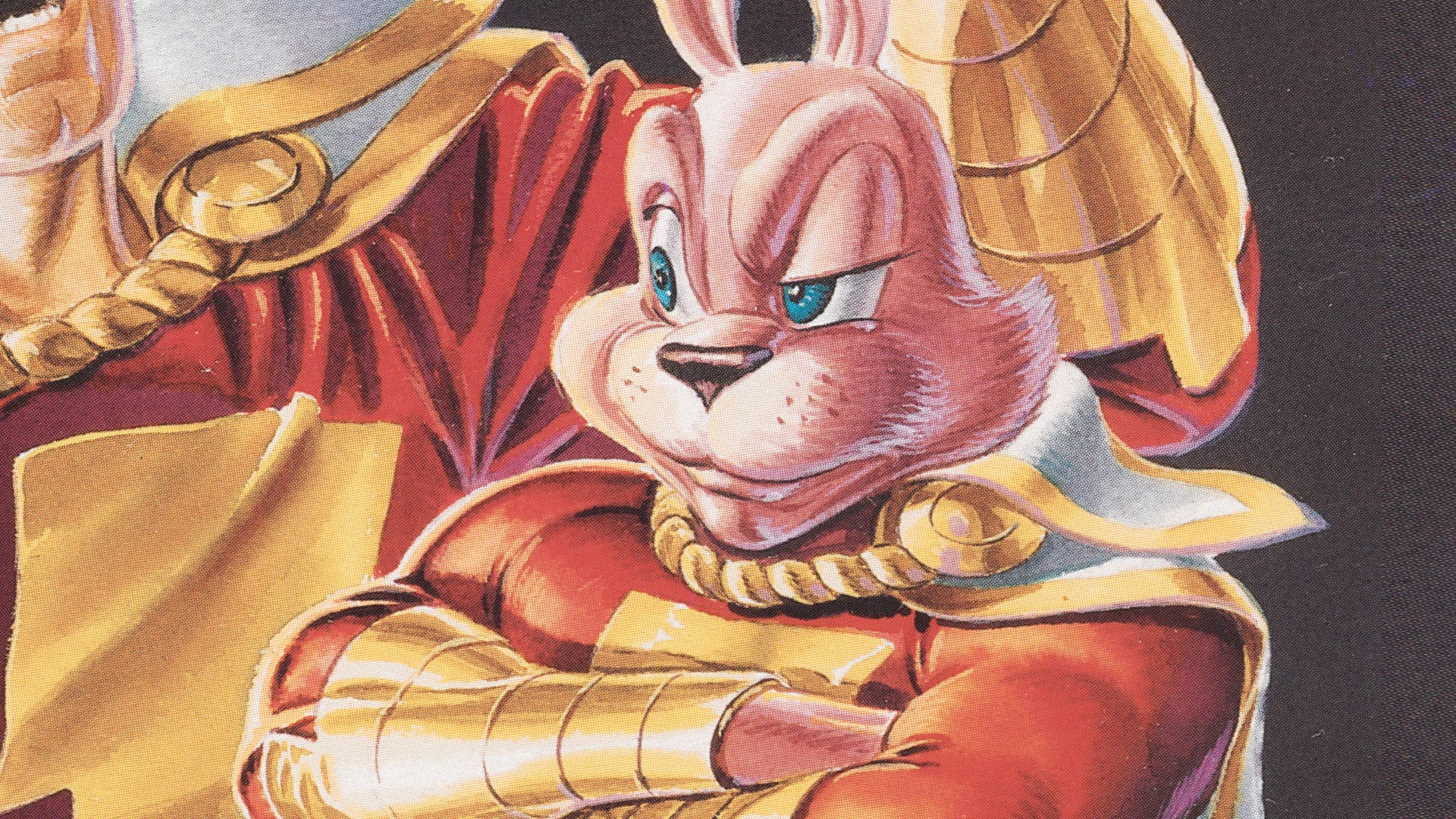 Some Bunny to Love: Meet Hoppy the Marvel Bunny

It’s time to hop down the bunny trail, because Easter is almost here. While some of you might be preparing for the arrival of the Easter Bunny, here at DC Universe we stan a different sort of rabbit. Hoppy the Marvel Bunny may not deliver candy during the holidays, but he’s the mightiest hare this side of Albuquerque. If you’re not familiar with the greatness of Hoppy, then let this bunny-biography bring you up to speed!

The year was 1942, and Captain Marvel was a big success for Fawcett Comics. Funny animal books were a large market at the time, so Fawcett’s next series was appropriately titled…well…Fawcett’s Funny Animals. The series starred a bunch of anthropomorphic woodland critters, including two bunnies named Hoppy and Millie. Hoppy was introduced in Fawcett’s Funny Animals #1 (illustrated by Chad Grothkopf) and his sweet little hare heart belonged to Millie, but she didn’t care for Hoppy because he was a weakling. That’s right readers, despite their reproductive reputation, rabbits have romance problems just like we do.

One day, as Hoppy was bemoaning his weakling status, an idea came to him while reading a Captain Marvel comic. If Billy Batson could shout the magic word “SHAZAM” and transform into the powerful Captain Marvel, then maybe Hoppy should give it a try. Amazingly, it worked, and Hoppy was transformed into the muscular Marvel Bunny. As far as superhero origins go, it’s not the craziest one we’ve heard.

The origin story takes an unexpectedly alarming turn when a fleet of Nazi soldiers (appearing as anthropomorphic animals) invade the forest and enslave the woodland creatures. Hoppy transforms into the Marvel Bunny and stops the Nazis. He then puts the Third Reich troops into a meat grinder, where they turned into sentient pieces of food. Yeah, the Golden Age was hardcore. But hey, Nazis are Nazis.

The adventures continued with Fawcett’s Funny Animals following some of the traditional superhero tropes. Millie adored Marvel Bunny, but she looked down on Hoppy, unaware that they were the same hare. Later stories expanded on the Marvel Bunny mythology, revealing that when Hoppy said “SHAZAM” he drew upon the power of Salamander, Hogules, Antlers, Zebrues, Abalone, and Monkury. Fawcett’s Funny Animals #30 revealed that the Bunny Wizard had given Hoppy his special abilities, making his origin story slightly less random. If you’re a multiverse nut, official DC indexes place these stories on Earth C-Plus.

The Marvel Bunny was a hit, and Fawcett gave him his own spin-off series titled Hoppy the Marvel Bunny. By the early 1950s the comic industry was changing. Superheroes were not as popular, and although Hoppy continued to be featured in Fawcett’s Funny Animals, he was portrayed as a normal rabbit and his superhero career as the Marvel Bunny was ignored and forgotten. In 1953 Fawcett stopped publishing comics, and sold some of their characters to Charlton Comics. Charlton began publishing new Hoppy stories, and reprinted some of his earlier Marvel Bunny adventures. The reprints were edited to make them copyright friendly, with Marvel Bunny being renamed Magic Bunny, the costume being edited, and the magic word being renamed “ALIZAM.”

If you think that Hoppy was too silly of a concept for DC to continue after Crisis on Infinite Earths, then you’re wrong. Hoppy was TOO AWESOME of a concept to ignore! Hoppy’s Post-Crisis counterpart was given a hare-larious introduction in The Power of Shazam #29. An evil magician named Carlini was able to access another dimension populated by anthropomorphic bunnies, and used his hat as a gateway. Hoppy, Millie, and their animal friends lived in fear of their ears being violently grabbed, and being subjected to humiliation in Carlini’s magic shows. 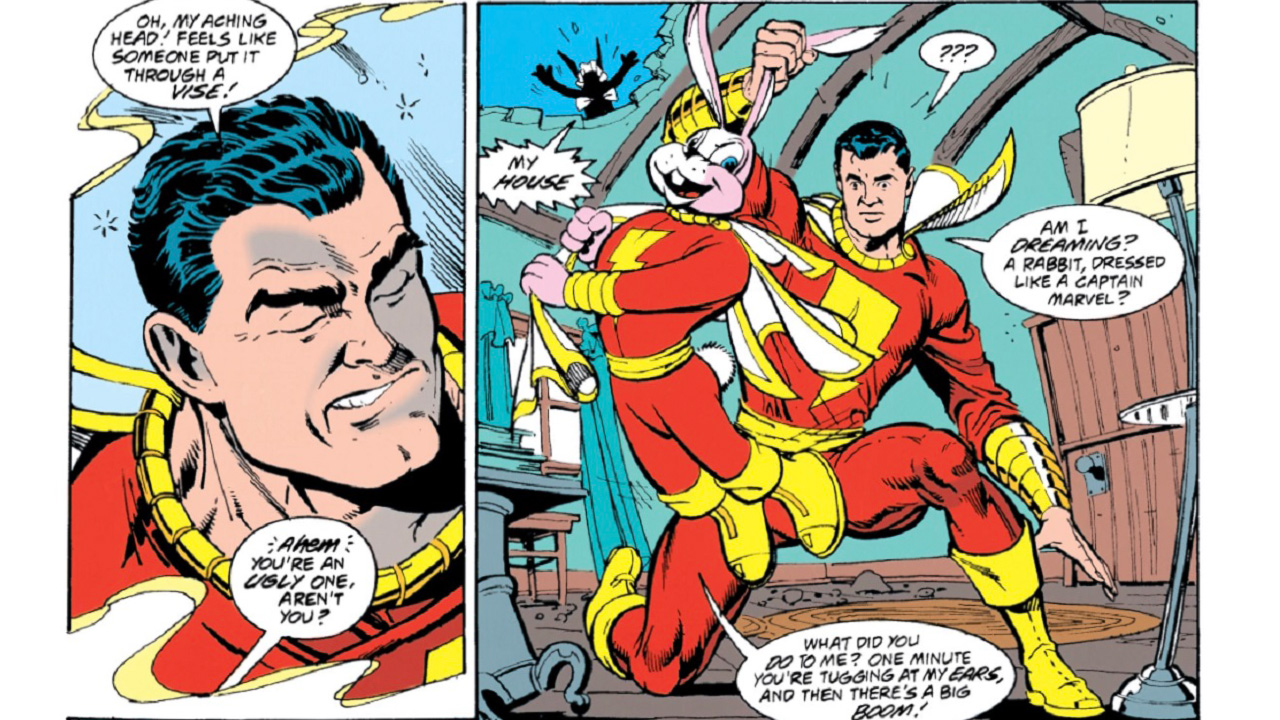 Captain Marvel wound up inside the bunny dimension, where he and Marvel Bunny teamed up to stop Carlini’s reign of terror. Hoppy made sure all of his bunny friends were safe, and he earned the respect of Captain Marvel. Although Hoppy’s comeback didn’t lead to a larger presence in the DC Universe, he did enjoy a series of fun cameos in stories like Superman and Batman: World’s Funnest and Tiny Titans. Hoppy had a fun “post-credits” scene in Tiny Titans #15, which was a fun bunny-themed issue. You can’t keep a good hare down, as the Marvel Bunny proved when he made encore appearances in Tiny Titans #21, #37, and Tiny Titans: Return to the Treehouse #3. If you’re a pet lover who needs their heart warmed, we’d recommend these stories for a good pick me up. How can anyone be in a bad mood seeing Hoppy snuggle up with the other Super Pets. I wonder if he’s dreaming about putting Nazis into a meat grinder. 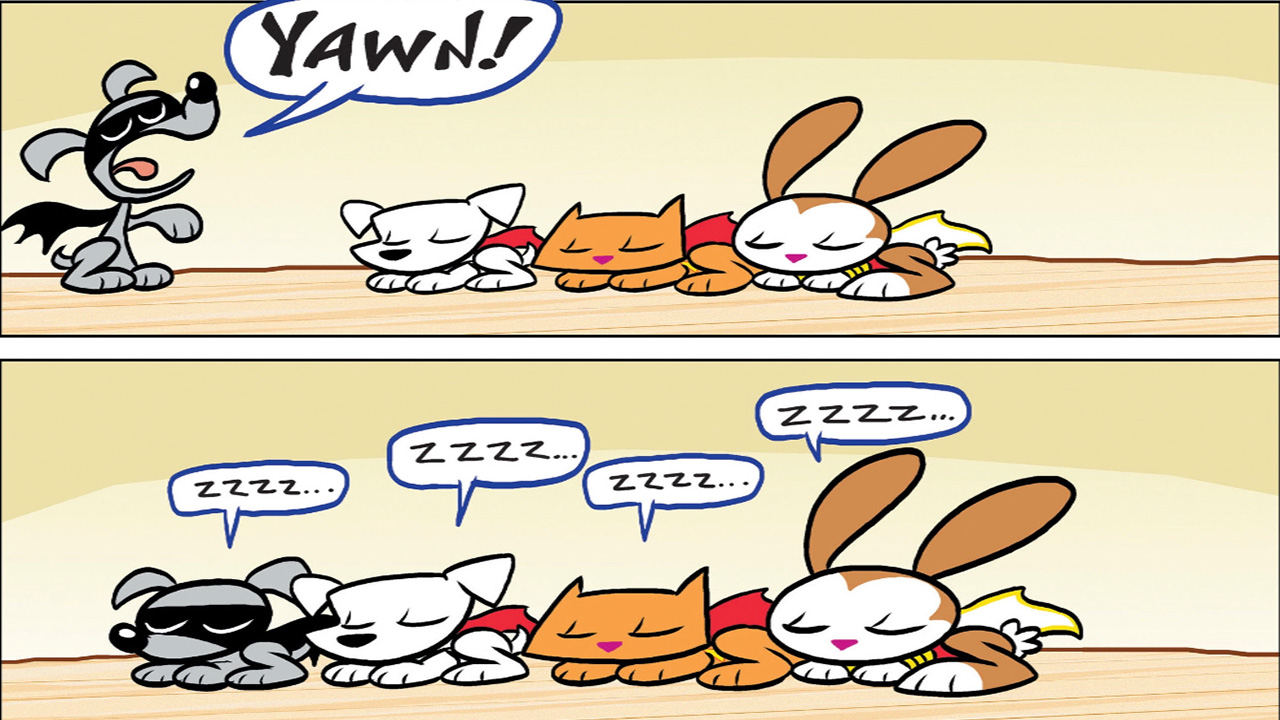 DC has had a few continuity shifts over the years, but Hoppy has always survived! When the legend of Shazam was reimagined for DC’s New 52, Hoppy was reintroduced as Mary Broomfield’s pet rabbit in 2012’s Justice League #8. Don’t despair, our lovable Hoppy hasn’t been downgraded to a mere house pet. In 2018’s Shazam #1, Mary stands too close to Hoppy’s cage as she transforms into Lady Shazam, causing Hoppy to absorb some of her lightning.

The Marvel Bunny is reborn, as he leaves his cage and takes flight to the skies in search of adventure. Over the years we’ve met many rabbits, from the Easter Bunny to Bugs Bunny, but it’s hard to imagine one with a resume as amazing as Hoppy. He defeated Nazis in his first appearance, he’s been a part of three different comic book companies, and he’s one of the only funny animal characters to survive multiple reboots. May his legacy be long, and his hops be high.

Do you stan an awesome bunny? Sing Hoppy’s praises in our Community!