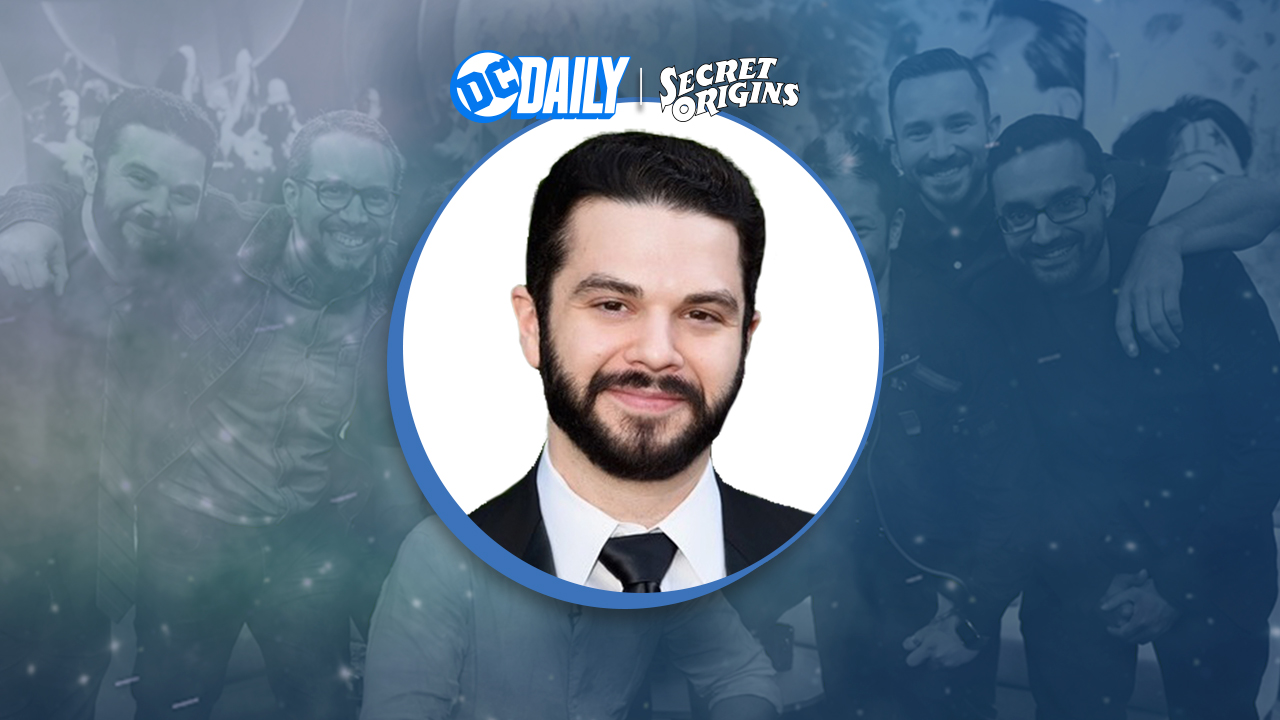 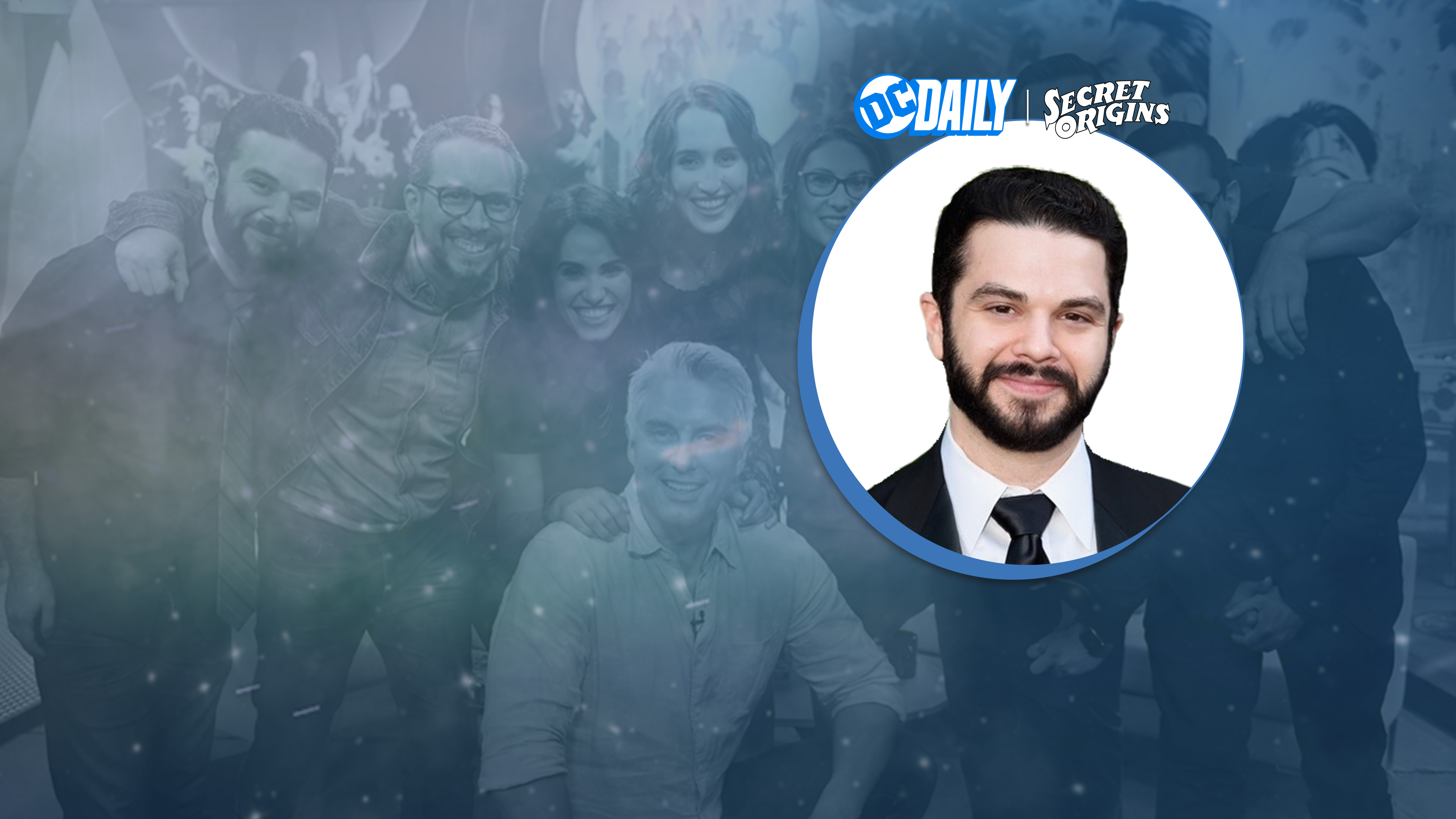 In Secret Origins of the 'DC Daily' Cast, we're delving into the lifelong fandom of your favorite 'DC Daily' hosts, from their first comic book memory to their biggest comic book crush. If you want to submit a question for our next cast member interview, be sure to visit our Community! Today it's our very own Freak and Geek, Samm Levine. The comic book lover, actor, ultimate DC fan, and the biggest Batman stan this side of Gotham sat down with us to discuss everyrthing from the Dark Knight to his love for Elasti-Woman! 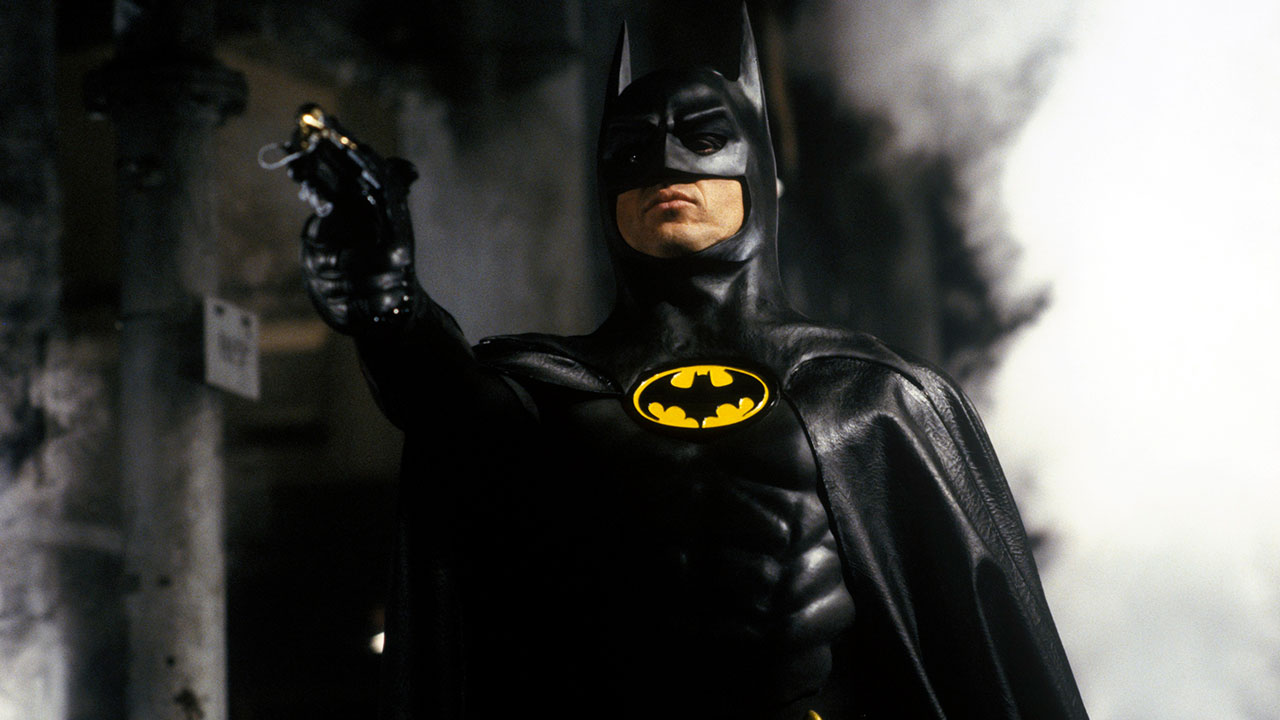 When I fell in love with the DC Universe was 1989's 'Batman.' My father, my brother, and I went to go see that opening weekend. You know, I'd never seen a comic book movie before. I'd never even read a comic book before that. I vaguely knew they existed, but when we saw that movie, I was blown away. Then my dad said, "You know, I think I maybe even have some old comics or something at home if you want to look at them." I was like, "Yeah, yeah, I'd love to." So I read 'The Dark Knight Returns' and some more of my dad's old stuff and I was hooked.

This one is not that hard. It's always been Batman for me, for so many reasons. The reason I think Batman is such a memorable, successful beloved character is that every person, man, woman, and child at some point thinks to themselves, "I could be Batman." The only thing separating me from being Batman is having cool toys, being in great shape, and being a billionaire. But those things aside, Batman and I are like the same person. We've all had a night where you see the worst of society and you think to yourself, "I should be out walking the streets protecting people. I should do it and I could do it." That's why I think people can identify with Batman.

It's actually so underrated I couldn't find it online. I couldn't find it on DC Universe and I couldn't find it on Comixology. It was a four-issue run of a series called 'Gotham Nights' and that's not knight with a K, just regular old night. I unfortunately can't tell you much about this series. I just remember reading it and it was four issues. I remember I had to wait for what felt like a friggin' eternity between issues. But I do remember, specifically, that this was the first time I'd read anything that was about Gotham but that wasn't focused on Batman. 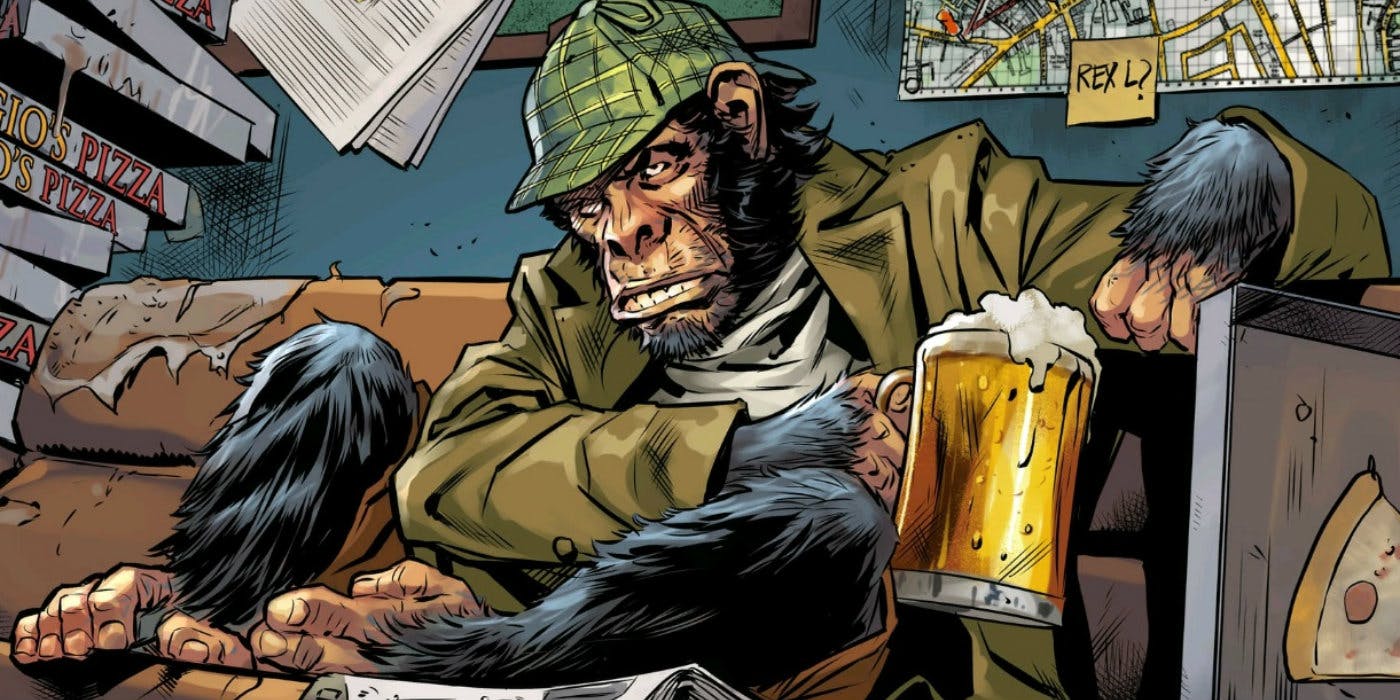 I thought long about this one. There are so many characters. And when I look in the mirror and I think of myself as a DC character, from top to bottom, it's Detective Chimp.

It's Superman. Batman is also a great choice because he has a cowl. Superman does not. But in terms of iconic for me, I remember the blue suit, the red underwear on the outside, just the whole thing. I've found old pictures of my friend's brother from when we're like three or four years old in Superman pajamas, complete with velcro attached capes. Here's the big difference: When I think about the Batman costume, I think about how it's meant to strike fear in the hearts of those who would do bad things. When I think of the Superman costume, I think of him standing there in the costume on top of a building. I think of hope. You know, like Batman is there to protect the best of us from the worst of us. Superman is there to inspire us to be the best that we can be.

So when I think of Batman, for me I have to admit that I think of the very first Batman I ever saw and that's Michael Keaton as Batman. So for me, out of all of the other Batmen after that--even ones that were written before it, even Adam West--I compare them to Michael Keaton Batman. 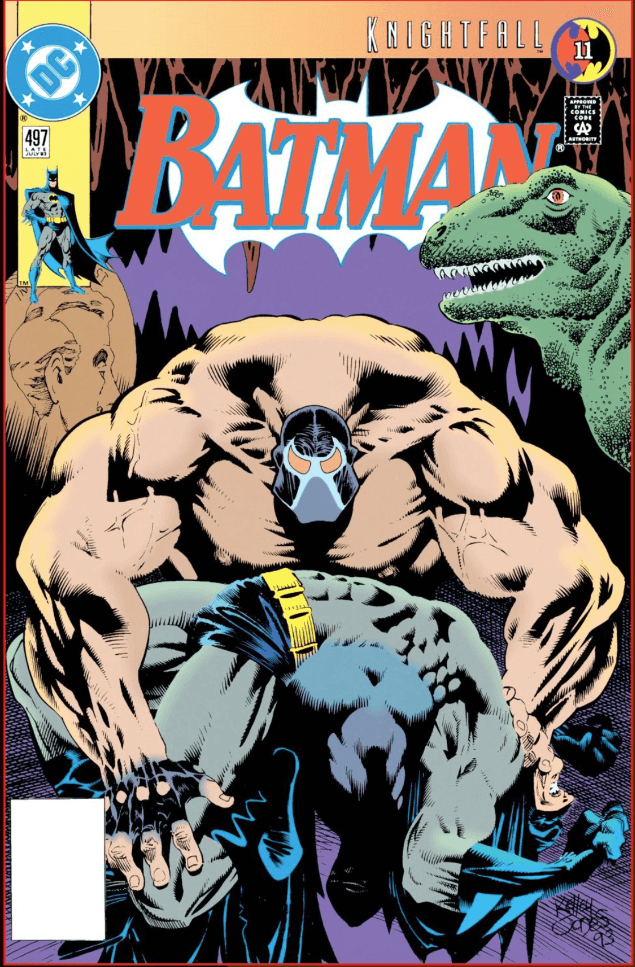 'Batman' #497, The Breaking of the Batman. That was from the "Knightfall" run. That's the one that has Bane breaking Batman over his knee and the fallout ran for like a year. I remember in my childhood that felt like it took a decade. It was the worst thing that ever happened to Batman and it was right on the heels of the "Death of Superman." I remember thinking to myself--because you know, we didn't have the internet back then; I wasn't plugged in, I had no idea what I was going to read next--"Okay, they just killed Superman. They're not going to also kill Batman? Like they're not going to destroy everything I've known, right??"

I would go to the Riddler because I love a good puzzle. I have been known to spend an inordinate amount of time on puzzles.

So because I was so young when I got into it, I didn't have any money to spend, so I don't want to say a particular issue is my proudest possession. But I will say that for my eighth birthday I received the '89 'Batman' on VHS and I watched that thing to the end. I think my brother and I watched it so many times that we must've watched it 500 times together.

I always go with Batman. In fact, I did it most recently last Halloween on 'DC Daily.' I always forget once you put that cowl around your head that you can't hear anything. You can't move your neck. You can't hear anything. That was mostly like non-breathable polyester. And the studio we shoot in was pretty warm. I think I lost 10 pounds that day. I was in that suit for like four hours. I have no regrets though, because I got to be Batman for a few hours.

Out of the DC Universe, who is your ultimate comic book crush? 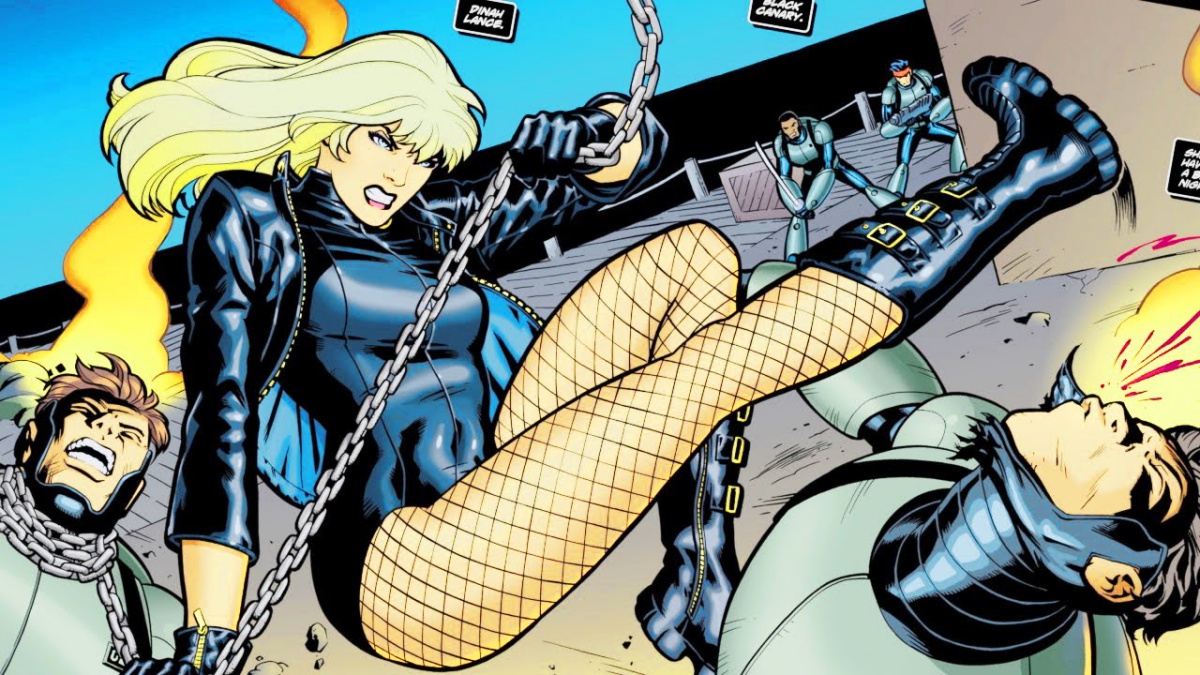 I have always had a thing for Black Canary. She's the ultimate babe. I would call her my ultimate DC crush from the page.

Because of what it means to me personally. I will say 'Batman' '89. However, if I had to rank them in terms of creativity, longevity, and what I think people will still be talking about 50 years from now, I think 'The Dark Knight' from Nolan is so exceptional. It's such a close second for 'Batman' '89 for me, I mean, what Heath Ledger did, what Christian Bale did, what all the supporting cast did, Aaron Eckhart, everyone in it, it's an absolute home run of a comic book movie for me.

This just focuses on the movies. My controversial opinion: Superman is too good for Lois. Yeah, that's right. You heard me! I think she is kind of petty. I don't want to say career-driven because that's not necessarily a negative. But I feel more often than not, Lois is not focused on the greater good. She's focused on herself and getting the story she wants to further her own career. 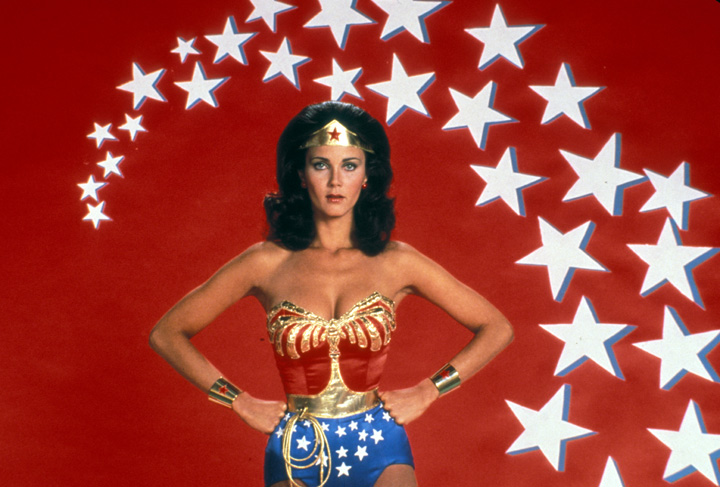 There are so many great things they have on the service right now. Obviously, they have the first few 'Batman' movies. Also gotta shout out 'Doom Patrol.' It is so, so, so good. 'Wonder Woman' with Lynda Carter. I used to watch reruns of that when I was a kid. And it's so great. It's so fun.

What's been your favorite moment on 'DC Daily' so far?

Well, as much as I loved getting to chat with my elasti-girlfriend April Bowlby, I think it was when I secretly snagged the actress who played Pinot Grigio Sally to do that Skype interview with me and then getting to surprise my fellow castmates with it. That was probably my favorite moment only because we all love that character. You know, we're writing Pinot Grigio Sally fanfic. We really loved taking that deep dive. That was that was probably my favorite moment so far.

This question comes from @biff_pow: Why do they make you sit on the end of the couch? Do you have aspirations to sit in the middle?

No, I specifically choose to sit on the end of the couch because it's a forced perspective thing. The deeper I sit into the couch, the tinier I look. Not that anyone in our cast is huge, but when you're my height you gotta do yourself every favor you can. I love sitting on the end there. And, also, old man Levine needs to have an armrest.

This question comes from @DeSade-acolyte: Ok Sam, gotta make the choice because vacillating will only lose both of them. Lynda Carter or your Elasti-girlfriend?

If I have a gun to my head, I would probably go with my Elasti-girlfriend over Lynda Carter.

@ChemtrailCommander asks, what do you think the future of print comics will be like?

I've thought about it because I certainly haven't bought a physical comic in years. I think for at least the next decade, we will still have printed comics. But I think physical printing of comics--like an issue, a single issue--it's going to be a rare thing. I think at that point, at least 10 years from now, tablets and e-readers will be so ubiquitous. You know, it'll be like having plumbing in your house: everyone will have them. So from a business standpoint, physical printing is just going to be such an outdated thing. It's just going to become so much more expensive. I would say by 2030, if you don't have any reader or a tablet or whatever versions we have 10 years from now, it's going to be really hard for you to get your hands on new comics.

Thanks to Samm Levine and all of our Community members who asked questions!