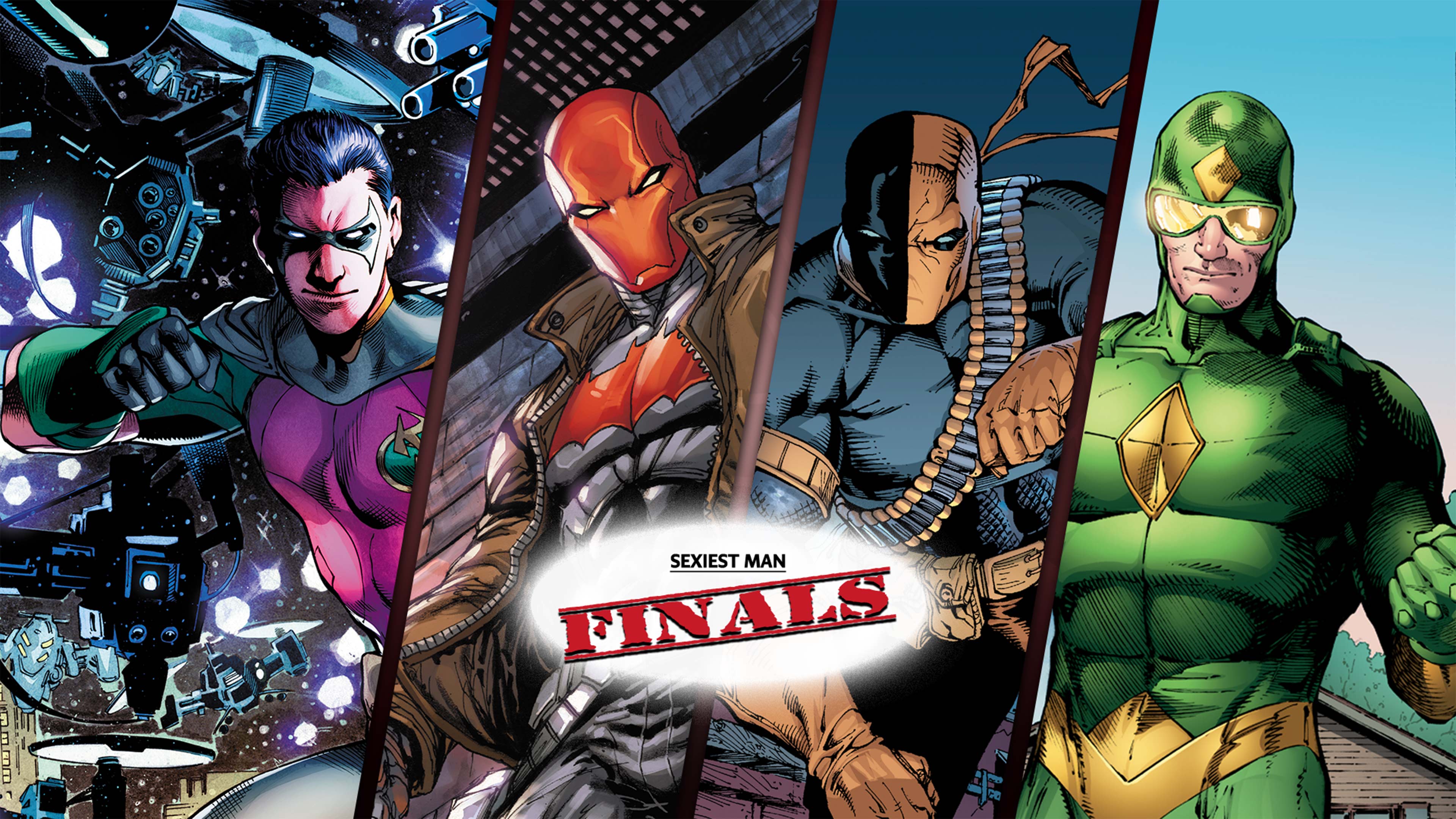 The Search for the Sexiest Man in the DC Universe: The Finals

February is the month of romance here at DC Universe, and as we enter its final week, the time has come to follow our hearts to our one truest love. After a well-earned sabbatical by perennial favorite Dick Grayson, the most desirable pretty boys, hunks, and daddies have all been vying for the prestigious title of Sexiest Man in the DC Universe. We’ve been presenting this year’s eligible crop to you week by week for your objective judgment, and the results are in: from the Pretty Boys bracket, your favorite is the ravishing Red Robin we know as Tim Drake. From the hoard of hunks, you overwhelmingly chose Jason Todd, the sexiest man to ever don the Red Hood (unless you’re Harley Quinn). And from DC’s dreamy daddies, your selection was… Deathstroke the Terminator? Well, okay. We’re not here to yuck any yums.

But rounding out the cast for our final bracket will be one wild card slot, chosen off-menu by our collective Community from the available bachelors who didn’t make the initial roster. Let’s take a deeper look at each of our finalists. 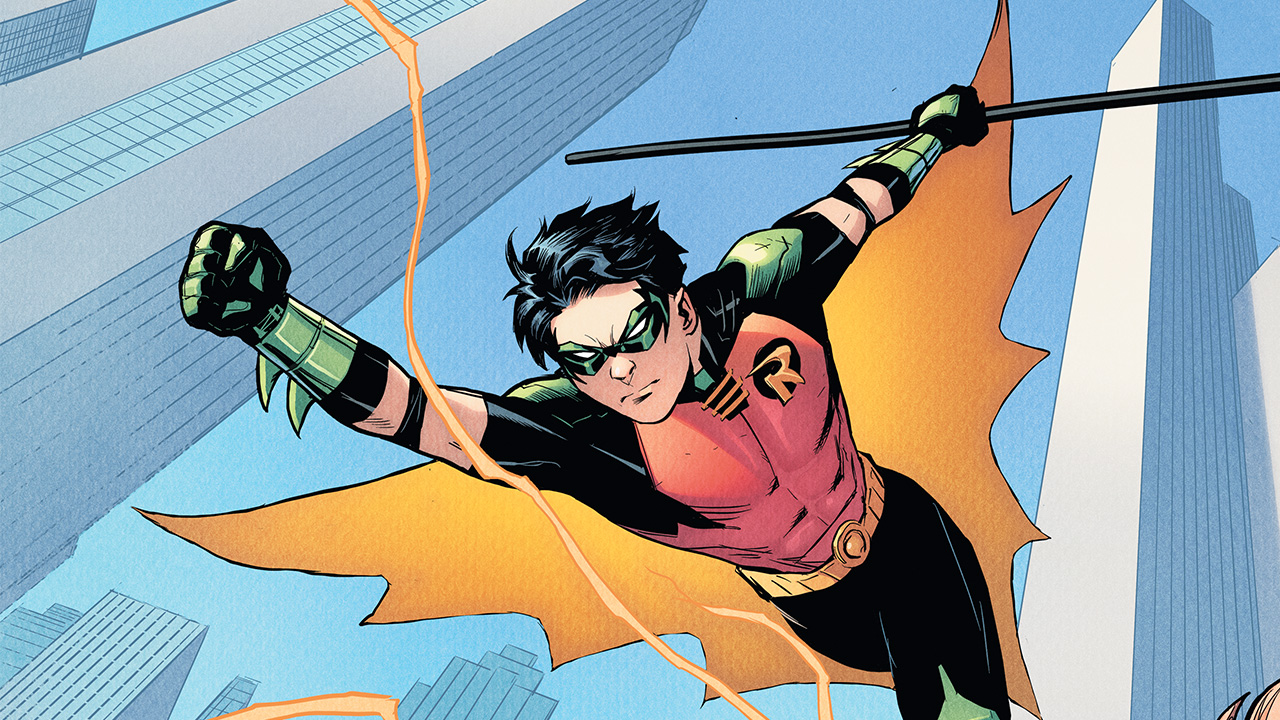 Everybody loves The Drake! After what has indisputably been the most heated head-to-head contest in the competition this year, Batman’s third Boy Wonder just barely edged out the Metropolis Kid, Conner Kent. As the most intellectual of the bunch, Tim Drake has a sort of “adorkable” charm to him which cannot be denied. He’s also our editor’s personal favorite, though he swears that this vote was in no way rigged. Sure, Dixon. [This isn't Florida, Jaffe. Our voting is above board here. - Ed.]

FIRST DATE: Catch a midnight release of the latest Space Trek 2020 reboot, followed by delicious smoothies up on a rooftop.

BOXERS OR BRIEFS?: Briefs. Some parts of the Robin lifestyle never change. 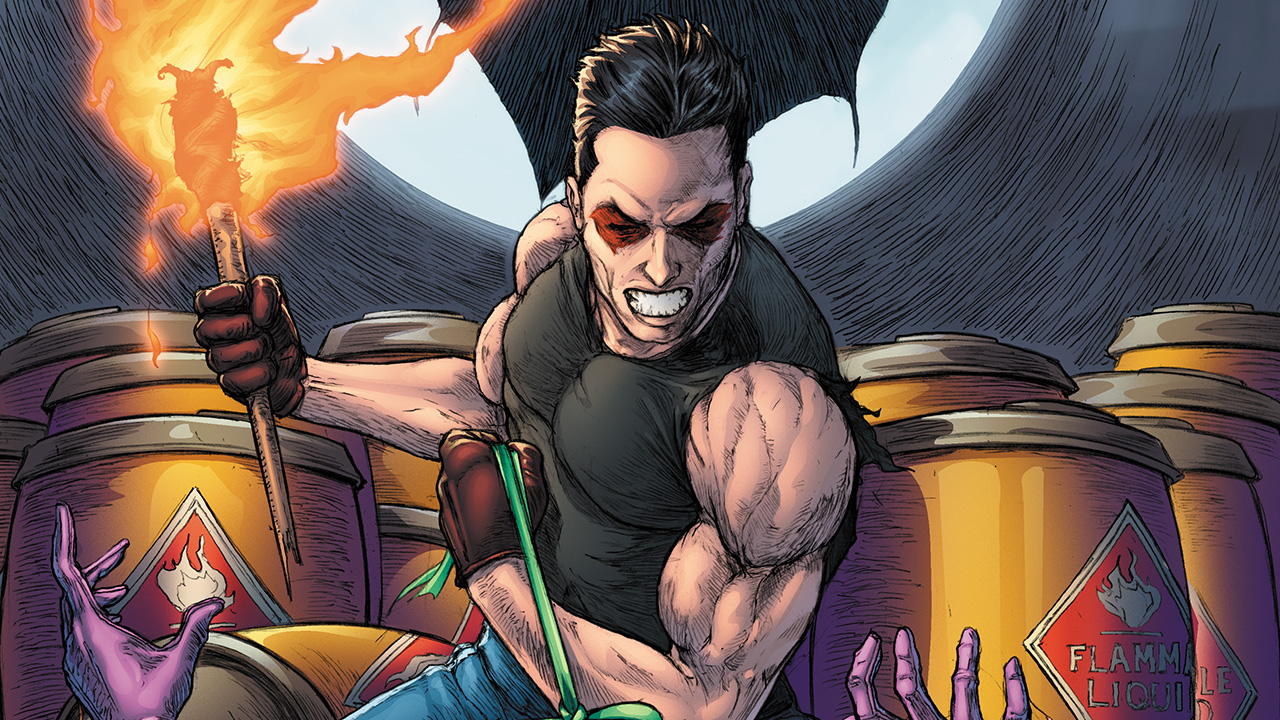 “Let me show you the REAL Gotham City.”

Red Hood ‘til we rot! After completely dominating the Hunks category, the bad boy of the Batcave is back to ride his way into your heart. Rumor has it that champion-in-exile Dick submitted the brooding Jason’s name into this contest as a joke, but he’s really in it to win it now. And once the most stubborn of Robins has a goal in mind, not even Batman can keep him from pursuing it to the lovin’ end.

FIRST DATE: How about a motorcycle tour of Gotham, from the kid who knows it best? Start out with a nice dinner at Gotham on the Green, then enjoy a punk rock concert in The Cauldron and a drive around the waterfront. If you're lucky, maybe he'll even sneak you into the Batcave before the date inevitably gets derailed by some type of super-villain attack. Maybe Mad Hatter? It is almost March.

BOXERS OR BRIEFS?: To his great shame and embarrassment, also briefs. 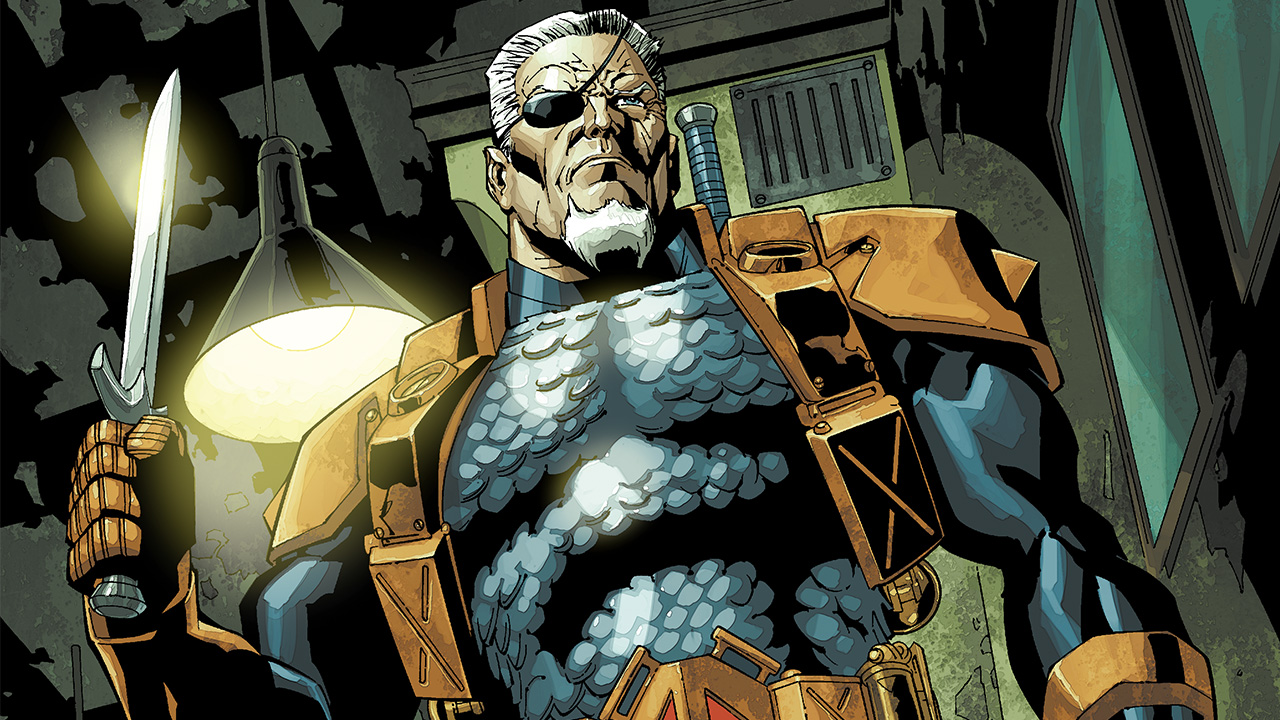 All of us are confused how Deathstroke the Terminator, the world’s deadliest assassin, ended up in this contest. We’re even MORE confused that he was able to get this far, beating out clear favorites in the Daddies bracket like Swamp Thing. (Well, our favorite, anyway.) But maybe it’s the danger of Deathstroke that makes him so attractive. There’s something morbidly exciting about being with a man who wouldn’t hesitate to use you as a human shield if the need arose. Just be advised that under that hard, unwelcoming exterior is only an even MORE deplorable bastard.

FIRST DATE: The two of you take a glamorous private jet to an exotic, foreign locale. He leaves you alone in the five star hotel suite and goes to assassinate someone. He does not return until 2:00 AM, at which point he falls asleep covered in cuts and bruises, bleeding all over the good linens. He’ll look fine in the morning.

BOXERS OR BRIEFS?: Boxers. He’s not a child.

And now, the moment you’ve been waiting for. It’s time to unveil our breakout dark horse contender -- wait, WHAT? Seriously? Well… if you say so. The DC Nation asked for it, and DC Universe delivers! 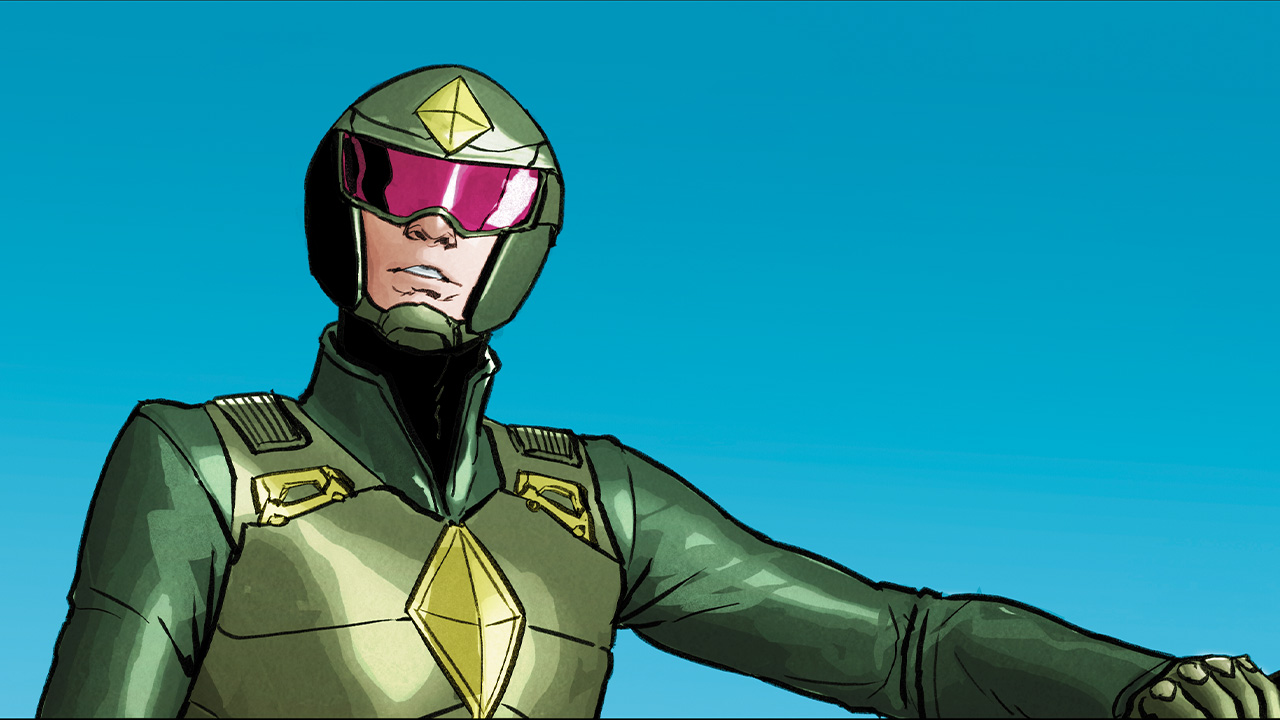 F-List Gotham City “super”-villain Charles Brown (yes, his actual name) doesn’t have much of an inspiring origin story. He bought a kite once, and decided he’d use it to commit crimes. Things have been looking pretty serious between him and Poison Ivy lately, but he’s looking to “branch out” (his joke, not ours) during Harley Quinn's five-week hiatus. We know he’s a goofus who loses his mind over the absolute lamest jokes, but he’s also proven himself to be a surprisingly caring, thoughtful, and attentive boyfriend who will always put you first. Will you say "Hell Yes" to this Hot Mess?

FIRST DATE: The two of you will fly kites together at Robinson Park, go out for a classic dinner/movie sesh, and then cap it off (weather permitting) with a breathtaking aerial kite ride over Gotham.

Only one of these strapping men can be the Sexiest Man in the DC Universe! Who will it be? That’s up to you, our inscrutable reading public! Now go forth and vote!

Who are you rooting for to take the Sexiest Man in the DC Universe crown? Vote now and talk about it in our Community!