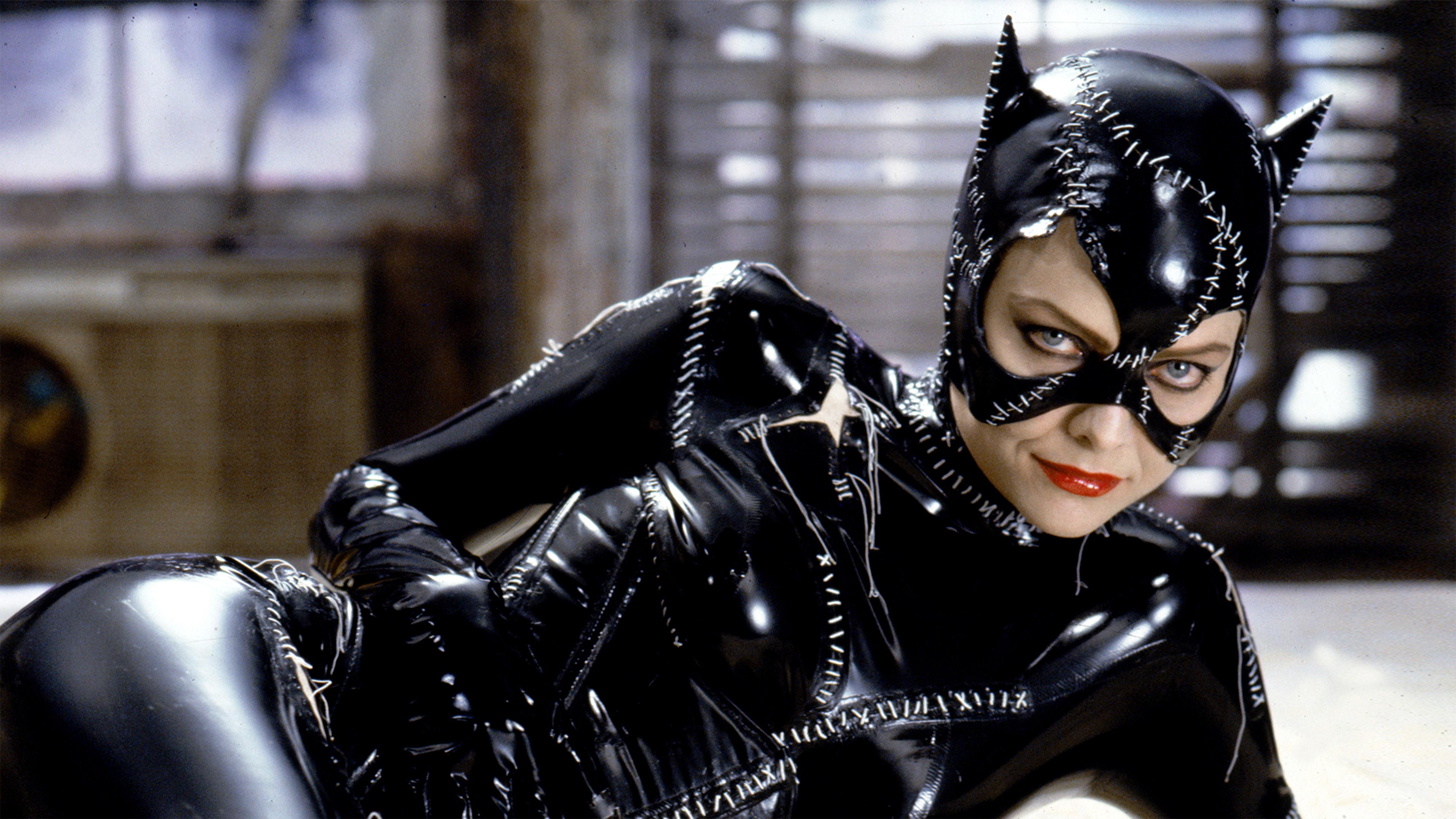 There’s no one quite like Selina Kyle, as evidenced by her long stretch of history. For 80 years, the feline fatale of Gotham City has had several aliases and even a few imitators, but none have replaced the memory of the screen's Catwomen. That's due in no small part to the many different actresses who've portrayed her in both live-action and animation. Yet those varied elements have managed to form a unified whole, as they've sculpted and refined her character over the decades. Let’s look at each major incarnation of Catwoman in her media history, and what they've contributed to this inconic character. 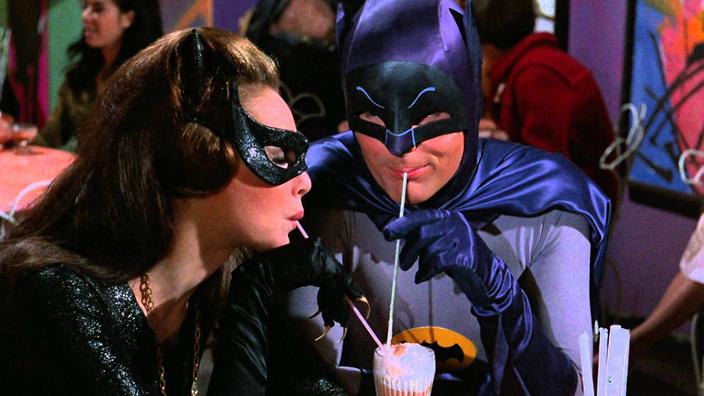 The first screen adaptation of Catwoman, the 1966's Adam West-starring Batman series saw actress Julie Newmar portray the Cat Crook as exactly that: a master thief with a penchant for felines and a real mean streak. Her first episode had her siccing live tigers on Batman and salting Robin for her pets’ dinner.

In season 2, however, much of Catwoman’s antipathy towards the Caped Crimefighter was born of unrequited love…or was it requited? Whereas subsequent animated adaptations in 1968 and 1977 saw Catwoman as a one-dimensional villain, this version presented the romantic tension between her and Batman as the key ingredient to their relationship, and not simply one of opposing sides of the law. This carried over into the 1966 movie, wherein Bruce Wayne falls for Catwoman’s civilian alias as Russian Journalist Kitka (this time played by Lee Meriwether) only to be devasted upon learning of her alter ego. While the love affair was toned down in the third season with Eartha Kitt – who brought to the role her famous rolling Rs, which defined Catwoman’s seductive diction – her feelings for Batman were a major part of this incarnation, such that it was reworked in Batman: Brave and the Bold, as well as the animated film Batman: Return of the Caped Crusaders, with Julie Newmar reprising the role. 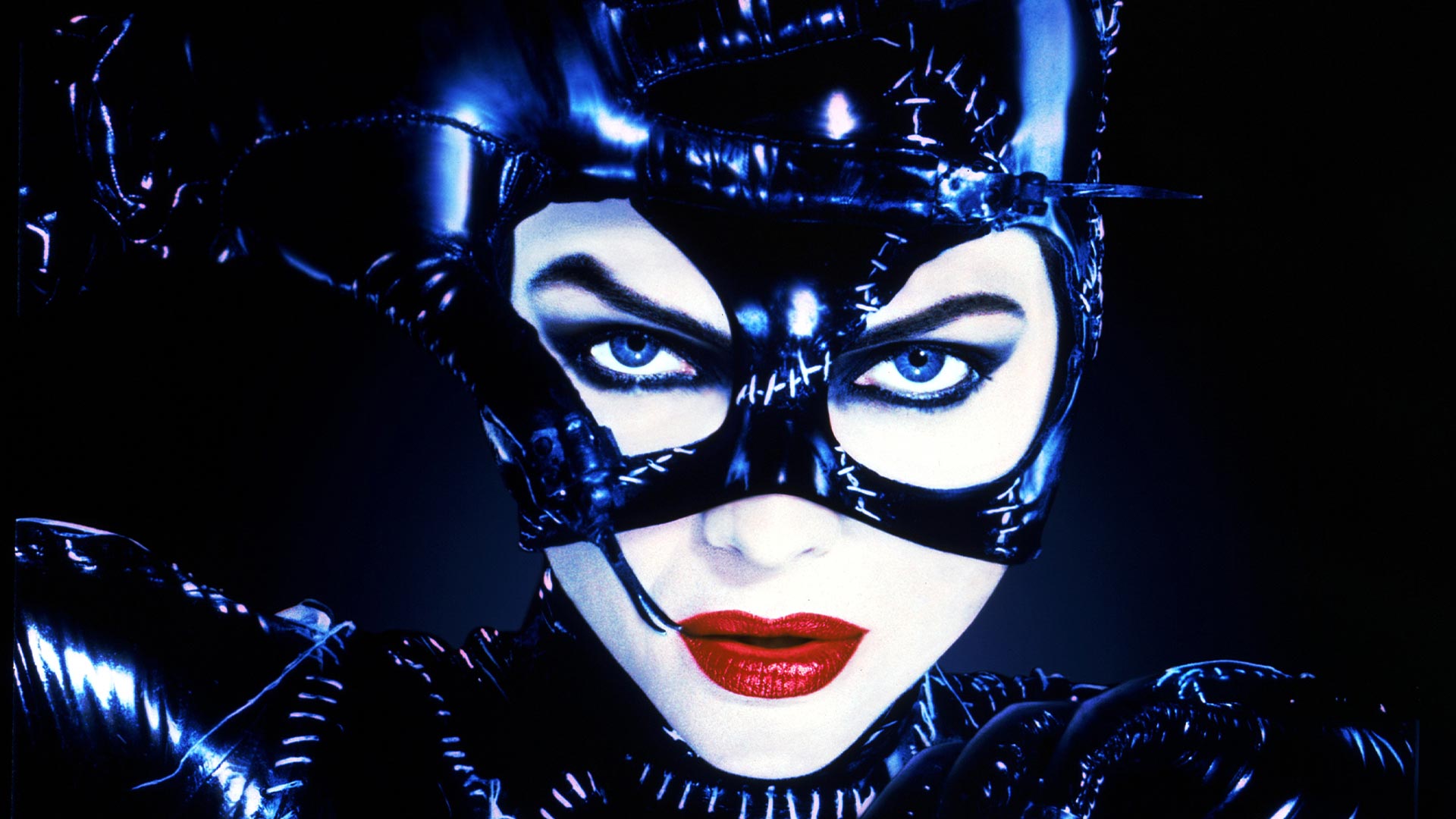 With the live-action Catwoman of the '90s, a lot had to be updated from the social era of the '60s. Previously, the character could be presented as only so villainous, and Batman’s attraction to her was dressed up as yearning for her rehabilitation. The sexual attraction between the two – present since her very first appearance in Batman #1 – had to be sublimated with winks and nods to the audience. Not so much with Batman Returns. Complete with a sleeker, skintight costume, this version of Selina Kyle, played by Michelle Pfeiffer, began as a mousey assistant to business mogul Max Shreck, and went through a total persona rehaul after Shreck attempted to kill her. For the first time on screen, Catwoman was presented as an anti-hero, albeit a deeply disturbed one. Attacking Shreck’s businesses and teaming up with the Penguin to get revenge on Batman for getting in her way, Selina’s newfound confidence led her to pursue a romance with Bruce Wayne. In the film's climax, the two learn each other’s secret identities and struggle to embrace their attraction. But they refuse to deny the parts of them that operate on opposite sides of the law. This tension is more tragic than that of the '60s version, and paved the way for the heroic Catwoman of her 1993 comic book series and the eventual 2004 Halle Berry-starring Catwoman film. 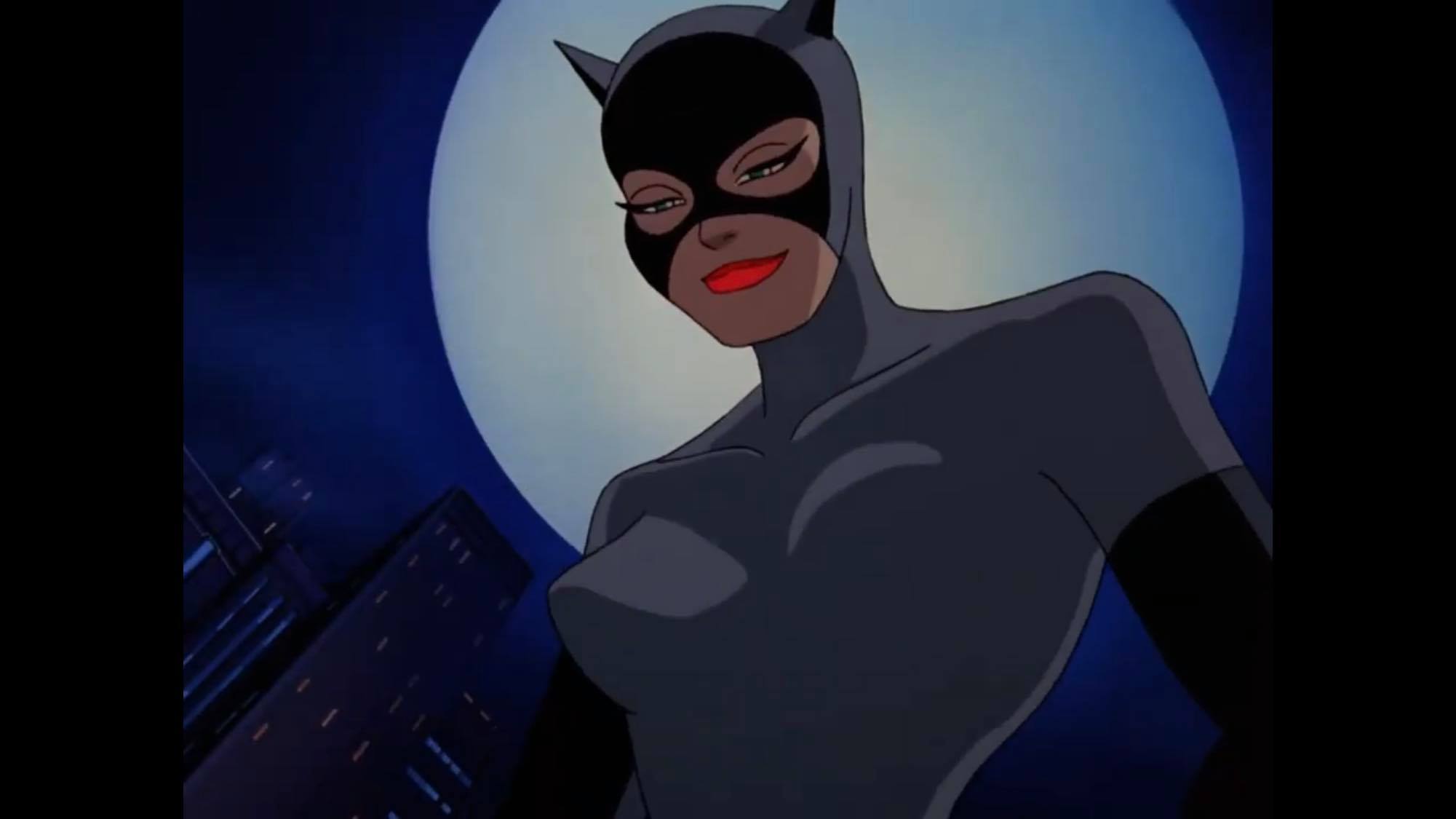 The anti-heroics were increased for Catwoman in Batman: the Animated Series. While her comic book kleptomania played into episodes such as “Catwalk” and “Cult of the Cat,” she and Batman found themselves on the same side more often than not. Introduced in this incarnation was a strong sense of animal rights activism. “The Cat and the Claw” sees her financing charity functions to preserve spaces for mountain lions by stealing from business competitors, pitting her against the terrorist Red Claw. “Cat Scratch Fever” has her again at animal’s defense when she discovers a plot to infect Gotham City strays with a deadly virus. While the sexual tension between her and Batman stayed intact, Selina’s rebellious nature always drew her and Batman apart, no matter how simpatico they otherwise found themselves. 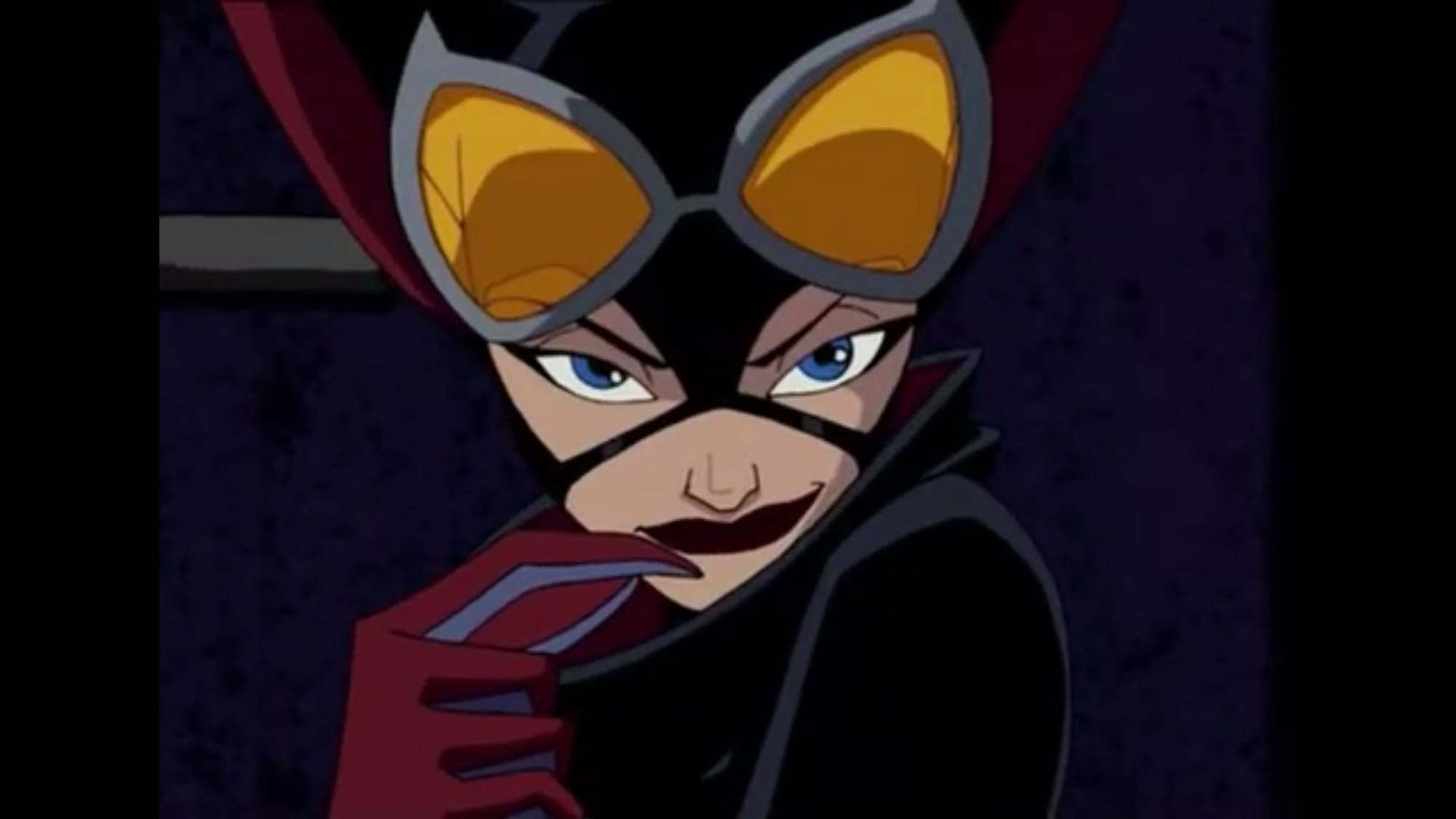 Catwoman only had a small number of appearances in The Batman and most of them played on previously laid ground. As the series was mostly an action cartoon, Catwoman’s episodes all involved a theft or heist, and little else. Her first appearance in “The Cat and the Bat” gave a glimpse at a techno-wiz background. While fighting with Batman, she manages to sneak off his with utility belt. The next day is spent with her tinkering its various locks and mechanics, hoping to use it as a homing beacon for Batman’s location. Ultimately, she hijacks the Batmobile, giving chase across downtown Gotham and leaving Batman without his most valuable assets until the two joined forces to fight the Yakuza at the end of the episode. 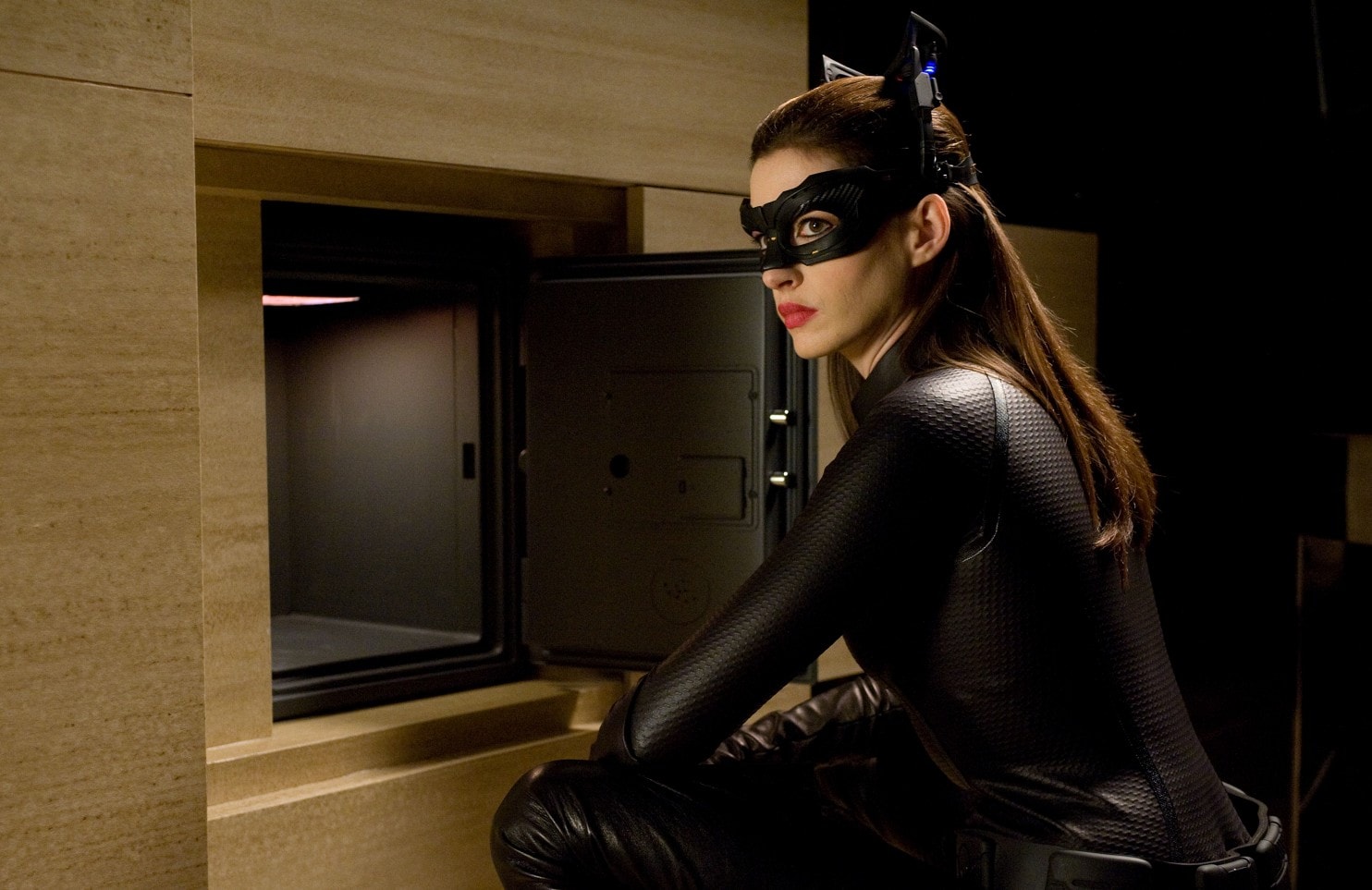 Infamously, Catwoman had a solo theatrical feature in 2004 starring Halle Berry, but the character was explicitly set to be separate from the Selina Kyle character. The true Catwoman didn’t reappear in films until 2012’s The Dark Knight Rises, where battled not only Batman but Bane and the League of Shadows. In this version, Selina Kyle is presented as a world-class thief who had been in and out of jail since she was a teenager. Throughout the film, we learn how protective Selina is of the less fortunate, robbing from those who she sees as leeches on a vulnerable society. She runs afoul of Bane, and aids Batman in bringing him and the League of Shadows down after Gotham has been conquered. While the version depicted in this film is less flamboyant that previous incarnations, her love of stealing but resentment of the overclass was a first for the media incarnations, though it does borrow from her presentation in Batman: Year One. 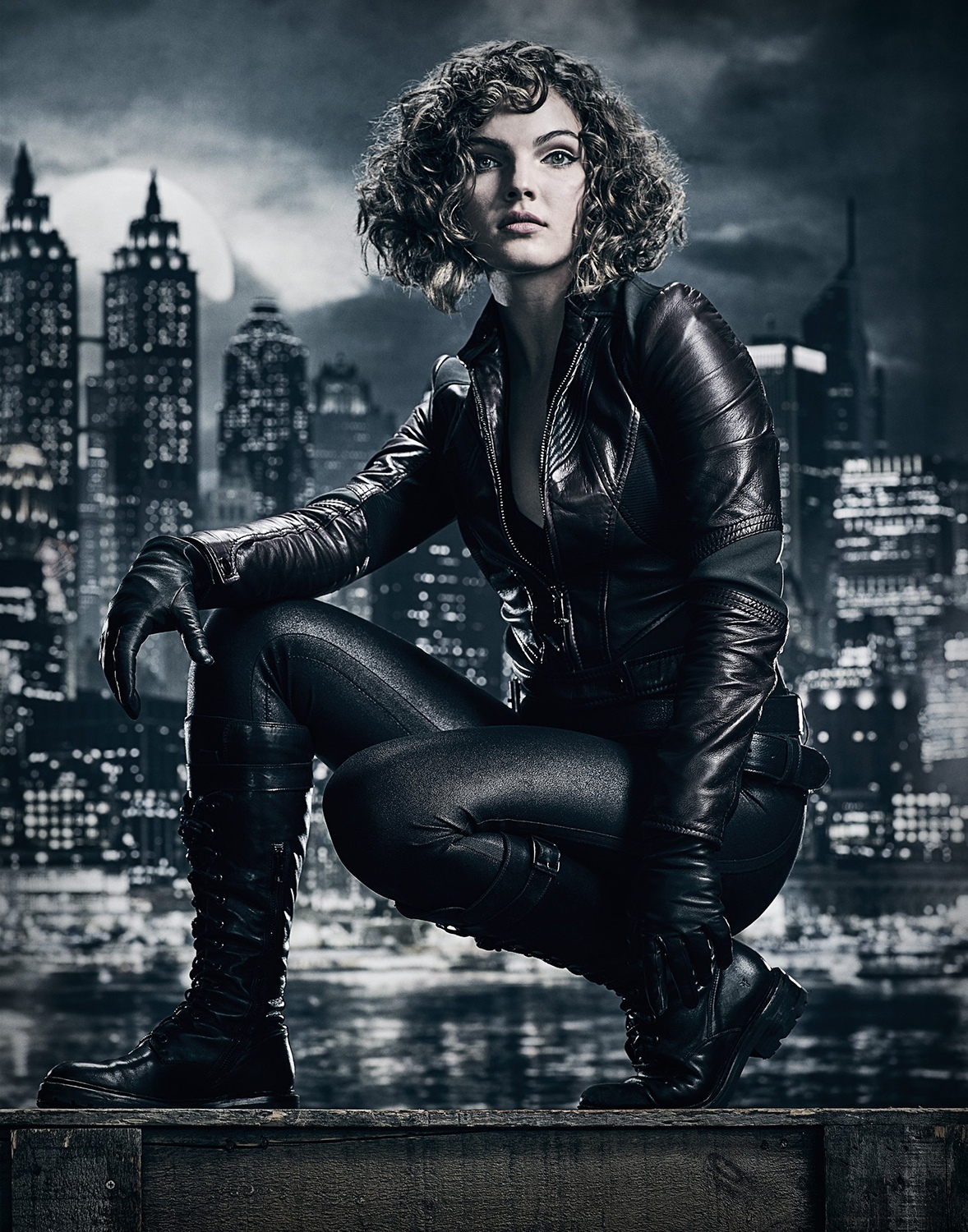 One of the more major media incarnations of the past few years, as well as the most recent, Selina Kyle – as played by Camren Bioncondova – is presented in the series as a young thief who steals to survive. She personally witnesses the death of the Waynes, and is placed at Wayne Manor by Detective James Gordon for safety. There, she forms a gradual friendship and eventual romance with young Bruce Wayne. Throughout the five seasons, Selina’s loyalties towards her friends and the villains of Gotham she allies herself with run in conflict with each other, forcing her to make decisions about the kind of person she wants to become. Tempered by Bruce’s heroic nature but burned by his abandoning her at the end of the fifth season, Selina grows up to be a socialite by day, and cat burglar by night, having learned to rely only on herself. 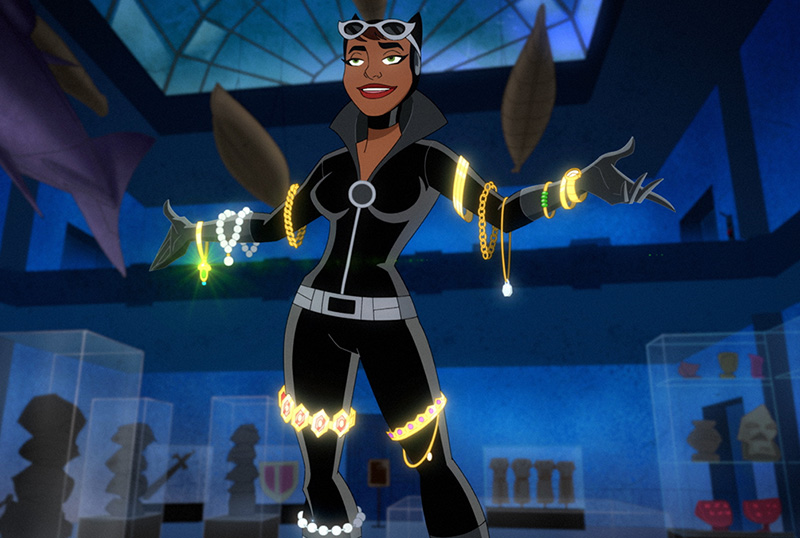 In the second season Harley Quinn episode “Trapped,” Harley and Ivy are after Firefly’s flame gun, which is being held in a museum of super-criminal artifacts by Doctor Trap, who’s laced the place with deathtraps. To get inside healthily, they enlist the help of Catwoman, whose portrayal in this series underlines how she is the world’s greatest cat burglar. Never without an escape route, always stealing and scheming while she’s charming anyone in sight, this version – voiced by Sanaa Lathan – has only one thing in mind: the score. But its her charm and elegance that leaves Harley and Ivy unable to do anything but admire her for her gusto…mostly. By the end of the episode they’re pretty ticked off.

What’s your favorite media version of Catwoman? Let your voice be heard in our Community!