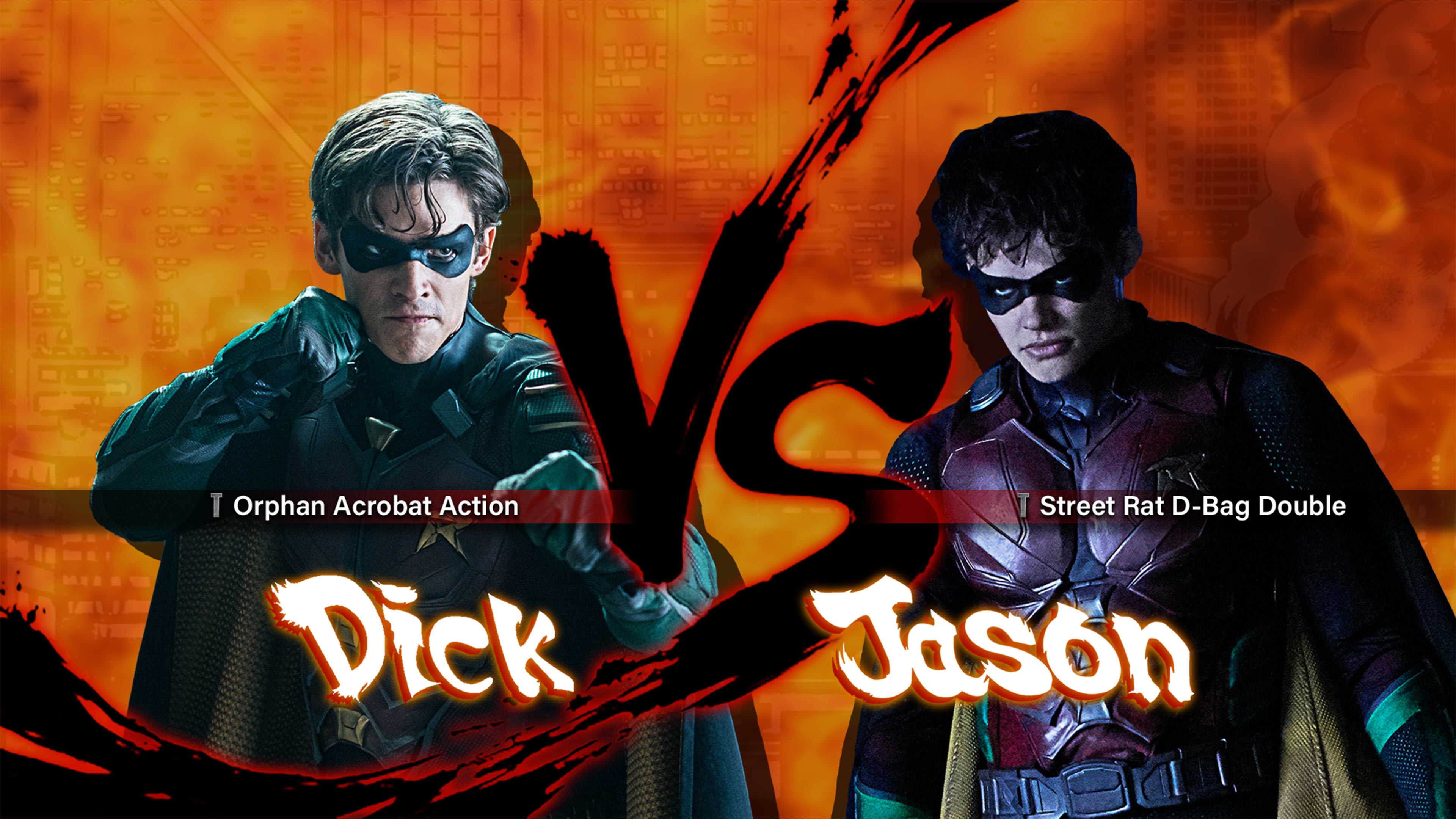 If you’ve been watching DC Universe’s Titans, then you’ve probably seen Jason Todd strutting his stuff like he’s the greatest superhero to appear since Action Comics #1. But Jason might not be as good of a Robin as he says he is. And Dick Grayson, Jason’s predecessor in the role, certainly has the respect of Batman and his teammates, but has it been earned? Could Jason actually be a better Robin than Dick? Let’s look at the evidence. 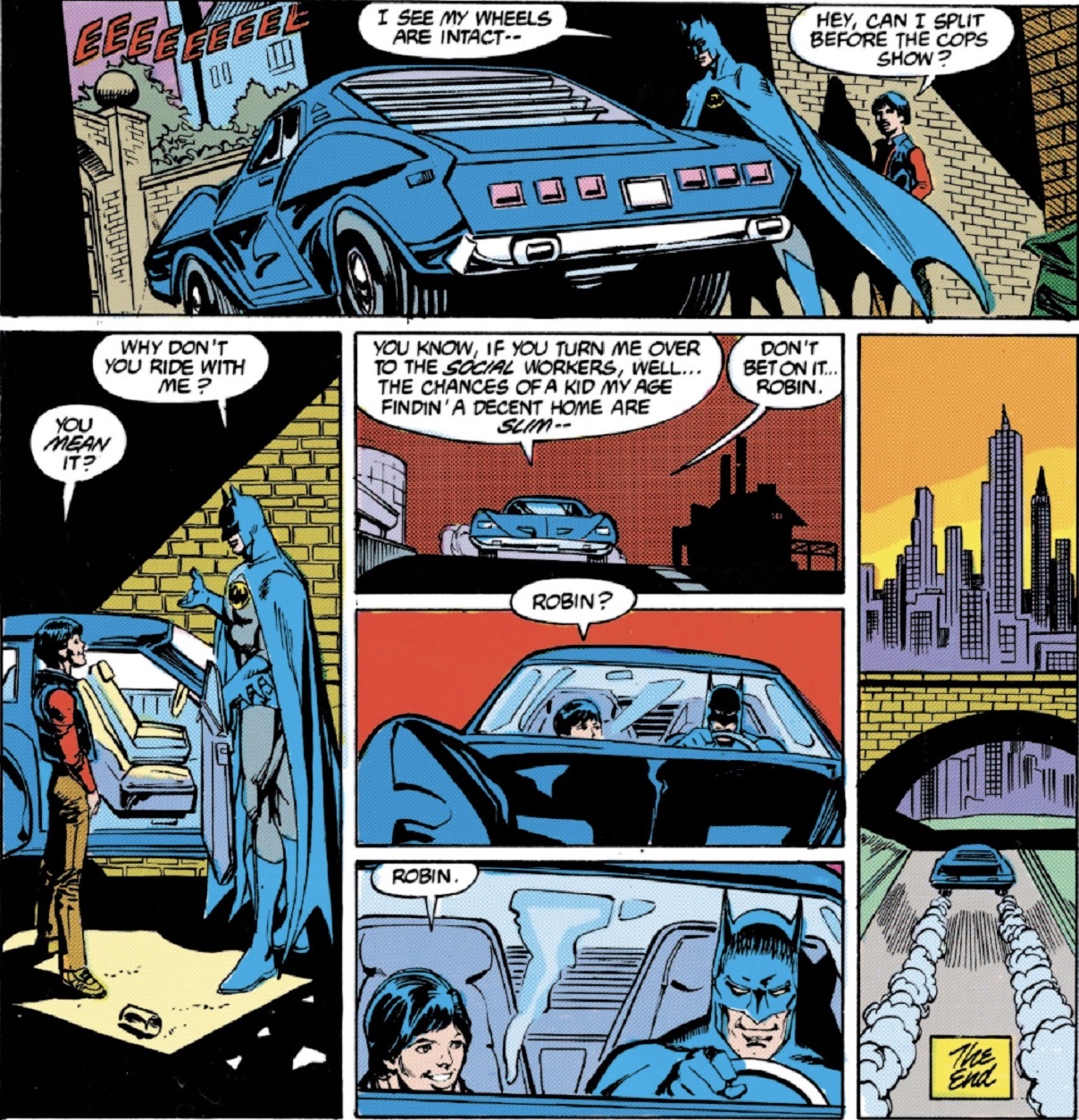 Dick: Like Bruce Wayne, Dick watched his parents die at a young age when their circus trapeze line broke during a performance in Detective Comics #38. Batman saw himself in Dick and took the young orphan under his wing. After a cool training montage (you’ve got to have one of those) Dick made his grand debut as Batman’s new partner, Robin the Boy Wonder!

Jason: The Dark Knight was surprised to find the wheels missing from his Batmobile in Batman #408. He discovered that the tires had been jacked by a street orphan named Jason Todd, who'd been fending for himself since the death of his mother and disappearance of his father. After the youngster helped him take down Ma Gunn’s criminal operation, Batman decided to make Jason his new partner.

The Winner: Sorry Dickie, but Jason’s origin is a bit cooler. It was a bit obnoxious to steal the wheels off the Batmobile, but he was able to surprise Batman, which is no easy feat. Plus, Jason survived on the streets by himself. This one goes to Jason. 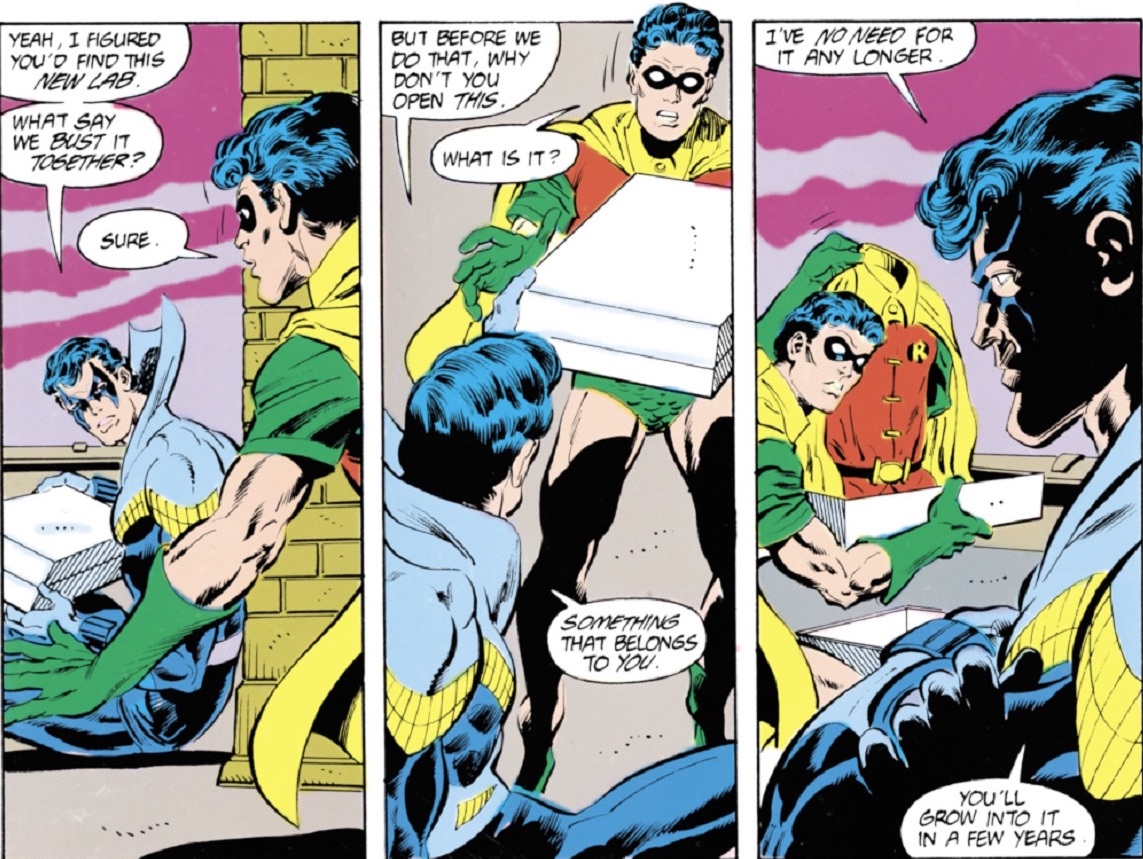 Dick: The iconic Robin costume made its grand debut in Detective Comics #38 along with Dick Grayson. The short pants may not be practical, but you can’t beat the original. In some versions of Dick’s origin, the costume is a tribute to his circus outfit. Which doesn’t do much to hide Dick’s secret identity, but it seemed to work for decades.

Jason: Batman gave Jason his first Robin costume in Batman #410 and it’s nothing more than a copy of Dick’s first outfit. Batman tried to make it seem cooler by saying it has more features, but come on -- it’s basically a hand me down from Dick. When Dick first met Jason in Batman #416 he had a gift for the new Robin – another one of his old costumes. Remember how it felt when people gave you socks for your birthday? That must be how Jason felt.

The Winner: Tradition is a sacred thing, but Tim Drake and Damian Wayne both added their own unique touches to the Robin costume while still keeping it close to Dick’s original design. Jason added nothing new or special to the uniform. This point goes to Dick. 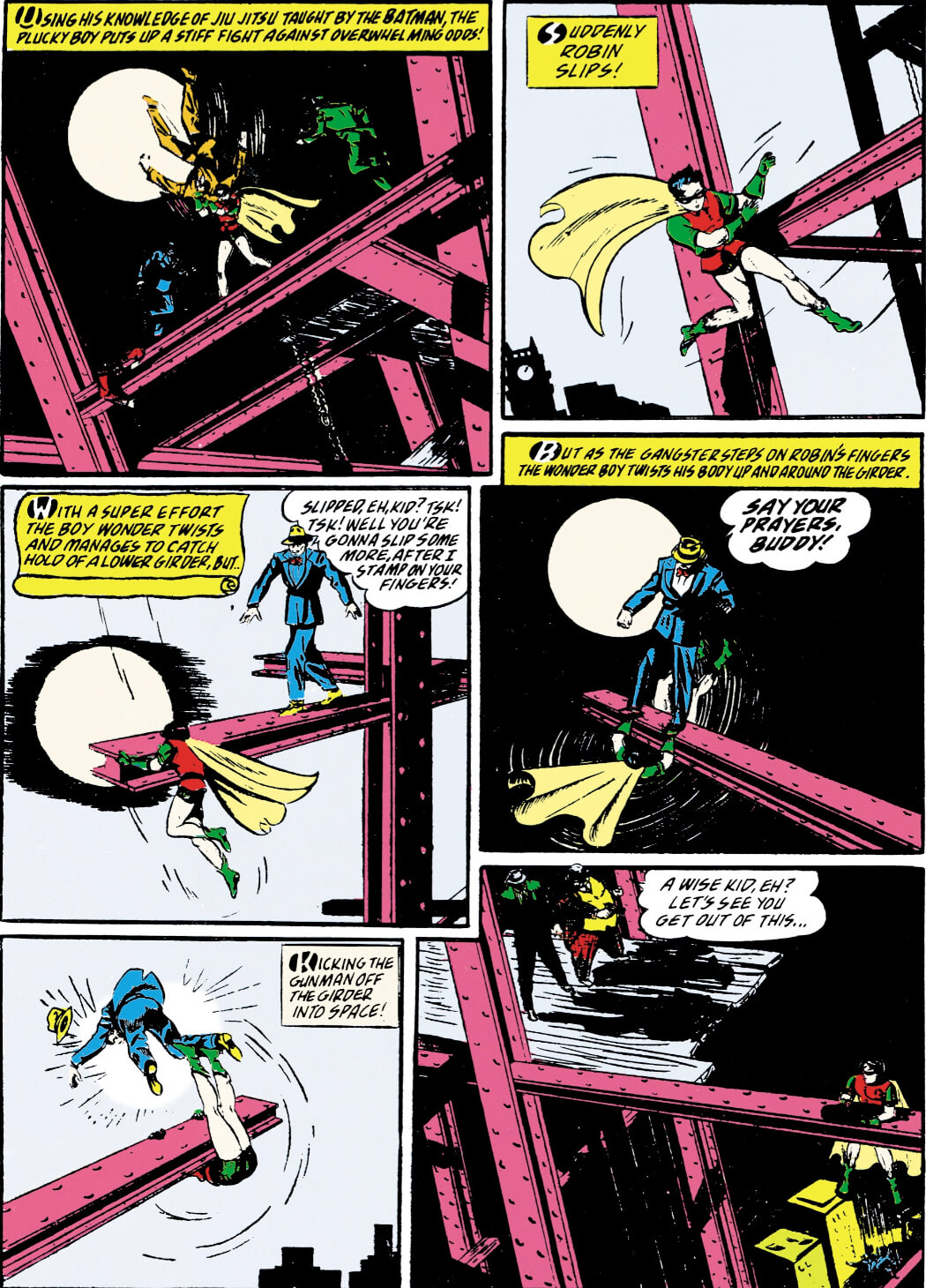 Dick: In 1940’s Detective Comics #38, Dick donned the Robin costume for the first time and went on a killing spree. If you think we’re exaggerating then check out the issue for yourself. He followed a group of protection racket gang members to a construction site where he proceeded to toss them off the girders. During the night of Robin’s debut, the skies of Gotham were filled with falling criminals. Some say it’s actually what inspired the hit song “It’s Raining Men,” but historians are divided on this. Dick even commemorated the occasion by taking a photograph of Boss Zucco murdering one of his men, though he or Batman could’ve easily saved them. People give Jason a hard time for being the violent Robin but it might be time to rethink that.

Jason: In Batman #410, Jason performed well during his first outing as Robin. He was able to solve a puzzle that was sent to Commissioner Gordon, defeat Two-Face’s thugs, and rescue a hostage. And he did it all without killing a single person.

The Winner: This one goes to Jason, since he didn’t leave behind a trail of corpses on his first outing. Get off your high horse, Dick. The bloodstains from those crooks are still on the sidewalk. 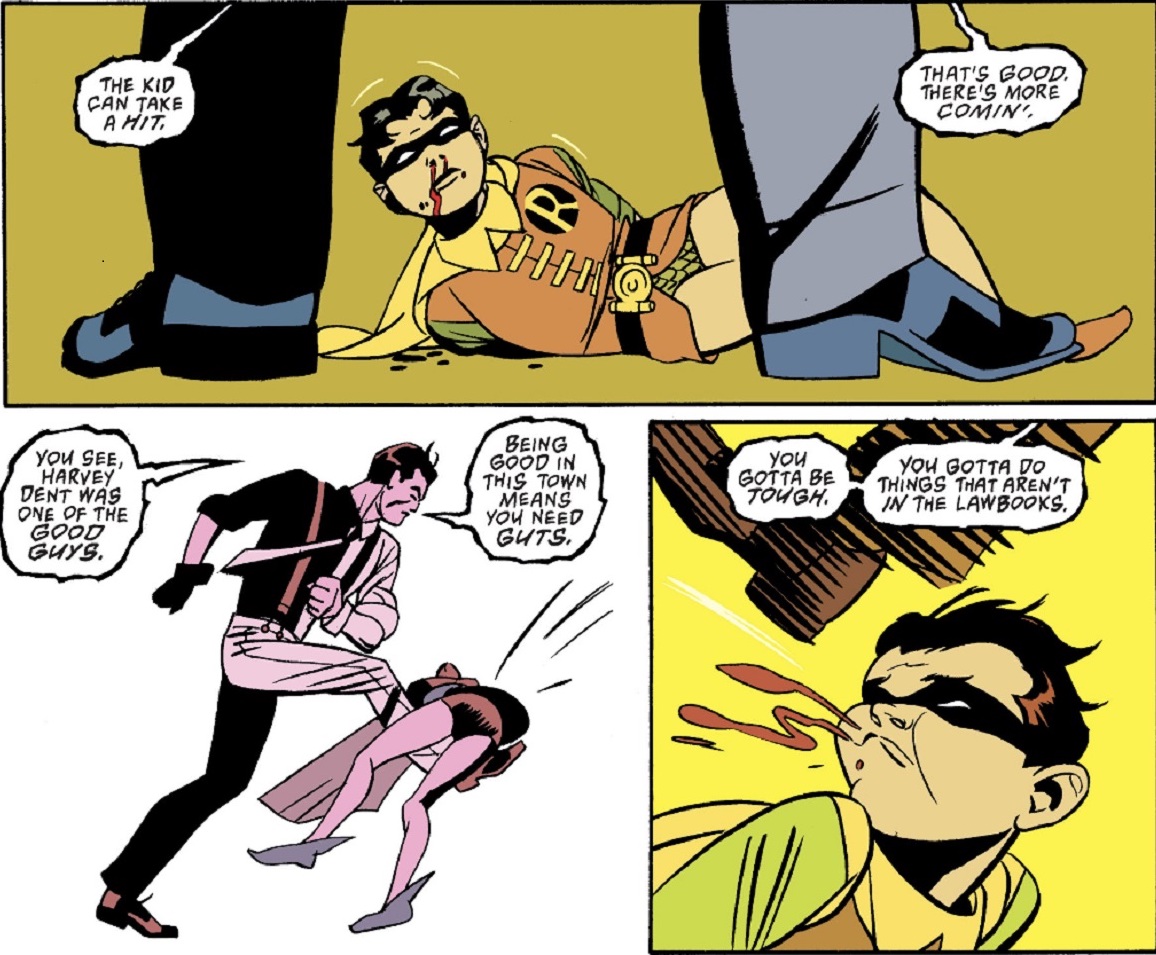 Dick: The original Robin took on Two-Face in Robin: Year One #2, and it wasn’t pretty. We won’t beat around the bush, Dick got his butt handed to him. Apparently the Boy Wonder isn’t so tough when there aren’t any girders to throw people off of. Batman and Robin got captured by Two-Face. And despite the Dark Knight’s warnings, Robin played along with Two-Face’s game. The Boy Wonder hoped he could get Two-Face to free Batman and a captive judge if he convinced him to flip his coin, but the criminal never had any intention of letting everyone walk. Two-Face murdered the judge, and gave Dick a savage beating.

Jason: Two-Face first encountered the second Robin in Batman #410-411. Like Dick, Jason was also captured by Two-Face but he did so willingly to save a hostage. Two-Face had Jason at his mercy and the Boy Wonder was still able to escape with his life intact. After discovering that Two-Face murdered his father, Jason almost gave up his chance at being Robin by strangling Two-Face, but Batman talked him down. By the end of the story Jason was able to defeat his father’s murderer and keep his anger in check.

The Winner: Jason gets the point for this one. Dick got a beating from Two-Face, while Jason gave a beating to Two-Face. 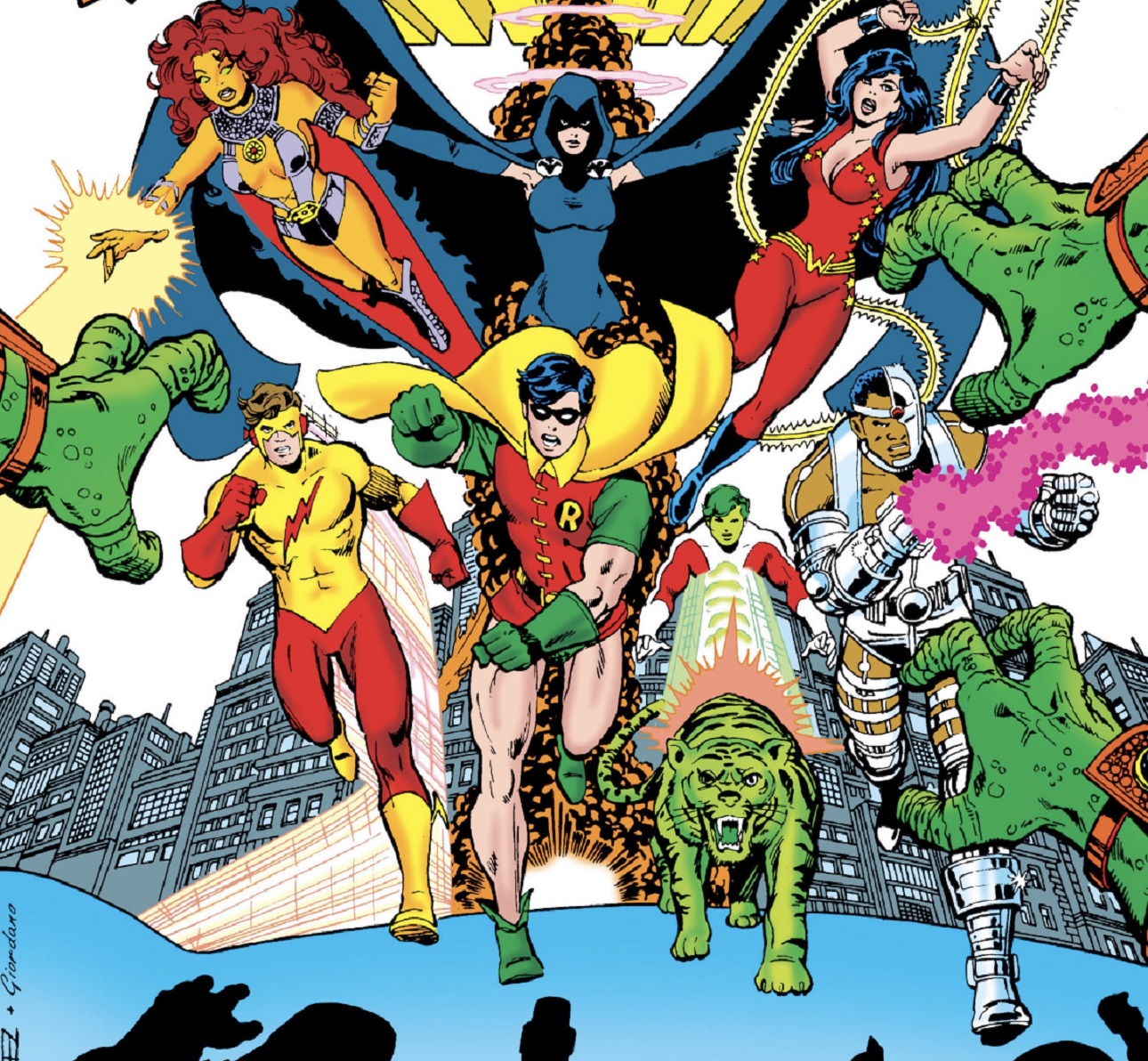 Dick: Dick has led a few different groups over the years, most famously the Teen Titans. At times Dick’s leadership skills haven’t been the best, but at the end of the day he’s led the Titans to some of their greatest victories. The Titans are one of the pillars of the DC Universe, and that’s thanks in no small part to Dick’s leadership.

Jason: Have you ever heard of the Outlaws? They might not be as big as the Justice League, or even the Ravers, but they’ve had some pretty cool adventures. The Outlaws are pretty much whomever happens to be traveling with Jason Todd at any given moment. Originally it was Arsenal and Starfire, and they were later replaced by Bizarro and Artemis. Jason isn’t exactly a team player, so the fact that the Outlaws even exist is nothing short of a miracle.

The Winner: This one is Dick all the way. Jason has never been a team player, while Dick’s Teen Titans have grown to become one of the most iconic teams in the DC Universe. Warner Bros. probably won’t be making an Outlaws Go! animated series anytime soon. 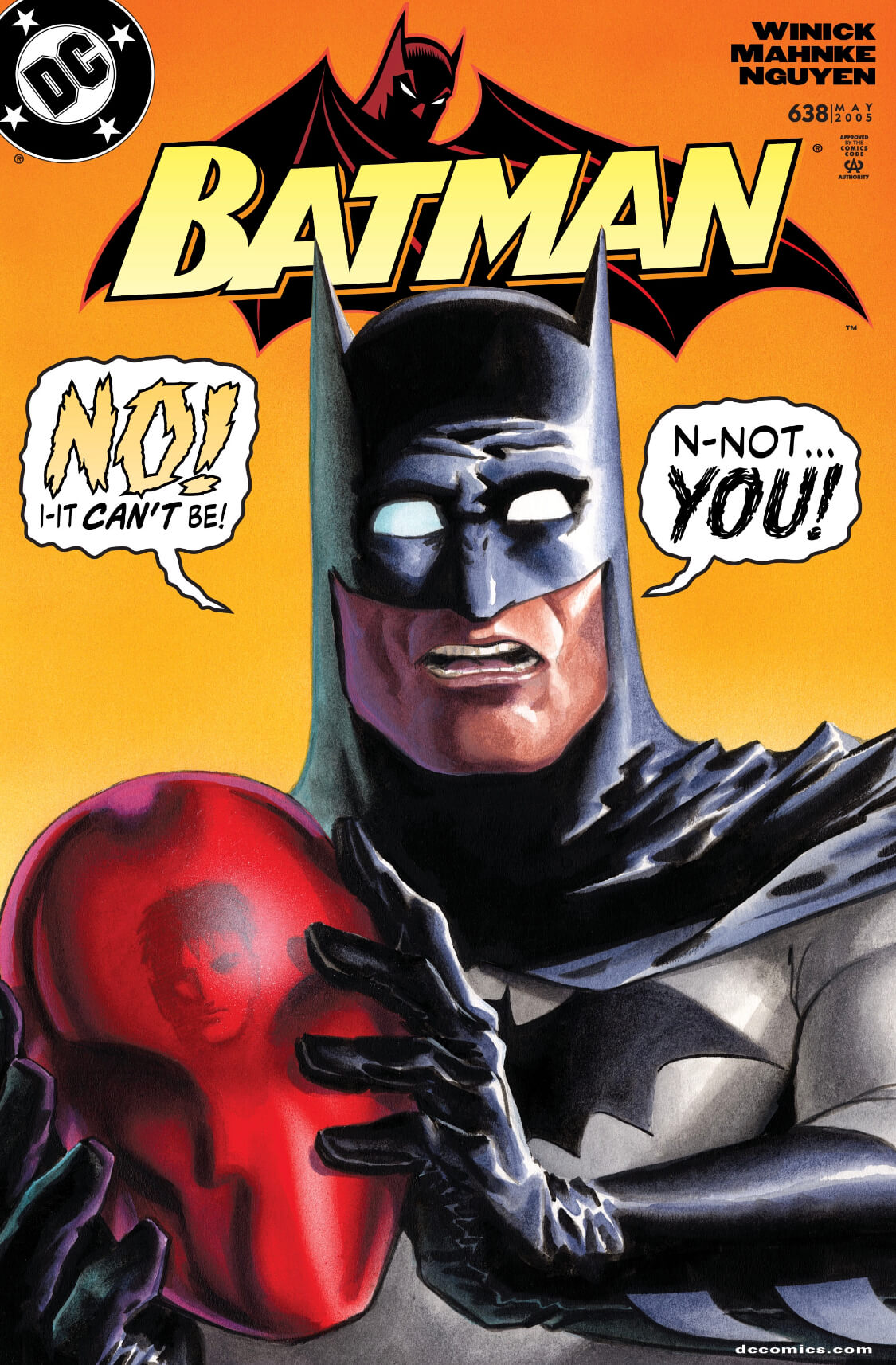 Dick: After growing apart from Bruce for some time, Dick split off from Batman, and carved his own identity. He unveiled the Nightwing identity in Tales of the Teen Titans #44, and history was made.

Jason: After the Joker killed Jason in “A Death in the Family,” the Boy Wonder made his shocking returns years later in a storyline called “Under the Hood.” Jason was revived by a combination of Ra’s al Ghul’s Lazarus Pit and Superboy Prime’s reality warping. The former Robin decided to be the vigilante Batman had always discouraged him from being, and took on the Joker’s former mantle – the Red Hood!

The Winner: This is a hard one, but we’re going to have to give this to Jason. Nightwing is iconic, and one of the greatest examples of a sidekick graduating in comics, but you can’t deny the cool factor in Jason’s surprise resurrection. Look at that above image, even Batman was shocked! Did Batman make a face like that when Dick Grayson became Nightwing? Nope! Jason Todd never plays it safe and always has a surprise ready.

Now, after carefully tallying the results, let’s see who the winner is…. 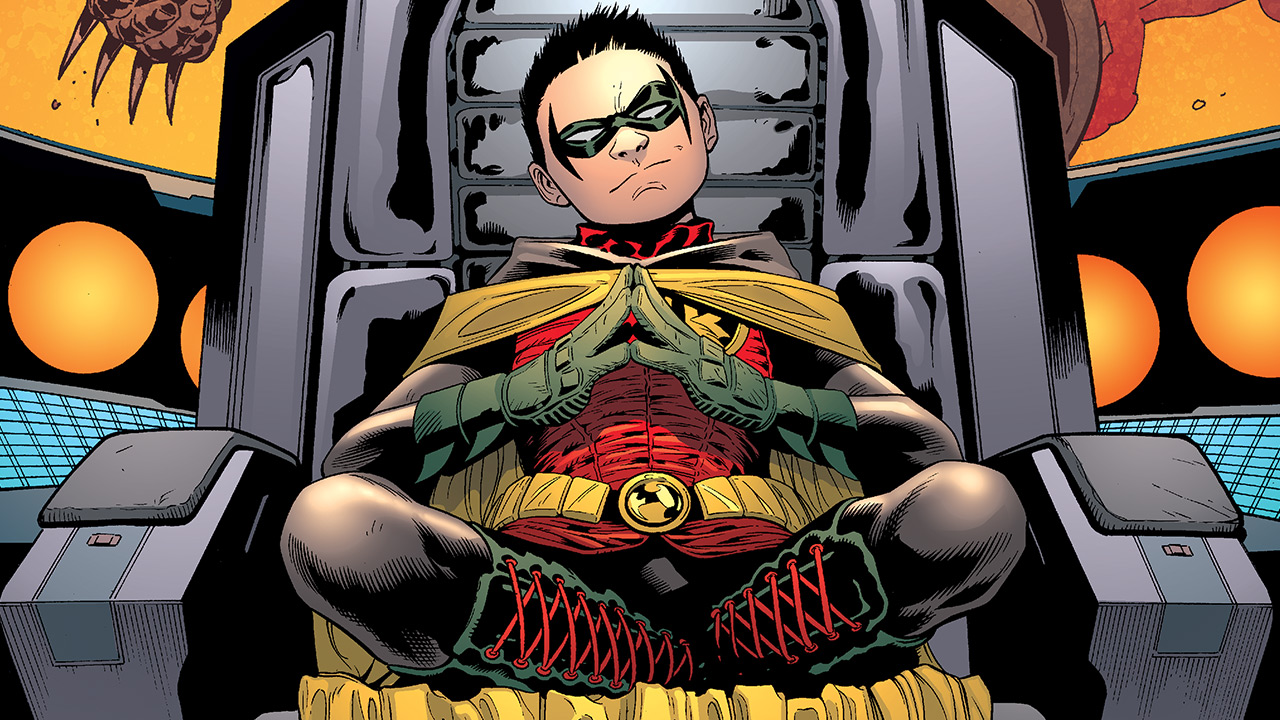 Damian Wayne?!?! Who's been messing with our computer?! While we chase after the little scamp, you can watch new episodes of DC Universe’s Titans every Friday and decide for yourself who the best Robin is.

Which Robin do you think is the best? Let us know in our Community!