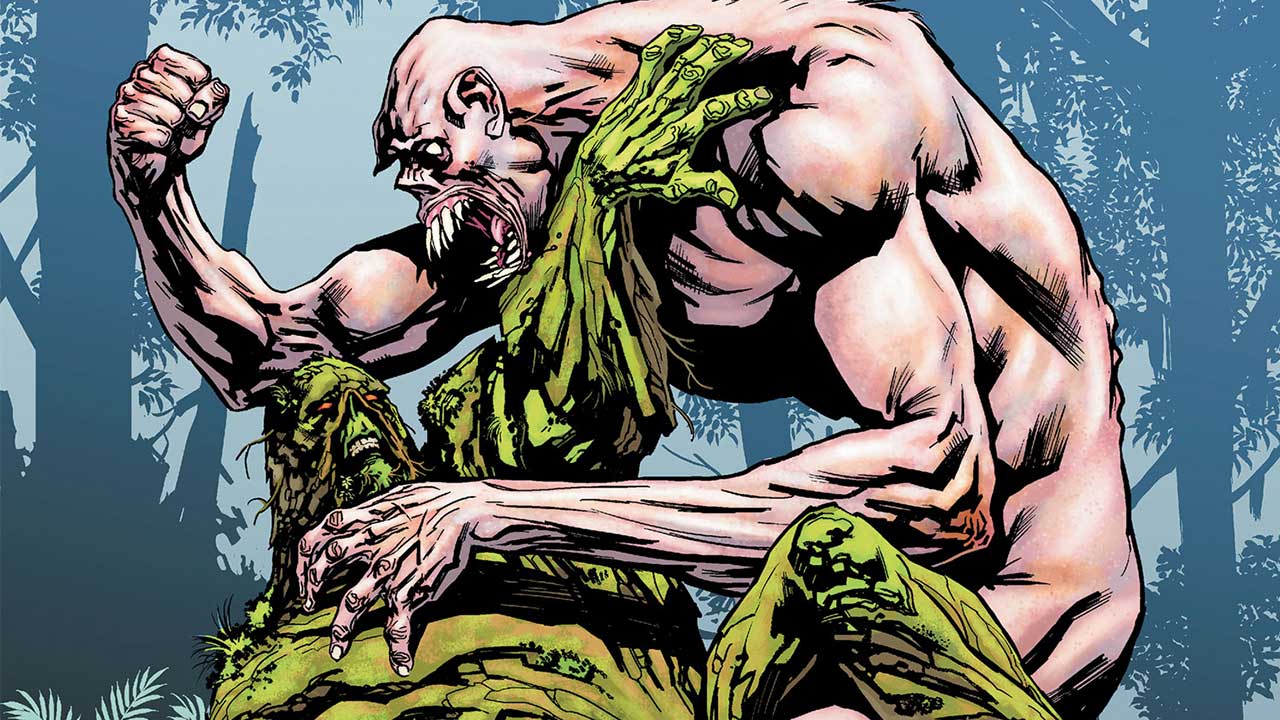 If you think Swamp Thing is creepy, wait until you meet some of his enemies! Since his debut in 1971's House of Secrets #92, Swamp Thing has faced down wicked sorcerers, mutated vagrants, alien plant life, and dark-hearted industrialists. It takes all the powers of the Green to keep these menaces at bay. Here are our picks for the top 5 Swamp Thing villains... 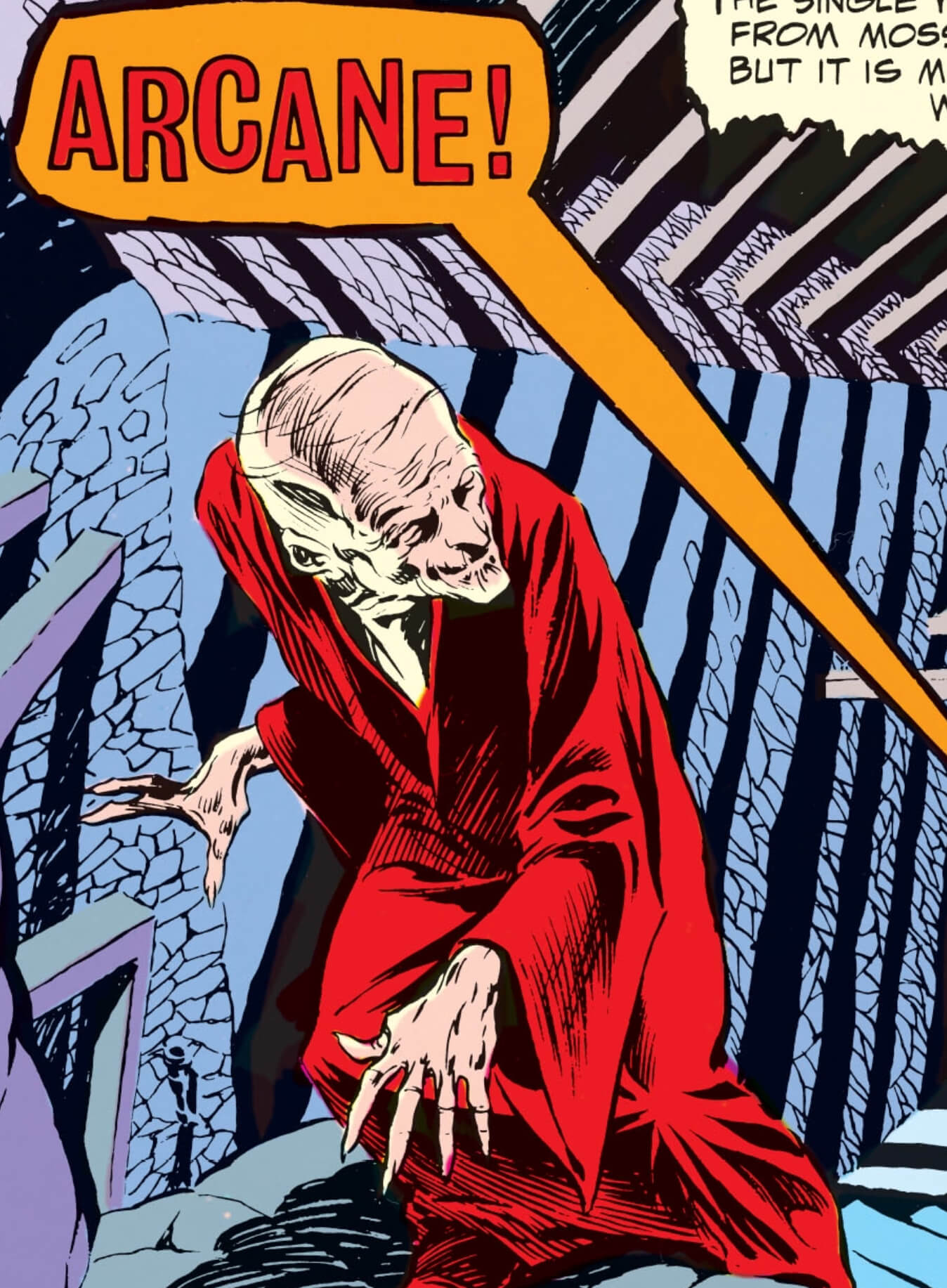 BIO: Anton Arcane might be one of the most twisted souls in the entire DC Universe. In his younger days, he served alongside Adolf Hitler, and encouraged the tyrant to attempt world domination. And when a girl named Anise rejected Anton for his brother, he convinced the townspeople she was a witch and had her burned at the stake. Then Arcane reanimated his brother’s corpse, turning him into the Patchwork Man and locking him in his dungeon. He even killed his own niece, Abby Arcane, and sent her soul to Hell! Mixing science with magic, Arcane’s main goal has long been to extend his own life by any means necessary.

WHY HE HATES SWAMP THING: When Anton first met Swamp Thing, he sought to use Swamp Thing’s body as a new vessel for his soul in the place of his own aged husk. At first Swampy agreed, since the bargain would turn him human, but when he realized Arcane’s true nature, he reversed the spell. Arcane was infuriated and has had it out for Swamp Thing ever since. 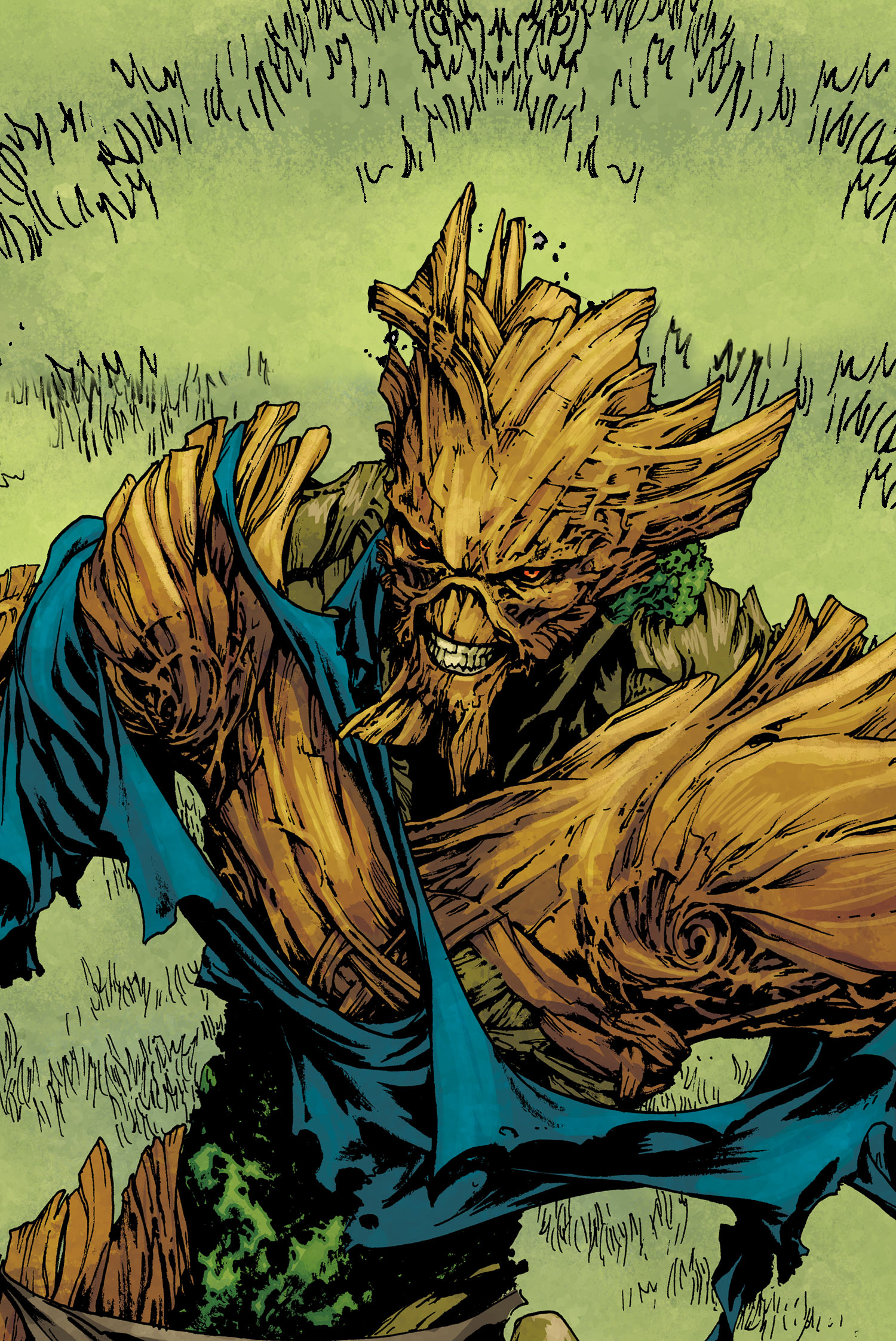 BIO: In his original incarnation, Jason Woodrue was an exile from an interdimensional world inhabited by plant-like people. After coming to Earth, he decided to use his natural flora-related abilities towards world domination, but was thwarted by the Atom. He’s been known by many monikers, including Floro, Seeder, the Plant Master, and, most popularly, the Floronic Man.

FIRST APPEARANCE: The Atom (1962) #1 (written by Gardner Fox and penciled by Gil Kane)

POWERS: Thanks to his alien body, Jason Woodrue has super strength and stamina. Jason also has the power to control plant life around him and create monstrous shrub creatures.

WHY HE HATES SWAMP THING: Jason Woodrue had been hired to study Swamp Thing, and in so doing he discovered the creature was a plant who had absorbed the consciousness of the late Alec Holland. Woodrue then observed Swamp Thing as he retreated into the Green and ate pieces of the creature’s body to gain understanding of his powers. The experience drove Woodrue mad, and Swamp Thing retaliated by cutting him off from the Green. 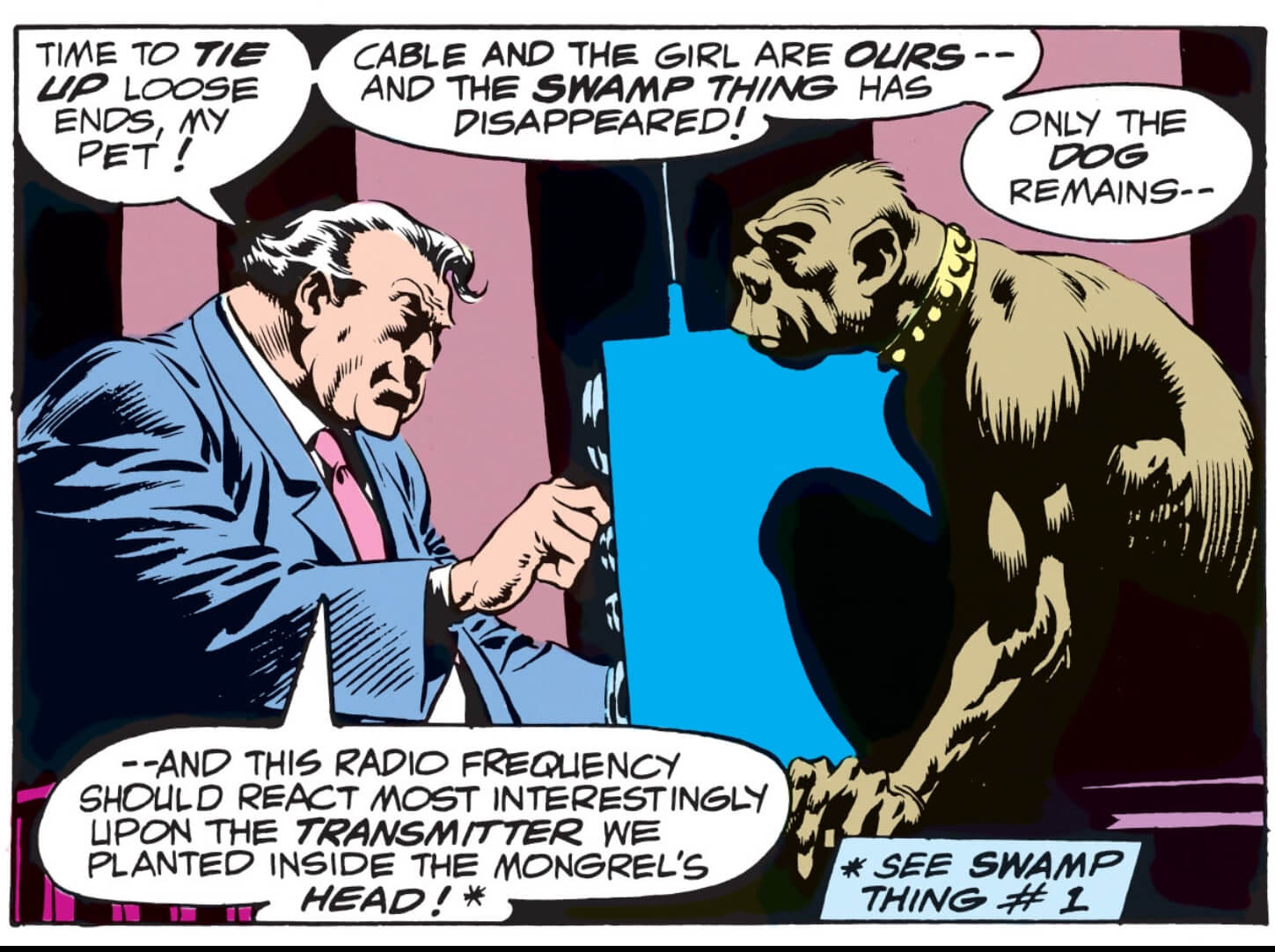 BIO: If it wasn’t for Nathan Ellery, there never would have been a Swamp Thing. Nathan is the leader of a criminal organization known as the Conclave, and it was his men who blew up Alec Holland’s lab, setting in motion the events that created Swamp Thing. Nathan hid his criminal ties from the public at large and blended in as a member of Gotham City’s high society. He was even able to operate his organization in Gotham without Batman suspecting his true nature.

POWERS: While Nathan may not have super powers, the resources from his criminal empire have made him a force to be reckoned with. Thanks to the Conclave’s scientific abilities, Nathan has been able to cheat death with a high-tech life support chair.

WHY HE HATES SWAMP THING: Nathan’s mission against Swamp Thing started out as strictly business. He sought to use the creature to learn the secrets of Alec Holland’s bio-restorative formula. Over time, Swamp Thing killed the members of the Conclave who threatened him, and ruined some of Nathan’s plans, creating a personal vendetta. Swamp Thing also hates Ellery, since the criminal mastermind was the one who ordered the deaths of Alec and Linda Holland. 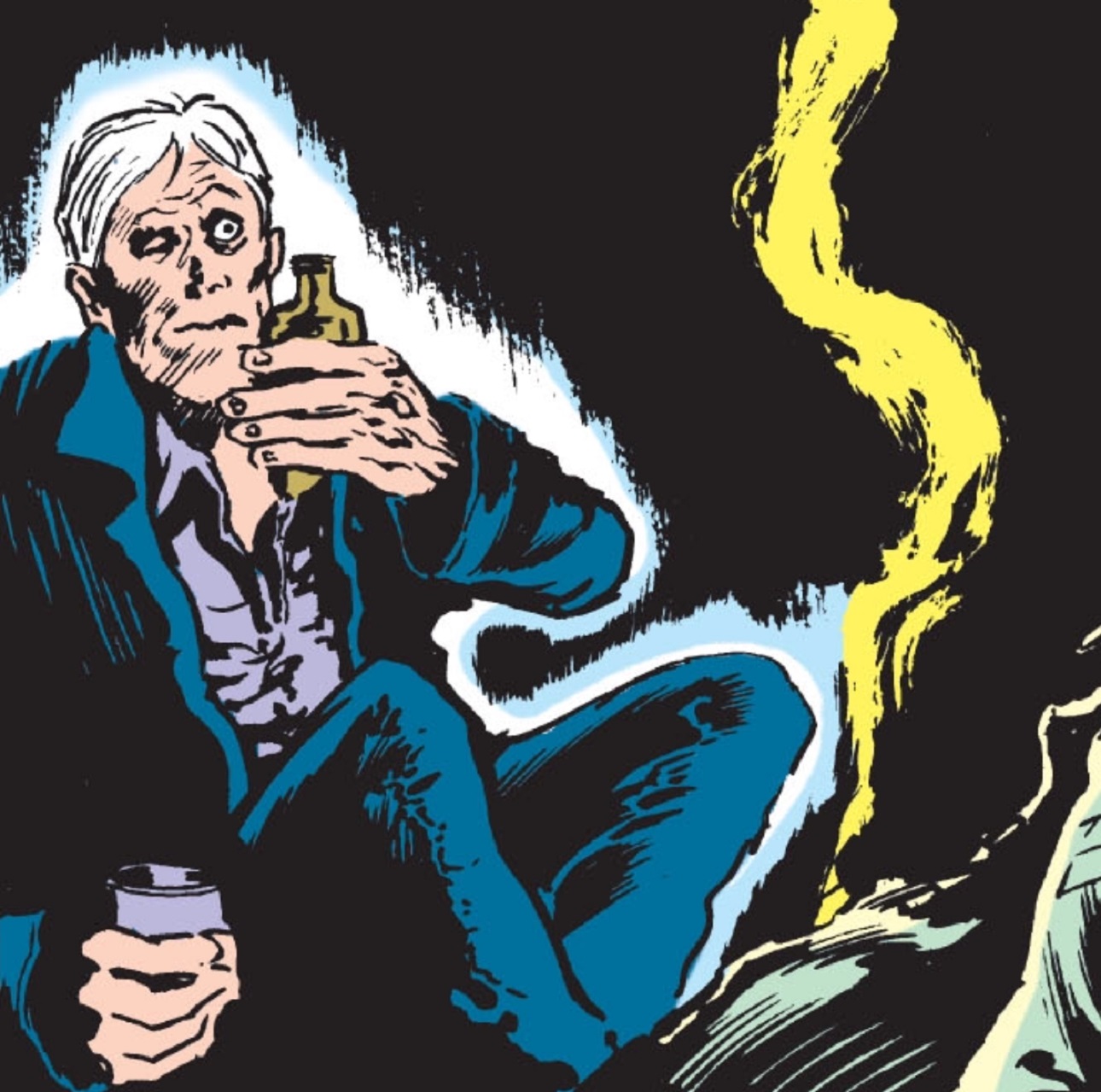 BIO: Some people enjoy a beer or a soft drink, but Nukeface prefers to ingest toxic waste. His addiction to nuclear chemicals altered the former vagrant’s body, causing him to become a walking biohazard. Nobody knows his true name, but a gang of local kids gave him the nickname “Nukeface," which seems to have stuck.

FIRST APPEARANCE: The Saga of Swamp Thing #35 (written by Alan Moore and penciled by Steve Bissette)

POWERS: Nukeface’s mutated physiology has given his body a deadly radioactive touch. Making physical contact with Nukeface proves harmful to his victims, including Swamp Thing, whose plantlike skin is vulnerable to the madman’s touch.

WHY HE HATES SWAMP THING: When Nukeface met Swamp Thing, he begged the creature to help him dig up the toxic chemicals he so desperately craved. Thinking he was being generous, Nukeface shared some of his own toxicity with Swampy, causing the creature to disintegrate. Not realizing he was responsible for Swamp Thing’s deterioration, Nukeface fumed that the creature had spurned his request to help retrieve the chemicals. 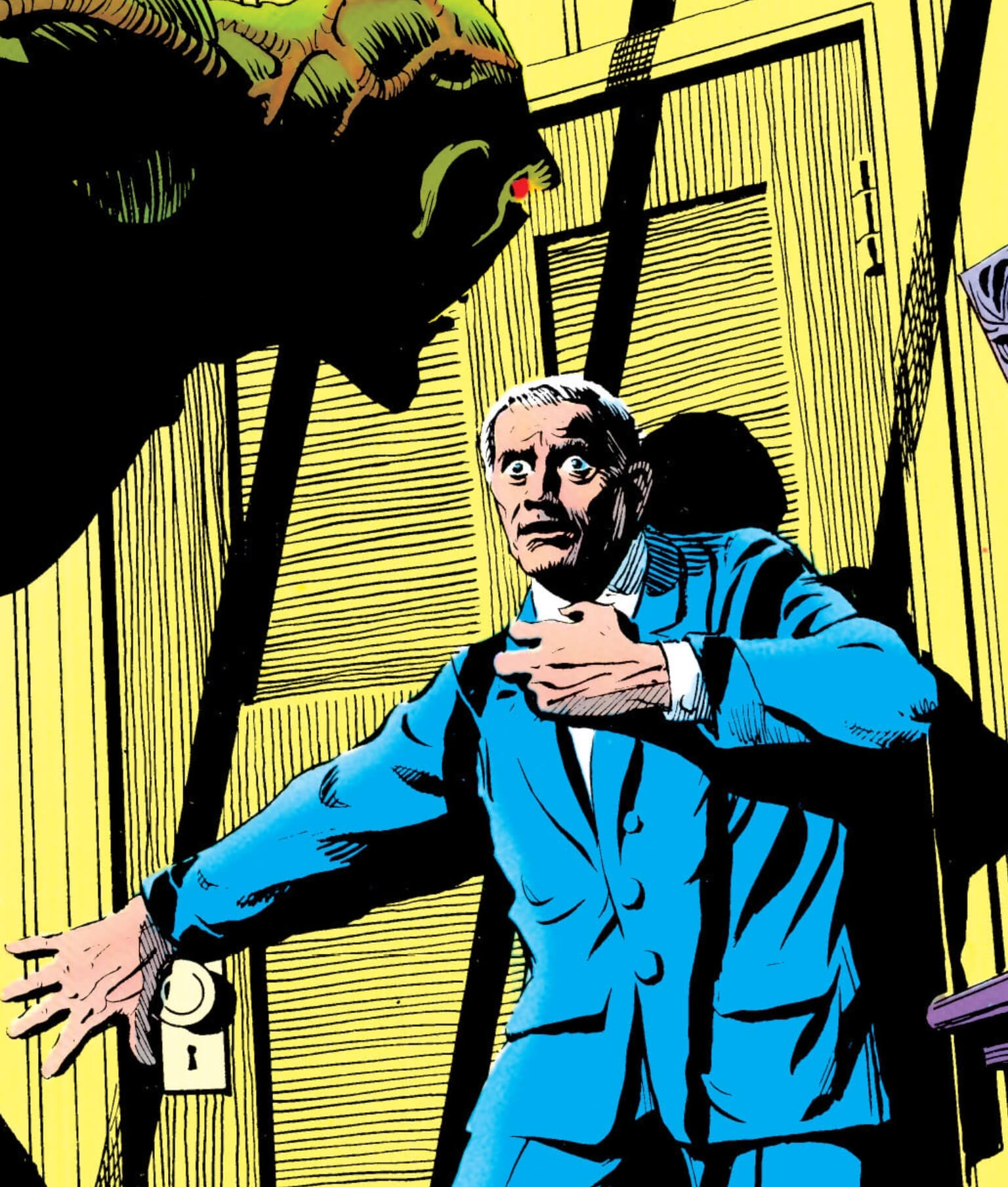 BIO: Avery Sunderland was a retired general in the United States military, who used his training and resources to build the Sunderland Corporation. Sunderland’s empire worked with government agencies, and used the cruelest of methods to prosper in the business world.

FIRST APPEARANCE: The Saga of Swamp Thing (1982) #1 (written by Martin Pasko and penciled by Tom Yeates)

POWERS: Sunderland has untold amounts of money and controls a series of shady corporations with morally dubious people who are loyal to him.

WHY HE HATES SWAMP THING: Like many others, Sunderland was curious about Swamp Thing’s origins and sought to capture or kill the creature in order to study him. Swamp Thing, however, evaded the Sunderland Corporation, and Avery grew concerned he would cause his shady business practices to become exposed. Sunderland’s forces finally overwhelmed and captured the creature, but Swamp Thing had the last laugh when he killed the businessman in a fit of rage in the pages of the classic The Saga of Swamp Thing #21. Avery’s soul was sent to Hell, causing his hatred of the creature to endure for all eternity.

Which Swamp Thing villain do you think is the foulest? Let us know in our Community!