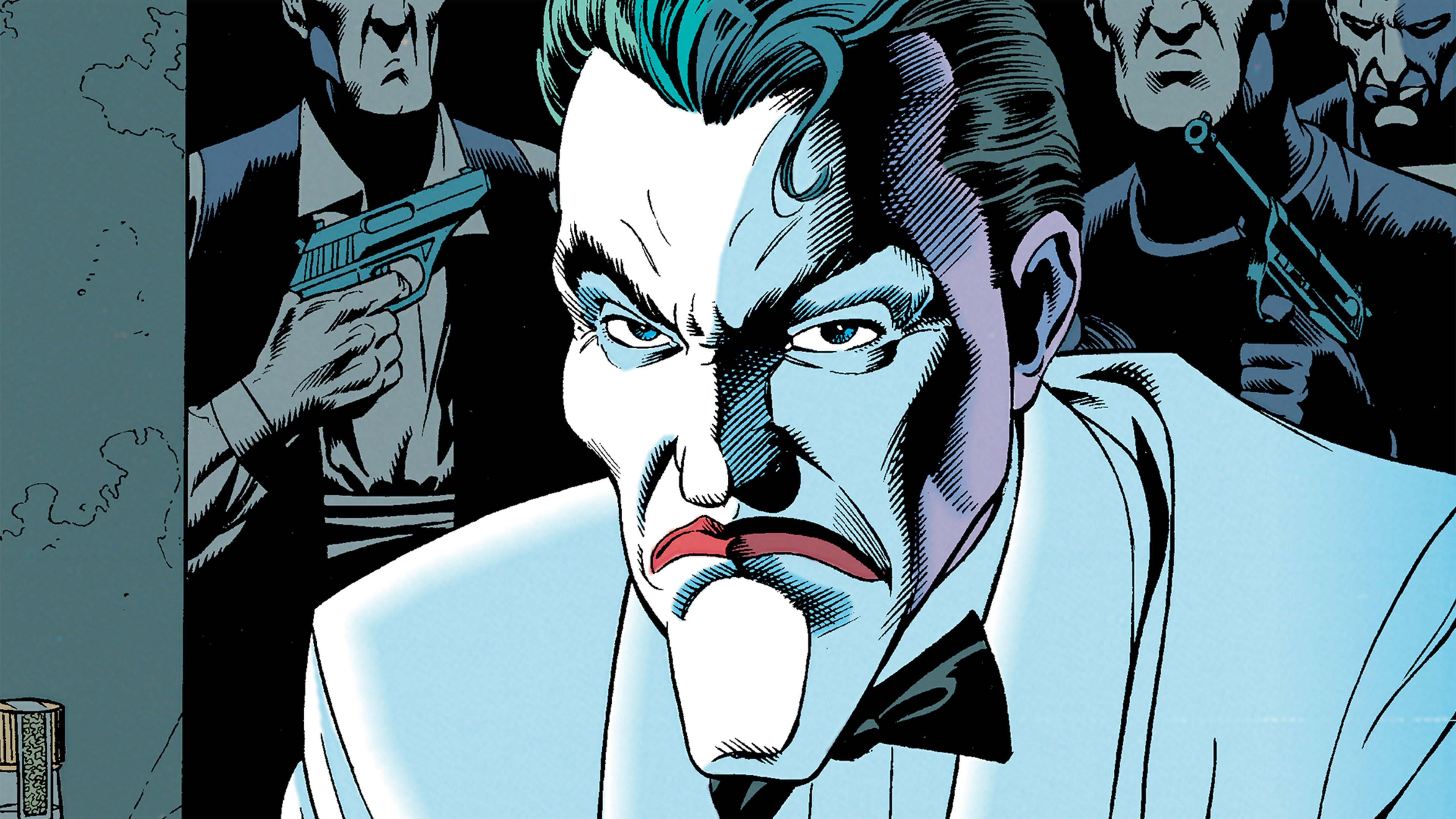 Eighty years ago, in the April of 1940, Batman #1 introduced us to the sinister smile of The Joker. Since that day, Batman’s greatest enemy has been laughing his way through some of the darkest moments in Gotham’s history. Laugh, his philosophy goes, and the world laughs with you… as long as you’re carrying a strong dose of Smilex gas. But not even the greatest of gagmakers can keep up the smiles for 80 years in a row. Some of the most shocking moments in The Joker’s history come when, even to him, the joke is no longer funny. Here are five stories where The Joker got distressingly real.

It’s the unanswerable question, like a zen koan: what would happen if Wile E. Coyote ever caught the Roadrunner? If Sylvester ate Tweety? Or if The Joker… finally killed Batman? In this 1994 storyline, The Joker is lead to believe that the battle his entire life has been leading up to has finally occurred, and he has emerged victorious. But without a Batman to torment, what is Joker left to do? With an entire persona built around a now pointless antagonism, The Joker retreats into the only refuge left for a man without a cause: normalcy. Here, The Joker hangs up his clown shoes and becomes just an average Joe… Joe Kerr. Of course, when Batman turns out to be alive after all, the dormant clown begins to stir once more.

THE WAR OF JOKES AND RIDDLES 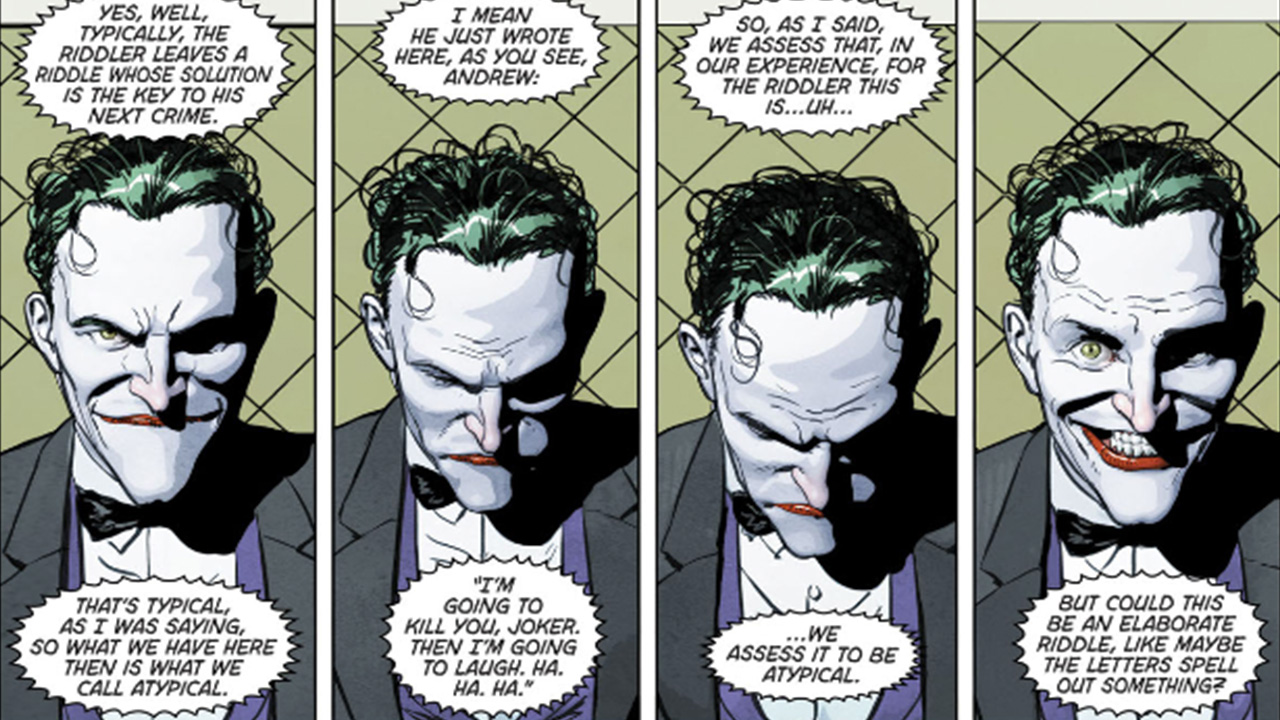 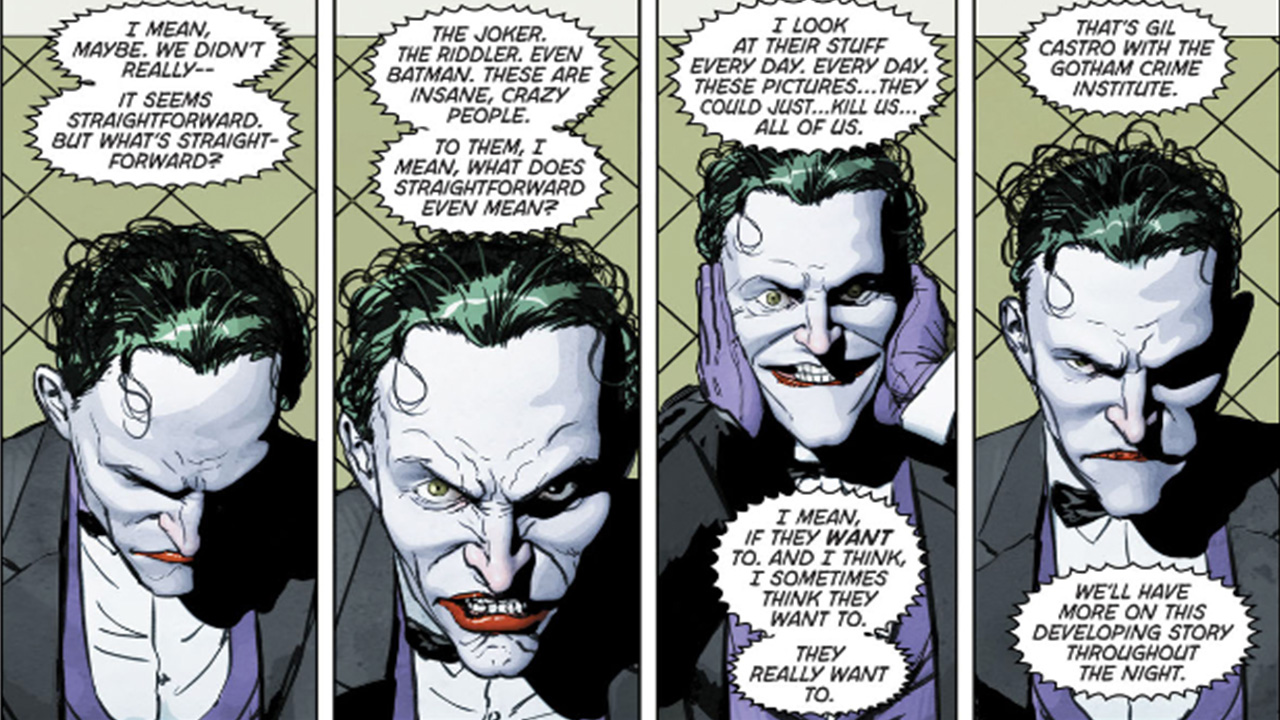 Way back in 1940, Batman #1 introduced The Joker to the world with a simple, horrifying, premise: of a man who loved to laugh, but could only do it when he was killing. “The War of Jokes and Riddles” is the story of a forgotten dark chapter of Batman’s past, when that simply wasn’t enough to get him going anymore. And like any addict, when his drug of choice failed to produce the same high, The Joker was forced to raise the stakes. The Joker organized an all-out war that plunged the entire city into chaos and destruction, all in pursuit of putting a smile back on his face again. As extreme as he got in his escalating campaign against The Riddler, nothing seemed to work… until comedy finally presented itself to him in the unlikeliest of places. Hell yeah. 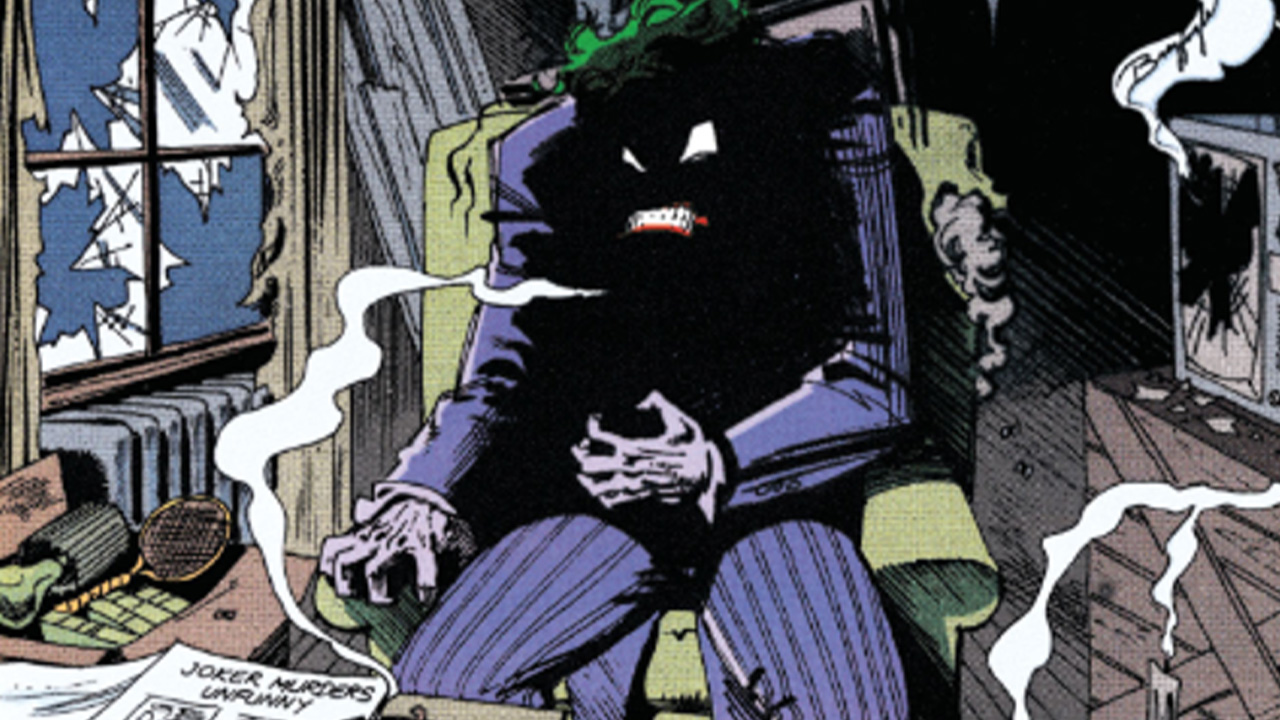 Every diehard Batman fan knows the tragedy of Batman: A Death in the Family. But what happened to The Joker after that? At the end of the original story, The Joker seemingly meets his demise in a helicopter crash… but we all know it’s not that easy to keep a joke down. When did Batman next encounter the man who gleefully murdered his partner? The answer: a year and a half later, in a two-part story by Marv Wolfman for the landmark Batman #450. The Joker we see here may be alive, but his spirit is thoroughly broken. Dead to the world, Joker sequesters himself in a ramshackle hideout, terrified of the world beyond his four walls and the thoughts in his own head. Where once the darkness of the world filled him with cheer, there is only fear. Fear of the outside, fear of Batman, and fear of himself. But fear becomes a luxury he can no longer afford when he learns that an impostor bearing his face is banking on his name and using his shtick to pull a scheme on Gotham… and using it badly. The jokes: awful. The delivery: inexcusable. The death and destruction: joyless. As much as it pains The Joker to get back out there, all he has left is his legacy. And he will NOT be remembered as some HACK. 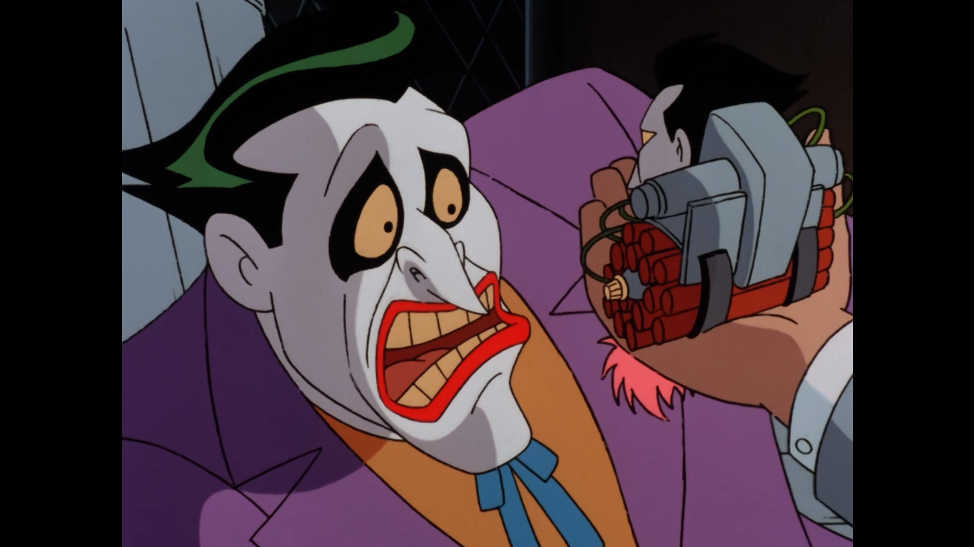 One of the best episodes of Batman: The Animated Series wasn’t really about Batman at all -- it was about Charlie Collins, a poor schmoe who makes the boneheaded mistake of losing his temper on the freeway… at a car that just so happens to have The Joker behind the wheel. Over the next two years, The Joker’s presence looms over poor Charlie like a living nightmare, as he becomes Joker’s new “hobby.” But even an average guy can be pushed to the breaking point. And when the moment comes for his revenge, Charlie wipes the smirk off his tormentor’s face by taking away the only thing he’s ever wanted: a grand finale.

“This is how it ends, Joker. No big schemes. No grand fight to the finish with the Dark Knight. Tomorrow, all the papers will say is that the great Joker was found blown to bits in an alley alongside a miserable little nobody. Kind of funny. Ironic, really. See, I can destroy a man’s dreams, too! And that’s the only dream you’ve got, isn’t it?” 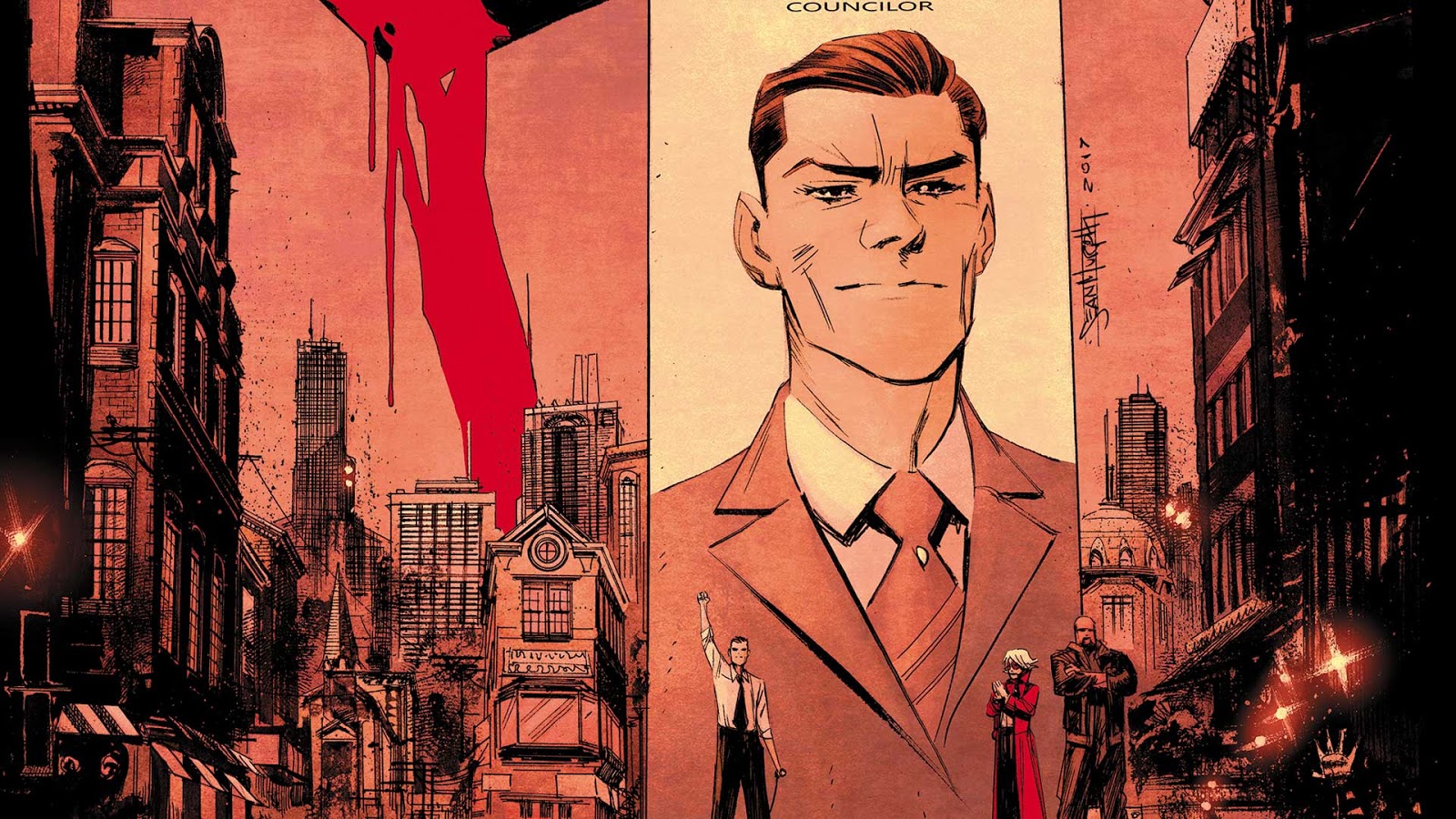 Written and drawn by Sean Gordon Murphy, Batman: White Knight is a Joker story that set the world on fire. Beloved by Gotham, a girl by his side, and triumphant over Batman, Jack Napier- the man called The Joker- has never been higher. So: why is this man not smiling? For the first time, in celebration of The Joker’s 80th anniversary,  you can discover the answer for yourself right here on DC Universe! This week, the whole nine issue story drops for you to read at your pleasure. Just see if it doesn’t put a smile on that face.

Have you ever danced with the devil in the pale moonlight? Talk about it in our Community!